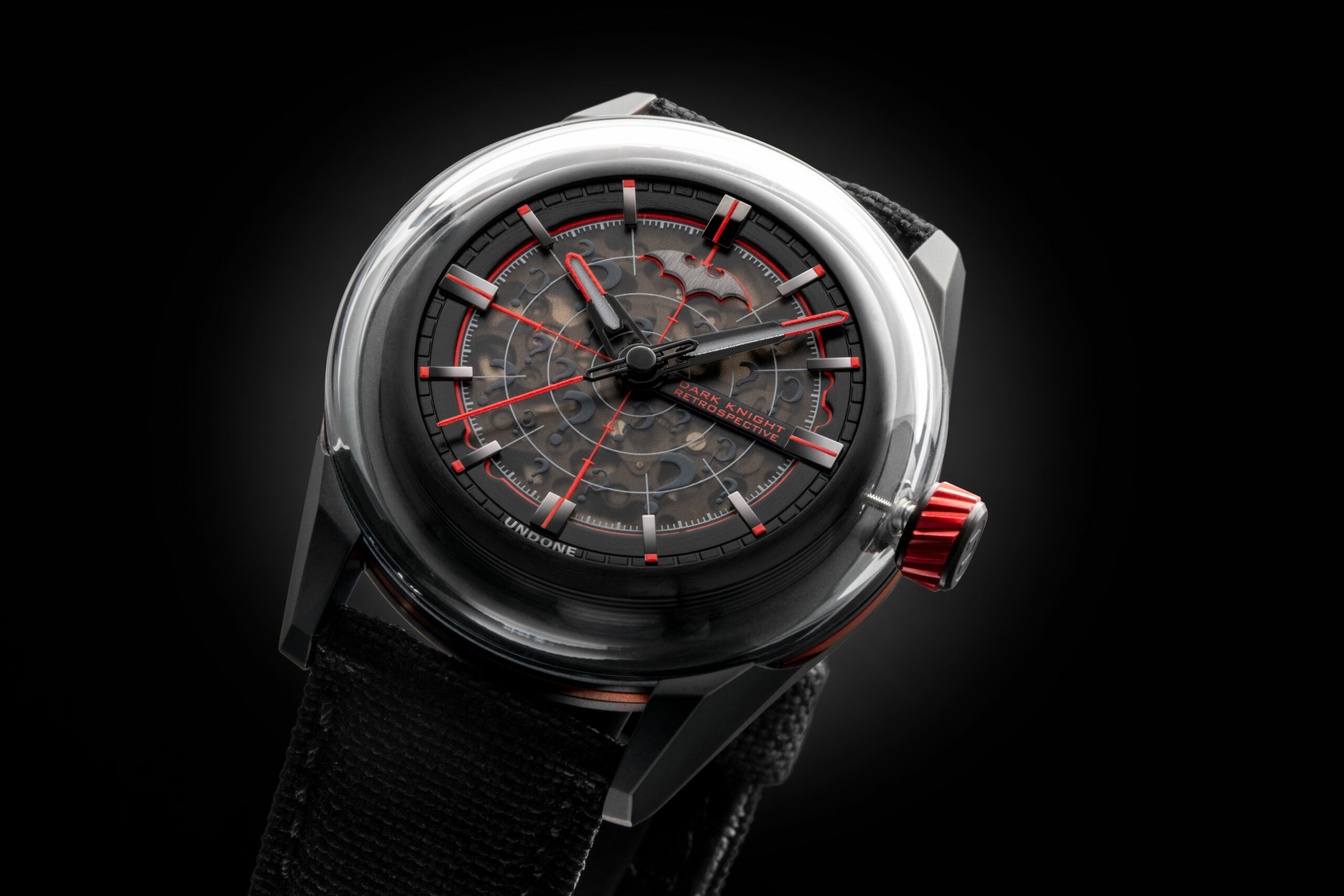 Sponsored post presented on aBlogtoWatch for advertiser
Since its founding in 2014, UNDONE has built its name on offering personalized and customized watches, many of which feature vibrant color schemes and playful designs. The premise of the brand is a fun one; it’s a breath of fresh air in a hobby that can sometimes feel somewhat exclusive or intimidating to novices and outsiders. Much of the Undone collection consists of designs inspired by some of our favorite cartoon and comic book heroes, such as Popeye, Snoopy, and Astro Boy. Undone’s latest character-inspired watch, the Dark Knight Retrospective, is its third Batman-themed release, following the Batman 80th Anniversary Collection released in 2019 and the Quantum Batman released in 2020. 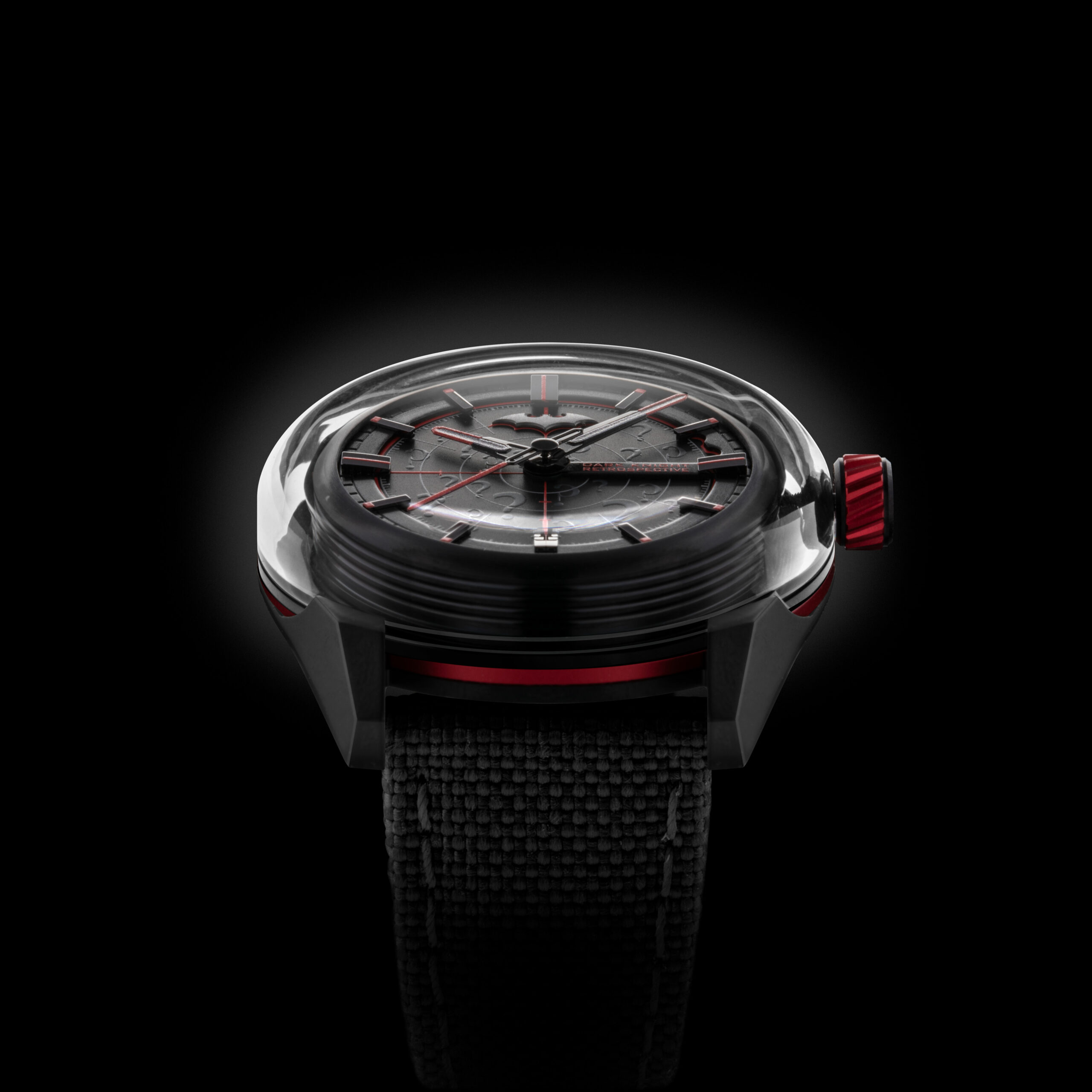 A fitting choice for watch collectors and Batman fans, alike, the Dark Knight Retrospective sports a design that takes cues from the 1960s Batmobile. A modified black Ford Lincoln Futura, the 60s Batmobile had a sleek, stealthy appearance highlighted by red accents. The timepiece fittingly captures the spirit of the vehicle, with a black DLC-plated stainless steel case measuring 42mm and red accents marking the dial and crown — a thoughtful nod to the crimson pinstripes of the Batmobile. The curved anti-reflective crystal is meant to mimic the bulletproof windshield found on the Batmobile, while the black aluminum chapter ring echoes the appearance of tire tread. 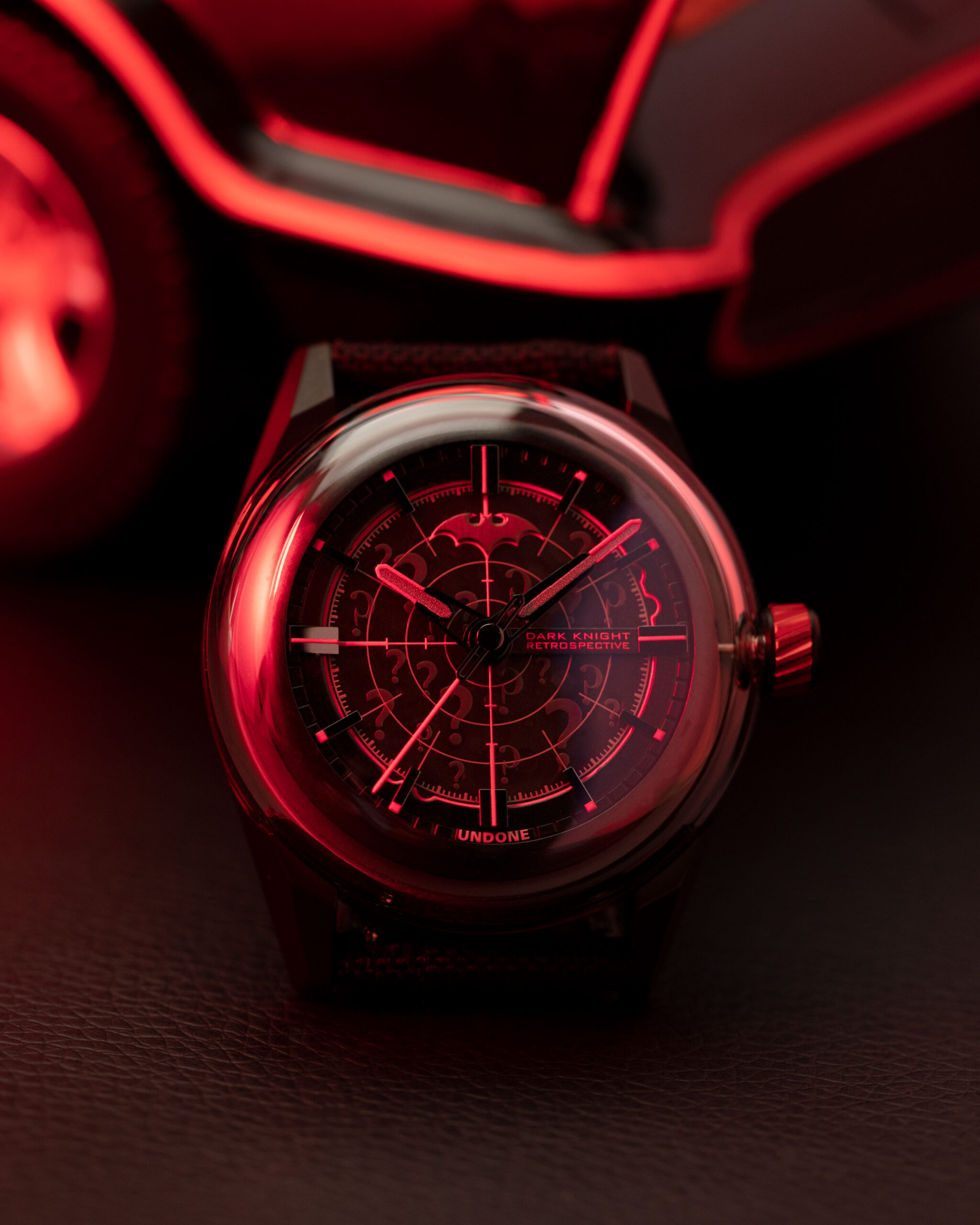 Those familiar with the 60s Batmobile might also remember the “Detect-A-Scope” found on the dashboard of the vehicle — a red radar machine used by Batman to monitor the movements of his enemies. The design of the Dark Knight Retrospective channels the “Detect-A-Scope,” featuring bright red crosshairs and raised indices, as well as an open-worked dial revealing a skeletonized movement beneath. Altogether, the domed crystal, applied markers, and semi-transparent dial surface make for a dynamic yet streamlined overall appearance. It also carries the energy of something that the Dark Knight himself might wear on his wrist. 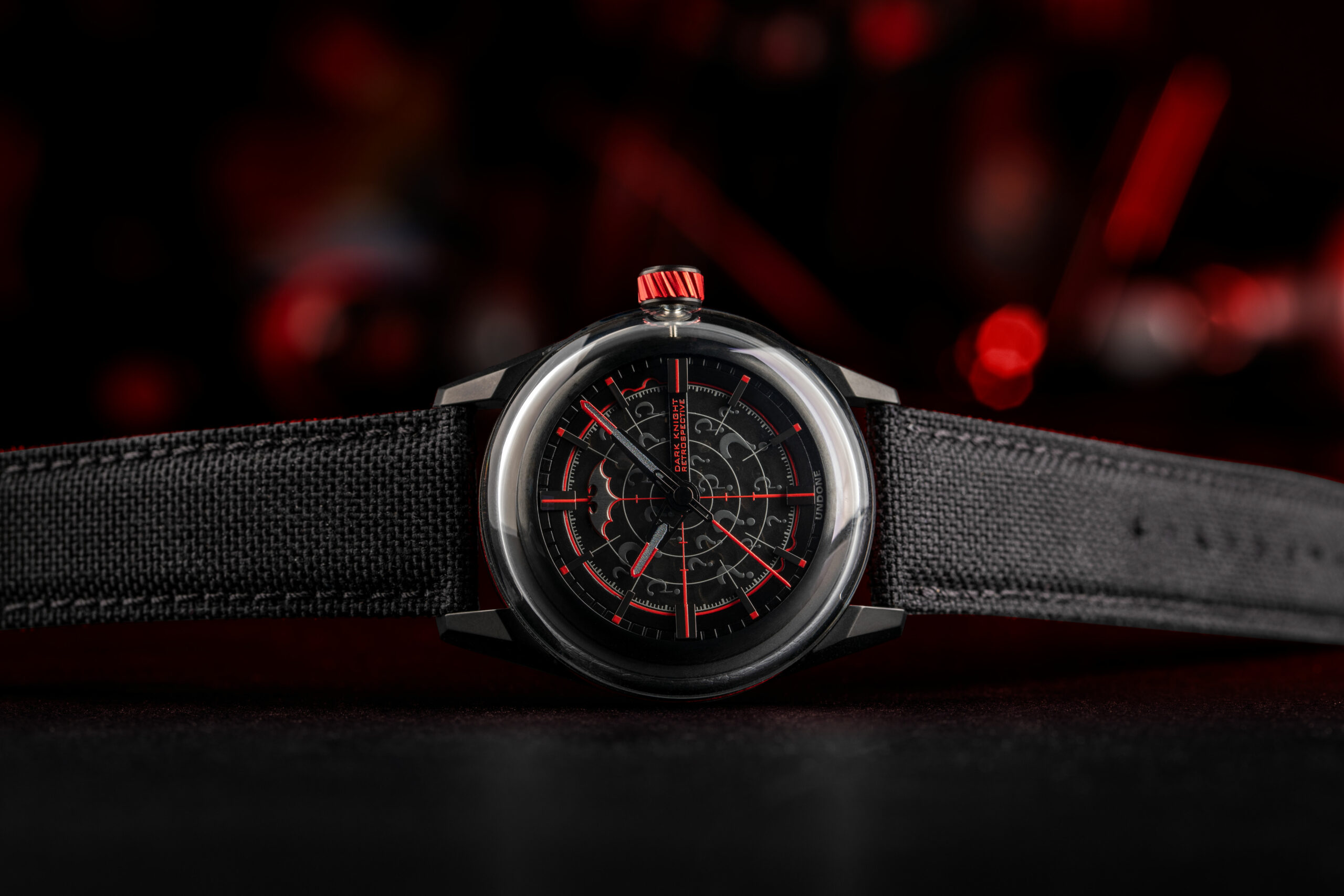 While UNDONE’s first two Batman-themed releases – the Batman 80th Anniversary Collection and Quantum Batman — were inspired by Batman’s dual personality and formidable gadgetry, respectively, the Dark Knight Retrospective draws its thematic inspiration from the fight between good versus evil, or dark versus light. More specifically, it’s inspired by the fight between Batman and one of his most famous adversaries: the Riddler!

As fans are aware, the Riddler takes pride in incorporating elaborate riddles into his evil schemes. The dial of the Retrospective is marked by the Riddler’s signature question marks, which illuminate a bright shade of green in the dark. This symbolizes that night has arrived, and the Riddler has come out to play. This is a particularly interesting use of luminescent material, one that enhances the design while also serving as a thoughtful nod to fans of the comic book series. 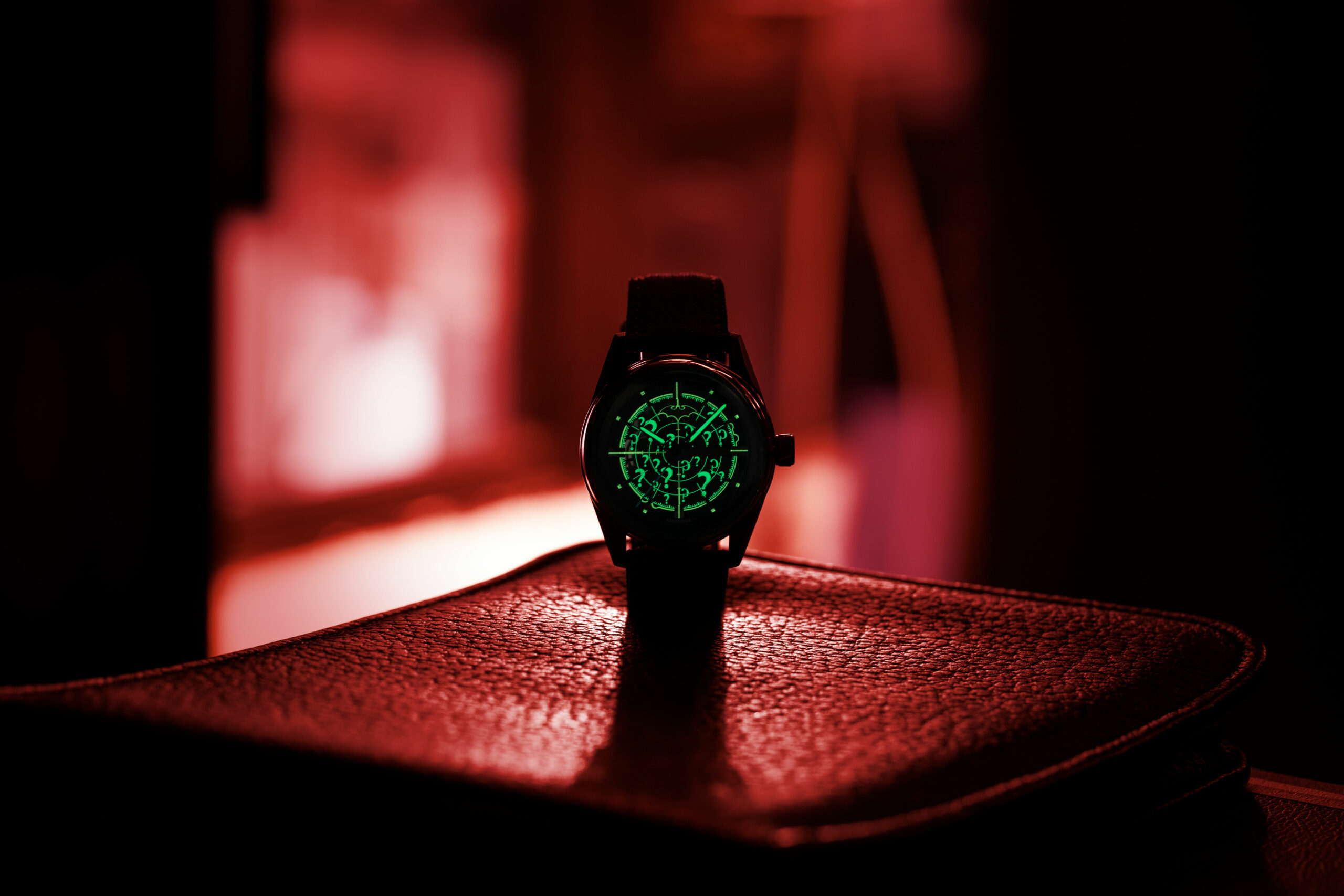 Under the hood of the Dark Knight Retrospective is Seiko’s caliber NH72, a ruthenium-plated automatic movement that beats at 21,600 vph and features 42 hours of power reserve. The movement is visible through a tinted transparent crystal caseback that is adorned with a red silhouette of the Batman logo, another nice design touch and a suitable choice for this watch given its reliability and affordability relative to other widely available skeleton movements. 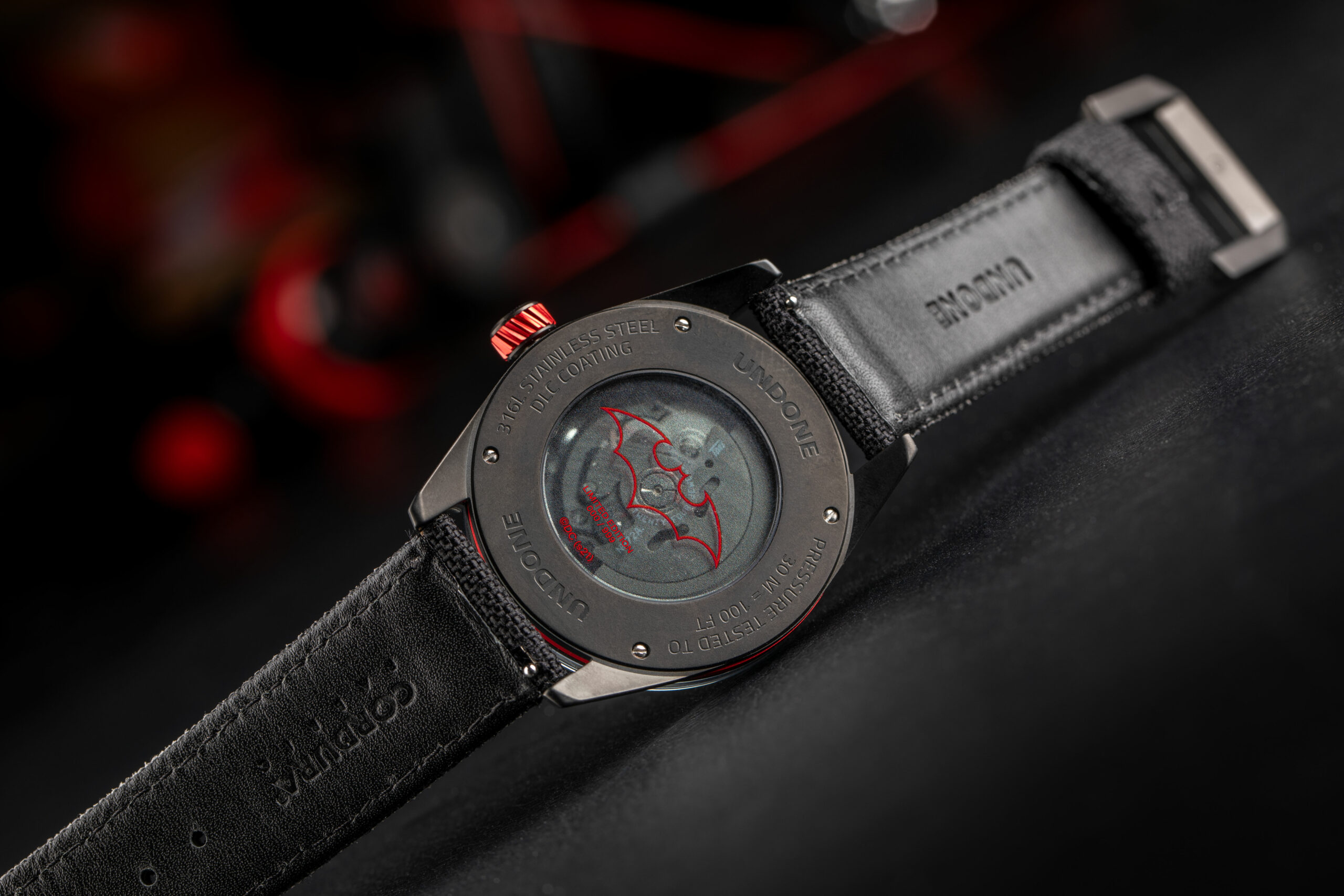 A fun, thoughtfully designed tribute to the Caped Crusader, the Dark Knight Retrospective is suitable choice for both watch collectors and comic book fans. It will be produced in a limited run of 999 pieces and carry a price tag of just $499 USD. Learn more or order at the Undone watches website here.