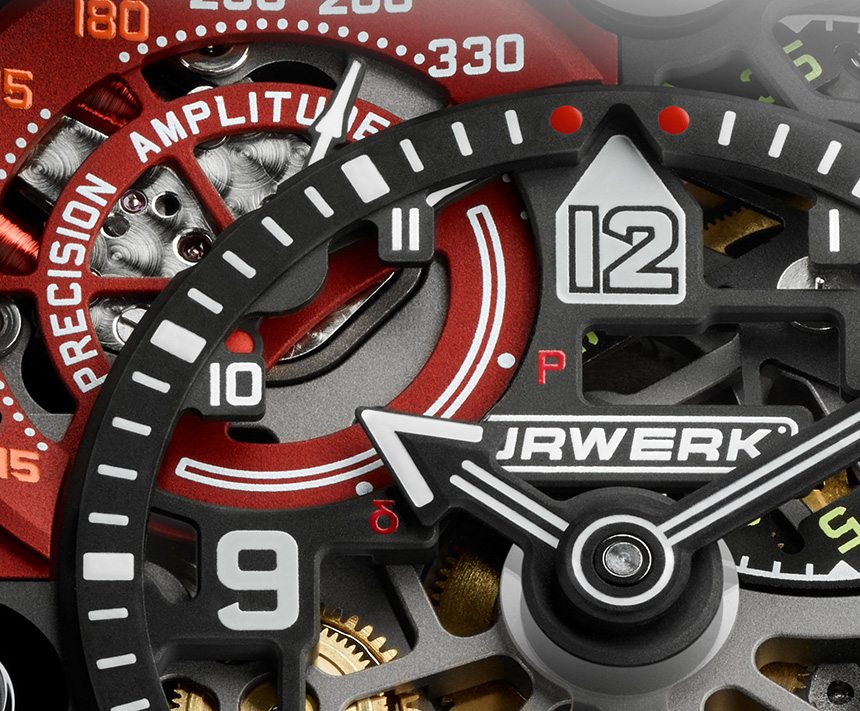 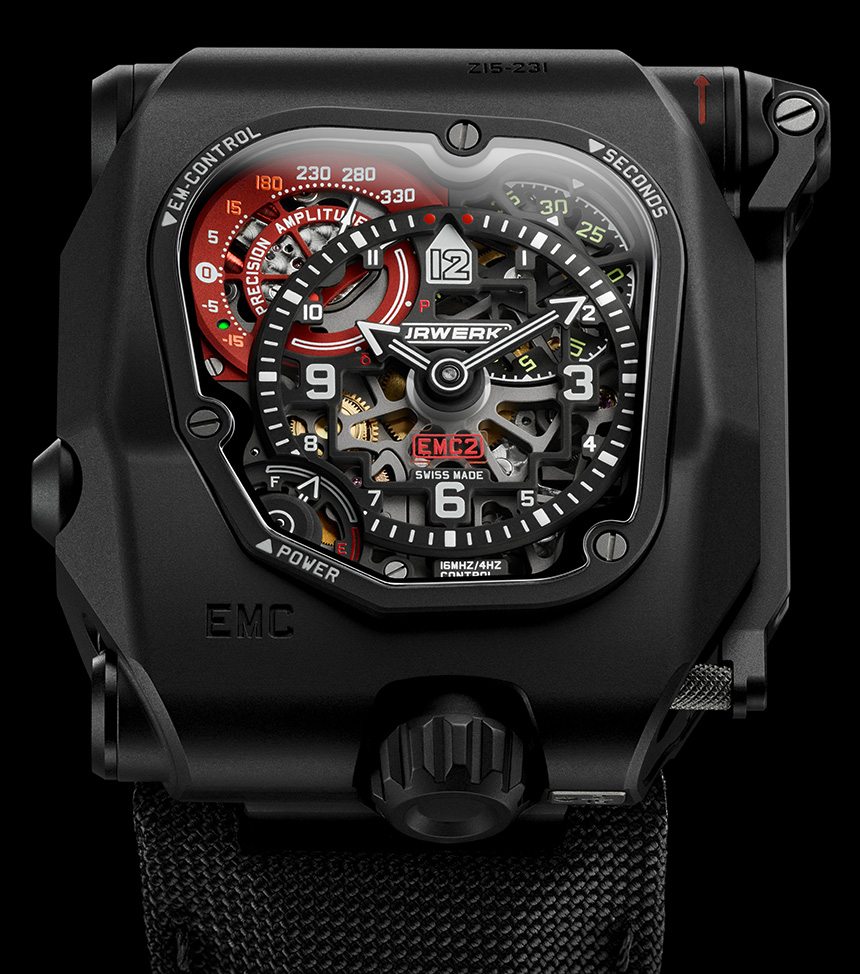 When Urwerk released their EMC watch in 2013, many were dubious as to whether it was a serious watch or not. Those fears were set aside once we got to check out the Urwerk EMC watch in person, and we felt the same whimsical fascination with the follow up, the Urwerk EMC Time Hunter watch. Featuring a fold-away winding crank on the side that you wind to charge a super capacitor, the Urwerk EMC TimeHunter allows you to monitor the watch’s accuracy with a precision monitoring device as well as monitoring balance amplitude. It looked very cool there in Camo Green, but the new Urwerk EMC Time Hunter X-Ray is so named because of its skeletonized dial which affords a look inside its fascinating mechanics. 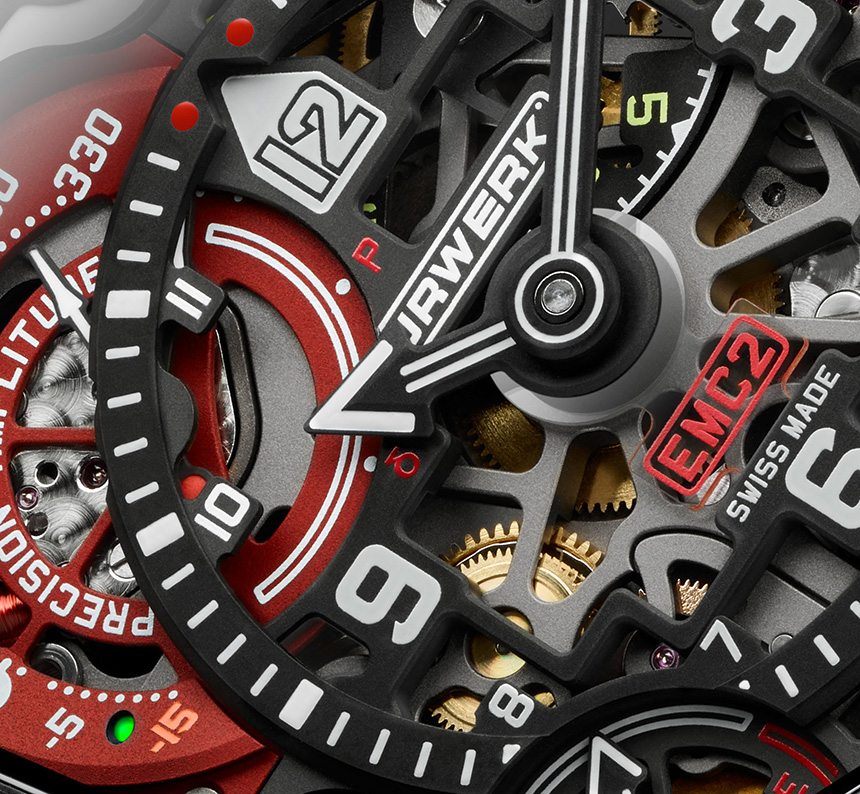 To give the wearer complete control, the Urwerk EMC TimeHunter had to introduce electronic elements to a classically mechanical movement – EMC standing for Electro Mechanical Control. Now, before the horology purists start crying foul, think of the Urwerk EMC TimeHunter’s movement as a traditionally beating heart with an electronic stethoscope permanently wired to it to measure its health in real-time. Being a fully mechanical movement, the energy for the “stethoscope” is separate and not derived from the movement itself, in the manner a Seiko Spring Drive movement might be. Instead, Urwerk has incorporated a miniature hand crank that deploys from the 3:00 side of the case, which, after a few spins, fully charges up the capacitor that powers the electronic rating module at 11:00. Now, unlike an ordinary battery, this capacitor was built by the same firm who engineered the miniature technology to power the Mars rover – ensuring it can be recharged between 100,000 and 200,000 times. Because, obviously, if it’s good enough for NASA, it is definitely good for Urwerk. 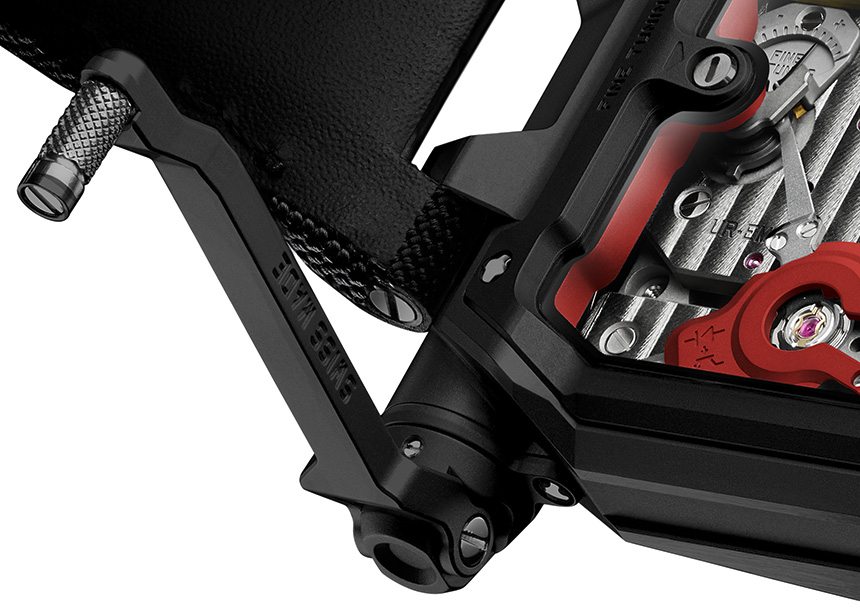 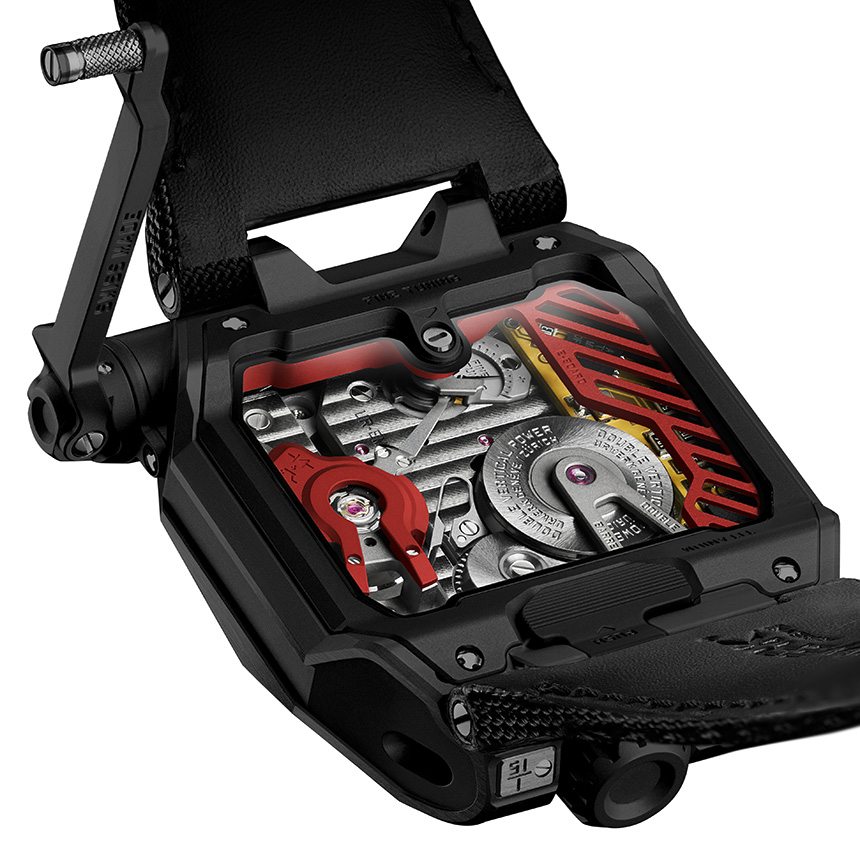 Once powered, a quick button press at 8:00 activates the optical reader module which first indicates the rate ± 15 seconds a day, then after a brief pause, the current amplitude of the balance. If the watch is performing within acceptable tolerances for accuracy, a green LED on the module will light up, providing easy visual confirmation that everything is running as it should. 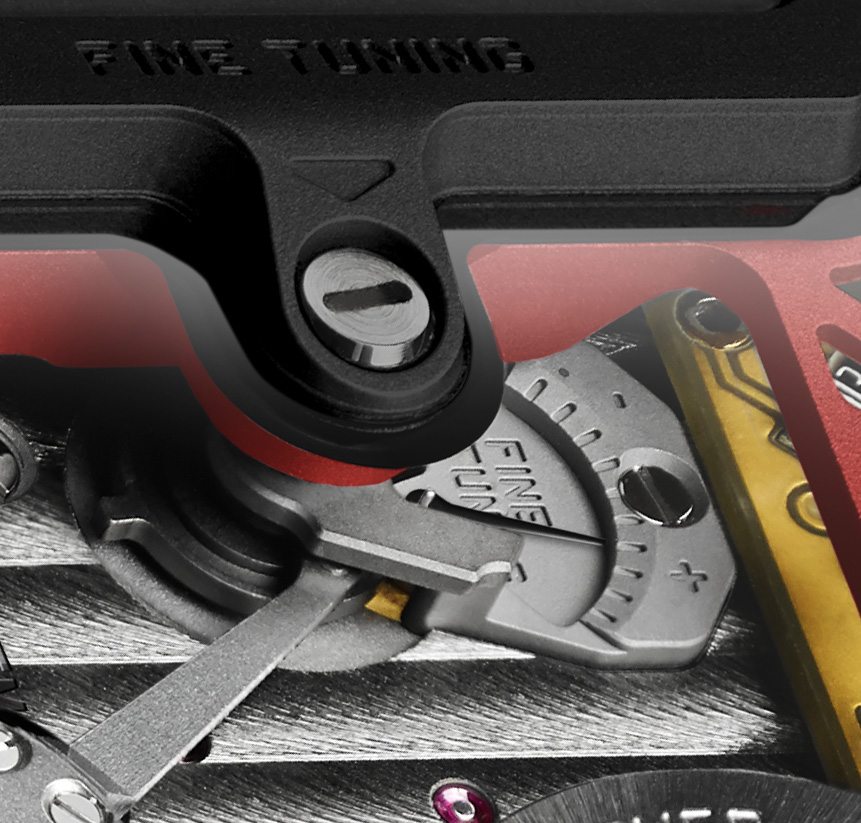 But the ability to measure outside influences on a watch’s accuracy in real-time is only half of what makes the Urwerk EMC TimeHunter X-Ray special. Urwerk also wanted to equip its wearers with the tools to adjust the watch as needed – so on the back, you’ll find an adjustment screw connected to the fast/slow index on the balance, essentially enabling you to perform what normally only trained watchmakers can do – and saving yourself the 6 – 8 week service turnaround. Just a few manual twists of the screw changes the effective length of the balance spring, regulating the rate and keeping the watch running in-line with your wearing proclivities. 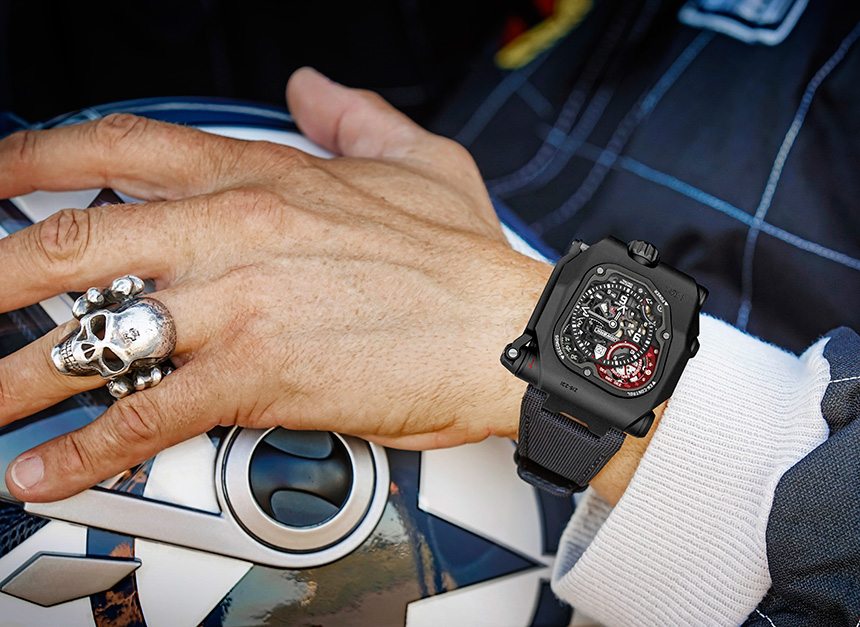 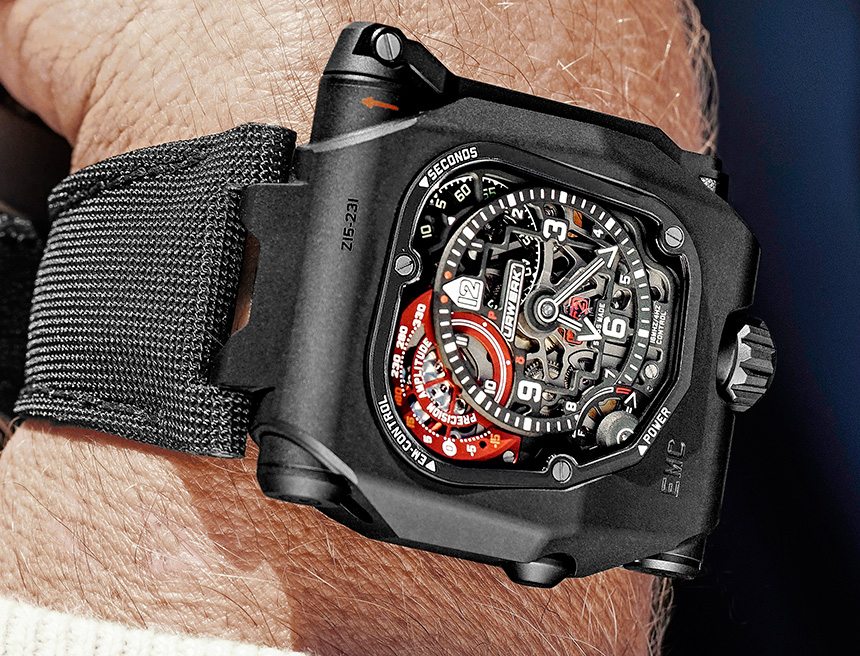 The movement in question being measured and adjusted is the Calibre UR-EMC – a manual-winding movement designed and manufactured by Urwerk with a Swiss lever escapement. It’s equipped with two stacked mainspring barrels yielding a healthy 80 hours of power, whose reserve is the third indicator on the dial at 7:00. Everything is sandwiched between two sapphire crystals and packaged up inside a 43 x 51mm grade 5 titanium case that’s been brushed, shot-peened, and PVD-coated for a smooth, ultra-stealthy finish that neatly contrasts the watch’s inner workings. 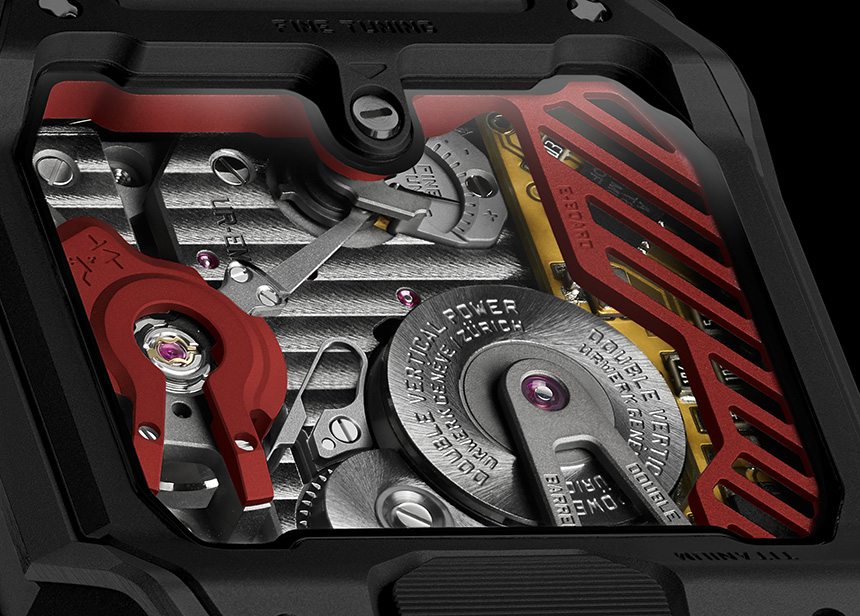 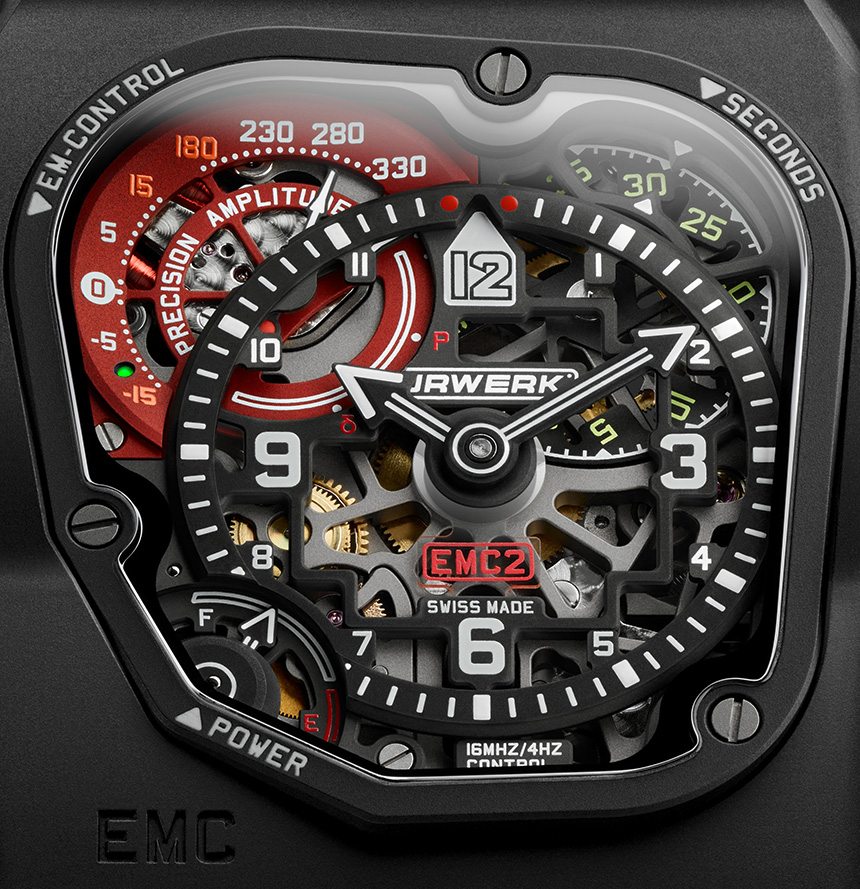 Given that the overarching theme of the TimeHunter is to bring the wearer closer than ever before to these mechanical marvels we obsess over, it makes plenty of sense for this particular release to get the full X-Ray treatment, for an unprecedented front row seat to its own chronometric performance. As par for the Urwerk course, the Urwerk EMC TimeHunter X-Ray will be produced in extremely limited numbers – only 15 pieces for this variant, each with a price of CHF 125,000. urwerk.com