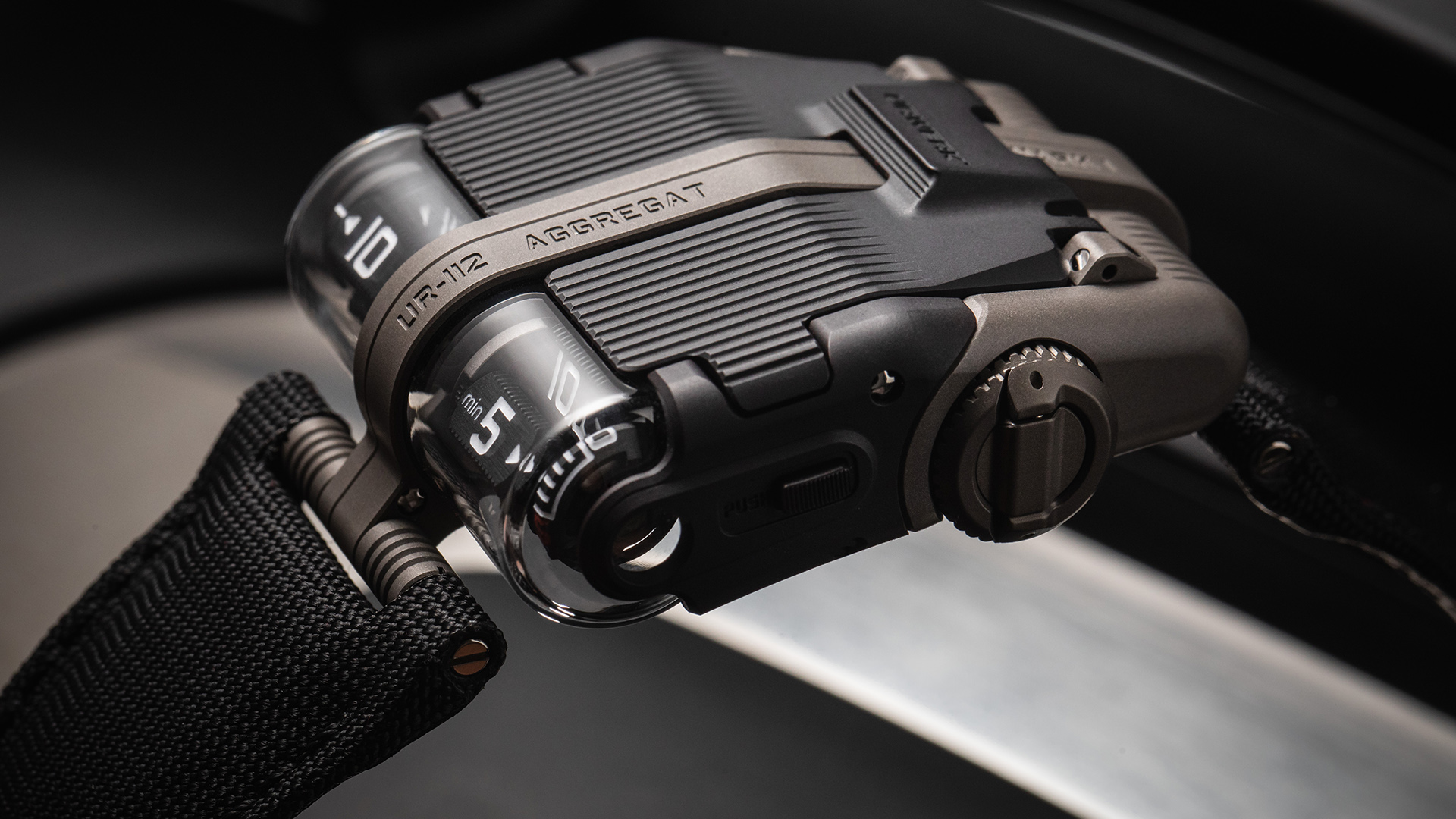 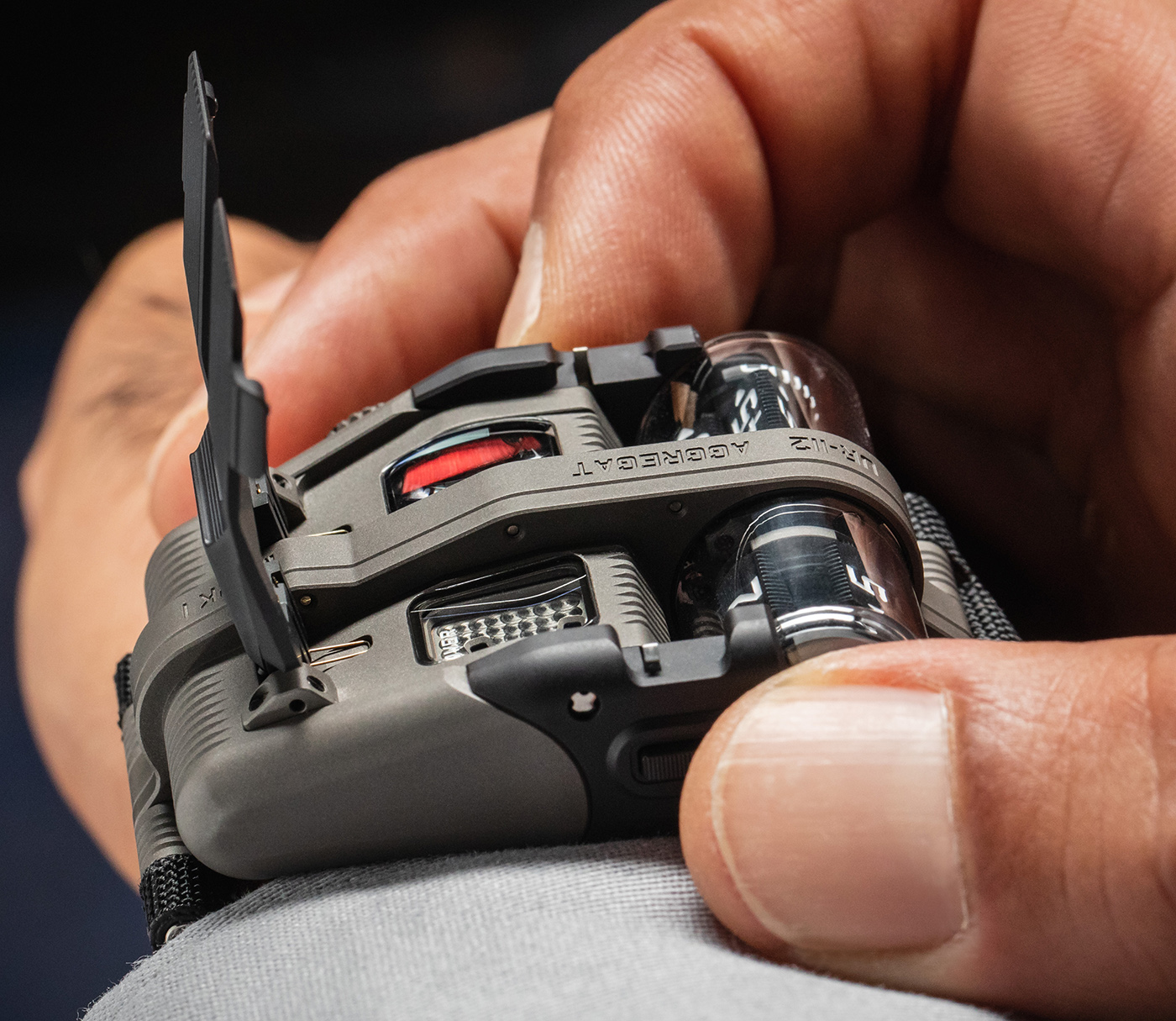 Even in the wild and fanciful world of haute horlogerie, few brands commit as heavily to bringing the look of the future to modern mechanical timepieces as Urwerk. This creative, sci-fi inflected design philosophy has paid hefty dividends since the brand was founded in 1997, but the task of creating the aesthetic of the future comes with a responsibility to keep creating new ideas. Urwerk’s latest all-new design inverts and expands its calling-card satellite hours concept, creating a unique hunter-cased design that would feel every bit at home on Yavin 4 or Arrakis as it would here on Earth. The new limited edition Urwerk UR-112 Aggregat offers one of the brand’s boldest visions of the future to date, and pioneers some genuinely fascinating new horological concepts. 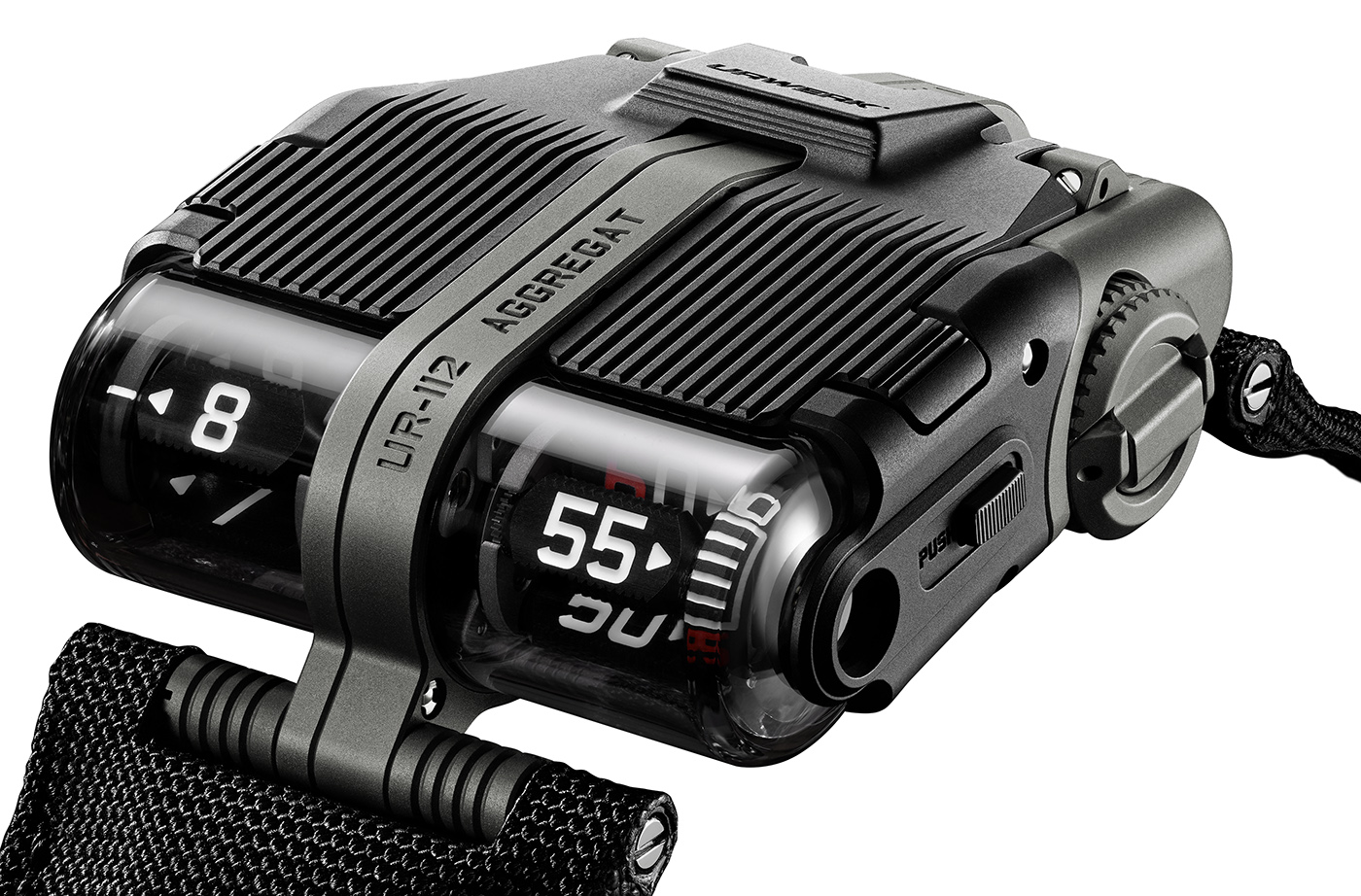 Measuring in at 42mm-wide, 51mm-long, and a considerable 16mm-thick, the titanium case of the Urwerk UR-112 Aggregat is a radical departure from typical watch case designs even by the brand’s own eclectic standards. The sloping, wedgelike, vaguely rectangular form is rife with unorthodox flourishes and intriguing details, and Urwerk’s decision to render the matte blasted form in black and warm graphite gray helps to highlight these intricacies in images. Viewed from above, the case’s main focal points are its strongly raised central ridge and a hinged section in black with a sharp grooved texture. Although far removed from its usually classical stylistic context, this opening segment is technically a hunter caseback. By pressing down twin pushers along the 3 o’clock and 9 o’clock sides of the case, this cover swings open, revealing a pair of squared-off sapphire display windows showcasing the movement, the seconds subdial, and the power reserve indicator. It’s a deeply original creative move that both streamlines the look of the case in its regular position and should add a hefty dose of visual theater on the wrist. The T-shaped lugs help to give this hefty geometric case a sense of sci-fi floating lightness in initial images, while the folding D-ring crown is semi-recessed into the case along the 3 o’clock edge. The  pair of cylindrical sapphire crystals at 6 o’clock display the timekeeping elements with futuristic panache in initial images, while the gentle curve of the reverse side of the case should help this watch wrap comfortably around the wrist. While this out-of-the-box, multi-part case construction is visually striking, Urwerk’s ability to maintain sporty performance with such an unorthodox from is worth mentioning as well. The brand rates the UR-112 Aggregat for a solidly durable 100 meters of water resistance. 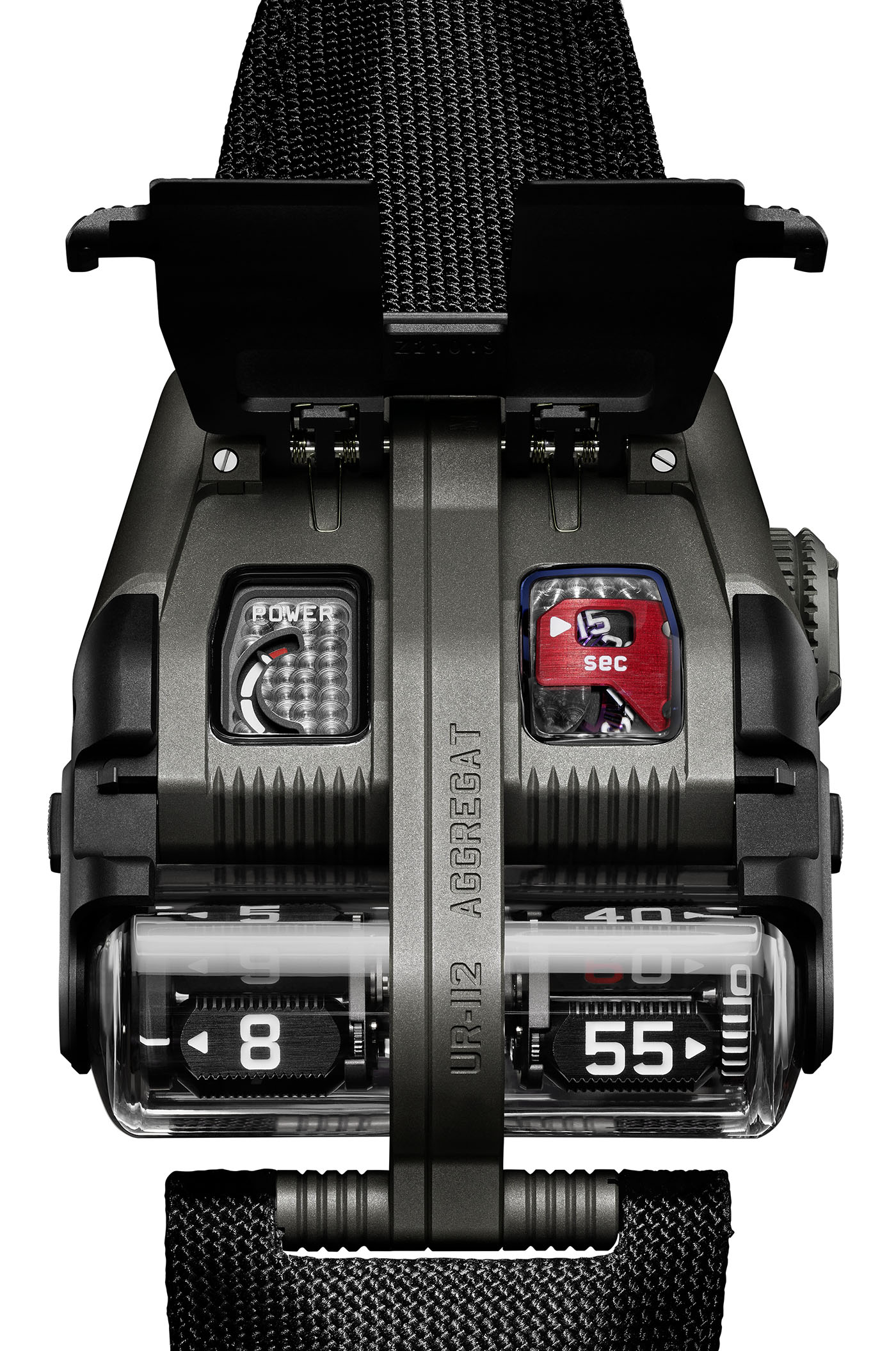 The Urwerk UR-112 Aggregat does not have a dial, in the traditional sense. Instead, main timekeeping functions are handled in the twin barrel-like sapphire crystals at 6 o’clock, where Urwerk adapts and evolves its familiar satellite hours complication to new heights of complexity. Hours and minutes are marked off by a set of revolving notched black triangular prisms on a planetary gear system. For the minutes display, each prism is gradually replaced by the next over the course of five minutes, and a boldly graphic white lumed scale and corresponding arrow lets wearers determine the exact minute past the currently displayed engraved Arabic numeral. By contrast, the hours display is cleaner and simpler to understand at a glance. With only a single orienting line and arrow to contend with, it’s intuitively clear what the current hour is in static images, but Urwerk ensures this remains easy to read at any point in the hour thanks to an added mechanical flourish – a jumping hours mechanism. The overall presentation is clean, high-contrast, and utilitarian to help ease the confusion of reading these offbeat subdials, but with enough aggressive ultramodern character to avoid feeling sterile in images. The seconds subdial, hidden underneath the hunter-style hinged case lid, uses an equally dramatic twist on the standard seconds hand with a parade of moving Arabic numerals etched on silicon wafer discs moving into a strongly brushed and anodized red display window. This keeps the digital timekeeping theme of the rest of the design intact in images, and to make these tiny moving numerals legible the entire crystal atop this subdial acts as a magnifier. In comparison to the rest of the design, the power reserve subdial is far more conventional, with a simple retrograde needle atop a gauge-like minimalist graphic scale. This multi-aperture layout may be confusing to some, and it’s undeniably complex, but in initial images it effectively pushes forward the design concepts of previous Urwerk models. 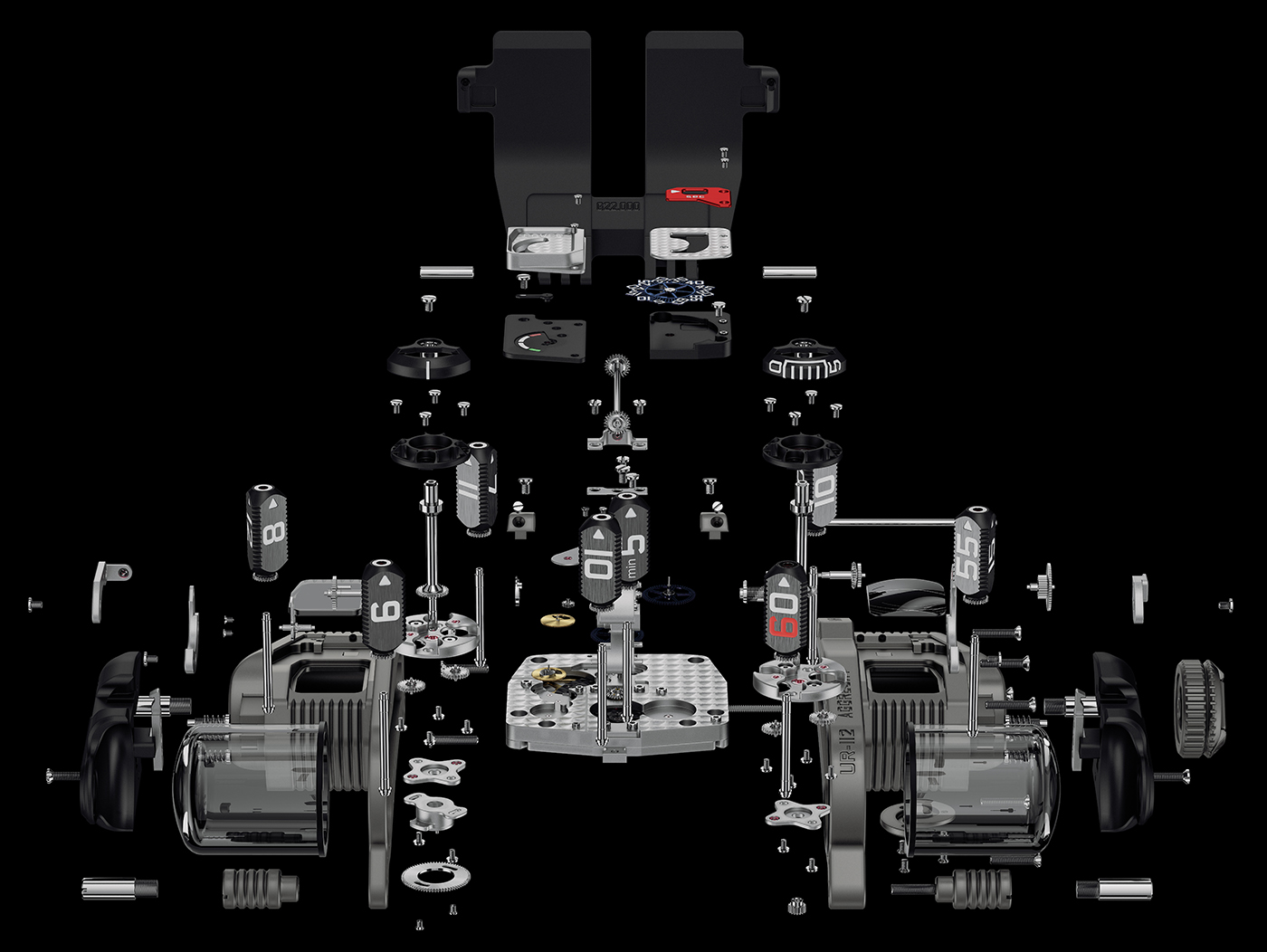 The proprietary UR-13.01 automatic movement inside the Urwerk UR-112 Aggregat is every bit as left-field and imaginative as the rest of the design, but the base performance numbers might mask this somewhat. Although on paper the 48 hour power reserve at a 28,800 bph beat rate may not sound up to par in this ultra-luxe market segment, in order to appreciate what Urwerk has done with this movement one needs to consider the layout of the design. This is far from a traditional gear train, and in some ways has more in common with an automotive drivetrain than a typical mechanical watch movement. To facilitate the unusual shape and planetary gear display, the single mainspring barrel is connected to the hours and minutes display by an automotive-style perpendicular driveshaft, complete with a differential at the end. The other consideration for this unorthodox system is torque – essentially every design choice here, from the displaced hours and minutes displays, to the heavy revolving prisms, and the fast-moving silicon seconds discs, is far more power-hungry and demanding on a mechanical movement than a conventional three-hand layout. To preserve every drop of energy from the single mainspring, Urwerk turns to another modern automotive technology – kinetic energy recovery and regenerative systems. In short, Urwerk uses the complex motions of the satellite minutes display to power the sharp and high-torque jumping action of the hours prism by storing some of the past hour’s accumulated force in the planetary gear train and releasing it in a burst to advance the hours display. Although much of the movement itself is hidden from view beyond a set of perlage plates, the conceptual creativity behind the UR-13.01 movement lends its own kind of visual drama. Urwerk finishes the UR-112 Aggregat with a ruggedly simple tapering black textile strap, preserving the tough and sporty character of the design while keeping the focus squarely on the case in initial images. 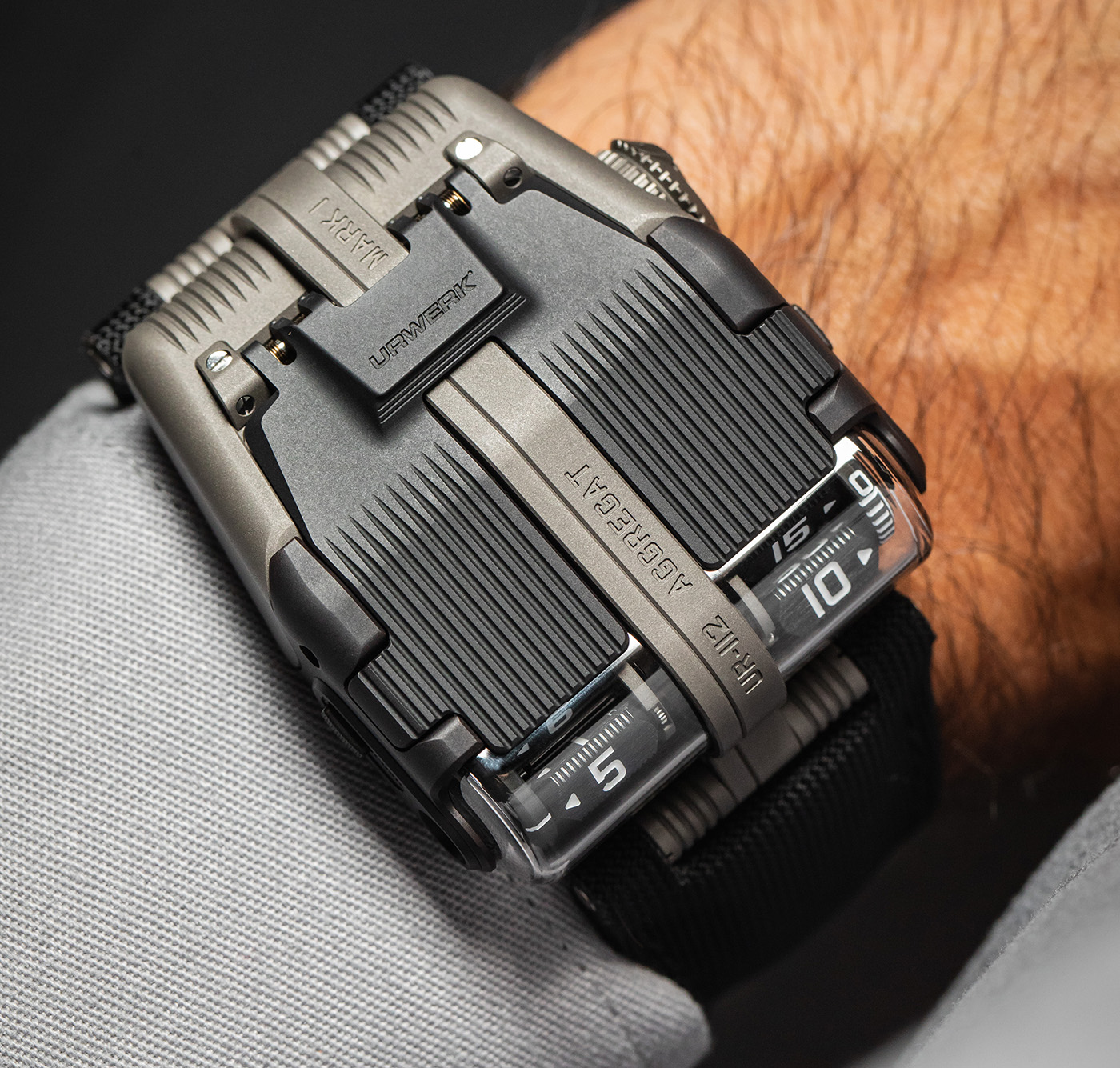 Although the otherworldly design decisions behind the limited edition Urwerk UR-112 Aggregat will not appeal to all tastes, the sheer creativity, mechanical prowess, and futuristic thinking behind this all-new design effectively rings in a new generation of the brand’s avant-garde creative philosophy. Only 25 examples of the Urwerk UR-112 Aggregat will be made, and the watch is available now through authorized dealers at an MSRP of 250,000 CHF. For more details, please visit the brand’s website.