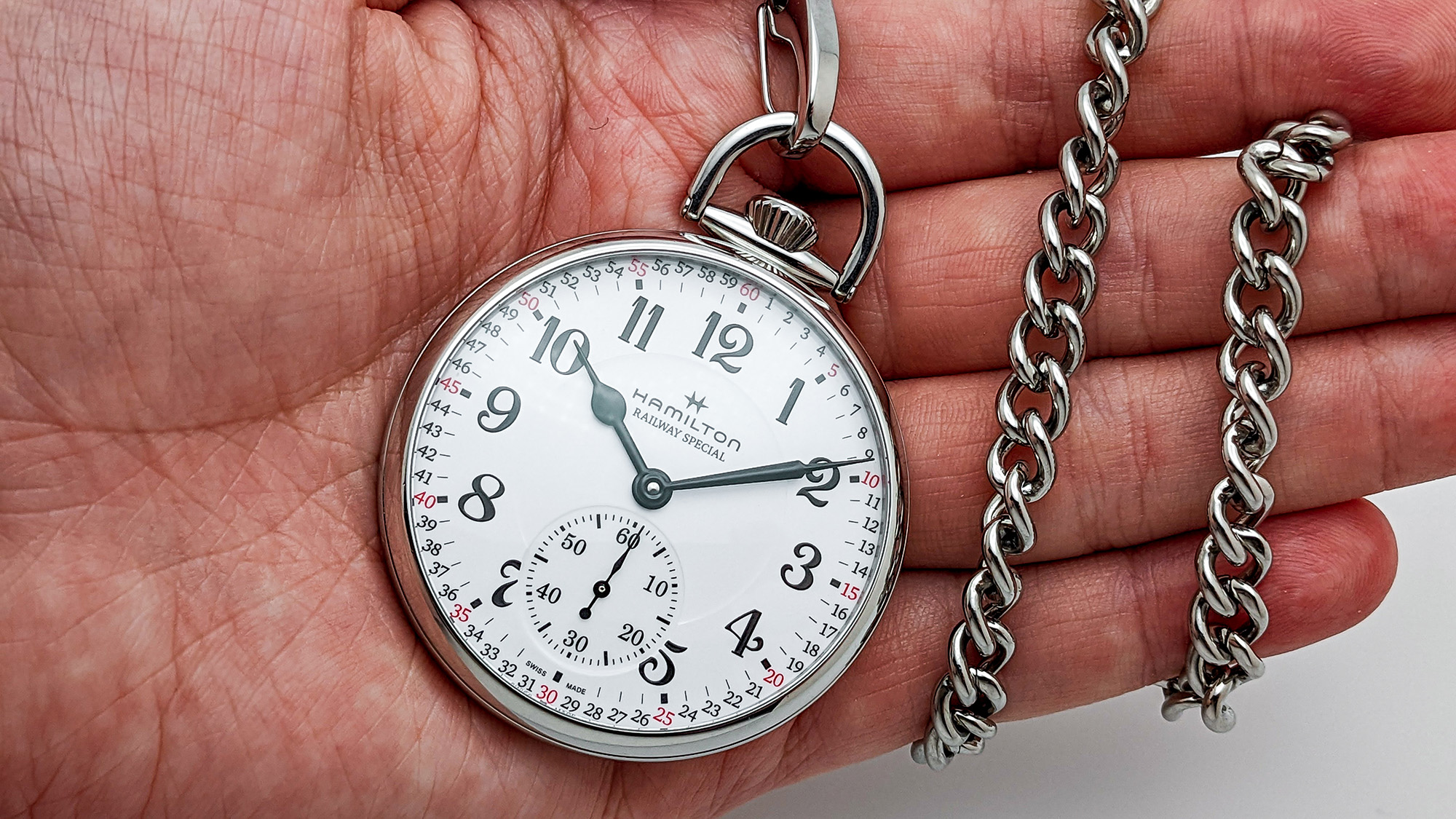 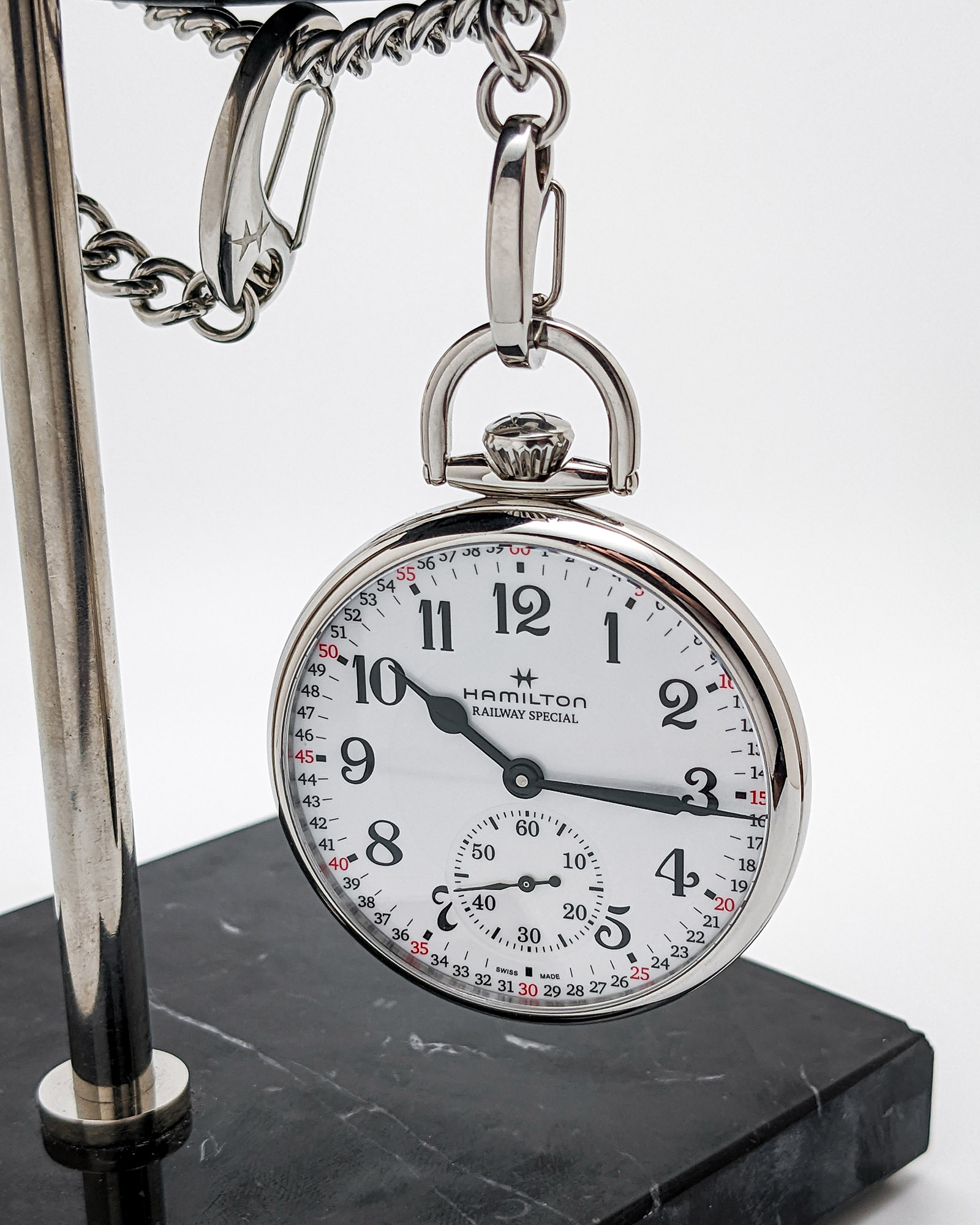 Although America’s position in watch manufacturing is more or less relegated to the past, there are still several brands that still trace their legacies back to the United States, and among these, perhaps no other is as proud or as influential as Hamilton. 2022 marks the 130th anniversary of Hamilton’s founding in idyllic Lancaster, Pennsylvania, and amid a year of commemorative designs and explorations of its heritage, the brand’s premiere new offering celebrates where it all began — with a pocket watch. While pocket watches may not be in vogue, the new limited-edition Hamilton Railroad Pocket Watch is a handsomely crafted love letter to the brand’s earliest days, and I was recently afforded the opportunity to explore this piece alongside the history that inspired it during a trip to Lancaster, Pennsylvania. 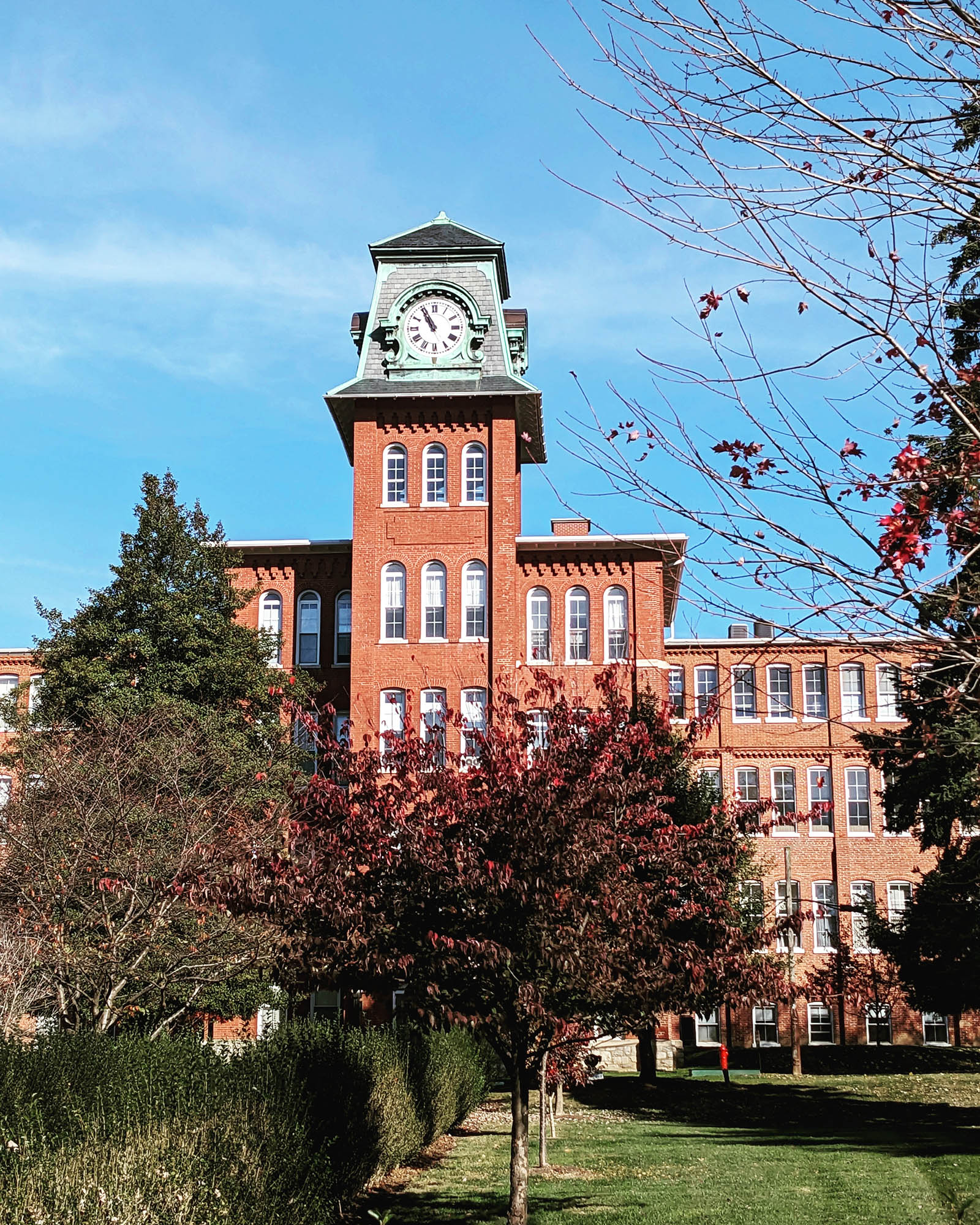 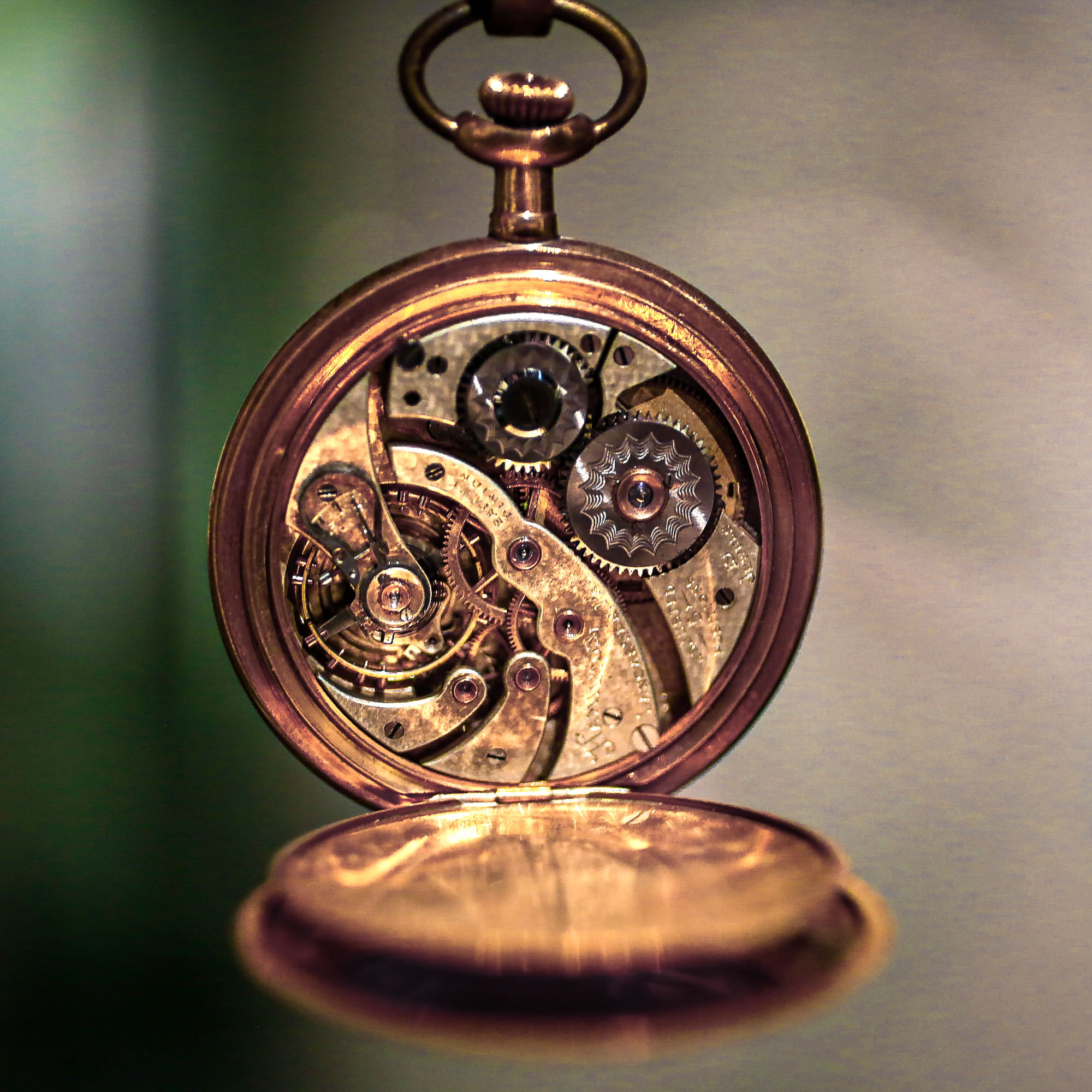 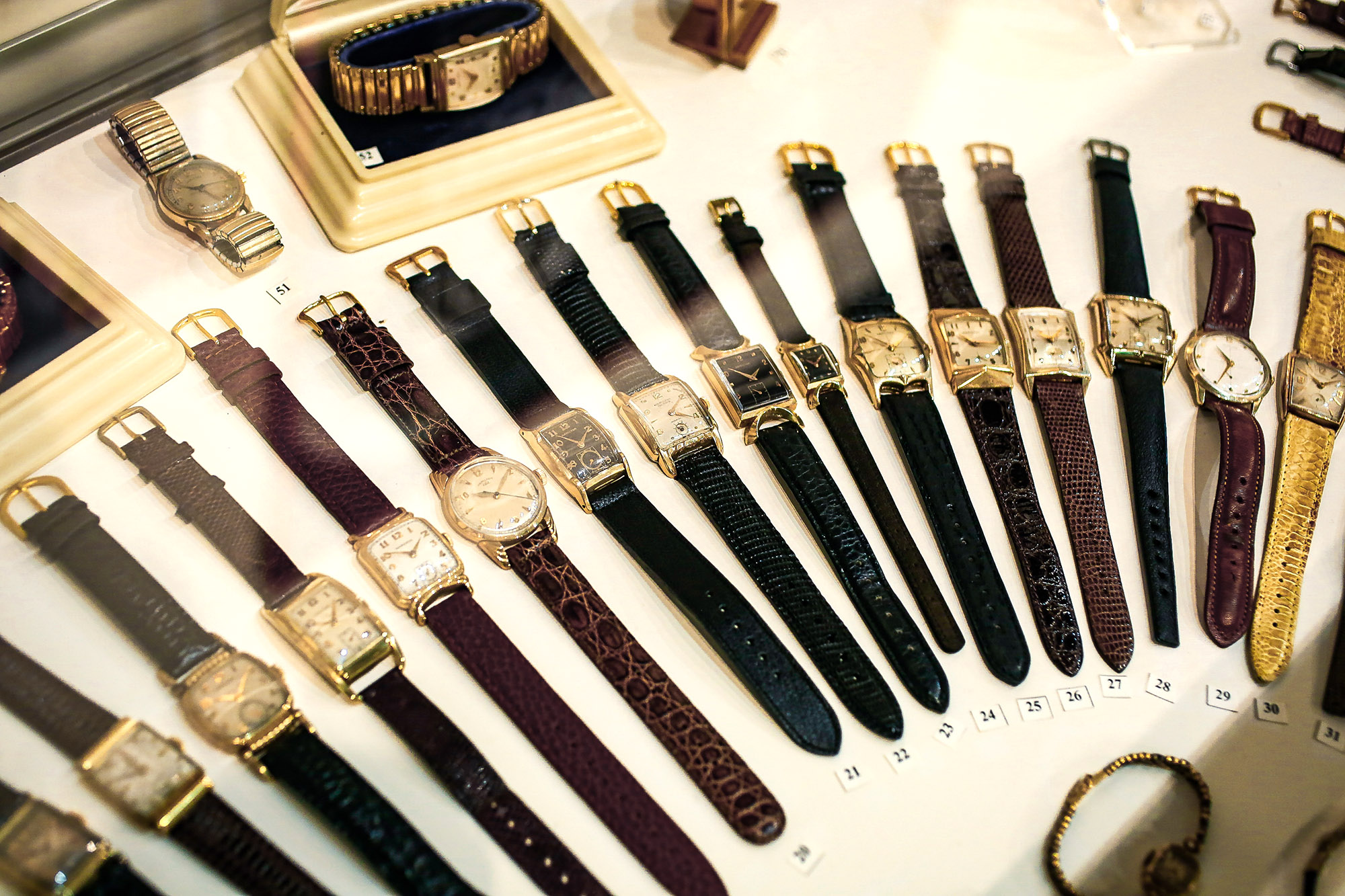 For those who have never had the opportunity to visit, Lancaster lies roughly 60 miles west of Philadelphia, at the edge of Pennsylvania’s famous Amish country. Nowadays, this town of 58,000 people is a tourist and shopping hub, with a Norman Rockwell-esque blend of historic buildings, traditional homes, and rich autumnal Northeastern countryside. In 1892, however, Lancaster saw the opening of the Hamilton Watch Company, and the original factory still stands today as a luxury housing complex. Still decorated with factory ephemera, including storage units made from the factory’s original precious metal vaults, this is only one part of the Hamilton legacy that still rings strongly in this corner of Pennsylvania. At its height, Hamilton was the largest employer in Lancaster, and at one point, the brand supplied 56 percent of the railroad chronometers used across the United States. Much of this legacy is celebrated in nearby Columbia, Pennsylvania, at the National Watch and Clock Museum. Amid the museum’s more than 12,000 timepieces is an entire display wing dedicated to Hamilton’s history in Lancaster, including a broad selection of early Hamilton railroad watches alongside a spectrum of one-offs, prototypes, and rare references from throughout the brand’s extensive back catalog. In short, even though Hamilton officially left Lancaster in 1969, the region still echoes with passion for the brand, and that enthusiasm is undeniably infectious. 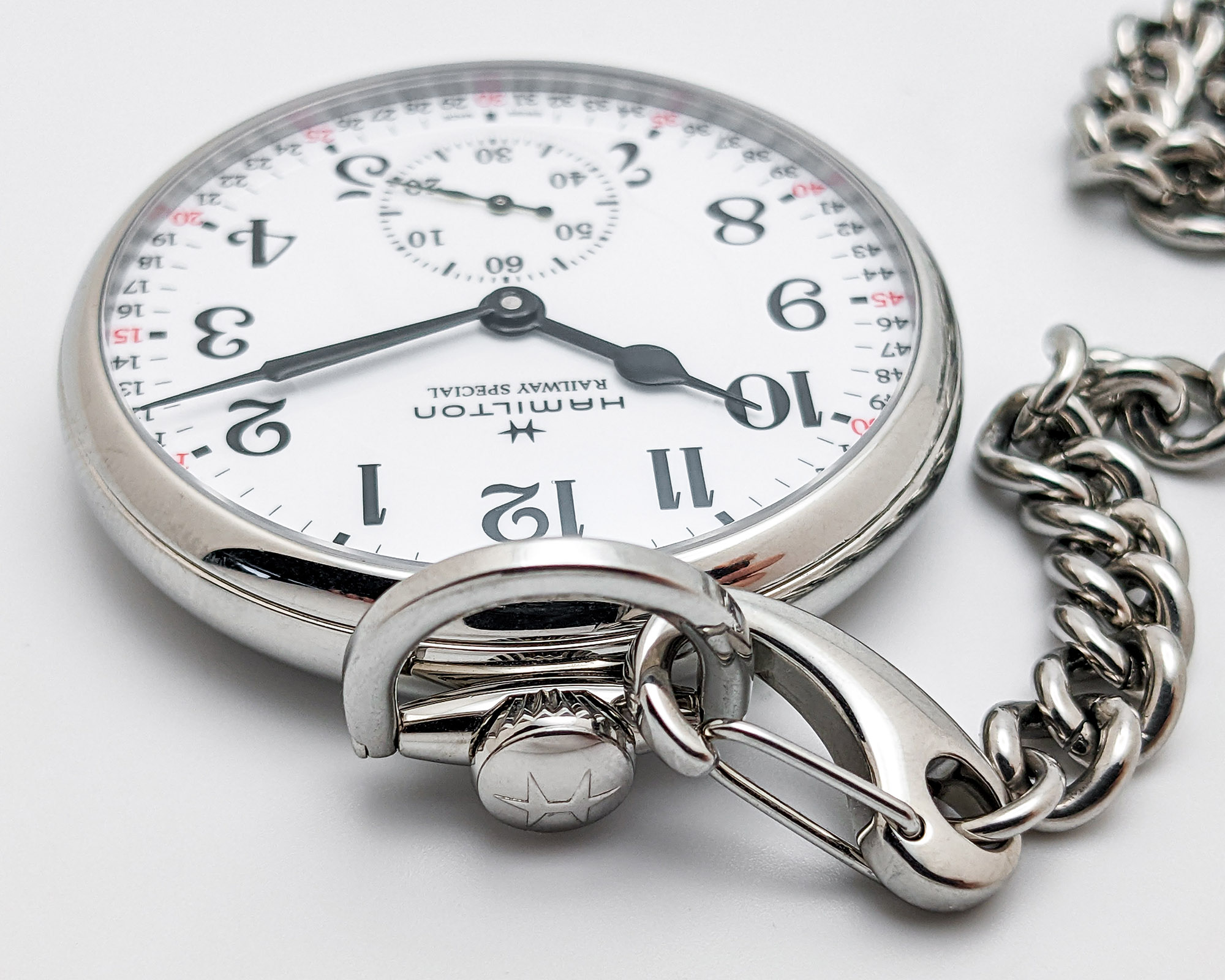 As much as Lancaster still loves Hamilton, Hamilton obviously still carries a massive amount of respect for its Pennsylvania roots, and this passion shines through in the Railroad Pocket Watch. At its heart, this is a solidly faithful reproduction of its early 20th-century railroad models, and this love letter to history takes on an unorthodox (by today’s standards) form. The 50mm-wide stainless steel case is classic turn-of-the-century fare, with a continuous rounded case side profile broken up by an implied bezel groove. While talking about the wearing experience of a pocket watch is obviously different from a wristwatch, there’s a pleasing heft to design in the hand, and the fully-polished surface is clean and even. Hamilton does make a modern update with the Railroad Pocket Watch’s crystal, which is rendered in anti-reflective sapphire. At 12 o’clock, the brand opts for a sleek, relatively simple hinged bar as an attachment point for the included chain, but a broad, ornately fluted diamond-shaped crown helps to add a visual highlight here. The solid caseback is given over to a clean, stylized engraving of the front of a steam engine, visually tying this design together with the brand’s earliest days. Hamilton does rate the Railroad Pocket Watch for 50 meters of water resistance, but this is far from the sort of equipment one would want for underwater activity. 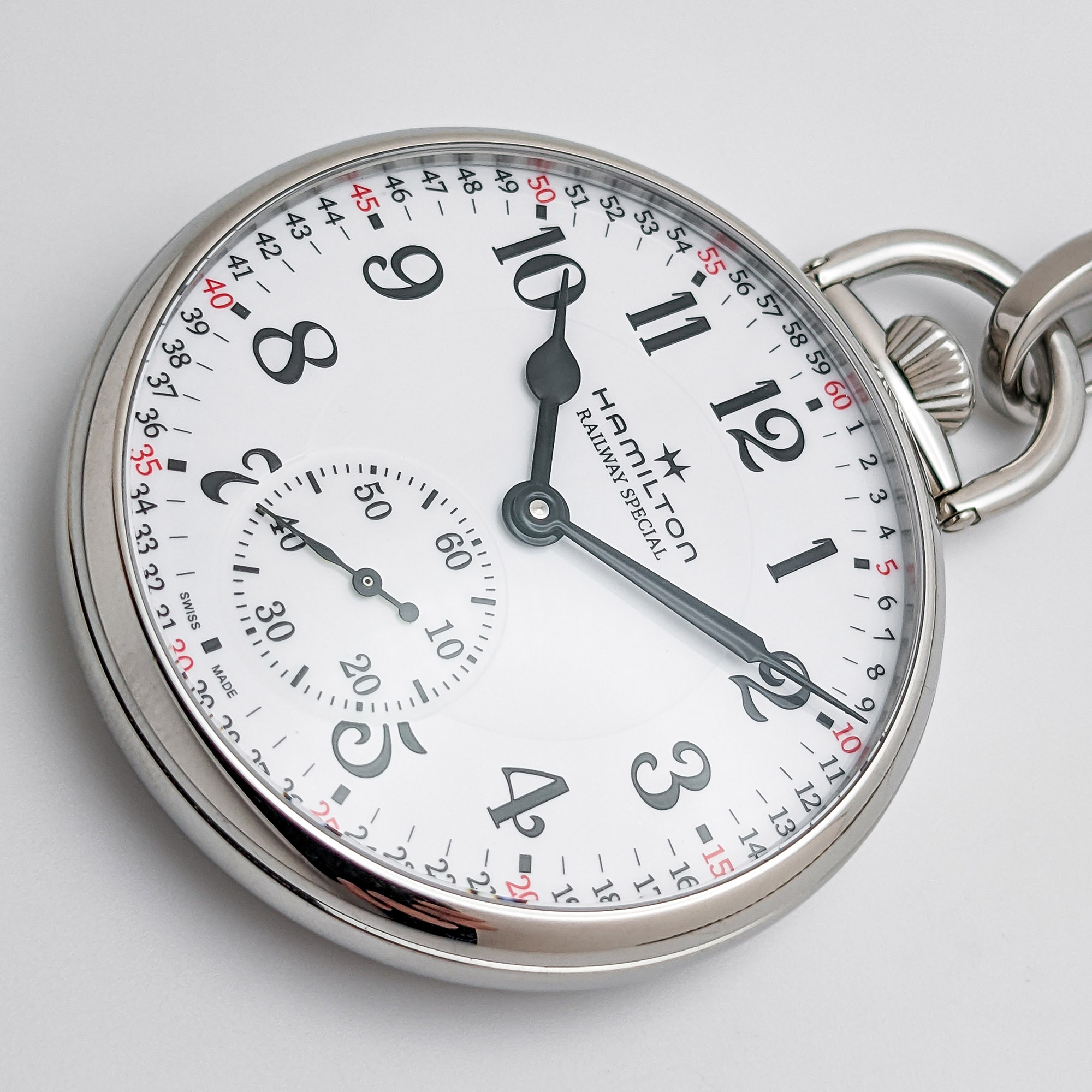 For the Hamilton Railroad Pocket Watch’s dial, the brand closely follows the traditional railroad watch standard. As a result, this enamel-style white dial offers a handsome balance of classical ornamentation and ultra-legible functionality. The glossy black spade handset is complemented by a set of almost whimsically stylized Arabic hours numerals, flanked by an open, fully demarcated outer minutes track. The combination of bold markings, a sharply pointed minutes hand, and red accents at five-minute intervals makes this an exceedingly easy design to read at a glance, while the colorful highlights work to elevate the stark black and white color palette. At 6 o’clock, the oversized running seconds subdial is equally legible and clear, with a touch of old-time elegance courtesy of the spear-tipped seconds hand. But it’s the white dial surface itself that captures the most attention at a closer look, however. There’s a subtle stepped effect between the hours ring, central dial surface, and the recessed subdial at 6 o’clock, which combines with the glossy surface to create a sense of immense visual depth. At certain angles, the glossy printed numerals appear to be floating in an ocean of pure white milk. It’s a striking effect that only occasionally makes its way into modern watchmaking, but the greater space of a pocket watch dial really allows this effect room to flourish when compared with a wristwatch. 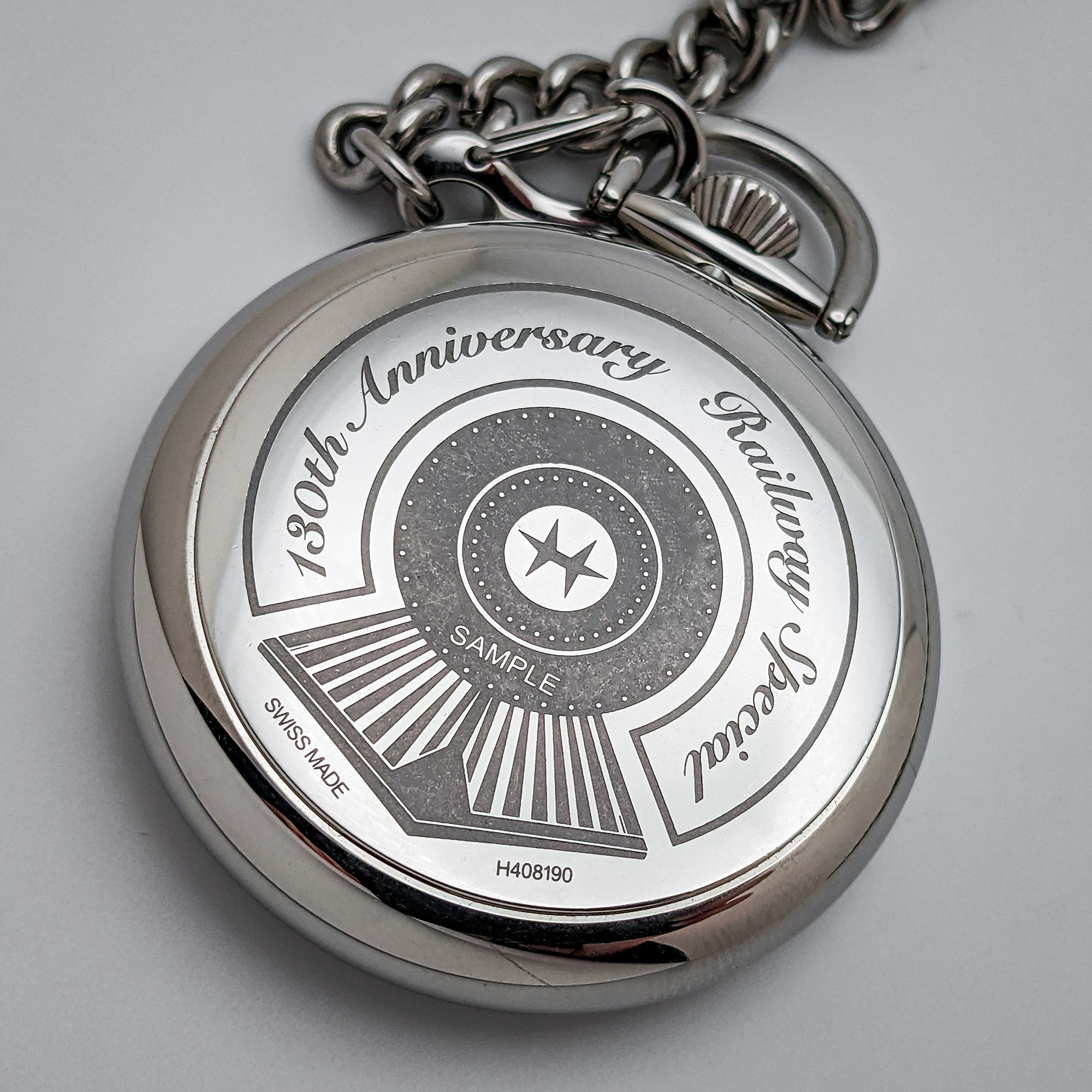 Hamilton powers the Railroad Pocket Watch with the ETA 6497-1 hand-wound movement. The 6497-1 has been a mainstay of both pocket watch and wristwatch production since its introduction in the ‘60s, and with its old-school 18,000 bph beat rate, it works to capture the spirit of the early railroad watches in practice. The movement also offers a solid 50-hour power reserve, but curiously (especially for a high-accuracy railroad timekeeping application) does not hack. However, the 6497-1 performed superbly on the accuracy front during our testing period, averaging only +4 seconds per day. Hamilton finishes the Railroad Pocket Watch with a matching stainless steel chain. Although the signed carabiner-style end clips may be a bit of an anachronism here, the chain is sturdy and easy to fasten to belt loops, jacket pockets, or any number of other applications. 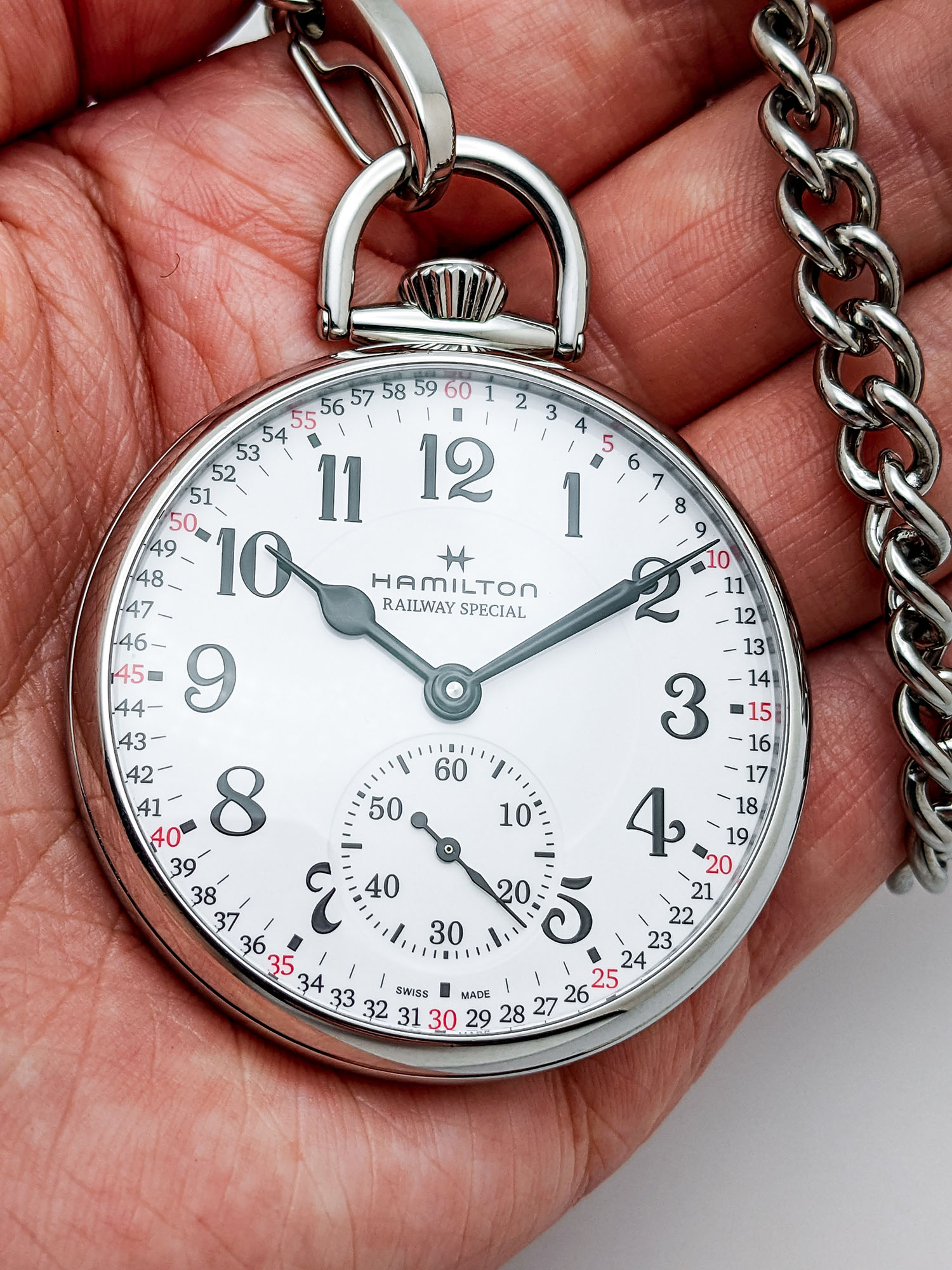 With handsome finishing, a defiantly classical execution, and loving nods to Hamilton’s early history throughout, the limited-edition Hamilton Railroad Pocket Watch is a fitting climax to a year of 130th-anniversary celebrations for the brand. During my time in Lancaster, I was clearly not alone in this opinion, as Hamilton’s historic homeland still resonates with affection for the brand and its heritage. Even the limited-edition size of 917 pieces is a tribute to its Lancaster heritage, referencing the original factory’s address at 917 Columbia Avenue. The Hamilton Railroad Pocket Watch is available now through authorized dealers at an MSRP of $1,395 USD. For more details, please visit the brand’s website.