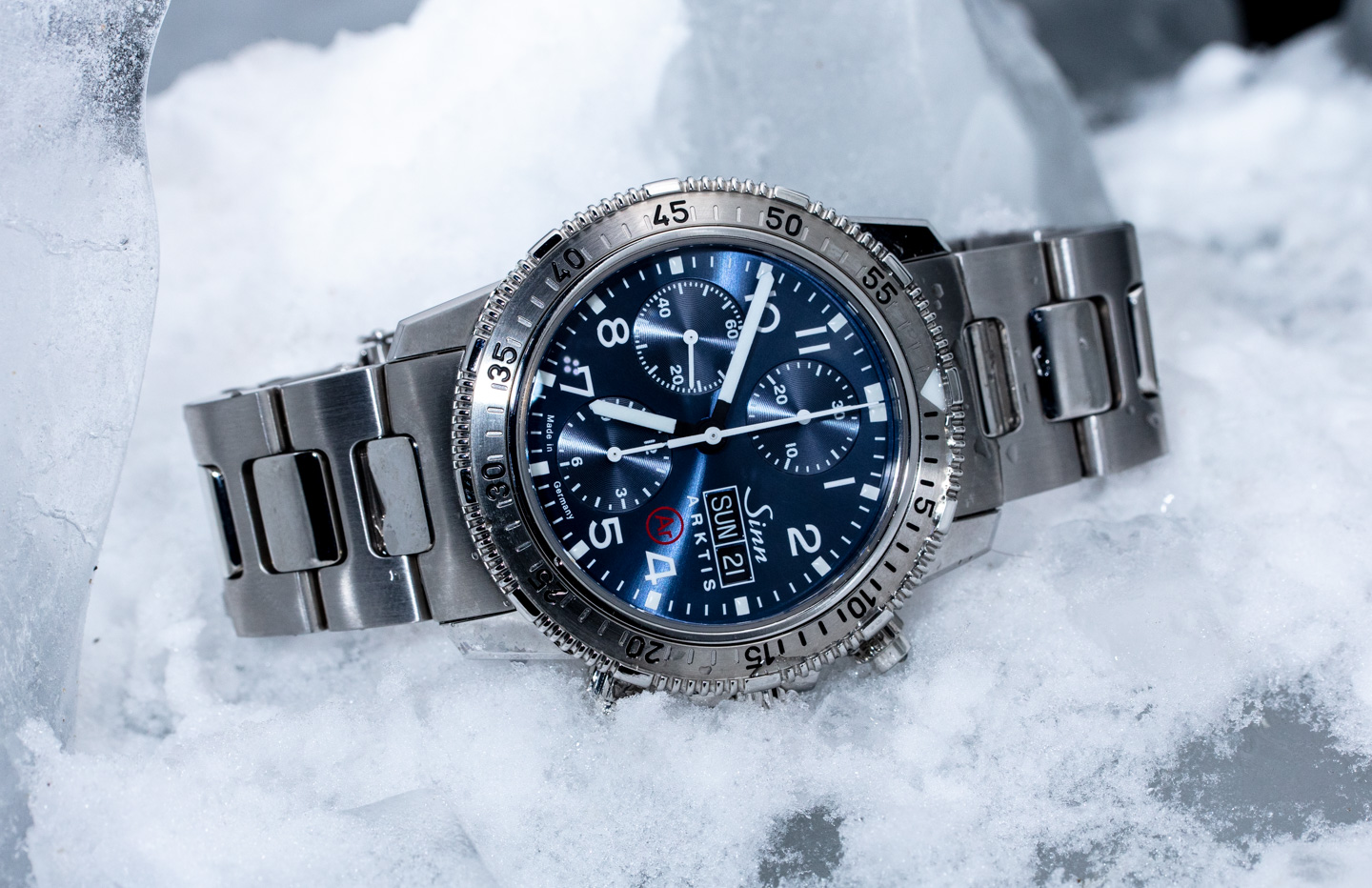 Watch Review: Sinn 206 Arktis II, A Cold-Weather Diver That Will Warm Your Heart 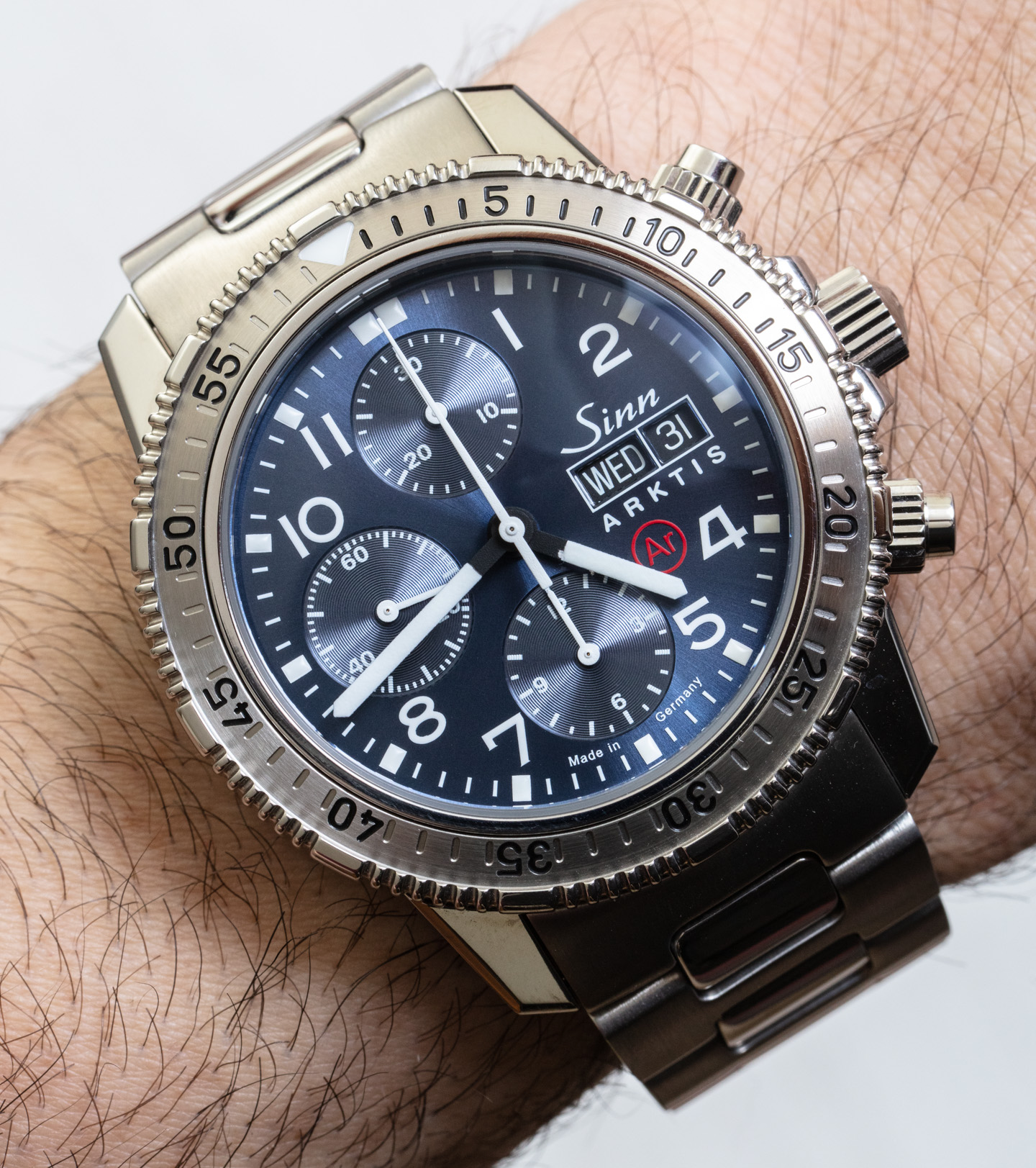 There are very few ideal watches, and there are nearly no perfect ones. But there are some timepieces that do so many things well at the same time, plus deliver a bit more than expected, that they become exemplars of the “perfect tool watch.” The Sinn 206 Arktis is just such a perfect tool watch, and everyone who considers themselves a contemporary timepiece enthusiast should own something that is as ideal as this.

My story with the Sinn 206 Arktis II began long ago when it was still called the Sinn 203 Arktis. The 41mm-wide German cold-weather diver’s watch came out just over 20 years ago, in 1999, and was one of the first watches I ever fell in love with just as I was getting started with the watch hobby. I never owned an original Sinn Artkis but when the company released the 206 Arktis back in 2019, it gave people like me a second chance to own a classic. The Sinn 203 and 206 differ in small but important ways. The 206 has a case that is 2mm larger, and it also happens to make use of Sinn’s most modern tech. Otherwise, the watches look very similar and the 206 is a really decent alternative to the classic 203. Technically, the 206 is a superior watch given the technology upgrades. Please also check out my hands-on review article of the Sinn 206 black dial, which is the non-Arktis version of the same watch. 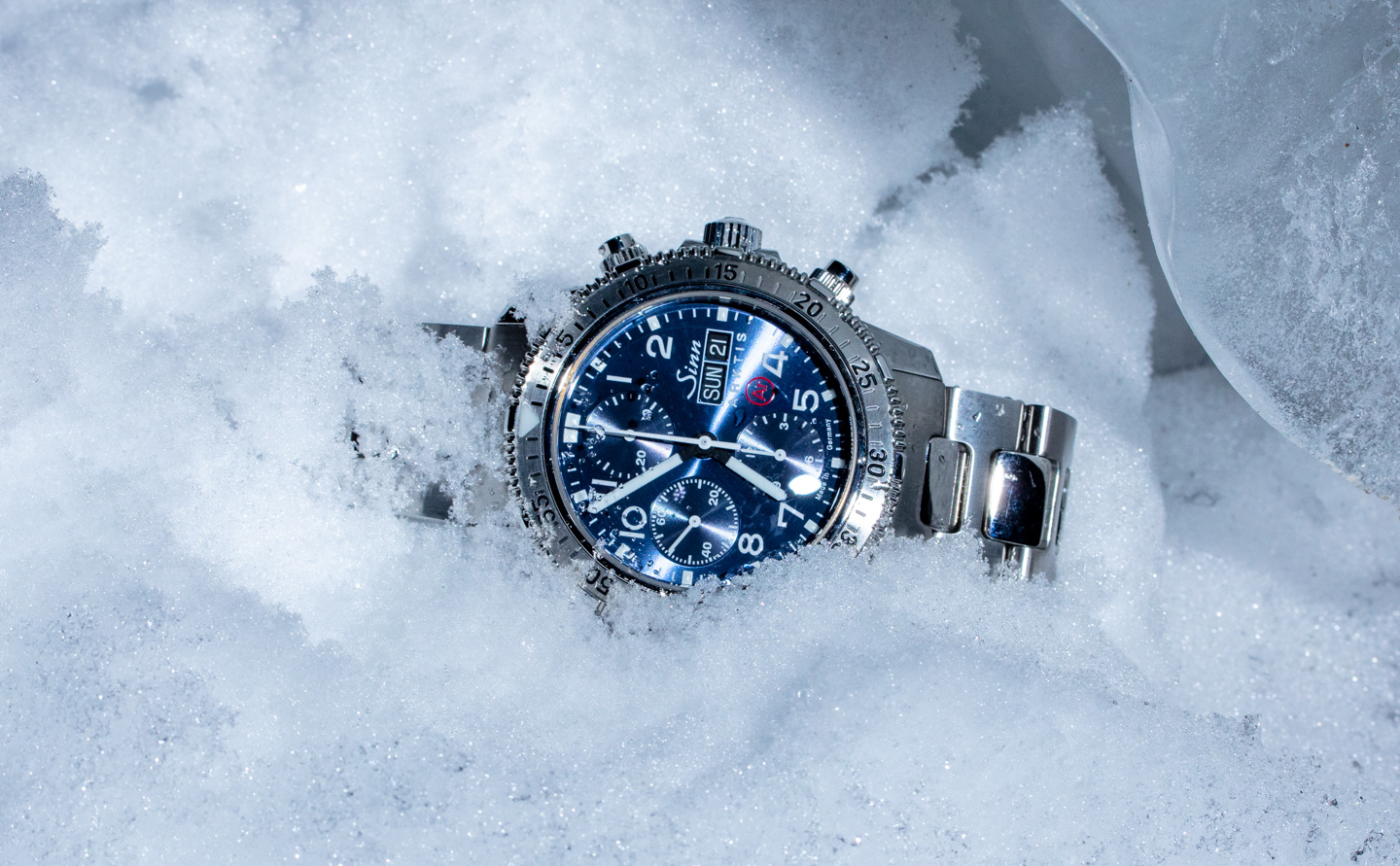 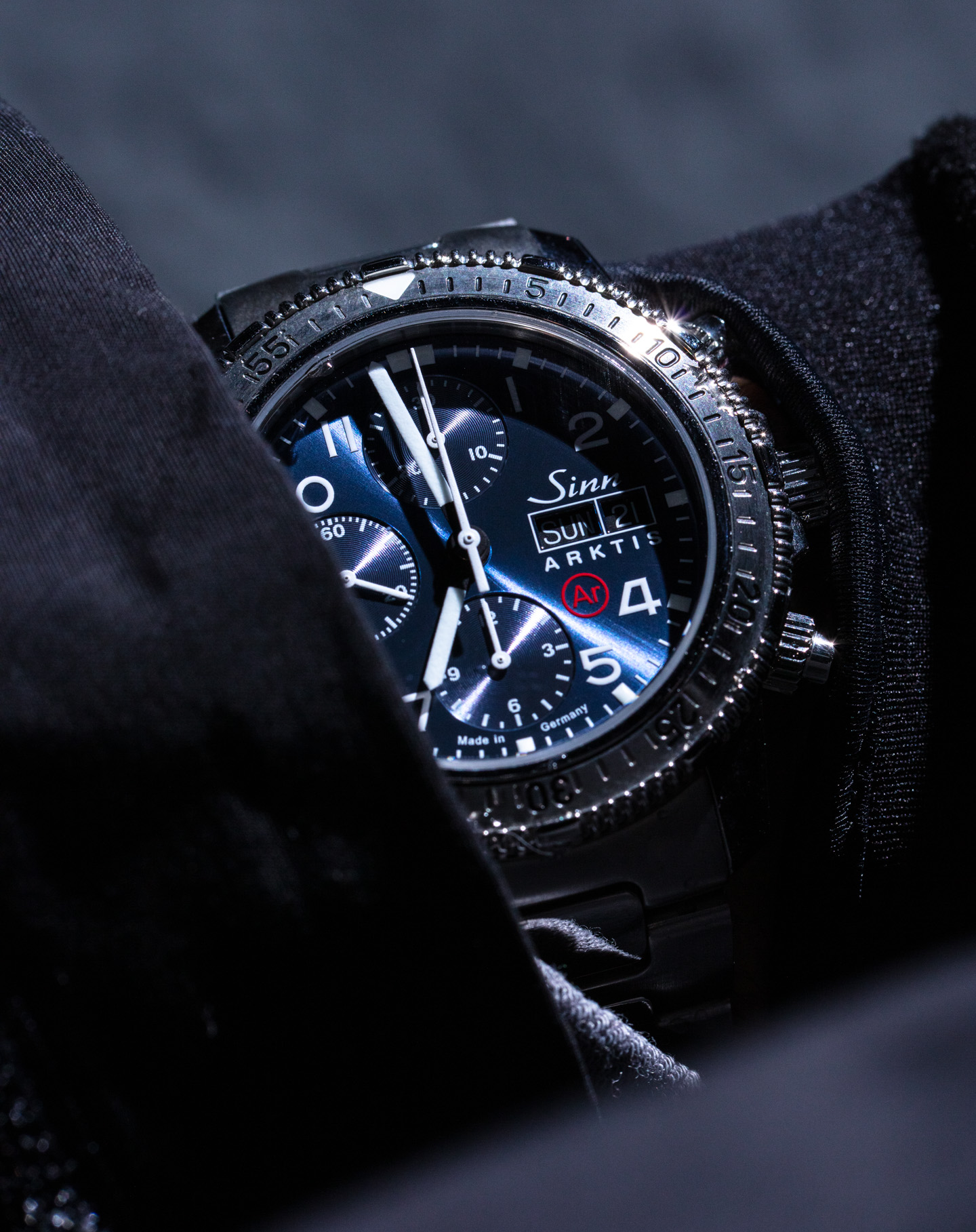 Other dial colors of this Sinn watch style exist, but what makes it the Arktis is the particular style of electroplated metallic blue sunburst dial, clearly meant to suggest ice. The watch, at heart, is a military-style all-purpose field watch, but it also happens to be a professional-use diver’s watch. The Sinn 206 is further rated to operate at -45 degrees Centigrade, making it a rare choice for particular explorers who will be encountering both extreme cold and water. Systems in the 206 watch such as a gas-filled case (the dial says Ar for “Argon,” but Sinn has since replaced argon with a superior gas mixture), and the moisture-absorbing capsule are part of a “cold weather technology package.” Together these things protect against the dial fogging up (among other things). This is a pretty big deal for anyone who has known the displeasure of a watch dial that fogs up, and more about the watch’s resistance to cold weather and water below.

Sinn makes no shortage of military-esque diver’s chronograph watches like the 206. So, in a lot of ways, if you prefer another model, it could easily have similar functionality and performance. That said, nothing else in the (admittedly prolific) Sinn catalog looks quite like this handsome steel bezel on steel case with masculine blue dial (though I believe they did come out with a version of the Sinn 103 watch with a dial that has a similar shade of blue). The Sinn 206 Arktis II is an adventure watch that can be dressed up. 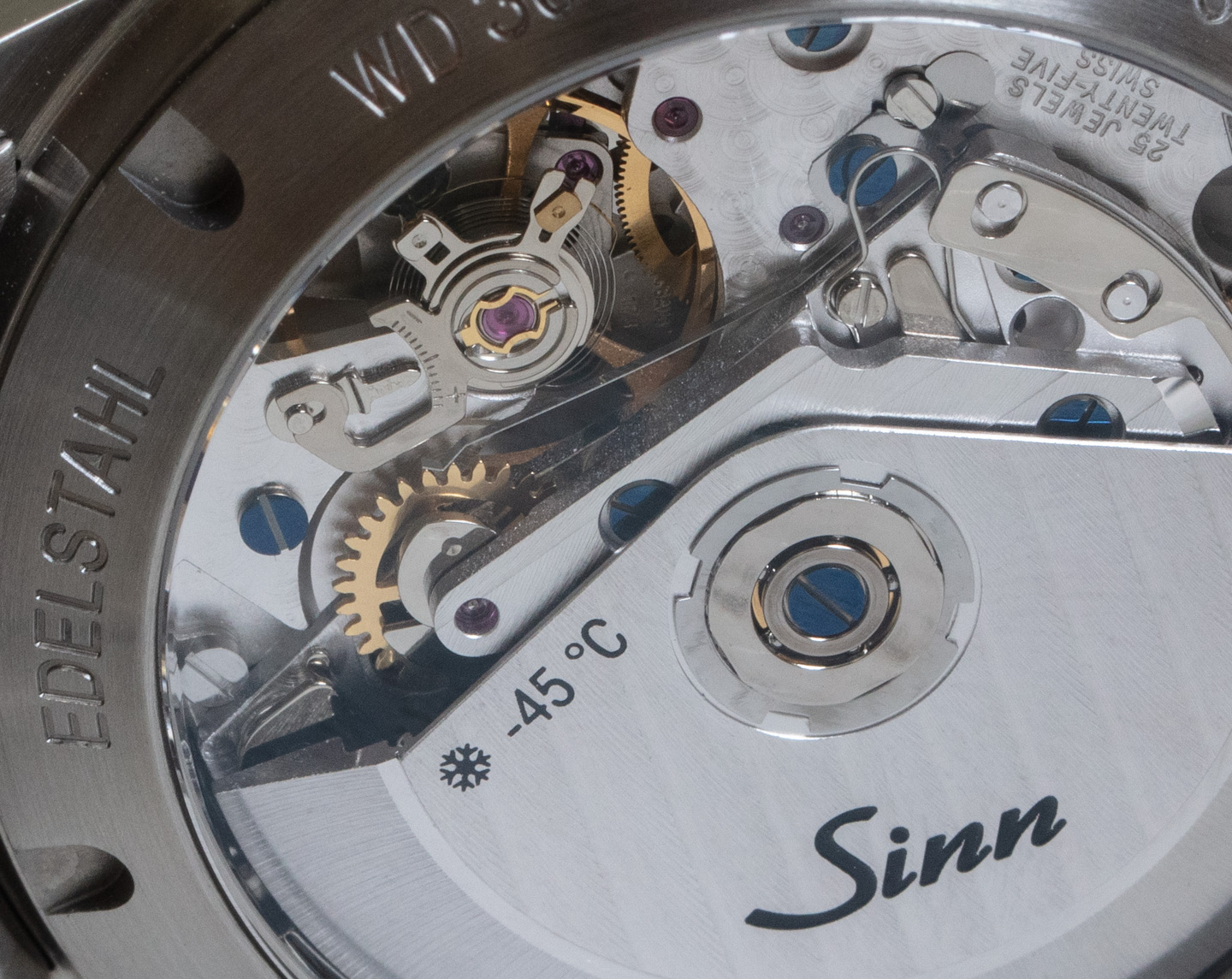 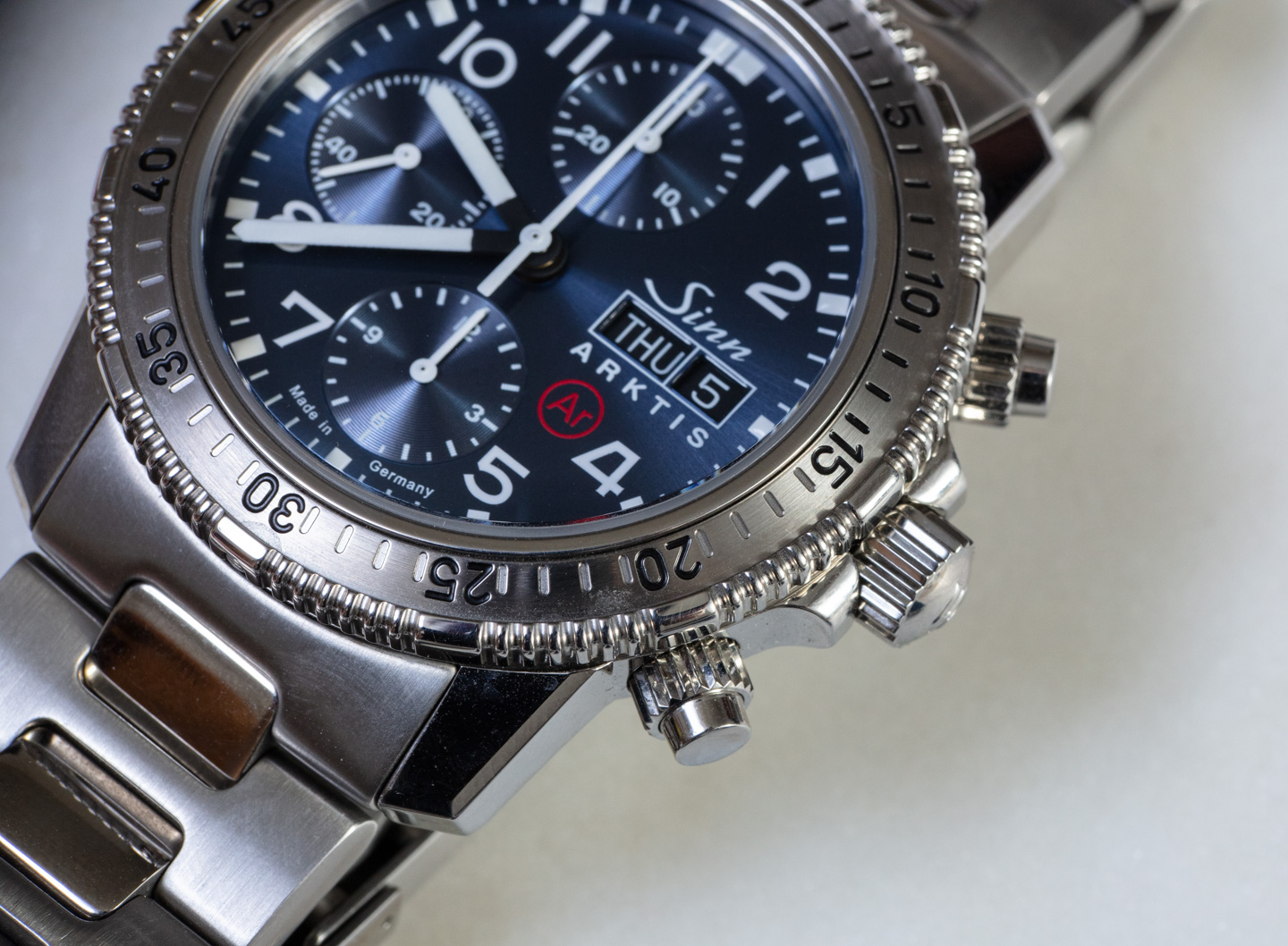 On the matching polished bracelet or the available blue alligator strap, the Sinn 206 Arktis does indeed make a handsome social, business, or office watch. It very much has a Breitling vibe but actually for a good deal less money. The dial is a paragon of legibility and classicism. Nothing too large, nothing too little, and nothing really overlapping one another. The dial is one perfect interpretation of how to layout a Swiss Made ETA Valjoux 7750 automatic 12-hour chronograph movement, along with exceptional dial legibility under the AR-coated (with multiple layers) domed sapphire crystal. Dial luminant is excellent, and it is interesting that indicators for the time, but not chronograph, are given the lume-painted treatment.

Steel on steel bezels are a niche style, but undeniably handsome and help professional watches such as this feel more stylish than their designers might have originally intended. The uni-directional rotating bezel has etched markers in it, but is in steel matching the rest of the case and really offers a handsome view when the watch is worn on your wrist. The steel case itself for the 206 is 43mm-wide and 17mm-thick with a roughly 50mm lug-to-lug distance (making it very wearable). The 206 is arguably the most comfortable on the fitted Sinn rubber strap, but it is hard to beat the classic Sinn linked bracelet here in brushed and polished steel. 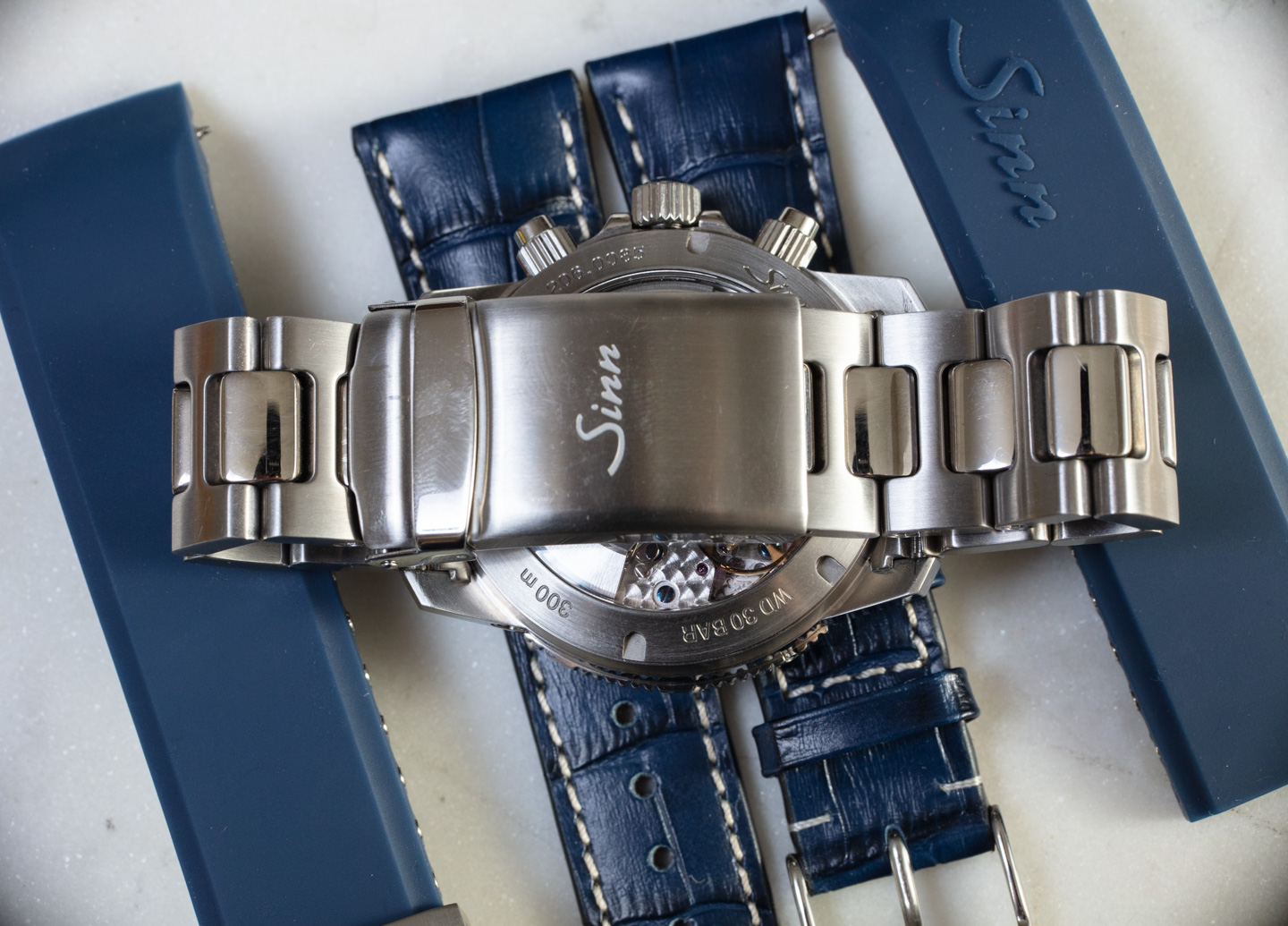 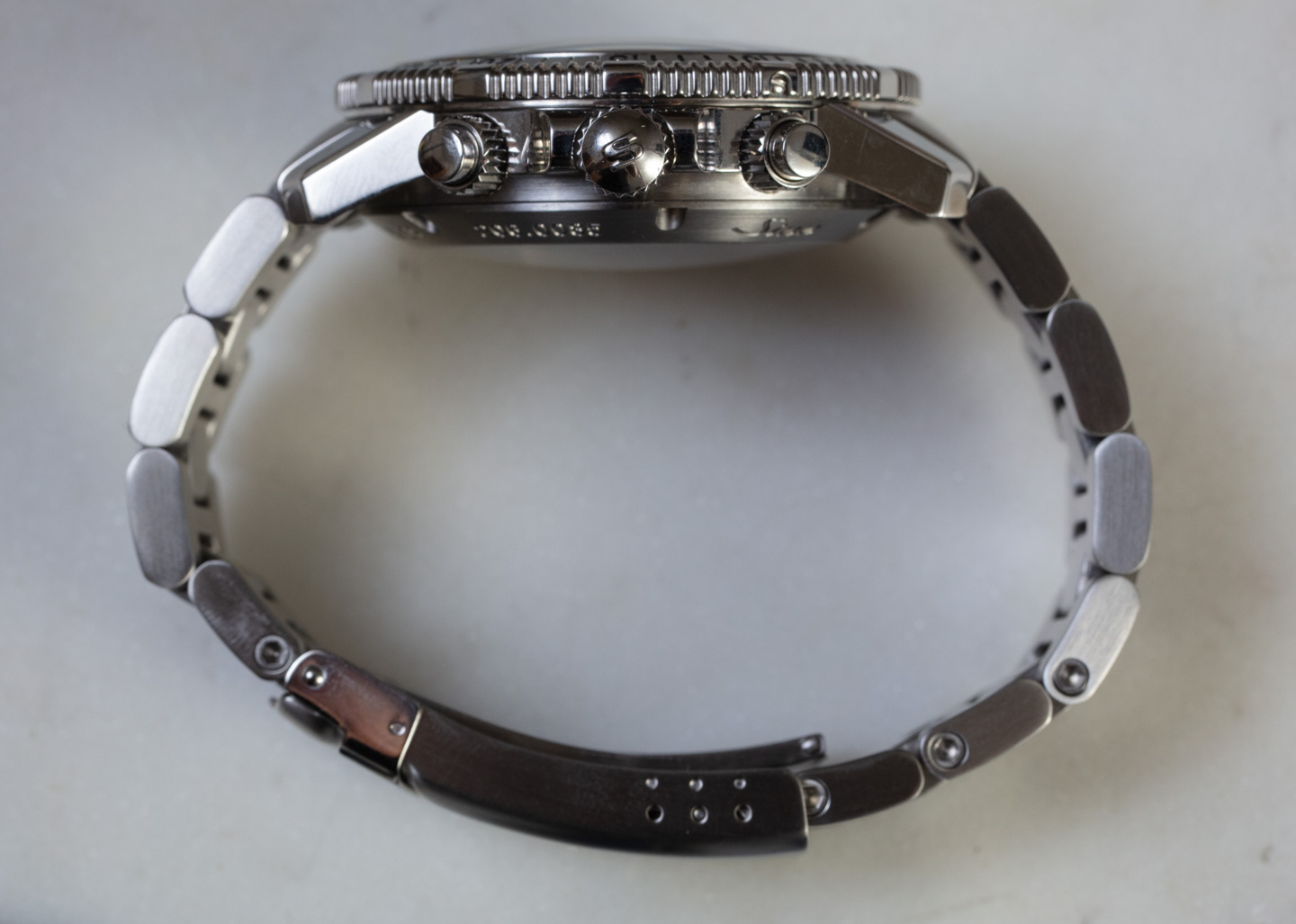 Water-resistant to 300 meters, the 206 is more than just a diver’s watch when it comes to preventing water from entering the case. Let’s start with the chronograph pushers, that make use of Sinn’s “D3 System” that includes a series of special seals (EDR, or “extreme diffusion-reducing” seals as Sinn refers to them) to create near absolute water impermeability. This is less about resistance underwater, but more so about resisting latent humidity from getting inside of the case. An interesting detail here is that while the pushers appear to be screw-down (as the original 203 had), they are actually non-screw-down and simply require a push. This is because the D3 System technology is so good, water cannot enter into the chronograph pusher stems even with the watch underwater. I am unclear as to whether the chronograph can be operated underwater, but I’d avoid doing that.

Then is the Ar-Dehumidifying technology which is a suite of technologies that make sure that water that enters the case is quickly handled. As I said above, this begins with the fact that the case is not filled with oxygen, but rather a special gas mixture. This not only prevents fogging up, but the gases help things like movement oils and lubricants last a lot longer. A major part of the dehumidifying technology is the placement of a Sinn drying capsule in the side of the case. This capsule contains copper sulfate, which permanently absorbs any water molecules that are in the case’s atmosphere. This capsule can be removed and replaced if it gets “full,” meaning if it absorbs water, it can simply be swapped out with a new capsule so that the watch’s interior is protected from further water intrusion in the future. 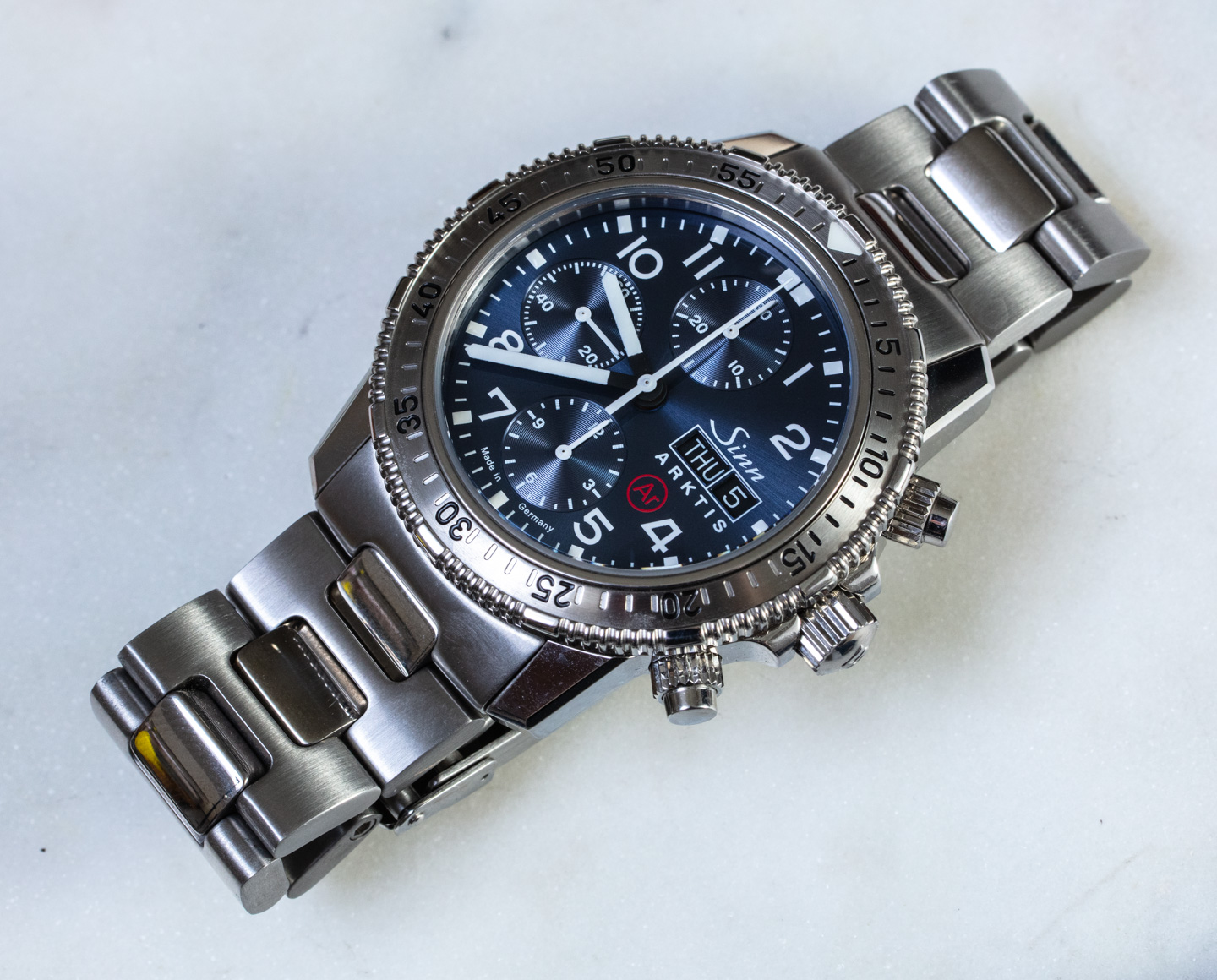 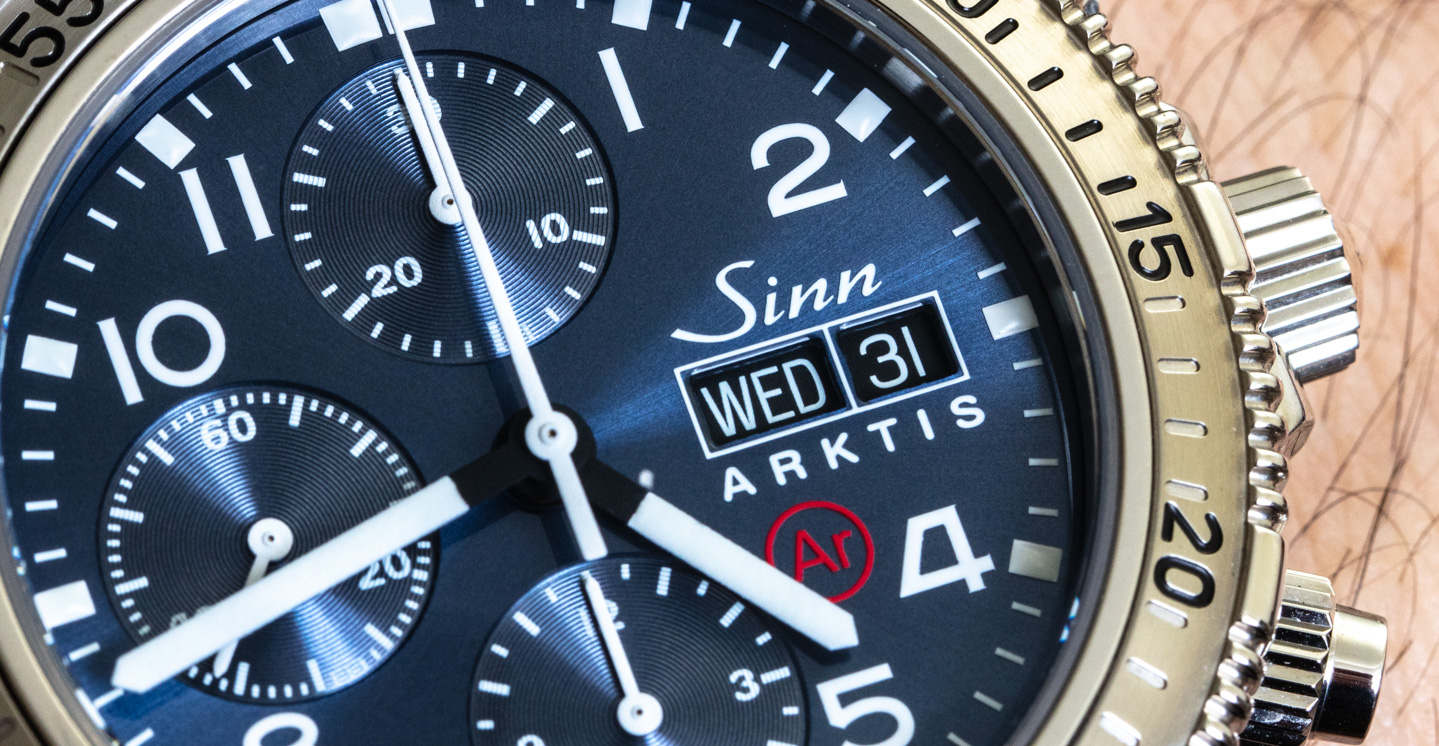 Speaking of oils and lubricants, the Sinn 206 Arktis II uses special watch movement oils and lubricants that are designed to maintain stability at extreme temperatures. Thus, the lubricants used perform within acceptable ranges even when other lubricants would gel up or harden at certain low temperatures. So, being a “cold weather” watch is more than just an aesthetic style for the Sinn 206 — it is a function of the tool based on the effects of a number of special components and systems.

Inside the watch and visible through the 206’s sapphire crystal caseback is a Sinn-tweaked Swiss Made ETA Valjoux 7750 automatic chronograph movement. This 12-hour chronograph movement also features a day/date calendar and is among the more popular automatic chronograph movements on the market. The Valjoux 7750 operates at 4Hz with a power reserve of about two days. Sinn carefully regulates it in-house for optimal accuracy. The movement is presented in a high grade, which includes better components along with decorative features such as blued steel screws and perlage-polished bridge surfaces. One of the caseback details I really like is how the sapphire crystal window is domed versus flat. This “bubble-back” style is not only attractive but actually makes wearing the watch a bit more comfortable, in my opinion. 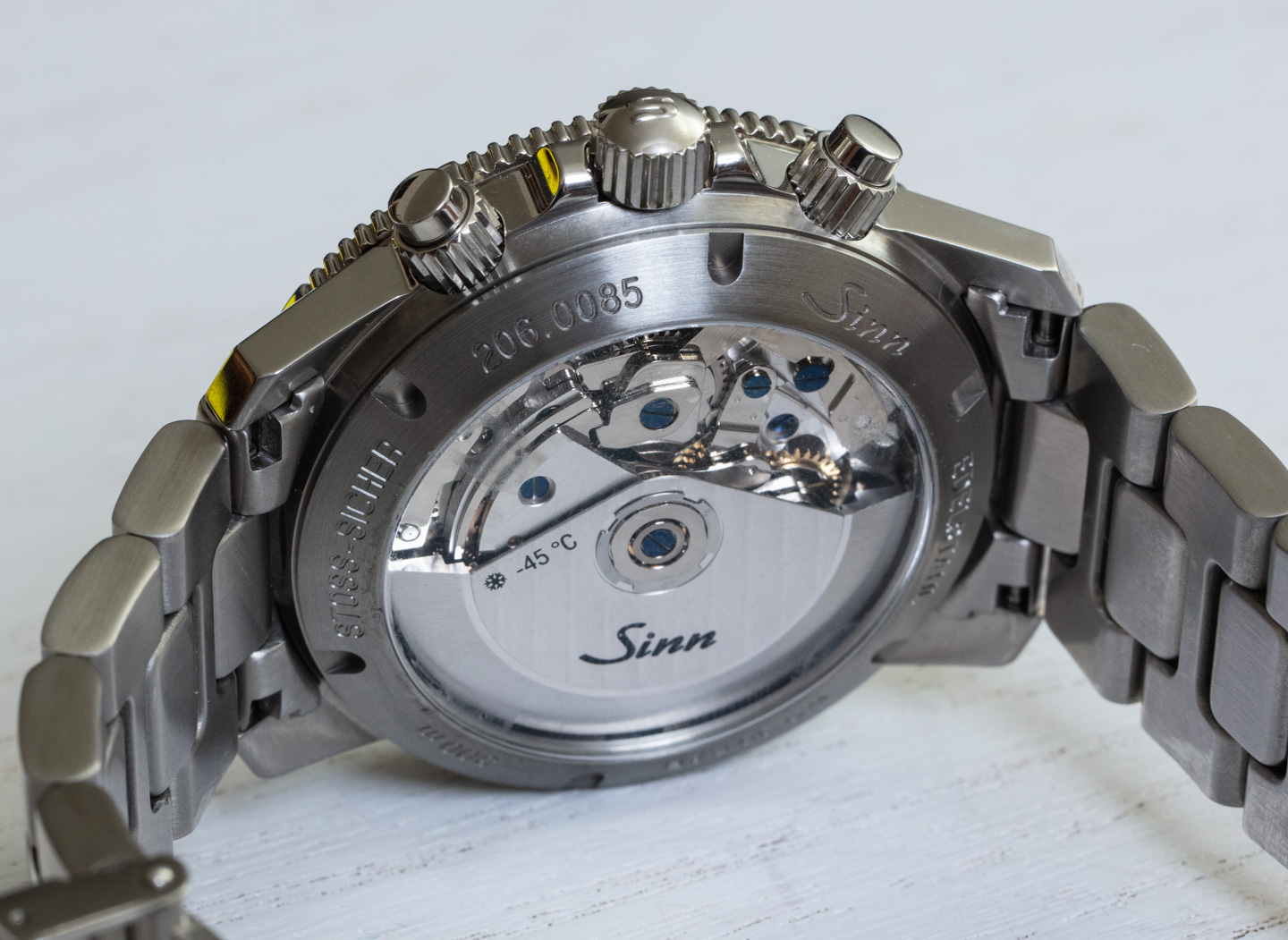 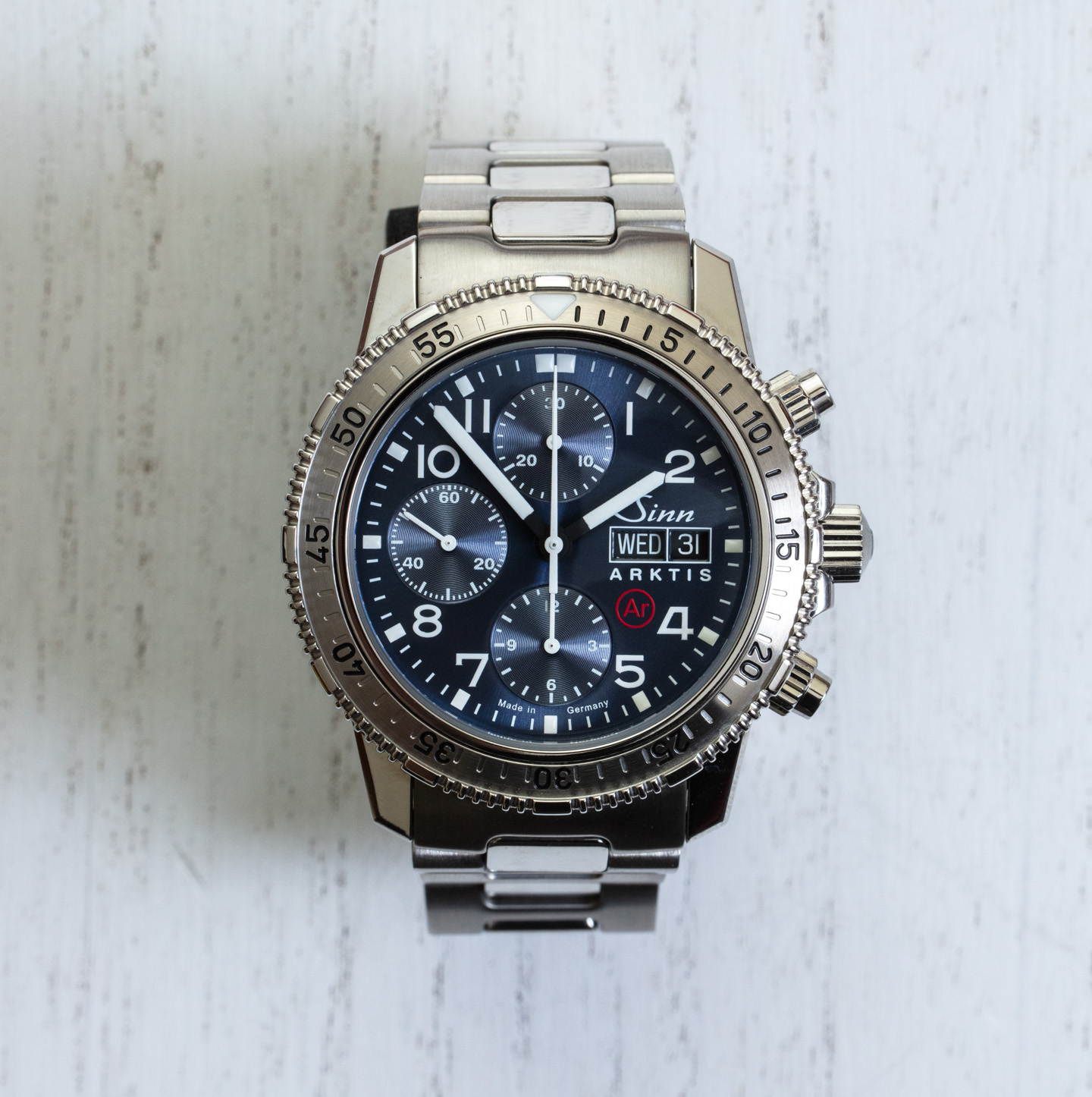 There are of course other performance aspects of the Sinn 206 that one can discuss such as its ability to operate in a low-pressure environment (pilot purposes, for example), as well as the anti-magnetic rating of the watch. Sinn is a proud maker of German tools that just happen to be worn on the wrist and cool-looking. The brand certainly has its toes in the world of fashion and style, but for the most part, Sinn continues to be a company that watch hobbyists love, producing die-hard instruments meant to operate in the most demanding of environments for serious professionals. If your average tool-loving person doesn’t get romanced by that, I’m not sure they are in “the watch game” for any of the right reasons. 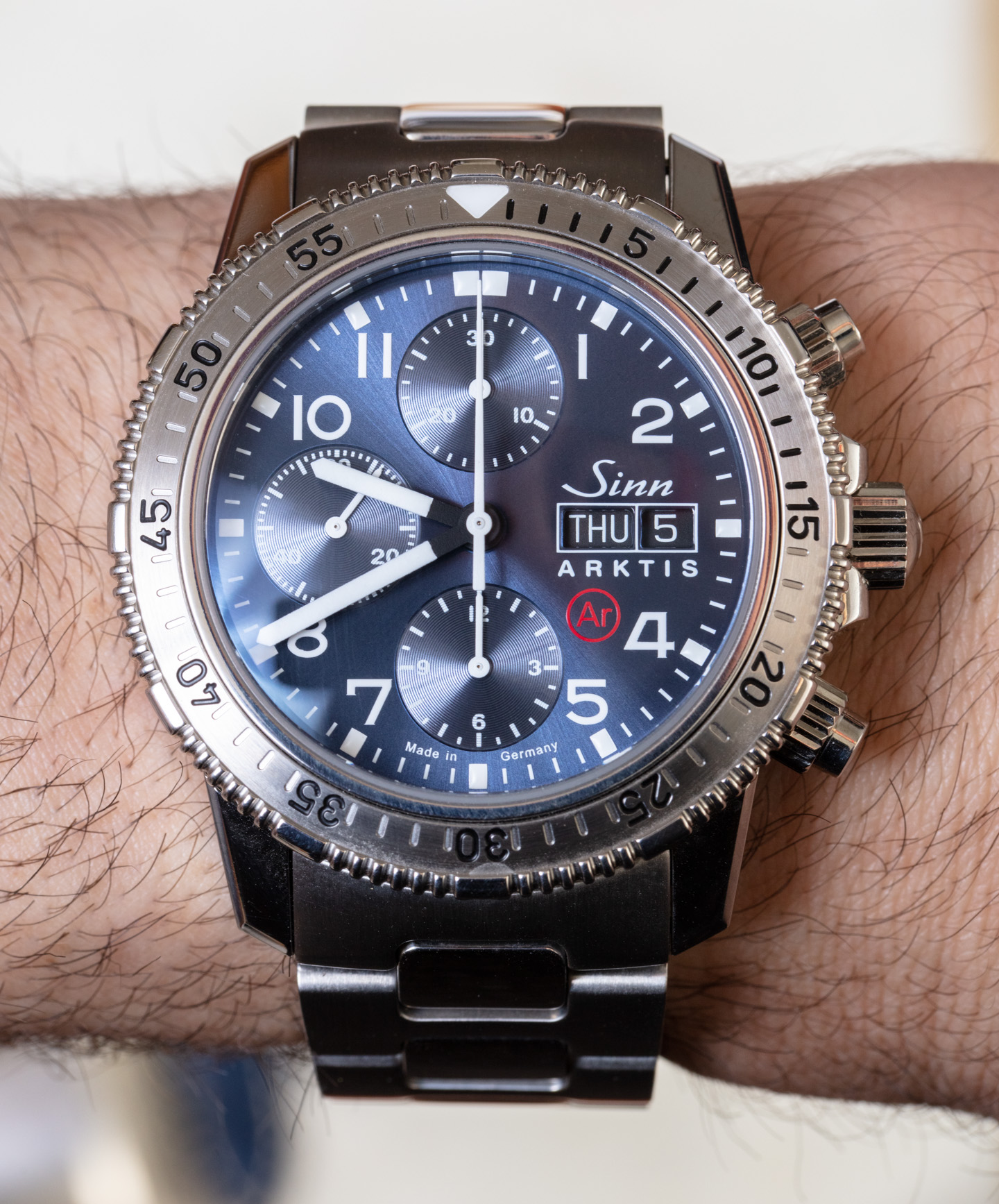 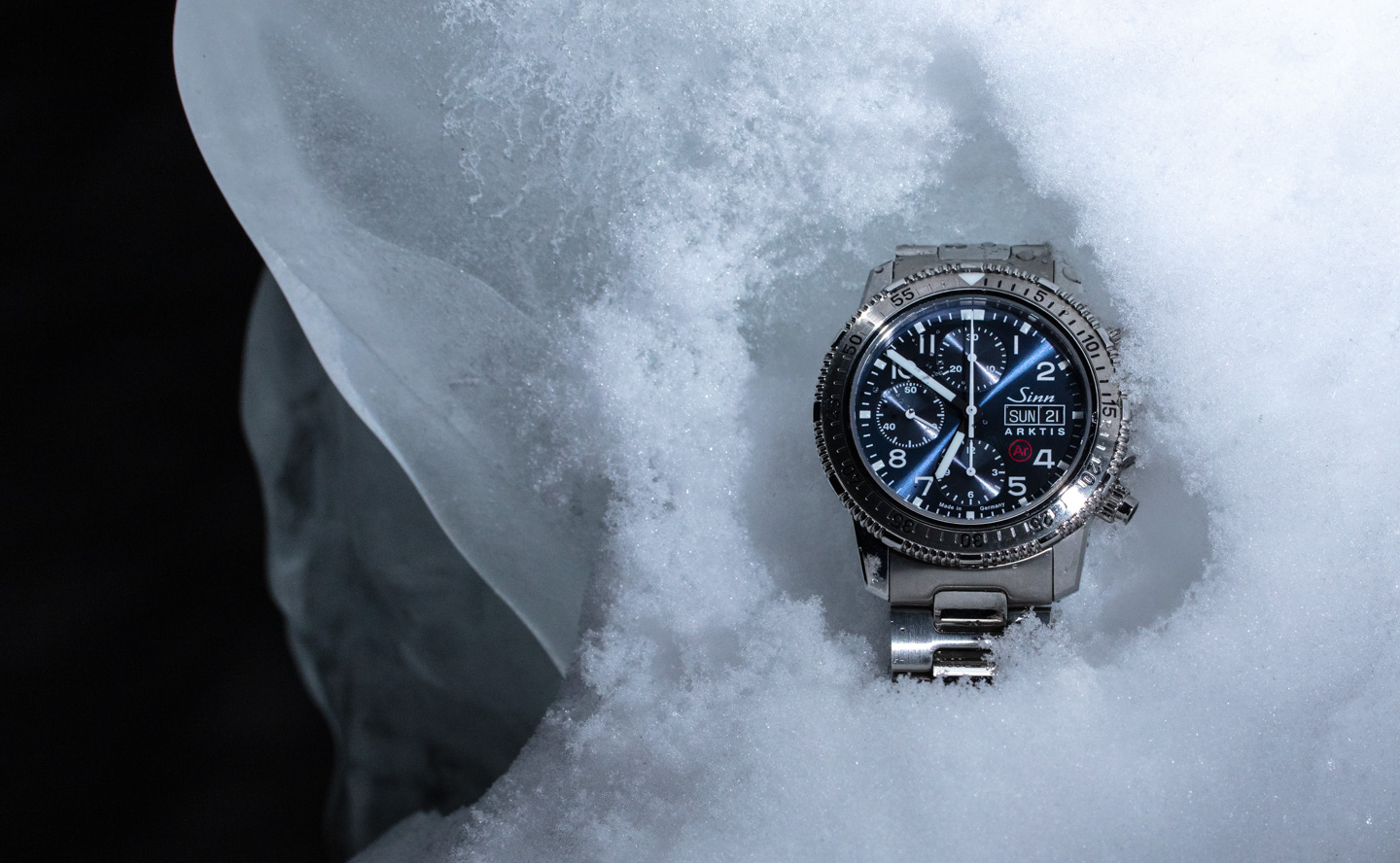 To me the Sinn 206 Arktis II represents both a beautiful German multi-purpose tool watch, and a reminder of when I first got into wristwatches to begin with. That special sentimental meaning might be personal to me, but I can’t see why anyone with similar values wouldn’t fall deeply for this pretty blue chilly-weather diver’s watch. Price for the reference 206.012 Sinn 206 Arktis II watch on the bracelet in the USA is $4,120 USD (price may be slightly different depending on region). Learn more at the Sinn website here.

Necessary Data
>Brand: Sinn
>Model: 206 Arktis II (reference 206.012)
>Price: $4,120 USD as configured in the United States
>Size: 43mm-wide, 17mm-thick, and about 50mm lug-to-lug distance.
>When reviewer would personally wear it: I’d not have a problem wearing this watch almost anywhere. It’s not the lightest nor the smallest, but it is a solid piece of classic tool watchmaking for real enthusiasts.
>Friend we’d recommend it to first: Cold weather adventurers who want an all-purpose tool watch that goes from the snow to socializing without breaking a sweat.
>Best characteristic of watch: Beautiful design that builds upon the classic 1999 Sinn 203 Arktis and renders it in slightly larger form with modern tech for a new generation. While not an inexpensive watch, it feels like an excellent value for what you get and when compared to the competition.
>Worst characteristic of watch: Some modern sports watches are more lightweight and have features such as micro-adjusting bracelet or quick-release straps. Of these, I think it would have been best if Sinn could add a strap release system that makes it easier to change between bracelets and straps without needing tools.