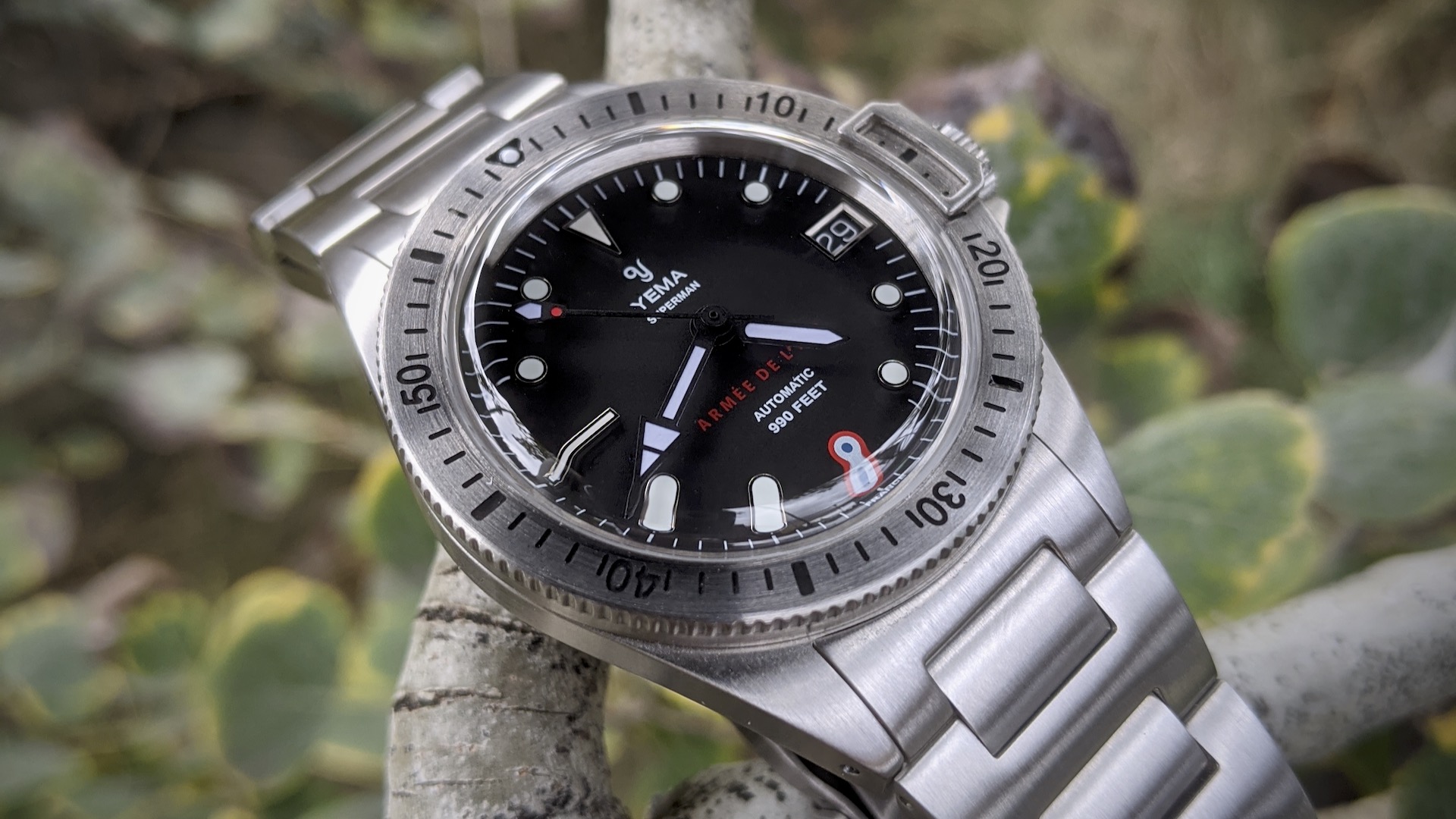 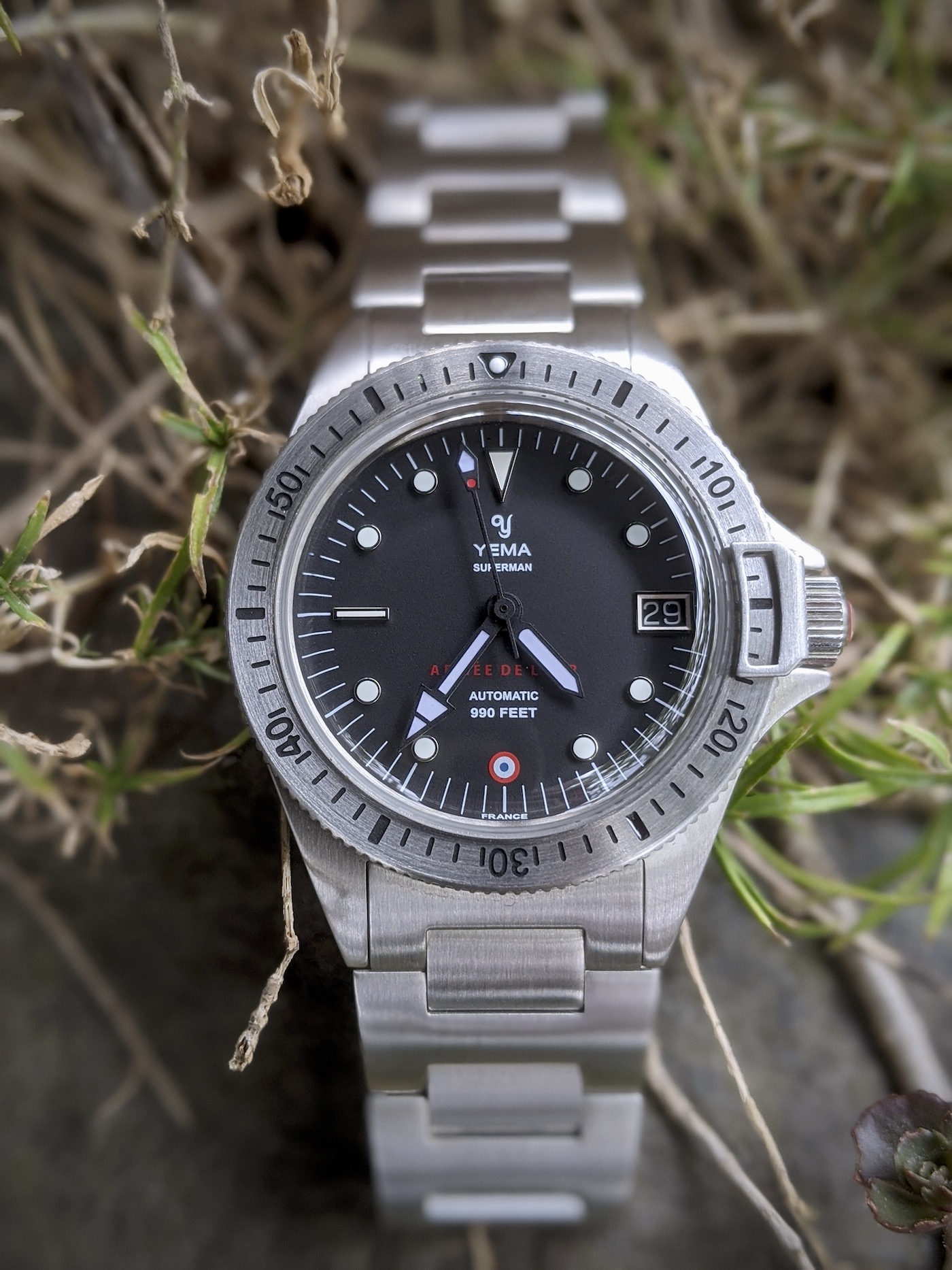 Last year, I had the opportunity to review the Yema Superman Heritage Blue — an attractive vintage throwback diver that helped kickstart the historic brand’s modern revival. Since the release of the Superman Heritage Blue, Yema has drastically increased the thickness of the brand’s catalog, especially with regard to the Superman line. The Yema Superman French Air Force Steel Limited Edition, reviewed here, is a standout in the collection not only because of its direct connection to the French military, but also because it comes equipped with Yema’s MBP1000 in-house automatic movement and tips the scales at just under $1000 USD.

Yema’s Superman line of dive watches stretches back to 1963 when Yema introduced a military diver with its unique bezel-lock mechanism that secures the bezel through a small bracket attached to the crown. Unscrew the crown and the bezel can rotate; screw down the crown and the bezel locks in place. It’s a simple solution that avoids the risk of accidentally rotating the timing bezel. Yema has been iterating on this now-classic design, producing the Superman in a wide range of materials, designs, and colorways. The Superman French Air Force is a special model in the line and limited to 1948 pieces with partial proceeds going to FOSA, the French Veterans Foundation. Designed in direct collaboration with the French Air Force and proudly made in France, this model of the Superman honors Yema’s long and storied history with the French military. 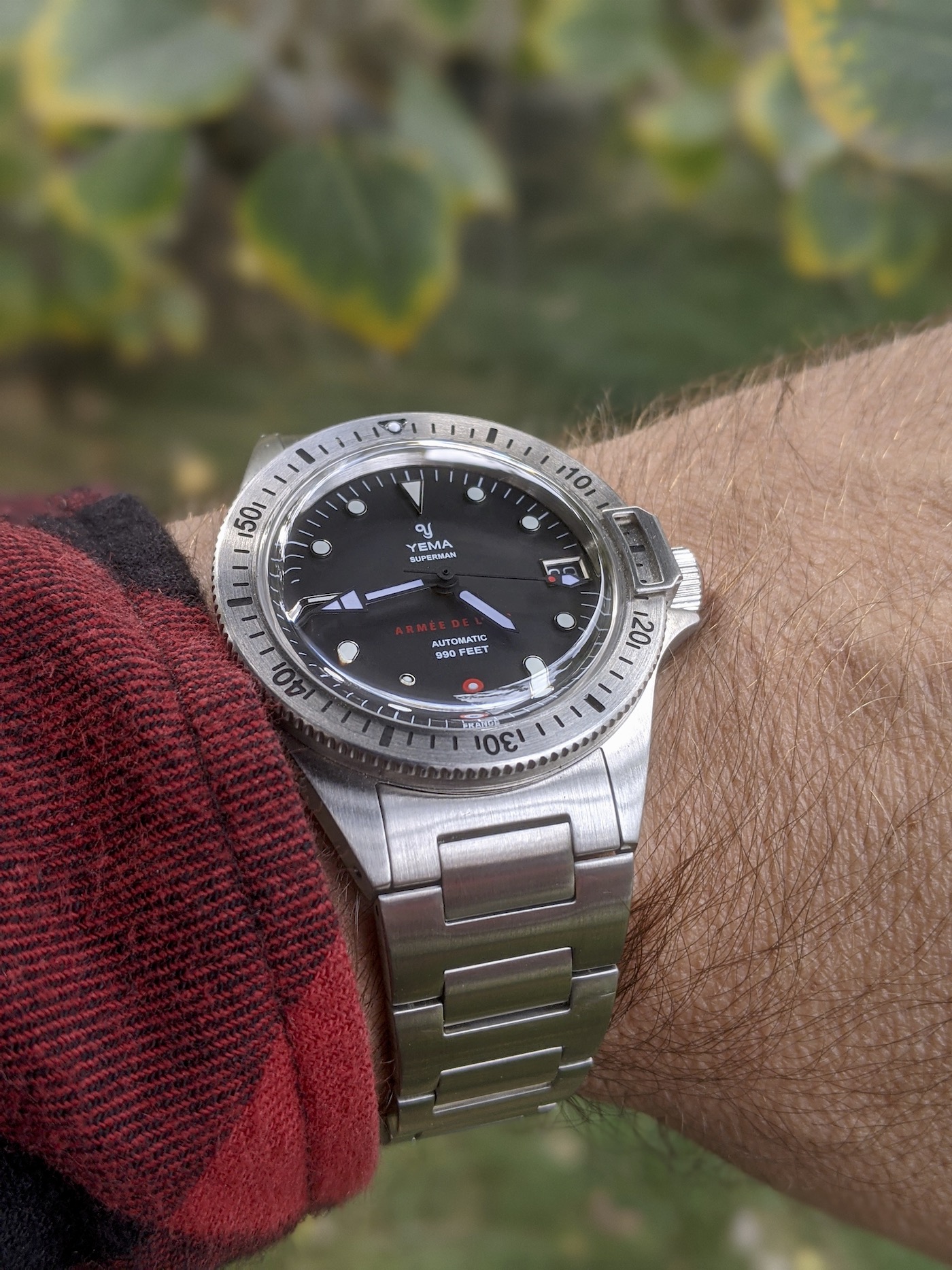 From above, the case design of the Yema Superman is familiar and straightforward in its execution with slender, graceful lugs on the 39mm diameter case, sharp lines, and brushed finishing throughout. However, things get interesting when you view the watch in profile, with a thin, sweeping midcase that moderates the height of the case, a visual effect that makes the watch wear slimmer than its 13mm height. Mind you, a 13mm height is perfectly acceptable for a 300m diver, it’s just that the case shape makes the watch wear slimmer. Kind of like my favorite shirt that hides the effects of my less-than-healthy diet during the last few months of COVID-19. The caseback is solid and displays a simple engraving of the French Air Force insignia above Armée de L’Air — a nice touch. My favorite little detail, however, is the red, white, and blue roundel on the crown. 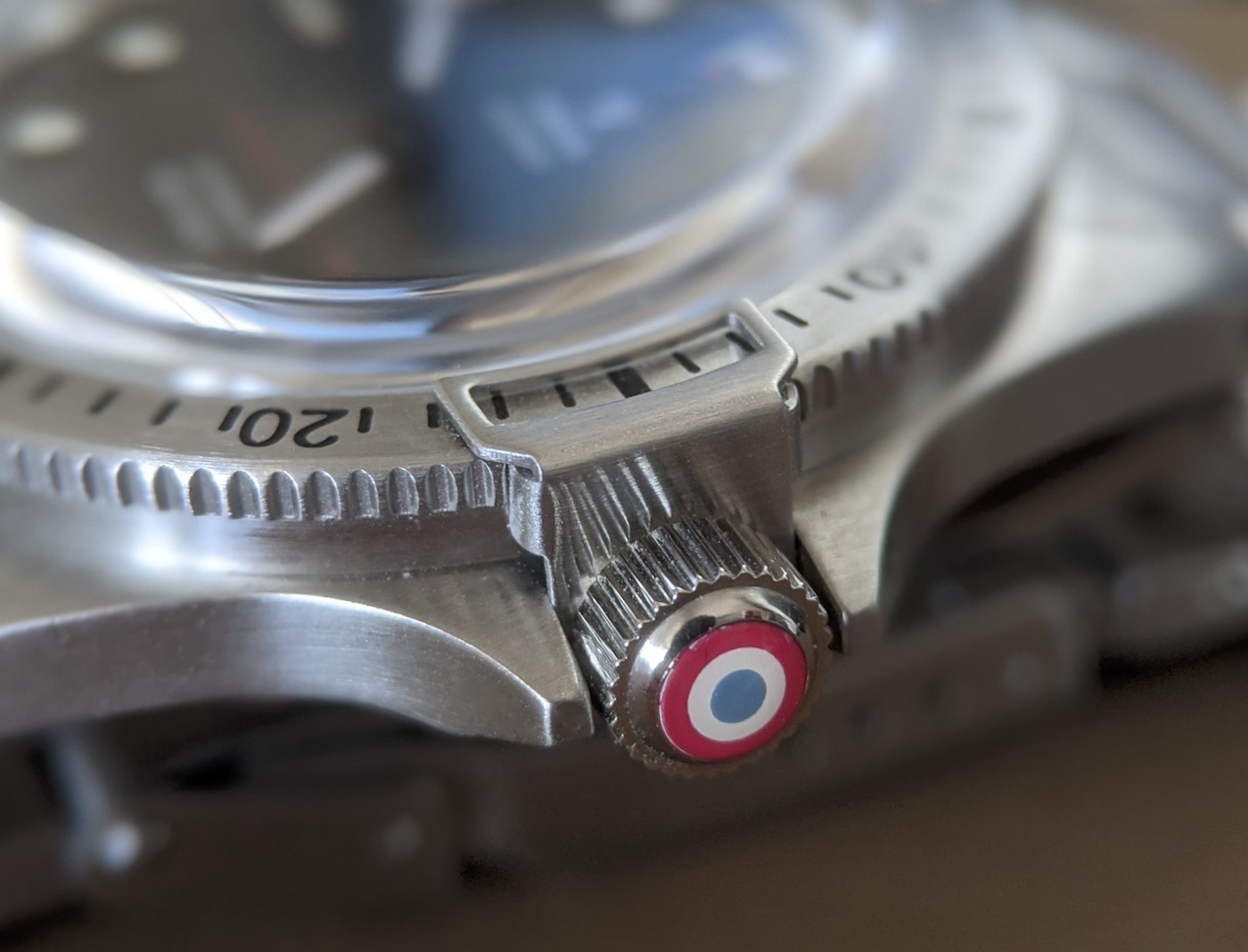 Though it shares the same case and bracelet as other Superman models, including the Superman Heritage Blue I reviewed previously, one of the elements that sets this limited edition apart is the inclusion of brushed surfaces throughout. This brushing extends across the entirety of the case, including the steel bezel, and throughout the bracelet. The result is a watch that appears significantly more modern and tactical than the heritage pieces that feature an abundance of polished surfaces. The brushing is fitting for a piece designed specifically as a military watch, and the steel bezel is a practical choice that won’t show scratches as quickly after hard wear. 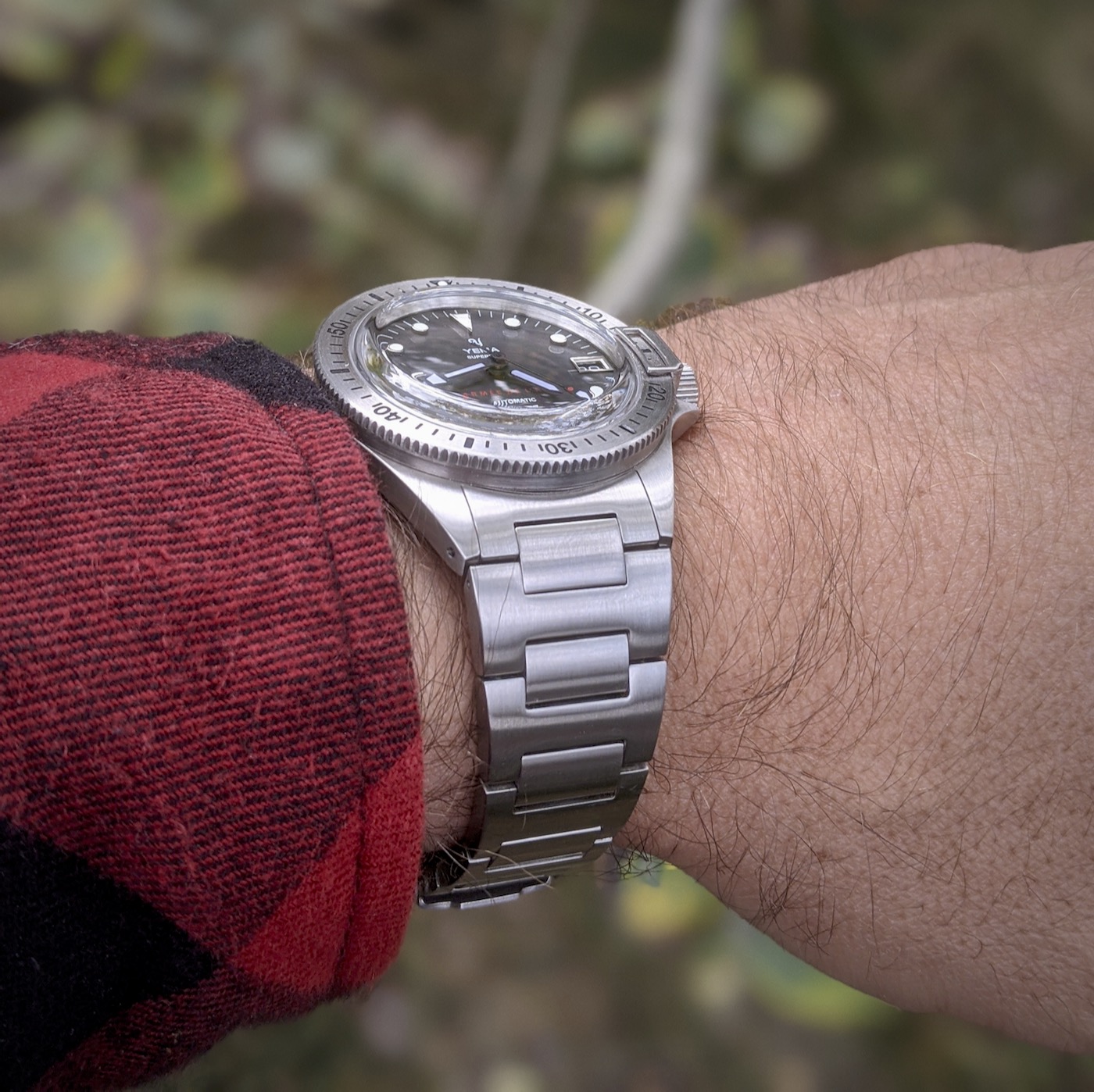 I was critical of the bracelet in my original review of the Superman Heritage Blue, and my views on that front haven’t changed. The bracelet is comfortable on the wrist and has a nice taper, but it’s let down by a few issues: 19mm lug-width that makes finding straps a challenge, a connection at the end links that doesn’t allow the bracelet to drape as nicely as it could, pin and collar connection on the links, and a simple stamped clasp. The $1,000 price point is extremely competitive and, frankly, the bracelet leaves me wanting. For those who aren’t big bracelet fans anyway, the drilled lugs allow for quick strap changes and this watch would look killer on NATO-style or Marine Nationale straps. 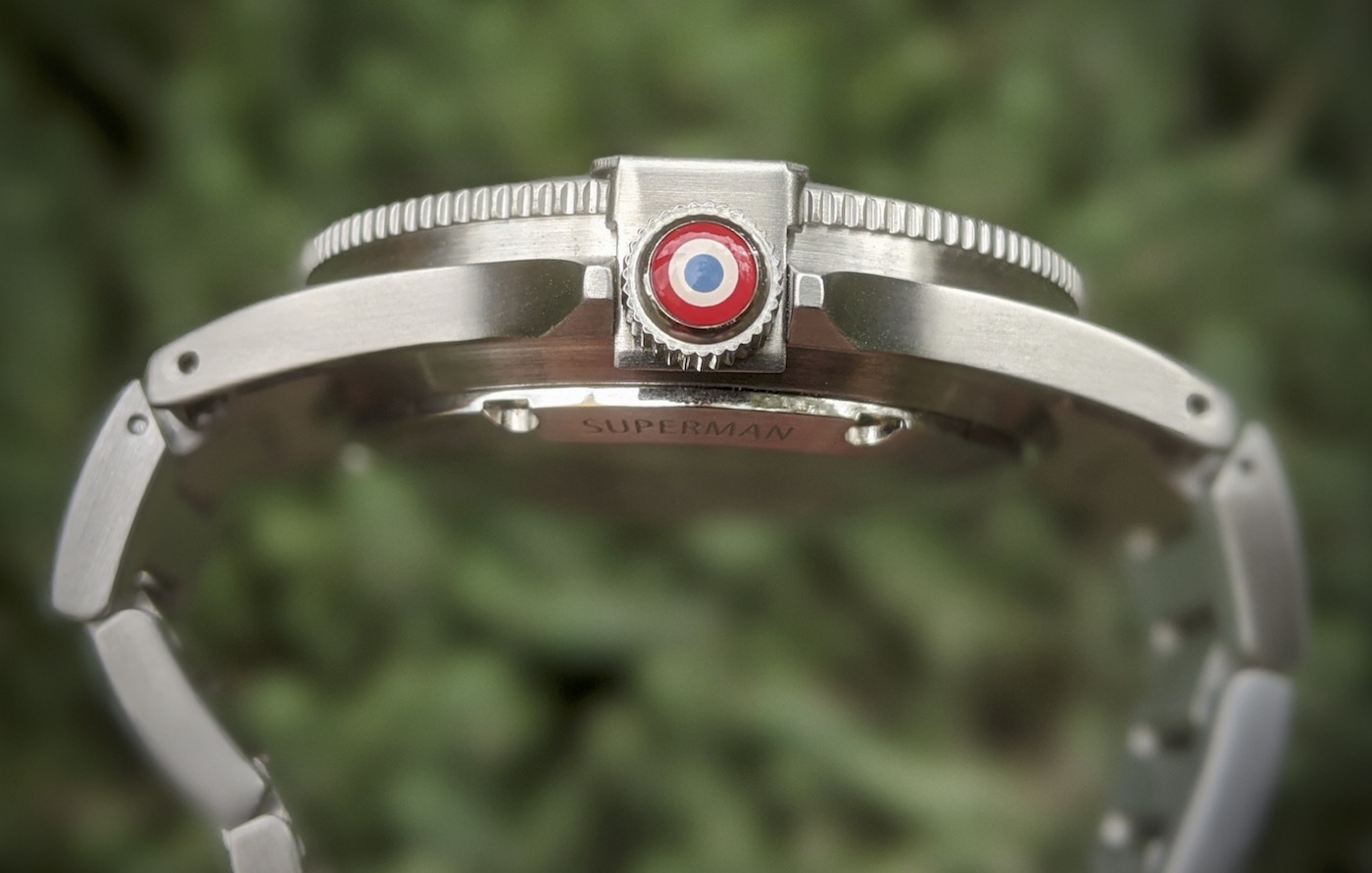 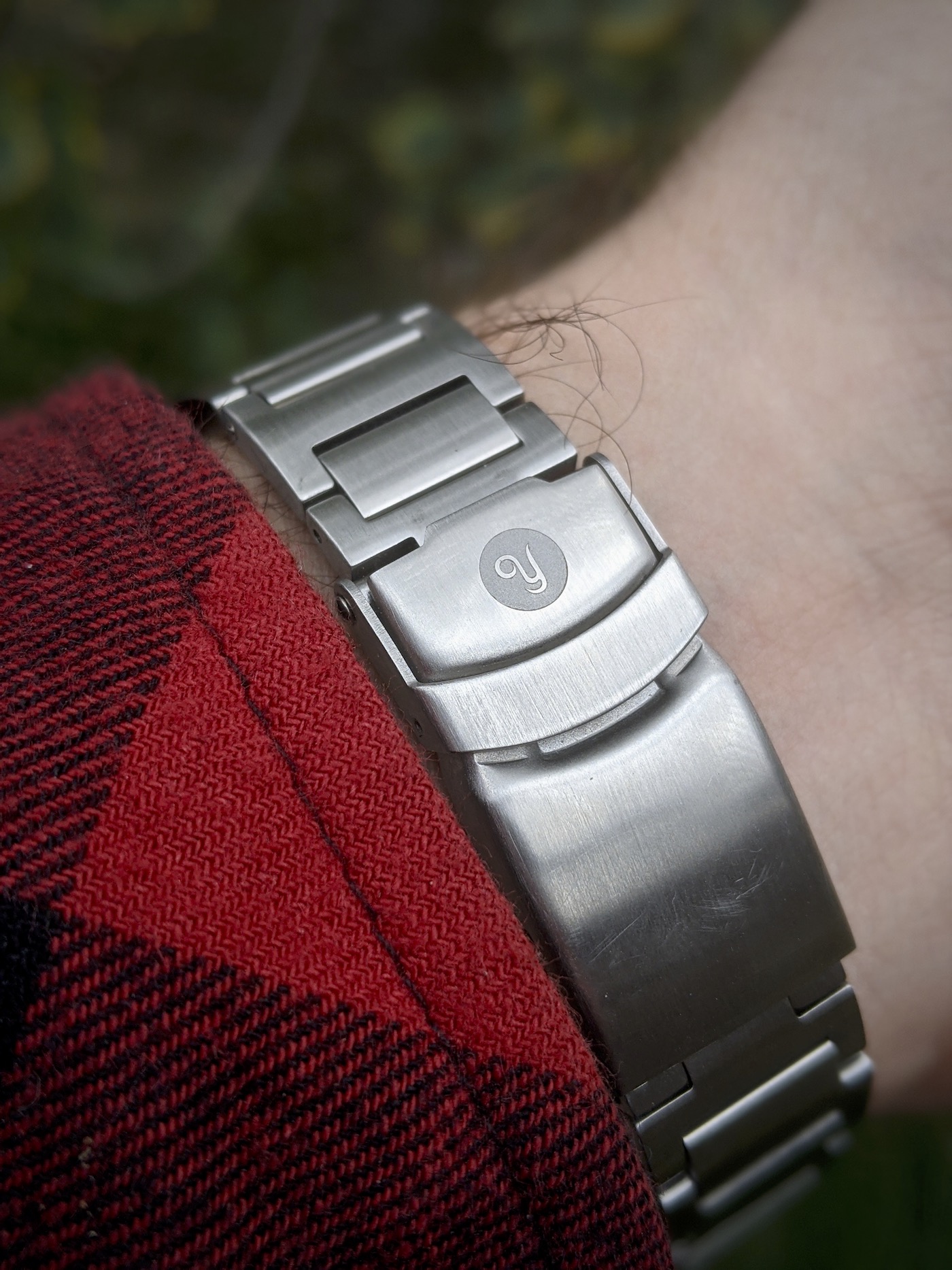 One thing that is definitely a surprise to find at this price point is an in-house automatic movement. Yema spent €3 million and several years developing its caliber MBP1000. Designed and assembled in France. The MBP1000 features 31 jewels, beats at 28.8kbph, houses a 45-hour power reserve, and is adjusted before and after assembly to a daily rate of +/- 12 seconds per day. In-house calibers are a bit of a mixed bag. On the one hand, they have become status symbol for watch brands, allowing them to showcase their watchmaking prowess. On the other hand, it can be more difficult to know how an in-house caliber will stand the test of time compared to tried-and-true options like a Miyota 9015 or ETA 2824-2. Also, finding parts and servicing in-house movements can be a tricky proposition that often requires sending the watch back to the manufacturer. One last thing to note is that Yema is currently developing a second-generation caliber, the MBP2000 that will supplant the MBP1000. However, the movements are interchangeable and owners can choose to upgrade the movement when it comes time to service. 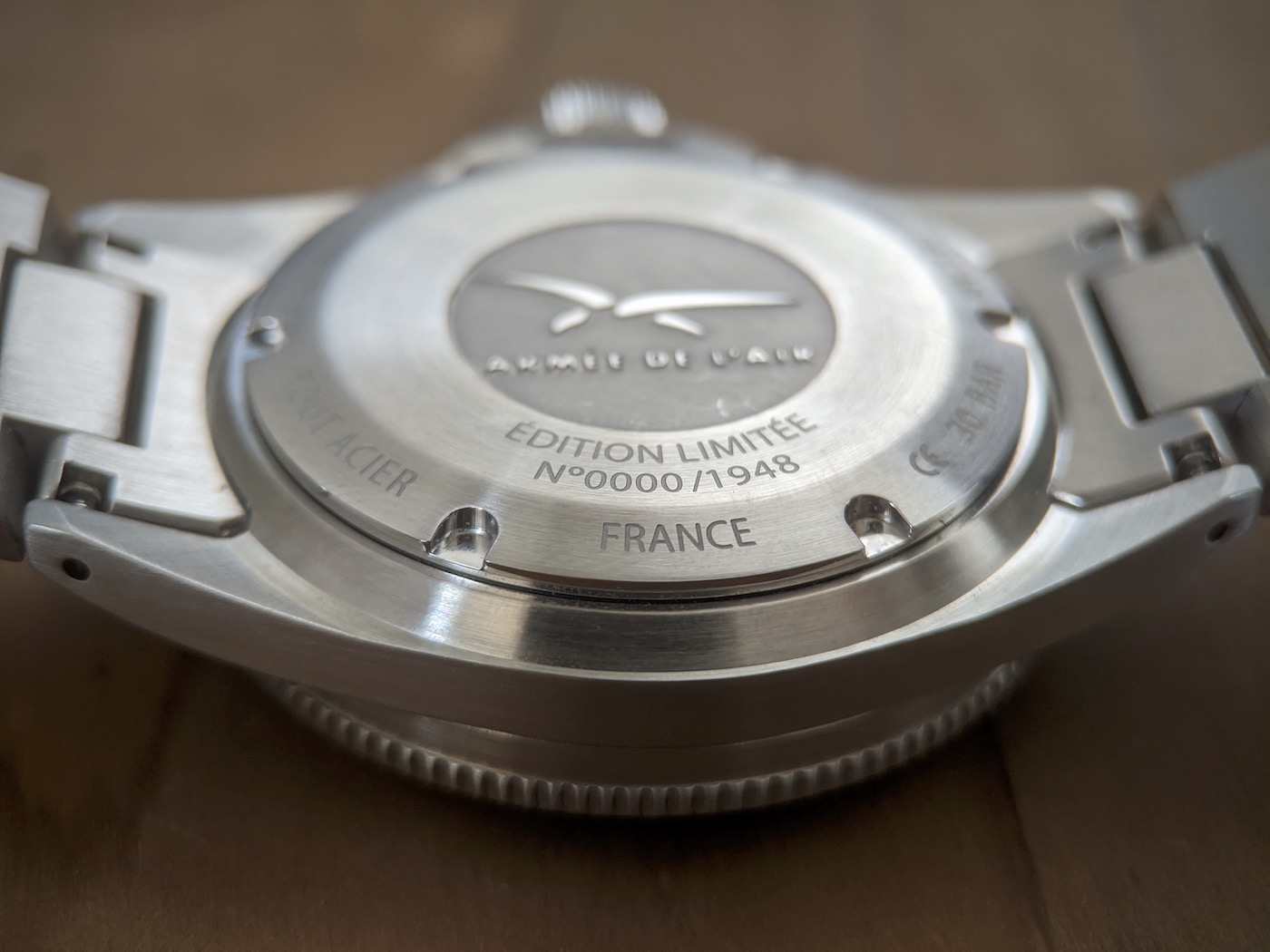 Beneath the gorgeous box sapphire lies a distinctive gray dial with a few special touches. The dial layout is familiar for a diver, consisting primarily of applied circular hour markers with a rectangular marker at 9 o’clock and triangle at 12 o’clock. The visual interest comes in when we get to the details. The color Yema chose for the dial is a pleasure to view, alternating from a deep anthracite to a stormy gray, depending on the light. Sometimes collaborative limited-edition pieces can be overdone, but the visual cues here are subtle and welcome, with a red, white, and blue Tricolore roundel at 6 o’clock that has been used by the French Airforce since before WWI. 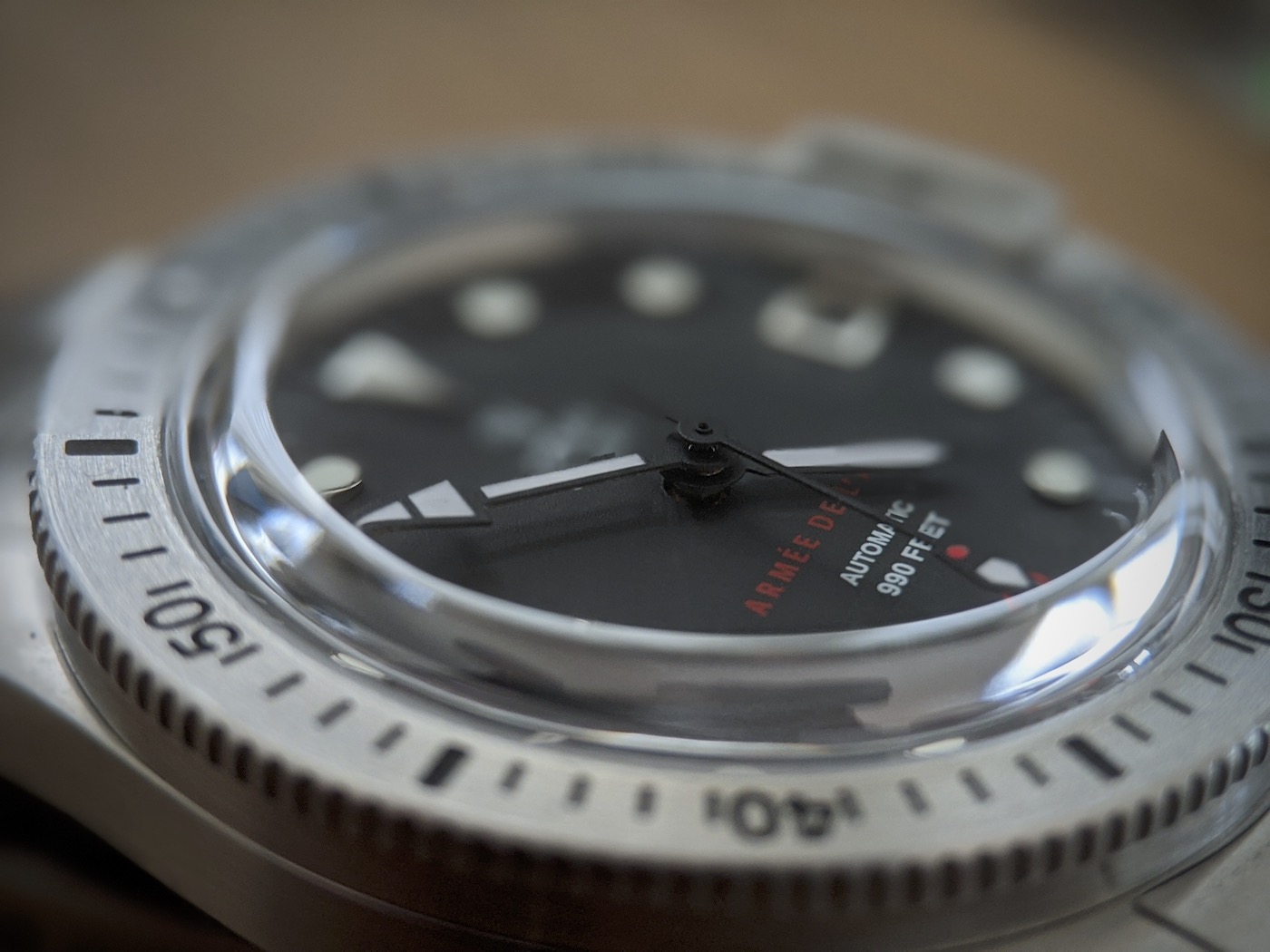 There is a fair bit of text on the dial, but it doesn’t feel cluttered. The top half of the dial contains the Yema logo and name with the Superman designation below. The lower half of the dial notes the automatic movement and 990ft of water resistance, but atop those two lines of text in red is another nod to the Armée de L’Air. Though I’m often a critic of overused red highlights, it works here, playing off the red on the roundel at 6 o’clock and red lume on the stoplight seconds hand. Speaking of the handset, this is an element I really appreciate across the Superman line. The hands are unique, easily distinguishable, and simply attractive. Here they’re finished in black surrounds that are in line with the functional military aesthetic. As much as I appreciate them visually, there is one issue that I need to point out. The Super-LumiNova C1 used on the markers and hands are slightly different with pure white hands compared to the just-slightly-off-white markers. The difference isn’t huge, but it is noticeable. 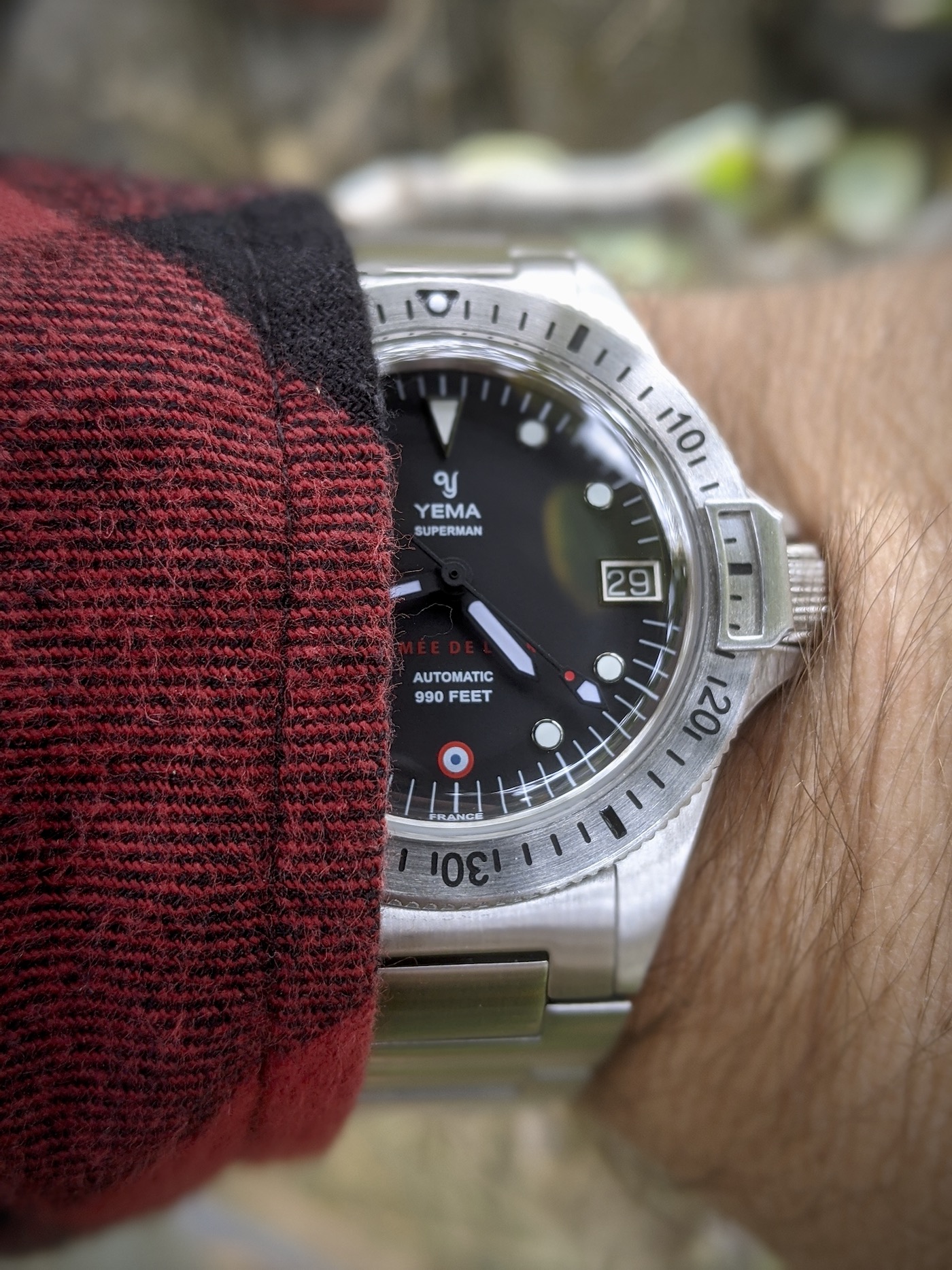 There is no shortage of options in the ~$1000 price range if you’re looking for a vintage-inspired diver. Though lacking the military collaboration you’ll find on the Yema French Air Force, the two watches that come immediately to mind are the DOXA Sub 200 ($990 USD) and the recent Seiko SBDC101 62MAS reissue ($1,170). All are vintage-inspired divers, but they couldn’t be more different in terms of design and execution. Looking for a versatile diver that can be dressed up? Choose the Seiko. A fun and funky summer watch? DOXA would be my choice. Military tool diver? Yema’s a solid option with an authentic link to the French Air Force. 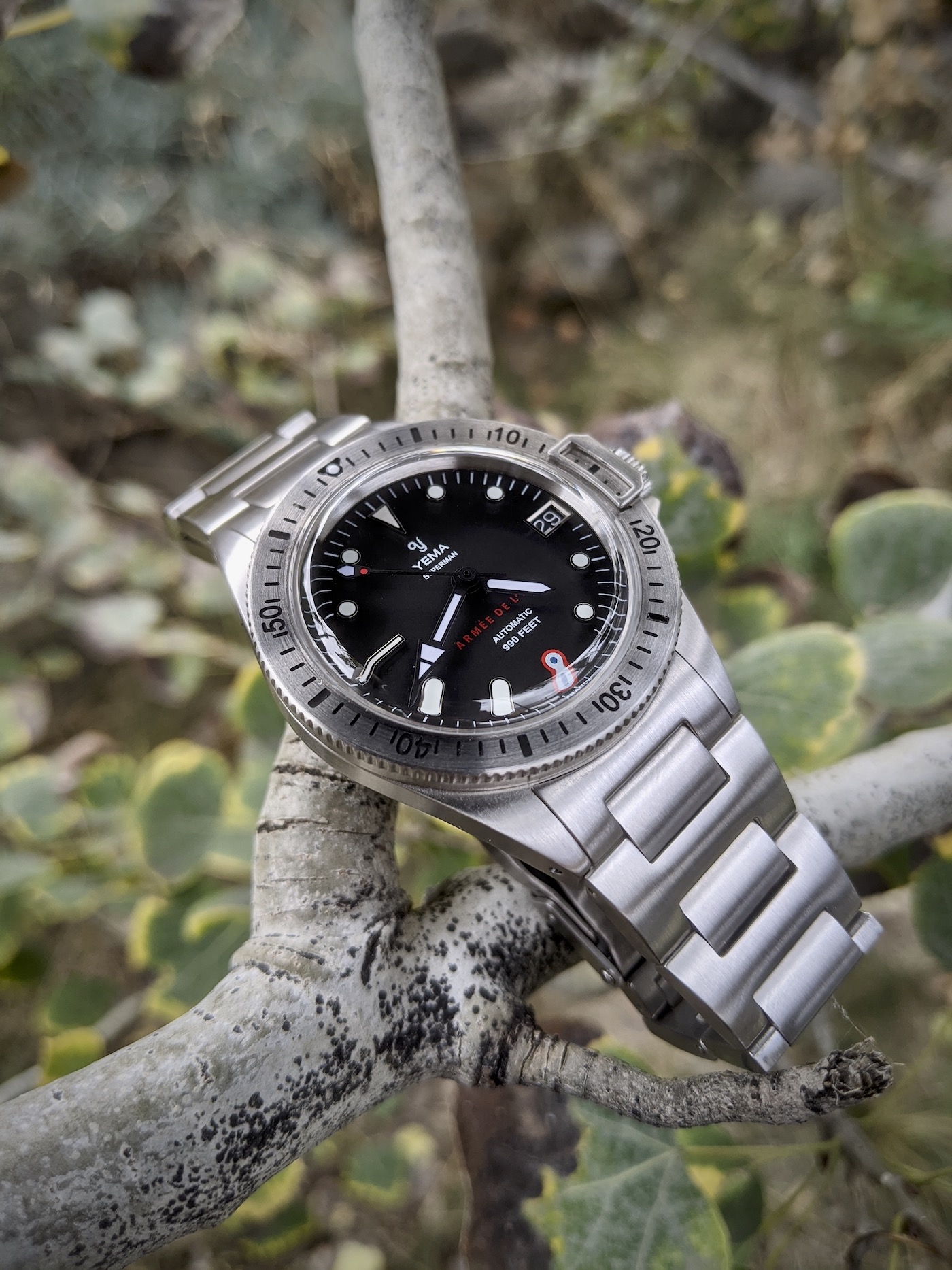 If you have an affinity for military history and a penchant for French design, the Yema Superman French Air Force is definitely worth a look. Considering you’re getting a French made watch with an in-house caliber and a direct (but not overdone) link to the French Air Force at just under $1000, the Superman is definitely an interesting proposition. If none of that matters to you, the Yema Superman Air Force is simply a good-looking watch with an attractive colorway and interesting visual details. The Yema Superman French Air Force comes in at $999 USD and 12.5% of total sales will go to support FOSA, the French Veterans Foundation; for more information, be sure to check out the brand’s website.

Necessary Data
>Brand: Yema
>Model: French Air Force Special Edition
>Price: $999
>Size: 39mm width, 13mm height, 48mm lug-to-lug
>When reviewer would personally wear it: When wearing casual clothes or heading outdoors.
>Friend we’d recommend it to first: A fan of all things French or someone that enjoys modern military watches with a link to the past.
>Best characteristic of watch: Integration of the French Air Force roundel.
>Worst characteristic of watch: The bracelet.