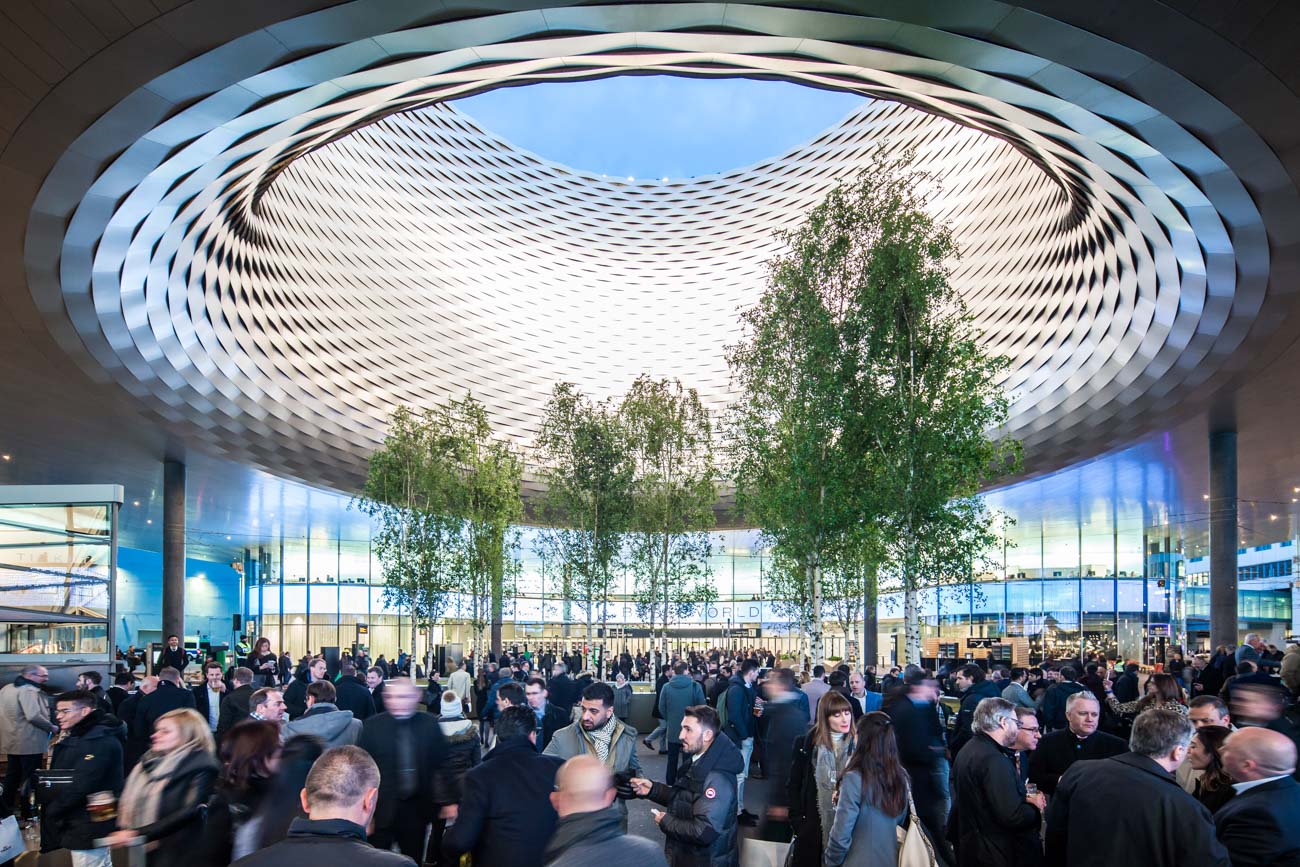 2020 has been a shaky year so far for the Baselworld trade show. Several of the industry’s largest brands have announced their withdrawal from the tentpole event, citing reasons from scheduling conflicts to new marketing strategies with an increased emphasis on single-brand events. In addition, the past several weeks have seen several major watch industry events, including Swatch Group’s Time to Move show and the Grand Seiko Summit in Japan, cancelled due to mounting concerns about the ongoing global coronavirus epidemic. While tensions throughout the watch world may be high, Baselworld representatives announced in an official statement this week that the show will occur as scheduled from April 30 through May 5 in Basel, Switzerland, and further reassures attendees that a comprehensive set of precautions and an emergency health action plan is in place in case of further virus outbreak.

On a related note, aBlogtoWatch has contacted several brands scheduled to display at the Watches & Wonders (formerly SIHH) show, slated for April 25 through April 29 in Geneva, all of which confirm that preparations for that show are proceeding normally. An official statement reconfirming the schedule of the show is expected from Watches & Wonders by the end of the month. 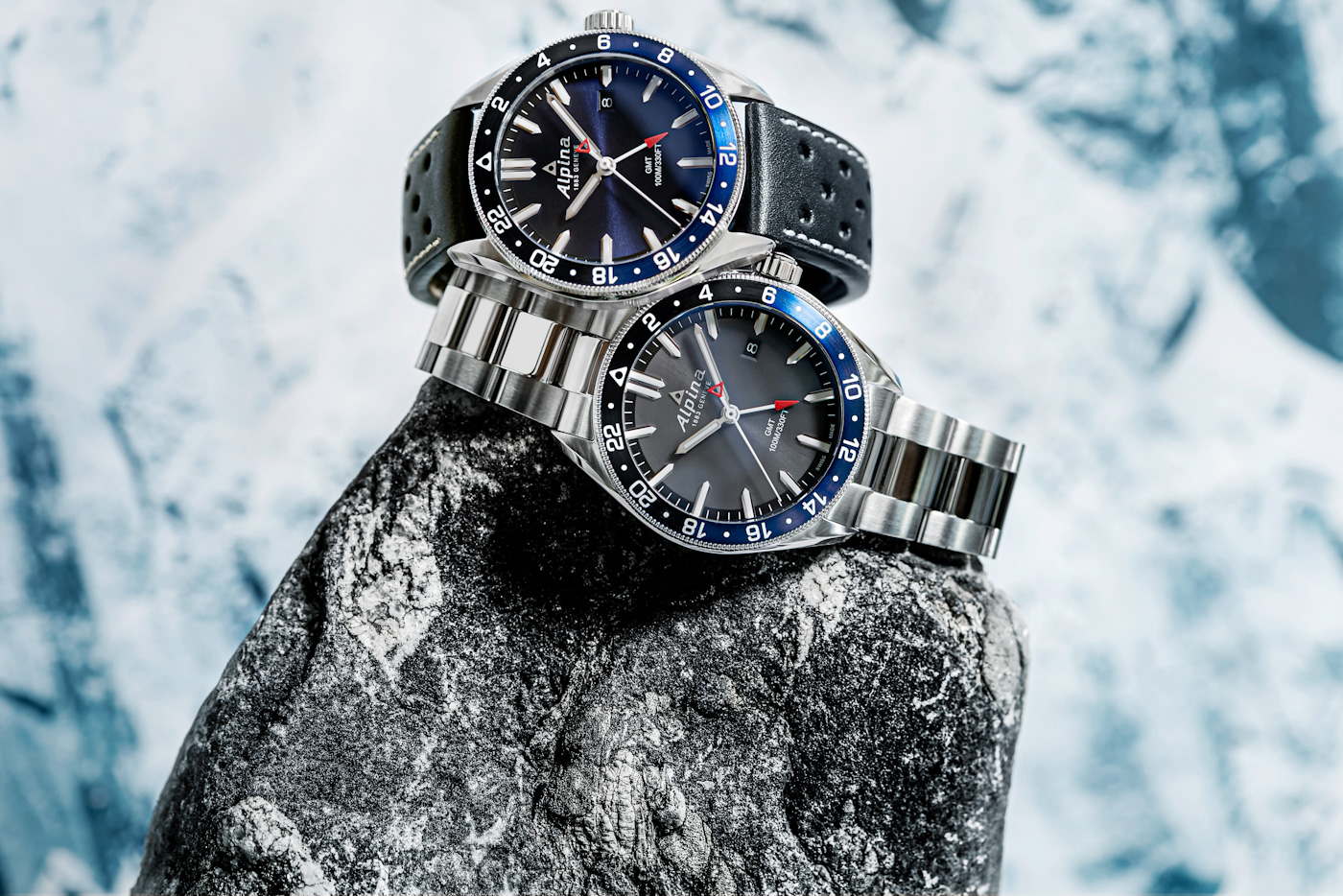 Since debuting the modern Alpiner Quartz line last year, Alpina has made concerted efforts toward making the line its primary entry level sports watch range. As part of this ongoing effort, Alpina introduced the new Alpiner Quartz GMT this week, adding solid travel functionality to this dependable sporty design. Three variants of the watch have been unveiled, all sharing the same 42 mm stainless steel case in either a brushed or polished finish. All three models feature a bidirectional 24 hour bezel in “Batman” blue and black, as well as 100 meters of water resistance. The dial designs of all three models cleanly interpret Alpina’s modern Alpiner design language while adding colorful personality in one of two styles. The slate gray sunburst feels like the more aggressive and purposeful option, while the sunburst navy blue injects a touch of dressiness to the mix. Alpina offers both the gray and navy dial variants on an oyster style bracelet, while the navy dial is also presented with a rugged black rally strap with contrast stitching. All three models are available now through Alpina’s authorized dealers, and pricing starts at $970. 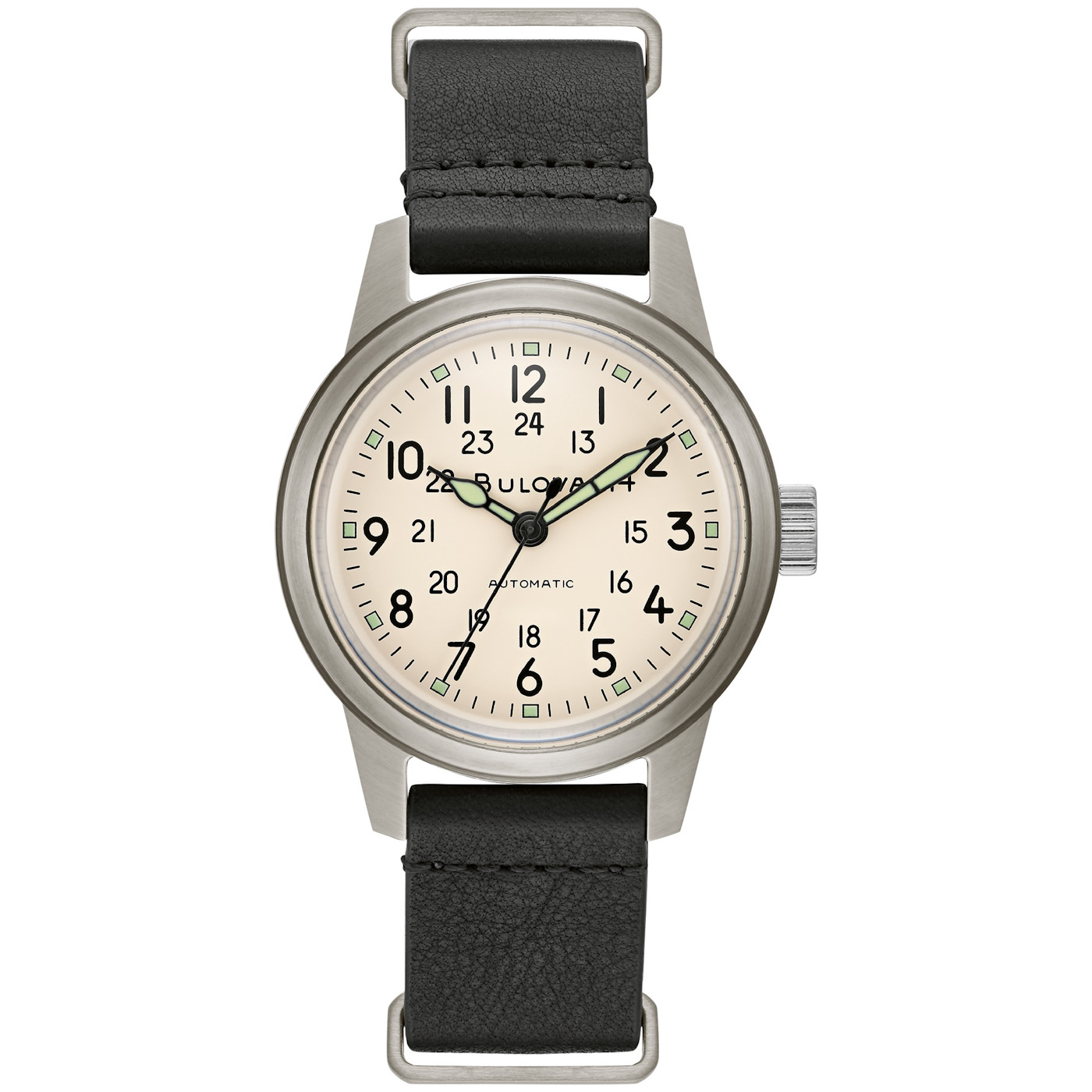 Bulova Revives the Classic Military 3818-A With New Hack Line

Few watch brands have as deep or as illustrious a connection with the US military as Bulova. For decades, the brand faithfully provided standard issue timepiece to American troops, developing historic models such as the clean, utilitarian 3818-A of the ’50s and ’60s. As part of its current effort to revive its heritage, Bulova reintroduced the 3818-A design this week as the Bulova Hack. The 38 mm case harks back to the clean, compact style of the original, with an oversized crown for easy operation with gloves. The dial, in both black and off white versions, captures the simple and functional style of midcentury military timepieces well, while also maintaining the playful lumed spade hands of the original for a uniquely Bulova personality. As the name suggests, the Bulova Hack is powered by a hacking mechanical movement, the Miyota 8s20 automatic. Bulova pairs the Hack with a choice of either a black or olive drab leather NATO. The Bulova Hack is available now from authorized dealers, with prices starting at $395. 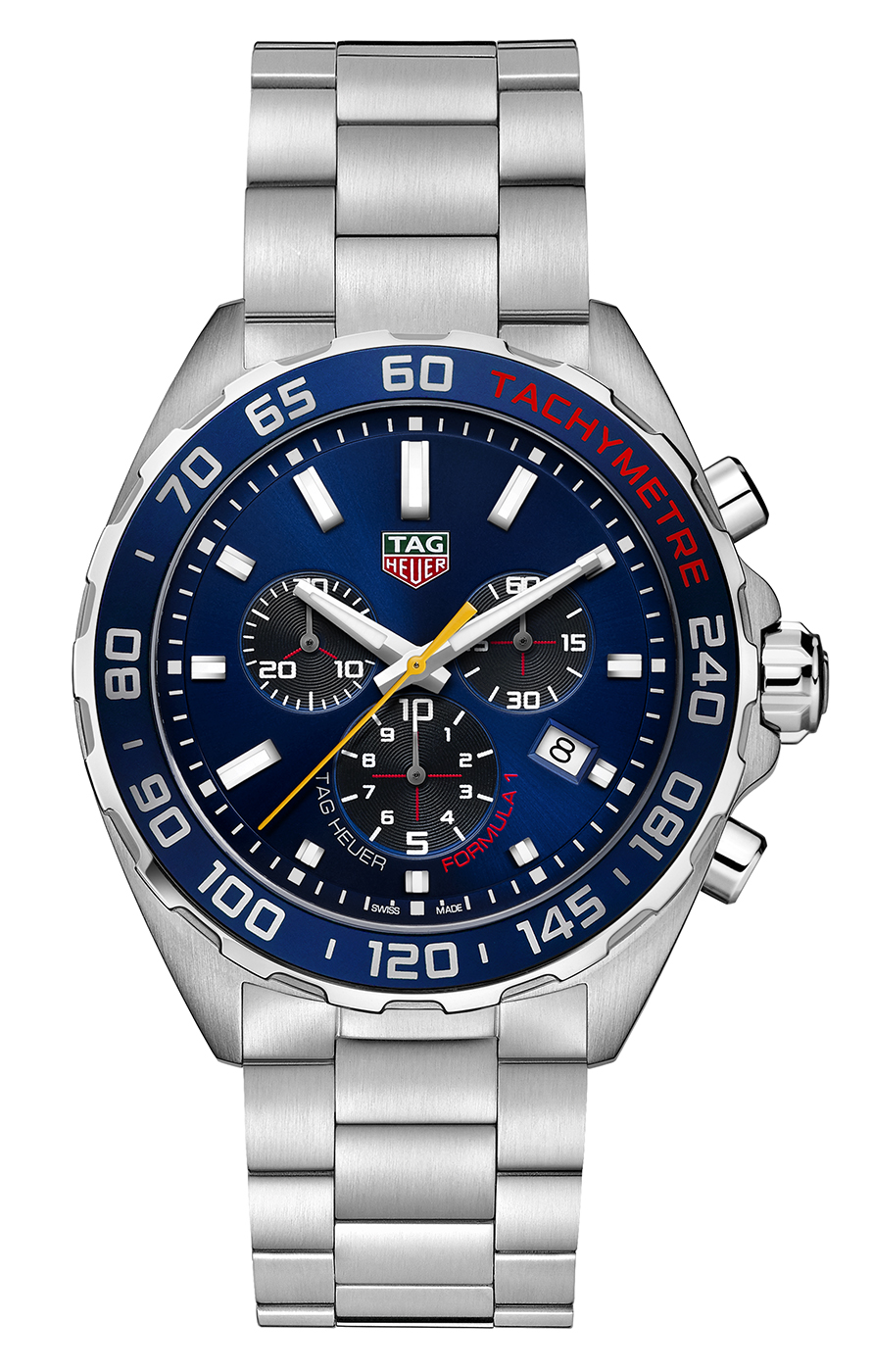 For the second time since becoming the team’s official sponsor in 2016, TAG Heuer announced this week it will release a commemorative watch in honor of its brand partnership with the Aston Martin Red Bull Racing Formula 1 team. The TAG Heuer Formula 1 Aston Martin Red Bull Racing Special Edition 2020 is a surprisingly restrained design, holding over nearly every cue from the standard Formula 1 quartz chronograph line but adding a sporty new blue sunburst, yellow, and red color scheme to mimic the newly unveiled Red Bull RB16 Formula 1 car. Outside of the new dial and bezel colors, the only notable changes to the Formula 1 Aston Martin Red Bull Racing Special Edition 2020 are a unique caseback featuring the race team’s logo and a stainless steel bracelet featuring a “driver’s extension”, ostensibly for fitting on the outside of a racing fire suit. The watch will be priced at $1,700. 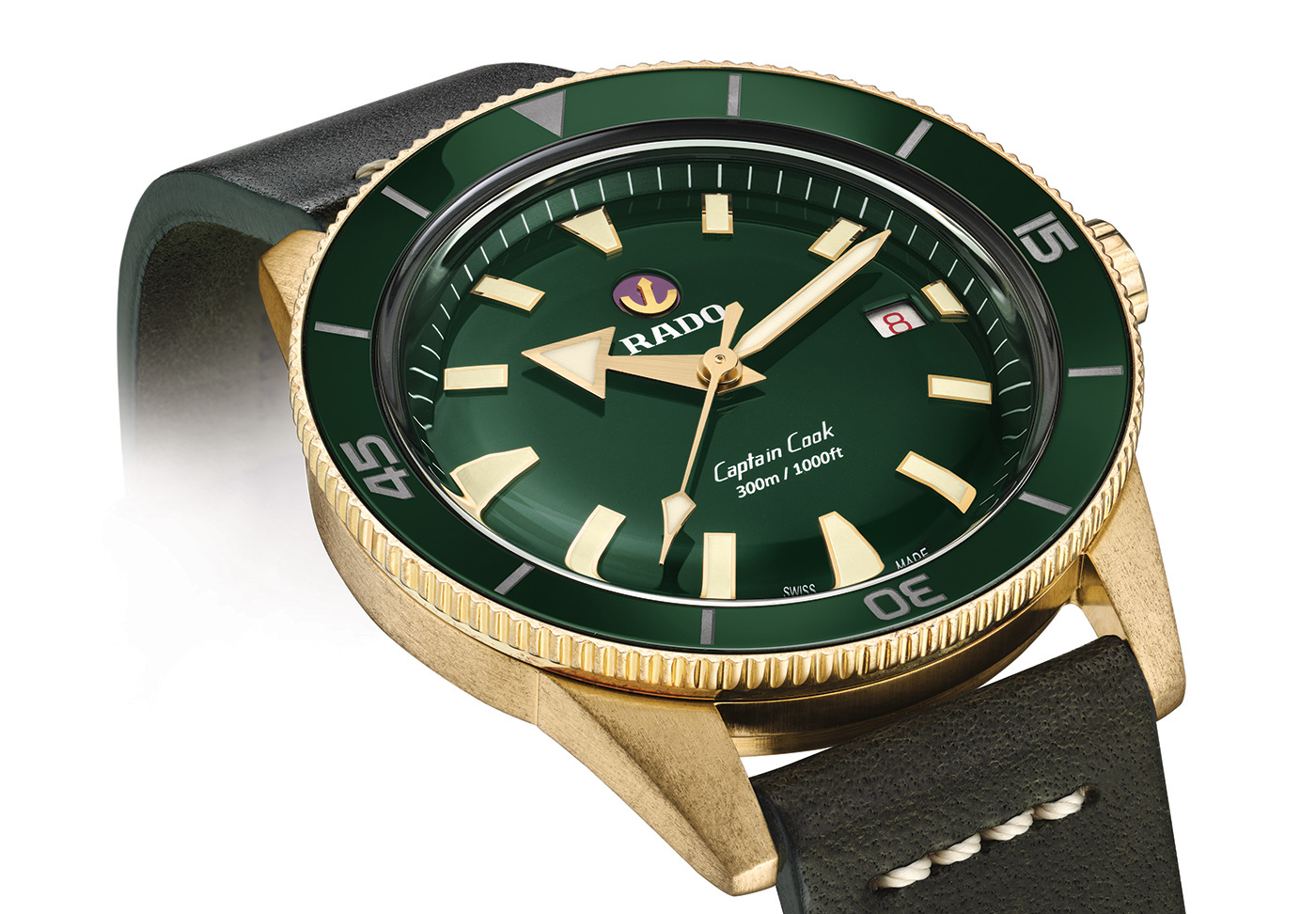 Despite only appearing on the scene in 2017, the revived Rado Captain Cook diver has already become a cult hit with enthusiasts thanks to its unique vintage styling, impressive build quality and solid value. Eager to keep the momentum going, Rado has released ten new variants on the line, split between the 37 mm and 42 mm case models. Without a doubt the stars of the new line are three 42 mm variants in bronze, with ceramic sunburst dials and bezels in deep forest green, royal blue, and warm gray. While bronze divers have been a trend for several years now, the bronze alloy used here by Rado is significantly more yellow than most, appearing almost like gold. Other standouts include a new series of ceramic dials and bezels for the 37 mm case style, featuring fumé blue, hunter green, and a stunning white fumé version. Lastly, the 42 mm stainless steel line receives new sunburst dial versions in black, green and blue, along with an interesting faded gray matte version exclusive to Revolution known as the “Ghost Captain.” The new models will be available through authorized dealers in April, with the new bronze iterations priced at $2,600. For more information, please visit the brand’s website.