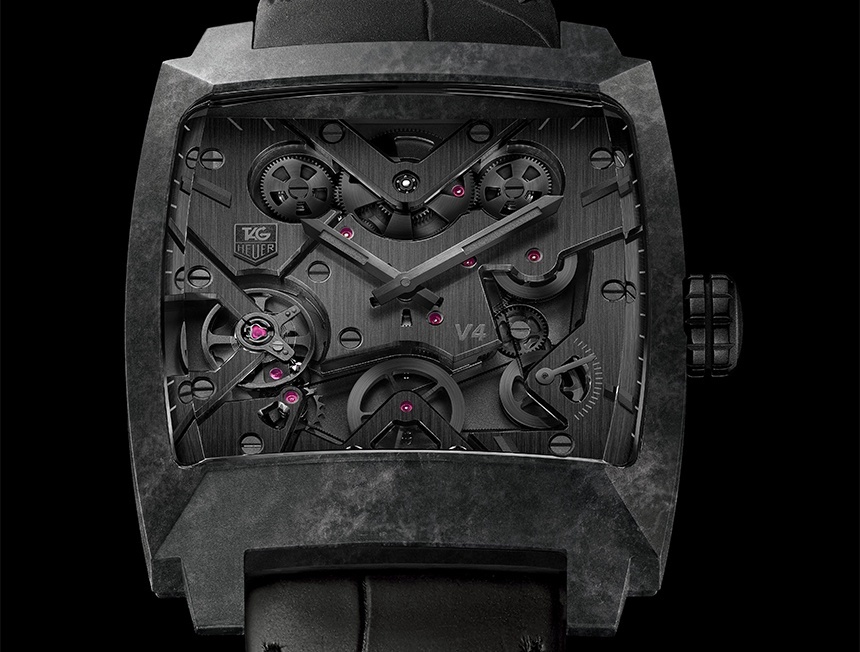 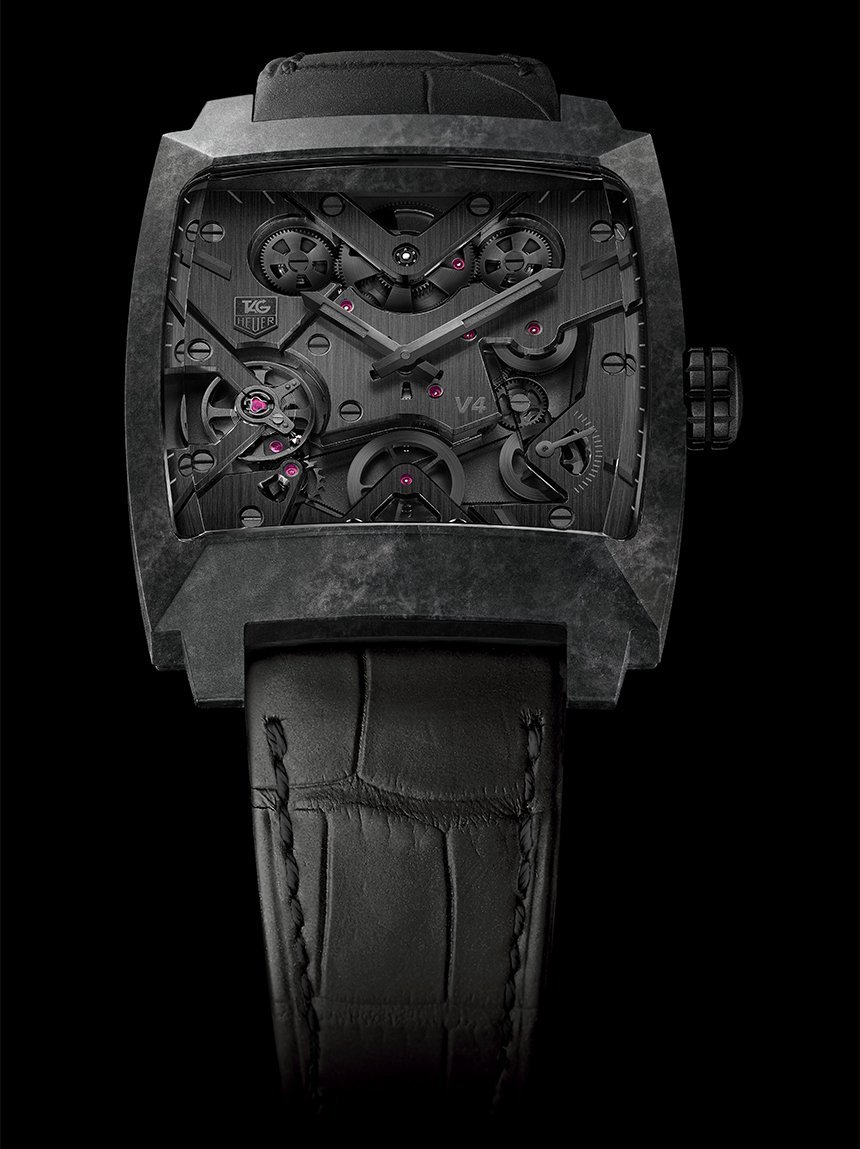 In the brand’s most recent in a series of horological U-turns, TAG Heuer has announced the Monaco V4 Phantom watch at Baselworld 2015, introducing a carbon matrix composite for the case and bridges. No to smartwatches, yes to smartwatches, refocus on entry-level luxury… The last year or so has seen a few oscillations at TAG Heuer, including this return to haute horology.

A year ago, Jean-Claude Biver, who heads LVMH’s watch brands, dismissed smart watches, saying that they would not stand the test of time, and that the brands under his watch would not make one. And now, the man just recently announced that TAG Heuer would release a smart watch to go up against the Apple Watch.

Last year, Biver also stated that TAG Heuer would focus on the entry-level market in the 1,500 to 3000 Swiss francs range, where it has historically been a leader. Accordingly, he canned the CH80 movement and therefore the Carrera CH80, the watch intended to house it that was eagerly anticipated by fans of the brand. 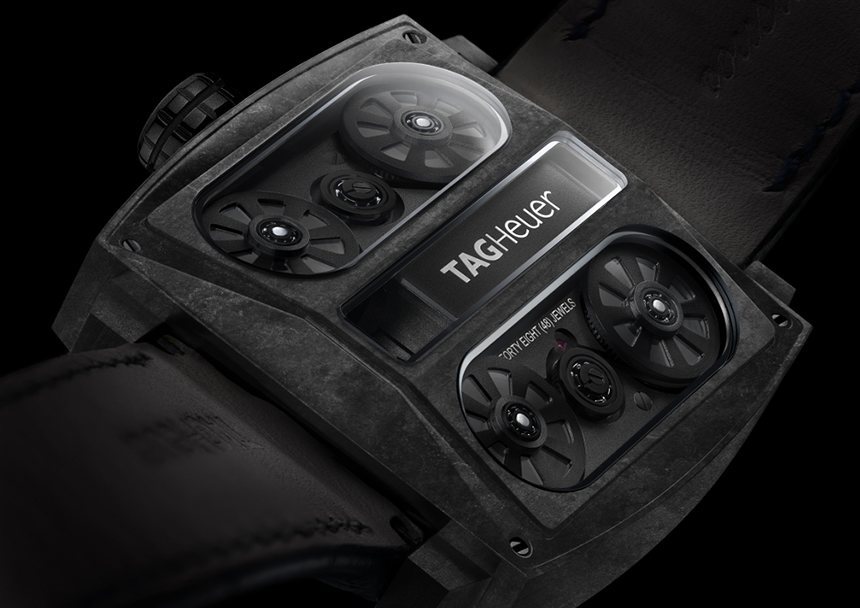 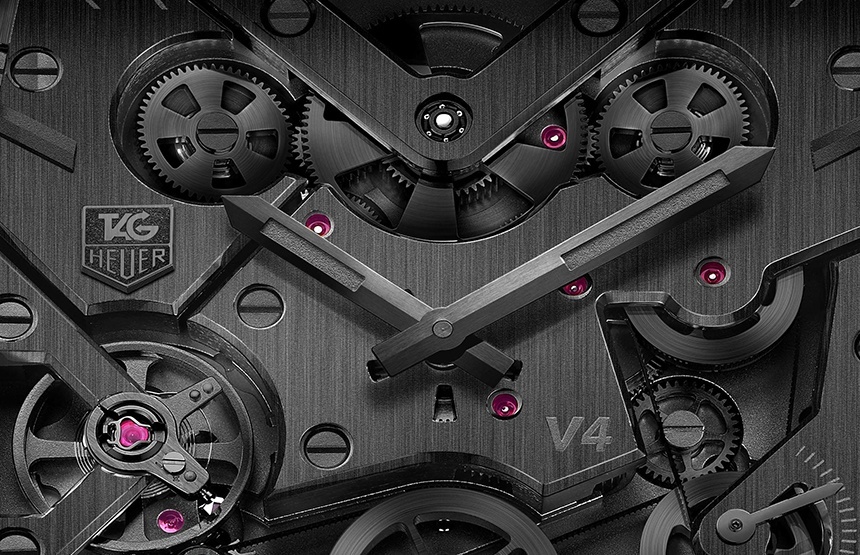 So what’s so special about the TAG Heuer Monaco V4 Phantom? We are glad you asked. You see, the carbon fiber used in the TAG Heuer Monaco V4 Phantom is a special kind called Carbon Matrix Composite (CMC), and not only is the case made out of this new material, but the seven bridges of its movement are made using CMC too. CMC is formed using a special technique where carbon fibers are placed in a certain direction in the mould and micro-blasted to give it an orderly elegant look that TAG Heuer calls “matte black vertical brushed.” This is obvious if one looks closely at the movement bridges that form the dial. The choice of material is not just for looks; by using carbon fiber for all the main components, the TAG Heuer Monaco V4 Phantom is also light. Furthermore, the extensive use of carbon fiber also encapsulates the essence of this watch very nicely as it was inspired by motor-racing and engines.

To match, the hands are satin-finished with a titanium carbide coating and filled with anthracite grey SuperLuminova. The only color comes from the red of the exposed jewels. To complete the watch’s all black look, it is offered with a matte black alligator strap with a deployant buckle finished with black titanium carbide coating. If you like stealthy watches that fly under the radar, they don’t get more “stealth” than this.

The 41mm TAG Heuer Monaco V4 Phantom will be subject to an initial run of 50 pieces and will be priced at $45,000. tagheuer.com