What Is Seiko Kinetic Direct Drive? An Evolved Quartz Kinetic Movement; The Answer Is Here 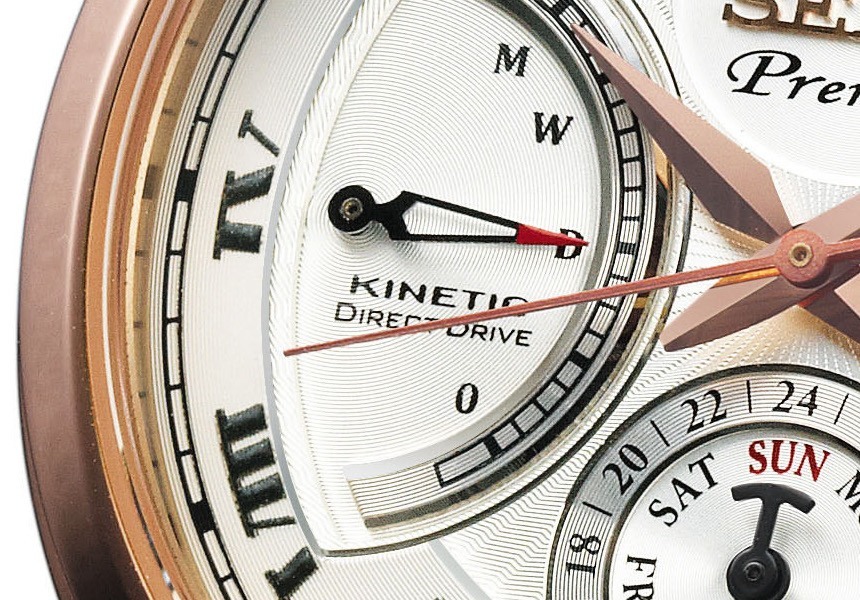 Before coming out with the Spring Drive movement, Seiko created the Kinetic movement. The idea was simple. Take the rotor from an automatic mechanical movement, and instead of having it wind a main spring, have it charge a battery. This relieved the owner of ever having to replace the watch battery, and gave them the accuracy of a quartz movement. The Kinetic movement was very successful for Seiko. Via the push of a button you could see how much of a charge remained in the battery. At the time the Kinetic was released in the mid 1990s, it was quite an innovation.

The Kinetic movement had some practical short comings however. First, other than the available charge indicator, and rotor to charge the battery, the watch did not have too many functional improvements. Unlike an automatic movement, you could not charge the watch by winding the crown manually. This meant you had to wear the watch, or oscillate it in your hand for a charge. So if you didn’t wear the Kinetic movement watch often, it would not be very useful to you. The Kinetic Direct drive solves this issue, and adds and interesting dimension of interactivity between watch and wearer.

The “Direct Drive” name comes from the fact that winding the crown of the watch directly charges the battery. Further still, you get to actually see how much power you just added to the battery with your winding. A sort of strength indicator is represented in the dynamic charge indicator gauge. The charge indicator gauge offers a few pieces of information based on what the user is doing. In its resting mode, it simply tells the user how much power is left measured by days or hours. The original Kinetic simply had a visual indicator, but nothing precise and it was not always visible. The Kinetic Direct Drive movement can store up to one month of power. So at the top of the indicator it has an “M” for month, which then goes to a “W” for week, then “D” for day, and then down to various numeric indicators for the number of hours left in the charge. This functionality is vastly improved over the original Kinetic movement.

While the user is manually winding the crown, the power gauge indicator takes another form. The hand on the gauge moves to show you how much power you are generating with each turn of the crown. Once you are done winding, the hand then tell you how much power you just generated total. After that the rest returns to its default position indicating how much total charge is left in the battery. This is really the type of unique functionality the Kinetic drive always needed. Seiko was able to provide useful, and simply pleasing information to the user, making ownership of a Kinetic Direct Drive based watch more visceral.

A more thorough explanation of the Seiko Kinetic Direct Drive movement can be found here.