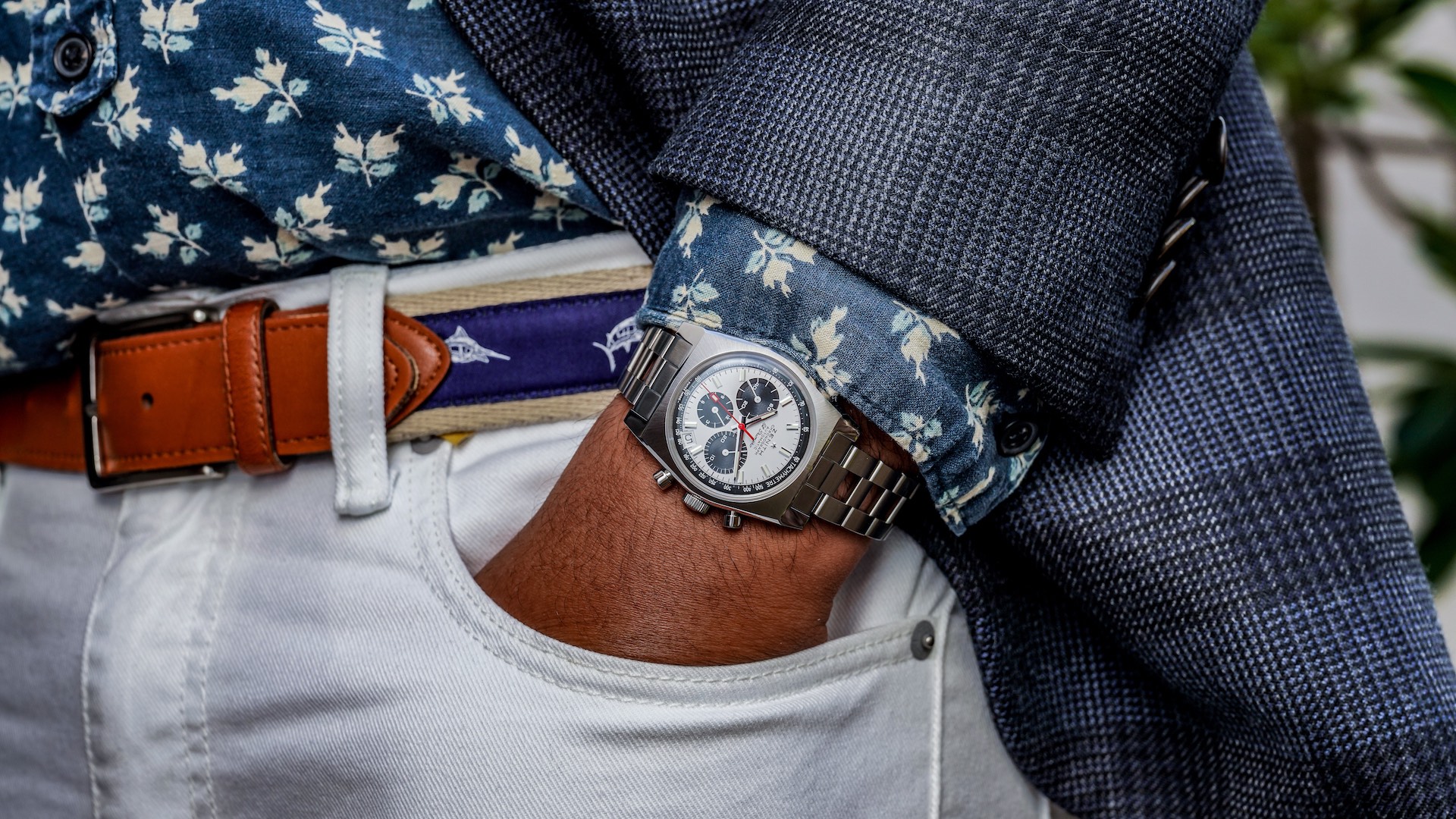 The just-released Zenith El Primero A384 Revival on Gay Frères ladder bracelet is a true homage to the idiosyncratic design and aesthetic styles that came around in the late 1960s. This watch was initially released last year in 2019, but we are just now seeing this bracelet on the “revival” of the very first El Primero from 1969. The angled Tonneau-shape case and open design “ladder” bracelet of the A384 Revival offers the provenance of the El Primero 400 movement and modern finishing/build quality in a retro-inspired package that balances classic and quirky. 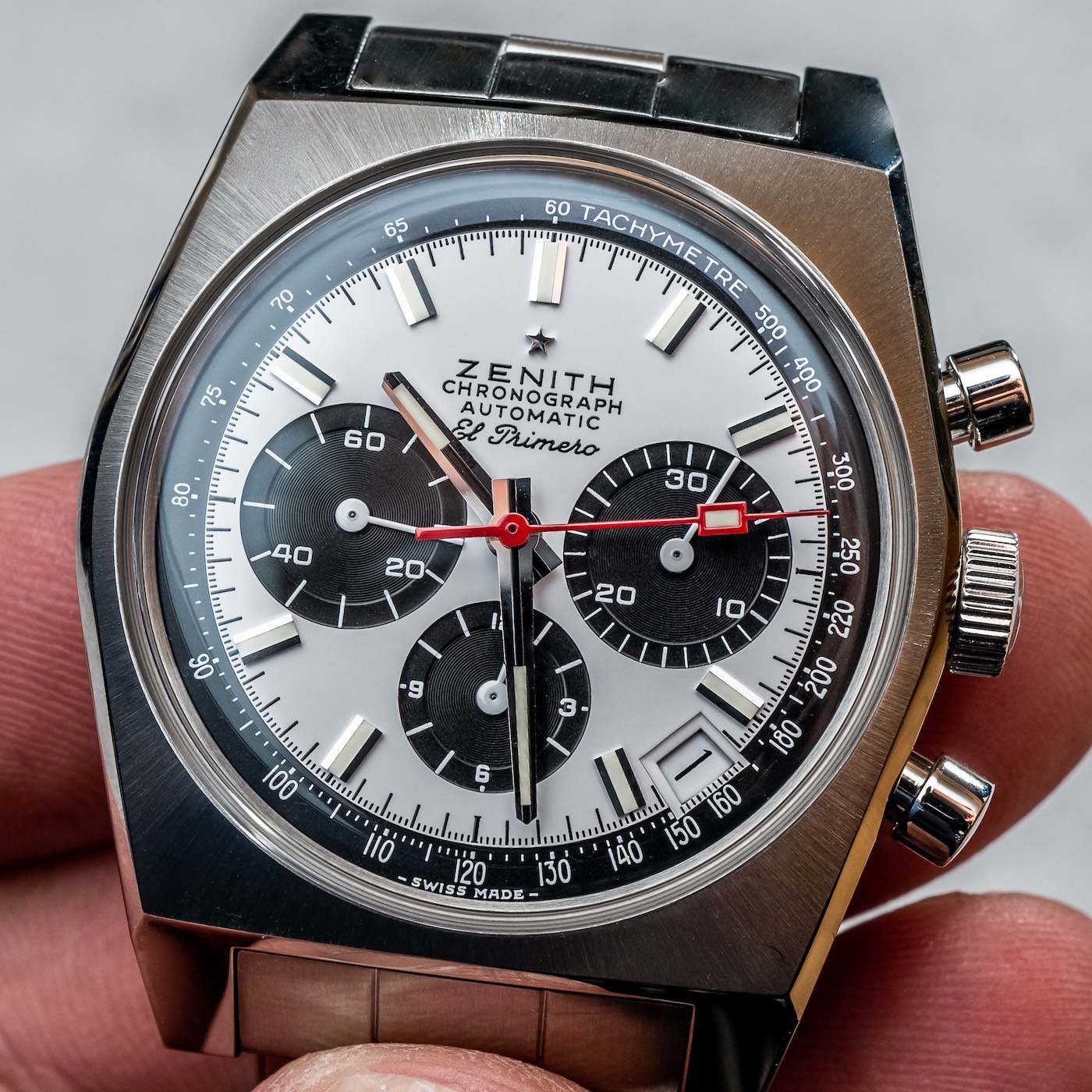 For some historical context, the A384 was the first El Primero movement watch alongside the A385 (same case, brown dial) and the iconic, everyone-knows-it A386 that had the box-set re-release last year for the 50th Anniversary of the El Primero. The A384 was only produced from 1969 through 1971 and there are said to be fewer than 3,000 pieces ever produced. Fortunately, the Zenith El Primero A384 Revival isn’t limited. 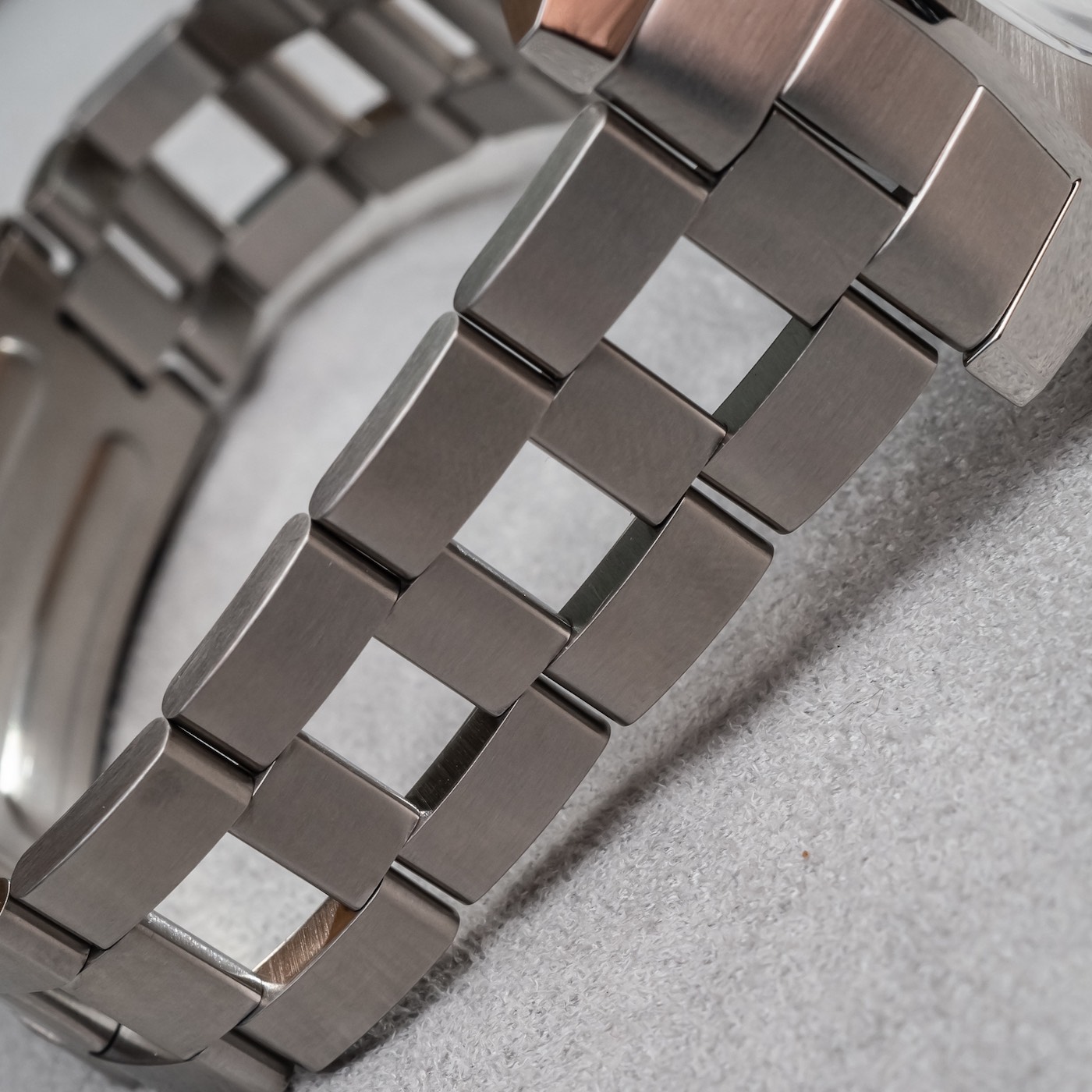 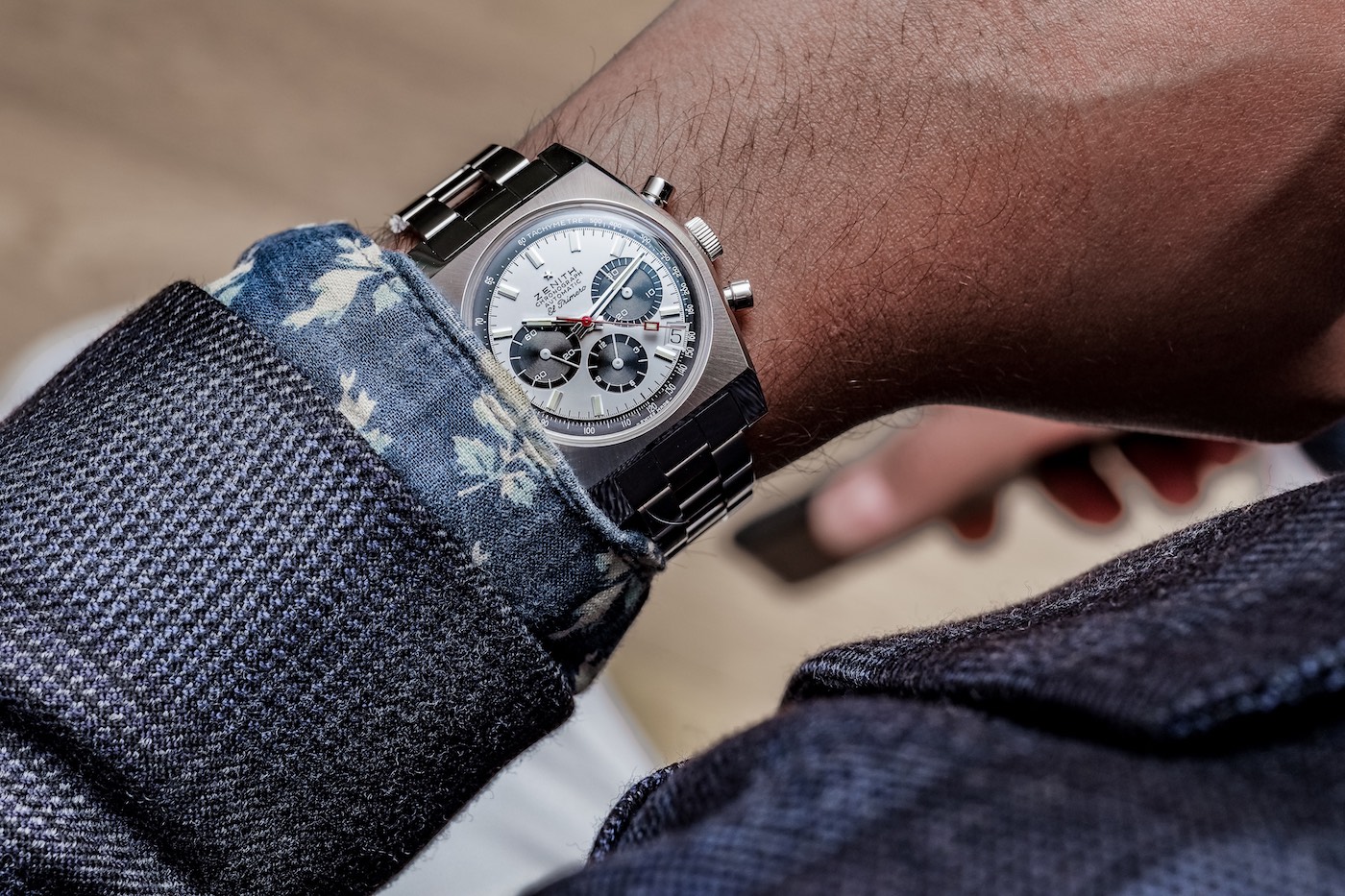 There aren’t many watch bracelet makers whom enthusiasts, let alone casual fans, would know by name, but Gay Frères is up there. It was the first bracelet supplier for Rolex in the 1930s and 1940s, supplying what can reasonably be described as the proto-Oyster bracelet (decades later in 1998, Rolex would outright purchase the firm). Frères also did work for the other big boys, creating bracelets for Patek Philippe and Vacheron Constantin. Fun fact: Way back in 2016, the most expensive watch sold was the Patek Philippe 1518 (which sold for the pauper’s fortune of $11 million) that had a Gay Frères beads-of-rice bracelet. Frères did takes on the beads-of-rice style in the mid-20th century, most notably for Heuer.

Oh, Gay Frères was also instrumental in working with Audemars Piguet to create a steel bracelet for the Royal Oak and with Patek Philippe to create the Nautilus bracelet. Nobody was a specialist in creating steel bracelets at that time, so GF was a necessary partner. 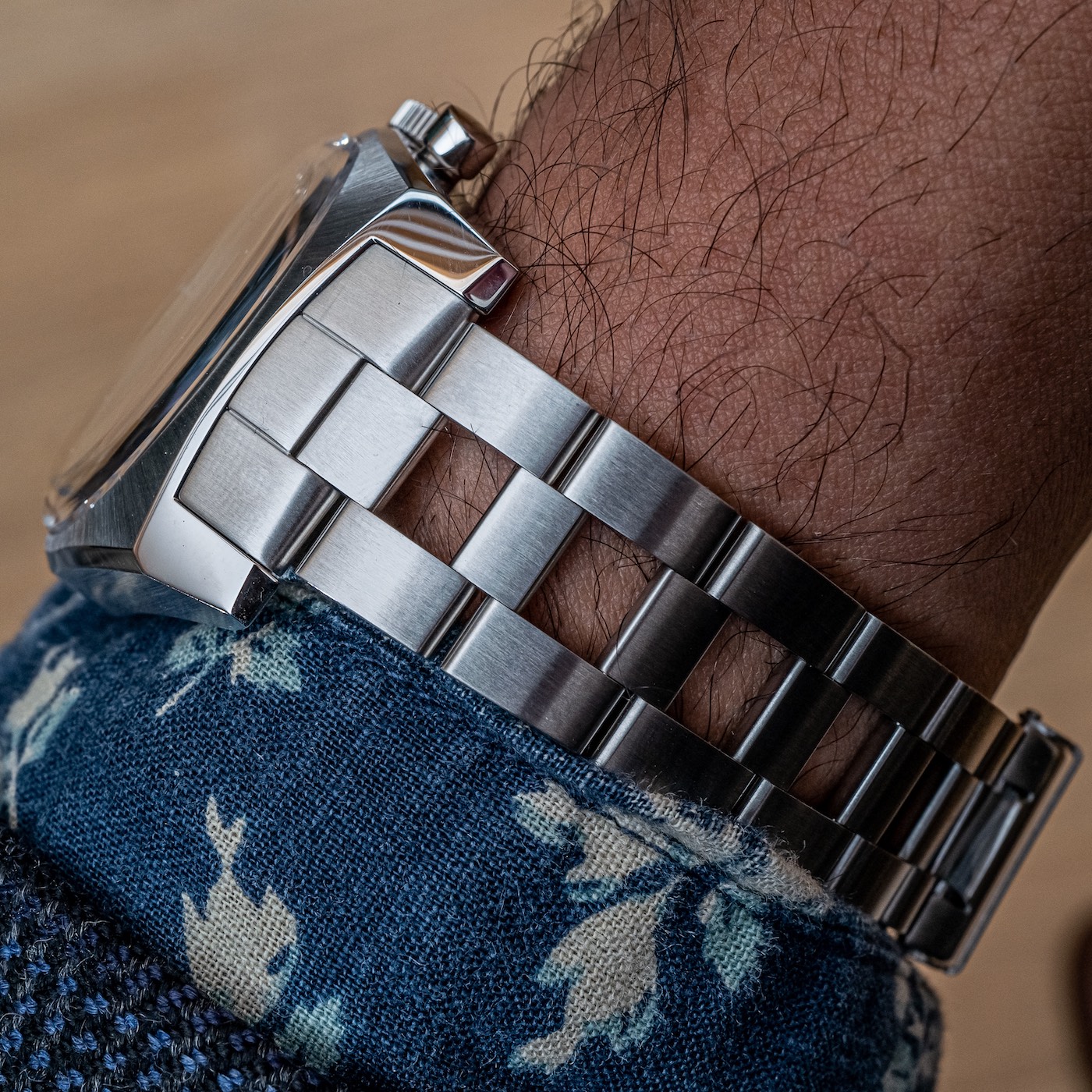 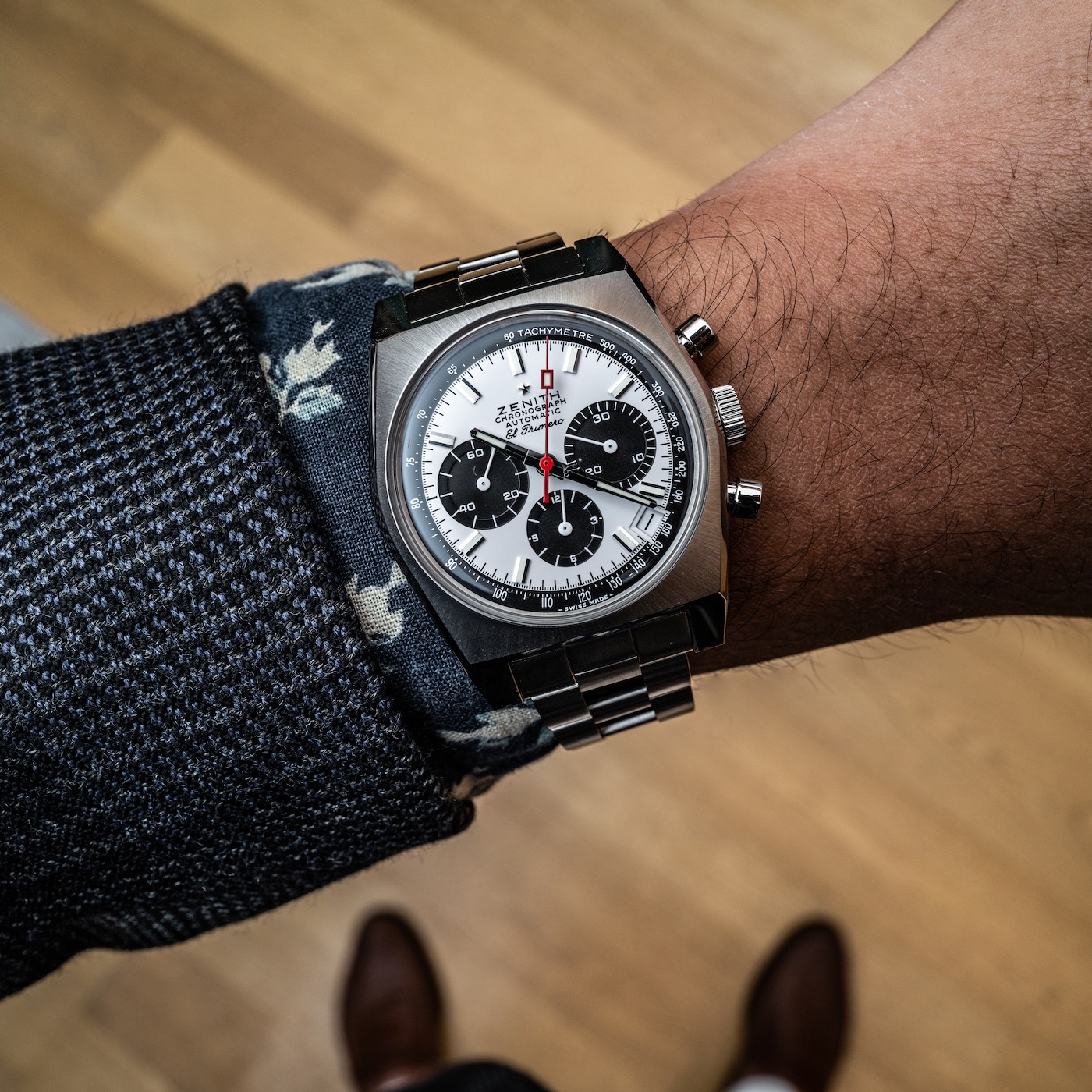 At that same time, Frères did the ladder bracelet for the Zenith El Primero. It was one that really bore no likeness to the aforementioned bracelets due to its open design. The long end links and thin center links with long gaps in between each is a distinctly retro-feeling design and ultimately a design that makes a rather comfortable watch to wear. Ultimately, the ladder bracelet looks as true to the original as possible, and it succeeds because it complements the A384 so well (again). 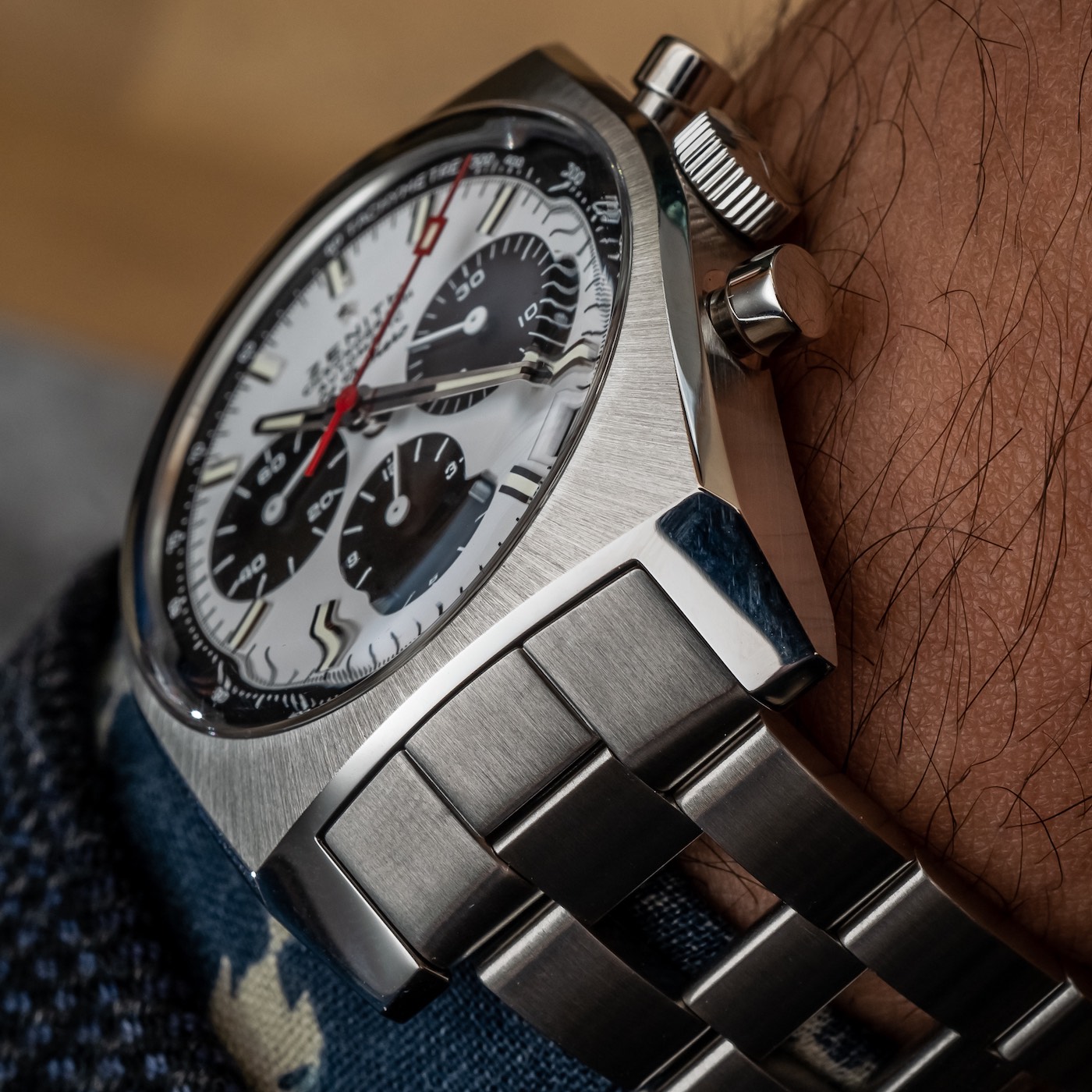 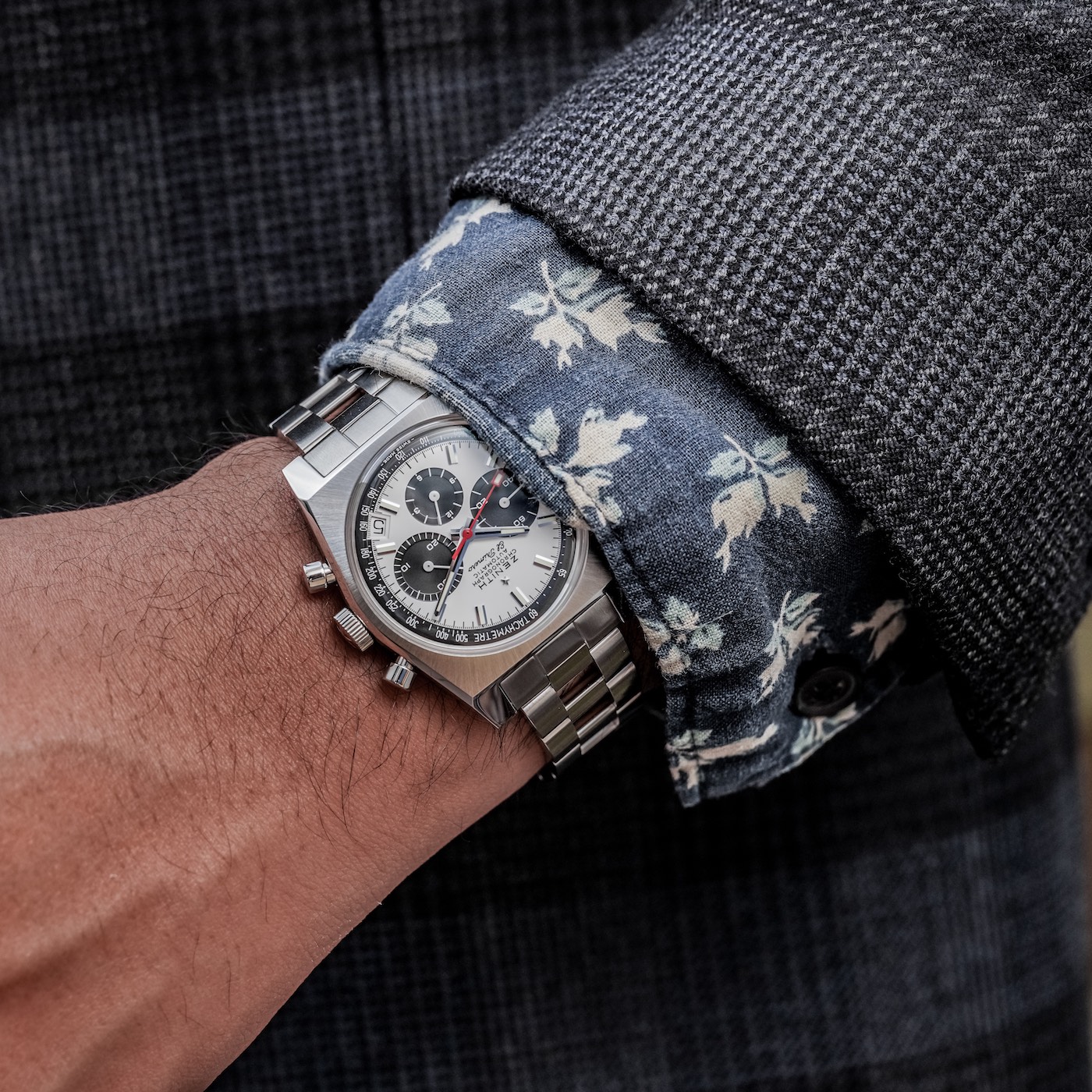 The Zenith El Primero A384 Revival comes on a 37mm-wide and 12.6mm-thick case that strikes pretty ideal proportions. I’ll often subconsciously overlook watches with this case measurement, but the angular and stylized tonneau case looks pretty perfect on my 7.5 inch wrist. Between this and the TAG Heuer Carrera 160th Anniversary that was also released at LVMH Dubai Watch Week, I may be getting more and more curious about <40mm chronographs. I do wish the water resistance was higher than 50M, but there you have it. 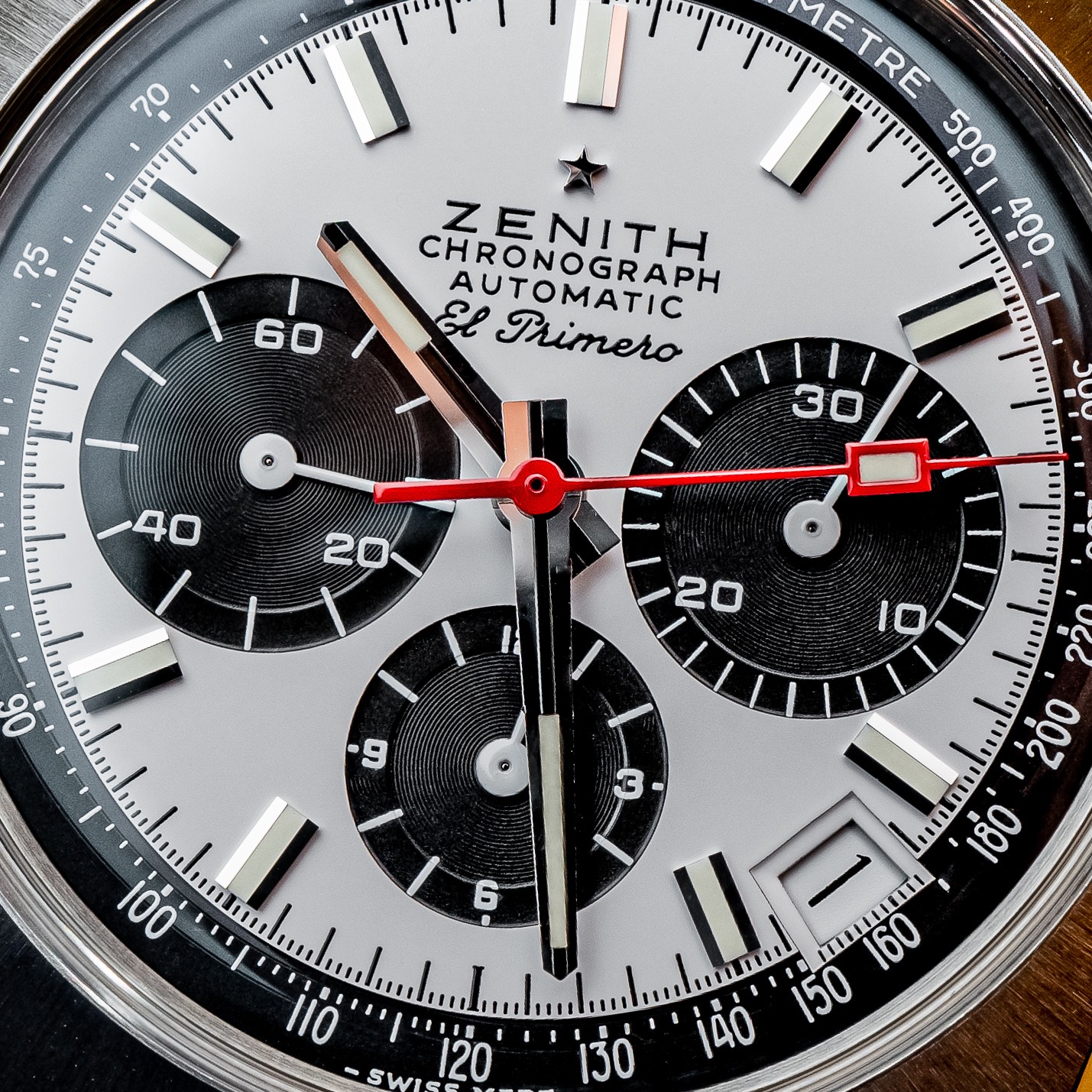 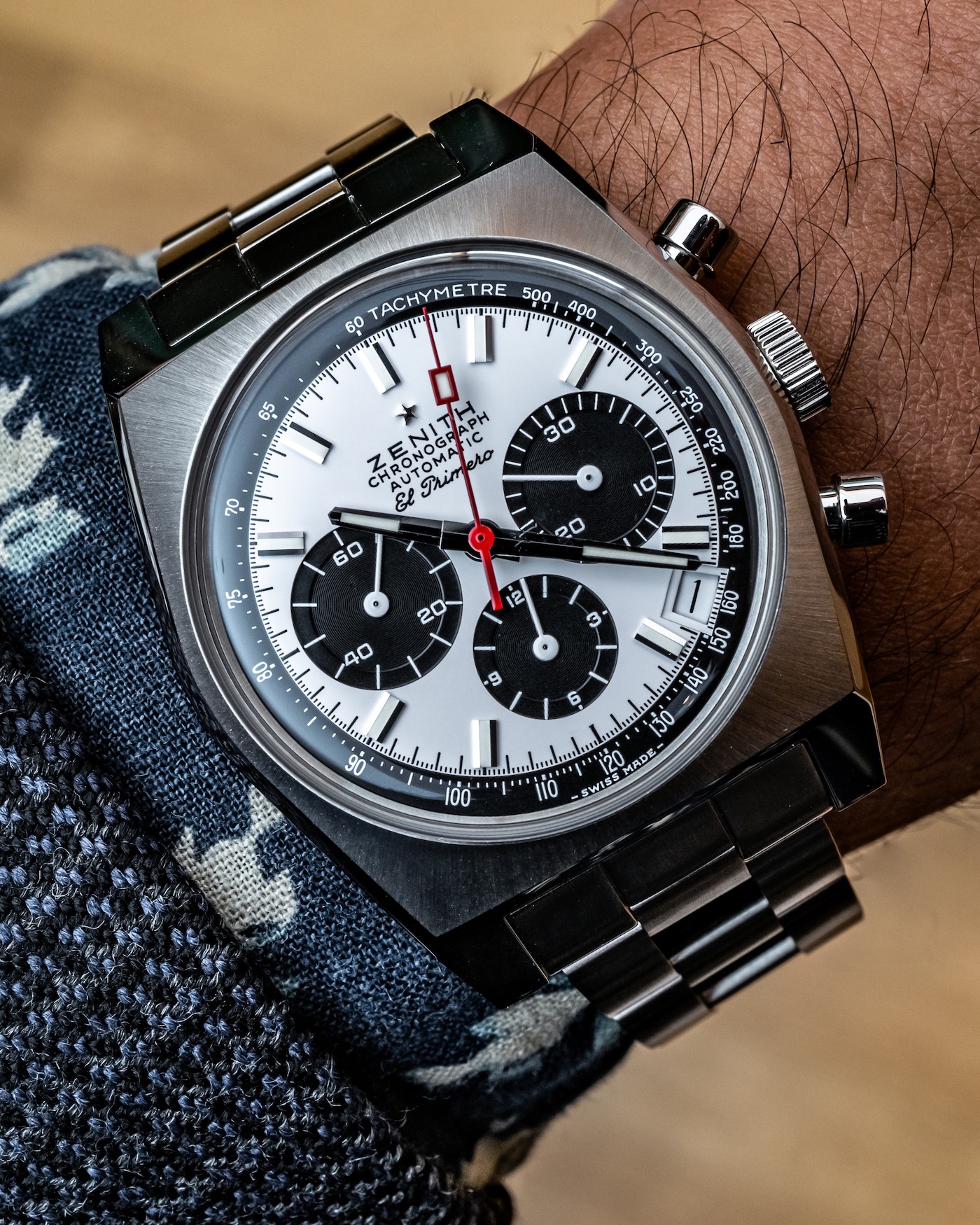 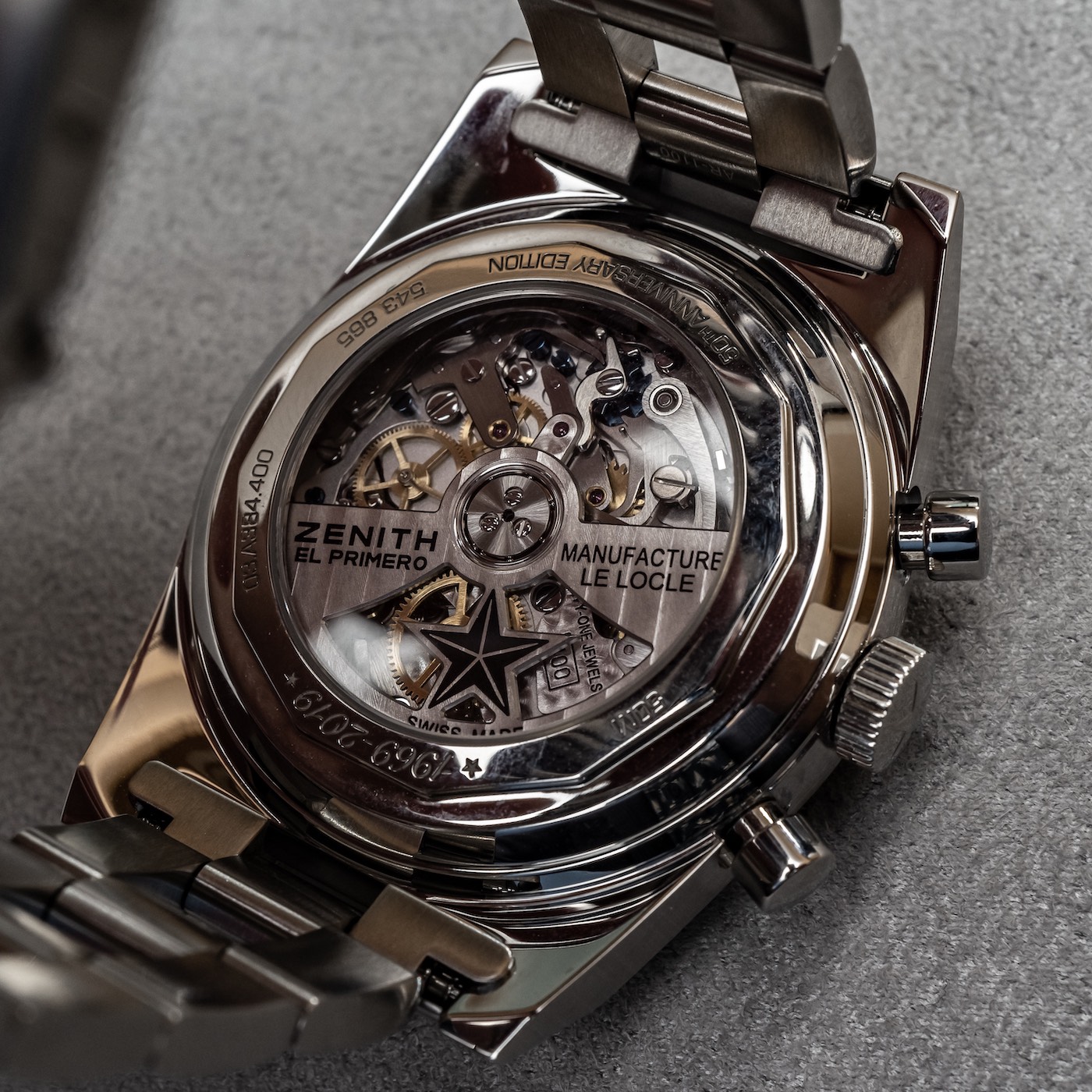 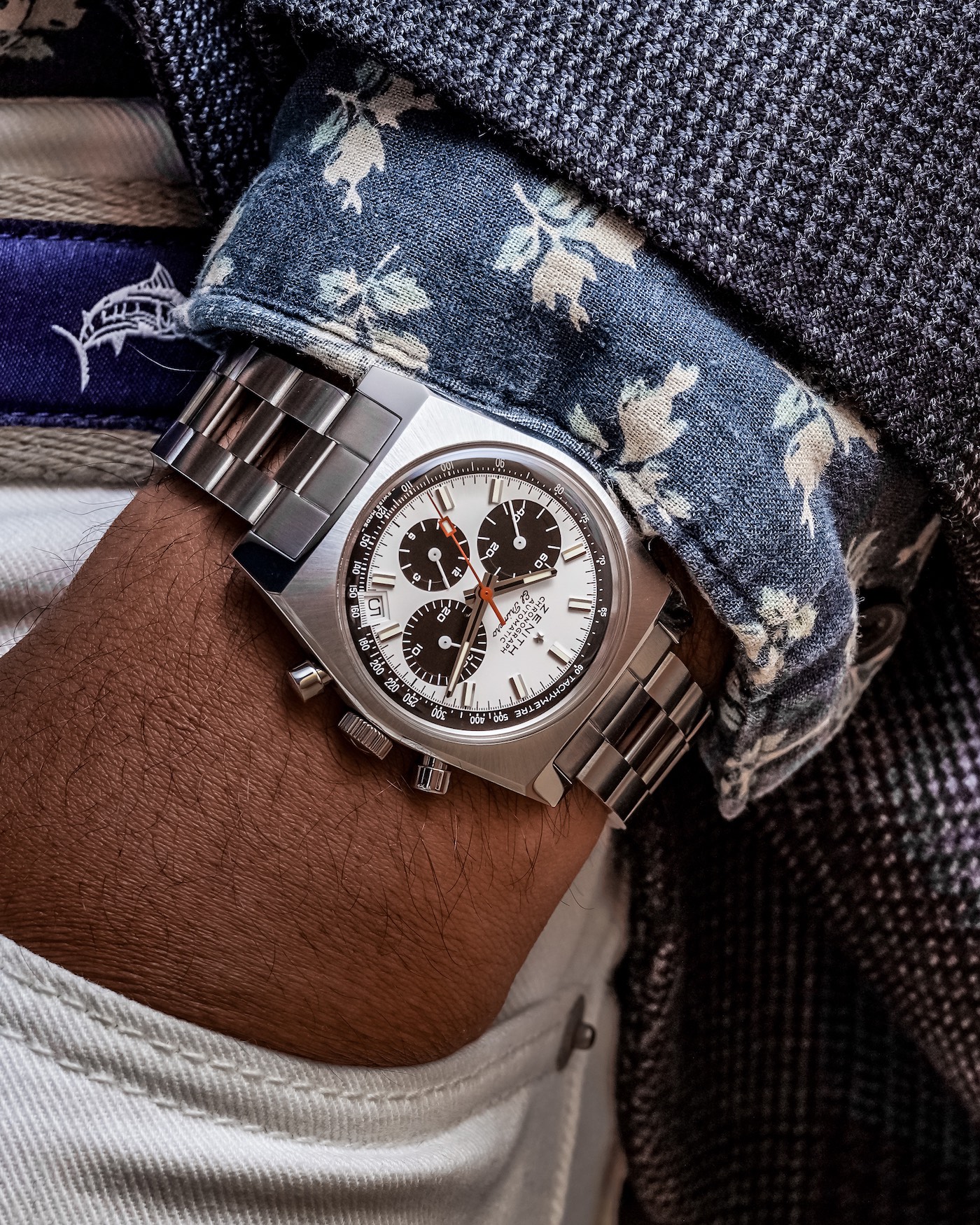 Zenith celebrated the 50th anniversary of the El Primero in grand fashion, releasing a series of re-editions that are a fitting tribute to the first automatic mechanical chronograph. However, this El Primero A384 Revival on “ladder” bracelet (that arrives a year after the anniversary) is one that I’d have near the top of the list of wearable everyday chronographs. It stands out by being true to the original, which is the next best thing. The Zenith El Primero A384 Revival on “ladder” bracelet will be priced at just around $8,600 USD. You can learn more at zenith-watches.com.