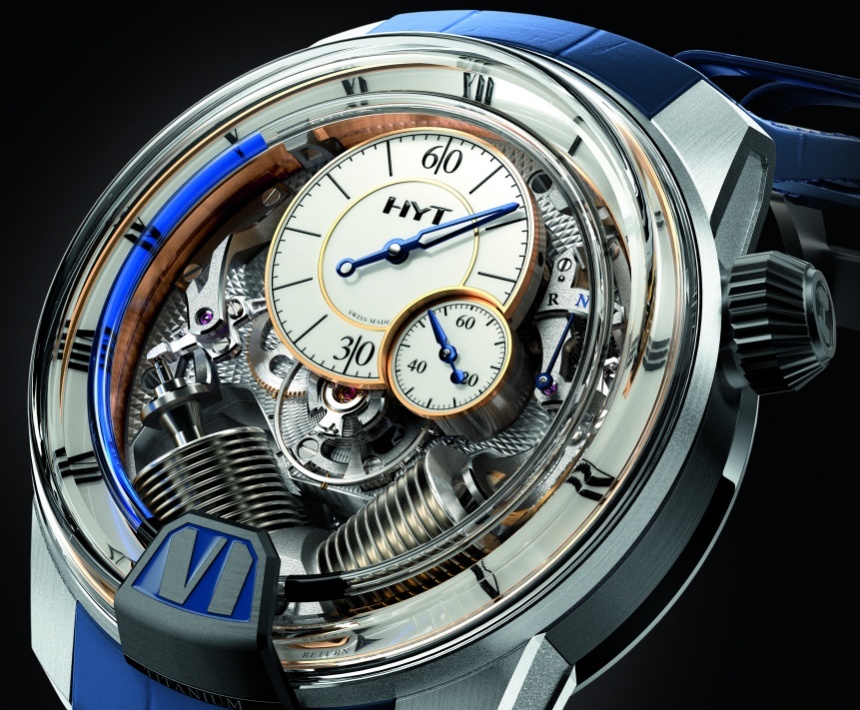 For SIHH 2016, Swiss HYT will be unveiling the newest limited edition version of their H2 collection with the HYT H2 Tradition. Following in the steps of other brands like MB&F, the HYT H2 Tradition takes an inherently modern watch and makes it a bit retro. The ultra contemporary “liquid indicator” H2 gets a bit of a “traditional” makeover with the HYT H2 Tradition watch, using touches like guilloche finishes, lacquered dials, and blued hands – and the result is something that looks pretty interesting, in my opinion.

One of the questions I have is why there is such an interest in taking a modern watch and making it look older? This started a few years back with the “steampunk design movement” (as I call it) which was about using something new to imagine how futuristic might have looked in the past. Perhaps the most iconic of these watches was the Devon Tread 1 Steampunk (review here). For whatever reason these timepieces exist, they are often thrilling exercises in design, and for that reason I think we keep seeing them. What we also see is increased levels of legibility (most of the time) because the more traditional dials are already often much easier to read than some of the more edgy modern ones. HYT first debuted the H2 watch back in 2013 (hands-on here), and since then has released a few style variations of this flagship-level timepiece, including the interesting H2 Aviator just a few months ago in late 2015.

HYT CEO Vincent Perriard is not a fan of producing classic watches – and yet, he did. I would say that underneath the thin veneer of “traditional” styling, the HYT H2 Tradition is still a modern watch with an APRP-produced ultra-complicated manually-wound mechanical movement that uses liquid in a tube (blue-colored, in this instance) to indicate the hours. This is paired with a traditional dial for the minutes and seconds. The hour numerals around the periphery of the bezel are also printed in Roman numerals. Other “traditional” elements include some of the machine-engraving on the movement and the nice mixture of materials that include a case produced mostly from 18k white gold and titanium with some rose gold elements on the dial. At 48.8mm wide, the HYT H2 Tradition isn’t exactly a small watch but the H2 was never meant to be. I would go so far as to say that Perriard is “against” small watches, given that a primary value of wearing an HYT is visual boldness which attracts the attention of others. There is so much to look at on the dial and movement that size is your friend so that you can see it all. The case is also 17.9mm thick, and most of the color accenting is a pleasant blue – including the strap. In going with the traditional theme, the HYT H2 Tradition comes on a blue matte alligator strap but it also appears that a blue rubber strap comes with the watch as well. While the timepiece is clearly a design experiment whose point is to blend themes, I think that consumers will appreciate the attractive result, even though half the reason that many people approach a brand like HYT is to get away from traditional watches. Inside the HYT H2 is an exclusive movement that operates at 3Hz (21,600 bph) and has a nice long power reserve of 192 hours (eight days). It looks like the small “temperature gauge” indicator on the dial has been removed for this HYT H2 Tradition model, but you still get the crown function selector indicator near the 3 o’clock position. I’ve always really loved how the H2 movement looks and think that this new execution in a more “traditional” style is quite interesting (even though it ironically goes against the initial quasi-automotive-inspired look of the original). We will get a chance to check out the HYT H2 Tradition watch soon at SIHH 2016 and will follow-up after that. The reference 248-TW-10-BF-AB HYT H2 Tradition will be a limited edition of 50 pieces and will come with a price of $189,000. hytwatches.com