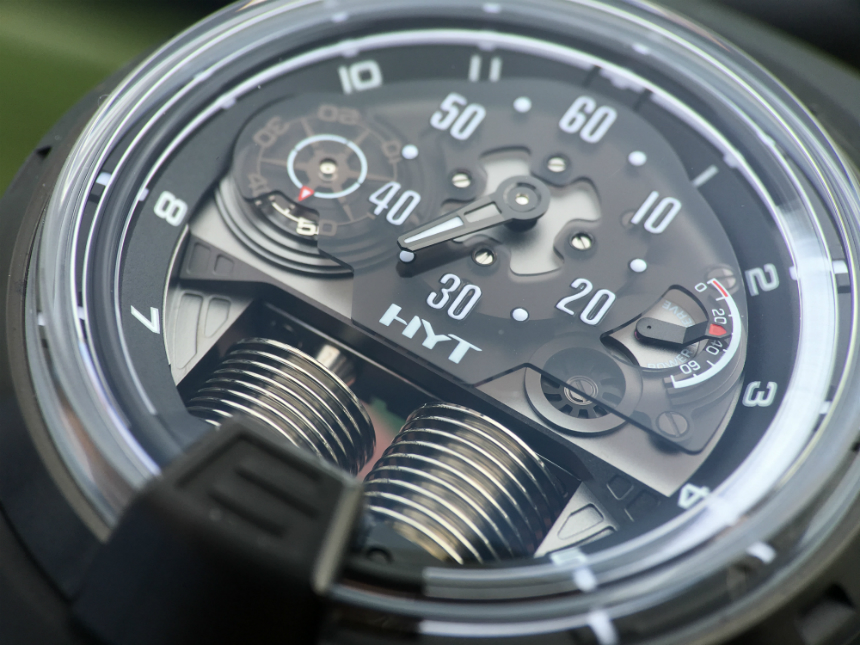 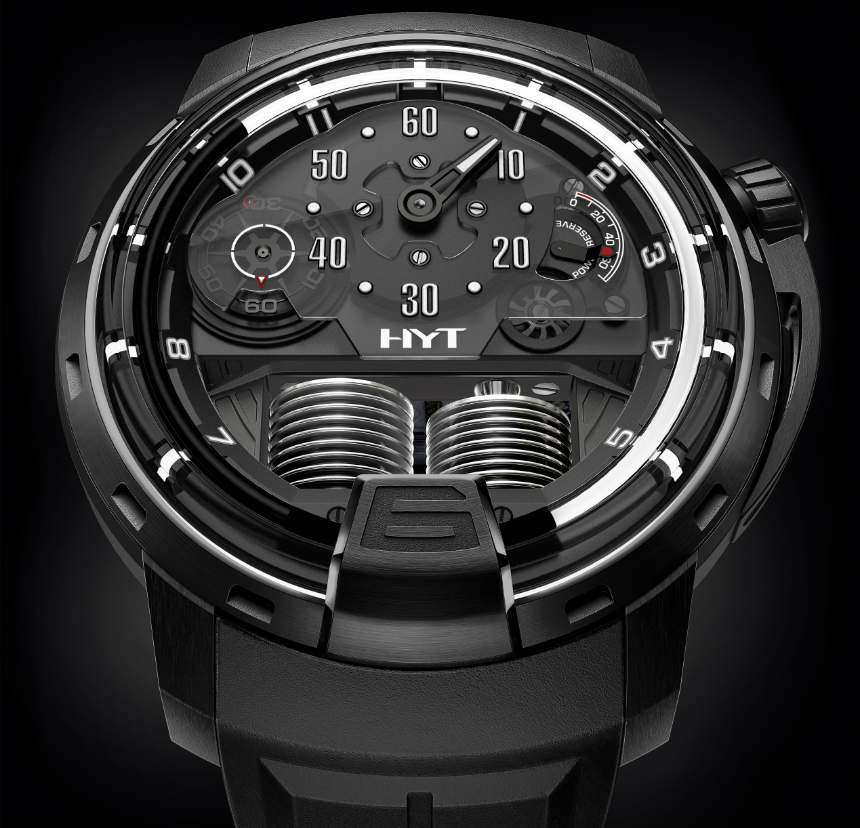 It looks like HYT is dabbling in the dark arts with the all-new HYT H1 Ghost, bringing a wild new fluid-based complication to its collection of equally impressive, über-exotic time machines. Following the Skull Bad Boy watch, the new HYT H1 Ghost has a black DLC titanium case joined by a new black fluid designed to not emit or reflect any light. 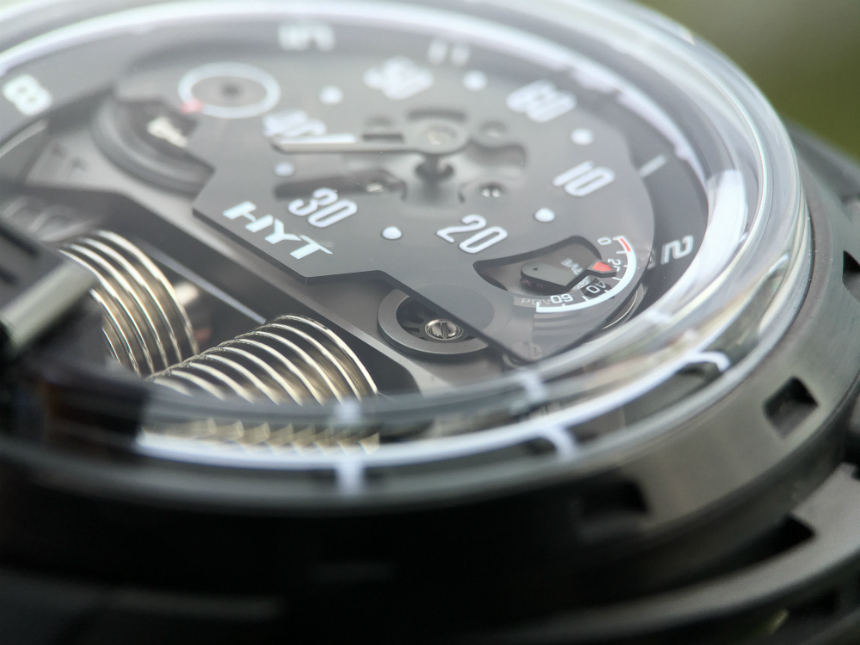 Compared to the brand’s other more visually complex offerings, the stealthy DLC-finished titanium HYT H1 Ghost watch mirrors the original H1 which debuted at Baselworld four years ago with most of the usual components being visually apparent: there’s a central minutes counter, a running seconds disk at 9:30 and a power reserve indicator at 2:30. But its unstructured dial exhibits a very subtle detail that’s easy to miss if you’re not paying attention – and one that lends the watch its supernatural character: it uses a fluid-powered retrograde hour display running a ring around the periphery of the dial – where the bezel would otherwise be. This ring-shaped capillary is filled with an inky black fluid produced exclusively for HYT by its sister company Preciflex, and it is pumped around the dial via a pressurized bellows system. Fun fact about said fluid: it took Preciflex over 12 months to develop the specific chemical formula yielding the unique opacity that ultimately tells the time as the fluid traces its path around the dial. 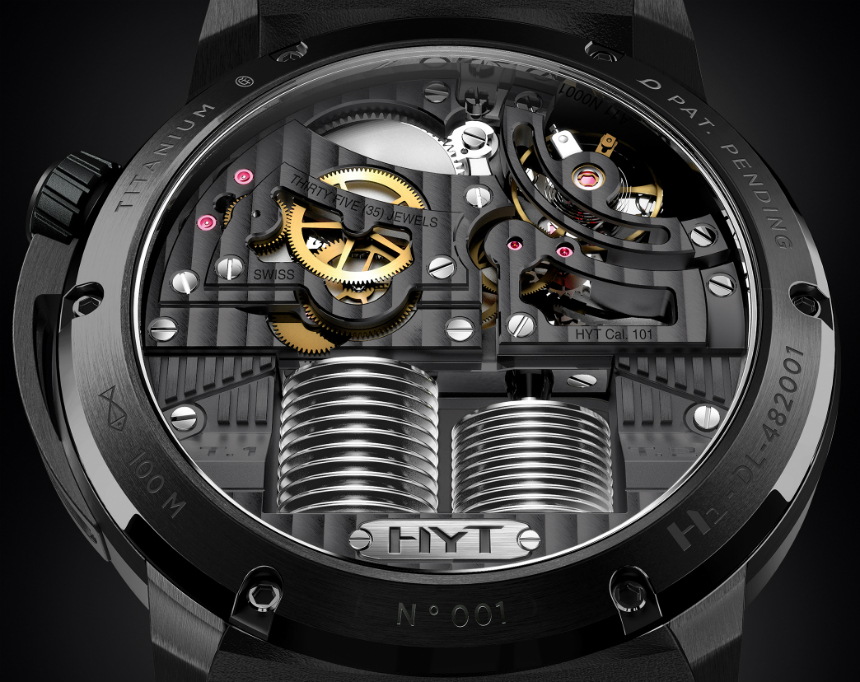 Obviously, ghosts aren’t much for legibility, but HYT has included a neat twist to ensure this apparition isn’t a total Hollow Man. The capillary is illuminated from beneath by Superluminova, which glows back the remaining time up to 6 o’clock – inherently showing the amount of time remaining before either total darkness (6:00pm) or morning (6:00am), at which point the fluid performs its retrograde reset. 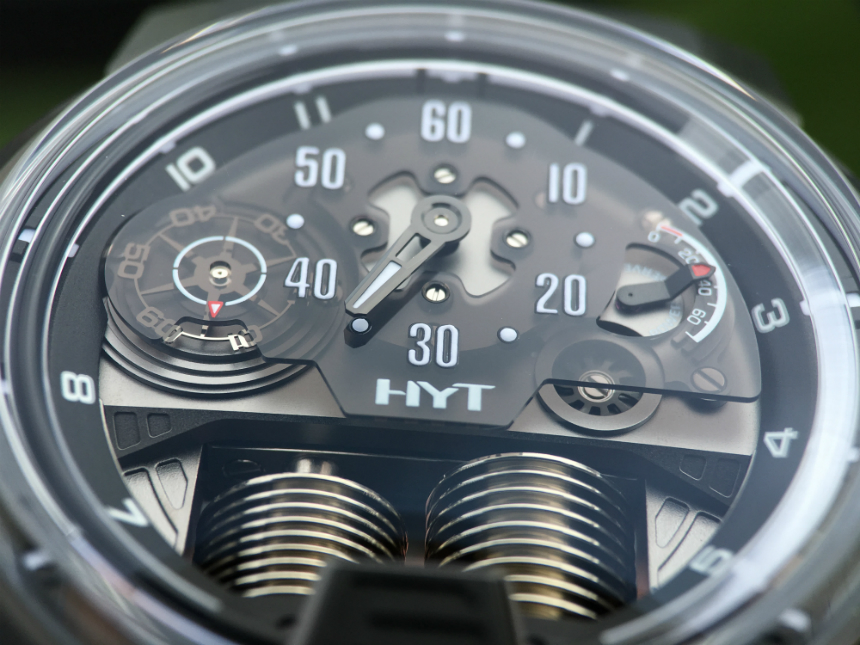 There’s a pretty cool duality between light and darkness at play here – fully intentional on HYT’s part, and a theme that feels considerably more cohesive than the brand’s other concepts. In fact, it’s this theme that could make the hypothetical argument for what Bruce Wayne would wear after making the transformation into the Dark Knight, and while names like Urwerk and many other such wild horological inventions are often kicked around, it’s probably worth arguing that the HYT H1 is about as close as you could get. Only 50 pieces of the HYT H1 Ghost are planned for manufacture, each with an expected retail price of $62,000. hytwatches.com