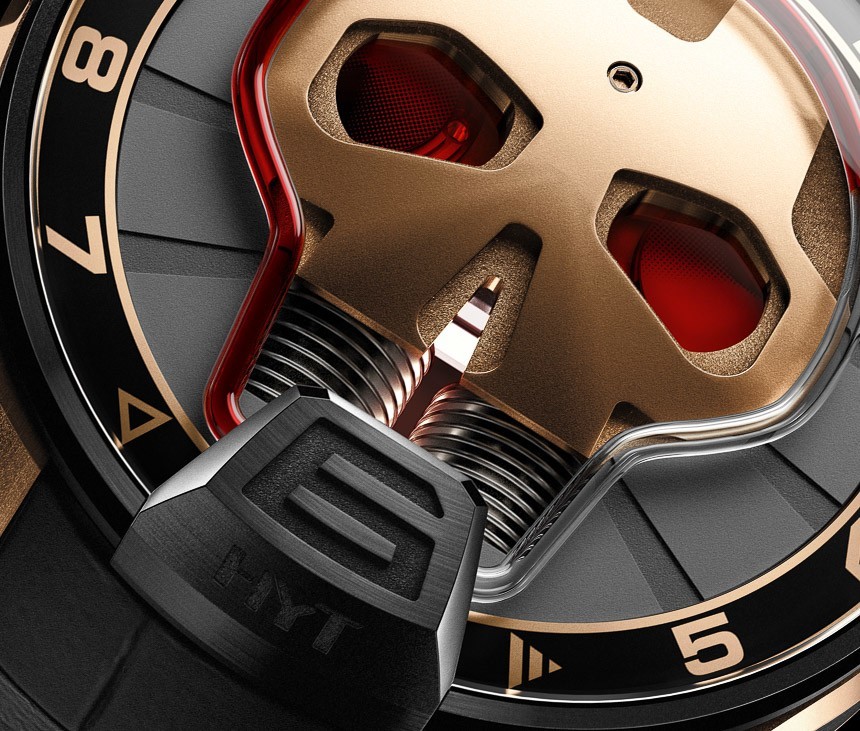 HYT Skull Watch Is Cool, Does Not Indicate Minutes HYT, the “Hydromechanical Horologists” offer a new watch model for 2015 with the HYT Skull – coming in two versions. If you are a bit confused by how to read the brand’s newest watch, then worry not, so was I. What you need to know is that the dial of the HYT Skull indicates the hours, seconds, and has a power reserve indicator. That’s right, the HYT Skull has no need for minutes. What, are you in a rush or something? You’ve got a futuristic skull on your wrist!

Skull watches aren’t anything new, but this is among the first futuristic skull watches we’ve seen. It is interesting, rather limited, and cool, but my question is why HYT decided to create a skull-themed timepiece as their third watch. The HYT Skull is based on the original HYT H1 (hands-on here), which was later followed up with the even more high-end HYT H2 (hands-on here). Following the liquid indicator theme, 2015 for HYT is all about the Skull.

I’ll have to speak with HYT CEO Vincent Perriard on what it is about skulls that make them so popular for luxury watches. Skull-themed tourbillons are becoming popular from brands such as Richard Mille and Hublot (among others). Now, HYT has entered the skull watch game with something that adds a bit extra technical pizazz to the normally morbid theme. The first step was to create a skull outline using HYT’s exclusive liquid hour indication “capillary” system. Rather than fully round, the liquid tube frames the skull on the dial and is the primary way you read the time. According to HYT, the delicate bending of the thin glass tube was a particular engineering challenge.

At launch, the HYT Skull will be offered in two versions, one will be in DLC black titanium with green liquid, and the other will be in 18k rose gold with DLC black titanium and will feature red colored liquid. They are individually known as the HYT Skull Green Eye and HYT Skull Red Eye – and come in a new HYT case size of 51mm wide and 17.9mm thick. I can’t wait to see what this massive Skull watch looks like on the wrist. From a design perspective, there is so much you can say HYT is pulling from – the HYT Skull makes me think of a whole universe of comic book, cartoon, and movie skulls and characters. I’ve just selected He-Man’s Skeletor, the T-1000 Terminator, and of course The Punisher’s skull logo. Those who decide to get an HYT Skull watch will of course make their own associations with the skulls which the HYT Skull watch dial reminds them of. In my opinion, HYT wanted to make a futuristic skull-style watch that one could associate with the look of Marvel’s Iron Man; that means the skull is less about skeletons and more about the “bad-assery” of skulls, masks, and armor.

While the HYT Skull very much fits within the design theme of the brand, like I said, the case is new, and I am happy about that since I don’t like it when brands re-use existing cases and refer to a timepiece as being totally fresh. The watch crown is still located at 2:30 on the case, but the crown protector has been removed. The crown is of course rubber-coated. The dial of the HYT Skull is interesting and remarkably legible given the theme. How is that, given that it does not indicate the minutes? Think of the HYT Skull watch as HYT’s answer to the single-hand watch. While you can’t really know the minutes with any precision, you can use the position of the liquid as it travels between hours to know the time within the closest 10 minutes or so. This is not as precise as many other single-hand watches, but I don’t think people are going to be wearing the Skull watch because they need to know the precise time – they will use their phone for that.

The eyes of the skull on the dial are also indicators. The left eye indicates the running seconds, while the right eye is a power reserve indicator for the manually wound mechanical movement. How these features work exactly, or how legible they are is something that I will have to comment on later when I get some hands-on time soon with the HYT Skull watch. Inside the HYT Skull watches are exclusive HYT movements. You have an integration of their proprietary bellows and capillary system to move the liquid, which can be seen under the skull’s “teeth.” The rear of the case is viewable through a sapphire crystal window, offering a nice look into the movement. The movement operates at 4Hz (28,800 bph), with a power reserve of about 65 hours. I like the traditional mentality behind designing it along with the modern aesthetics. Of course, the matching green or red tinted sapphire crystal is a nice touch which adds to the overall presentation of the HYT Skull watch.