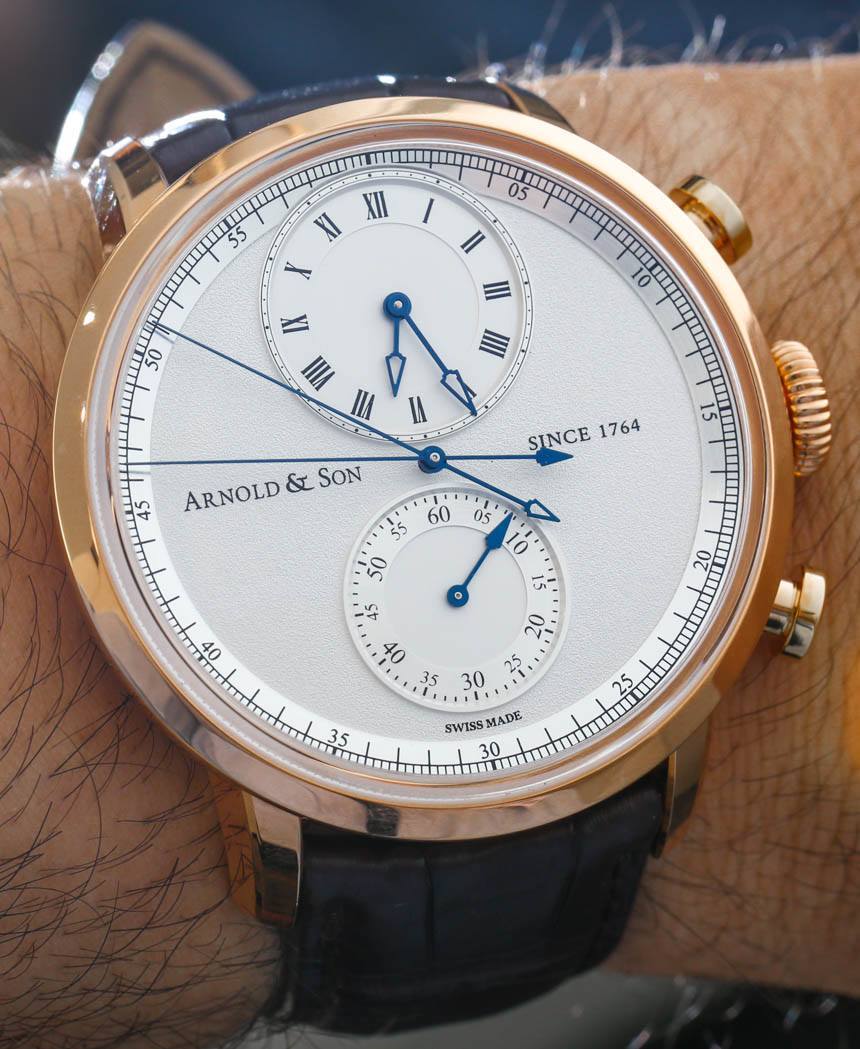 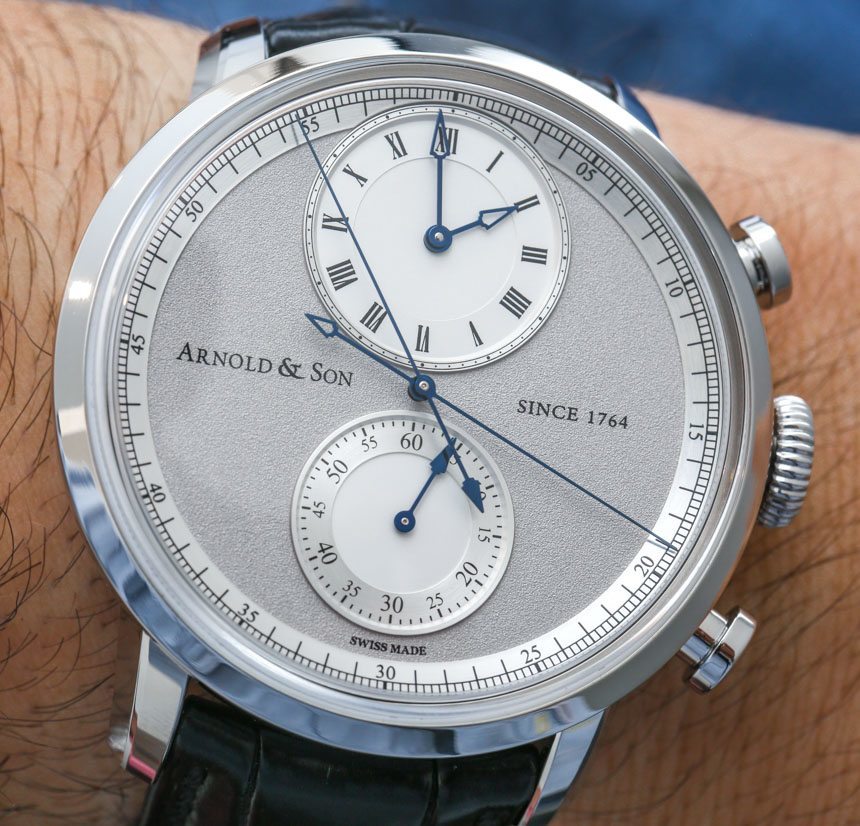 The Arnold & Son CTB Chronograph is one of those watches that will be difficult to understand without seeing it in operation. In fact, it isn’t even clear that the watch is a chronograph when seen in pictures, nor is it clear how everything works. For this reason, I am happy that we are able to offer a hands-on video of the Arnold & Son CTB Chronograph in action. What you first need to understand, is that there are dual central hands, and one indicates the seconds for the time, and one records the seconds for the chronograph. 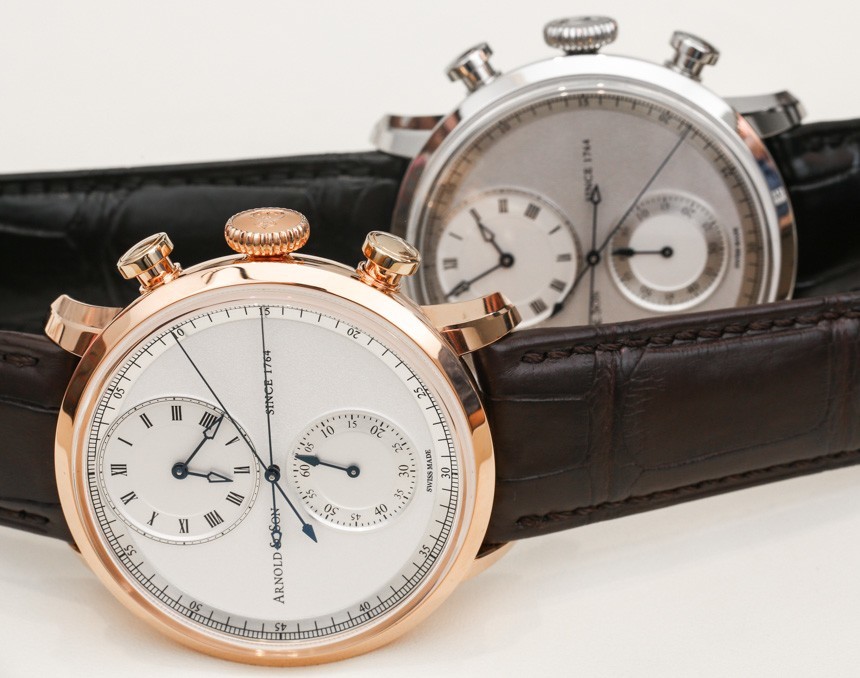 The hand that indicates the seconds for the time “ticks” (even though the watch is purely mechanical) because it is a dead beat (“True Beat,” as Arnold & Son likes to call it) seconds hand. This is carried over from traditional regulator clocks which were highly precise instruments used for regulating other clocks. The central chronograph hand sweeps normally as to most other chronograph hands in 4Hz movements. Having them work together is interesting, because one hand ticks and one sweeps. The combination is unique, to say the least.

Under the 12 o’clock indicator on the dial is an eccentric dial for reading the current time. While the dial is small, it is very legible and attractive. We very much appreciate this design that Arnold & Son continues in many of its pieces. Note that the time uses Roman numeral markers while the chronograph elements on the dial use Arabic numeral markers. Over 6 o’clock on the dial is a 60-minute counter for the chronograph, and while the markers are small, it is still legible. The blued steel hands work well on the high-contrast non reflective dial textures and colors. 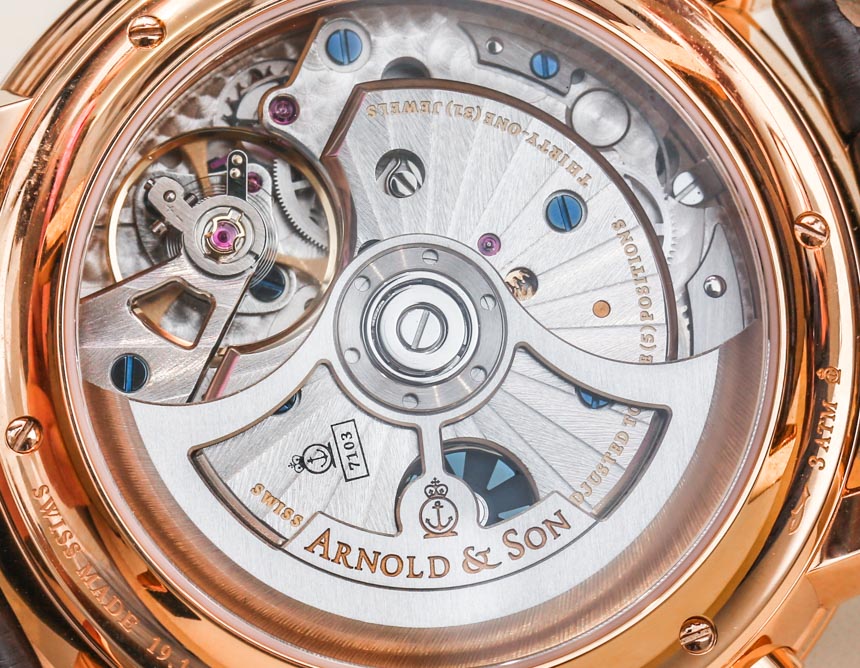 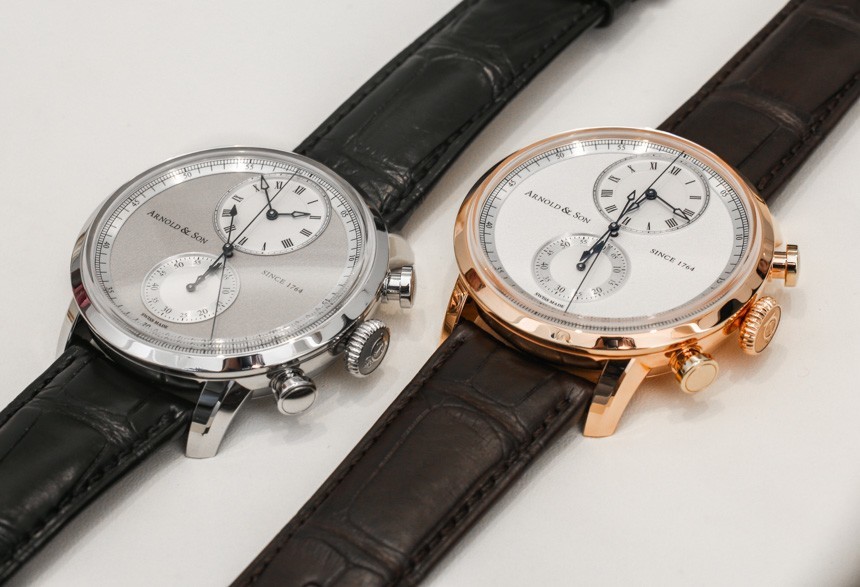 You’ll notice that the steel and gold models of the Arnold & Son CTB Chronograph have slightly different dial colors. The dial is more white (“silvery-white and silvery-opaline”) in the 18k rose gold version, while it is a bit more gray on the steel version. Speaking of which, we really like that Arnold & Son decided to offer a steel version of this interesting watch right off the bat. They have continuously been one of those progressive-minded high-end brands that has been offering steel versions of many of their high-end timepieces in addition to the gold models. This is part of a larger trend of collectors who are eager to get watches with cool movements and designs but don’t want to spend the types of premiums many brands demand for precious metals. We at aBlogtoWatch certainly echo that sentiment in asking brands to make sure more watches come in steel or titanium versions in addition to precious metal cases. Oh, and please don’t try to simply charge precious metal prices for non-precious things (though, sadly, that happens way too much).

Arnold & Son does offer their share of smaller watches, but their sweet-spot is about 44mm, the size of the Arnold & Son CTB Chronograph. The brand realizes that these are designs meant to be shown off, and I think they personally like the larger sizes on their own wrists. Though, if you want 40mm-wide watches, you can get them from the brand. Otherwise, the cases are pretty classic in proportions and handsome on the wrist. 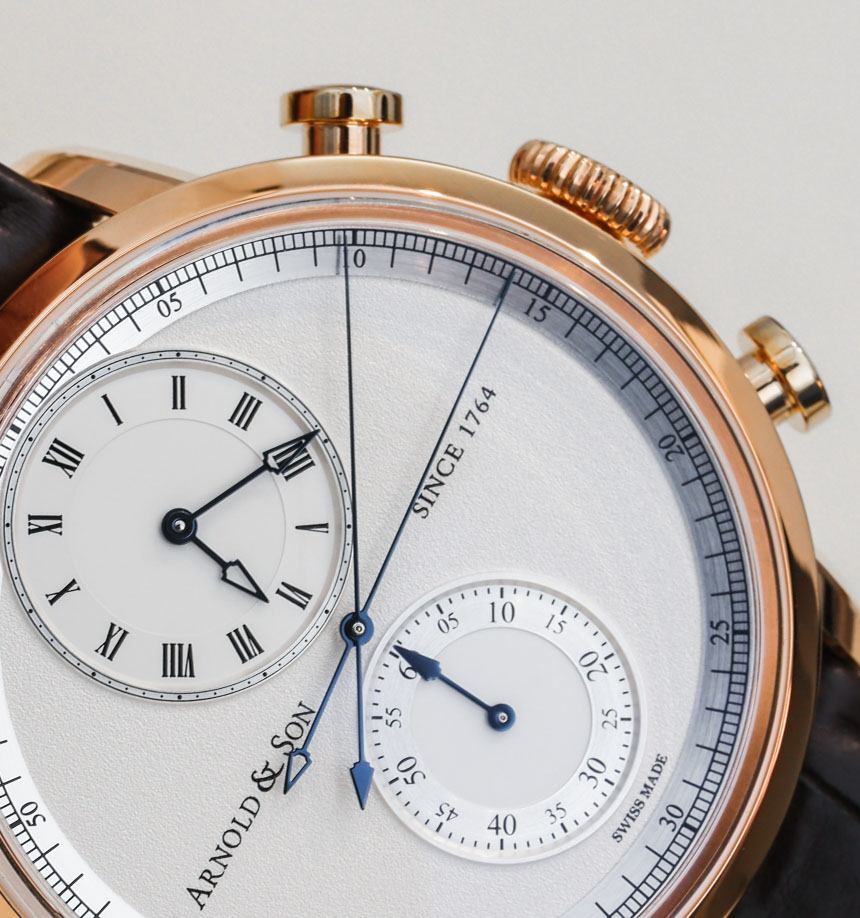 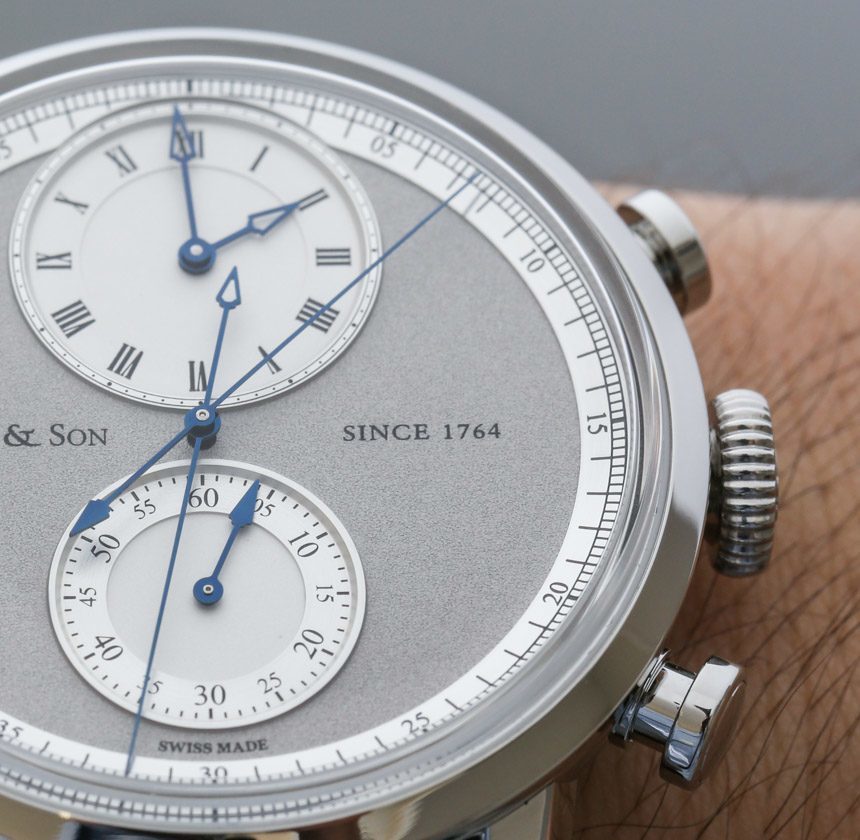 Even though Arnold & Son likes to used domed sapphire crystals over the dial, you can see that there isn’t a ton of reflection, because they use a healthy amount of AR coating. This is especially important in classic-looking timepieces because too much glare on the dials tends to result in an ugly, cheap look for otherwise great-looking watches. I’ve said this before and I’ll say it again, the ideal viewing experience through the dial of a high-end watch is a sapphire crystal that you can’t even see. You should feel as though you can put your finger right on the dial.

The Arnold & Son CTB Chronograph is a real watch nerd’s watch, to the degree that explaining the functions to anyone other than to watch people, will result in a very short conversation. “Dude, want to check out my new watch? It has an automatic movement, a dead beat seconds hand, AND a chronograph all for under $30,000!” It’s funny, because as a seasoned watch guy, I get all excited about stuff like this but I must temper my feelings with the knowledge that most of the rest of the world believes me to have my priorities all mixed-up. It’s okay, we all have our little fantasy worlds where we experience perfection that we find lacking in the real world. 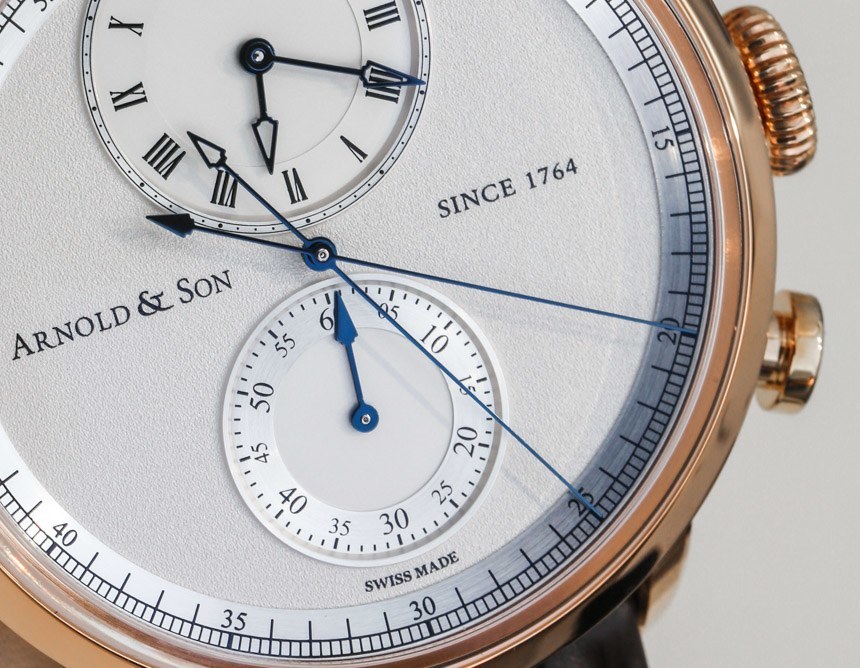 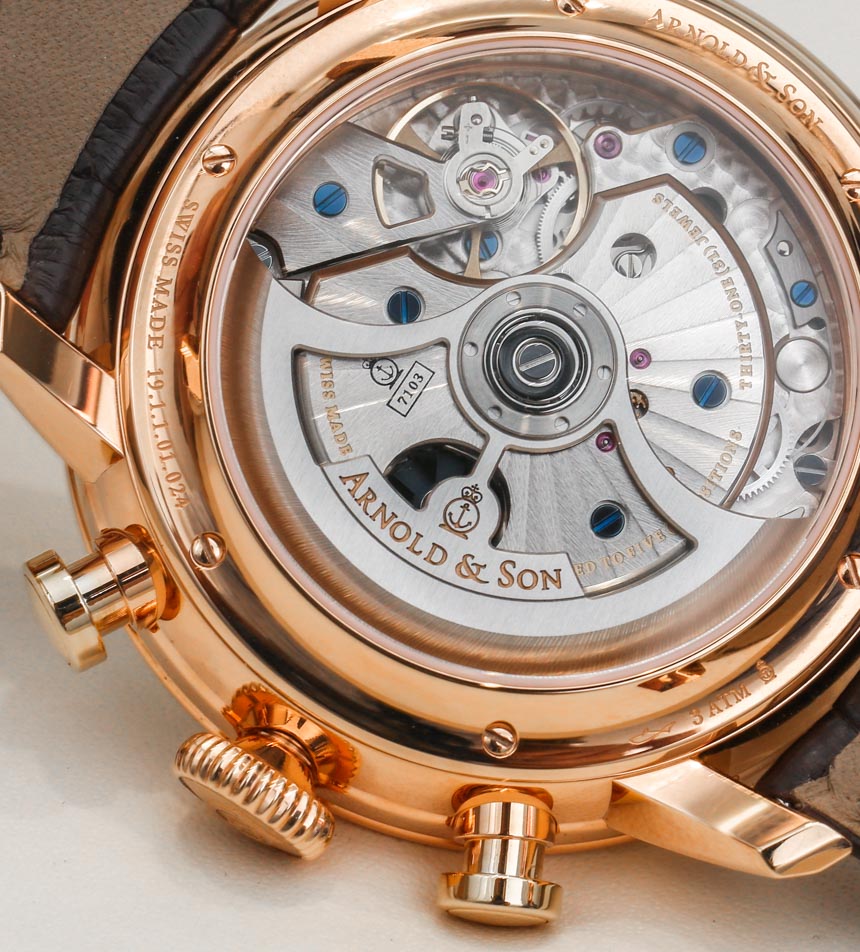 Inside the Arnold & Son CTB Chronograph is the in-house made caliber A&S7103 automatic movement. The automatic rotor spins on ceramic ball bearings and it has a power reserve of about 50 hours, operating at 4Hz (28,800). The movement is further slightly dark gray in its finishing, which is attractive. Arnold & Son still lacks some of the extremely fine hand-finished look of some of its competitors, instead offering movements that are a bit more machine-decorated in look. But there is still a lot of hand finishing and, of course, assembly.

The chronograph part of the 7103 movement uses a column-wheel and features a nice responsive action with the pushers for starting and stopping the chronograph complication. I do appreciate Arnold & Son sticking with a symmetrical layout on the dial, but think in the future, they could up the ante a bit more but putting two hands in the chronograph dial and allowing it to measure both minutes and hours – that seems like an appropriate Arnold & Son type of complication to offer and would give the dial a total of six hands, which would be fun. 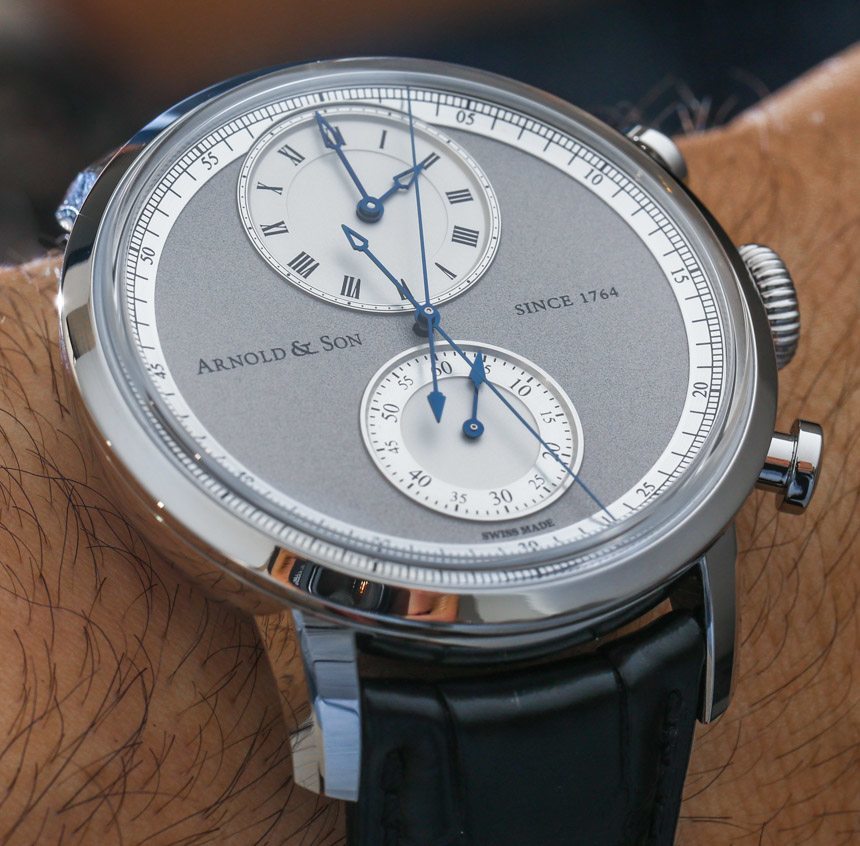 While the Arnold & Son CTB Chronograph is not part of a limited edition, I am pretty sure that it will remain a niche product in the Arnold & Son line-up. Even though it is cool, it does combine both a sober dial with a high price. At this level, there are many options out there. If you just want a chronograph, you can spend less, and if you just watch with a dead beat seconds hand, you can spend less. Of course, there aren’t any other options out there if you want both, so for those people, Arnold & Son is here to serve you.

One thing the Arnold & Son Central True Beat Chronograph does have going for it, is visual appeal when using it. The dial is very animated, especially when the chronograph is activated. That means the Arnold & Son CTB Chronograph is the type of watch you can easily fall in love with when it is on your wrist – but of course, you’d need to find one to check out in person. With all that said, you know I love niche watches because I think everyone should have at least a few timepieces uniquely suited to them in addition to watches with a lot of mainstream appeal. Though such exclusivity usually comes with a price premium. The Arnold & Son CTB Chronograph ref. 1CHAS.S02A.C121S in steel is priced at $27,750 USD and the ref. 1CHAR.S01A.C120A in 18k red gold is priced at $44,350 USD. arnoldandson.com