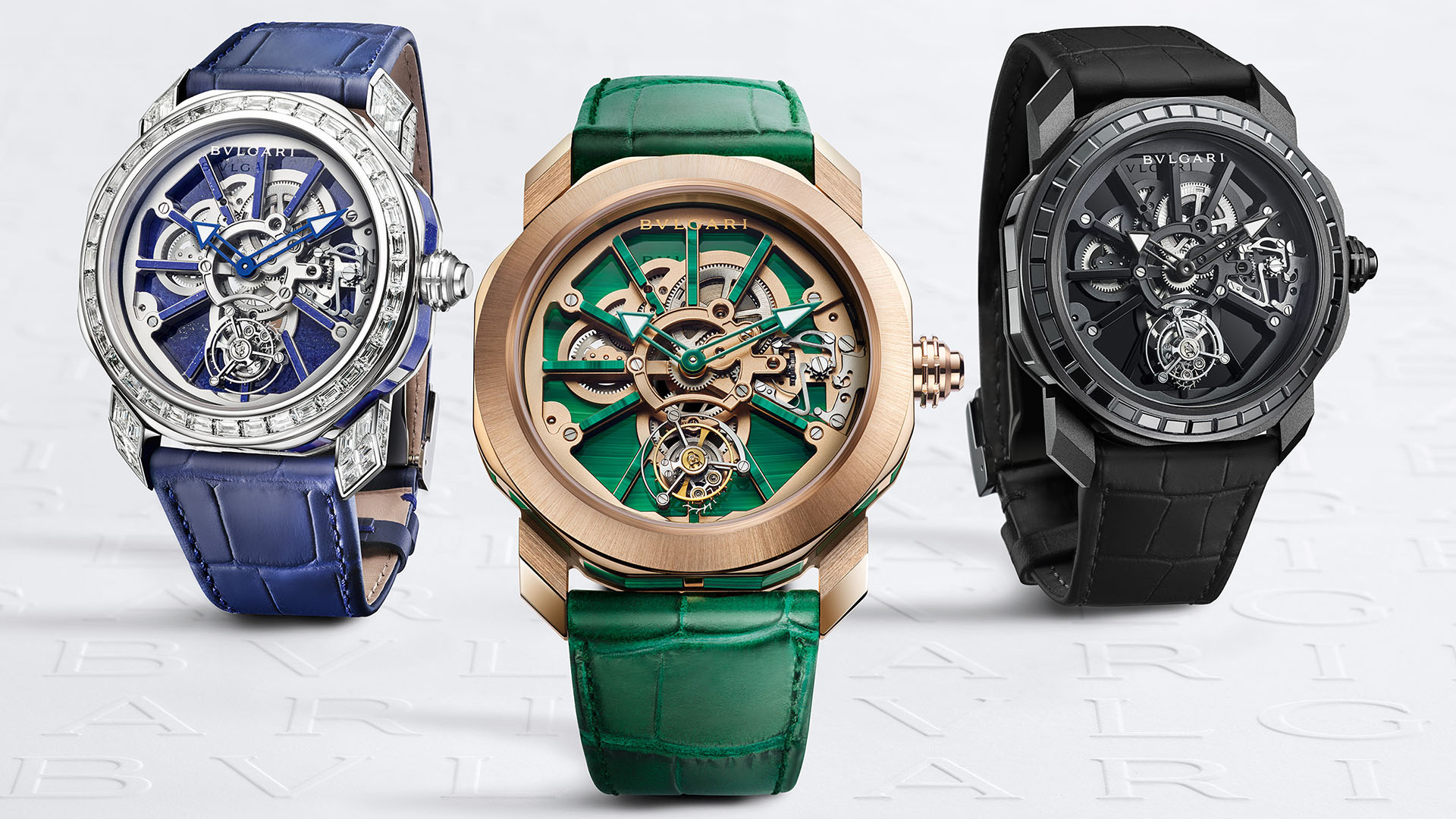 In less than a decade of production, the complex geometric Bulgari Octo series has firmly established itself as a modern icon of watchmaking. The Italian brand has interpreted this form in a myriad of materials, complications, and variants from the record breaking ultra-thin Octo Finissimo series to the softer, more rounded forms of the Octo Roma, and for 2021 Bulgari gives its customers the opportunity to reimagine the design for themselves. With cases and movements partly made from semi-precious stones, these new models work in concert with the brand’s new Maestria configuration app at Bulgari boutiques to deliver 30 possible variations of case materials, gem settings, case stones, and custom engravings. The new Bulgari Octo Roma Naturalia series both offers a theatrically luxe take on the streamlined Octo Roma line, and pioneers an intriguing new concept in mainstream luxury watch sales. 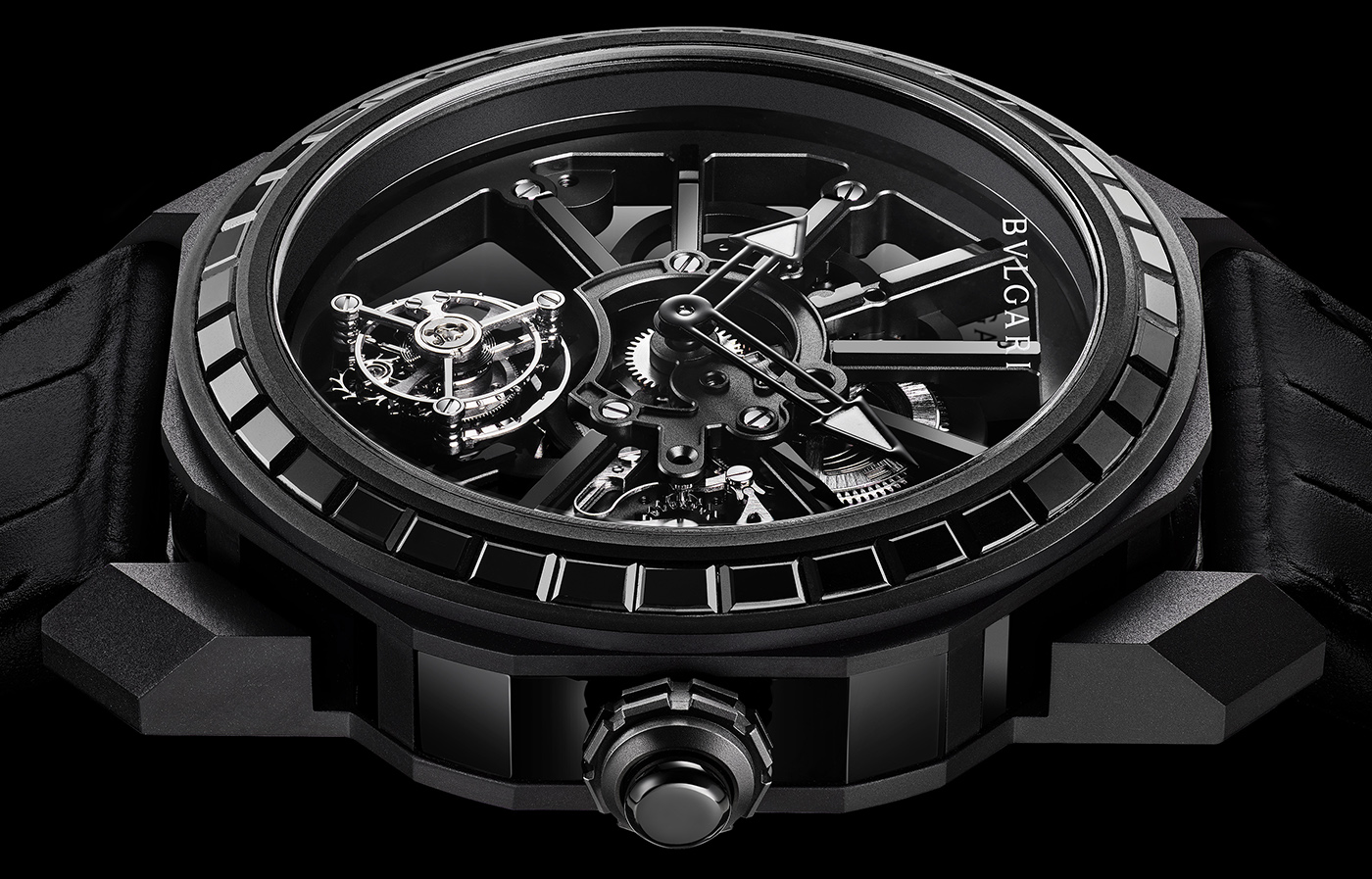 It isn’t often that a flying tourbillon-equipped watch has its tourbillon upstaged by another element of its design, but the 44mm cases of the Bulgari Octo Roma Naturalia series fit the bill here. The Octo Roma Naturalia series follows the same refined geometric form as the standard Octo Roma, but adds further complexity to this multifaceted design with a dual material sandwich-style construction. While the bezel, caseback, and lug assembly are constructed from either matte black PVD titanium, brushed and polished rose gold, or a platinum-gold alloy, the central caseband is rendered in dramatic contrasting stone. Available in polished black onyx, striated green malachite, and gold-flecked blue lapis lazuli, Bulgari spends two months preparing and finishing the stone elements of each watch. To ensure the stone caseband exactly matches the stone parts of the dial and movement, each stone segment of the watch is hewn from the same single block. For added shock and awe value, customers can also option the bezel, case, and lugs with baguette cut onyx or diamonds. 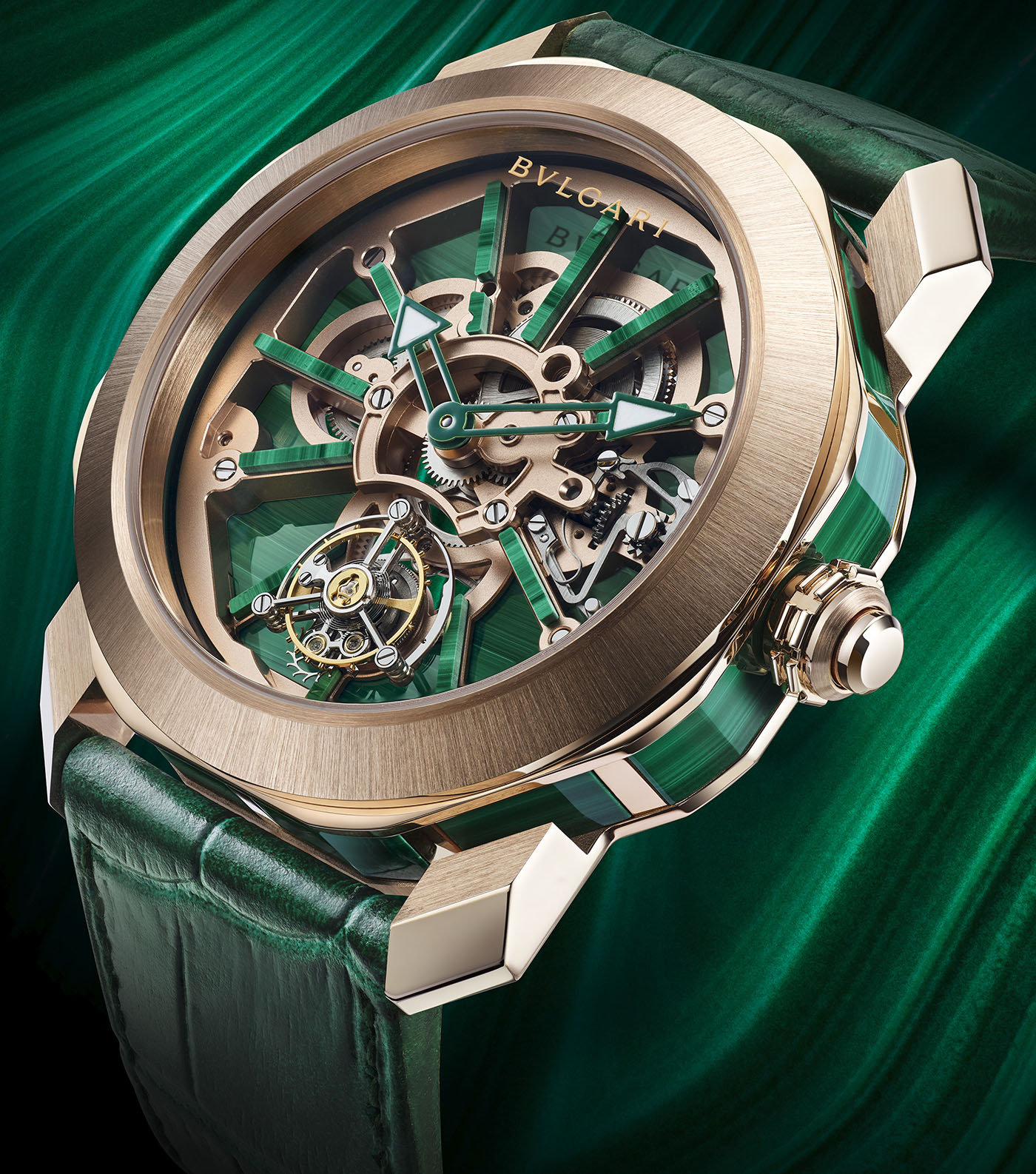 Like the cases, the skeleton dials of the Bulgari Octo Roma Naturalia line rework familiar Octo elements to maximize the impact of the line’s signature stone elements. A web of skeleton bridges form raised platforms for the extended applied baton indices, an Octo series hallmark here rendered in either lapis lazuli, malachite, or onyx. The bridges themselves share the same material as the metal case elements, and offer individual round skeleton windows for nearly every element of the gear train. While this offers an intricate view of the inner workings of the movement, the Octo Roma Naturalia is surprisingly legible for a skeleton design thanks to the stone veneer that covers the movement plates and fills the design’s negative space with a single color. Even with all this visual complexity, the 6 o’clock flying tourbillon remains a natural focal point, adding to the sense of visual depth in the design by appearing to float well above the base level of the movement plate. Conversely, the Octo Roma Naturalia’s skeleton arrow handset feels slightly out of place in initial images, with a simple design and a painted finish that clashes somewhat with the complexity and polished stone that surrounds it. 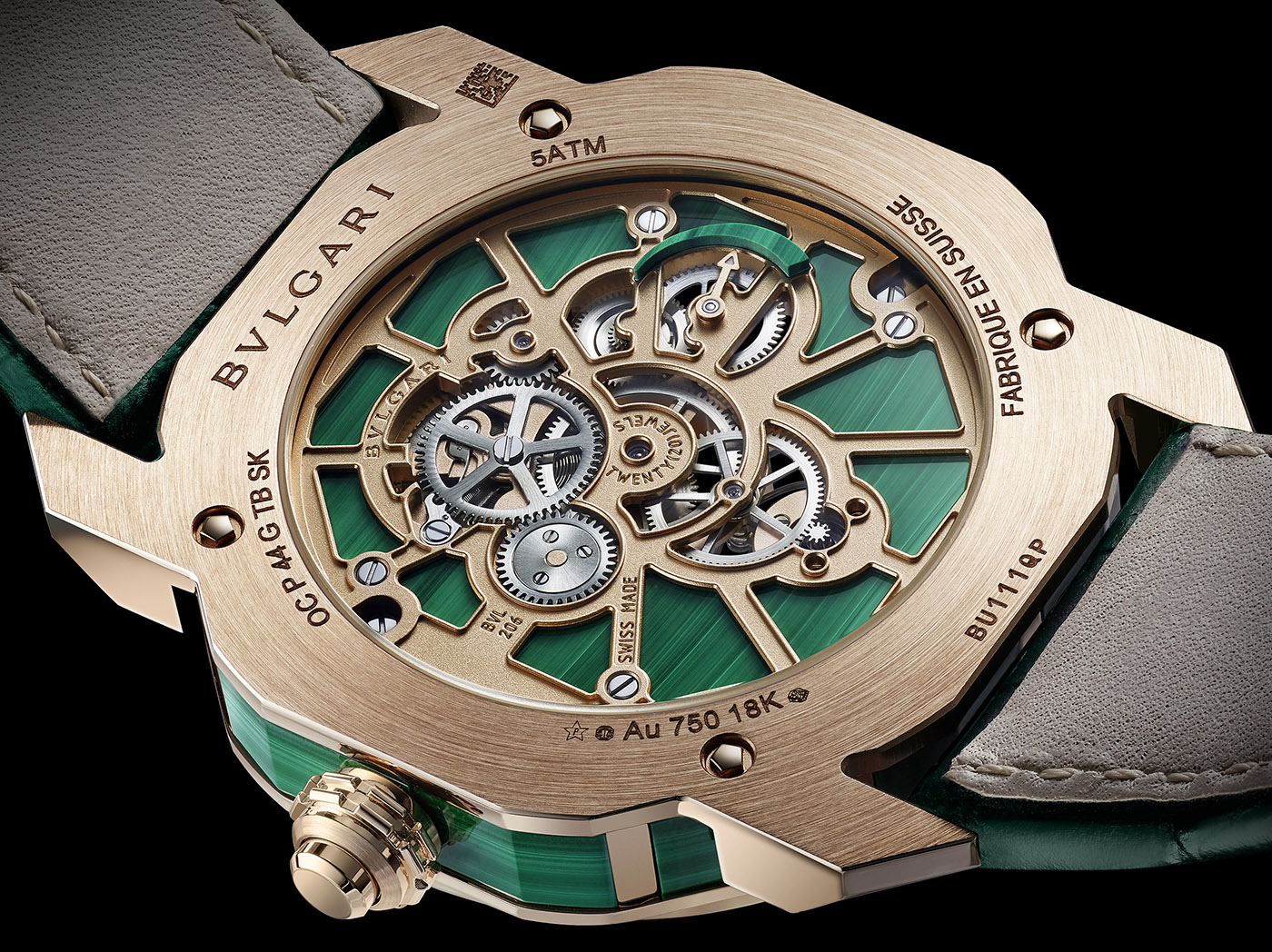 Bulgari powers the Octo Roma Naturalia line with its in-house BVL 206 handwound skeleton flying tourbillon movement, visible through both the skeleton dial and the sapphire display caseback window. The view from the rear mirrors the dial side, with a hub-like network of blasted bridges featuring raised polished edges. This web of elements features rounded windows as well for the gear train, underpinned by a thin slice of stone covering the main plate. The power reserve indicator is playfully integrated into the overall theme in initial images, with an arrow shaped hand and a raised stone sweep indicating the current level of winding. Bulgari keeps the technical specifications of the BVL 206 close to the vest, but the movement does provide a solid 64 hours of power reserve. To complete the Octo Roma Naturalia series, buyers can choose between alligator leather straps in black, green, and navy blue. 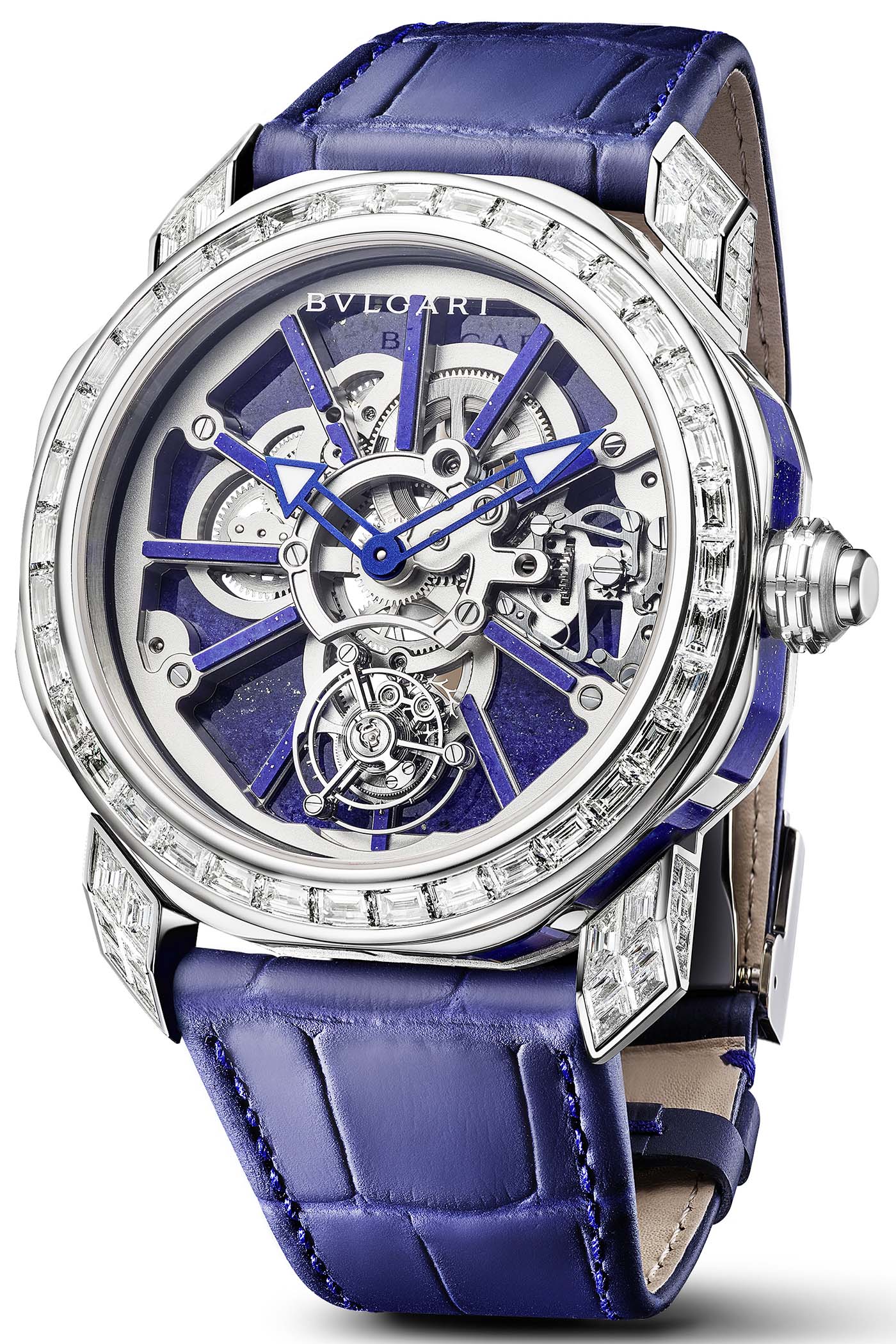 Combining a novel customization concept with a striking stone rendition of the brand’s keystone modernist design, the Bulgari Octo Roma Naturalia line is both a dramatic timepiece series in its own right and a pilot program for future bespoke Bulgari offerings. The Bulgari Octo Roma Naturalia series is available for order now exclusively through Bulgari boutiques, with a starting MSRP of €90,000. For more details, please visit the brand’s website.