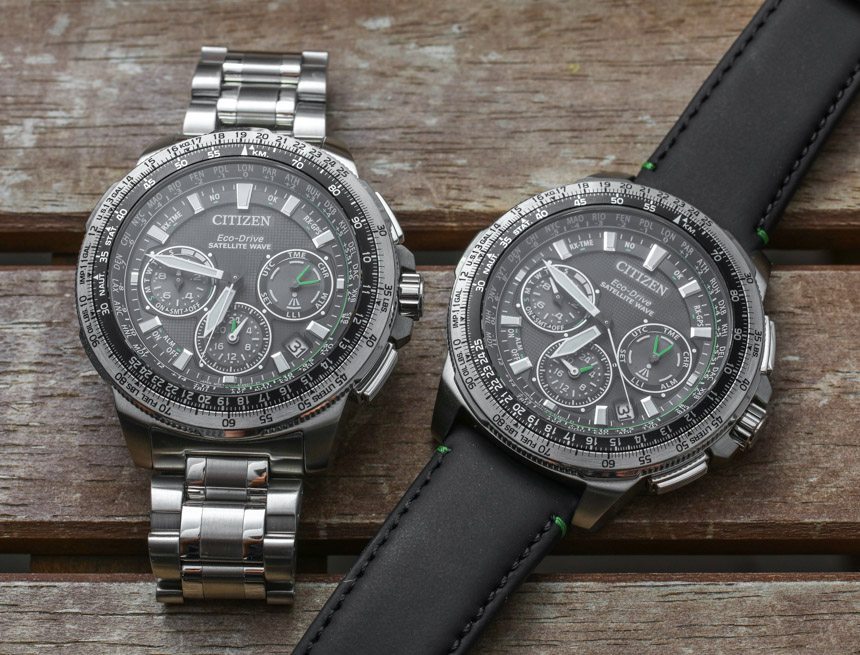 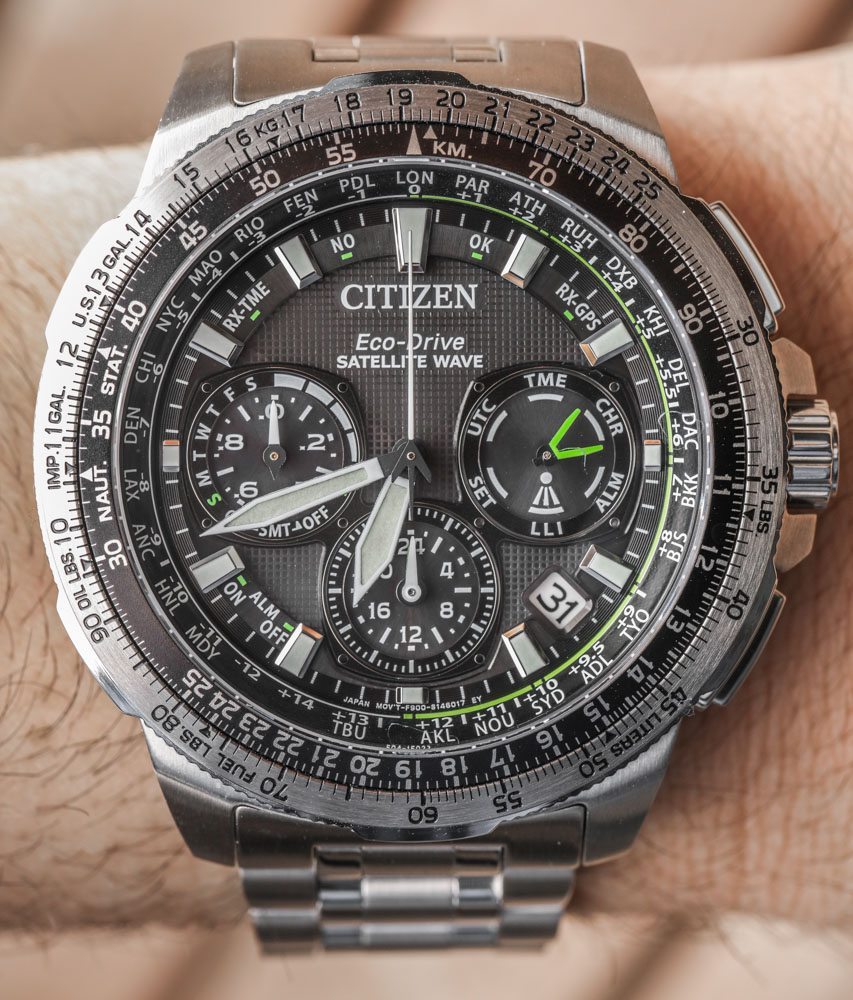 We are now in the era of the GPS watch – which is a segment that, in my opinion, defines the apex of traditional electronic watch technology. In this review of the Citizen Promaster Navihawk GPS timepiece, I will discuss what makes this product so impressive, why I like it, what it is not, and what the future might hold for truly useful watches of this kind. 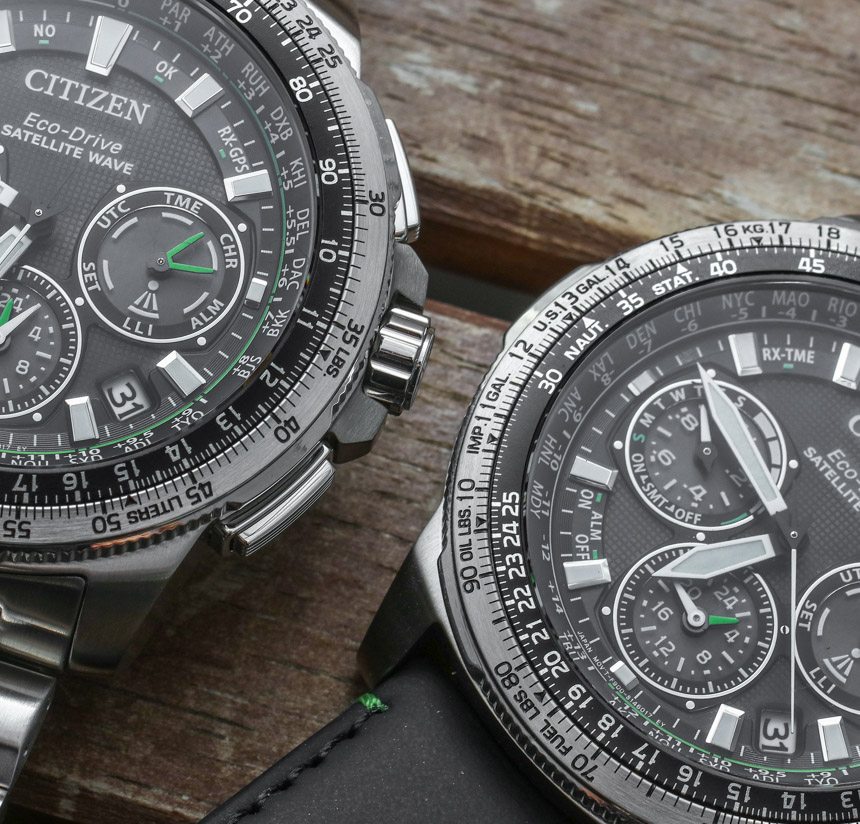 It is difficult to consider how to talk about GPS watches once again, as we have been covering modern GPS-equipped timepieces for quite some time. While Citizen didn’t invent the GPS watch, it did arguably start the modern trend of “self-sufficient” GPS timepieces with the introduction of the Citizen Satellite Eco-Drive back in 2011. Today, there is a healthy competition between the big three Japanese watch makers – Casio, Seiko, and Citizen – to each promote their own take on the modern GPS watch.

What is a modern GPS watch in this context? For me, a modern GPS watch is self-sufficient (self-charging battery, or a battery that lasts a long time), does not need to connect to a host device (like most smartwatches do), is durable (can be taken on adventures), and is able to offer a large amount of utility to the wearer. While brands like Garmin have their own GPS watches, it is the Japanese who are leading the pack when it comes to modern self-sufficient GPS watches, in my opinion. Thus, many timepieces which have very short battery lives (smartwatches), or have other ergonomic or durability downsides, should not be included in this particular category of GPS watches. 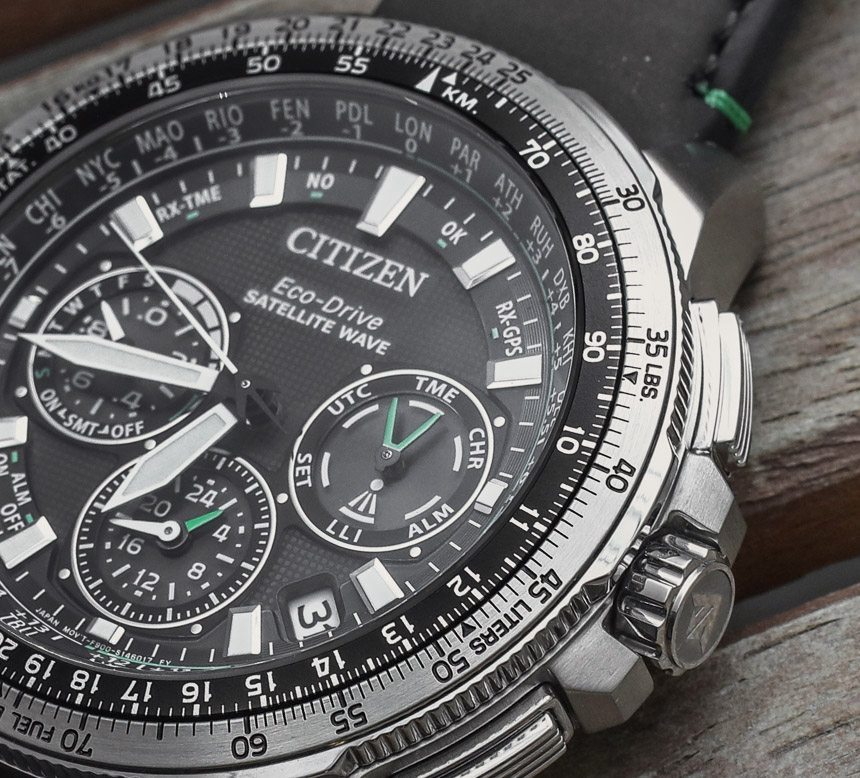 Of course, the idea of a GPS watch is a beautiful thing. Evolving from watches which receive radio signals (where available) from stationary atomic clocks around the world, GPS watches receive signals from global positioning satellite arrays. These constantly beamed signals offer the time and calendar information, as well as location information (time zone). Thus, a modern GPS watch is able to either manually or automatically receive these signals so that the time on your wrist is perfectly accurate. 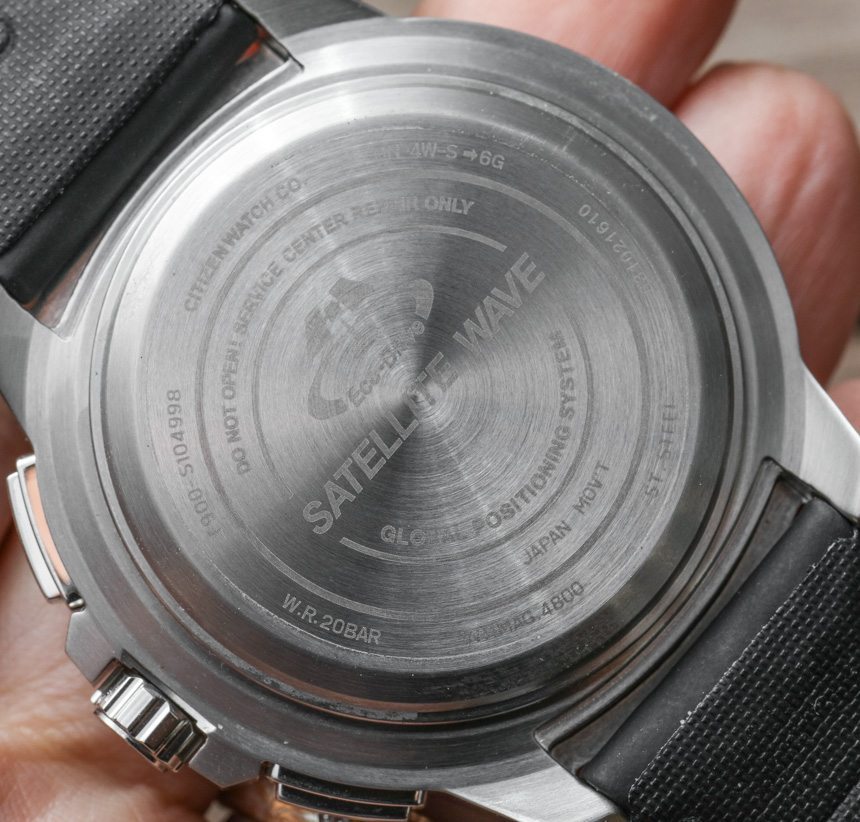 Mechanical watches are accurate to a few seconds a day, while traditional quartz movements are accurate to a few seconds per month. Combine a quartz movement with the ability to update itself with GPS signals, and you are talking about the ability to have perfect accuracy anywhere on the planet assuming you have line-of-sight to the sky. Moreover, Citizen’s Eco-Drive movements are light-powered. Citizen produces special Eco-Drive dials which allow light to enter through the dial to a photo-voltaic cell right underneath. The trick that Citizen is able to offer versus its competitors is a dial that allows light to enter, but does not look like anything but a traditional watch dial. In the context of the Citizen Promaster Navihawk GPS, what I like about it so much is that it feels like a traditional watch with the light-powered and GPS-equipped elements of the movement being more or less hidden or secret. 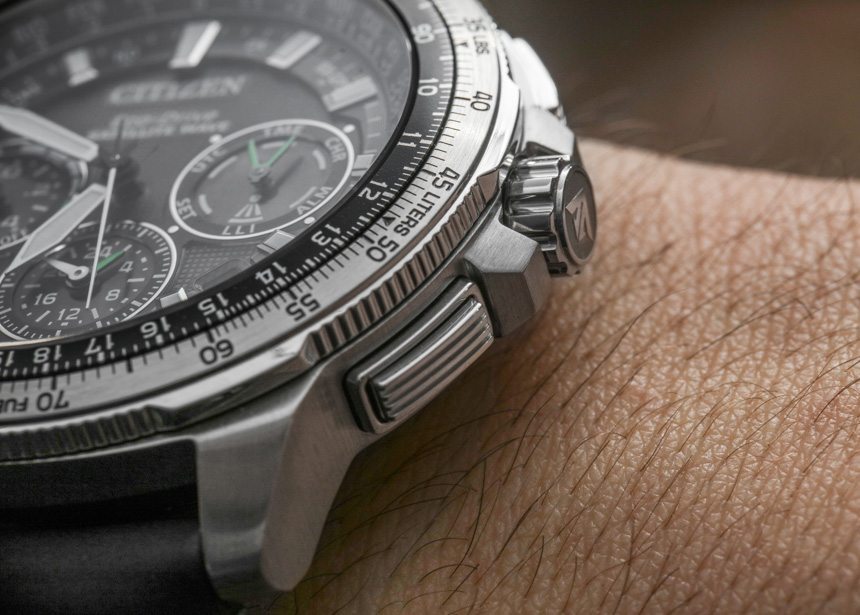 Inside of this Citizen Promaster Navihawk GPS watch is the Citizen-produced (we visited their impressive Japanese factories here) caliber F900 Eco-Drive movement. This GPS movement is still pretty new, and was originally introduced in the Citizen Eco-Drive Satellite Wave F900 watch. The Satellite Wave collection remains a design winner for Citizen, but is a lot less mainstream or traditional than designs like this Navihawk. Citizen is experimenting a lot with less “techie” designs seeing how easily it can make GPS watches fit within their more mainstream timepieces. There is also a more simple movement that doesn’t have all the features of the F900. That used to be the F100 movement, but is now the F150 movement, which you can find in watches such as the Citizen Satellite Wave World Time GPS watch (the nomenclature can get a bit confusing, I know). A major goal for the brand is to create smaller and smaller GPS-equipped watch movements, so that they can eventually start making women’s GPS watches as well. So with that said, while Citizen’s (and those from Seiko as well as Casio, for that matter) GPS watches aren’t small, they are perfectly wearable (and thin enough) given today’s size standards when it comes to men’s watches. 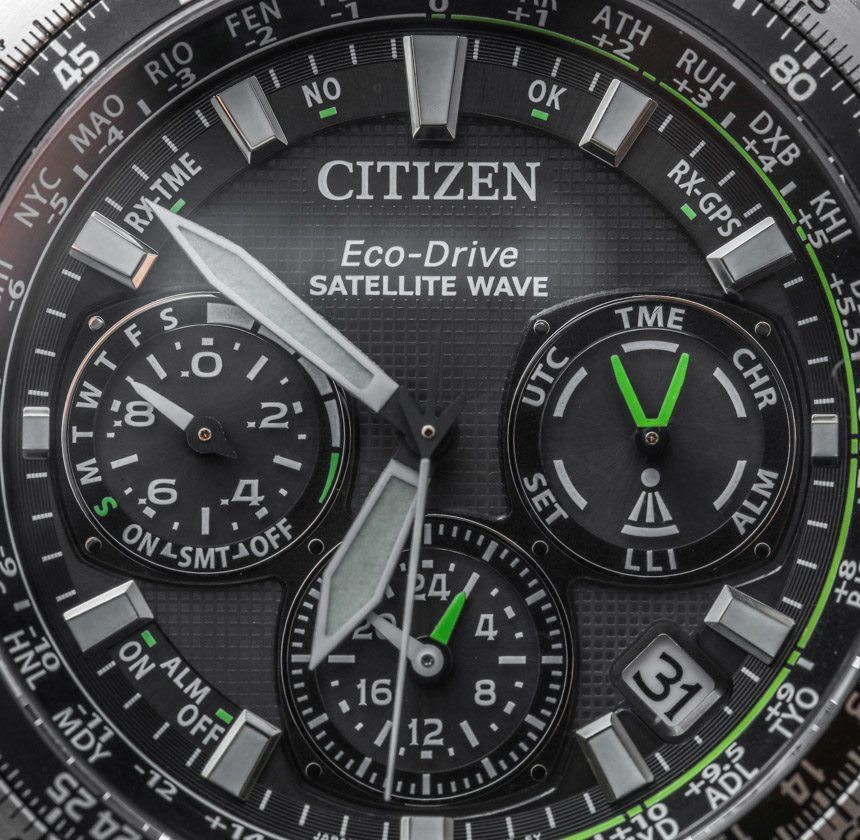 The caliber F900 movement builds on an interface that Citizen has been working on for decades. The main dial offers the time, date, day of the week, and second time zone at a glance. Using the function selector and pushers, you have further access to a battery charge indicator, chronograph, alarm, and second time zone adjuster (world time). There is a slight learning curve to using all the movement’s features, but it really isn’t that bad. 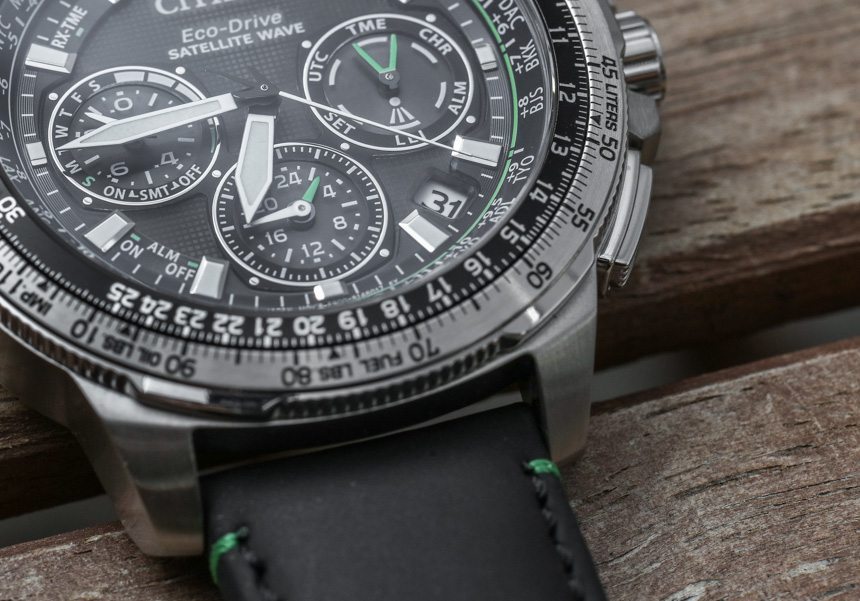 An amazing and endearing irony in this super high-tech watch is the design integration of a rotating slide-rule bezel. This is part of the Navihawk collection heritage – which for a long time has existed as Citizen’s “professional” pilot and aviation watches. Most people think of dual analog/LCD screen displays when they consider many of the Navihawk watches that are on people’s wrists. The Citizen Promaster Navihawk GPS has a fully analog dial, which lends itself well to a classier, more timeless look that I appreciate. 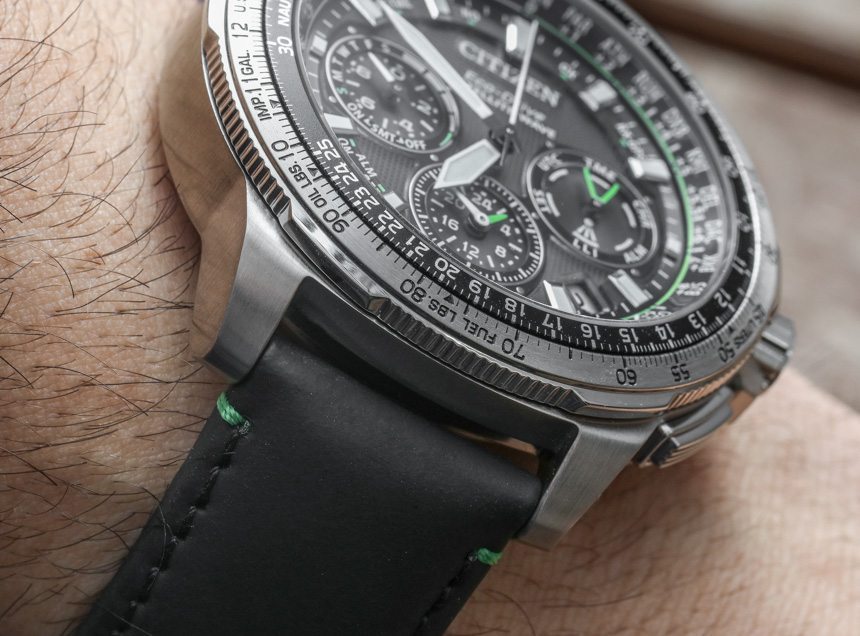 Anyhow, rotating slide-rule bezels (made popular by the Breitling Navitimer collection) are an arguably handy but very archaic way of performing mathematical equations on your watch. In that link, you can learn more about how to use them. I personally never have, but these “tools” on watches more or less serve aesthetic versus utilitarian roles these days (even though you can technically still use it). The bezel has a smooth, but relatively secure rotating action. 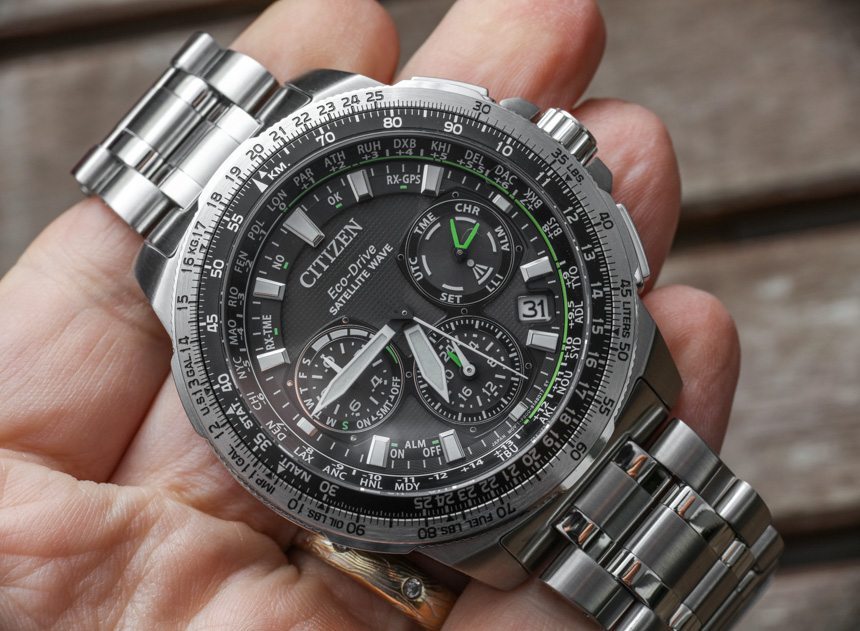 Dial-wise, I like what the brand has done with the Citizen Promaster Navihawk GPS for the most part. Yes, the dial is busy, but purposefully so. Everything there is meant to do something, and for the most part, there are minimal decorative elements. Where there is dial decoration it is meant to prevent the watch from looking boring. Citizen has a nicely textured face and polished rings around the subdials. The hour markers are perhaps the most blingy element on the dial, but in a good way since the lume-topped, applied and faceted hour markers are both visually attractive and very legible. This is one of those busy dials that doesn’t make it hard to read the time. 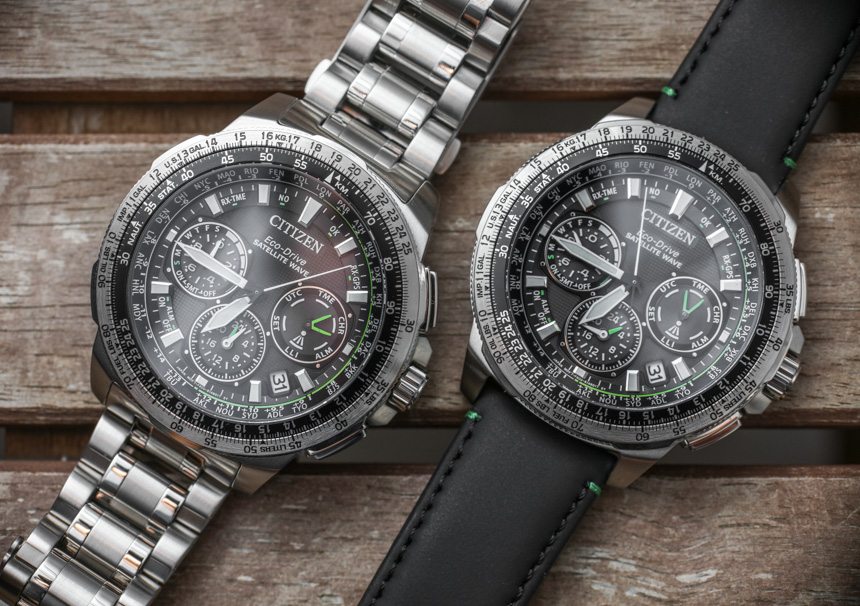 I was lucky enough to be in Japan at Citizen while they were actually assembling these exact watches. Even though this is a “quartz” watch, how they are assembled is almost the exactly the same as a more expensive mechanical watch. The hands are applied by hand, and each dial is carefully inspected for damage or dirt resulting from the construction process – which, again, is mostly done by hand. These watches are lovingly made, and for Citizen represent the current apex of their “professional” Promaster watch collection.