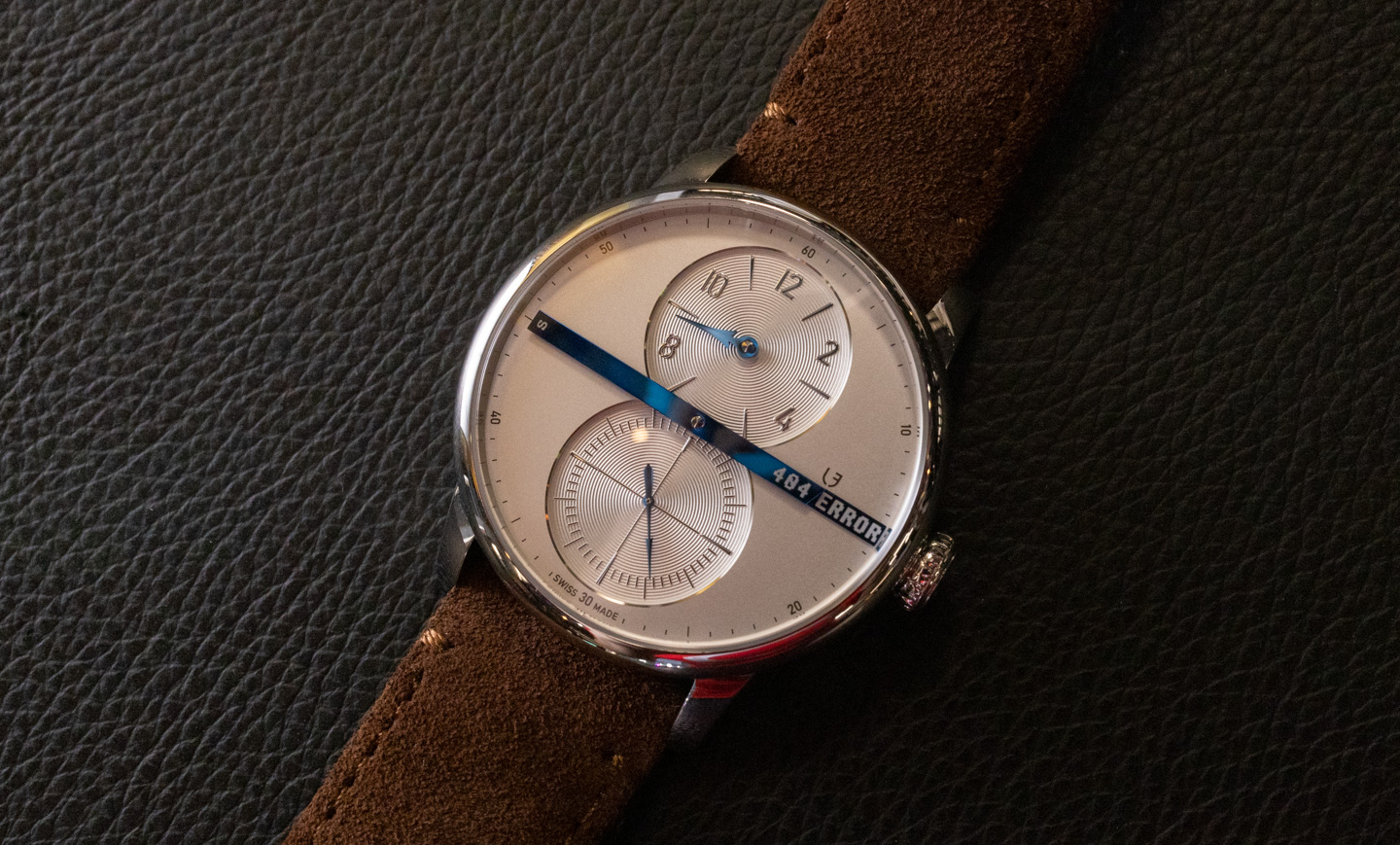 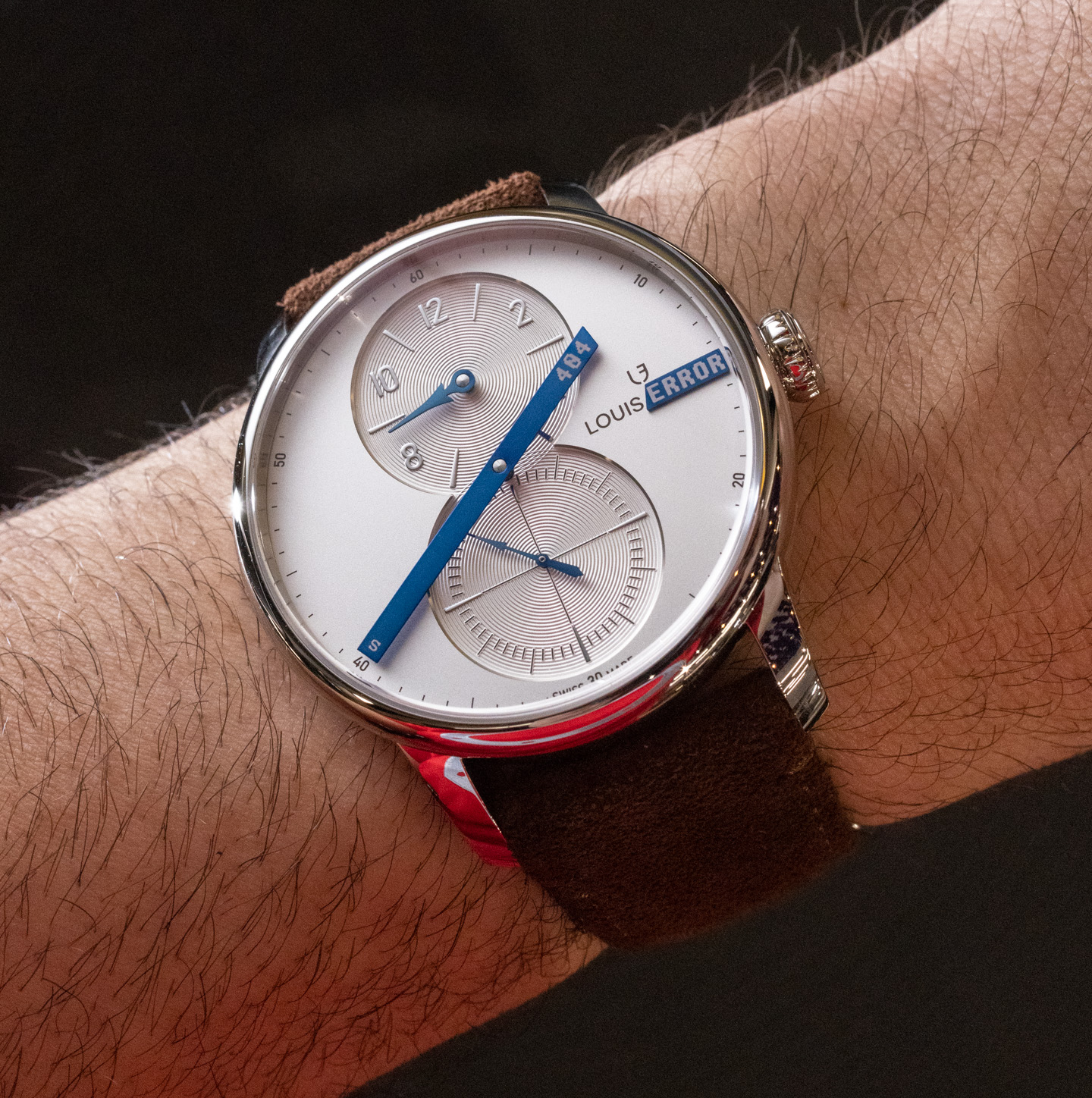 Under the stewardship of Manuel Emch, Swiss watchmaker Louis Erard has been taking a decidedly artistic, playful approach to many (of course, not all) of its new limited-edition products. A great example is the Internet HTTP protocol “404 Error“-themed reference 85237AA61.BVA31 Le Regulateur Louis Erard x seconde/seconde/ (first introduced on aBlogtoWatch here). This is a watch with several layers of subtle humor done in collaboration between Louis Erard and Paris-based watch modifier seconde/seconde/. The latter company gained some notoriety for taking vintage watches and replacing one or more of the hands with special ones inspired by modern pop culture, often from video games and produced in a pixelated artistic style. In this instance, seconde/seconde/ worked with a brand-new watch and applied its aesthetic to a Louis Erard Excellence Regulator watch.

According to Louis Erard, the Le Régulateur Louis Erard x seconde/seconde/ is a watch meant to celebrate taboos and humor. First is the “digital” nature of the theme, which is the Internet browser-based 404 error code. To discuss this concept on a traditional mechanical timepiece is something that has not been done before and results in a sort of artistic cognitive dissonance that has the intended effect of stopping people to think about its meaning and implication. The humorous goal of the watch is a bit less philosophical and is a more direct form of tongue-in-cheek self-deprecating humor. The pronunciation of “Louis Erard” sounds a lot like “Louis Error.” Thus, the brand is intentionally making fun of itself by putting an “Error” plaque on the dial over where the “Erard” part of the brand name would otherwise be. 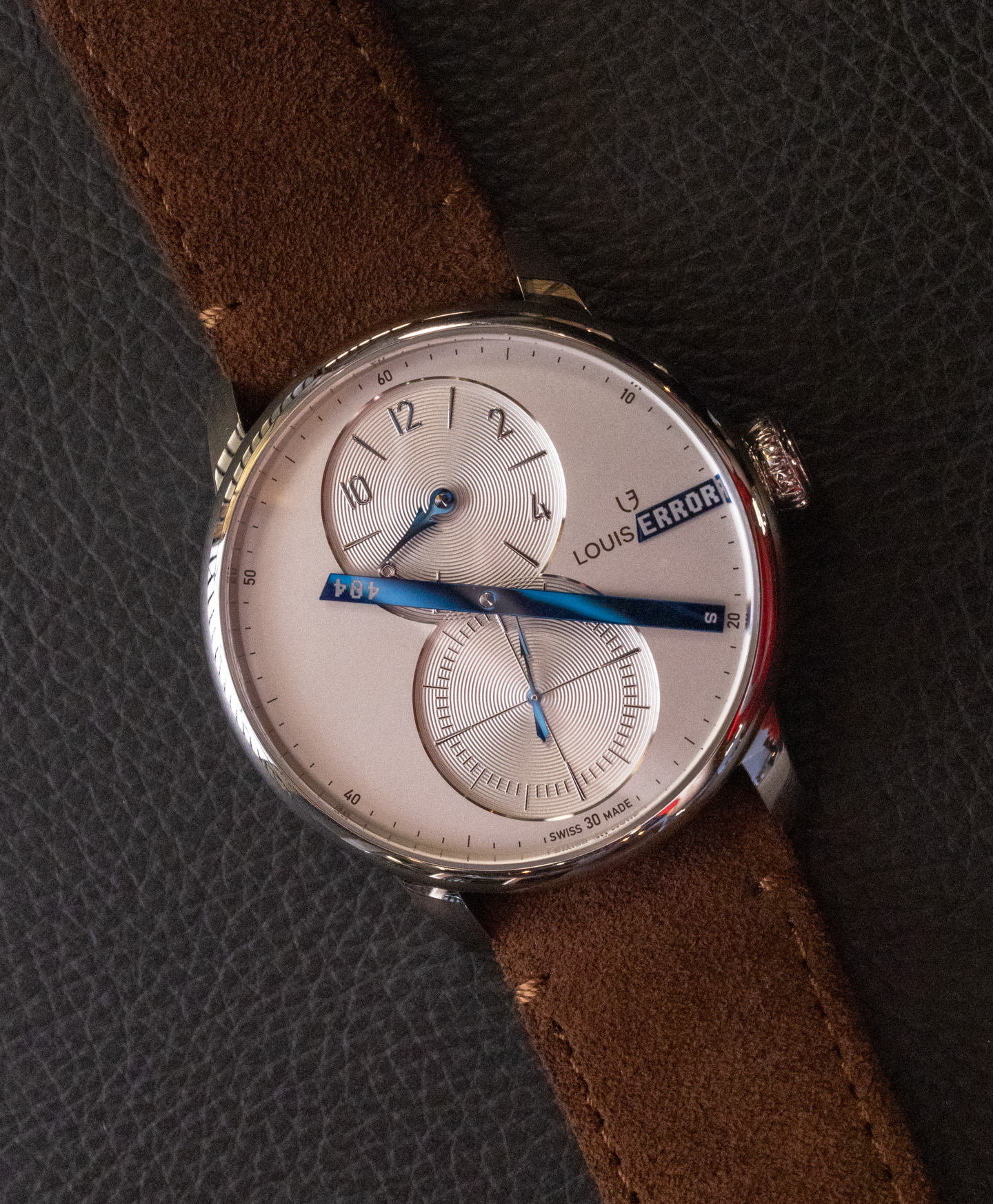 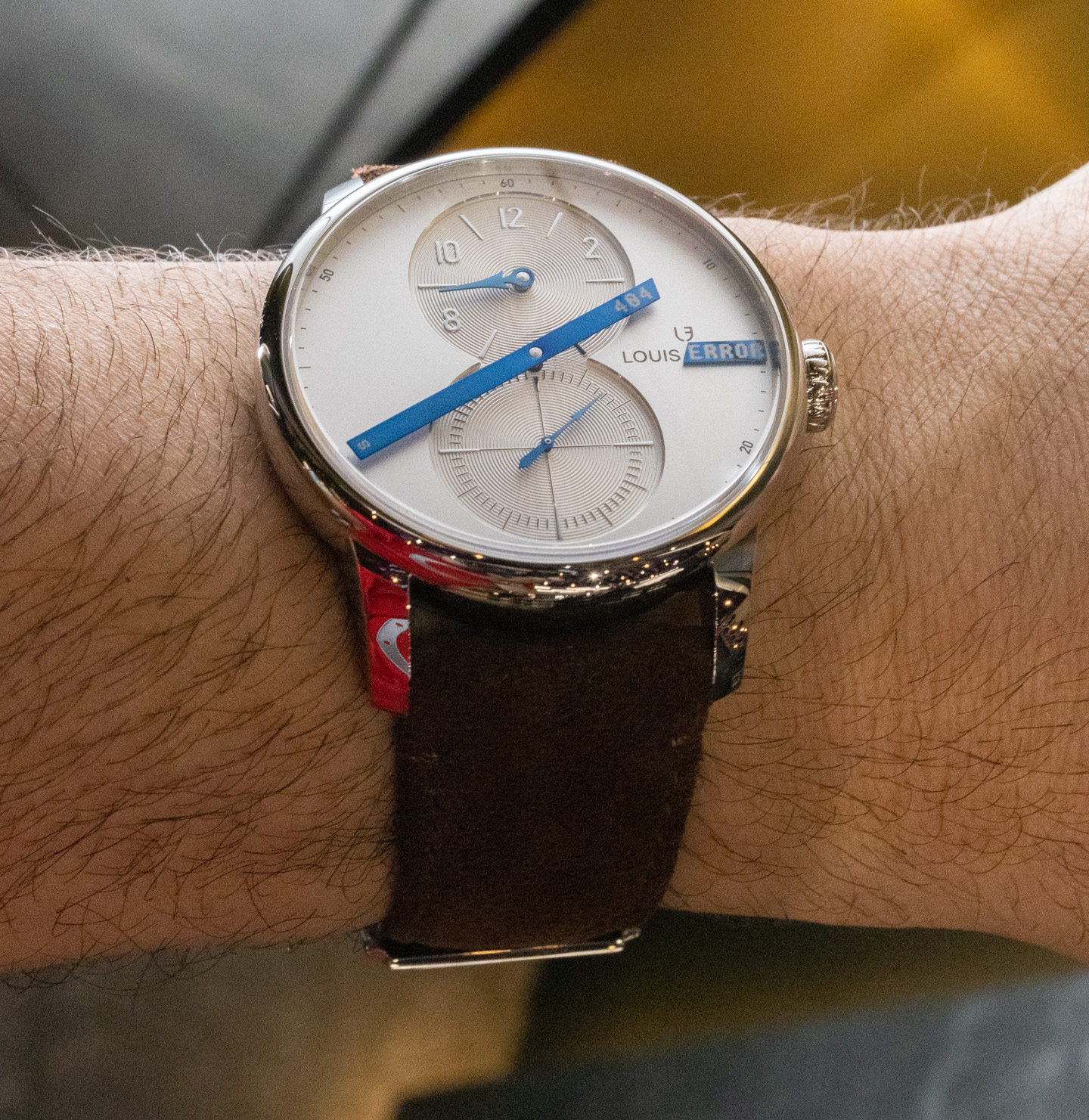 The watch dial itself, for the most part, is standard Louis Errard Excellence Regulateur in silver with slightly recessed subdials for the upper hour hand and the lower second dial. The main dial’s minute hand has been shaped to look like a blue CAT5 (ethernet) cable that once per hour aligns perfectly with the “Error” label to spell out “404 Error.” The rest of the hands on the dial offer the same blued-steel tone. The blue and silver watch theme is attractively matched to brown suede nubuck calf leather strap.

On the wrist, the Le Régulateur Louis Erard x seconde/seconde/ case is 42mm-wide in polished steel. It has a sapphire crystal over the face and is water resistant to 50 meters. There is also a sapphire crystal on the rear of the case that offers a view of the movement. The movement inside is the Swiss Made Sellita caliber SW266-1 automatic. It operates at 4Hz with 38 hours of power reserve. This is a regulator-style movement, so, as stated above, it has separate dials for the hours, minutes, and seconds. 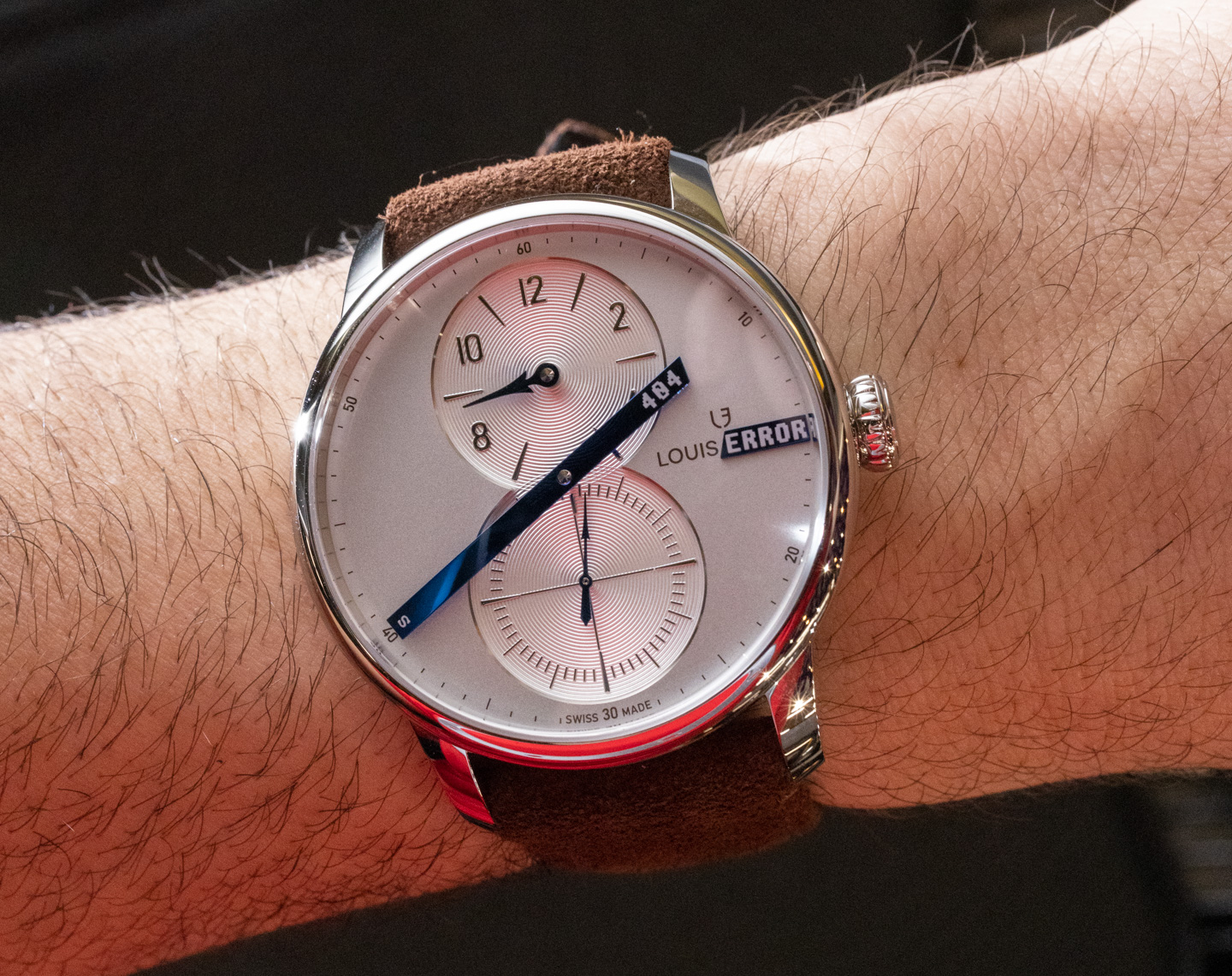 It takes the right type of humorist to get a real chuckle by reading “Louis Error” versus “Louis Erard” but I think anyone can appreciate the idea and refined execution of these interesting limited-edition collaboration watches. Limited to 178 pieces, the Le Régulateur Louis Erard x seconde/seconde/ “Louis Error” reference 85237AA61.BVA31 has a retail price of 2,404 Swiss Francs. Learn more at the Louis Erard website here.