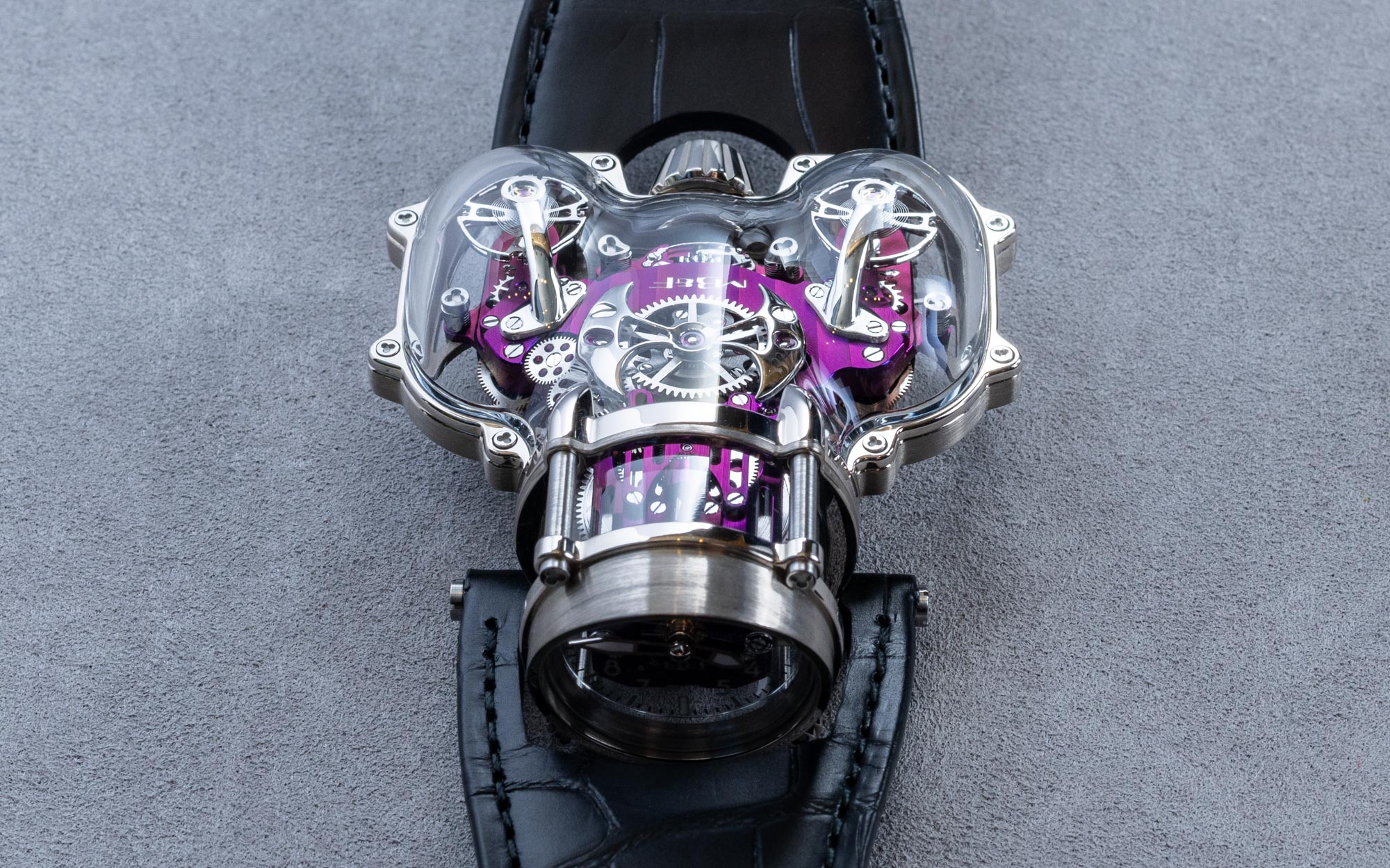 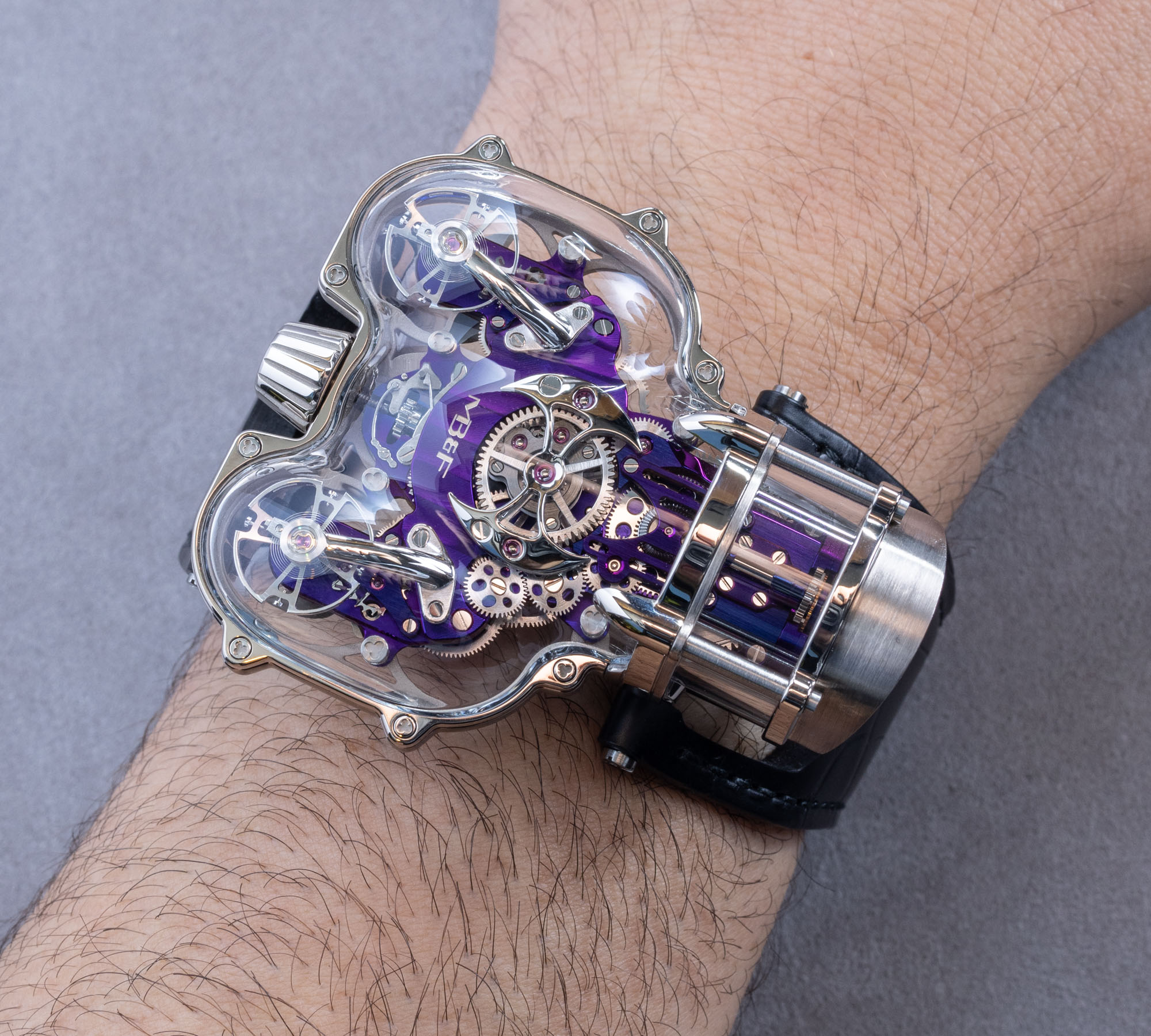 Over the last few years, Geneva-based MB&F has gone from being the leader of high horology’s underdog league to a company with several-year-long wristwatch waiting lists. For a variety of factors, brands like MB&F who for 20 years have been making no-compromise weird stuff to dedicated niche fans, has now reached enough critical momentum that it is a known commodity with a wider base of luxury buyers. In this new phase, MB&F has thankfully maintained much of its original zeal, as well as Max Busser’s understandably high standards for product novelty and quality. It is also great that it still likes being weird. A case in point is this rare rare MB&F Horological Machine Number 9 Sapphire Vision. Only five pieces were made, it has purple guts, and it has a price point north of $400,000.

To understand the history of this glass phallus, let us go back to 2018 when MB&F originally released the HM9 Flow. Imagined like a small wearable aircraft (with swoopy aerodynamics), the Horological Machine No. 9 Flow (aBlogtoWatch hands-on here) was a return to the concept of the HM4 but with a bit more of an interesting movement (and perhaps a bit less delicate looking). One of the interesting whimsical features of the HM9’s movement is the dual spinning balance wheels which are connected via a planetary differential. Their rate results average out and, in theory, help the movement to be more accurate. Visually, you have the authentically satisfying visual animation of the dual oscillating regulation systems to look at. 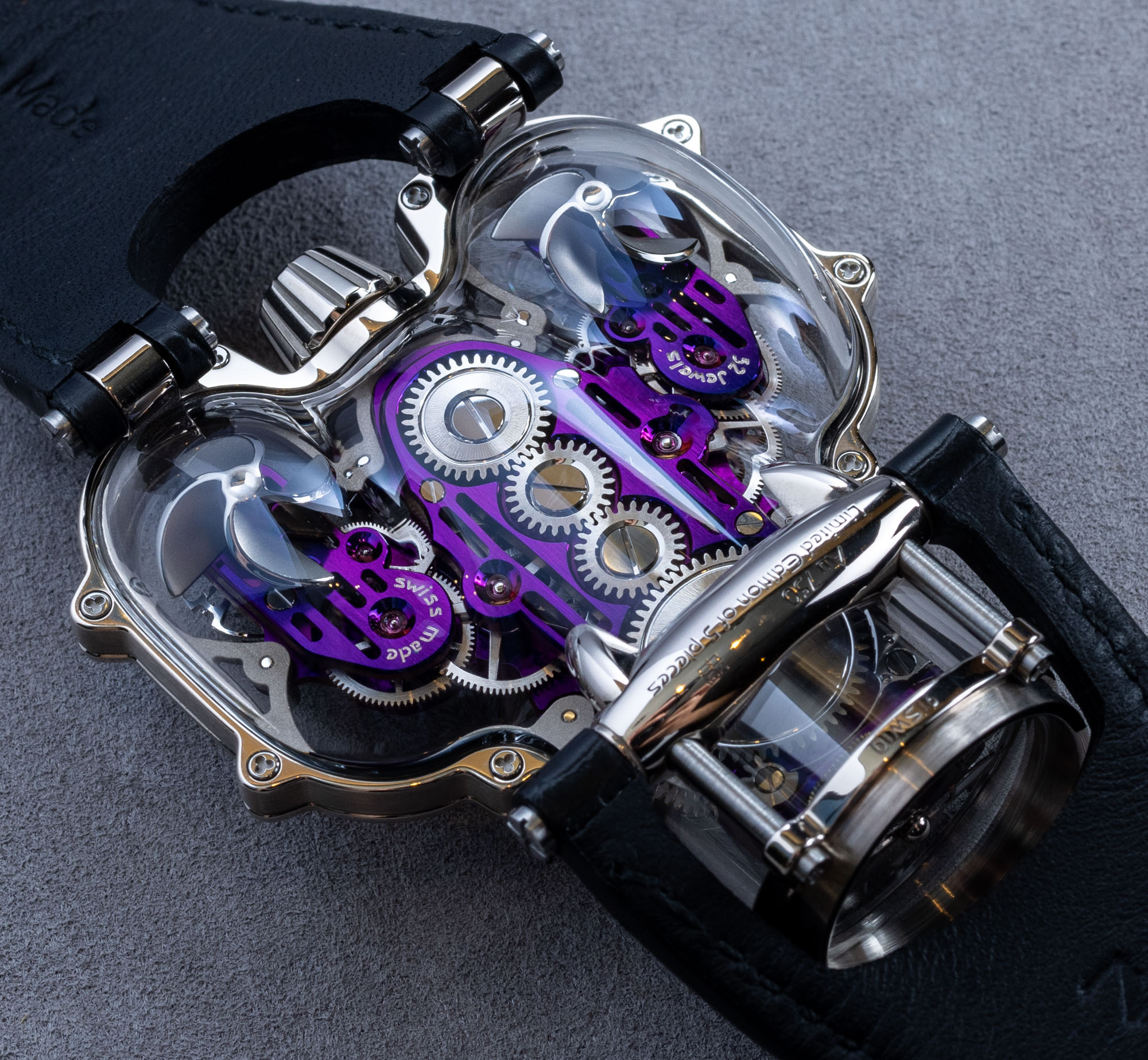 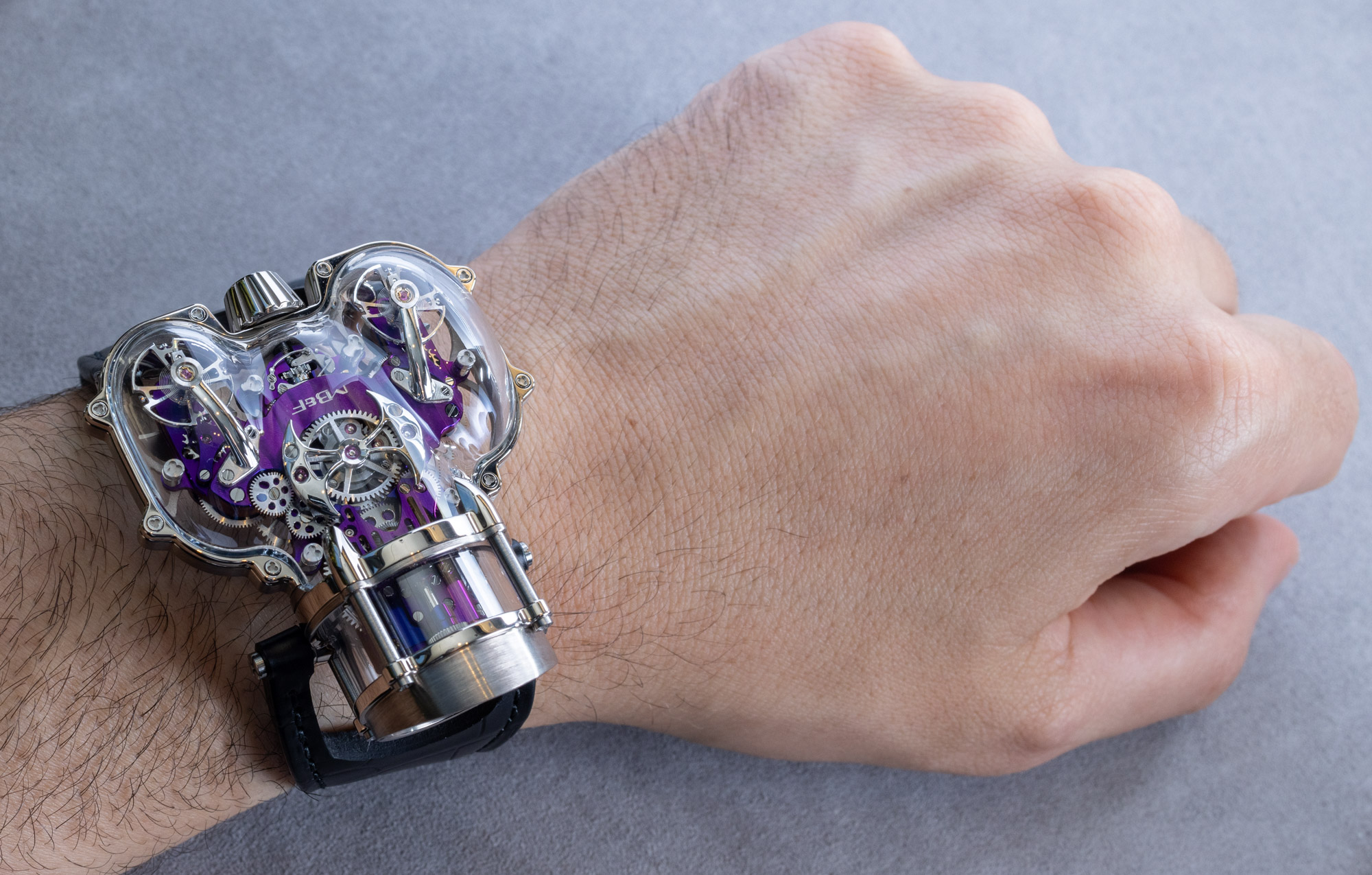 In 2019, the HM9 was introduced in 18k red gold, and in 2021, MB&F debuted the HM9-SV set of watches with colorful movements and mostly sapphire crystal cases. If the HM9 was meant to look like an object that travels through the air, the HM9-SV imagines itself as an underwater exploration vehicle — now complete with propellers. Indeed, the “new” mechanical feature in the HM9-SV is a set of geared turbine propellers mounted to the underside of each of the regulation systems. At a glance this looks as though it is an automatic winding system — Urwerk did something similar — but in fact, the spinning turbines, which move with geared weights, are just a fun feature and not connected to the movement or the automatic winding system. Romain Jerome did something similar long ago in one of its Titanic DNA Chronograph watches, but MB&F clearly gets the gold for doing it in the most visually splendid way here. The movement, again, is manually wound.

In MB&F’s world, “SV” stands for Sapphire Vision and denotes special versions of its watches that has important case components produced from sapphire crystal. These days, sapphire crystal is increasingly popular with high-end watches, but MB&F was an early innovator with the materials in using it for case materials. The HM9-SV is perhaps its most ambitious Sapphire Vision watch to date given the overall assembly. For instance, MB&F needed to develop a “three-dimensional gasket” that goes between some of the sapphire case parts. This is how watchmakers keep dust and water out of the watch. Typically, these gaskets are flat, but in this case, MB&F needed to develop a novel three-dimensional one. 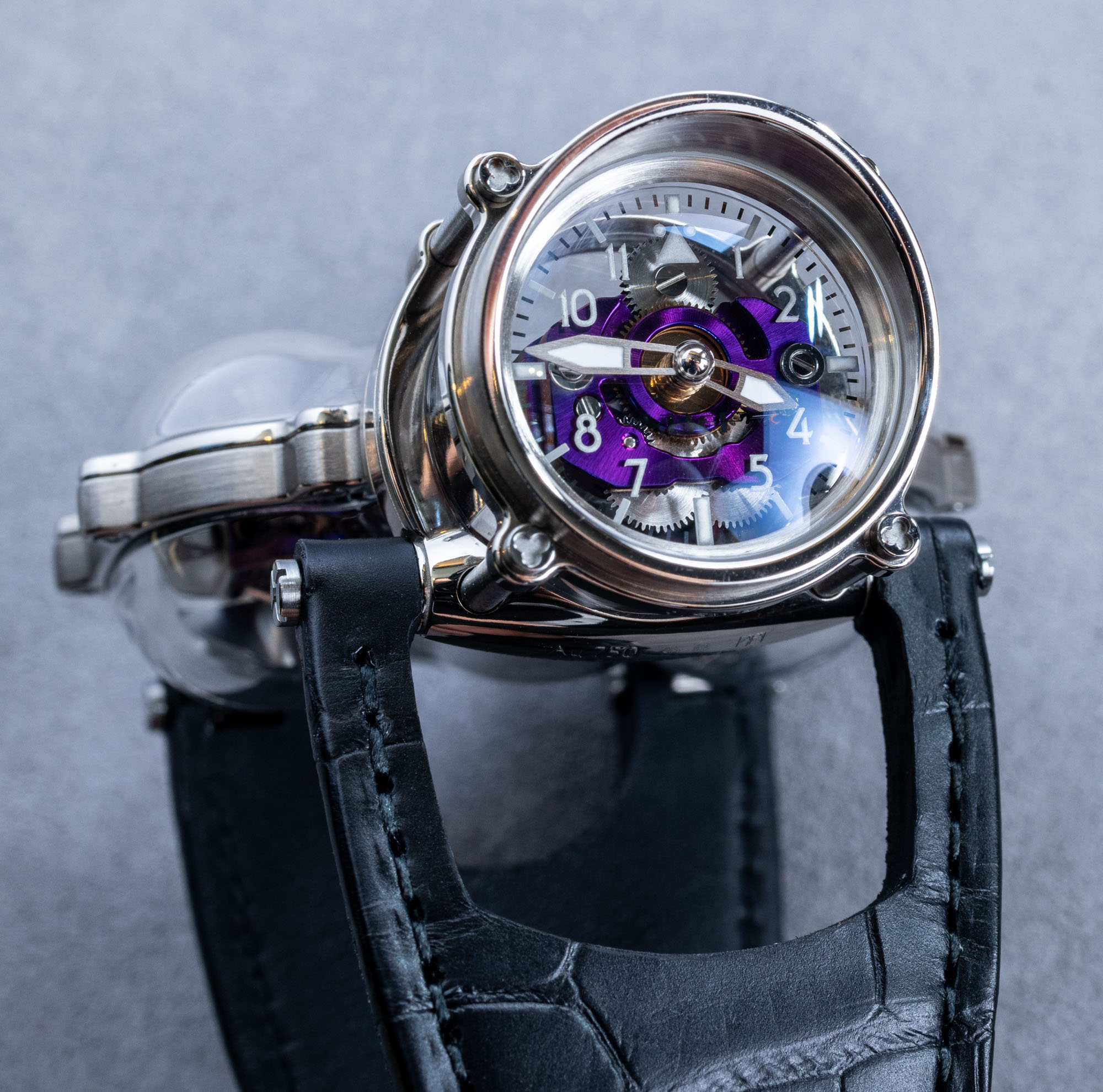 I’ve long spoken about how sapphire crystal cases require different assembly techniques versus metal when it comes to how to make a watch case today. The rigidity of sapphire means that you cannot tightly screw it down (like you would be able to with metal) because it can cause the sapphire to shatter. Interestingly, the HM9-SV seems to experiment with some new ways of holding sapphire crystal case pieces together in a wristwatch. MB&F’s designers actually appear inspired by how some underwater submersibles engineer hulls around large, smooth pieces of material like glass. In addition to sapphire crystal, the HM9-SV case uses gold metal segments. Here for the purple version of the HM9-SV the case metal material 18k white gold, but there are two other versions of the HM9-SV (there were four color versions total) which have 18k red gold metal in the case construction.

Despite all the special case construction and engineering, the water-resistance rating is 30 meters. The HM9-SV case size is 47mm-wide, 23mm-wide, and with a 57mm lug-to-lug distance. In a sense, these numbers mean litter at they are merely maximum values for a given angle. In truth, the HM9-SV watch case wears oddly, but comfortably, despite it being so visually long. And then there is the matter of its amusing shape which shows just how big MB&F’s balls really are. We tend to think it is great when at the same time an object makes grown timepiece enthusiasts like us weep with appreciation… and then at the exact same time offer endless jokes of the prurient variety on account of the suggestive shape of this wearable mechanical art for the wrist. 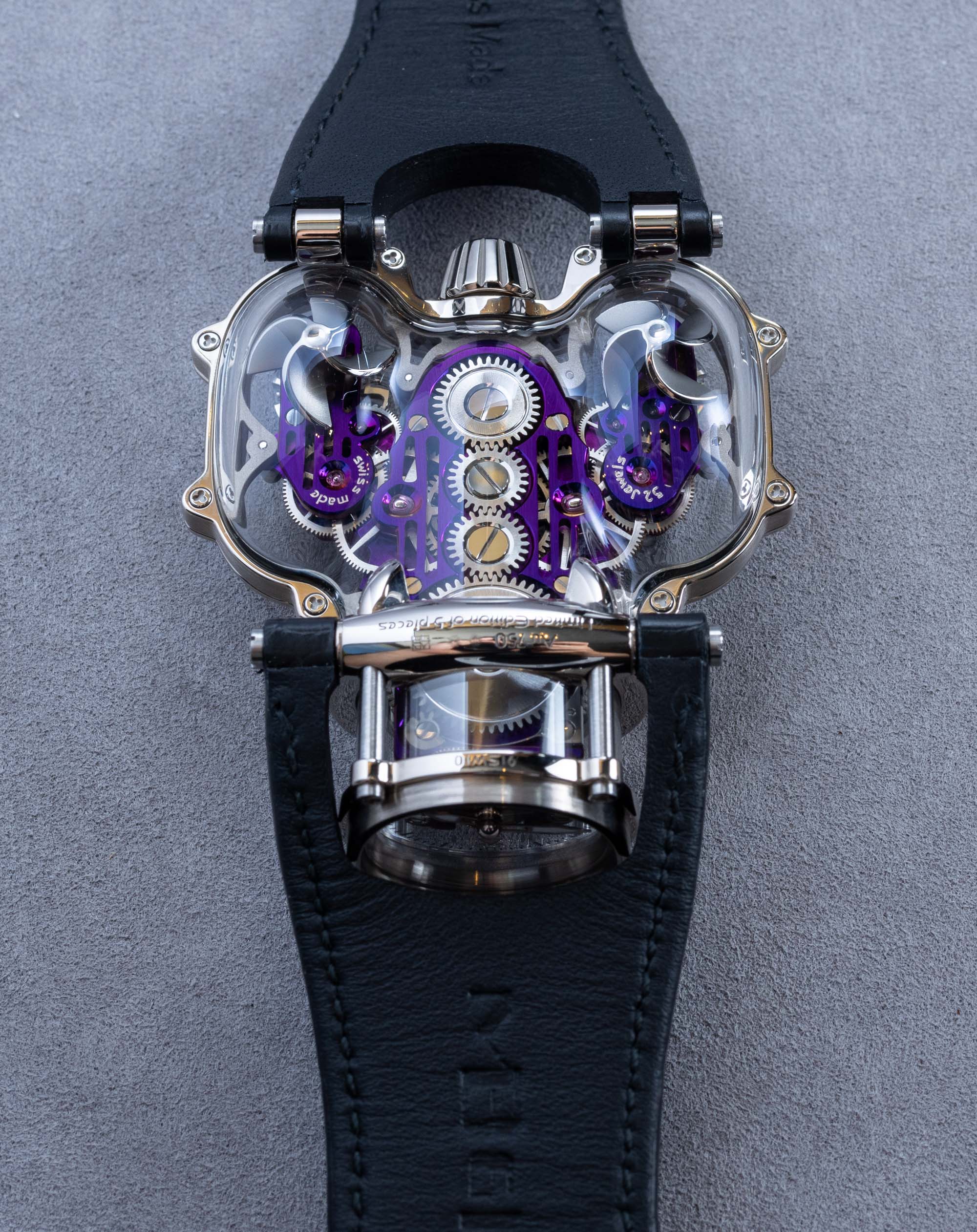 No, MB&F isn’t trying to make such a male watch, but if you look at the world of engineering and building, such similarly shaped objects happen to appear somewhat regularly. From phallic-shaped architecture to the form of your next luxury timepiece, MB&F implicitly knows that “if you build it, they will come.” Wearing one of these proudly sends… a message. The HM9 Flow merely hinted at this message. The new more bulbous and uniform shape of the HM9-SV takes that hint and more overtly suggests it. So, in addition to being an amazingly thoughtful piece of wearable horological art, the HM9-SV also offers endless amusement for the prurient 13-year-old within us all.

Despite being so fancy to look at and admire through the sapphire sheath, the in-house designed mechanical movement inside of the HM9-SV offers just the time with hours and minutes. It does this via a horizontally oriented display that indicates the time via hours and minutes on a small dial that points toward the face of the user. The also transparent dial is nevertheless decently legible with a ring of Arabic hour numerals and sporty hour and minute hands. The movement is made up of 301 parts, designed to be as symmetrical as possible, and features MB&F’s now distinctive raised balance wheel bridges. The dual balance wheels each operate at a frequency of 2.5Hz (18,000 bph), and the movement has a power reserve of 45 hours. I think a power reserve indicator somewhere on the movement would have been a nice idea — and this is exactly something that has found a way in some other manually-wound MB&F watches. 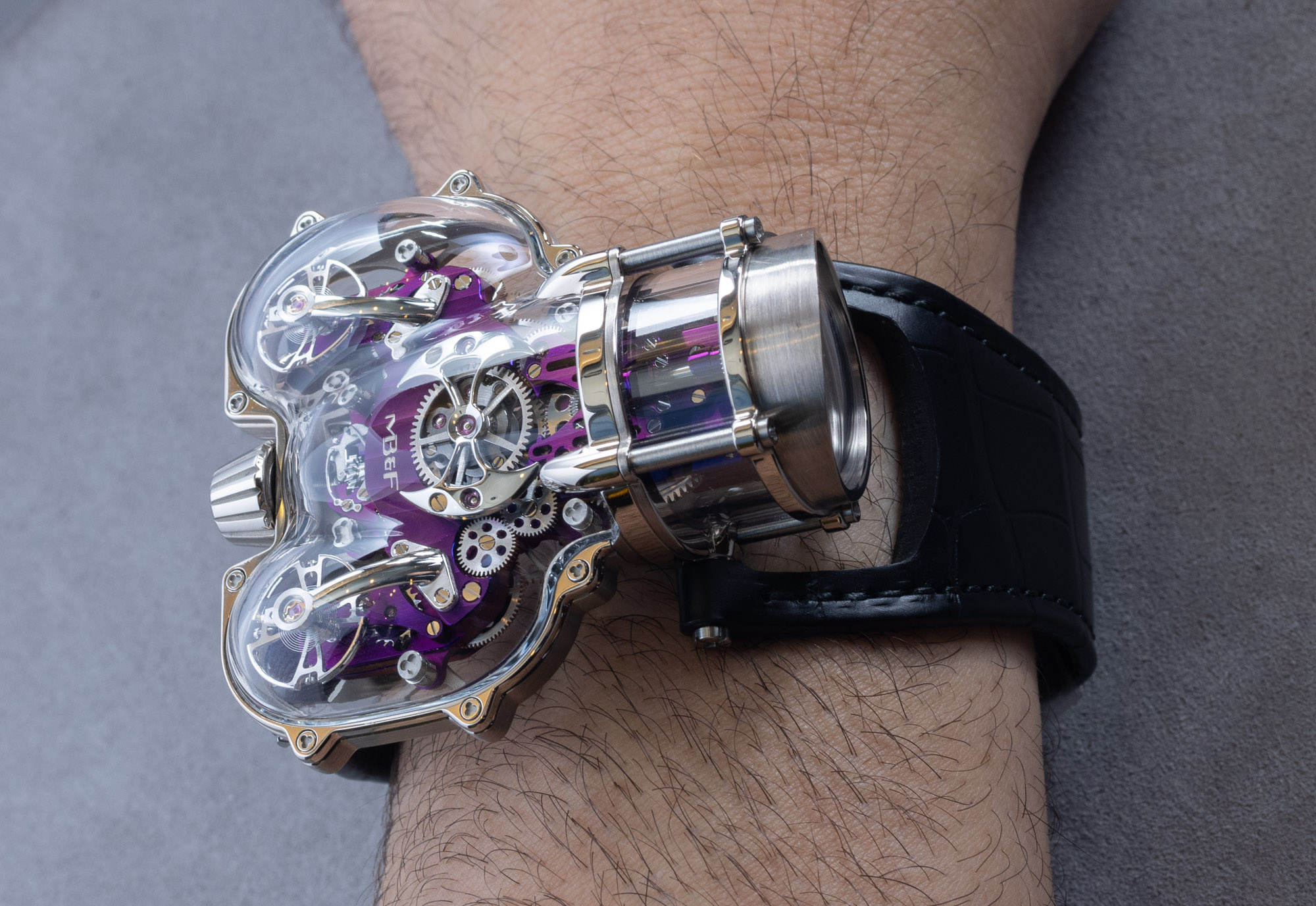 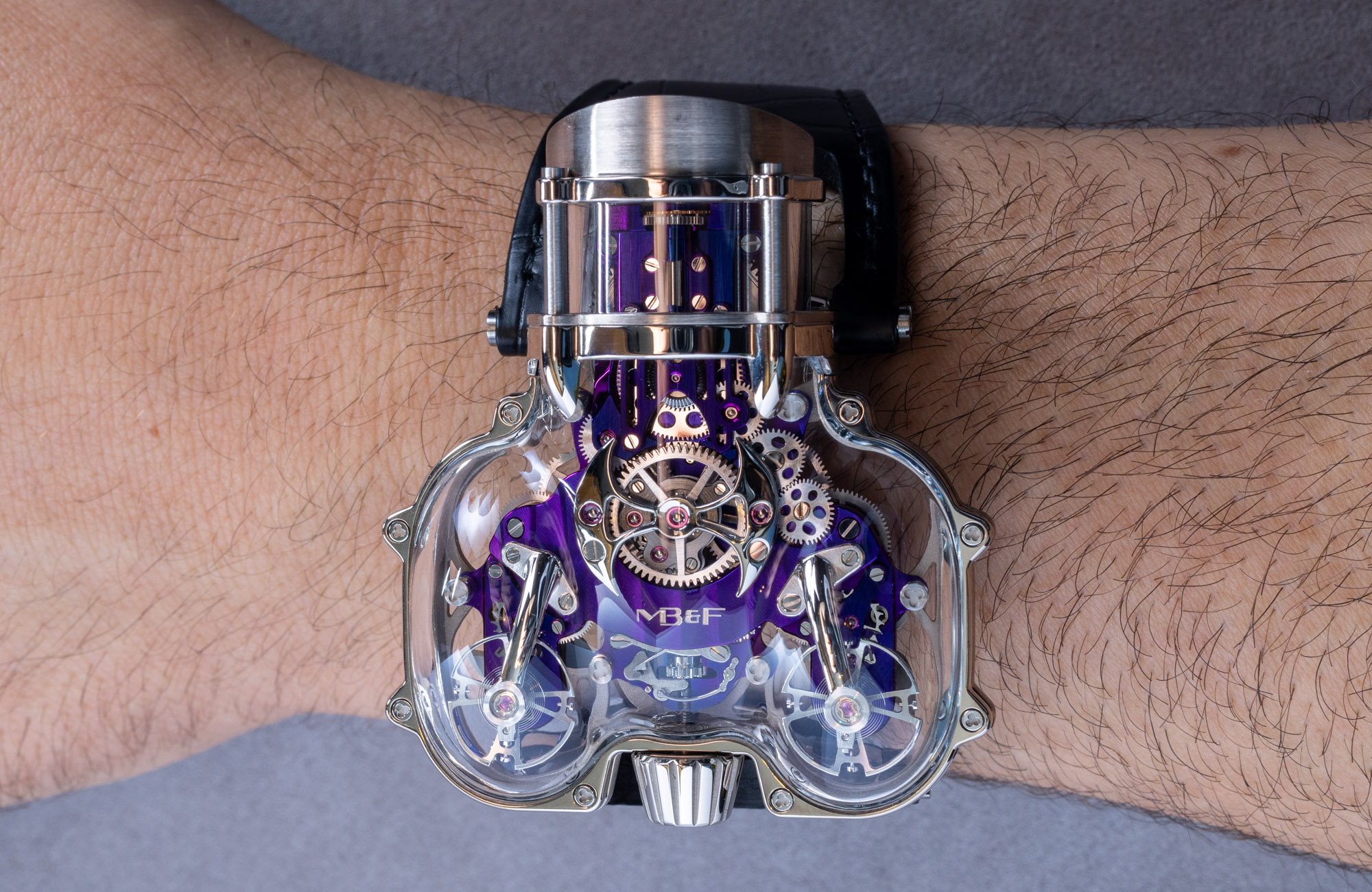 While most MB&F watches are produced in small numbers, this limited edition of just five pieces for four different colors is really limited. That means just 20 HM9-SV watches will ever be made, making this purple Floyd on wrist a rare and incredible species, indeed. Price is $440,000 USD. Learn more at the MB&F watches website here.