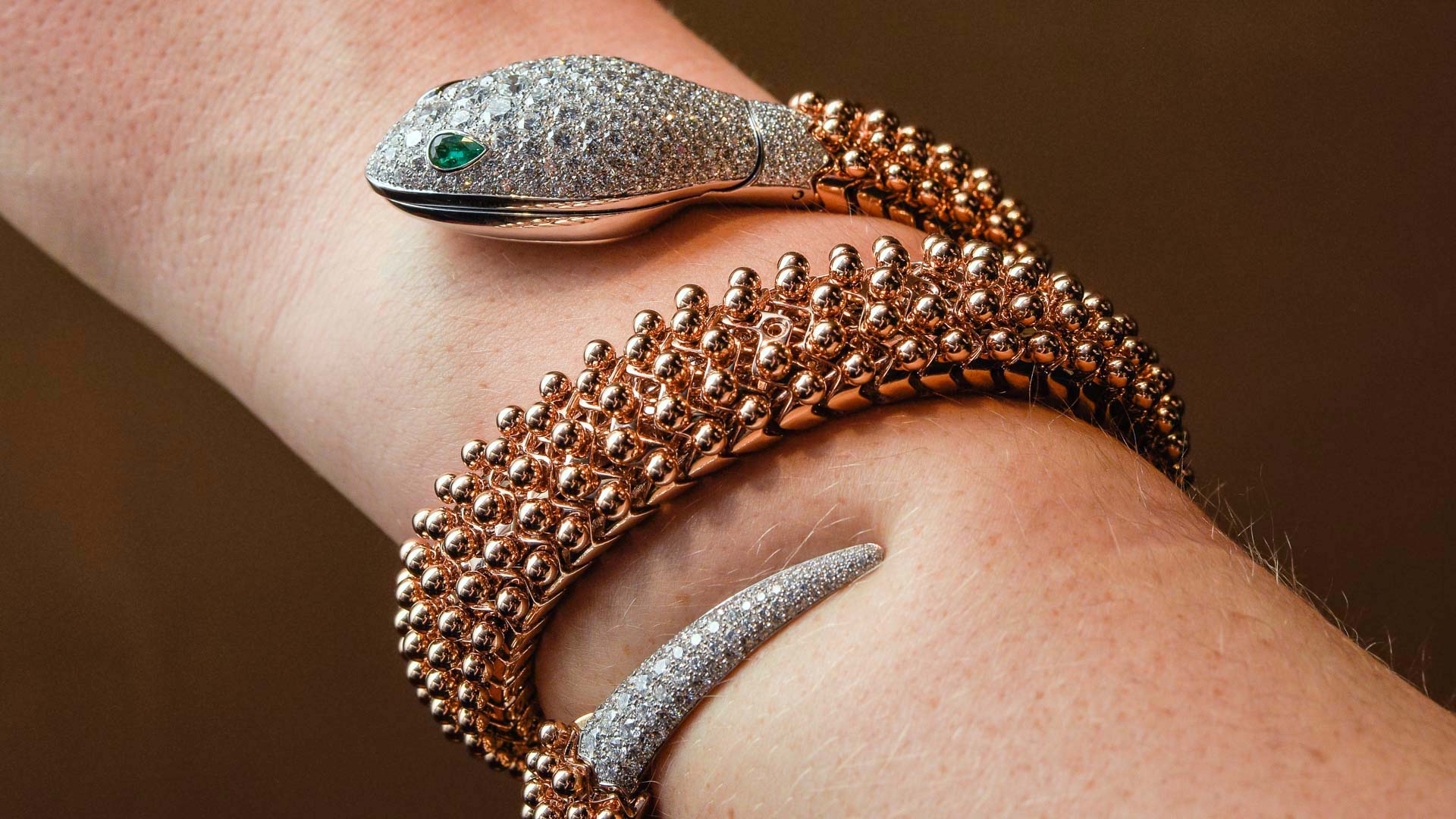 Having produced five “thinnest” world records in four years, Bulgari’s watchmaking division is best known for its record-breaking micro-thin movements. It is, thus, sometimes easy to forget that Bulgari is primarily a jewelry company and, as such, a master of the high-jewelry watch. Founded in 1884 by Sotirio Bulgari, the company has been making watches, including jewelry watches, for decades. The latest Bulgari Serpenti Misteriosi Pallini is typical of the Bulgari style, which is to say it is not typical at all in the world of jewelry watches. The serpent is the main distinguishing feature. It’s a motif that really belongs to Bulgari, whose serpent-themed pieces have been made famous over the years by the likes of Elizabeth Taylor, and more recently, Naomi Watts and Bella Hadid. 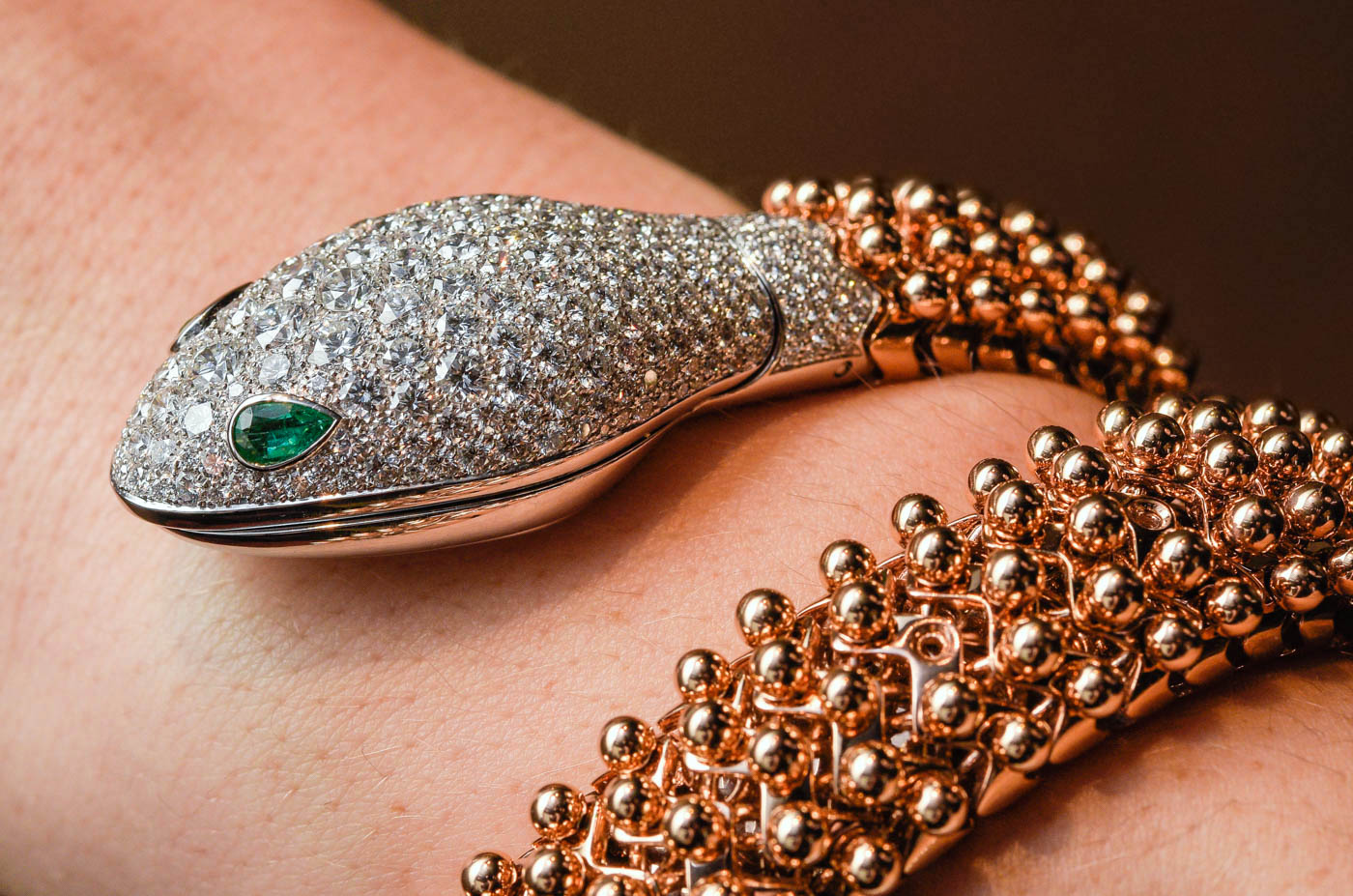 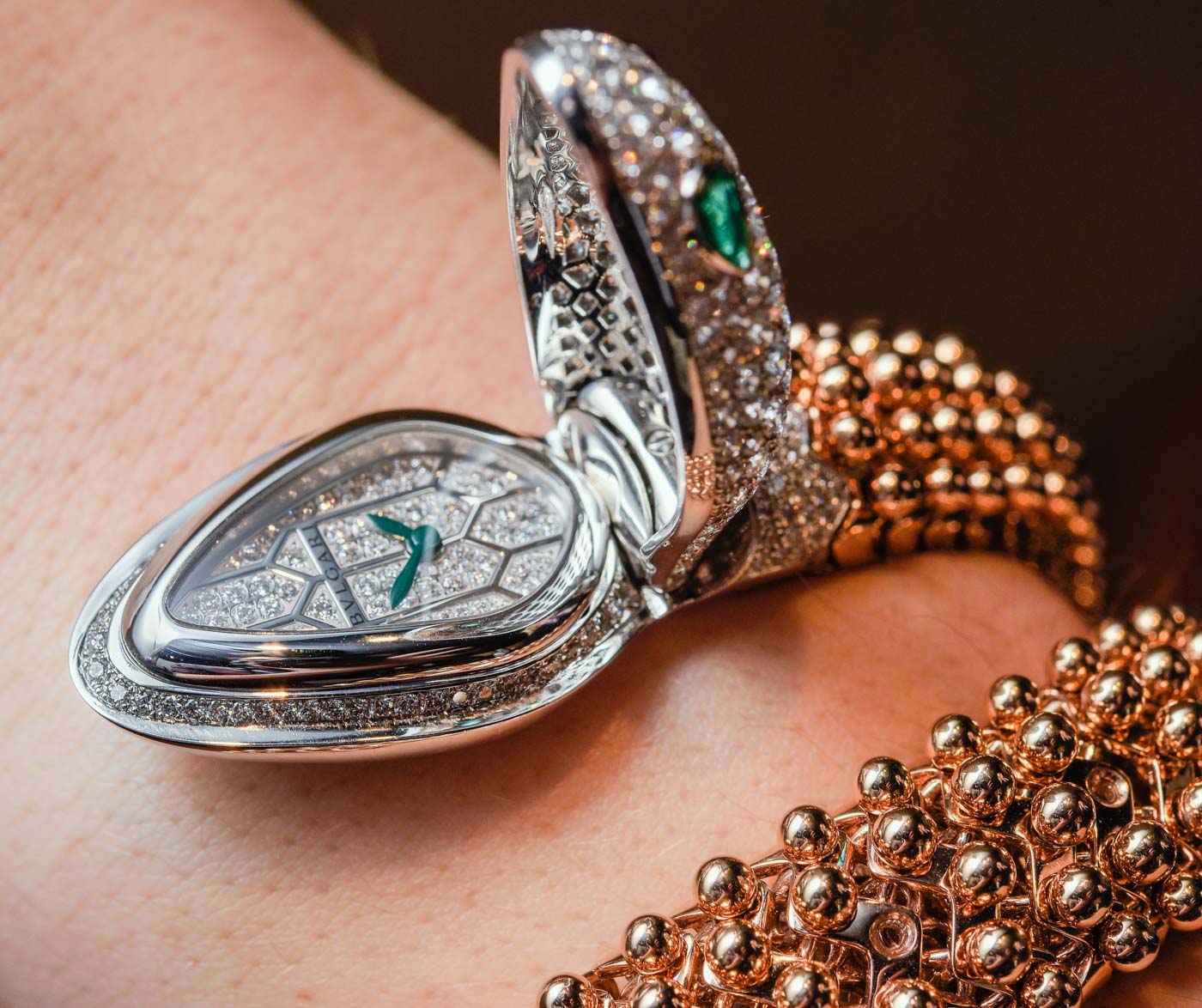 The second distinguishing feature is the sheer creativity and craft involved in the Serpenti jewelry watches. They are not set with diamonds in the way most watch companies use diamonds, by lining them up along the bezel and on the dial. Bulgari’s watches are designed as jewelry first, and produced by a company whose primary expertise is fine jewelry. There is an innate creativity at work in Bulgari’s workshops that eludes most other watch companies. To be fair, most watch brands use top quality diamonds and gemstones — the convention is to use Top Wesselton diamonds, an old-fashioned term that means they are F or G color (which is very white, and VS quality or better), and Bulgari is no exception; it has its own gem-sourcing department in Rome.

Most jewelry watches are also flawlessly set. But there is a difference between precision and creativity, and this is where Bulgari exceeds the norm. Its jewelry watches are designed, set, and constructed in a way that surpasses the imagination. Here, the jewelry watch is transformed it into a serpent that coils around the wrist, with a tail at one end and a head at the other, complete with gaping mouth that serves as the cover of a secret watch. In between head and tail is an articulated, flexible body that, when worn, moves as if a snake were coiled around the wrist. 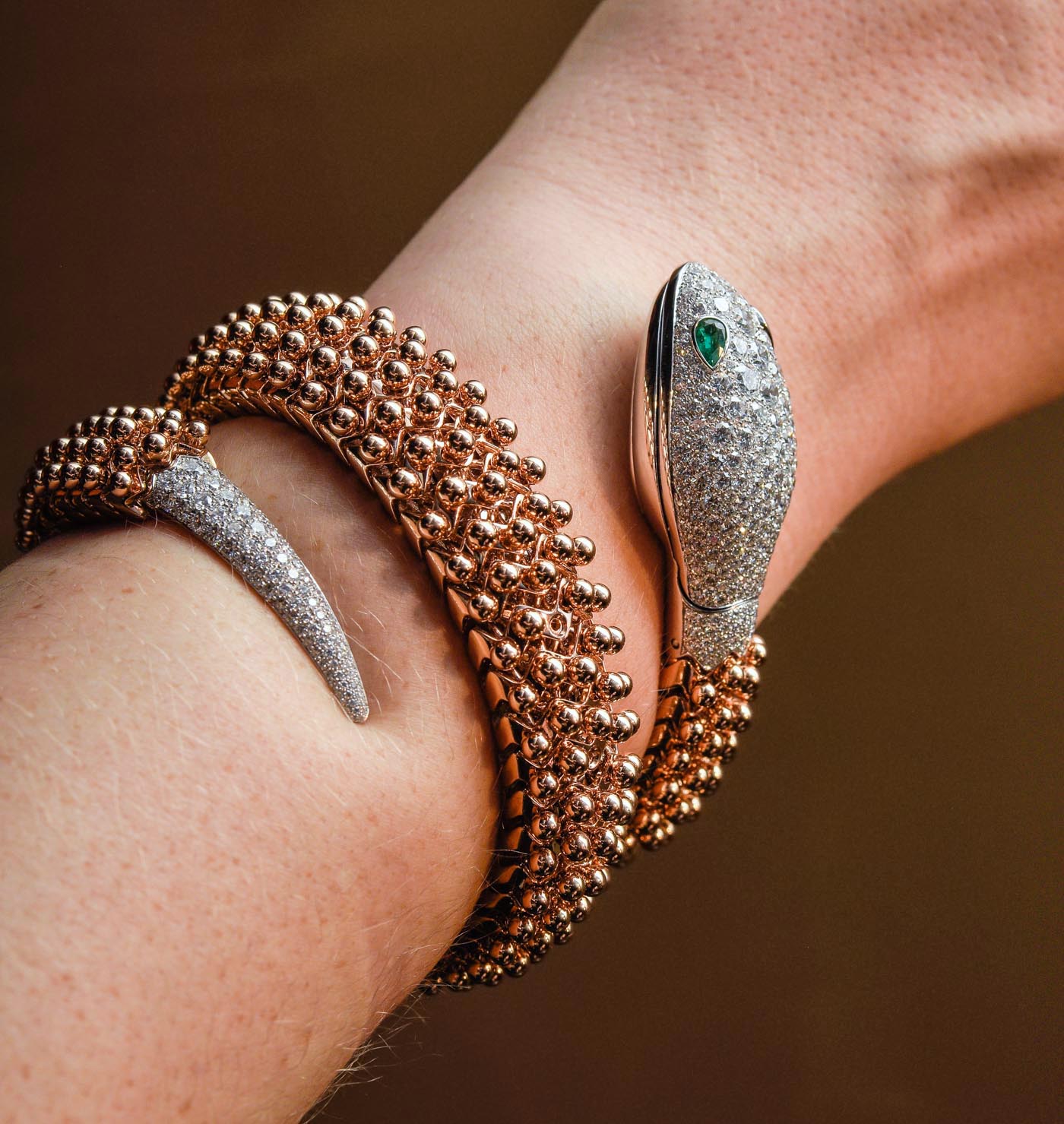 The inspiration for the watch is pure Bulgari in the sense that it emulates the bold, big, and colorful aesthetic that Bulgari created and that set the tone for jewelry in the 1980s. The Bulgari Serpenti Misteriosi Pallini is a nod to this era and its bold style. According to Bulgari, it was “inspired by the cultural revolution and creative excitement of the roaring ’80s, a powerful design that incorporates the seductive charms of the serpent.” The crafts is as impressive as the design. Each link in the articulated bracket is made to fit the link next to it, and all are individually hinged to move with the curve of the wrist. The links are then embellished with gold balls or “pallini” in Italian. Another standout detail is the row of diamonds set along the outside of the dial, which becomes visible when the serpent-head cover is lifted to reveal the watch dial, which is paved with diamonds. Two large pear-shaped emeralds on the head serve as the eyes. The 18k white gold curved case, in the shape of a serpent head, is set with 8.28 carats of round brilliant diamonds. The 18k white gold dial is set with 0.41 carats of round brilliant diamonds. The 18k rose gold bracelet is tipped with a tapered white gold tail, also set with diamonds. 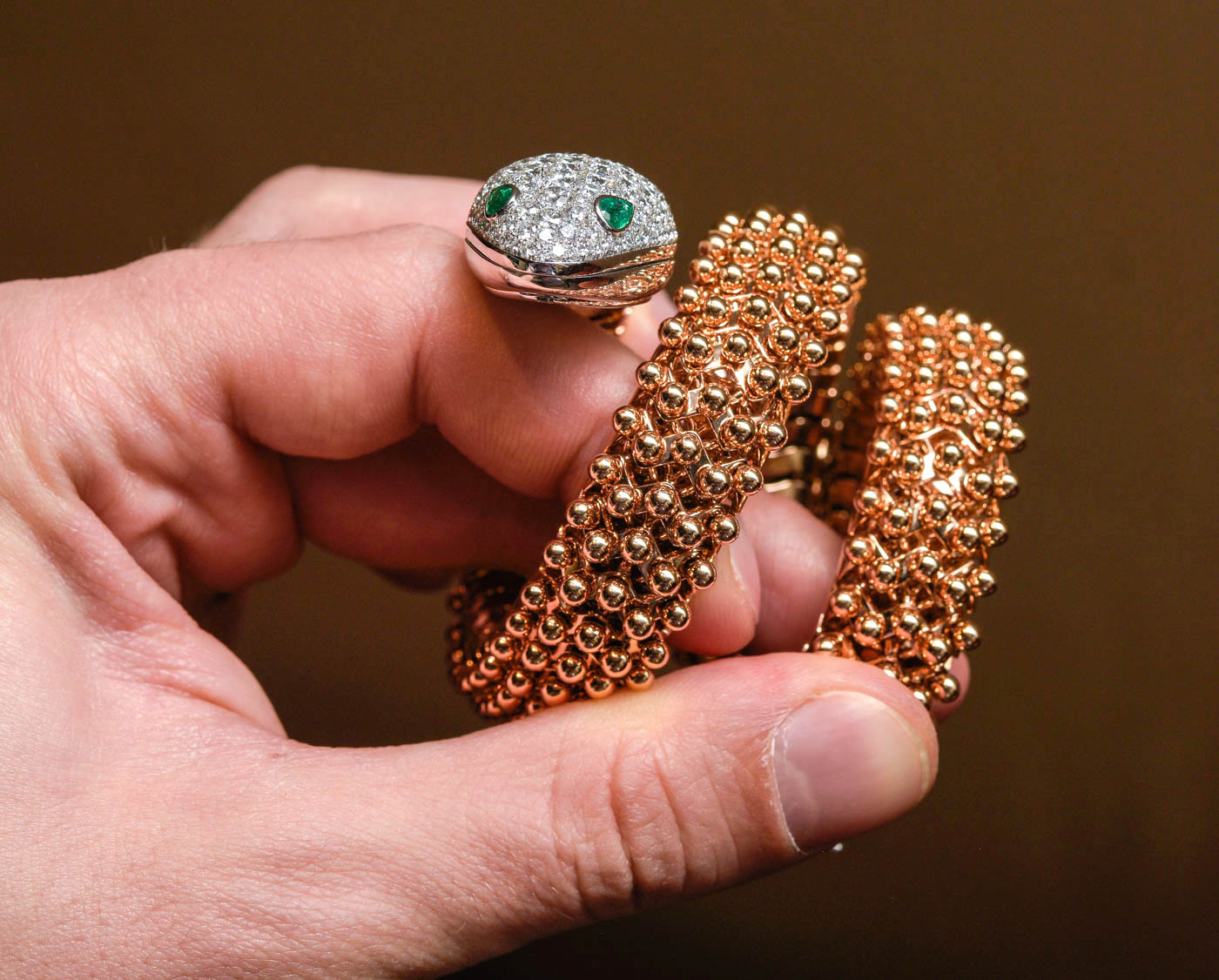 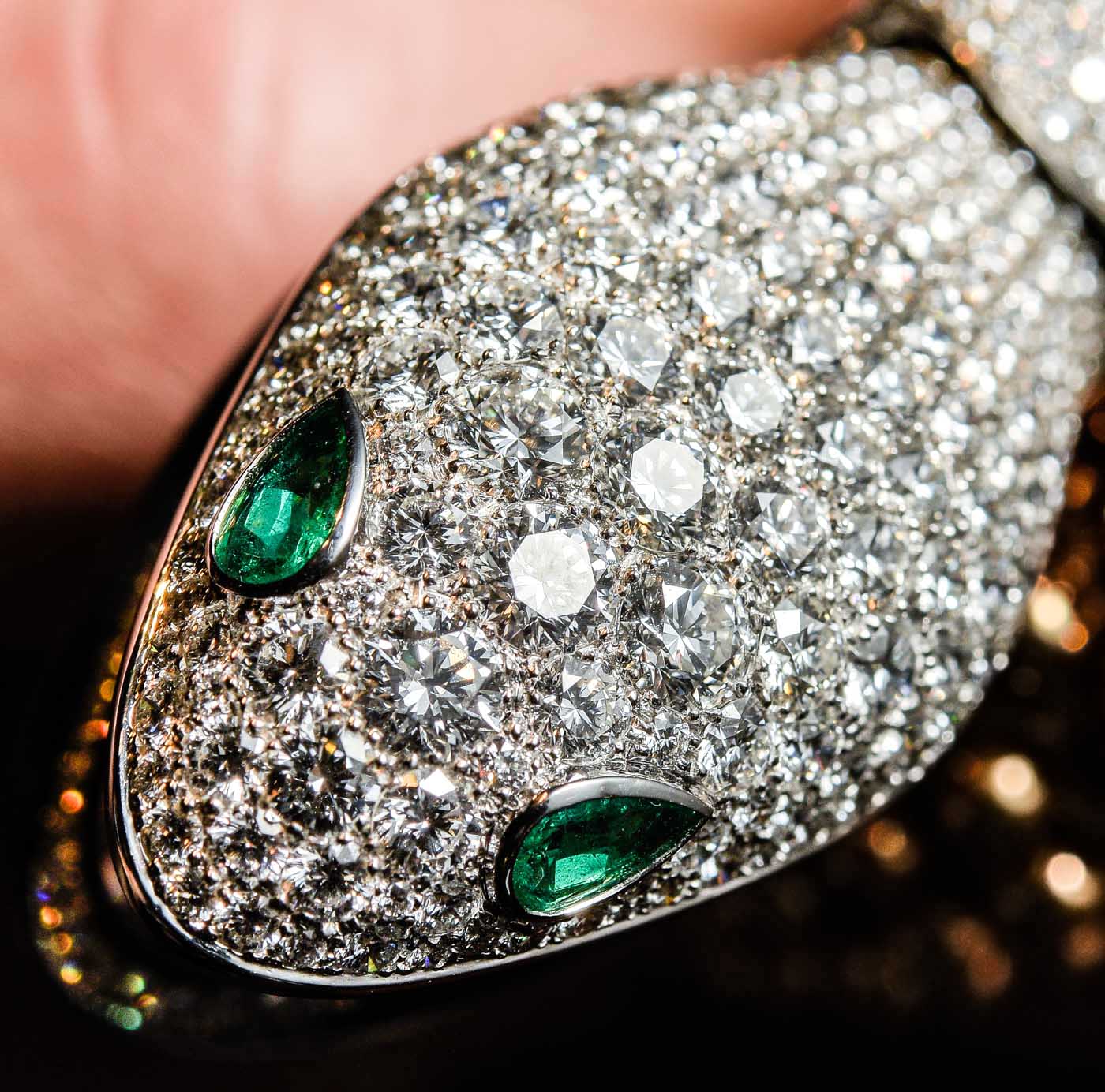 If you’re going to spend money on a diamond watch, it is worthwhile to pay attention to the details, just as you would with a complicated watch. And the Serpenti Misteriosi Pallini has all the right details in all the right places. It is the sort of piece that will hold its value, should you want to sell it at a future auction. Price upon request. You can learn more at bulgari.com