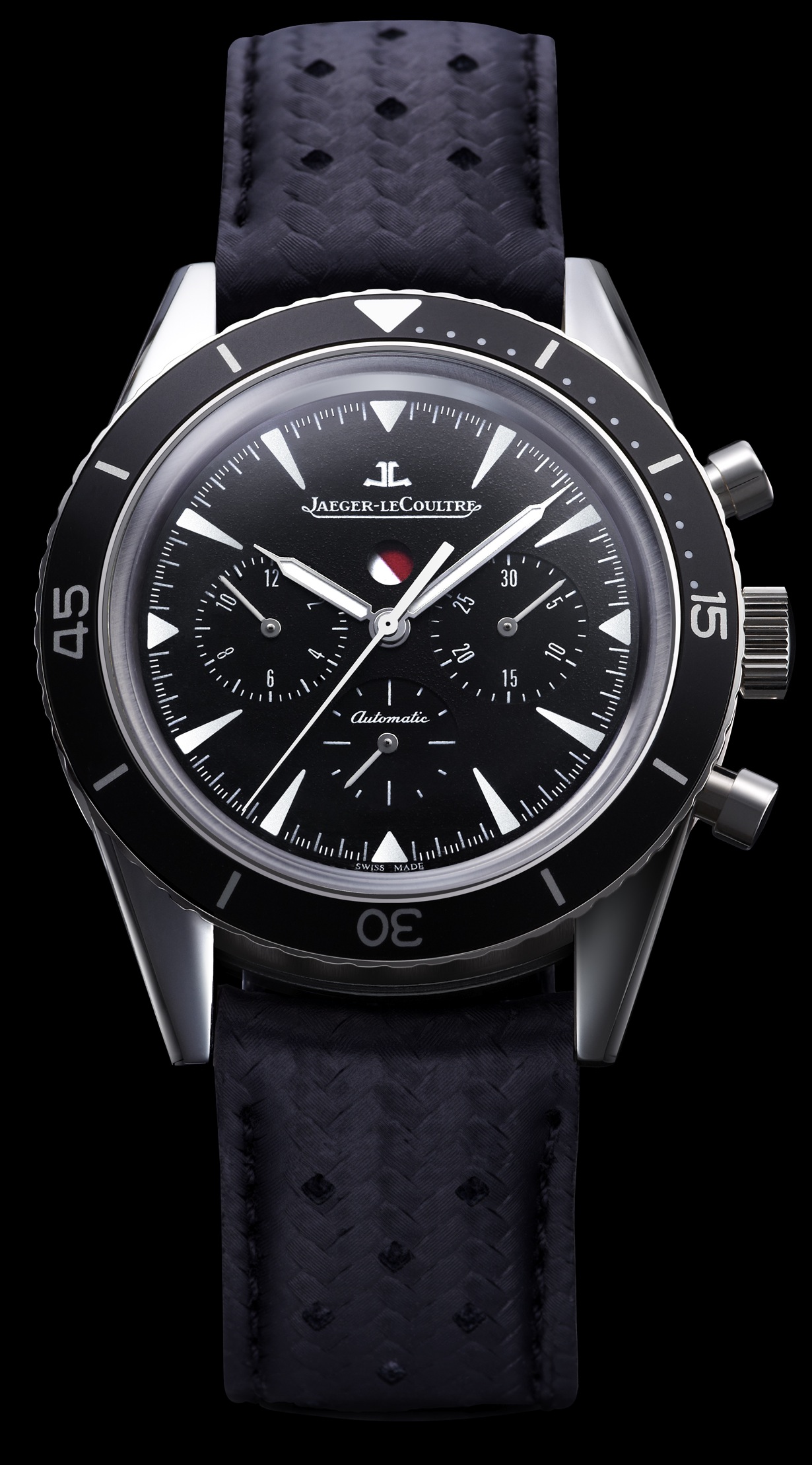 This 42mm dive-ready chronograph features a number of changes over the 40.5 mm Tribute design we saw earlier this year. The vintage lume has thankfully been replaced with crisp white SuperLumiNova, the two register display has been upgraded to to a trio of matched sub dials and the fixed bezel of the vintage-inspired model has been swapped out in favor of an ISO 6425 compliant unidirectional rotating bezel. I find the overall design is reminiscent of the Omega Speedmaster, but that is likely due to its largely monochrome color scheme and piston-style pushers. I am a huge fan of dressy divers so it is of little surprise that I think this new JLC looks great and that I really appreciate a style that makes as much sense while out for dinner as it does while diving. 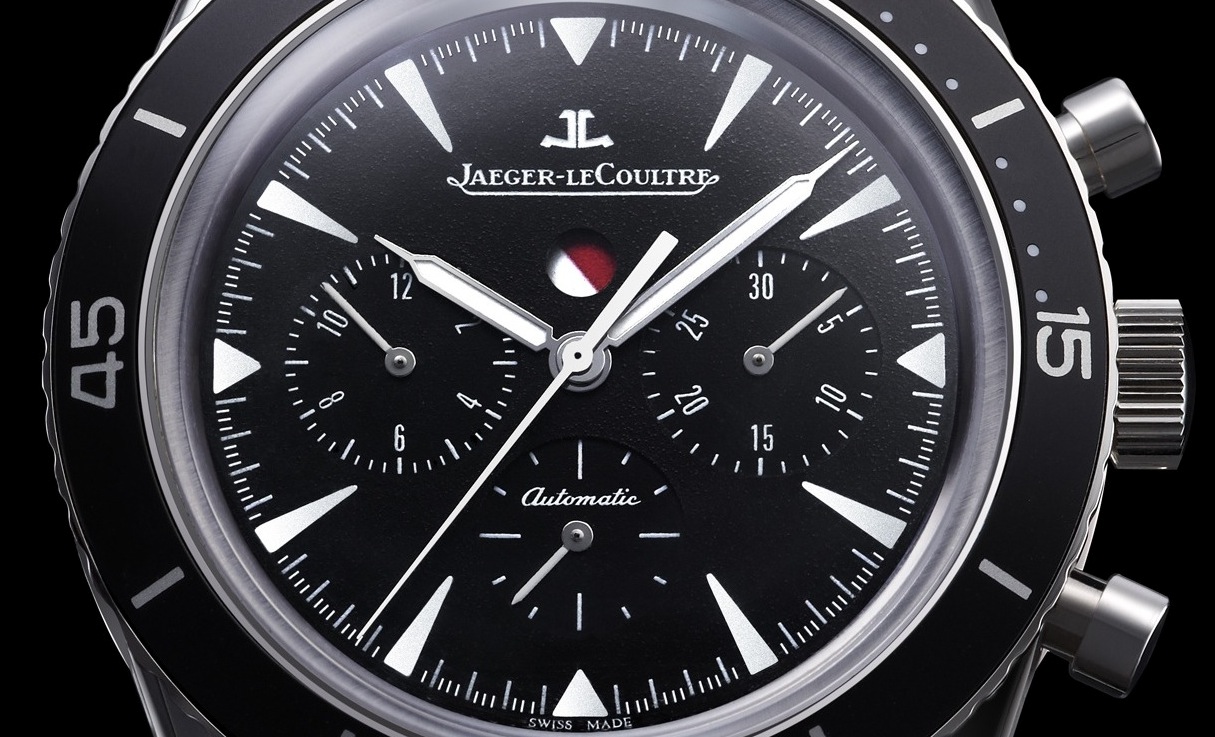 The dial is nicely proportioned and features appropriately sized hands and markers, which should prove to be legible in a variety of conditions. The subdial at three (a 30 minute totalizer) and nine (a 12 hour totalizator) oddly remind me of the gauges seen in old Ford Mustangs and I really like the long hands and almost Bauhaus font used for the numbering. While this is a more modern style than the Tribute version of the Deep Sea, it is still a classic and rather reserved interpretation of the dive chronograph, especially for JLC. I suppose Jaeger-LeCoultre contrasts designs like the Deep Sea Chronograph with the more raucous and complex styling seen in parts of the AMVOX and Master Compressor lines (illustrated below). 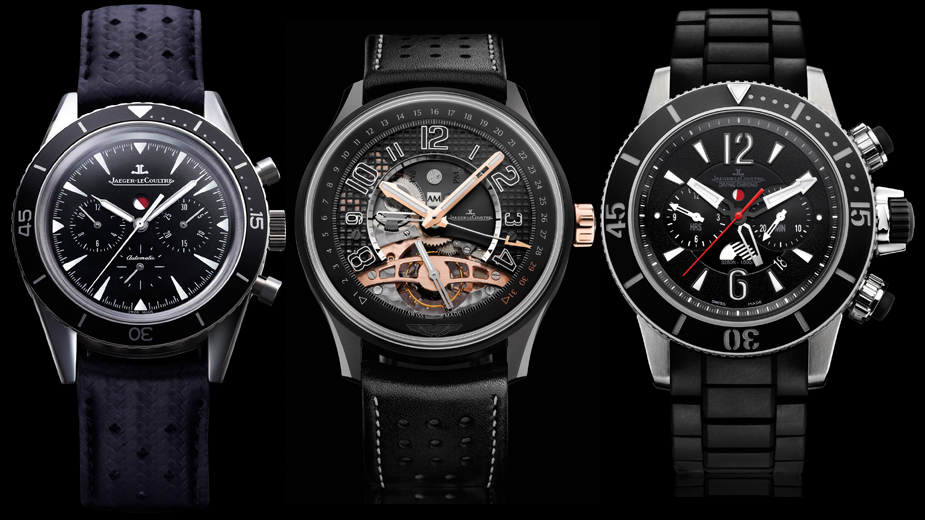 A balanced and reserved style is actually not the Deep Sea Chronograph’s only notable attribute. Just take a closer look at the photos. Below the “Jaeger-LeCoultre” on the dial, there is a small aperture which has three phases depending on the current status of the chronograph – be it idle, running, or paused. When idle, the aperture shows an inconspicuous white circle but this will transition to being white and red while the chronograph is running and a solid red when the measure is paused. Jaeger-LeCoultre calls this a “chronograph operation indicator” and it is essentially a way for a diver to be able to quickly verify that the chronograph is running and timing their dive (or in my case, more likely a French press). I like the simple and crisp white of the idle phase but LOVE the white/red of the running phase, which has no doubt been designed to be reminiscent of a diving flag. 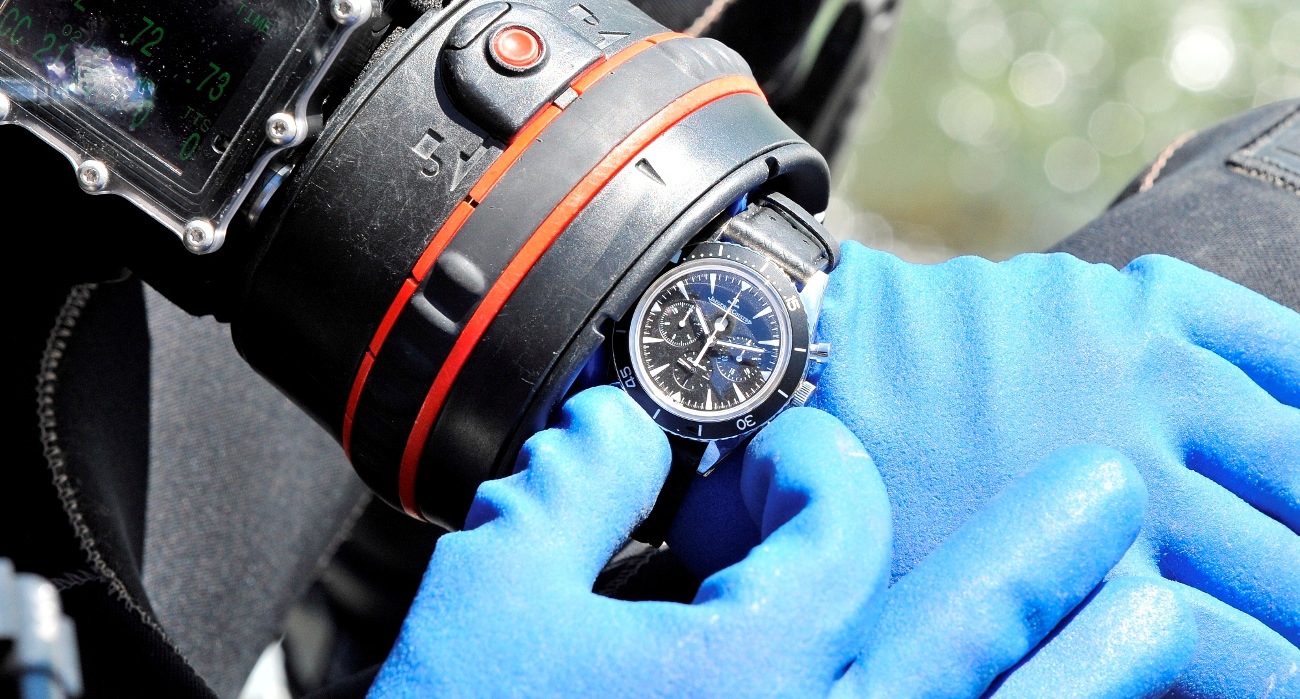 This is an example of simple but thoughtful design which adds a touch of cool to this luxury 100m dive chronograph but manages to do so without compromising its understated aesthetic. I love a complication that is simultaneously cool enough to show your watch nerd buddies and yet nearly invisible to the horologically untrained eye. That said, if I were fortunate enough to own such a watch, it would likely only ever get wet if I fell into a pool, as I don’t posses the fortitude to actually take such a watch diving. As capable as this ten thousand dollar dive chronograph may be, it would certainly only see desk-dive use under my care. 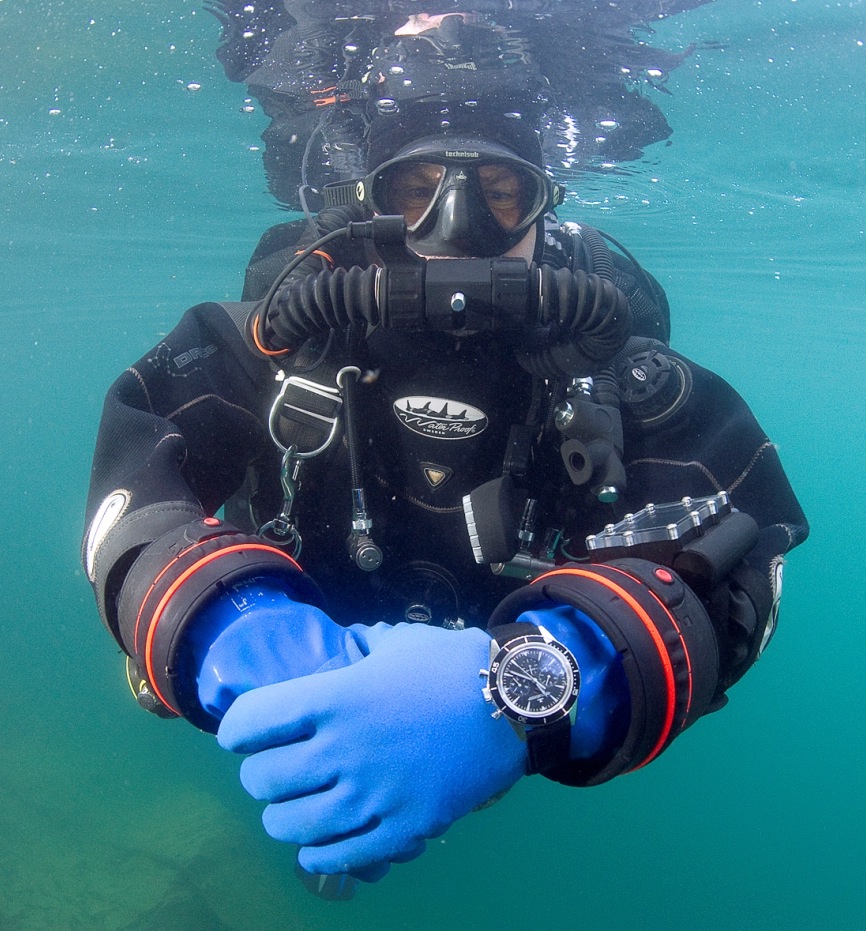 Under the matte black dial beats the Jaeger-LeCoultre in-house calibre 758 which is a 47 jewel automatic movement featuring a 65 hour power reserve. The Deep Sea Chronograph appears to be the only JLC that features this movement and specific style of chronograph operation indicator. The Jaeger-LeCoultre Master Compressor Diving Geographic Navy Seals features a similar aperture, but it is used as an am/pm indicator as opposed to a chronograph operation indicator. 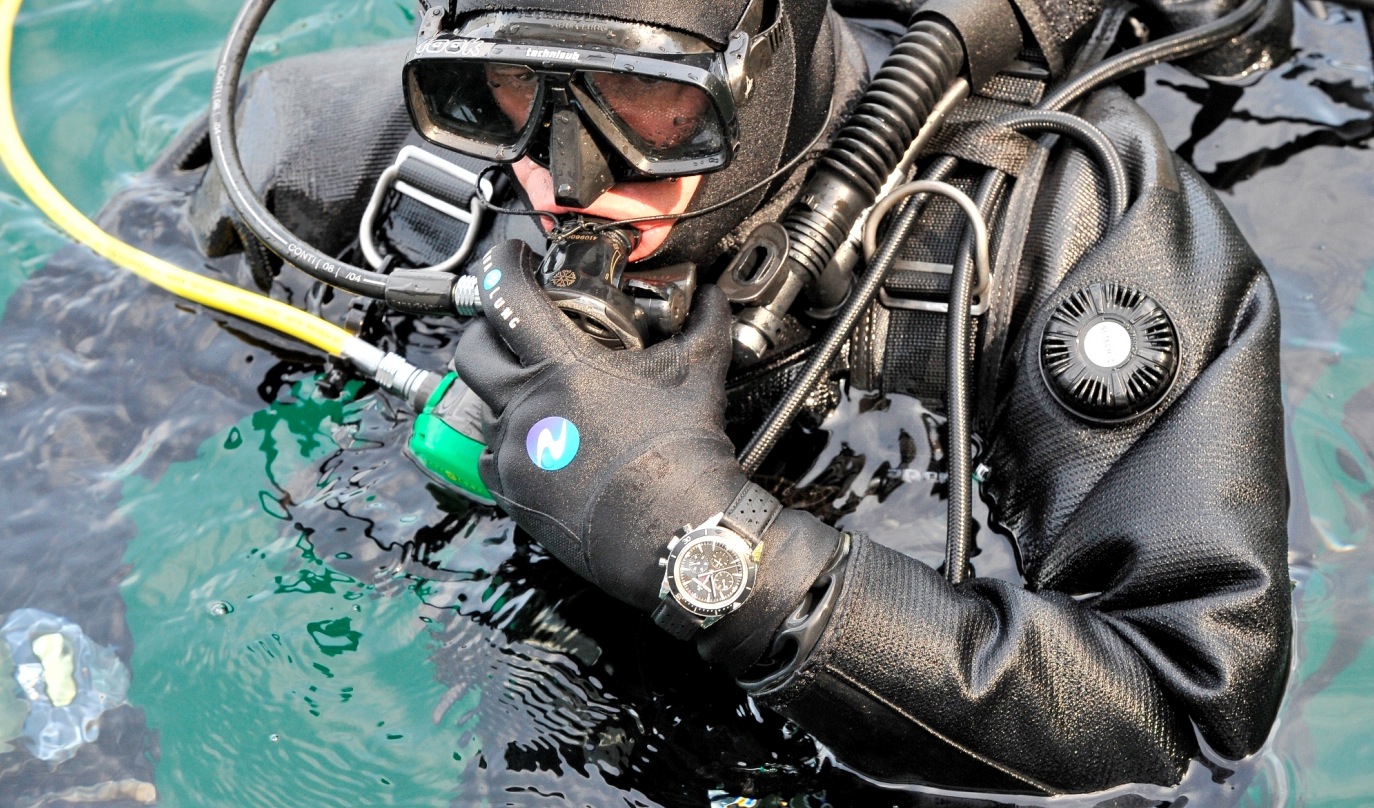 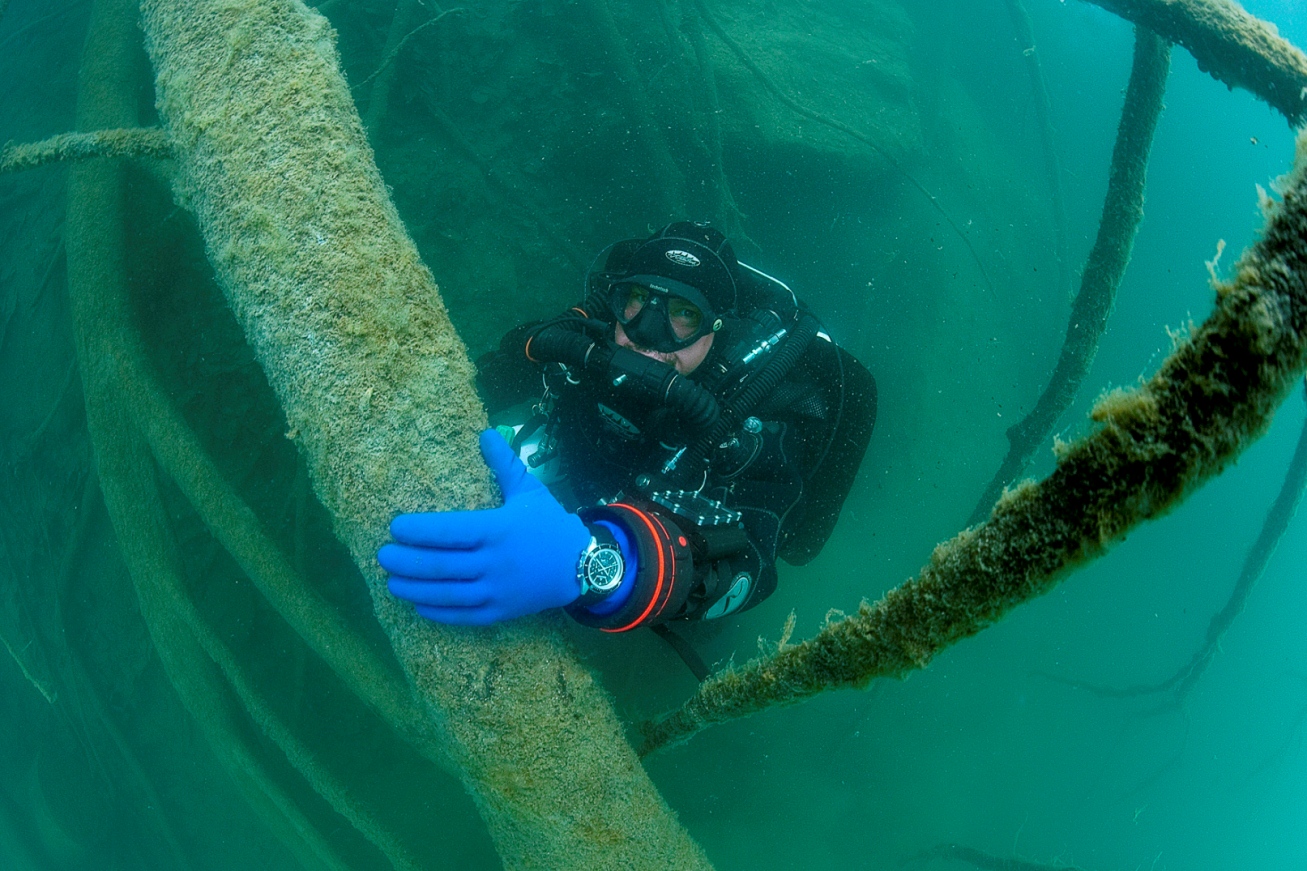 This version of the Deep Sea Chronograph does a lot that I love, it forgoes the Tribute vibe but instead makes for a more compelling and likely more timeless design as its not so heavily anchored in the past or reflective of the current trends. It would have been nice for buyers to at least have the option of a bracelet, although one could argue that a bracelet should be included, given the price tag of $10, 800 USD. Considering Jaeger-LeCoultre’s stance as a top tier manufacture, the Deep Sea Chronograph is a fitting addition to their line up that combines everyday wearability with a dive-ready and practical feature set. What’s not to like?

[Editor’s note: Nice restrained design all around making for a good daily wear. Shows the flexibility of the JLC brand offering modern and vintage inspired watches with ease. Though, pictures of a vintage inspired watch on a super-modern diver are ironic, to say the least. Let’s wear this watch couch surfing instead.]