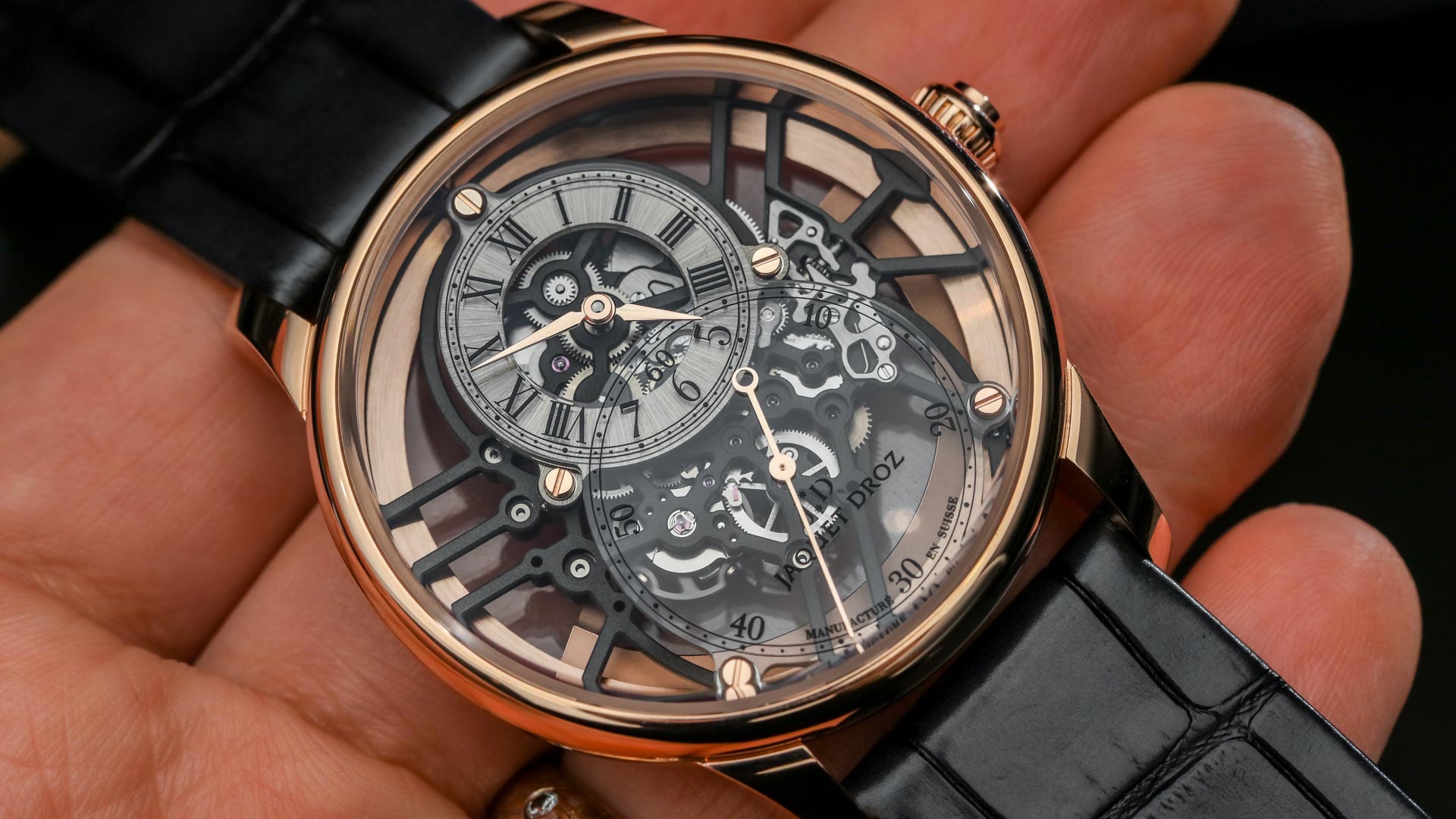 The Jaquet Droz Grande Seconde is arguably the brand’s most recognizable collection. With its oversized subsidiary seconds dial at 6 o’clock and its smaller off-center dial showing the hours and minutes at 12 o’clock, this dial layout is unique to the brand and nothing exactly like it is seen elsewhere in the watch world. And over time, Jaquet Droz has introduced new variants to the collection including a moon phase, dual time, tourbillon, and even a “tropical bird” minute repeater. The only thing missing was a skeletonized version and that’s exactly what we got this year with the Jaquet Droz Grande Second Skelet-One. 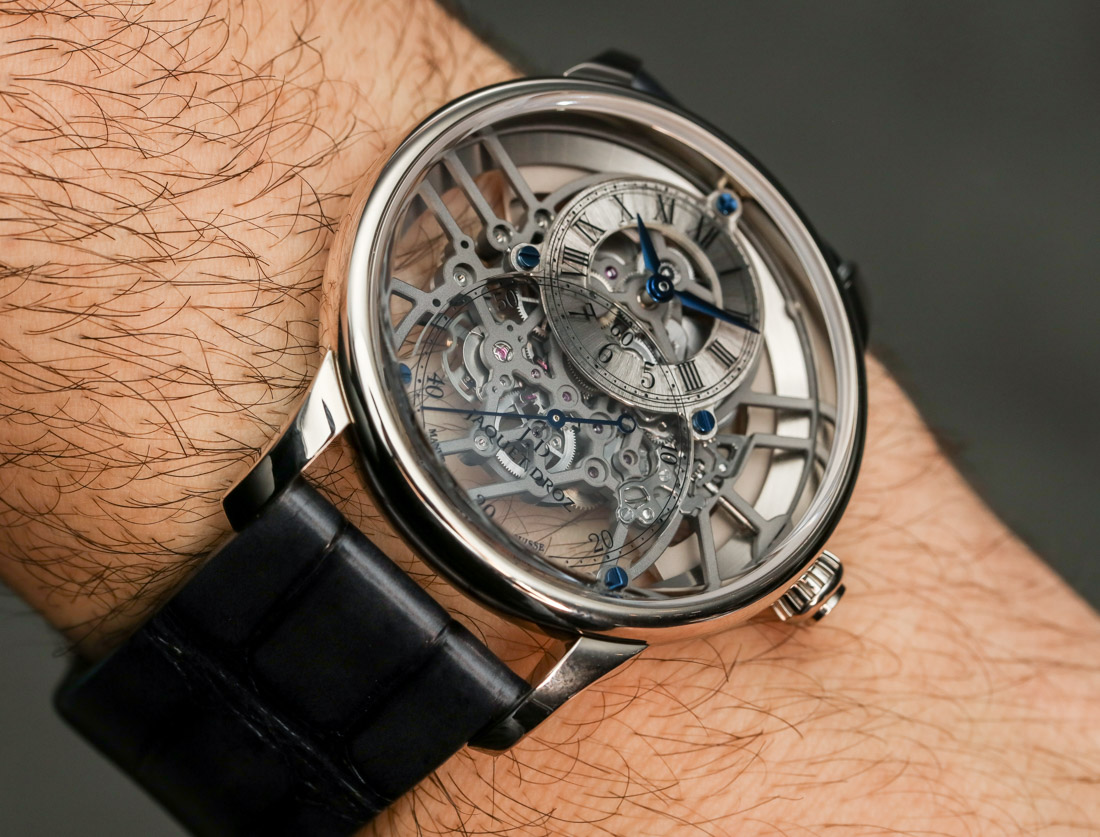 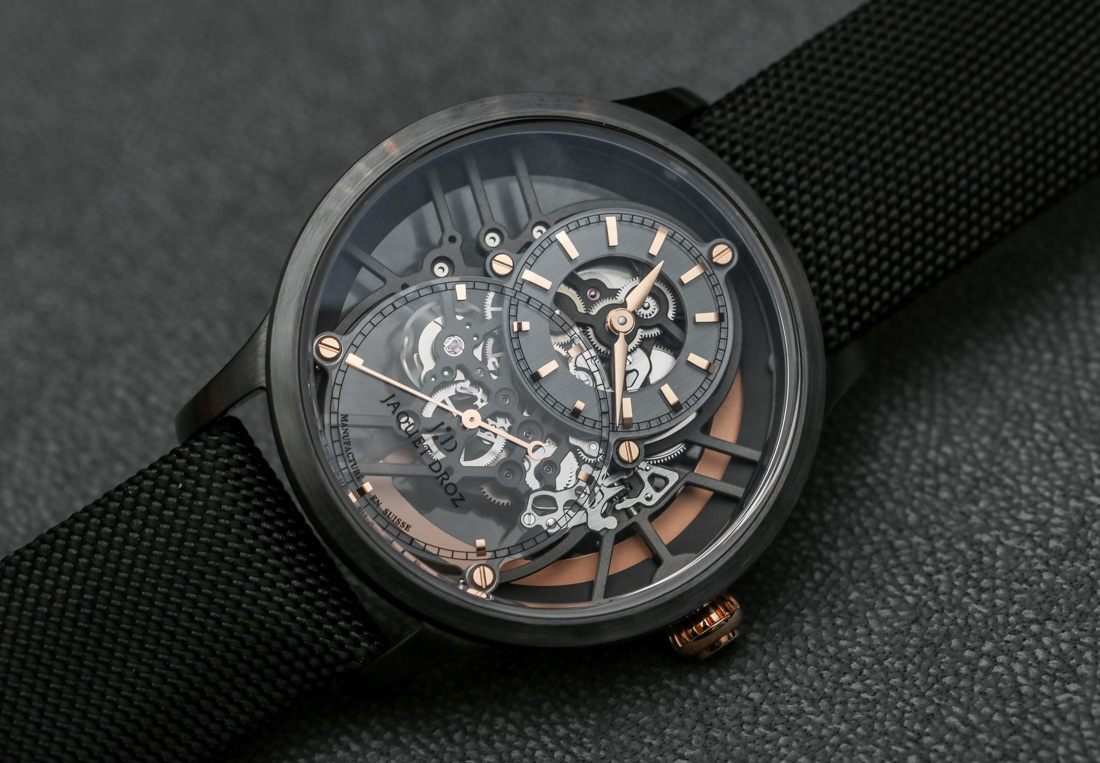 The brand introduced three variants of the Jaquet Droz Grande Second Skelet-One: red gold, white gold, and ceramic. There are slight differences between the three apart from case material, with the ceramic version standing out the most, so I will talk about that last. The red and white gold versions of the Grande Second Skelet-One come in cases measuring 41mm wide with a thickness of 12.3mm. Not huge watches, particularly, but coupled with their expansive dials, they command a lot of wrist presence. The fairly long curved lugs and the pliable hand-made alligator leather straps help with wearing comfort. Water resistance is just 30 meters, which is typical for such watches, but whoever would go for a swim wearing this kind of watch probably wouldn’t care. 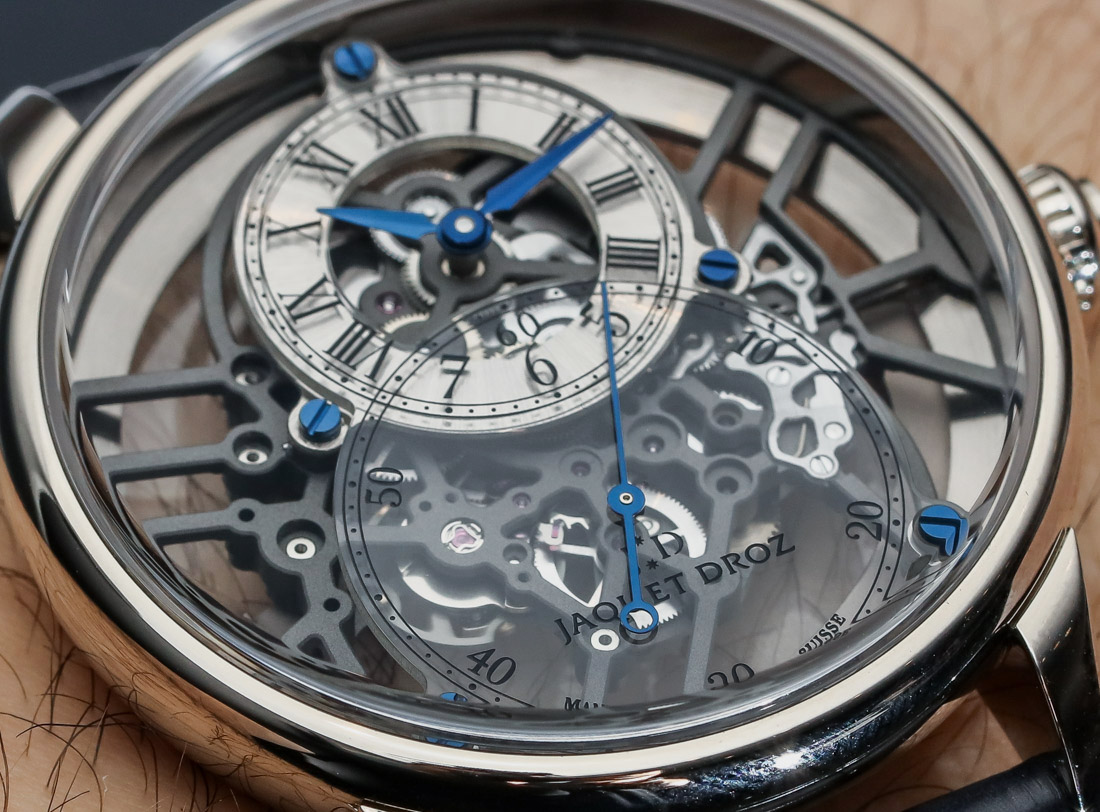 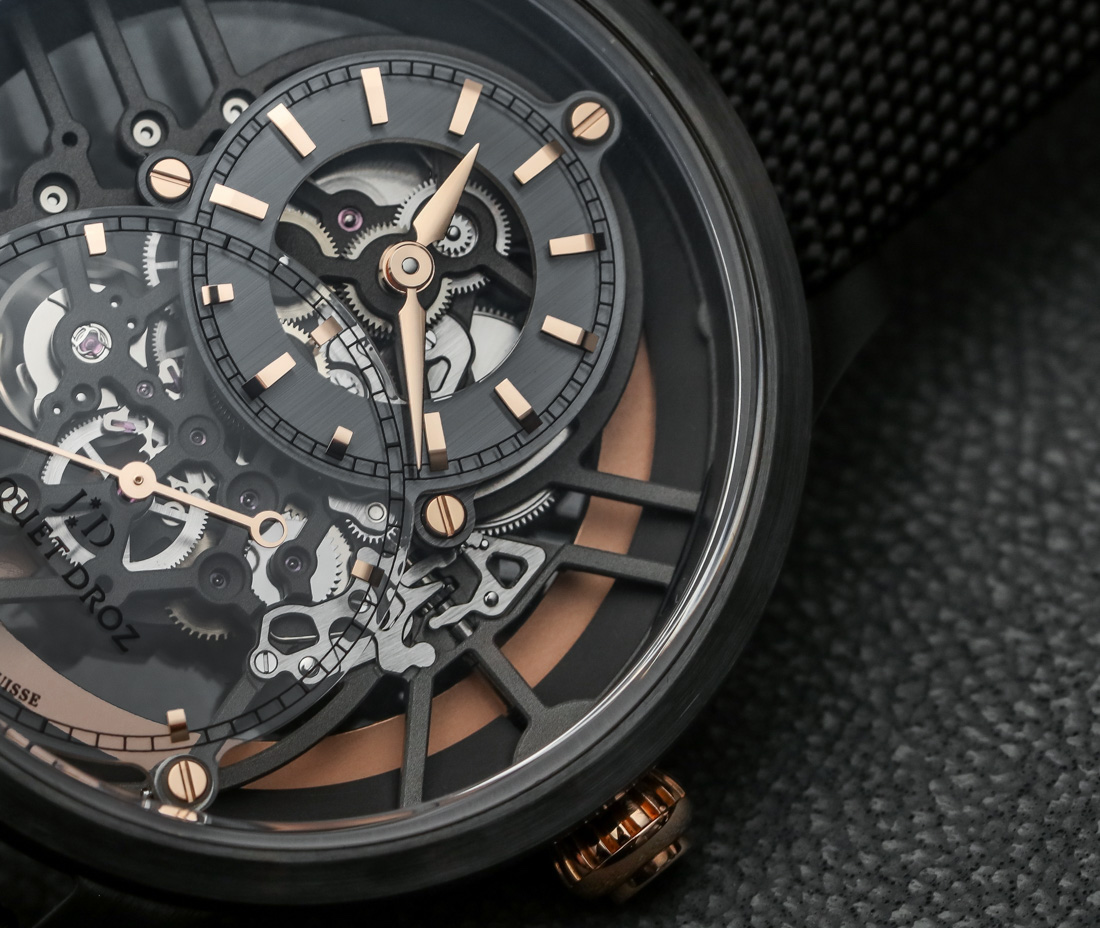 The sapphire crystal extends almost to the very edge of the case so the Jaquet Droz Grande Second Skelet-One doesn’t really have a bezel. This also has the added effect of making the dial look even bigger. The two subdials are made out of sapphire, and to ensure legibility – which is always a big challenge with skeletonized watches – the hour and minutes section sits on a base of 18k white gold and is marked by a mix of Roman and Arabic numerals. What’s really interesting is that the two dials are held in place by five specially positioned screws with a fixed orientation. Often times, people complain that screws in a watch are haphazardly aligned. Well, Jaquet Droz shows that aligned screws are possible if you put in the effort. To further enhance legibility, the red gold version of the Jaquet Droz Grande Second Skelet-One features matching red gold hands and red gold screws. The white gold model, on the other hand, has blued steel hands and blued screws. 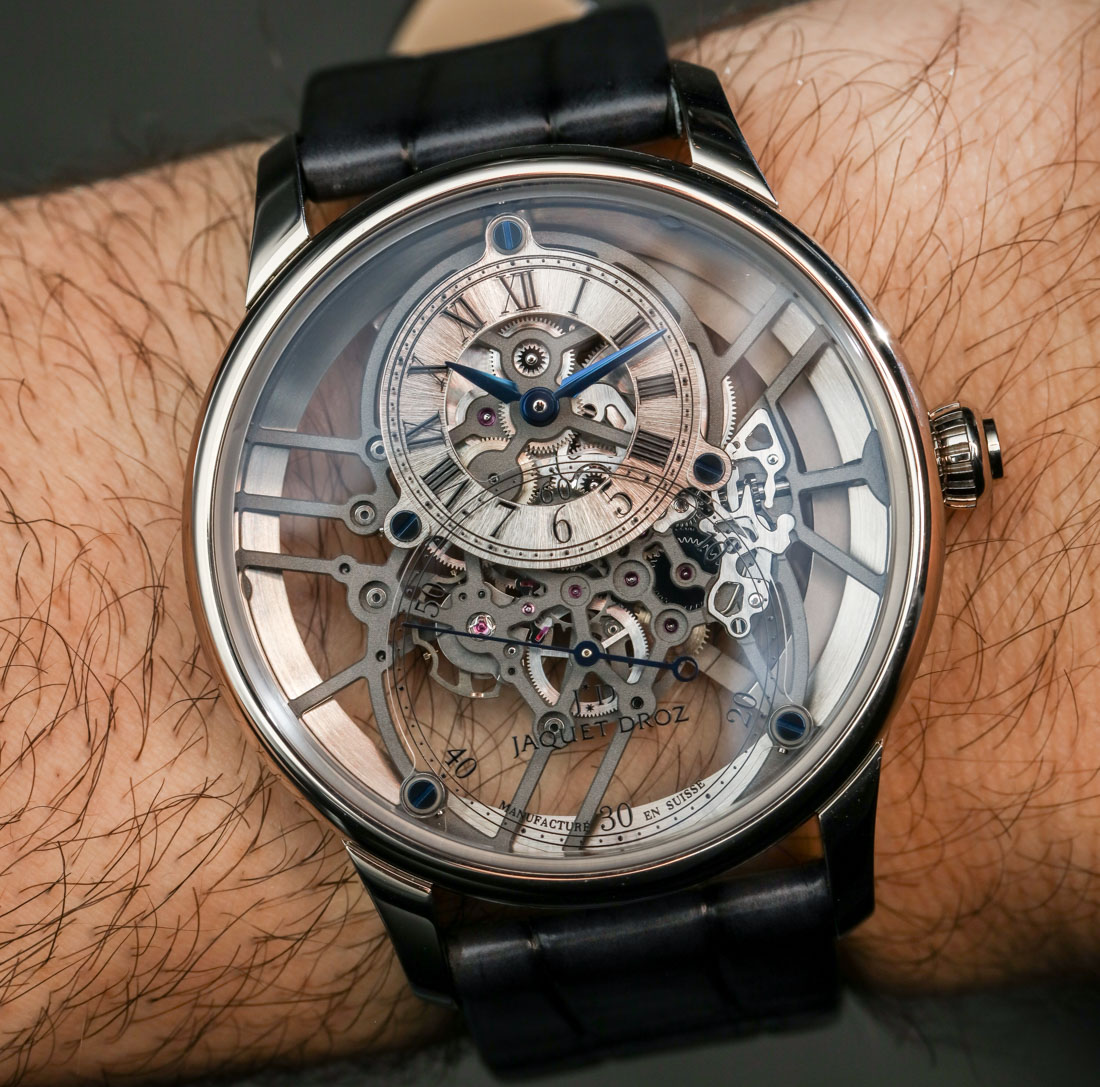 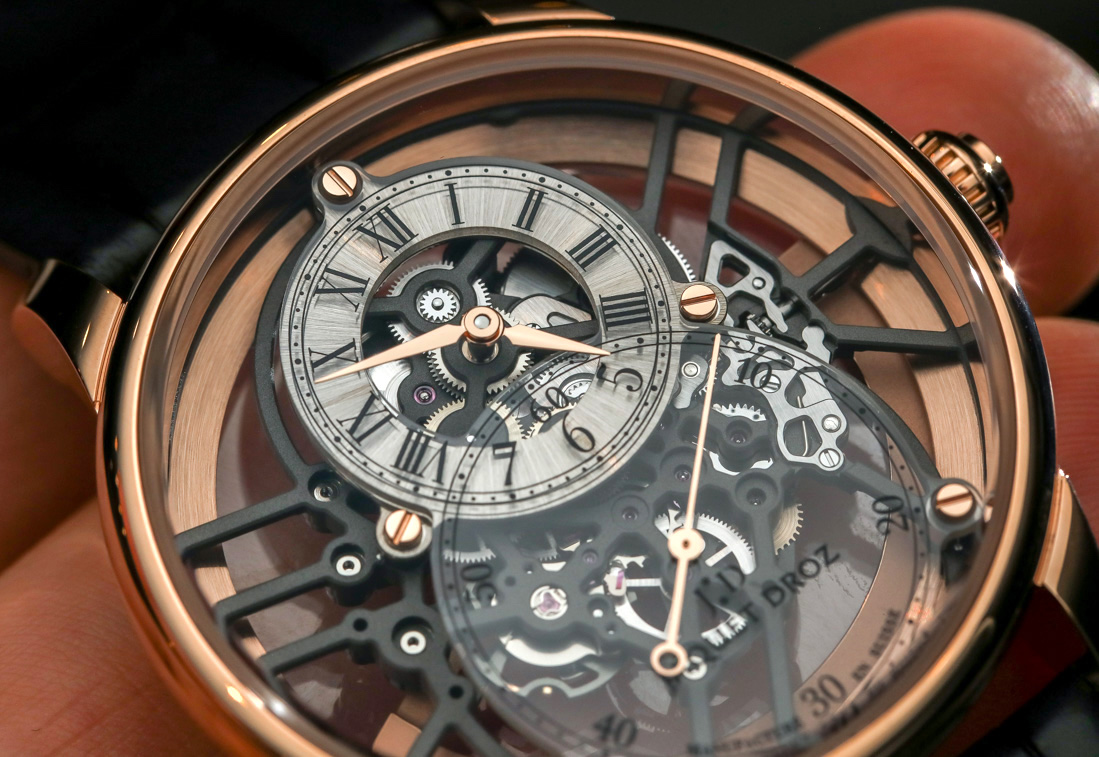 Despite all the effort by the brand to make the time easy to read, the Jaquet Droz Grande Second Skelet-One isn’t actually that legible. There’s still too little contrast between the hands and the dial. The seconds, in particular, is very hard to tell because the sapphire disc is so expansive and the seconds hand itself is so fine. The flip side, of course, is that you can clearly see the movement ticking underneath. 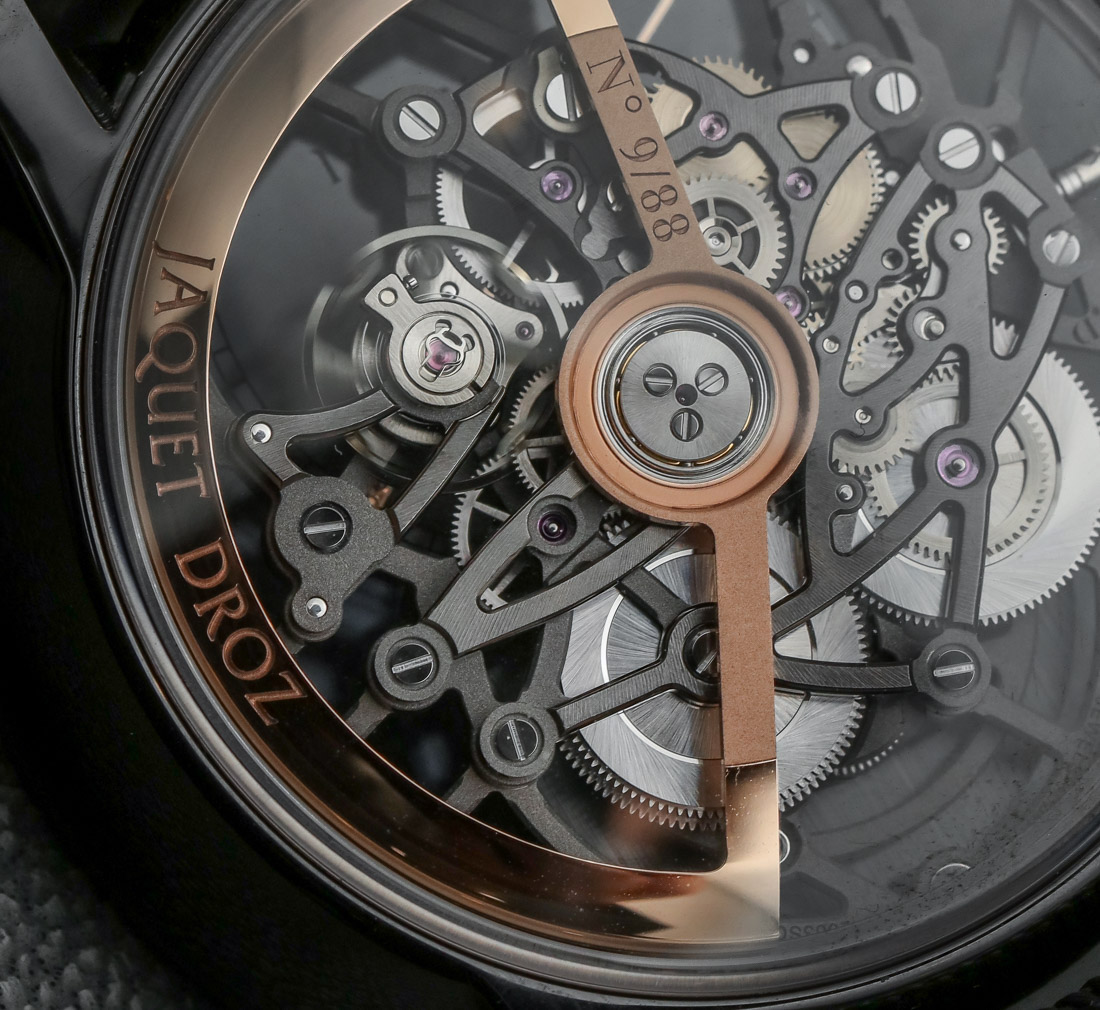 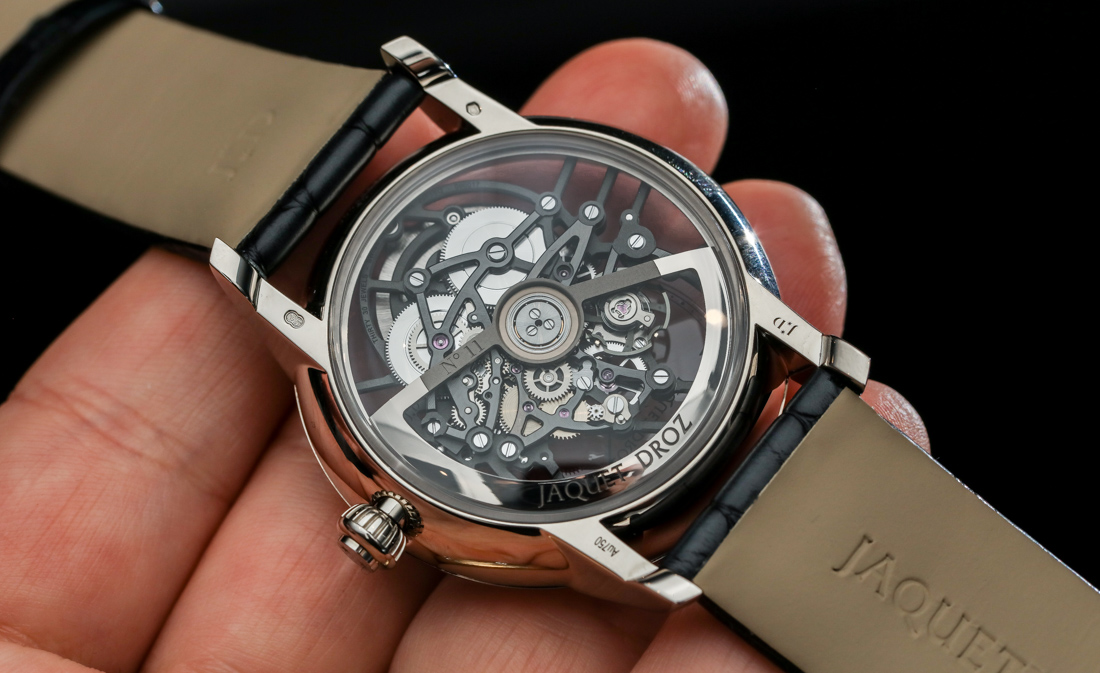 The movement is the Jaquet Droz caliber 2663 SQ, a self-winding movement that has a silicon balance spring and pallet horns, beats at 4Hz, and has a power reserve of around 68 hours. The bridges are heavily skeletonized and extend from the center of the watch like a spider web. Again, to provide contrast, the bridges are treated to have a sandblasted grey finish. One neat thing about the watch is the rotor, which is made out of matching 18k gold and is intentionally open-worked so that it doesn’t impinge the owner’s view of the movement. 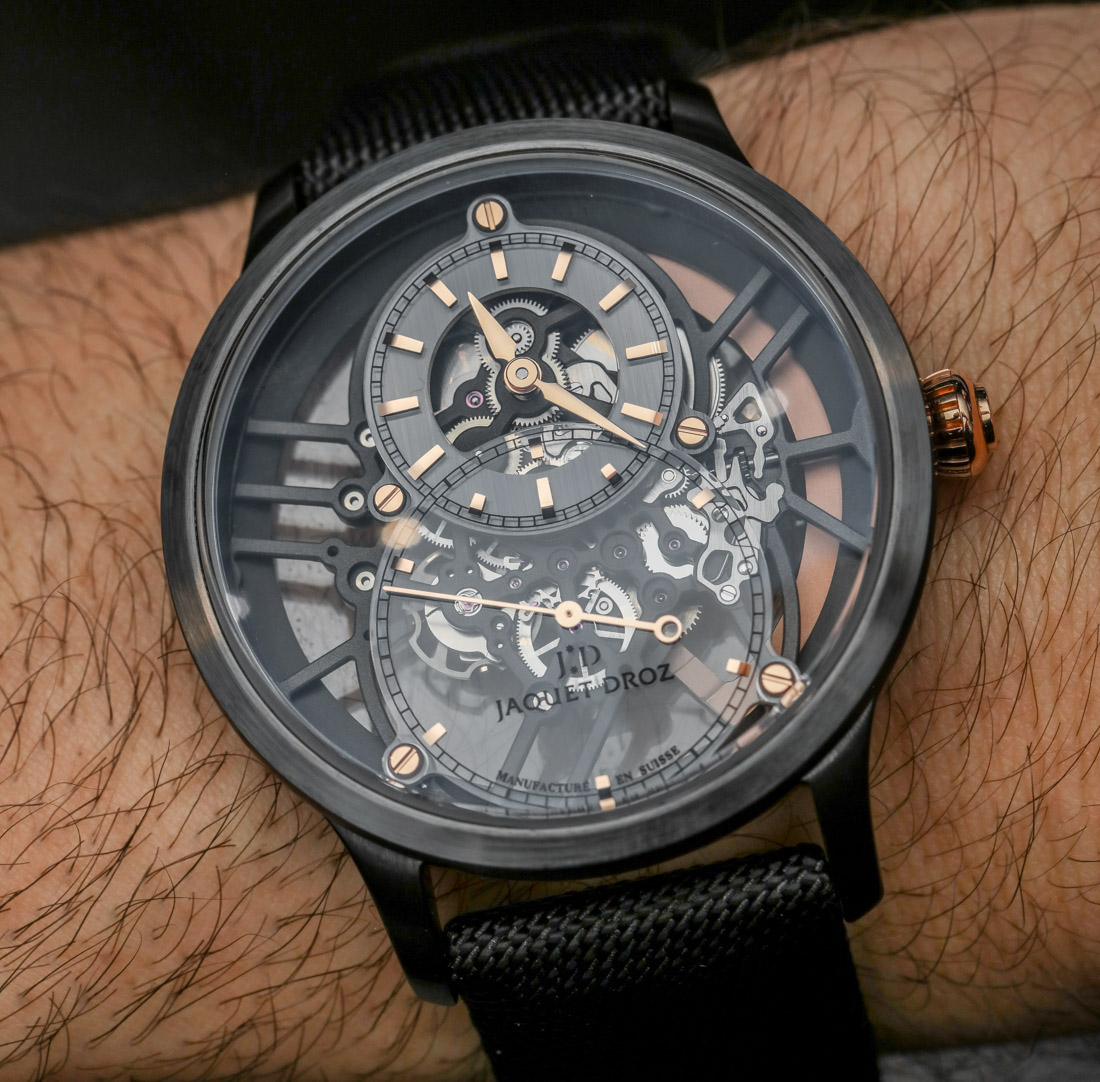 The ceramic version of the Jaquet Droz Grande Second Skelet-One is also powered by the same movement but differs in a few ways. The case is every so slightly larger, measuring 41.5mm across and 12.48mm in height. Next, the dial for the hour and minutes sits on a black ceramic ring and features applied hour markers in red gold instead of Roman numerals. The five screws that secure the subdials in place are also specially aligned and are made out of red gold to match the hour markers. 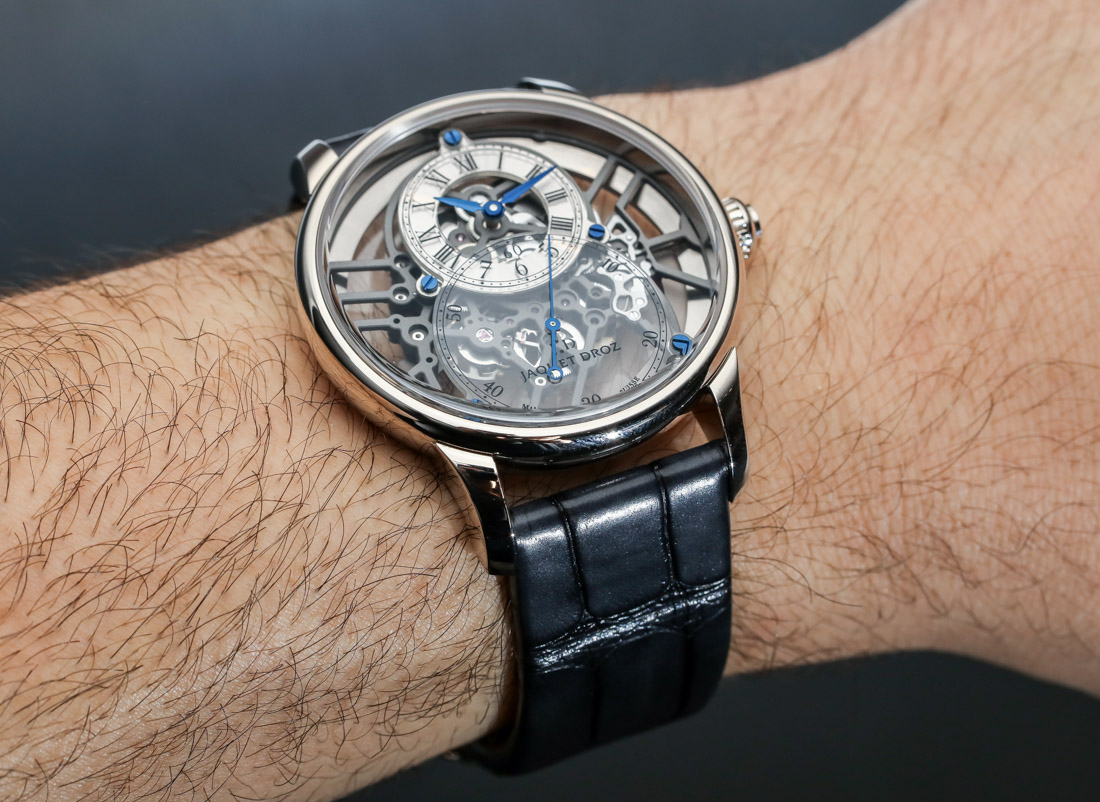