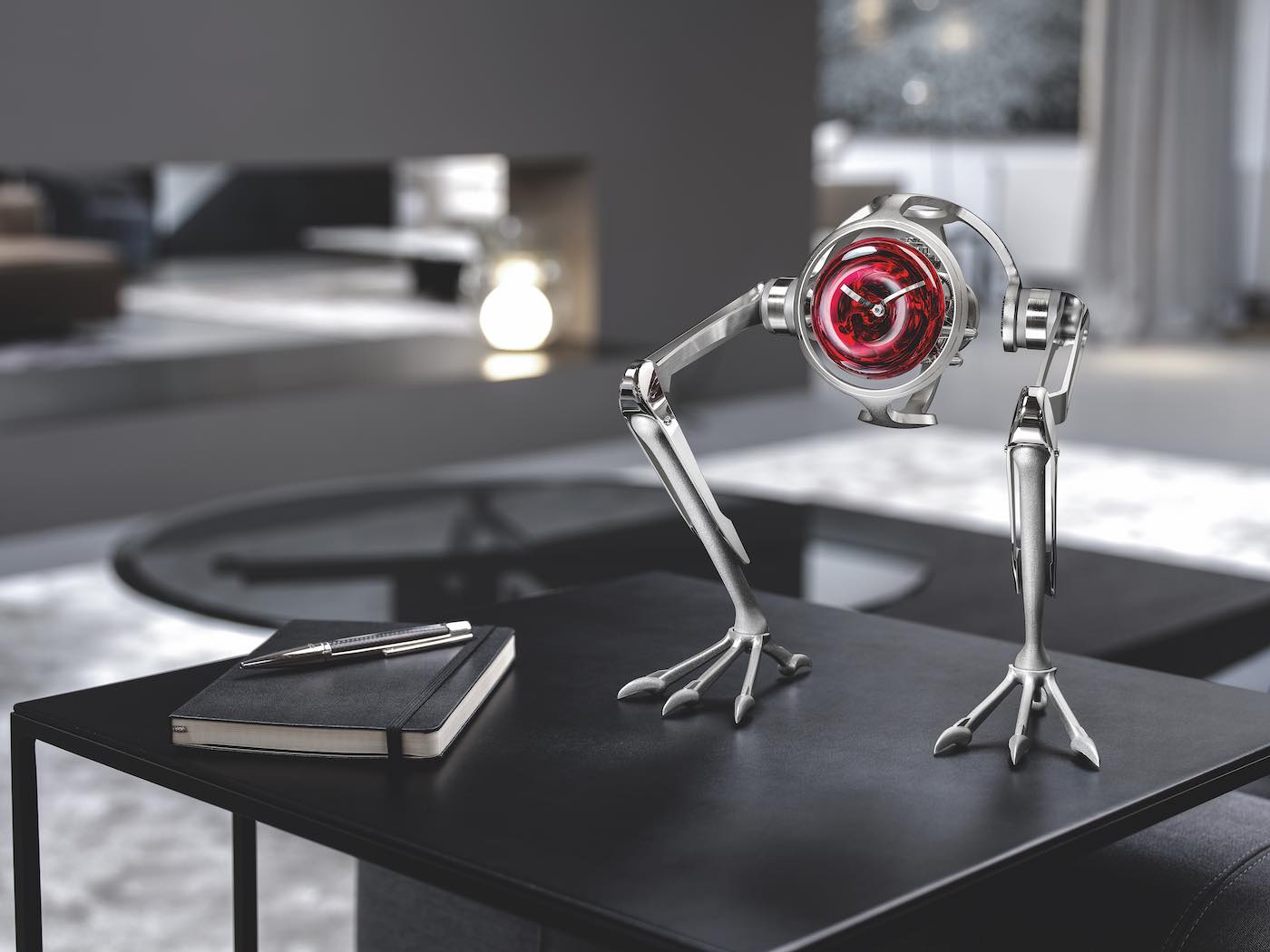 For anyone who followed our coverage of the Only Watch Auction releases, this new piece from MB&F may evoke a sense of déjà vu, and quite rightly so. The MB&F T-Rex is the brand’s 11th collaboration with Swiss clockmaker L’Épée 1839. 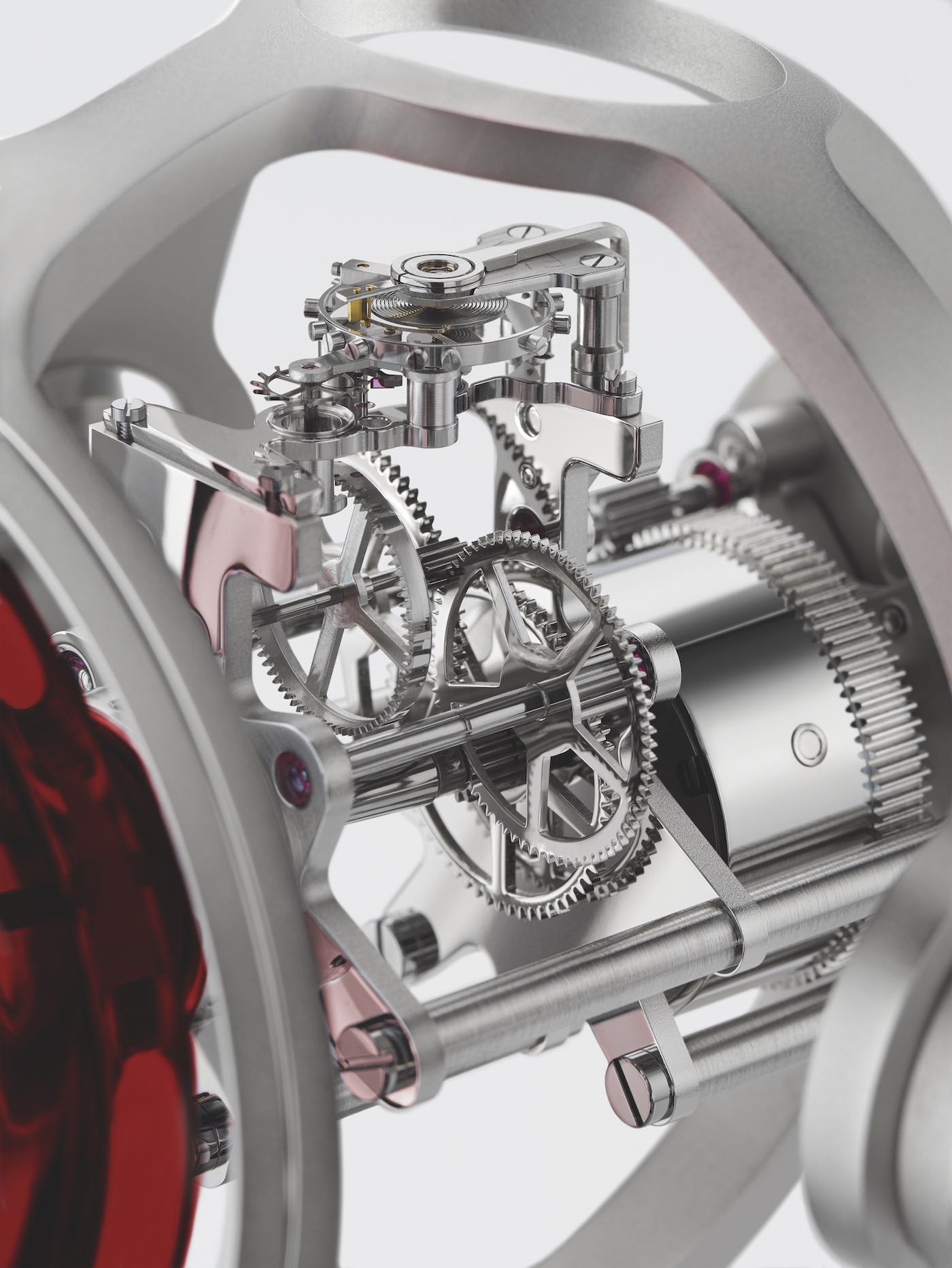 The concept doesn’t need much in the way of explanation, but at the risk of pointing out the obvious, what we have here is a small clock face made from colored Murano glass and steel, suspended between two articulated legs. The reptilian base gives the clock its name and a sure footing. At 26.5cm-tall, the T-Rex clock is hard to miss. Polished and sand-blasted surfaces engagingly interact with light, giving a sense of movement and life. Luckily, though, thanks to its weight (2kg) it is unlikely this clock will be moving unintentionally any time soon. 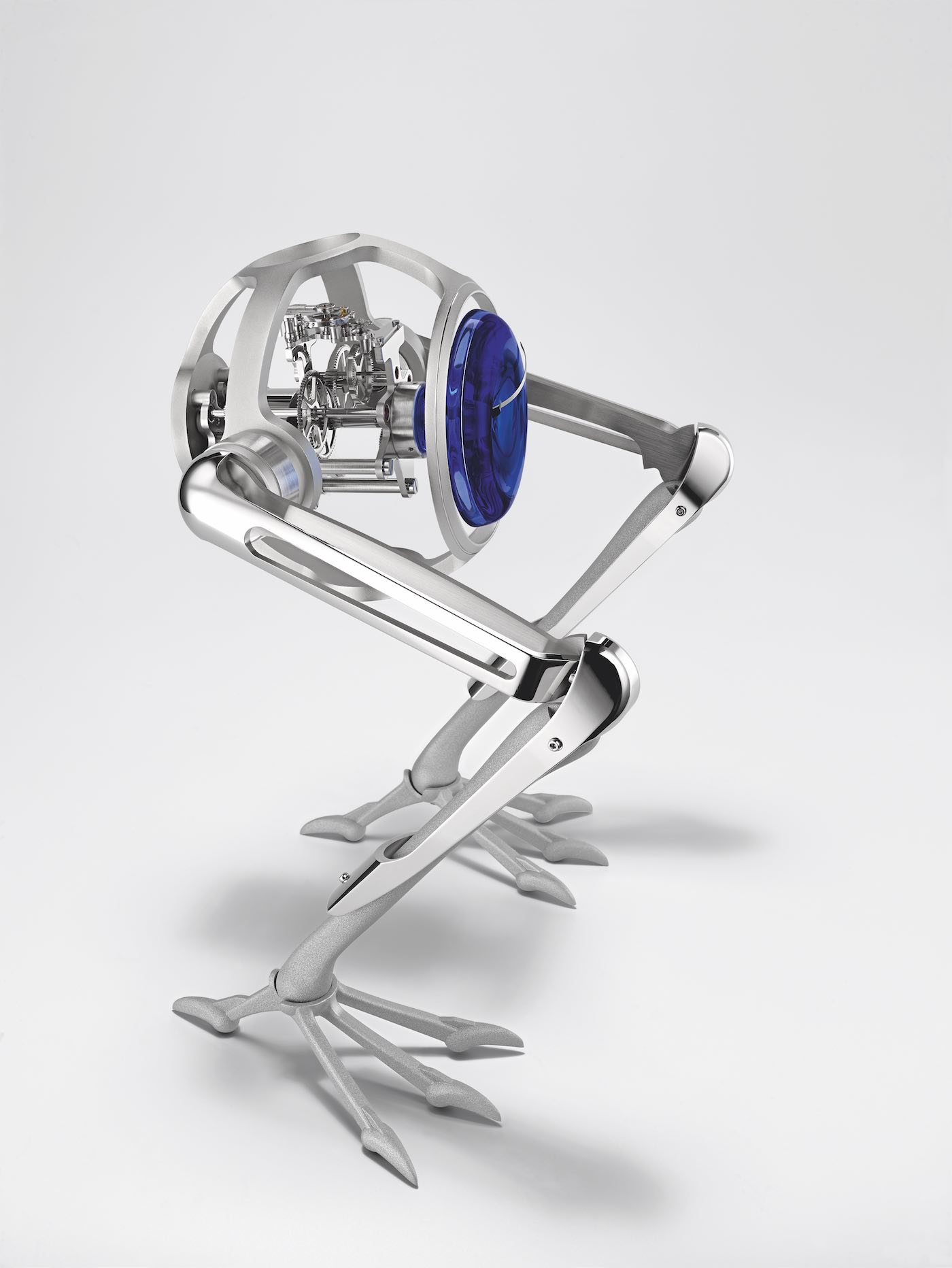 Steel hands indicate the hours and minutes. The simplicity of the face belies the complex clock movement behind it. A 138-component caliber made by L’Épée 1839 beats away at 2.5Hz (18,000 vibrations per hour). The key-wound movement has a power reserve of eight days, so it only needs to be wound once a week. As with old pocket watches, the time can also be set by the key, removing the need for a crown (or keyless work).

This piece differs slightly from the model submitted to the Only Watch auction (due to be held in November). Absent from the standard MB&F T-Rex clock is the small figure of “Tom,” whose name appears in the unique piece “Tom & the T-Rex” that will go under the hammer to raise money for research into Duchenne muscular dystrophy. 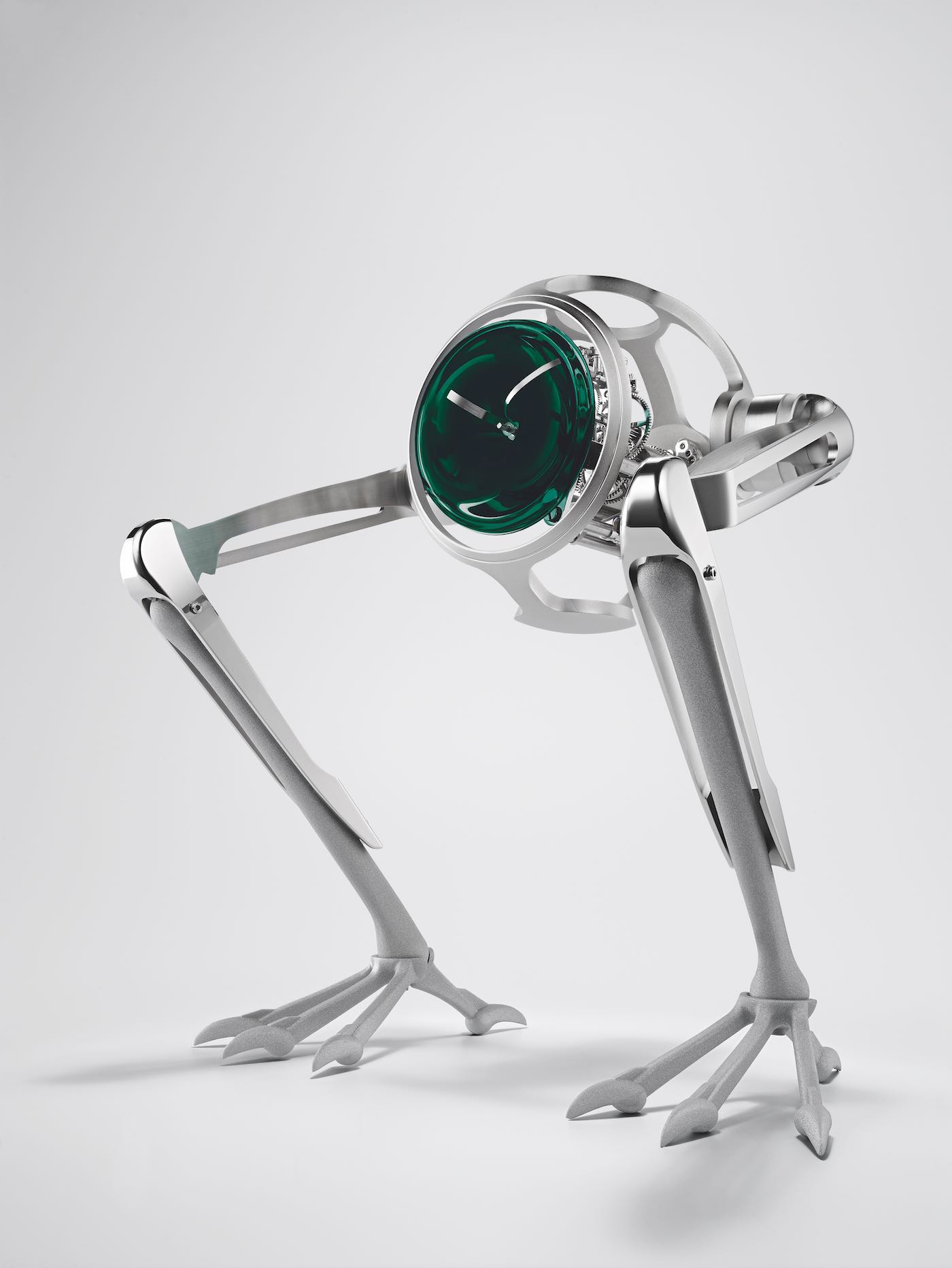 Designer Maximilian Maertens actually modeled his work on actual T-Rex anatomy. The legs were created after he studied 3D scans of the king of the dinosaurs’ lower limbs, bringing an impressive degree of authenticity to the project. 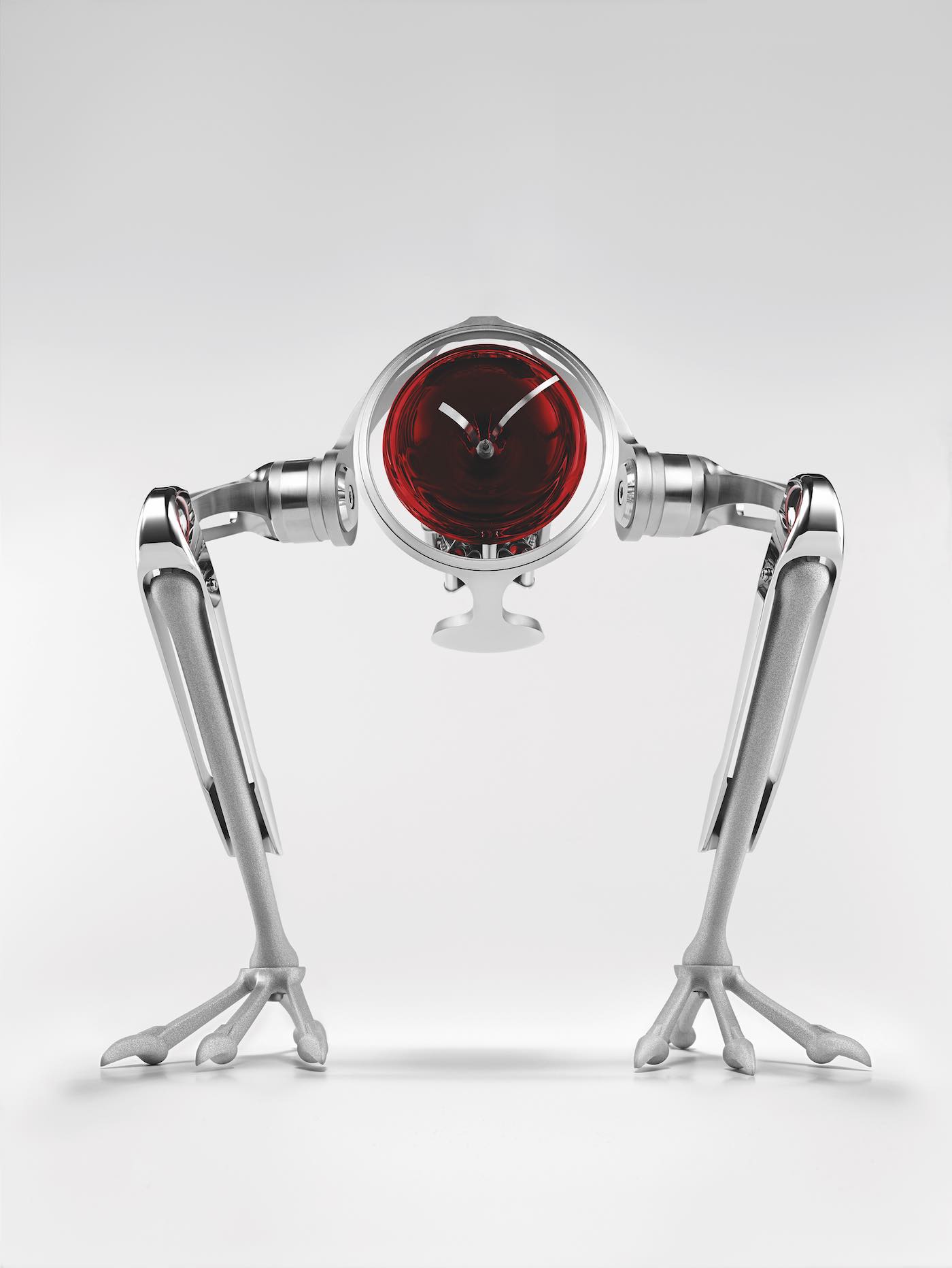 Fans of inventive table clocks will love this, but fans of creative concept conception stories are the luckiest, as the tale behind this piece is as memorable as the clock itself. Maximilian Maertens explains, “The story takes off from ideas given to me by past projects of MB&F, that we have a pilot in his starship discovering new planets. Eventually, he got so far out in space that the only way back to Earth was via a black hole, but it time-warped him back to the time of dinosaurs and the starship was fused with a hatching dinosaur egg. You see the remnants of the starship in the body of the clock and the movement, the dinosaur appears via the legs, and even the black hole remains part of the design, via the dial that sinks inwards towards the center where time originates.” 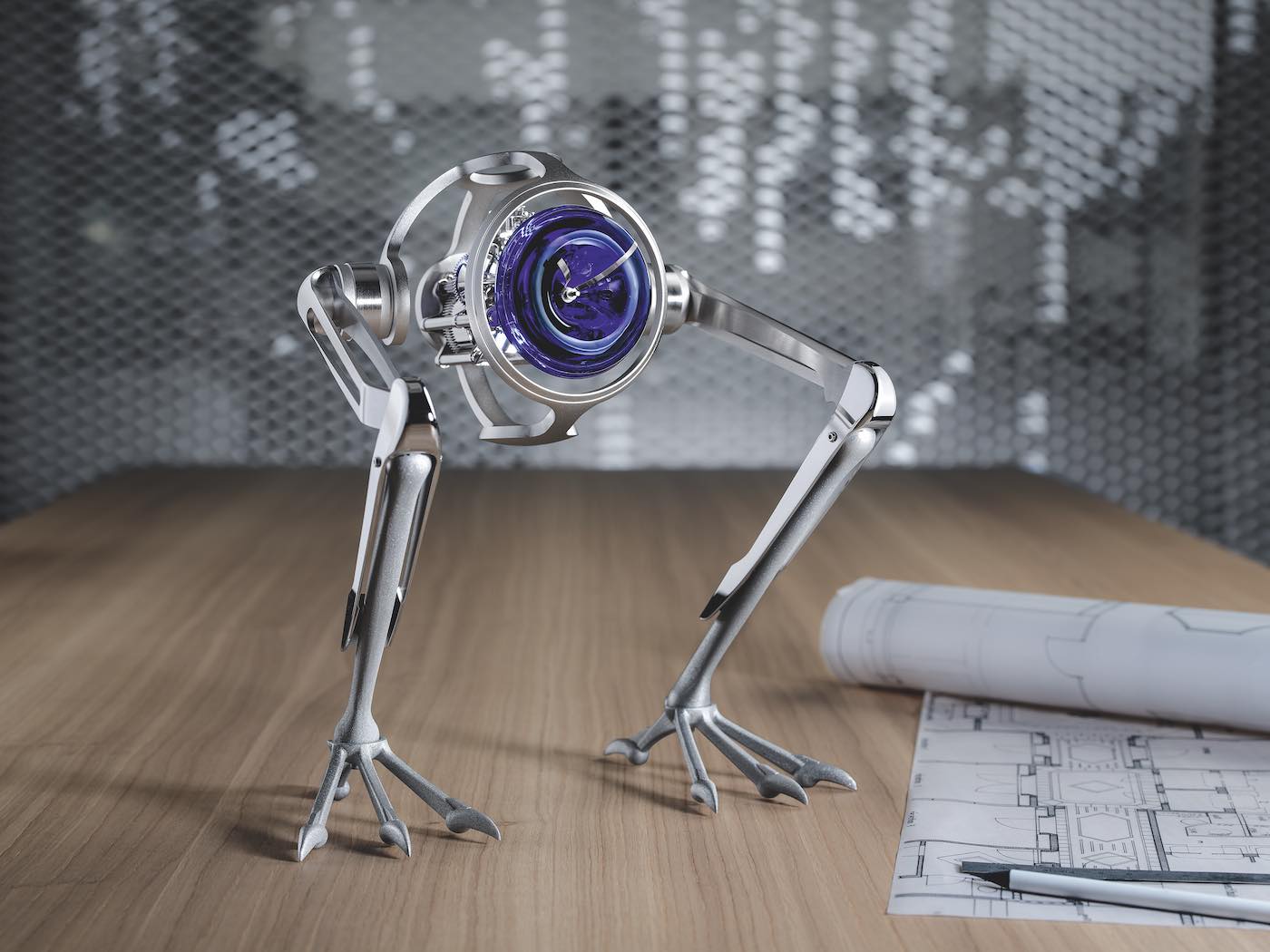 There you have it. This kind of unrestrained, apparently galaxy-spanning creativity is the hallmark of the brand. You may not buy into the backstory created by Maertens as the basis for this project, but it has produced an amusing, characterful object that will, no doubt, make 300 people (each dial color is limited to 100 pieces) very happy, indeed. The retail price for the MB&F T-Rex clock is CHF 22,500 + VAT. Learn more about both brands and their partnership at mbandf.com.