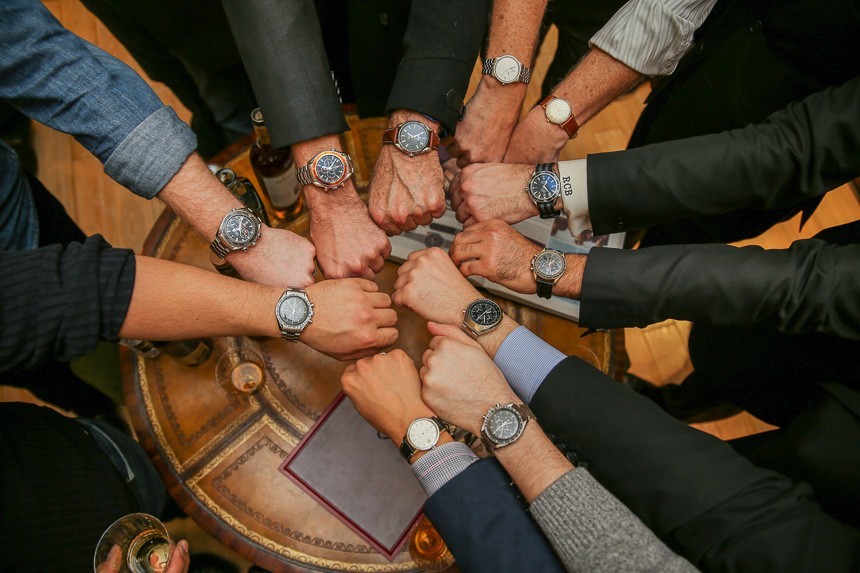 Omega Crawl With aBlogtoWatch Was Fun With Watches Across Time A few days before Christmas 2014, aBlogtoWatch invited a group of Los Angeles watch lovers to visit the Beverly Center Omega watch boutique and then to Jackmond, a special store in Los Angeles started by Jack Khorsandi and dedicated to displaying, servicing, collecting, buying, and selling vintage Omega timepieces. Then, after some deep watch appreciation, whiskey (thanks to Jack), and lots of conversation, we headed nearby for a private dinner.

One of the most interesting things we saw at the Omega boutique was an early presentation of their new “antimagnetic test.” With the debut and increasing proliferation of Master Co-Axial with its anti-magnetic movement, Omega realizes that many of its customers aren’t quite sure why magnetism is so harmful to mechanical watch movements, and just how easily even the smallest magnets can effect a mechanical watch movement. The test showed how small, common everyday magnets could not only stop a traditional watch, but permanently (and dramatically) alter its accuracy. The only solution was to put a watch on a demagnetizing machine. Compared to traditional watches with their “sensitive” metal parts, Omega fitted first the Aqua Terra >15,000 Gauss watch and later all Master Co-Axial watches, such as the new Seamaster 300, with still-secret material parts which are simply not at all magnetic. Whereas a traditional anti-magnetic watch shields traditional parts from magnetism, the Omega Master Co-Axial movement watches side step magnetism altogether by ensuring that the most important elements of the movement themselves are not magnetic. A good example is use of silicon – which isn’t magnetic – but there are other special materials as well which aren’t really effected by magnetism.

According to Omega, the Master Co-Axial movements are tested to resist magnetic fields to about 15,000 Gauss. Apparently that is the strength of an MRI machine – so if I understand Omega correctly you are now safe to wear a Master Co-Axial equipped watch while being scanned in an MRI machine… if you really needed to. At Jackmond, the party got a bit more lively, as Jack was nice enough to supply what turned out to be a very ample selection of quality whiskey. Jackmond is not a large location, which means that only a portion of Mr. Khorsandi’s collection is ever on display. He has a lot more watches in safes at “various banks.” So each time I visit with him, I get to see new things. Some are for sale… and some are just for Jack to show off. This time, one of the amazing things he had was a limited edition set of Omega Speedmaster Apollo Mission watches. One of these sets is located at NASA’s HQ and on display to the public. Each of the watches has the unique mission patch from one of the Apollo missions in the subsidiary seconds dial. Super cool, and certainly something for the ultimate Omega or Speedmaster fan. Jack said he got his at auction. There is never a deficit of extremely rare and appealing vintage Omega watches at Jackmond, even some of the seasoned Omega employees were able to see things they never knew existed. It is a fortunate thing for Los Angeles watch lovers that they can visit so many places with new watches as well as places with vintage timepieces such as Jackmond – which is a true gem. aBlogtoWatch is proud to have been able to put together another interesting and fun event here in Los Angeles – and we thank Omega and its staff for being so hospitable and welcoming. It also helps that Omega has a lot of great contemporary products to serve as extensions of their great history for today’s generations. We are fully invested in more aBlogtoWatch events, and if you have suggestions or ideas, by all means, let us know – since these events are ultimately to be fun and enjoyable for our valued audience.