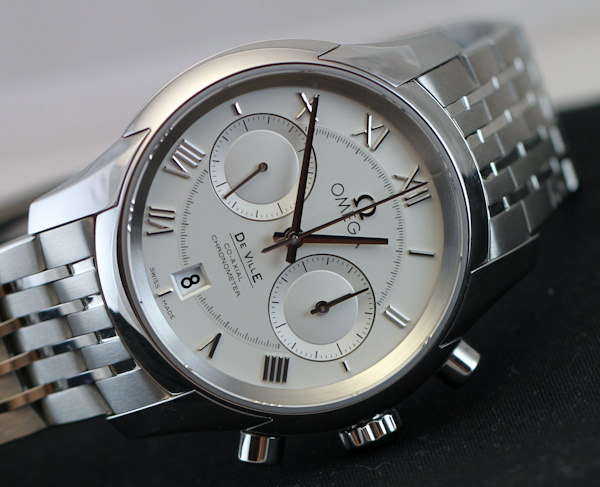 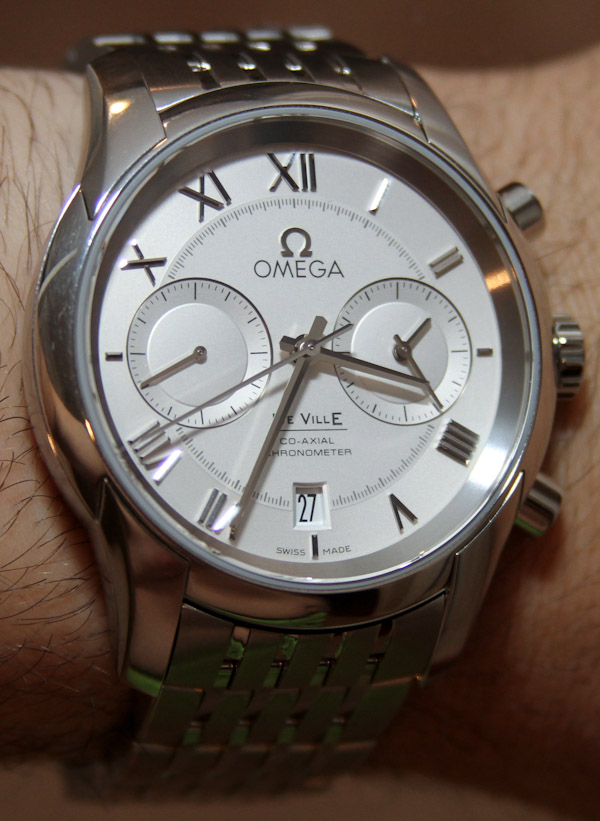 In the United States Omega is to a very large degree the “Seamaster” and “Speedmaster” watch brand. Those two timepiece families mostly dominate the image we think of when someone mentions Omega. Let’s think about some of the more noteworthy things Omega is known for. Well there is the moon landing watch for one – that was a Speedmaster. There are the modern James Bond watches, those are all Seamasters – which are on my mind right now as I just saw Skyfall a few days ago. Omega is a sport watch brand to Americans, and that is how we like it.

Internationally Omega is more than that. Lest we forget the Constellation and De Ville watch families. These two arms of Omega are decades old and represent a different, more formal side of the brand. Even if they do not represent what you are looking for in an Omega, they are worth being familiar with. In the US they don’t have as much traction as the “masters,” but they are still good watches. Let’s take a look at one of the newer De Ville models – the freshly redone Co-Axial Chronograph. 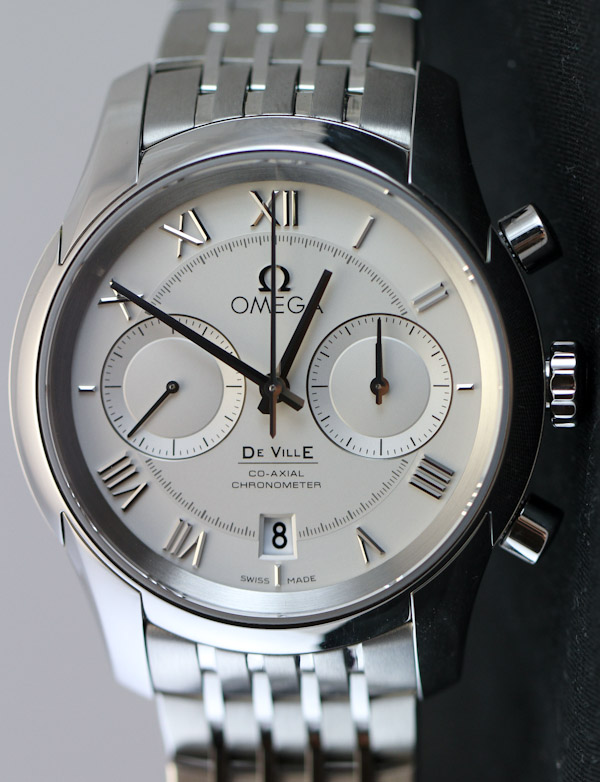 This might be one of the first times I have really discussed a De Ville model on aBlogtoWatch. Mostly because some of the older models aren’t to my taste. Which is ironic because the first ever Omega I owned was a vintage hand-wound De Ville from the 1970s. When I saw the new Co-Axial Chronograph models at Baselworld 2012, I knew Omega had a relative hit. My problem with the older non-three hand men’s De Ville models was that they seemed to lack a cohesive design, and were unsuccessfully asymmetrical in their appearance.

A few years ago Omega designed the De Ville Hour Vision which is what all modern De Ville models are based on. Omega went back to the roots of what the De Ville collection was supposed to be and come out with a visually interesting dressy men’s watch with a touch of classic design as well a subtle Art Deco aesthetic. The Hour Vision also featured the new (at the time) Omega caliber 8500 automatic movement – which was an in-house made Omega caliber that of course contained a Co-Axial Escapement. 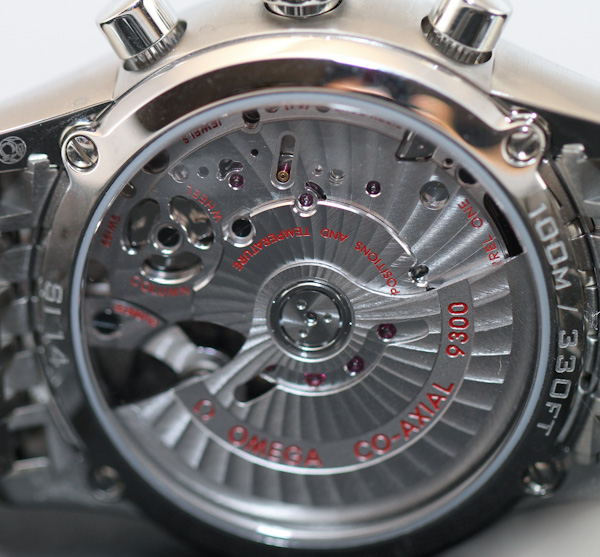 The Omega caliber 8500 movement ended up being the base of the three-hand Seamaster Planet Ocean models, as Omega continued to push forward with more and more watches with in-house movements. After that, the Omega caliber 9300 automatic chronograph movement came out for Omega’s sport chronograph models. You can search aBlogtoWatch for more details on the caliber 9300 – that we discussed in great detail when it first came out.

Now, rather than Omega sport watches borrowing from Omega dress watches, the opposite is true as the in-house made Omega caliber 9300 chronograph makes its way into this revised De Ville Co-Axial Chronograph collection. Steel De Ville’s will have the caliber 9300, while solid gold models will have the caliber 9301 (the difference is that the 9301 has a gold rotor and bridge over the escapement). The 9300 features a two-register chronograph, but one of them has two hands and is able to measure a full 12 hours. If you are quick you can also use the chronograph as a second time zone by starting the chronograph at noon (or midnight) in your reference time, and then setting the main time to your local time. 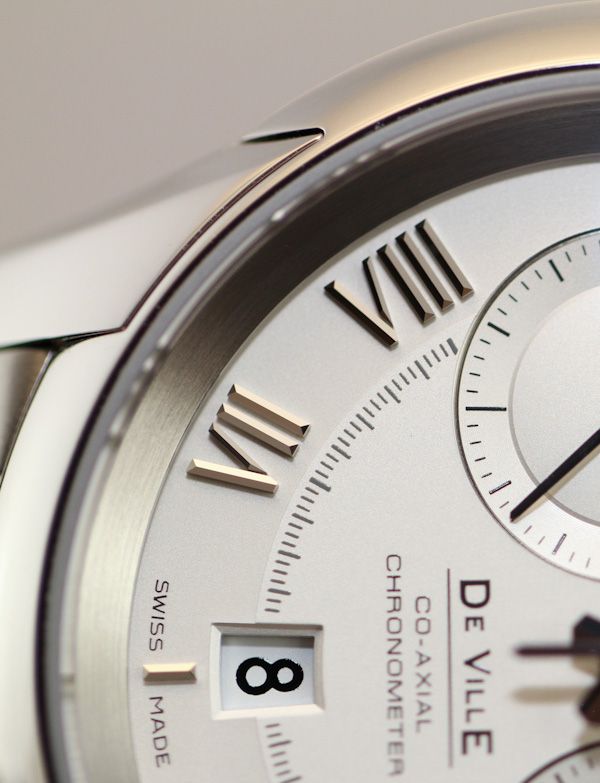 The movement also has a silicon balance spring and a power reserve of 60 hours. Don’t forget that it is also COSC Chronometer certified, and it is lovely to look at through the sapphire crystal caseback window of the watch. Basically, those wanting a more formal watch with Omega’s best chronograph now have an alternative to the Seamaster Planet Ocean Chronograph or the Speedmaster Co-Axial Chronograph. The 9300’s bi-compax two register design is very symmetrical and thus visually flattering to a watch dial. This is especially true when you place the date window at 6 o’clock. This stunning new layout for the modern De Ville model is what makes the Co-Axial Chronograph model a winner. Choices are relatively plentiful as the De Ville watches come with silvered, black, or deep blue dials matched to a steel or 18k red gold 42mm wide case. Note that the bulging rounded corners of the case make it wear a bit smaller than you might think. While this is a formal style watch, it is rather tall off the wrist and isn’t designed to slip neatly under shirt cuffs.

While I do find the crown and pushers a bit plain, the newer De Ville case is rather attractive with high-quality finishing and nice contrast polishing. I am happy to see that there is at least 100 meters of water resistance as well. The available bracelet however has proven to be a polarizing design. I intentionally wanted to review it in order to see how it looks on the wrist after wearing it for a while. From a quality perspective, the bracelet is well-made, and comfortable – in other words, what you’ve come to expect from modern Omega metal bracelets. From a design perspective, the mixture of larger and smaller polished and satin-finished links is a matter of taste. I could live with it just fine, but for me it will never be a Planet Ocean bracelet for instance. The alligator strap with deployant clasp is mighty appealing for a watch like this. I do wonder what it would have been like if Omega created an updated version of the last generation De Ville’s bracelet which is sometimes called the “armadillo” bracelet. It is probably one of the most unique metal bracelets Omega has ever designed – though I will save that discussion for another time. 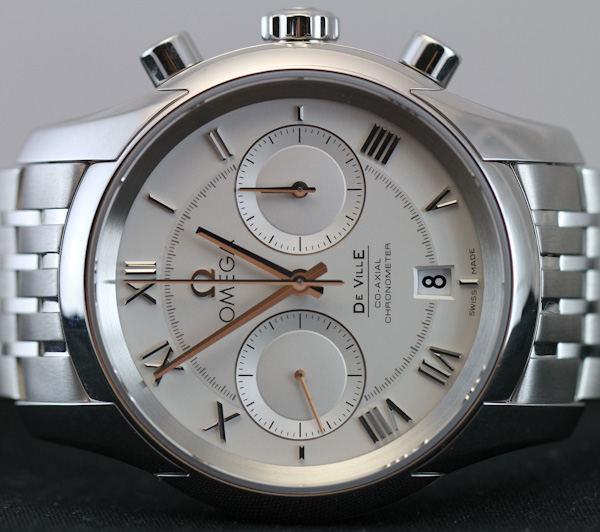 While I find the dial design of the De Ville Co-Axial Chronograph sharp, I do miss the presence of luminant. Instead you get crisply cut hands and applied Roman Numeral hour markers. A close-up image of the dial shows the detail of the diamond-cut hour markers and how good they look. These days, it is diamond-cut or bust in my opinion. Brands not using the best quality dials and with cheap looking hour markers, who also try to charge a lot, deserve low sales. Though it is easy with Omega’s size and production power to have all the best machinery and suppliers. A lot of small brands simply can’t claim that.

Mixing new and old, the De Ville once again offers a lot to enjoy with a noticeable quirkiness that you often don’t see from mainstream brands. I like quirkiness. Think of how much more interesting Rolex would be if they had more quirky things to offer. They really don’t being mostly conservative. At least Omega does a little of that in addition to offering the Toyota Camry and Honda Accord of mainstream luxury watches with the Seamaster Planet Ocean and Speedmaster models. Price for the Omega De Ville Co-Axial Chronograph watch on the bracelet is $9,000.