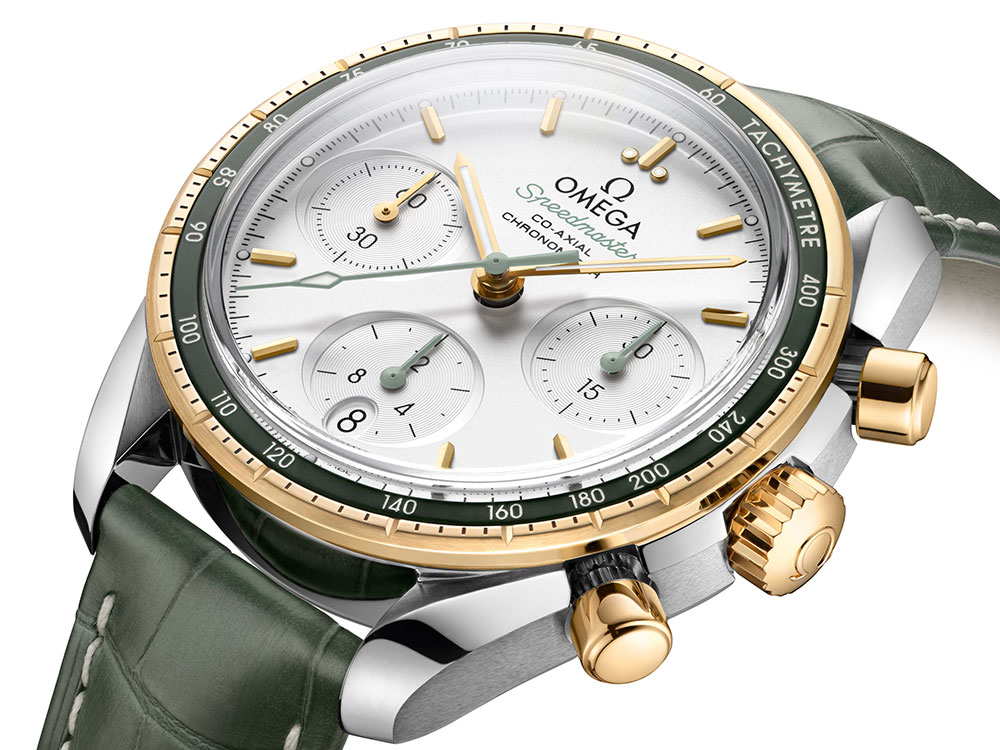 Immediately noticeable are that the sub-dials and date window at 6 o’clock have a distinctive oval shape to them, which gives the dial a sense of depth and detail. According to Omega, the inspiration behind these oval-shaped sub-dials comes from some previously released Omega De Ville watches. The crescent shapes flanking the round subdials are also reminiscent of Omega’s Greek “Ω” logo. Right now, Omega has provided information and images of just four of the watches that they say are representative of the range overall, so let’s see what we’ve got. The dials on all these new watches are reminiscent of those on previously released Omega Speedmaster watches such as the green-bezeled moon phase Speedmaster introduced last year but obviously more affordable and smaller. The reference 324.23.38.50.02.001 or, simply put, the Green-bezel version, has an opaline-silver dial, and is complemented by the 18k yellow gold hands and applied hour indices. On this version of the watch, the outer bezel ring has been done in 18k yellow gold, matching the chrono pushers and the crown at 3, whereas the tachymeter ring has been done in a deep forest green which is well matched by the green leather strap and the varnished green chronograph hands. The forest green and the gold accents also combine to give this version a dressy aesthetic, which is appropriate given the 38mm case size of this watch. It’s weird… but I think I like it. The reference 324.30.38.50.03.001 Omega Speedmaster 38mm is very cool with a light blue dial and seems to be the sportiest model we’ve seen here. This version is devoid of any precious metal and features a sunray-brushed, ice-blue dial. The dial is well accompanied by the dark blue aluminum bezel, and similarly colored subdial and chronograph hands. This is the only one out of the four watches shown here that comes on a (polished and brushed) stainless steel bracelet. The reference 324.38.38.50.55.001 Omega Speedmaster 38mm, or the “Cappucino,” has a dual color dial with the light brown shade occupying most of the real estate, and the sub dials being done in a nicely contrasting dark brown shade. But what makes this version stand out is the bezel, which is studded with diamonds on the outer ring, giving the watch a luxurious feel. The tachymeter scale on this one has been done in a nice shade of brown, matching the taupe brown leather strap. I think it’s obvious this would be seen as a ladies’ model. The Omega Speedmaster 38mm reference 324.28.38.50.02.002 is another ladies’ piece featuring the diamond studded bezel ring with the tachymeter scale done in white matching the white leather strap. The mother-of-pearl dial looks like the right choice here as it complements the pink-colored chronograph hands and the pink stitching on the strap really well. Even the subdials on this version have been studded with diamonds. The watches are powered by Omega’s Calibre 3330 which isn’t one of their latest METAS certified movements, and that’s kind of a letdown, for sure. The movement operates at 28,800vph and has a 54-hour power reserve which is pretty good but, honestly, at this price point, I would expect a newer movement.