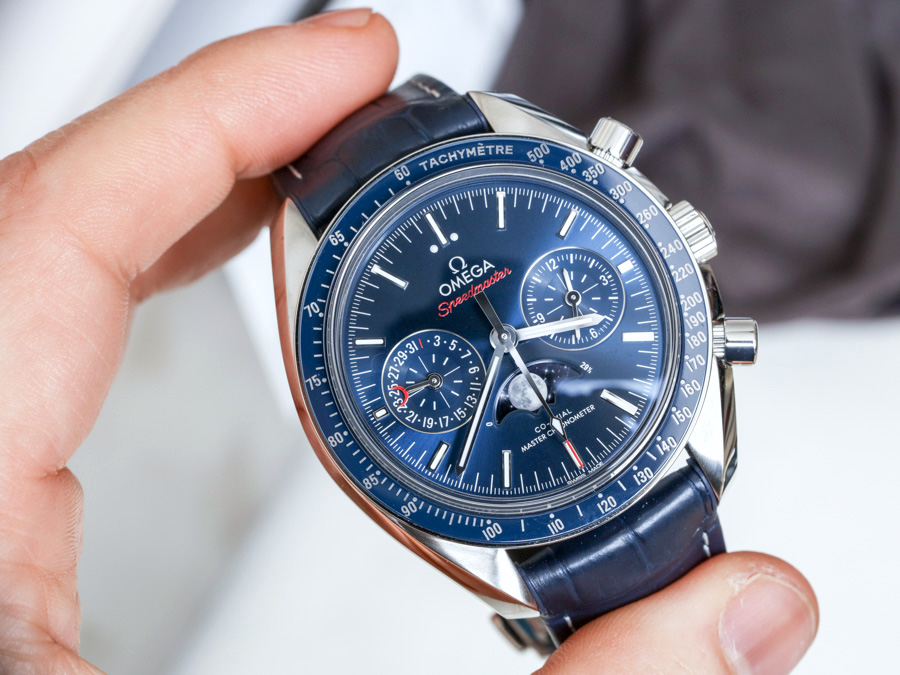 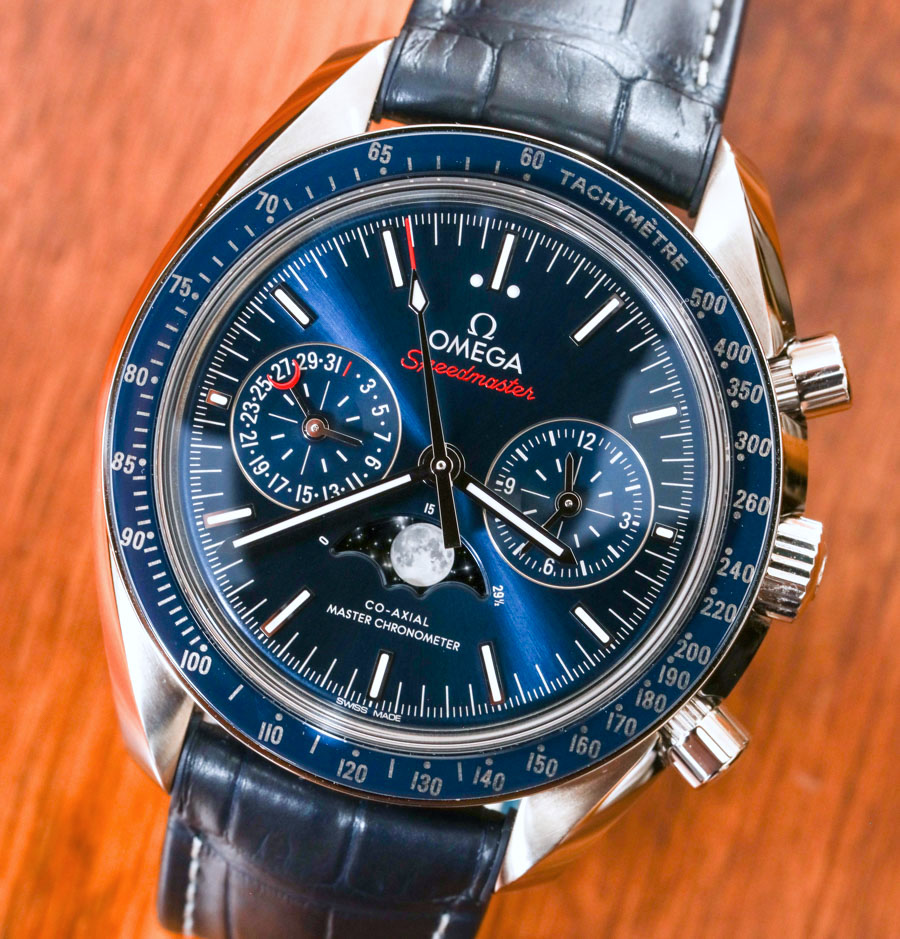 This year, the iconic Omega Speedmaster celebrates its 60th anniversary after originally launching in 1957. It was not until over a decade later that it started to be known as the “moonwatch.” All timepiece enthusiasts know (after the fact has been endlessly drilled into their clearly eager minds) that the Speedmaster by Swiss Omega was chosen by American NASA to be the official timepiece worn by Apollo mission astronauts and eventually to the moon – a few times. 2019 will be the 50th anniversary of Apollo 11, and I am sure hoping that Omega has something interesting brewing for that. But I’m getting ahead of myself, because right now I am about to share my review of the 2016-debuted Omega Speedmaster Moonwatch Co-Axial Master Chronometer Moonphase Chronograph. 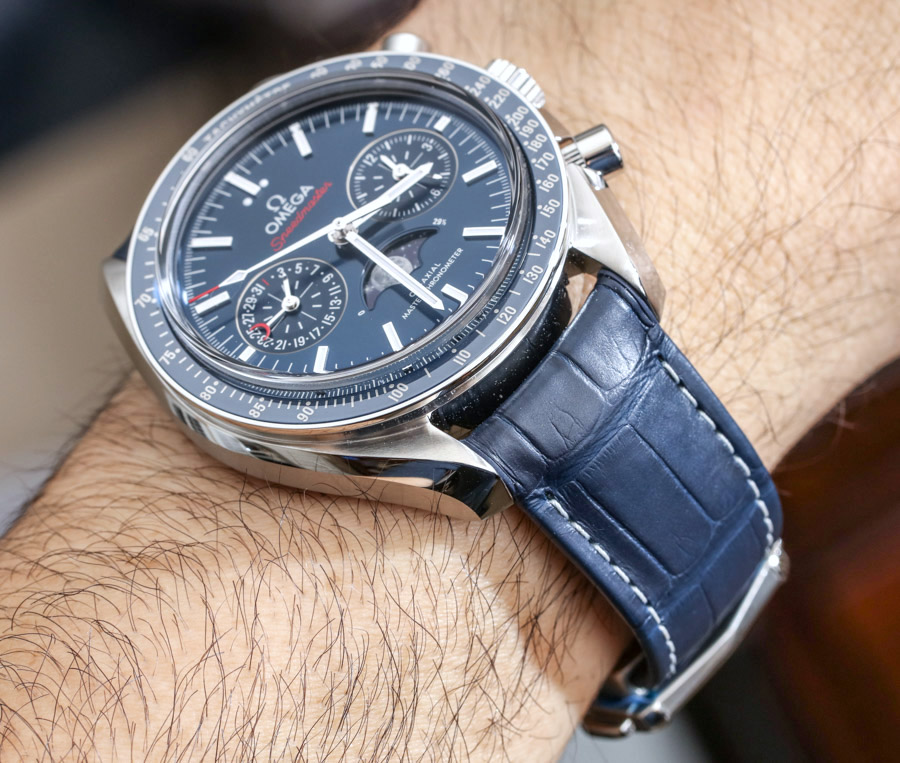 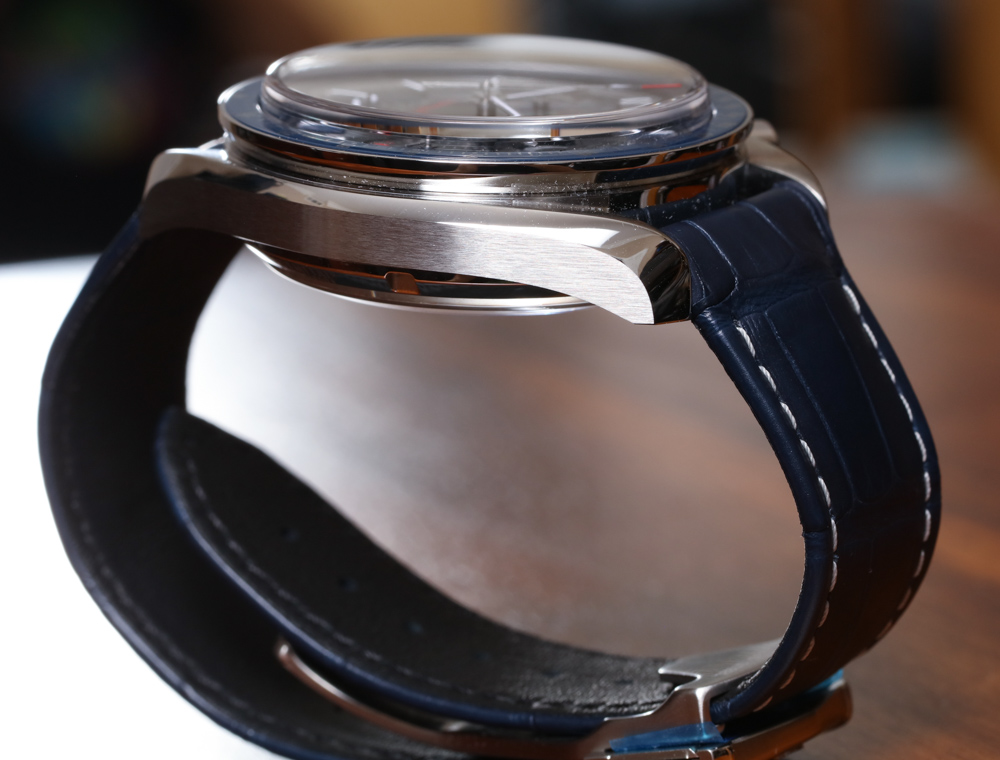 Since the moon missions, the once racing- and pilot-themed Speedmaster became the timepiece synonymous with the moon and all things related to astronauts. It is a persona that continues to endure today, even if Omega has yet to decide how it will truly be a part of contemporary spaceflight activities in order to secure future relevance in this theme. What has really helped the Speedmaster endure, though, isn’t just a connection to the historic moon missions or NASA, but rather its winning design. Moreover, the Speedmaster has been rendered in so many ways with so many variants that even highly trained specialists have trouble keeping track of all the models. 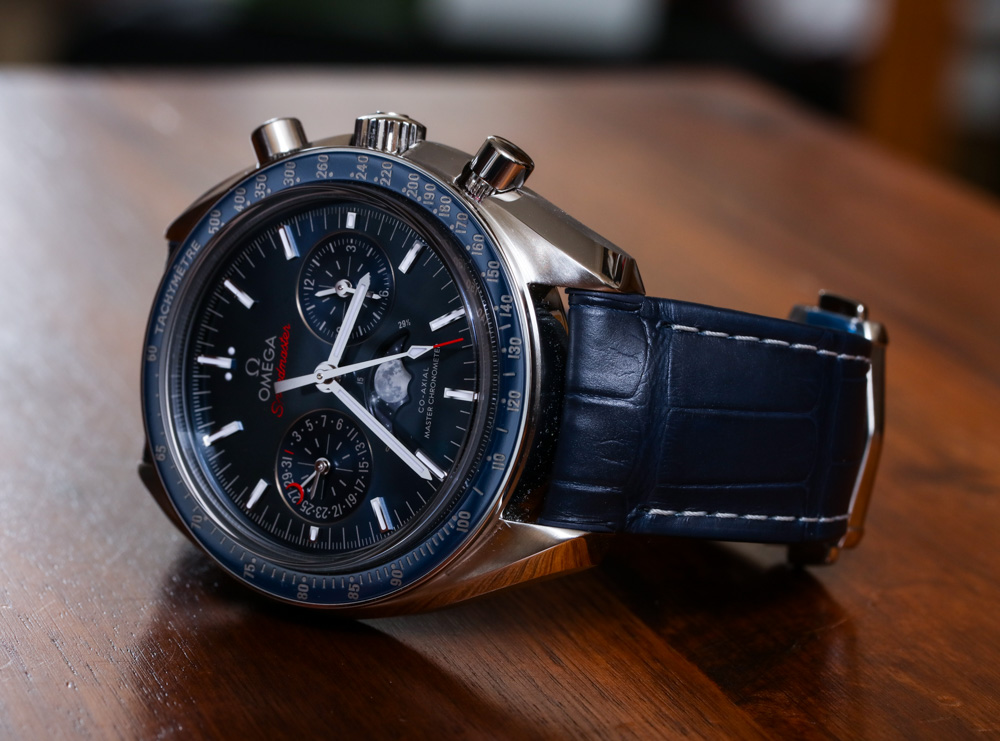 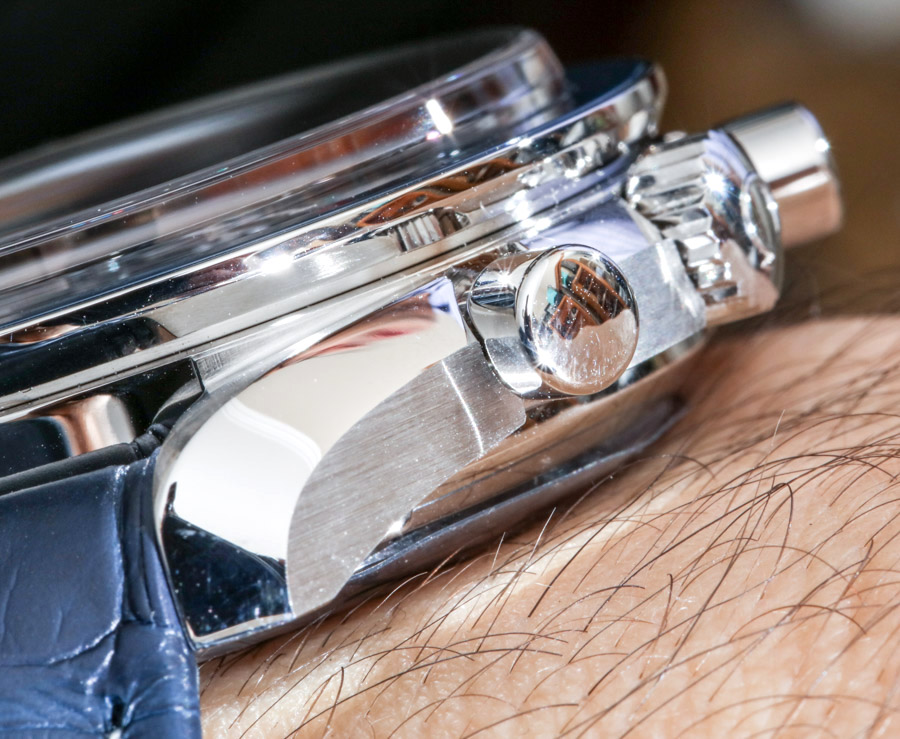 Speedmaster product naming conventions don’t help much, as they are often confusing and similar to one another, or abstract and difficult to remember. For example, the official name of this watch according to the Omega website is the “Omega Speedmaster Moonwatch Omega Co-Axial Master Chronometer Moonphase Chronograph 44.25 MM,” and that doesn’t even include the reference number. The name actually includes “Omega” in it twice. The only reason for this is that Omega has so many similarly themed watches (even though the timepieces themselves may be quite different) that it becomes very challenging to describe them. There have been other Omega Speedmaster models with moonphase indicators and chronographs in the past. In fact, one of them is still available for sale, with an almost identical case, but a different dial layout and movement. 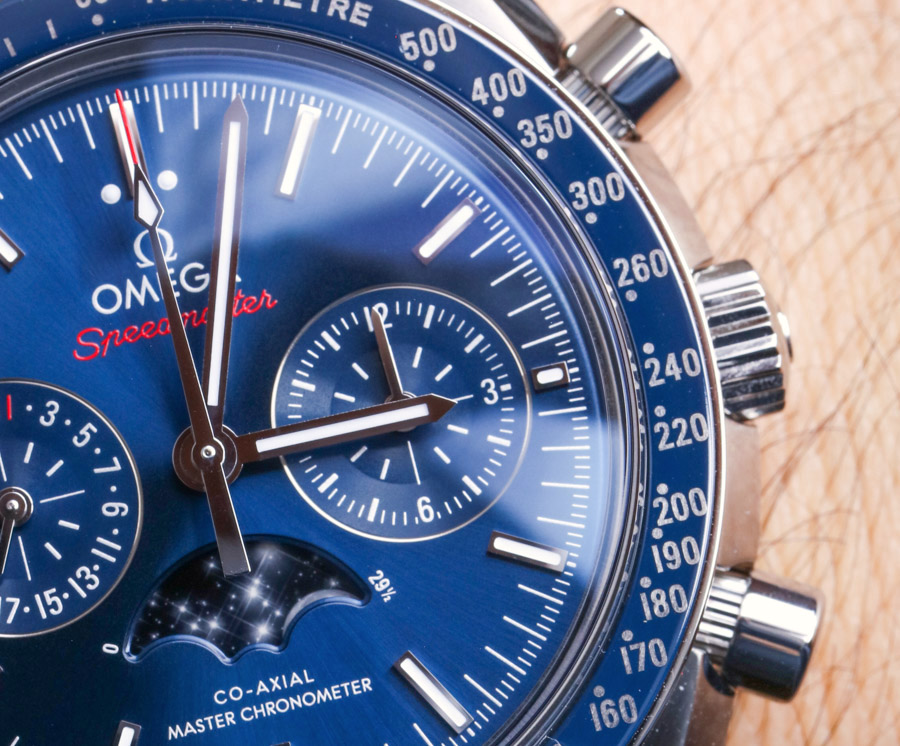 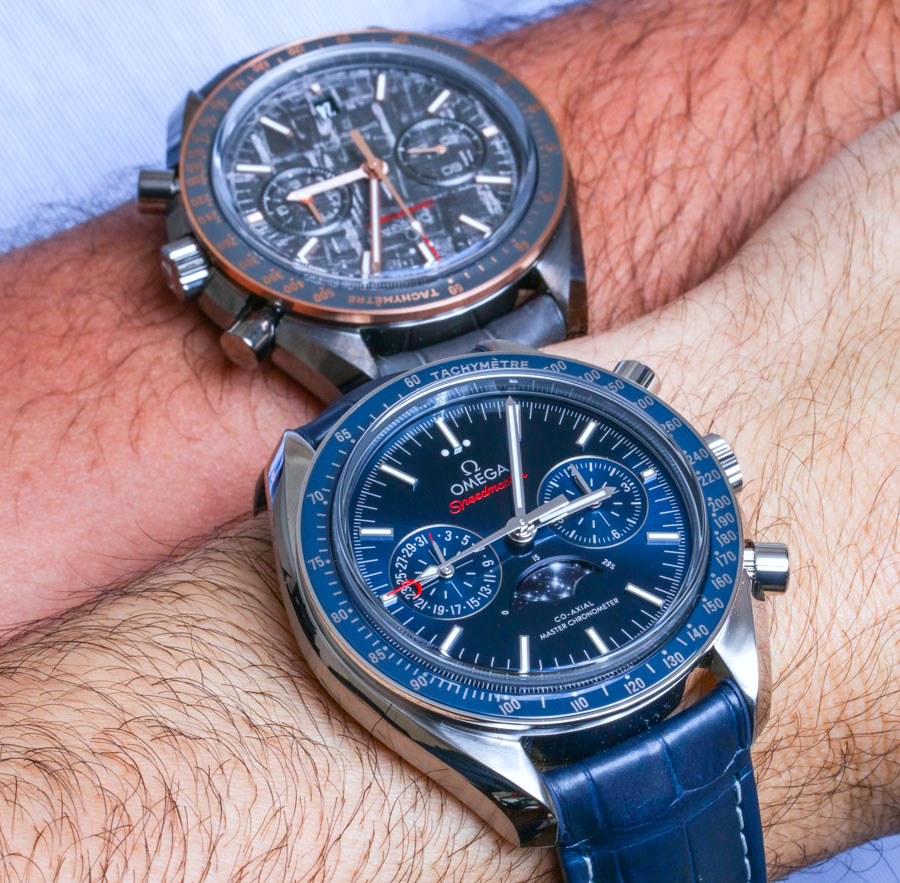 Even when we wrote about the Omega Speedmaster Master Chronometer Moonphase (as I call it for short) after seeing it hands-on after Baselworld 2016, we weren’t quite sure what to call it. With a ten-word name and a complicated assortment of special features, this otherwise very lovely Omega watch is going to need a lot of special attention to stand out from the crowd. My overall take on the Omega Speedmaster Moonwatch Co-Axial Master Chronometer Moonphase Chronograph is that it is beautiful, distinctive in its own right, and comfortable. At the same time, you need to be a veritable Omegatologist to understand the depth of its technical appeal, as well as how it fits into the larger collection. Omega is a strong brand because it has a lot of good watches. Alternatively, you could see it as Omega’s weakness as a brand that it offers too many watches to allow relatively casual timepiece lovers an opportunity to choose easily. 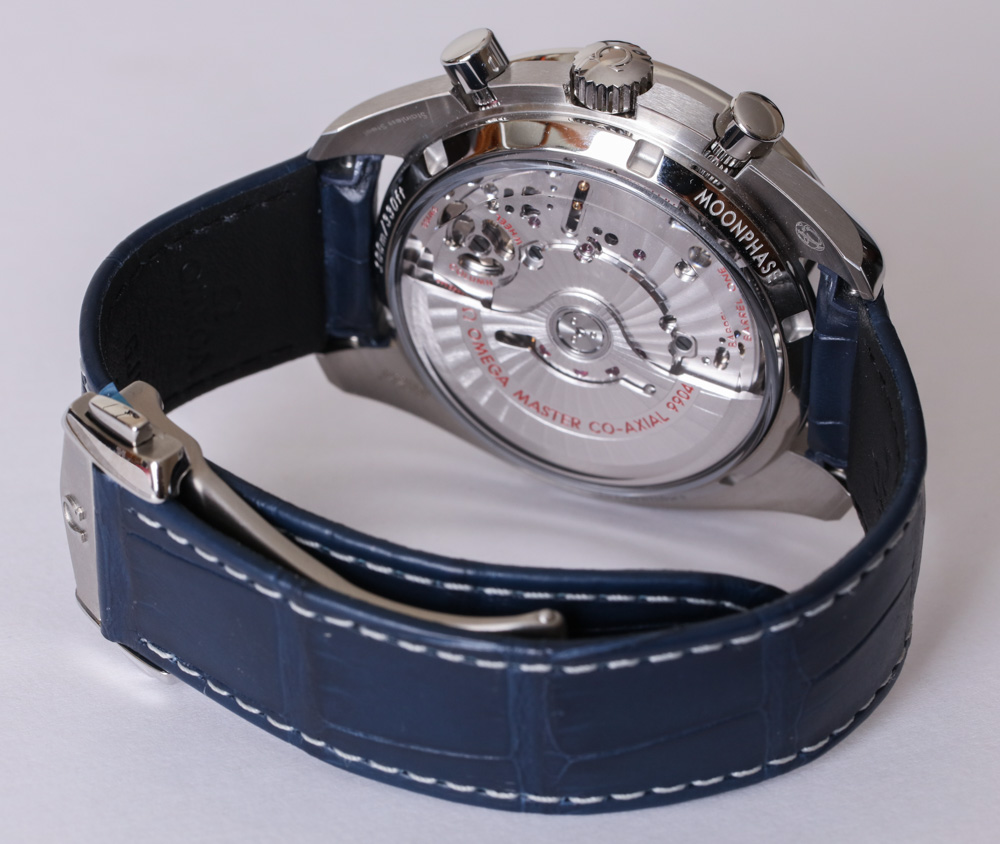 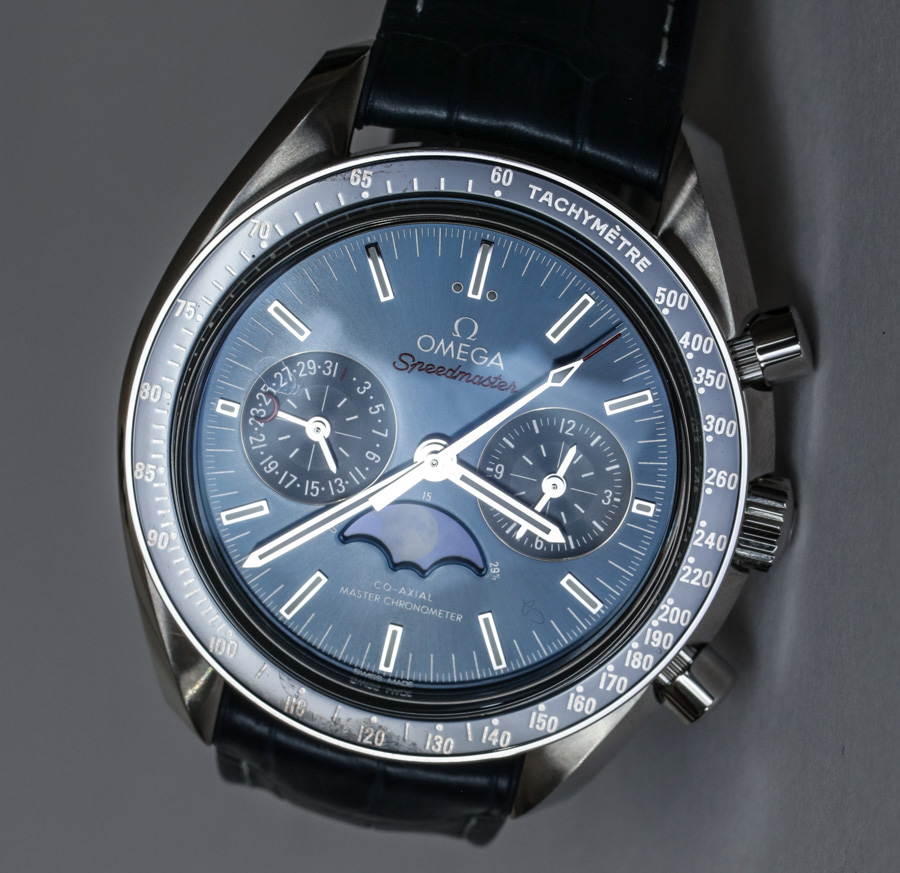 Several years ago, in 2011, the Omega Speedmaster got modern when Omega released the first new generation models with the in-house-made caliber 9300 family movements. These did away with the chronograph’s three-subdial layout, opting for a two-subdial design, but with a right subdial with two hands (for measuring hours and minutes). The 9300 family of in-house automatic Co-Axial chronograph movements is now being replaced with the 9900 series family of movements which introduces some upgrades such as non-ferrous metal parts for key components, which makes the watch more or less totally resistant to magnetic fields. This is part of what “Master Chronometer” implies and is also part of the rather special METAS certification that each Master Chronometer gets. 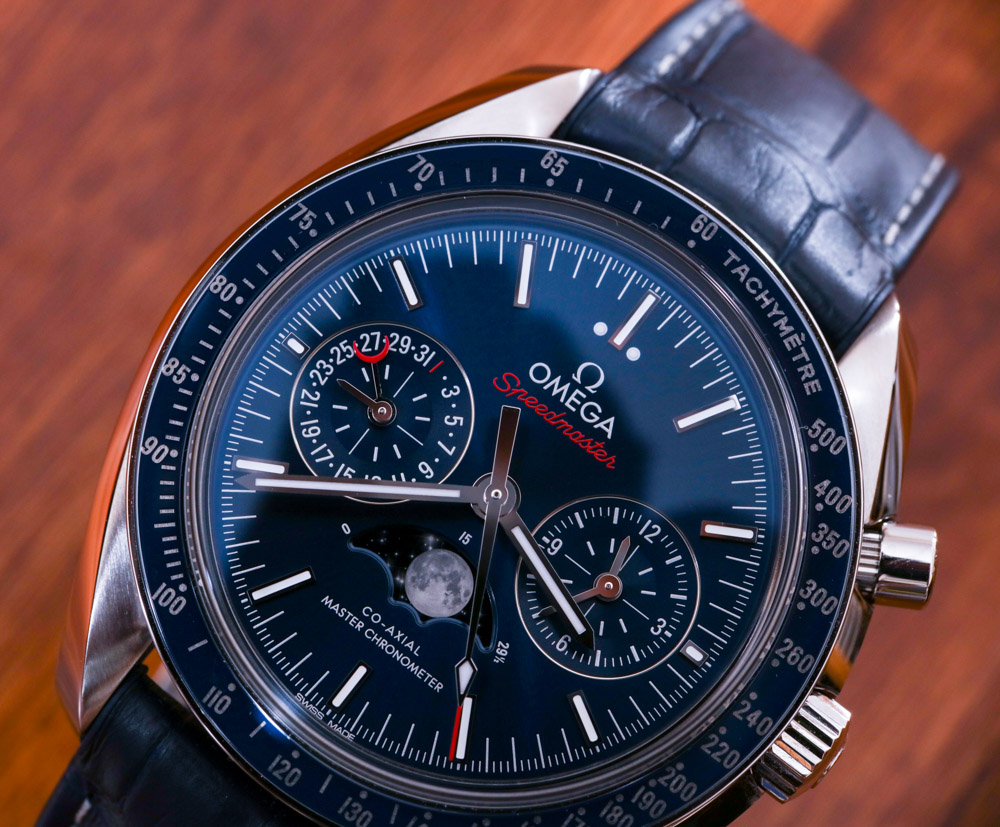 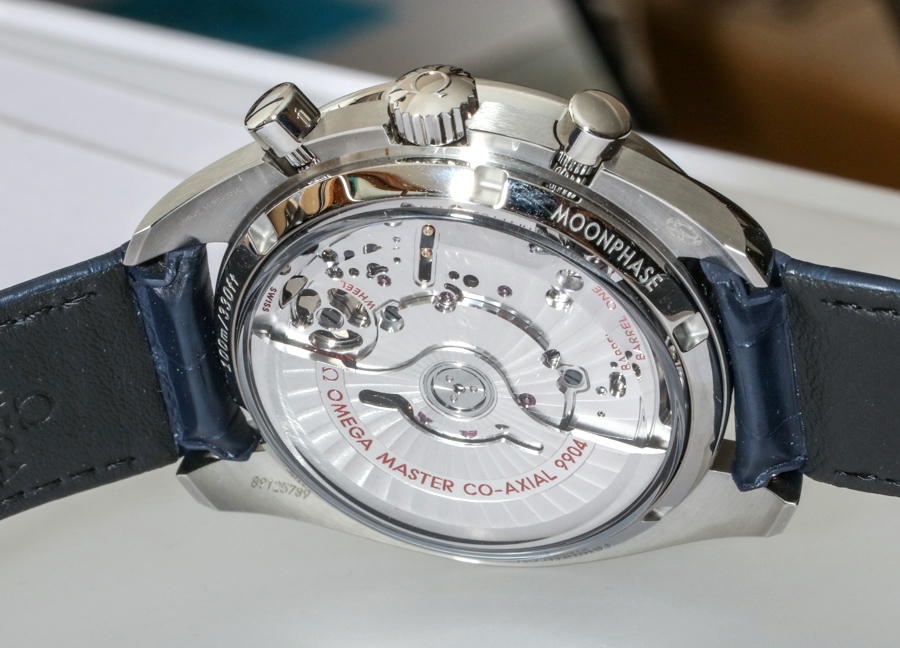 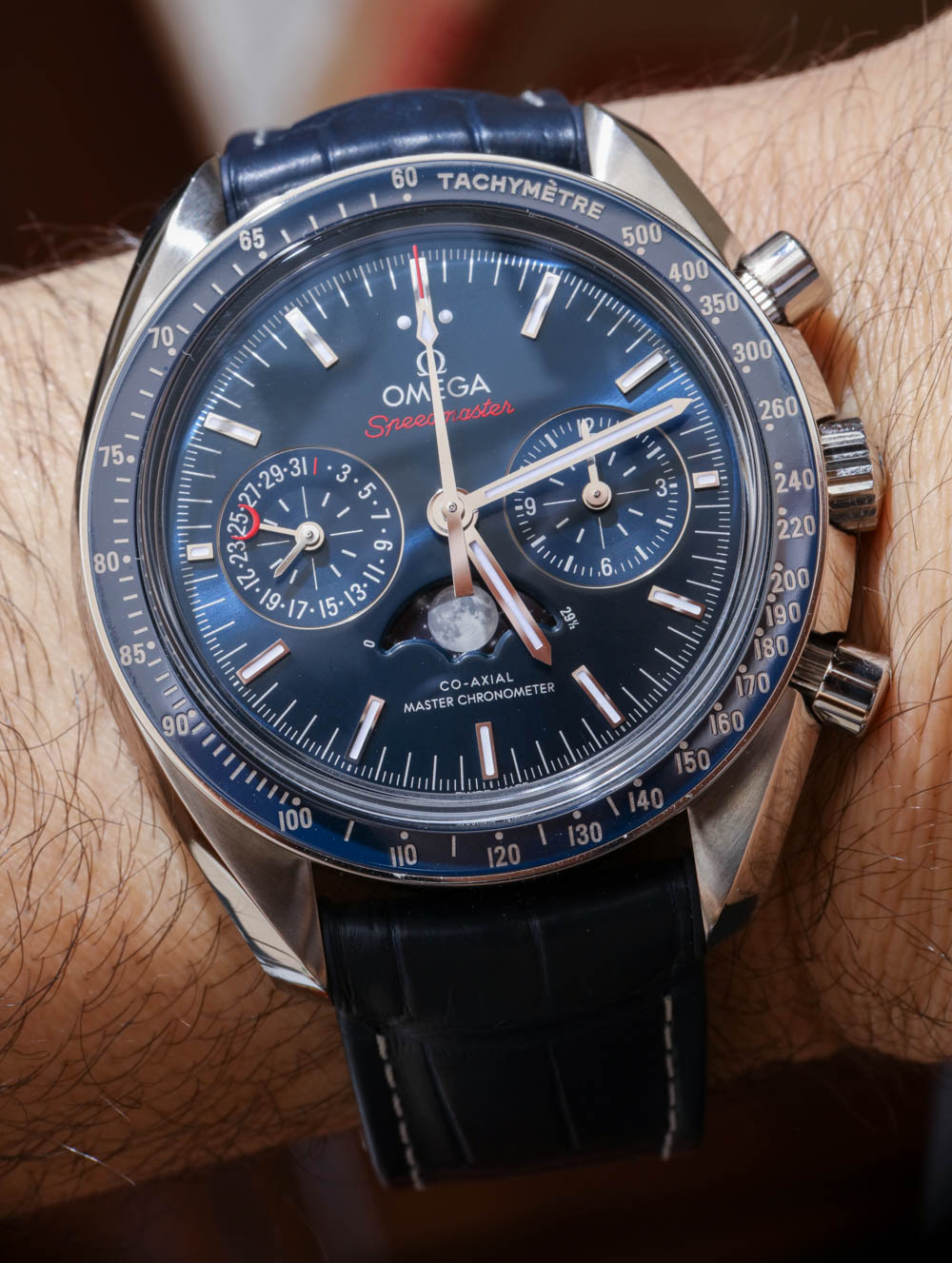 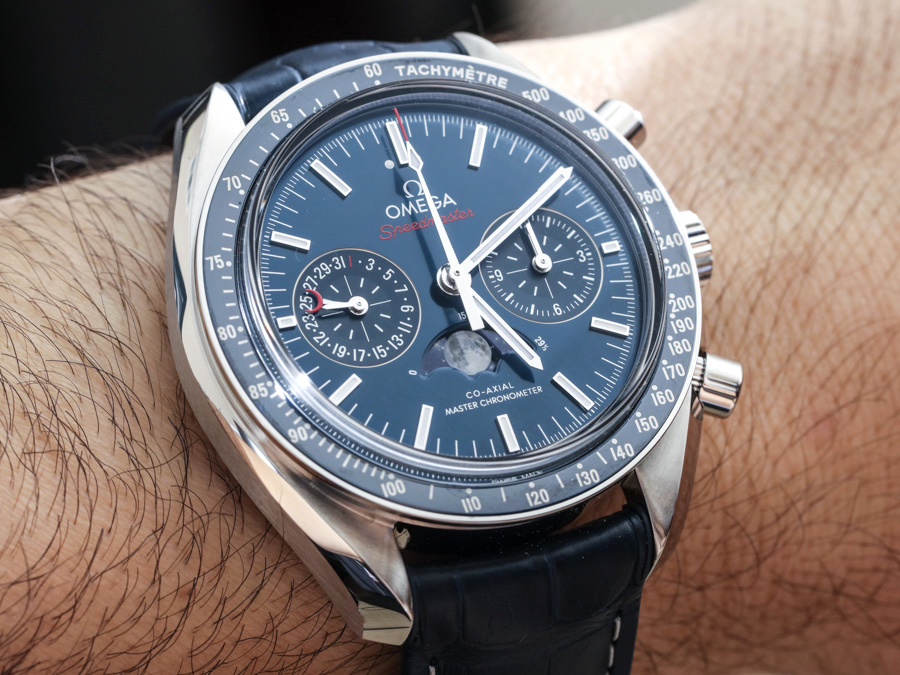 Oddly enough, the other currently available Omega Speedmaster Moonphase Chronograph watch has the same size case (44.25mm wide) and is about the same price (actually a bit more). It is the Omega Speedmaster Moonwatch Professional Moonphase Chronograph. This builds on the “classic” Moonwatch Professional style watch based on a more traditional manually wound movement (which, compared to the 9900 series, is rather primitive for daily wear, in my opinion – unless you really like “old school charm”). This latter watch uses the caliber 1886 which builds on the 1861 by adding an upper subdial under 12 o’clock that has a moonphase indicator surrounded by a pointer date indicator dial. 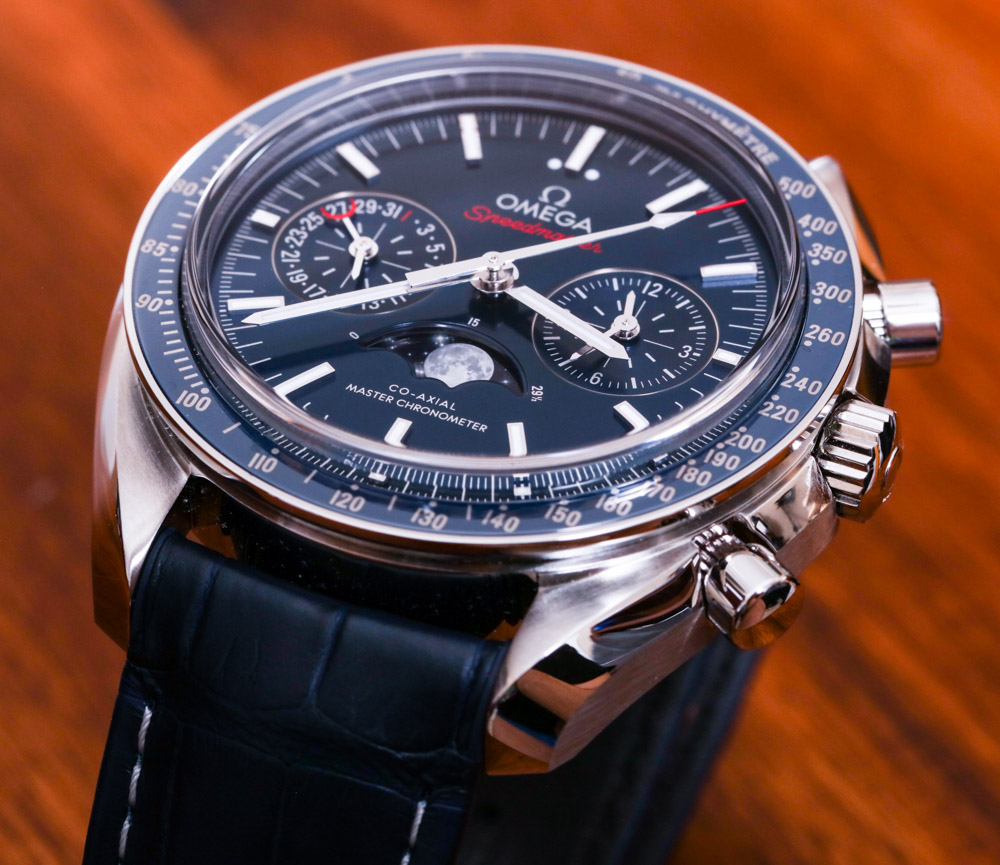 Both of these latter elements exist in the Omega Speedmaster Co-Axial Master Chronometer Moonphase but with a different layout. Here, the relatively empty space over 6 o’clock (where the date would normally go) is used for a traditional moonphase indicator disc with a life-like representation of the moon. The left sudial has hands for both the date as well as the running seconds. The right subdial is still used to measure the chronograph minutes and hours (the central hand on the main dial still handles the chronograph seconds). 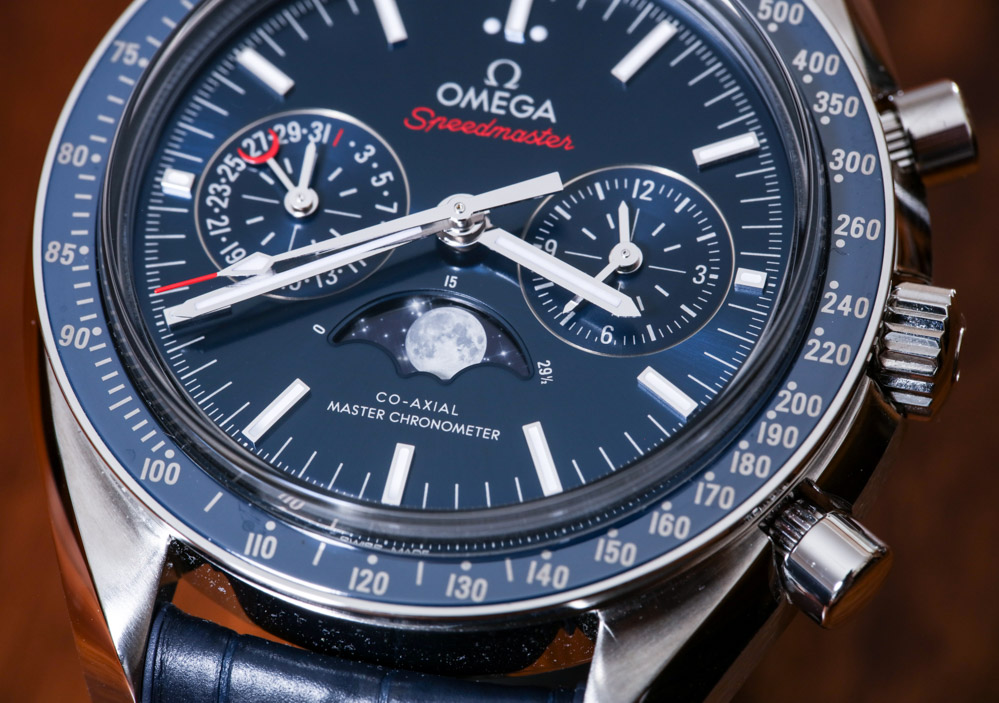 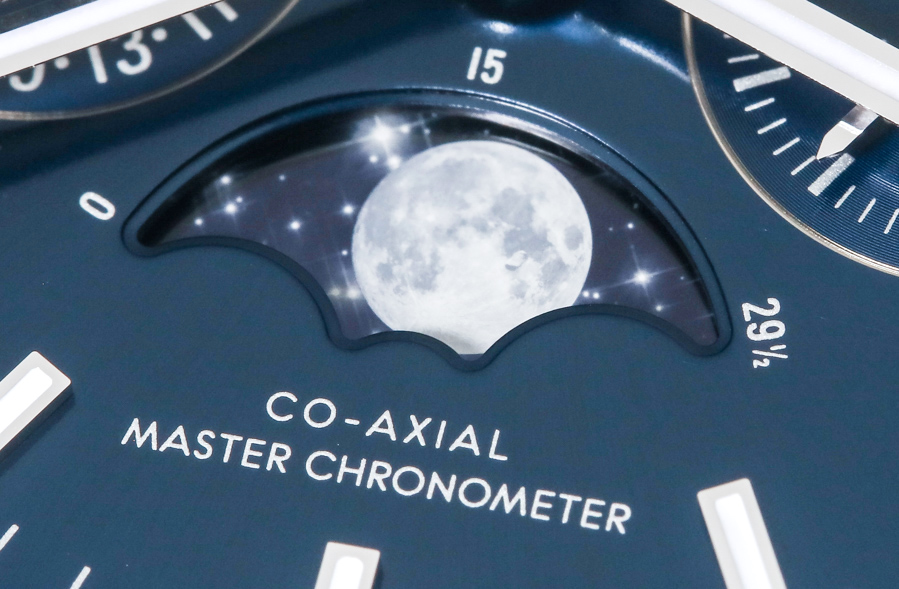 The steel versions of the watch have a printed life-like representation of the moon in the discs, while the gold and platinum versions have textured moonphase discs which offer a different look. The platinum version of the watch even goes so far as to have a small magnifier disc where the date pointer hand is. This is pretty cool, but I recall Omega saying that the part was such a pain to make that they would not have been able to make it for a non-limited edition. For more information on the precious metal-cased versions of the Omega Speedmaster Moonwatch Co-Axial Master Chronometer Moonphase Chronograph (the name is so long it almost tires my fingers to type it out each time) see our previous hands-on article of the fuller collection linked to above. 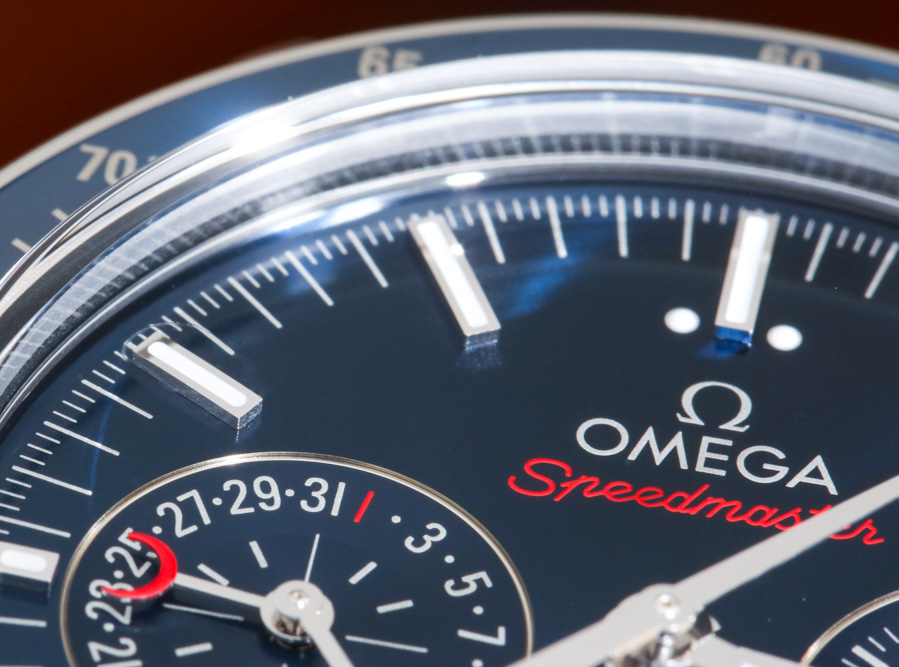 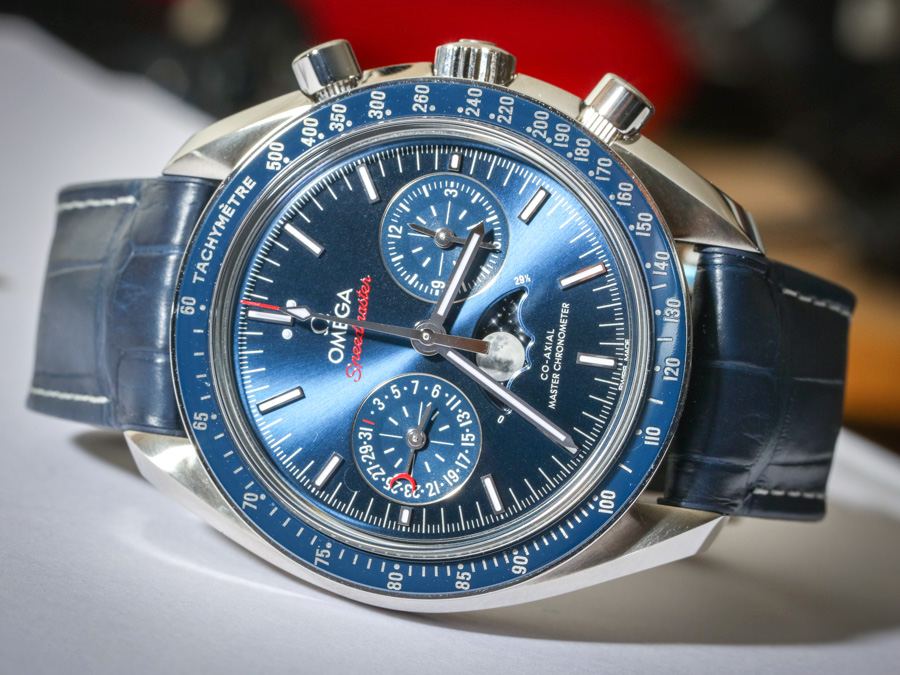 This particular reference 304.33.44.52.03.001 version of the watch is in steel, on a blue leather strap. You can also get this same watch in a more classic black dial also on a strap, or on a more “traditionally Speedmaster” steel metal bracelet. The case is 44.25mm wide and certainly on the thicker side at about 16mm. This new generation Speedmaster case is easily among the most interesting “classic-style” watch cases I know. The reason I say this is not only because of how it is constructed but because looking at it from different angles can vastly change what it looks like in a way I’ve never experienced from any watch before. 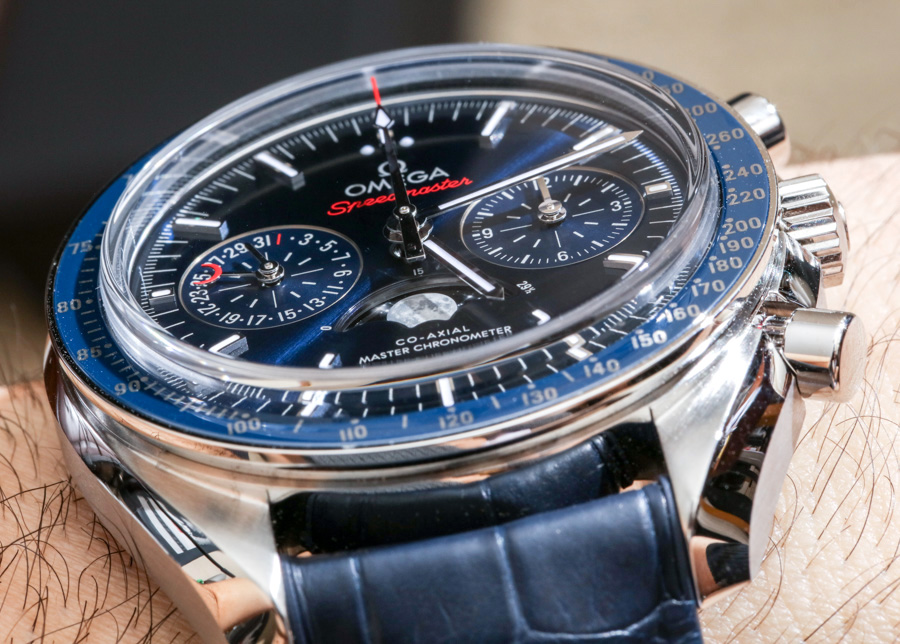 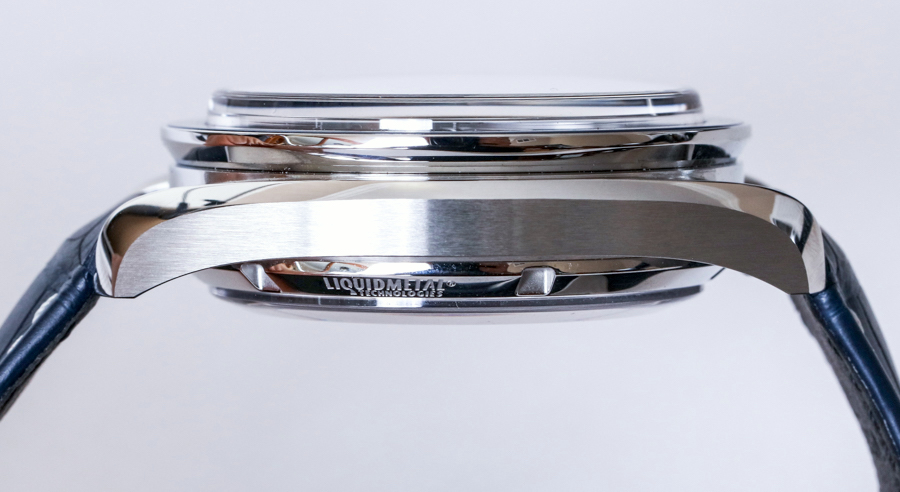 A lot of this has to do with the sandwich-style construction of the case, as well as the fact that the various parts (bezel, middle case, caseback) are of different widths. Despite the size, the case is overall very comfortable (if worn snugly) and attractive on the wrist, and its details do merit close inspection. The case is water-resistant to 100 meters and has a sapphire crystal on both ends, with a display caseback offering a view of the handsome in-house-made movement.