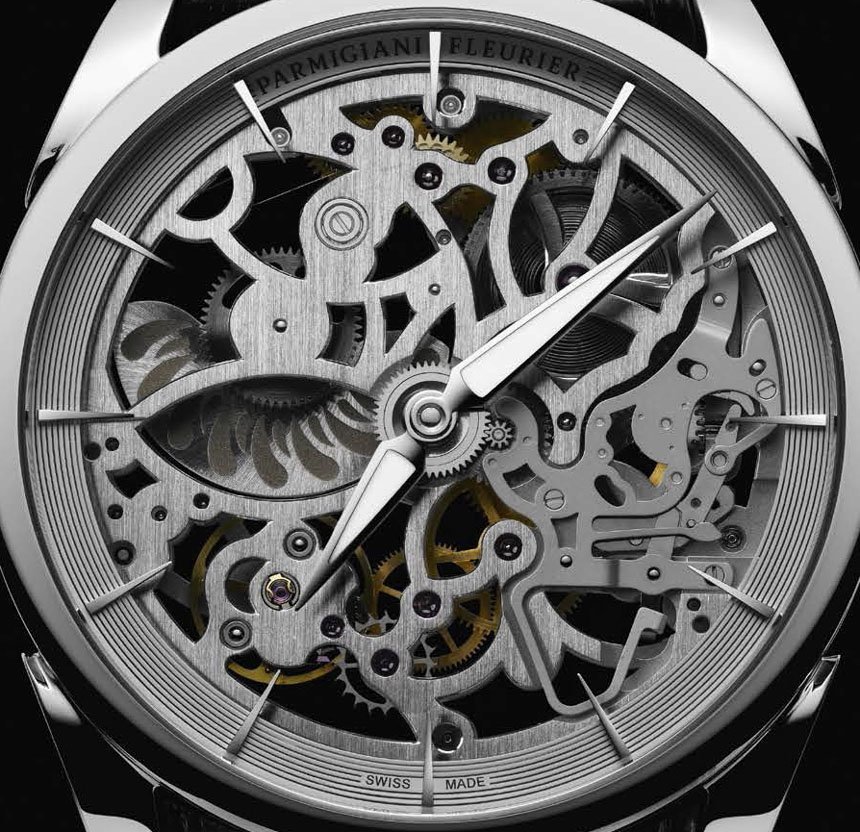 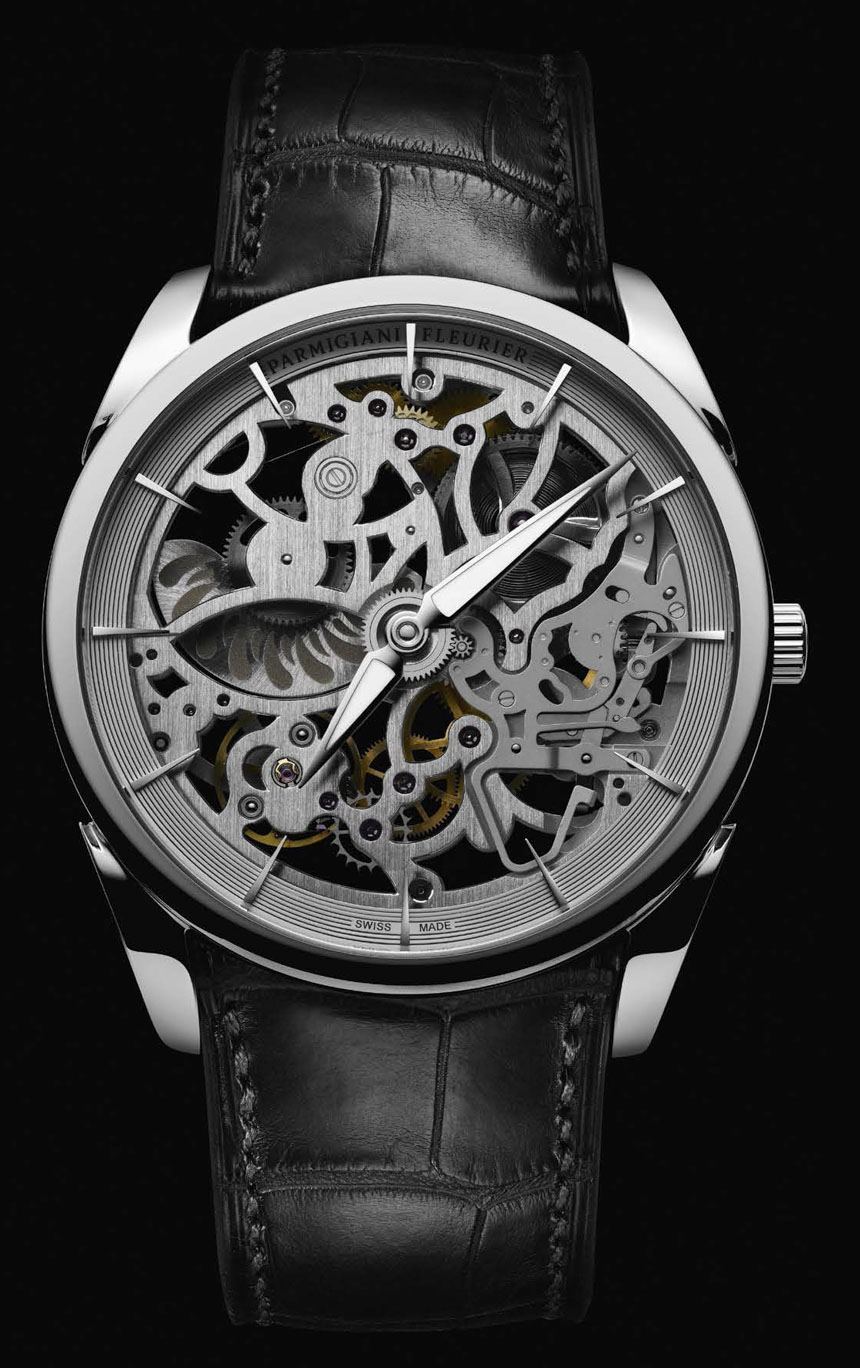 Now, Parmigiani jumps on the skeletonized-thin-dress-watch boat, with their Parmigiani Tonda 1950 Squelette – a rather handsome new timepiece that will be debuted at SIHH 2015, with a version for men and another for women. aBlogtoWatch originally debuted the Tonda 1950 back when Parmigiani released it in 2010 here. Agreeably attractive, the graceful shape of the Parmigiani Tonda 1950 combined comfort, legibility, thin-size, and a superb in-house automatic movement with a micro-rotor.

At 39mm wide, the Tonda 1950 is, and was always, considered a unisex watch. Parmigiani was never shy about offering it as a women’s piece, when dressed up with a mother-of-pearl dial and diamonds decorating the bezel. 39mm wide is a good size for formal attire such as a tuxedo, but we have always felt that Parmigiani would be wise to release a larger sized Tonda 1950 in something like a 42mm wide case for men who prefer slightly larger watches. The Parmigiani Tonda 1950 fits so snugly on the wrist you barely feel that it is there, but it is true that for certain tastes, it is too small. 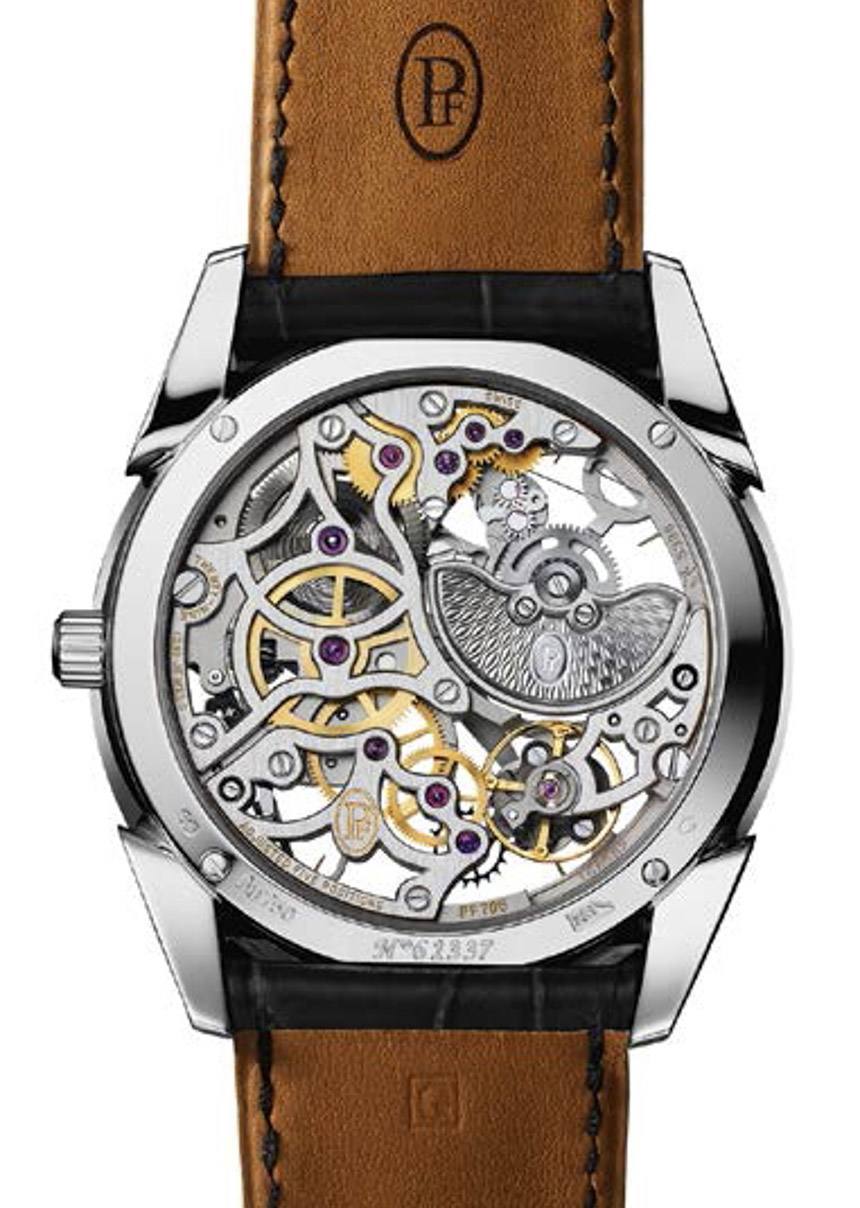 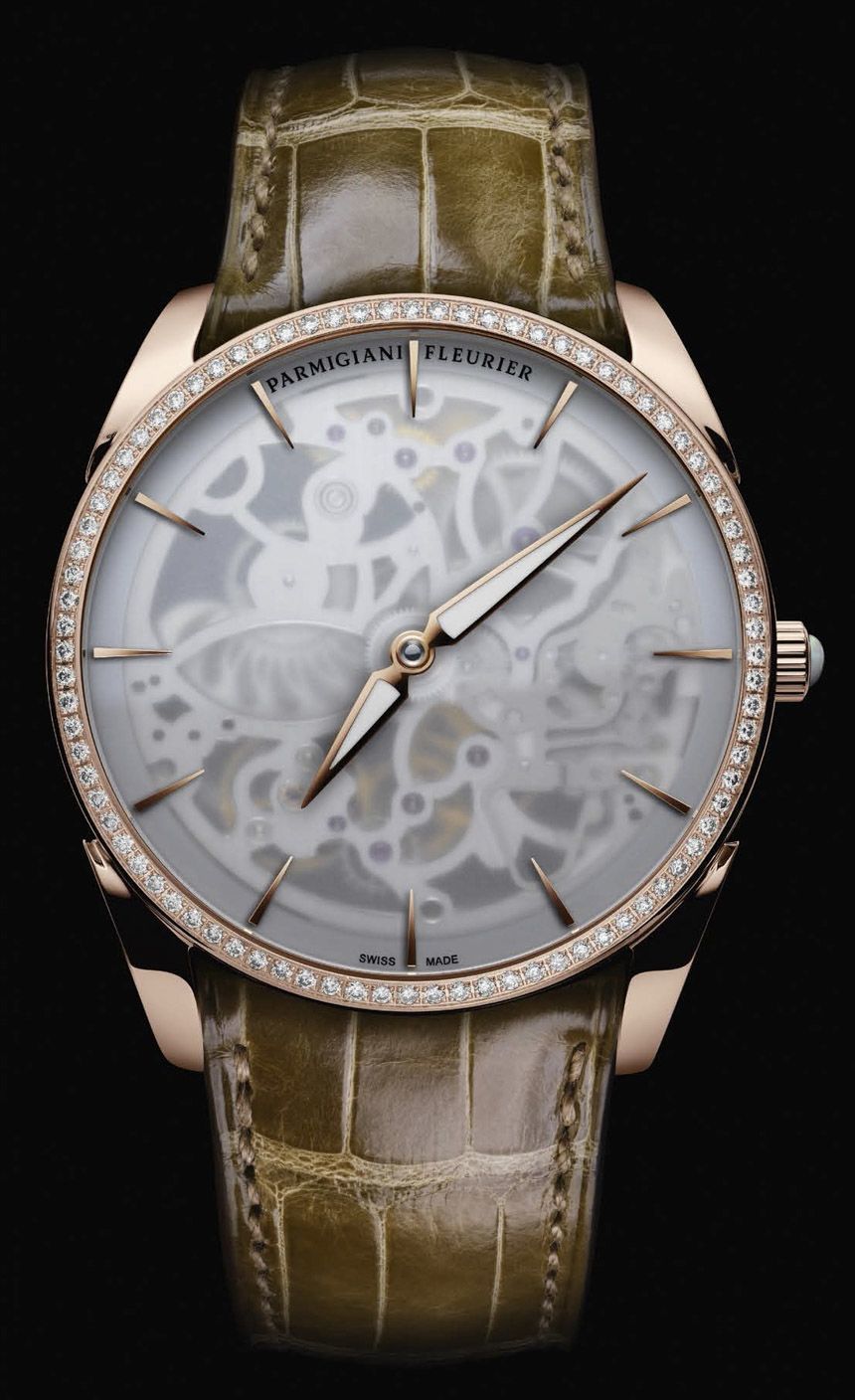 With the openness of a skeletonized dial, the Parmigiani Tonda 1950 Squelette may very well feel a bit larger. Parmigiani has dutifully skeletonized the in-house made caliber PF705 in a modern and attractive manner, and the Parmigiani Tonda 1950 is now a competitor to many versions of the Piaget Altiplano that have skeletonized movements and dials, as well as certain Cartier models. Contemporary trends, when it comes to skeletonizing a dial, tend to result in polished industrial looks that eschew more traditional decoration for evenly brushed surfaces, extra-thin beveled and polished edges, and darker tones such as gray and black. Also, monochrome looks (more or less) are in, versus the more colorful palettes we sometimes see.

Compare, for example, the Parmigiani Tonda 1950 Squelette with the recently featured Armin Strom Skeleton Pure watches (hands-on here). Each of these offer this more modern approach to movement skeletonization that I am referring to above. Then contrast them with something like the also new Glashutte Original Senator Manual Winding Skeletonized Edition watch (hands-on here) that features more traditional skeletonization and bridge decorating techniques – but simply does not feel nearly as contemporary by current tastes. Even within the world of movement skeletonization, there is so much variety.

The caliber PF705 is just 2.6mm thick (the entire watch case is just 7.8mm thick) and is composed of 144 parts. It operates at 21,600 bph (3Hz) and has a power reserve of 42 hours. For these Parmigiani Tonda 1950 Squelette models Parmigiani decided to remove the subsidiary seconds dials and leave just the hour and minute hands. What is interesting is that the micro-rotor is visible through the front of the watch and it is the only element on the movement which can be said to bear some decorative engraving on it. While the men’s version of the Tonda 1950 Squelette has an open dial (still with hour markers for legibility), the women’s version is a bit different.

Also containing a skeletonized caliber PF705 movement, the women’s Parmigiani Tonda 1950 Squelette has an interesting frosted sapphire crystal dial that offers a view of the movement but in a much softer way. While the 39mm wide men’s version comes in an 18k white gold case, the women’s model has an 18k rose gold case which has a bezel decorated with 84 diamonds (about 0.646 carats). Both the men’s and women’s version of the Parmigiani Tonda 1950 Squelette watch come on Hermes alligator leather straps. Price is $43,450 for both models and availability is slated to be March 2015. parmigiani.ch