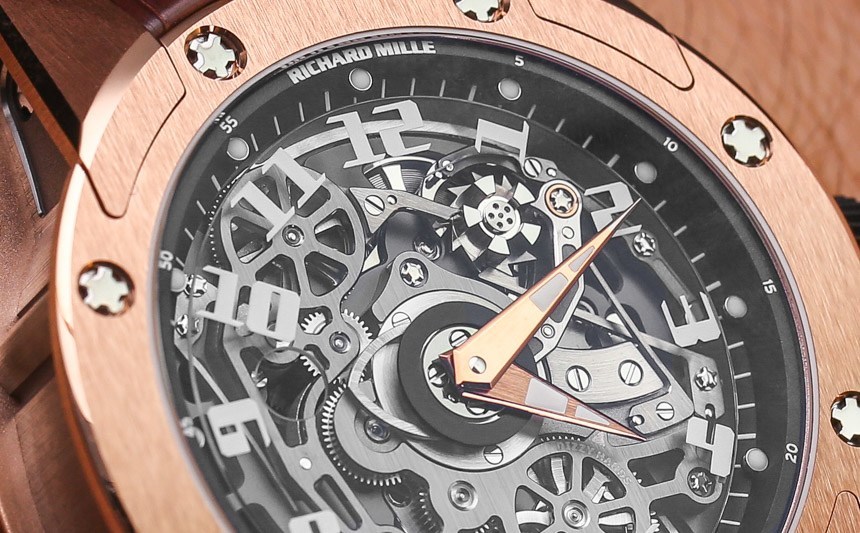 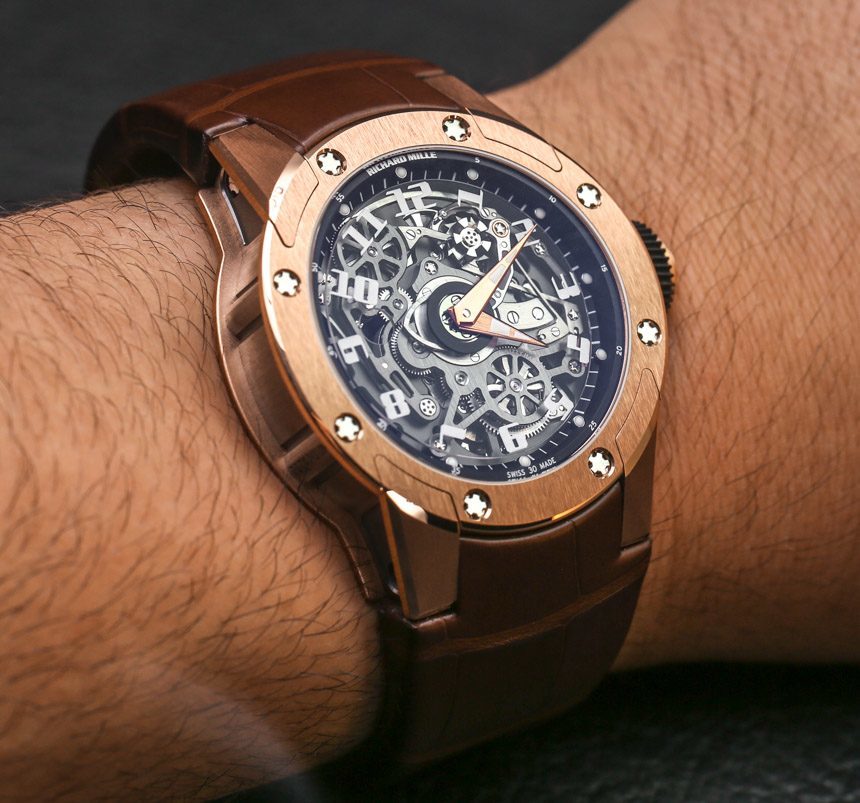 When we hear about a generally a utilitarian sort of accessory – like, for example, a watch – that has had an “artistic vision” applied to it, we groan internally; well, I do, that’s for sure. These generally take the form of something rather garish, in the attempt to make the “art” part eye-catching – with the watchmaking part taking a back seat. But what if the artistry was actually subdued to the point of being hidden and was in fact highly mechanical? Every once in a while we see this promising combination happen and that is precisely what we have with the Richard Mille RM63-01 Dizzy Hands. 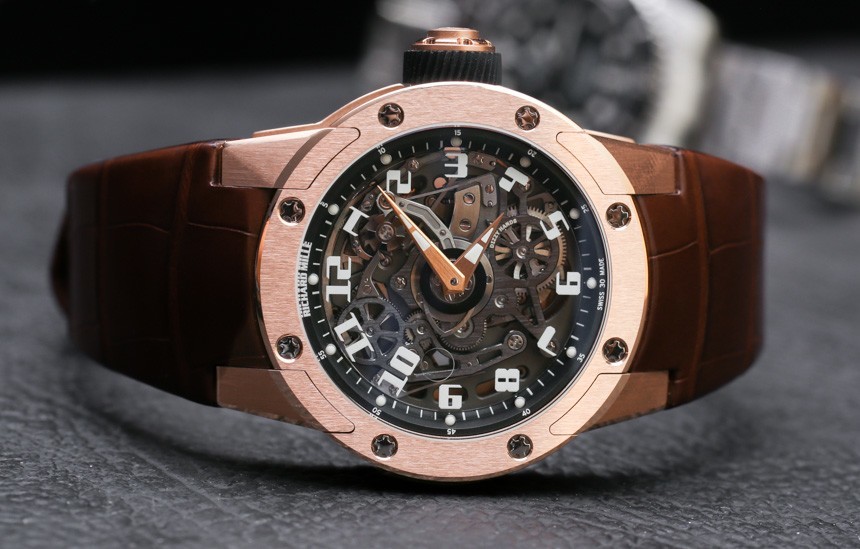 After the first look at the watch, you would not think that there is much all that different about it. Aside from the more unique layout of the indices on the dial, this looks simply like a well-executed Richard Mille skeleton watch – quite restrained, by Richard Mille standards. However, a closer look at the dial starts to reveal what is unique about this piece.

If you look at the 1 o’clock position, you will see that there is a column wheel hiding in plain sight. Of course, we more regularly see these in chronograph movements – so did they manage to hide a chronograph complication in here somehow? The answer is no, but there is a pusher in the crown via which the column wheel can be advanced, so as to initiate a rather unusual mechanism. 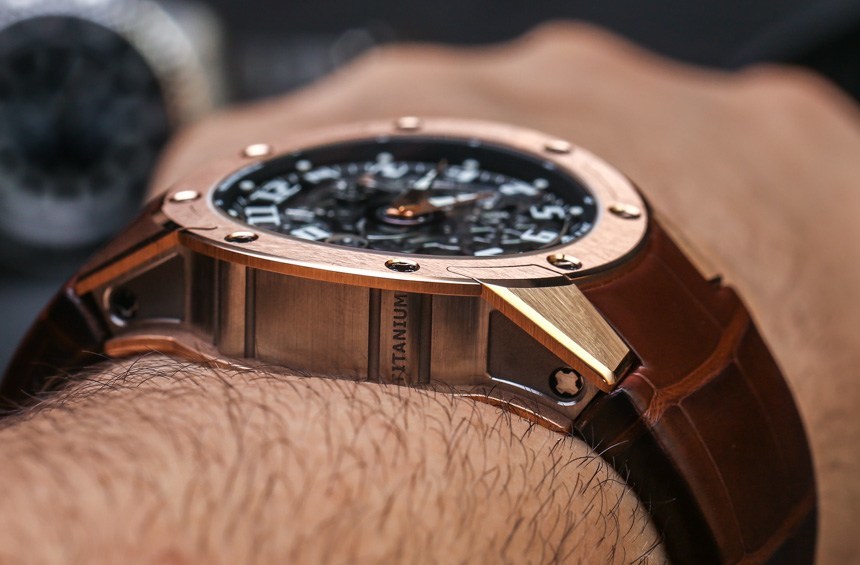 What happens is that as the mechanism starts to function the sapphire crystal dial (on which the numerals reside) begins to rotate counter-clockwise while the hour hand proceeds clockwise, at a different pace – and this is where the artistry comes in. Essentially, the point is that such “destruction” of the accurate indication of time should set you free from the limits of time and allow to proceed at your own pace. From a more down-to-earth approach this clearly is another, unique “tour de force” in mechanical engineering, something that they did because they could and not because it was in any way particularly necessary or useful – but we are already used to seeing Richard Mille doing that.

Nevertheless, while it first and foremost is a creative watchmaker stretching its muscles once again, this time this extra complication has a more philosophical approach, where actual usefulness – in the more traditional sense of the word – gives way to something Swiss brands prefer to refer to as “poetic.” And once we think of that way, a somewhat similar concept springs to mind: that of Hermès who, with the Le Temps Suspendu (article here), allowed the wearer to “suspend time” by snapping the hour and minute hands at the 12 o’clock position at a press of a button while the movement kept on tracking time – allowing the hands to display the correct time at any moment when the button was pushed again. 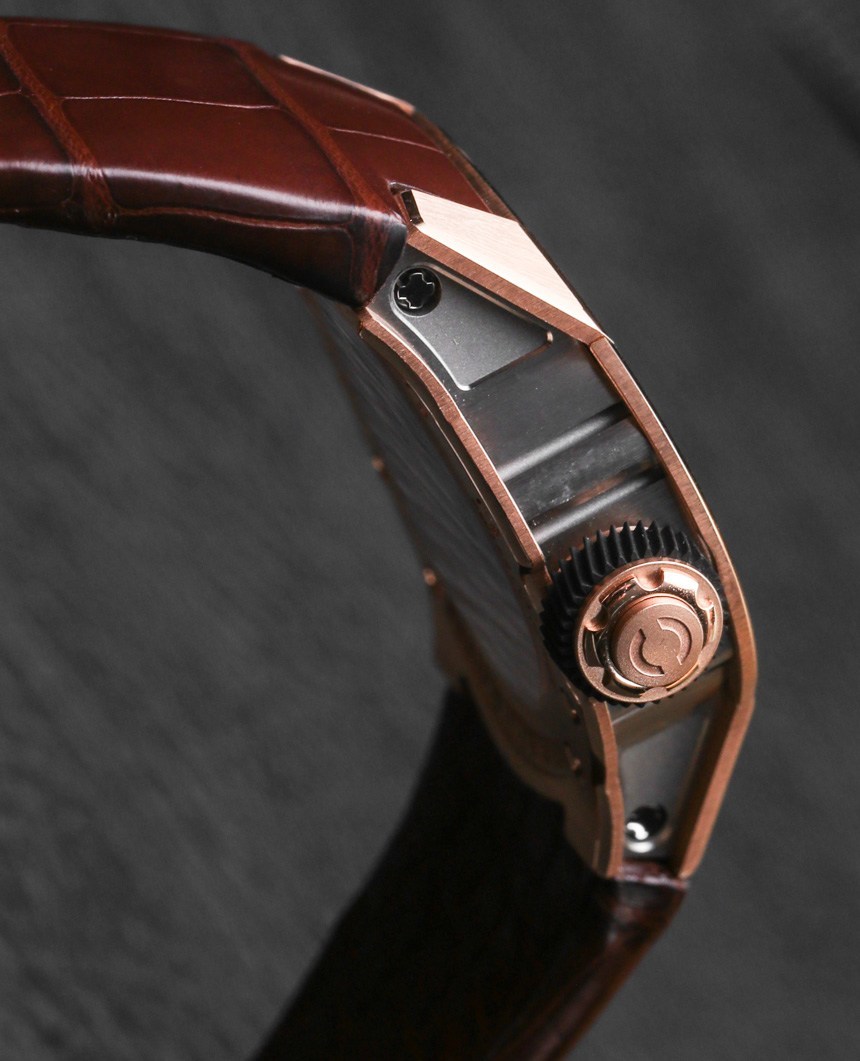 One has to admit: creating a watch to intentionally not be able to tell you the time is a rather bold move. The Richard Mille RM63-01 Dizzy Hands does just that, and where it primarily differs from Hermès’ offering is that it does so in a more animated way. Richard Mille says that for this 2014 SIHH novelty they drew inspiration from the opening line of a French poem, Du Temps. The translated line is as follows: “Time does not surprise the wise, but of Time the wise laughs, as only he knows how to use it.” 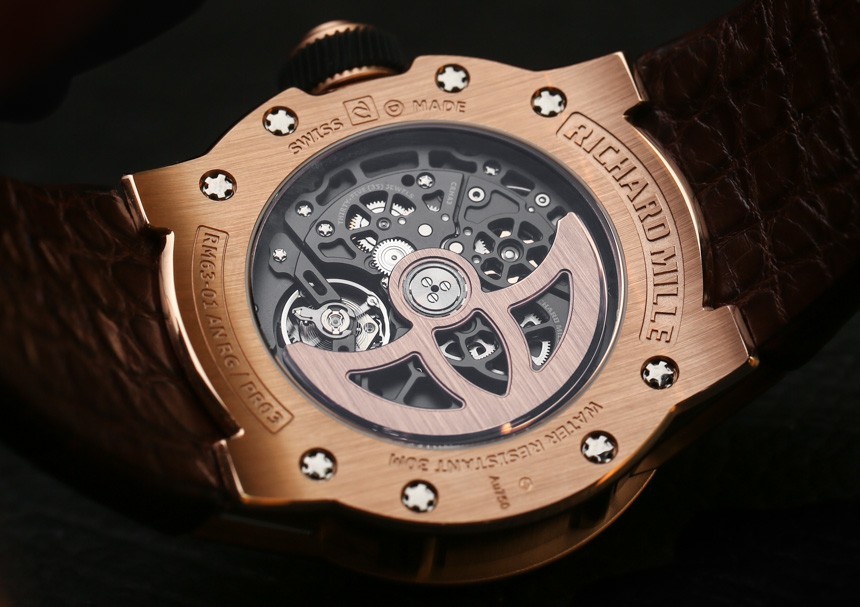 Taking things one step further, the Richard Mille RM63-01 Dizzy Hands is allowing you to perhaps not just use time (or timekeeping, as it were), but rather to break it, at your own will. When you are ready to escape the inexorable marching forward of time, just depress the pusher and you are freed from knowing exactly how long you have been whiling away the hours – just be sure to turn your phone off as well. Once the excursion is done, the second press of the pusher activates the hammer at 3 o’clock, which puts the watch back to its regular timekeeping mode. 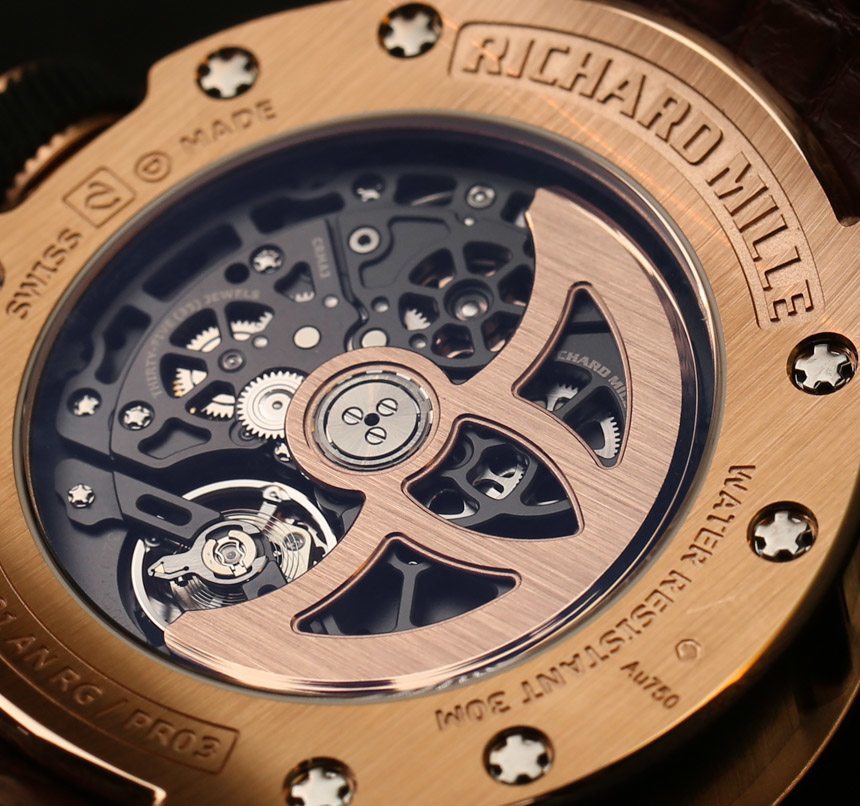 Normally, a concept like this would not really appeal to me, for much the same reason that I am generally not a fan of single-handed watches: I like to know the exact time that I am at, not some vague approximation. With this watch, it is something of a different beast. It adds an extra element of surprise to looking down at your watch to determine how much time has surprisingly slipped away – and you can also always have the accurate, two-hand indication when you need it. 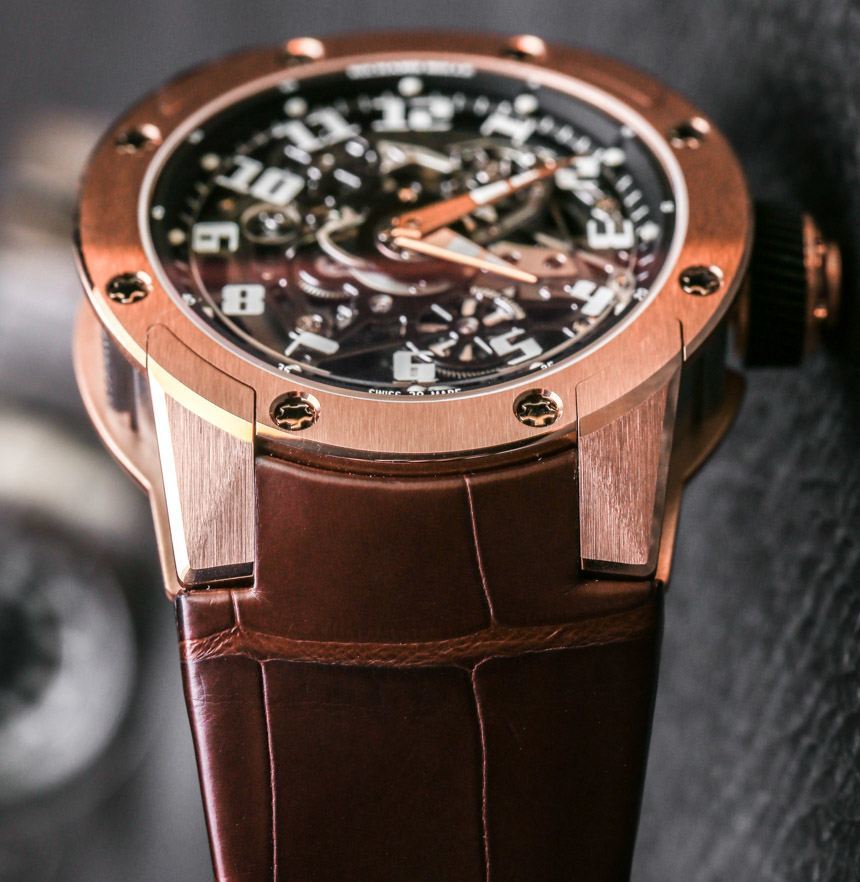 Not to mention, seeing the Richard Mille RM63-01 Dizzy Hands in motion certainly is a treat. Visually, the watch is rather striking (and is quite readable for a skeleton, with the bold indices and nicely contrasting hands giving the exact time at a glance); once set into motion though, I think I would have a rather difficult time not watching things spin round and round. 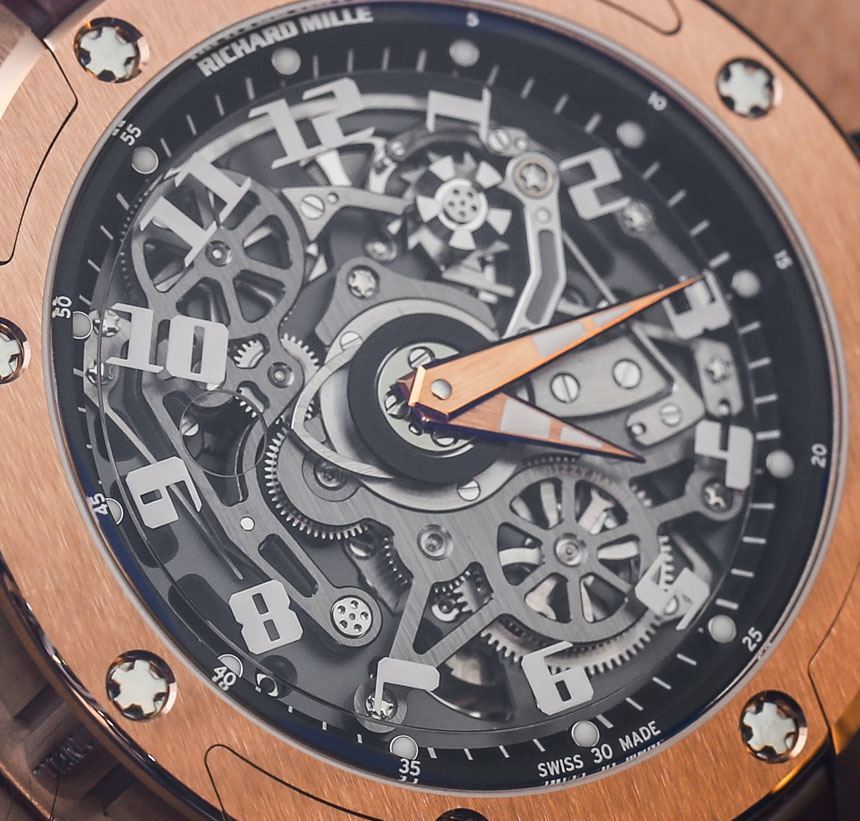 Once (or even if) you get past that you then, of course, have all the other details of the watch, such as the three-part, 42.7 millimeter wide case in rose gold, which would surely demand its fair share of attention. Should you be ready to become a time lord and set things all wibbly-wobbly, the Richard Mille RM63-01 Dizzy Hands can be yours for a price of $120,000. richardmille.com