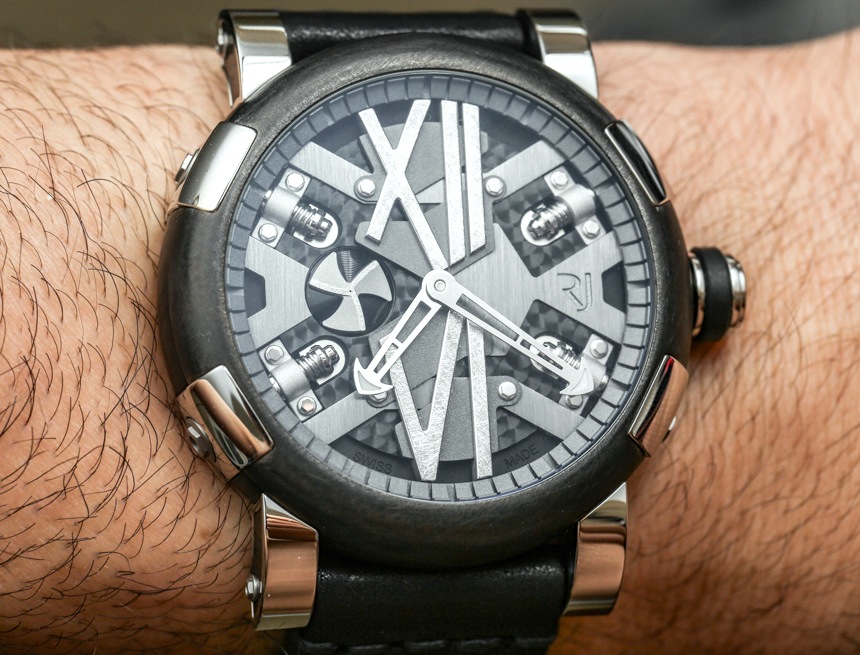 When Romain Jerome came out with the Steampunk Auto 46 watch collection, I barely noticed. There have been seemingly so many versions of the Steampunk watch, that I didn’t really see too much difference about this particular new collection. In fact, the most “unique” element of it (at least this particular version) is the use of mostly gray tones with “gunmetal” and polished steel. Many of the Steampunk models (which evolved from the Titanic-DNA collection) feature Romain Jerome’s special rusted steel which has a brownish tone and is often used for the bezel. So just to compare, notice how, while the Romain Jerome Steampunk Auto 46 is in the same family as the Steampunk Chrono (aBlogtoWatch review here), it has a distinctive look. 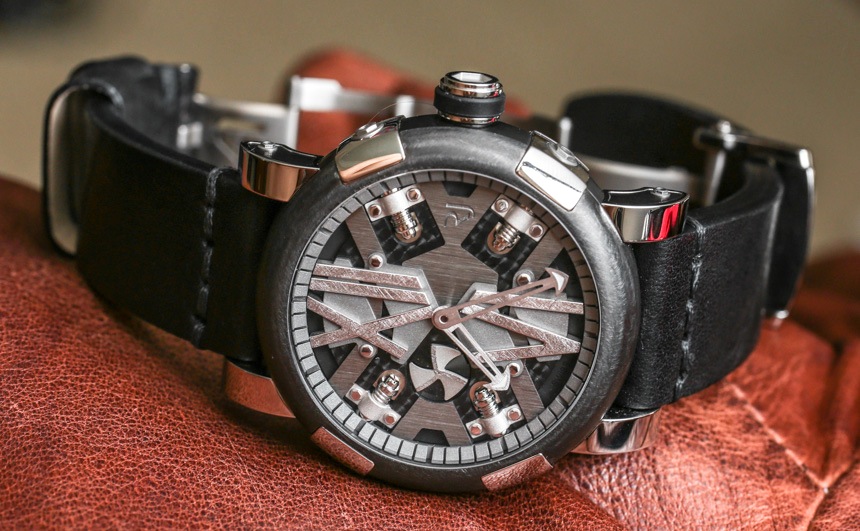 As a sort of entry-level model in the Steampunk watch family, the Romain Jerome Steampunk Auto 46 is actually surprisingly desirable – at least, it was for me. Actually, on a larger scale, I find that many people have that feeling with Romain Jerome in the first place. While they might not have any love for the brand based on pictures, after putting a few on, they quickly develop an appreciation for at least some of the brand’s products. It is certainly niche, but you have got to love RJ for having the courage to do what so few luxury Swiss watch brands would ever do. 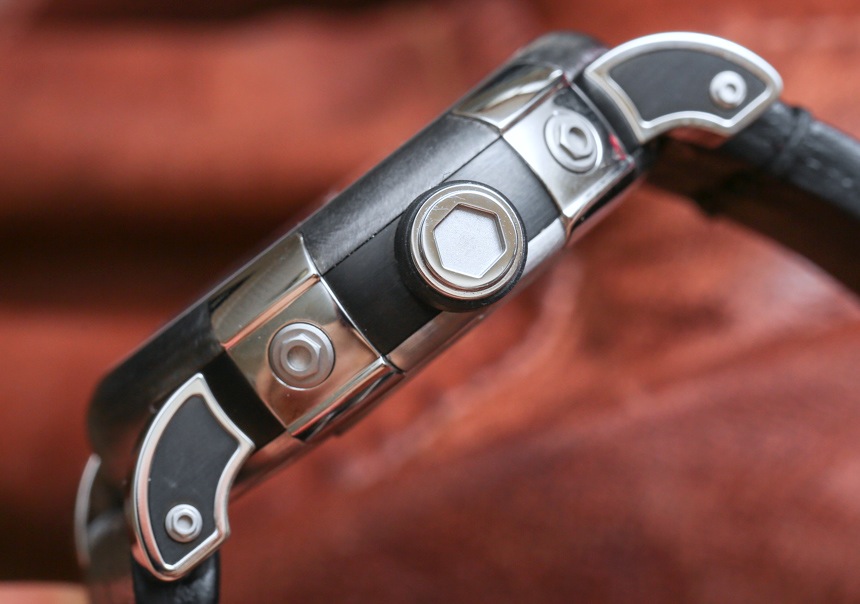 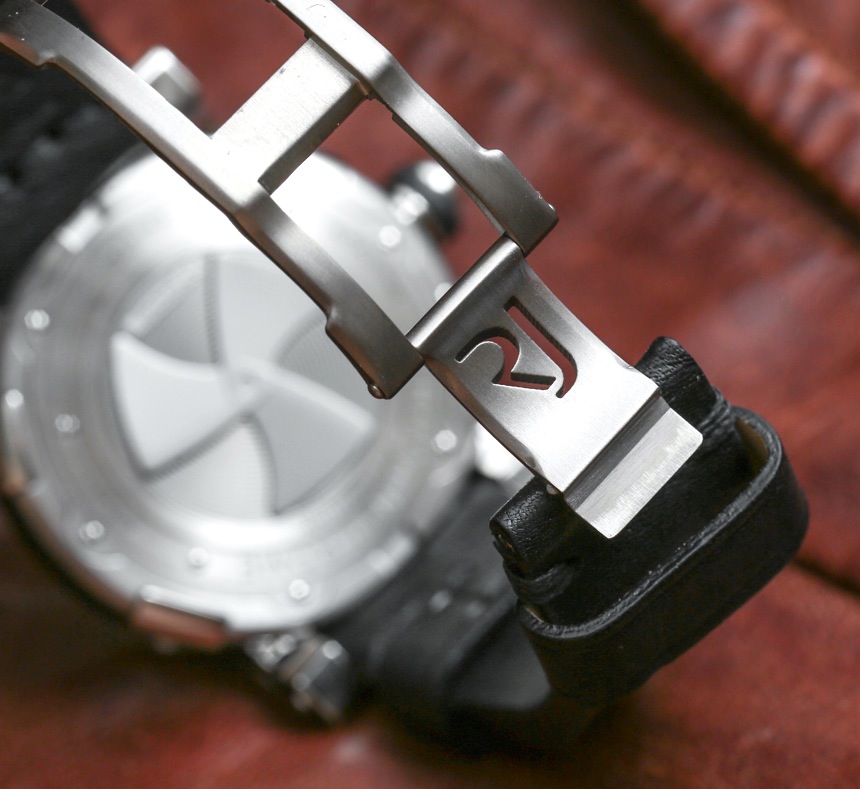 For me, the Romain Jerome Steampunk Auto 46 is a sort of “modern steampunk” given the metal colors and overall design. The watch feels like a prop out of some post-apocalyptic Hollywood movie more than it does “Victorian sci-fi” (which is the basic theme of most “traditional” steampunk items). I could easily see something like the Romain Jerome Steampunk Auto 46 being worn by a character in Max Mad Fury Road. What do you think? 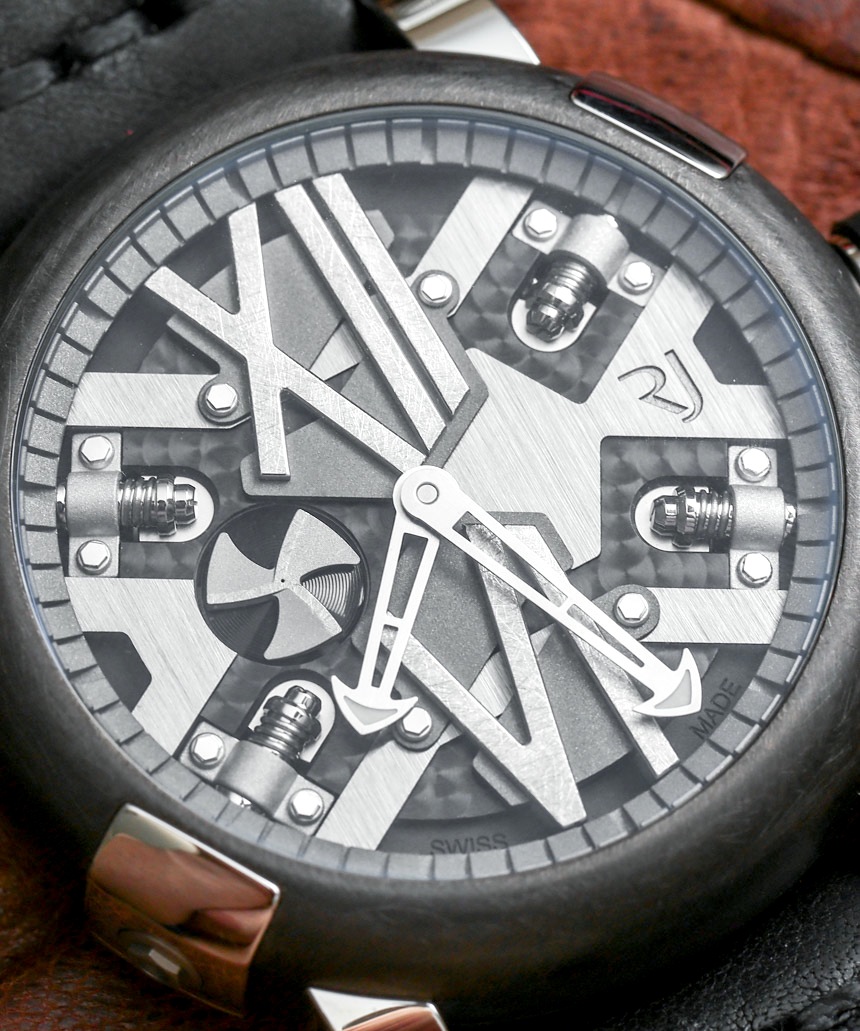 I didn’t realize that I liked the watch as much as I did until I noticed that I was grabbing for it a lot more often than other watches. I would almost never prefer such an avant-garde design for daily wear when put up against, say… a classically designed sports watch with a much more simple dial. Yet, something about the Romain Jerome Steampunk Auto 46 kept calling to me. What was it? 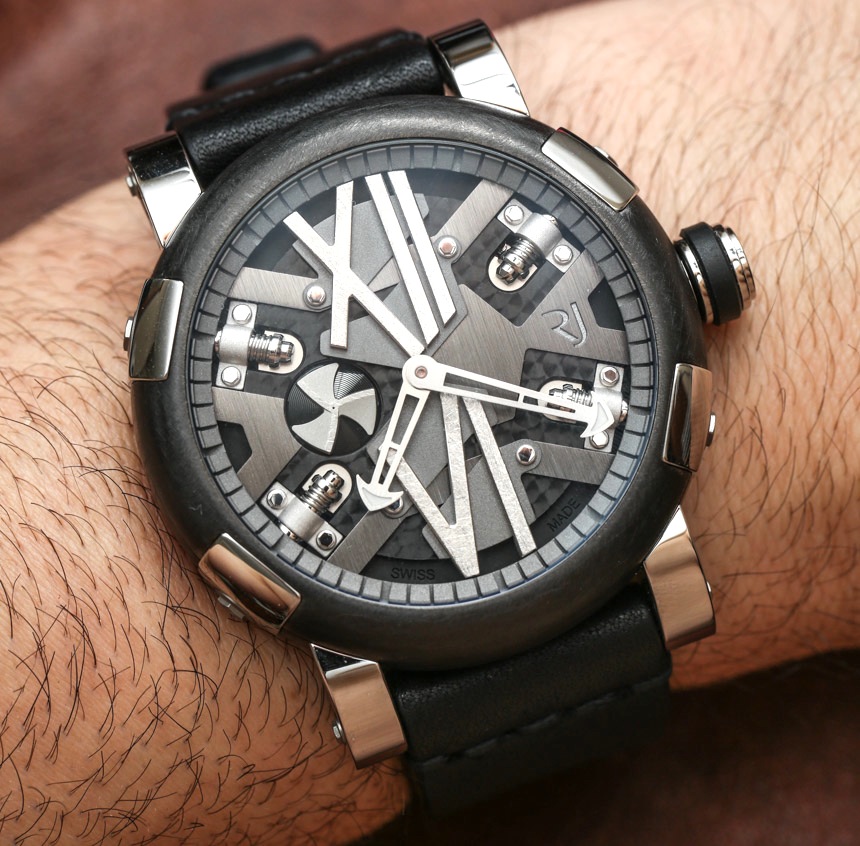 It is entirely possible that the Romain Jerome Steampunk Auto 46 and I simply had “good chemistry.” Whether by design or accident, a lot of little things in the watch fit me very well. For example, the 46mm-wide case and strap happened to fit extremely comfortably on my wrist. Was this by design? Well, yes and no. The Romain Jerome Steampunk Auto 46 is not that much different than other models in the Steampunk collection that fit fine, but not particularly that well, so what was unique here? In fact, given the more simple movement, the case is actually a bit thinner, I believe, and the strap is a bit different. These two small elements might not seem like much, but for my particular physiology made the difference from the fine but clunky fit of many RJ Steampunk watches to something that I could easily forget was on my wrist. 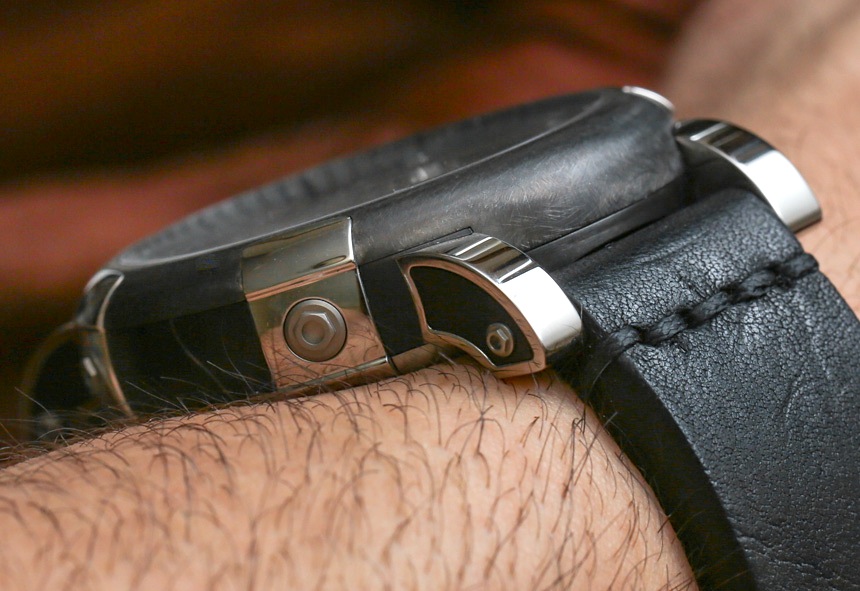 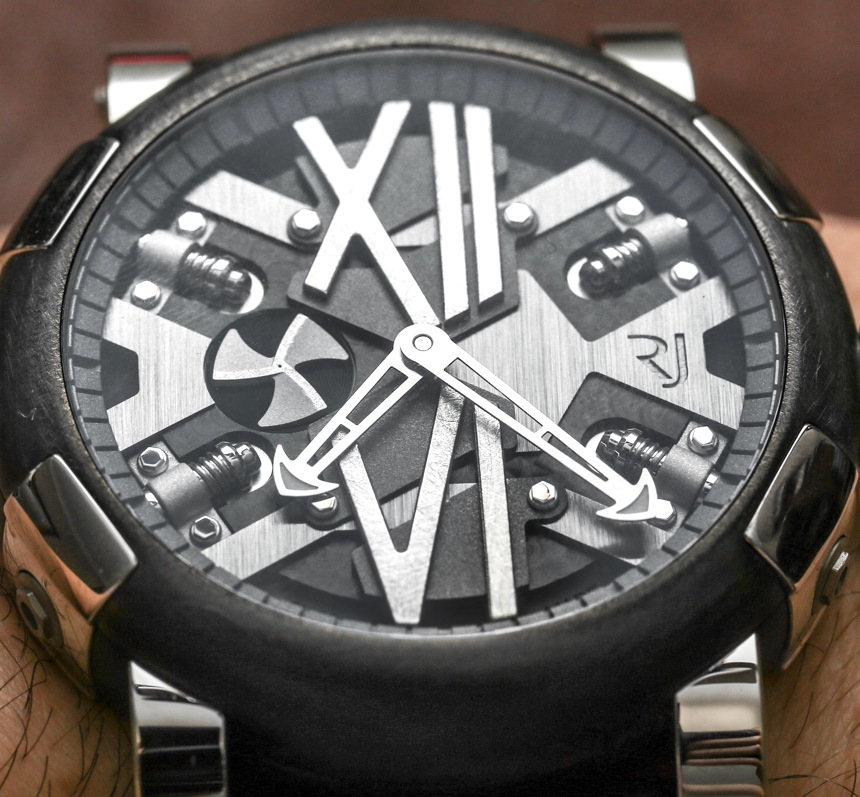 Moreover, despite the relative insanity of the dial, I found the Romain Jerome Steampunk Auto 46 to be rather legible. This is something that would be very difficult to glean from images alone. In fact, if judging just the images, it would be safe to assume that the watch (at least this version) is mostly illegible given that the hands are the same tone as much of the dial (yes, there is a little bit of luminant on the tips). Nevertheless, the matte finishing of the hands and the discreet hour and minute markers on the periphery of the bezel make this a decent time-teller as well as style item for the wrist. 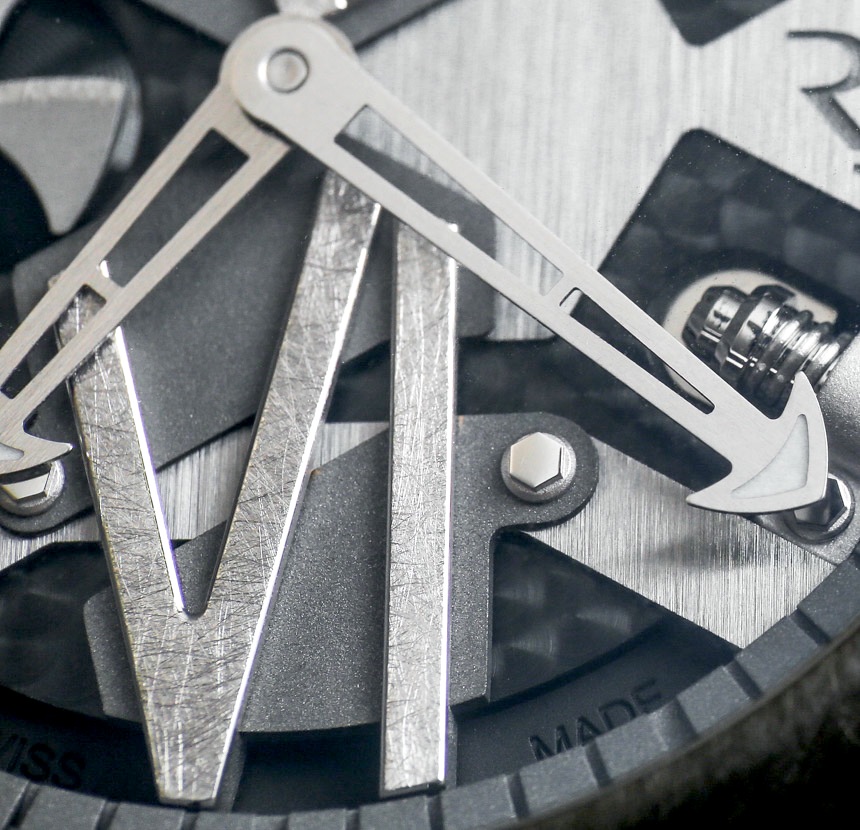 Unless you simply hate the industrial look of the dial and case design, the Romain Jerome Steampunk Auto 46 is very cool. There is a place for rusted metal in luxury watches, sure… but its removal in this particular Steampunk watch is actually appreciated for a change. The polished lugs and case “claws” lend themselves well to a more substantial look, and the deep gray gunmetal finish of the bezel works nicely with the various shades of gray on the dial. If there were ever a timepiece that is truly “50 shades of gray,” then it is this Romain Jerome Steampunk Auto 46. 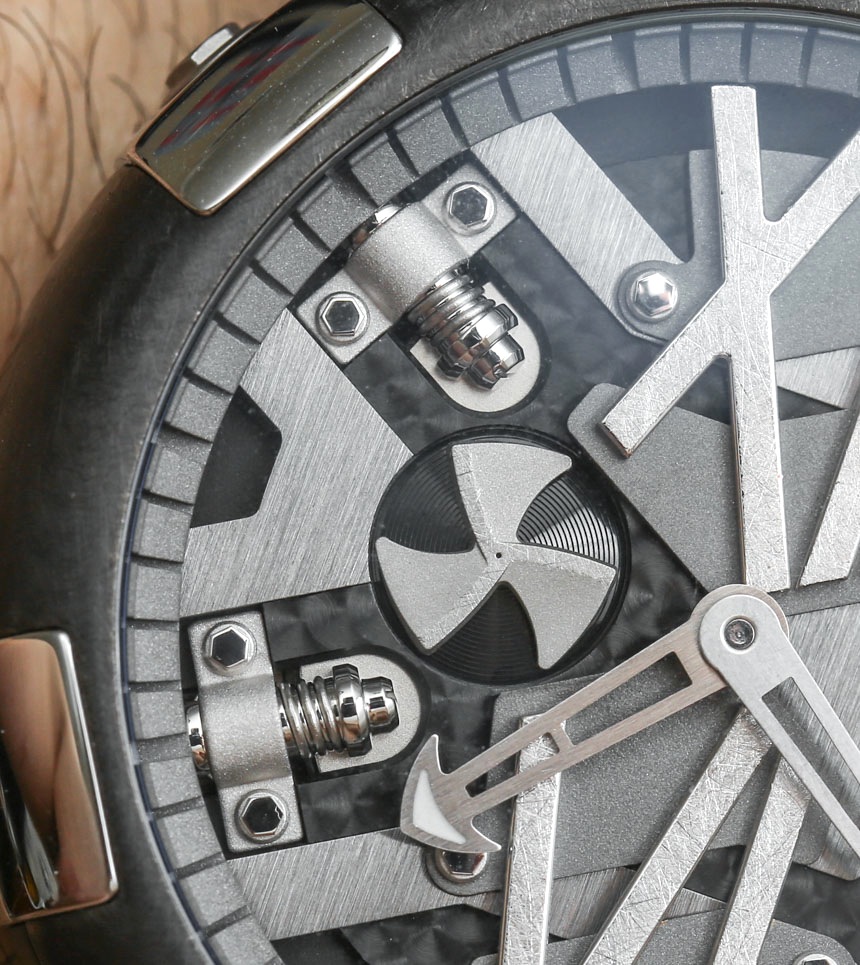 I can sympathize with those who just don’t see a place for “novelty art” dials such as this on timepieces. I don’t agree with them, but I do appreciate their perspective. The enduring irony of many Romain Jerome watches is that while they look like “tools,” very few (if any of them) are actual “tool watches.” A tool watch implies it is less about form and mostly about cold hard functionality, durability, and “purpose.” The mechanical industrial theme of the dial and case (which began as the Titanic-DNA, as I mentioned above) is a celebration of metal machining and finishing methods. There are a number of ways steel is rendered right there in one watch, and the many screws and various bolts on the dial all add to a macho, machine room look. Very little of it is functional, but it does look interesting and the quality is there. All the dial offers is the time with subsidiary seconds which takes the form of a slowly spinning ship-style propeller.