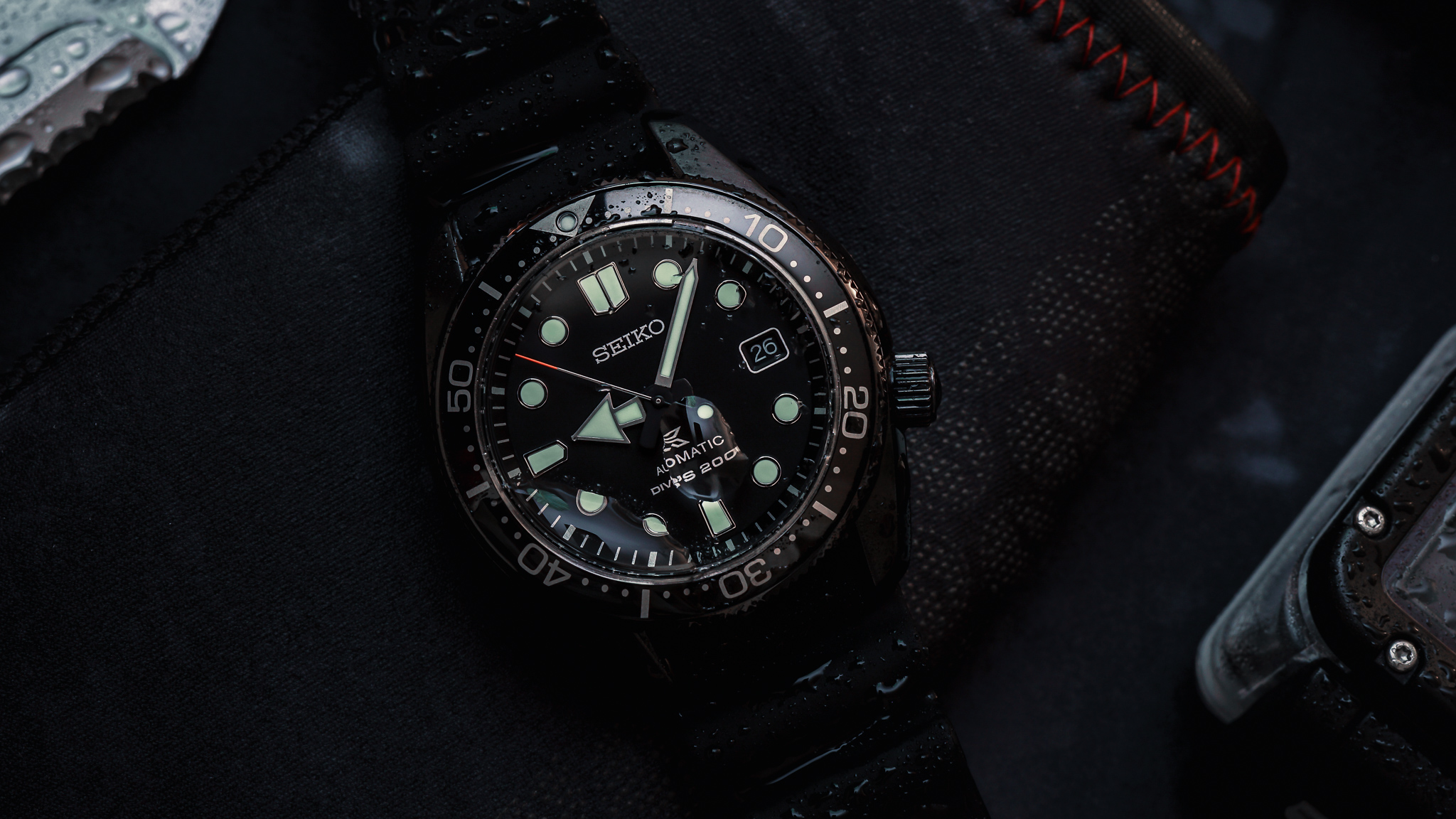 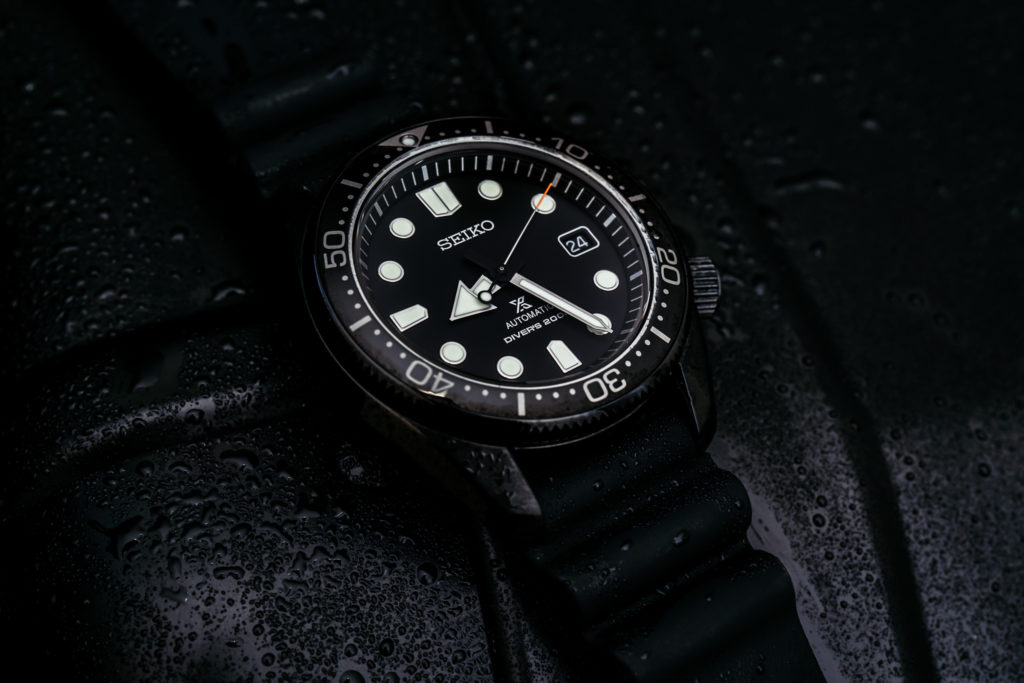 Last time we heard from Topper Jewelers, the Northern California jeweler had just introduced a special capsule collection of Zodiac dive watches, co-designed by KISS drummer Eric Singer. For the retailer’s seventh exclusive brand collaboration (called ‘Topper Editions’), Topper has partnered with Seiko to build a new limited-edition Prospex Diver that iterates on last year’s popular SPB077 reference with a stealthy black finish, and several subtle dial details which create an entire new reference that should very well earn it entry into the Prospex line’s ‘Ninja’ lore. But perhaps even more interesting about this release, is how it marks the first time that Seiko has co-designed a special limited edition watch with a retailer in the United States – and if you use Seiko’s many popular Beams editions as a historical reference point, that could make this particular Topper Edition a very big deal indeed. 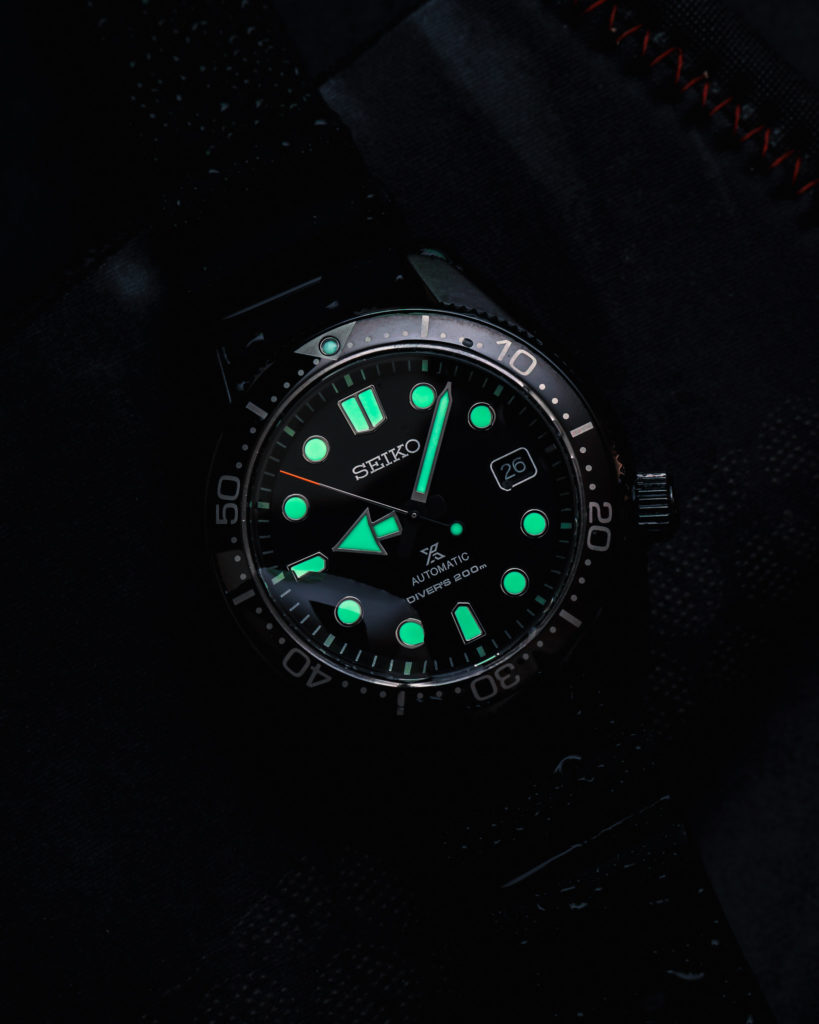 One thing that made last year’s SPB077 (go hands-on with this watch, and its companion SPB079 with the blue bezel and rubber strap) watch so popular was its strong adherence to Seiko’s original Prospex design language, borrowing liberally from the semi-cushioned case shape and dial cues found on the original 6159 Hi-Beat Diver from 1968 (2018 was this reference’s 50-year anniversary, after all). Of course the new reference was modernized a bit with a 44mm stainless steel case, and all of Seiko’s premium Prospex accoutrements: a sapphire crystal, Seiko’s latest Lumibrite luminous paint on the dial and arrow hands, and the 6R15 automatic movement. 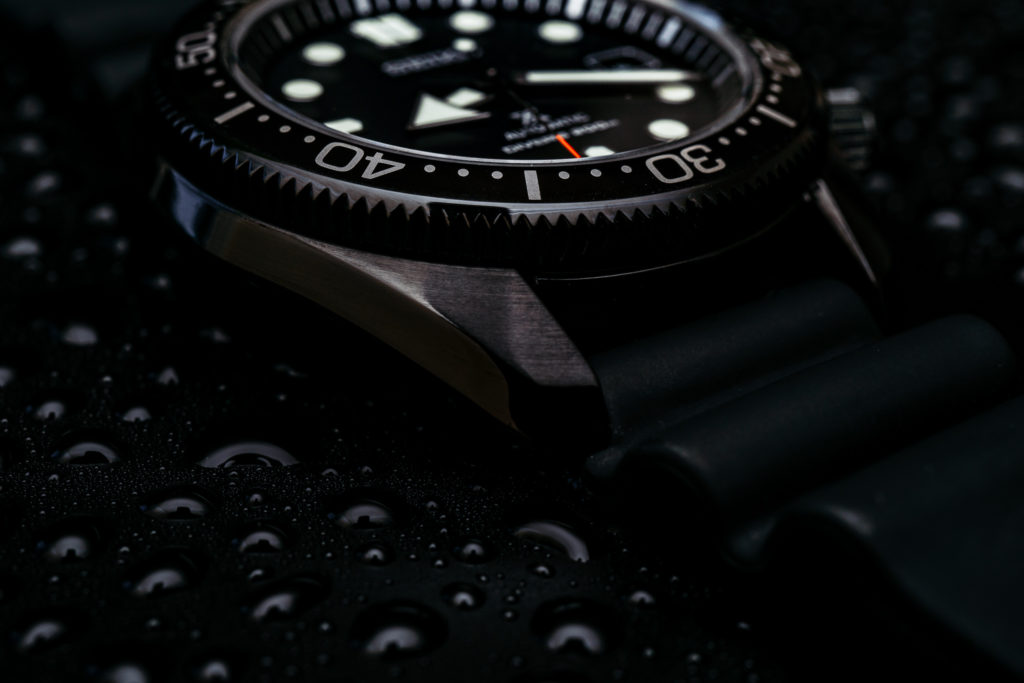 The new SPB107 ‘Topper Ninja’ follows those exact same parameters, while mixing in a few neat details selected by co-owner Rob Caplan based on feedback from Topper’s collector community – now a running tradition for Topper’s special collaborative projects. The black case with alternating brushed and polished sides is perhaps the most prominent difference between the new 107 and last year’s 077 references. However, a trained eye will also note the new orange-tipped seconds hand, which naturally draws the eye to the seconds track along the perimeter of the dial, rather than the luminous meatball counter-balance which orbits the center of the dial where the eyes are usually drawn on standard models – a familiar quirk of Prospex dive watches. 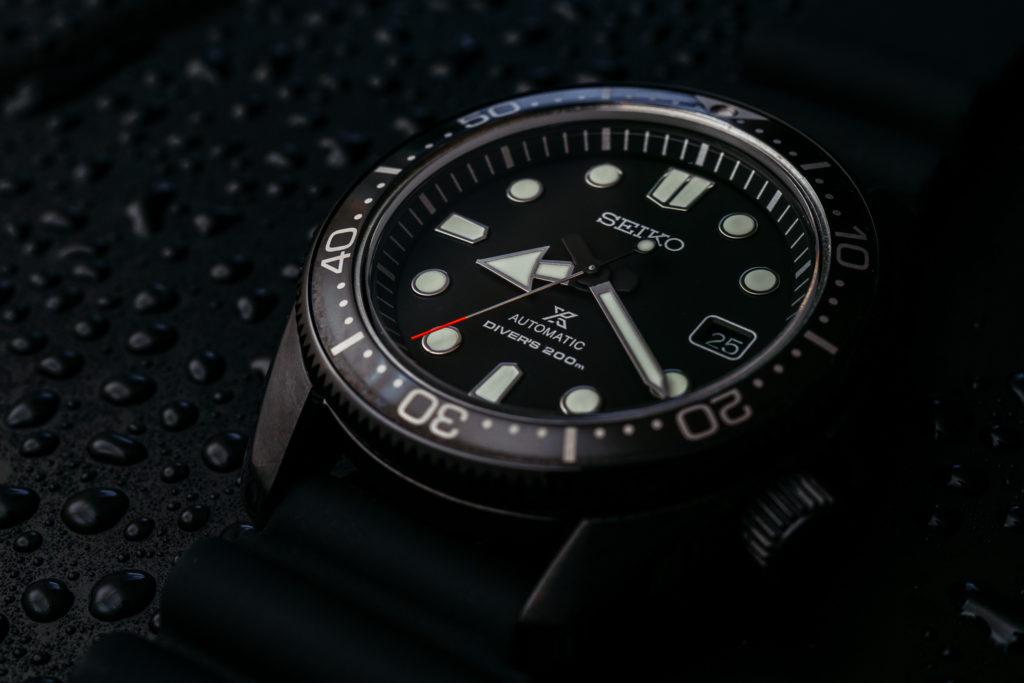 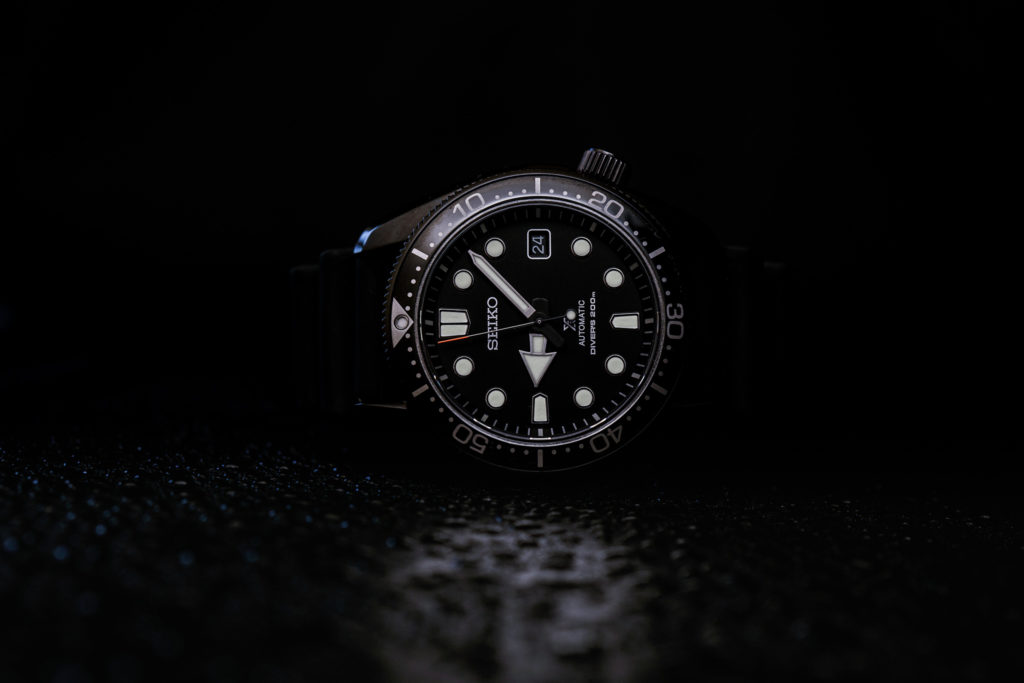 Fans of longtime Prospex classics like the Darth Tuna or Ninja Tuna watches ought to also appreciate how Topper has opted for a color-matched date wheel, yielding a more cohesive, all-black look throughout the watch. Legibility is maximized primarily around the timekeeping elements, and nothing else – and the watch is far better for it. The watch ships on Seiko’s ultra-soft silicone dive strap (measuring 20mm at the lugs), which comes fitted with a burly pin buckle that’s reminiscent of the super-wide buckles found on some Panerai watches. 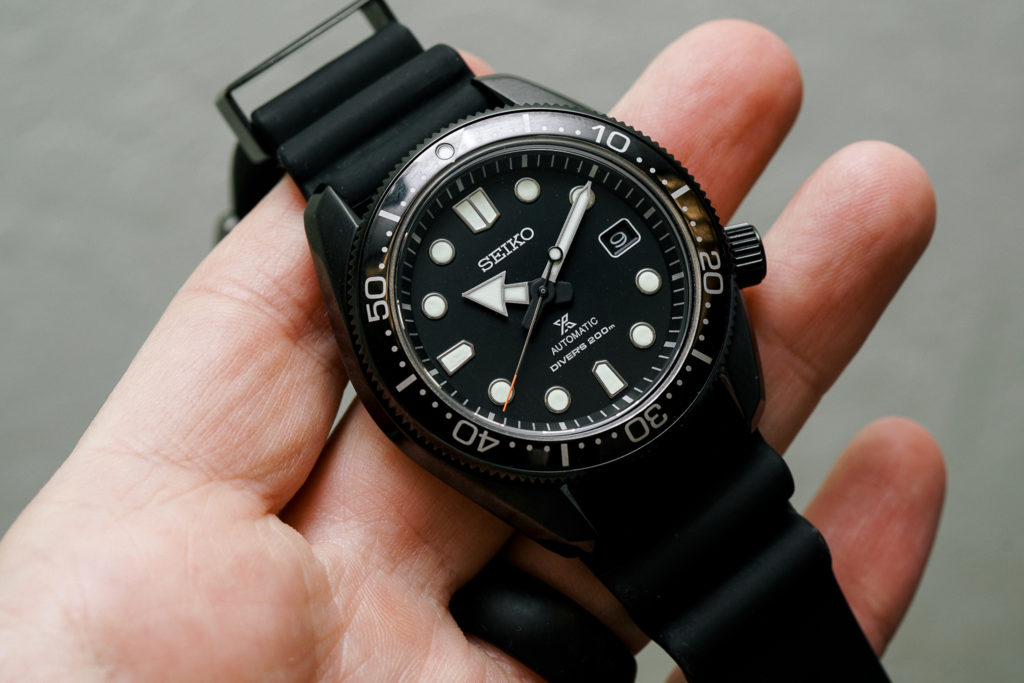 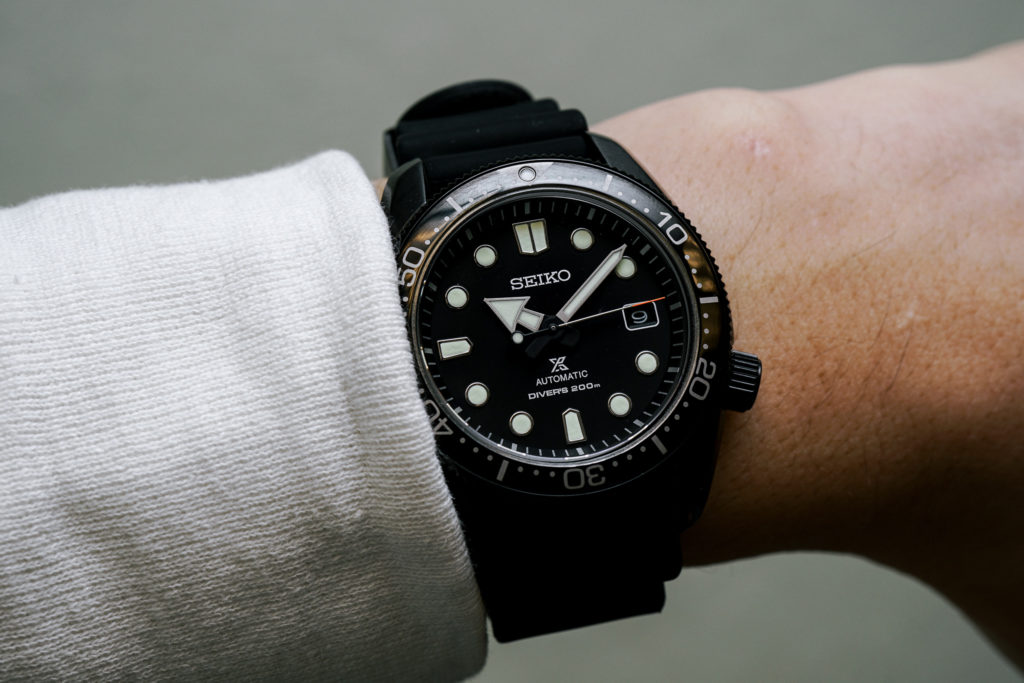 The Seiko Prospex SPB107 Topper Edition on a 6.5″ wrist

On paper, the 44mm case sounds large, but fans of last year’s 077 reference already know it has some of the best proportions in a modern Seiko diver. Comparable to a 2500-series Omega Seamaster Planet Ocean, SPB107 is only 13mm tall, and has a relatively short lug-to-lug length and slightly smaller dial aperture than one might expect, which gives it the wrist presence of a more classic diver wrapped in a slick modern skin. Black watches also naturally tend to resist many of the reflective visual cues found on brushed or polished steel watches, and are thus able to hide on the wrist somewhat – again, the SPB107 doesn’t buck this trend. Better still though, is how its compact silhouette and utilitarian form factor neatly acknowledge the traditions from Seiko’s long legacy of murdered out tool watches, which means it should please even the stodgiest of JDM Prospex collectors. 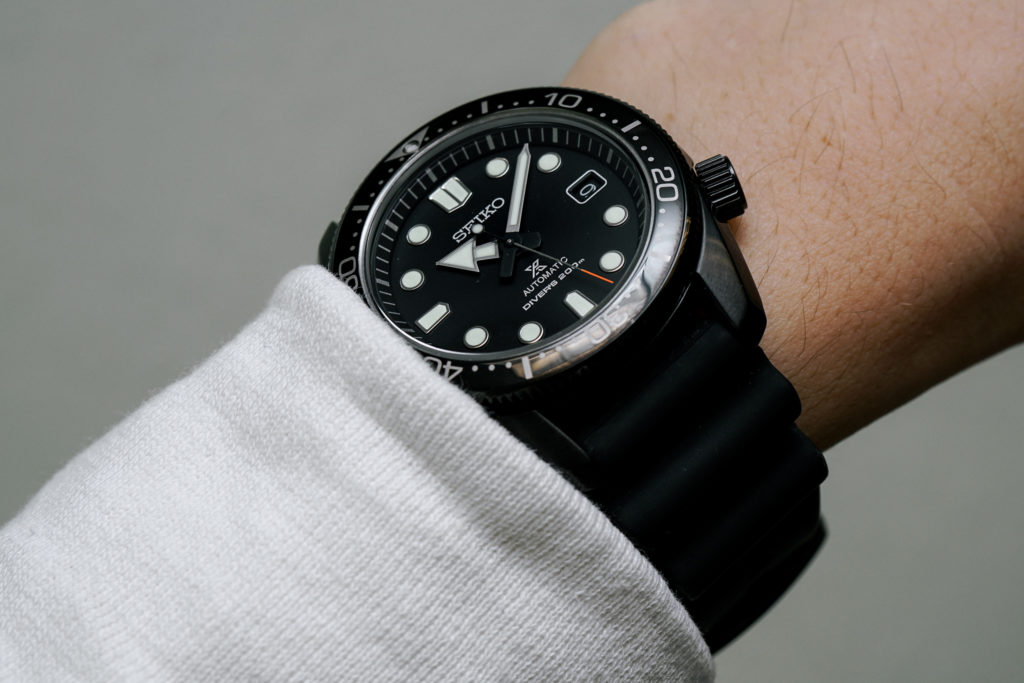 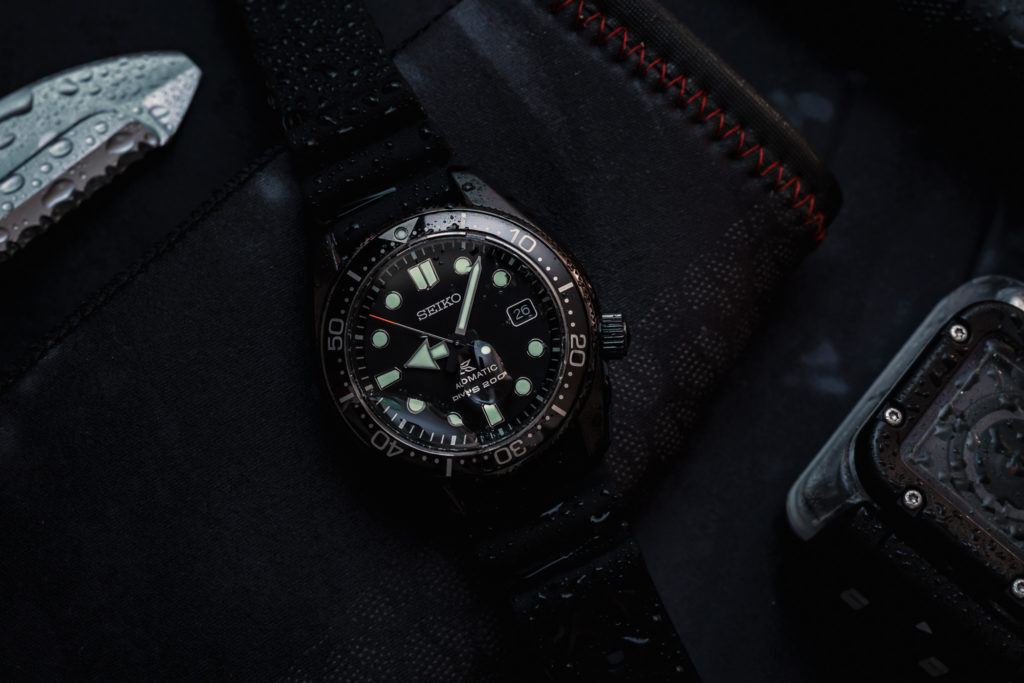 The Seiko Prospex SPB107 Topper Edition is limited to 500 individually numbered pieces (a surprisingly small run for a Prospex limited edition), and is available for pre-order right now (anticipated delivery is mid-summer of 2019) on Topper’s pre-order site. It has a price of $1,000. To learn more about the current Prospex dive watch collection, head over to seikousa.com