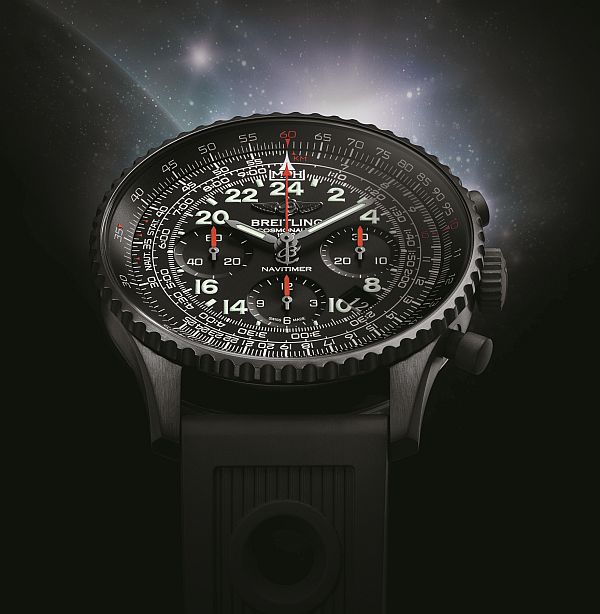 When you think of watches associated with space (and space programs), it probably calls to mind the Omega Speedmaster, or perhaps the Poljot Strela. Did you know that Breitling also has a watch associated with the great space race of the mid-20th century? It did, and Breitling is commemorating the 50th anniversary of the watch’s flight into space.

On May 24th, 1962, a Breitling Navitimer was on the wrist of Lt. Cmdr. Scott Carpenter as he orbited the Earth three times in an Aurora 7 capsule. What separated this watch from others of its day was the fact that it featured a 24-hour dial, allowing for easy demarcation between day and night (which isn’t an easy thing to do when you’re orbiting the globe). A couple years ago Breitling released a limited edition Navitimer Cosmonaute in honor of Mr. Carpenter’s mission (hands-on here). Now, in 2013, Breitling has released the Navitimer Cosmonaute Blacksteel… in black steel.

Of course, this model harkens back to its predecessor of fifty years ago. The new watch features a 42mm black steel case, made utilizing a carbon-based coating that should be resistant to scratches. This same black color carries over to the main dial and sub dials, these then feature red hands and are lumed along with white indices and numerals to make for what should be a rather readable watch. 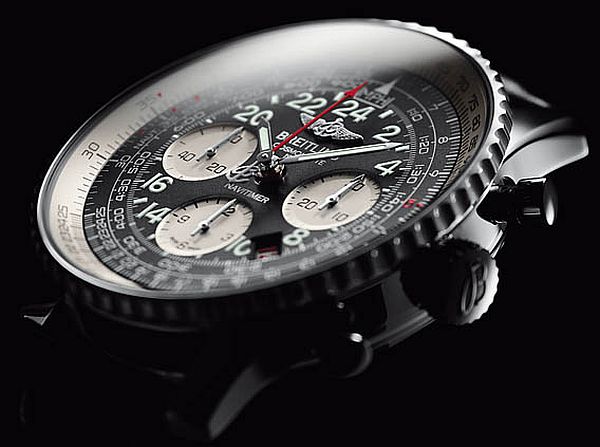 Driving all of the functions of the watch we have the in-house Manufacture Breitling Caliber B02 movement which has attained COSC certification. This movement is a manually-wound one and features a 24-hour scale, both features that hold true to the original model this one is commemorating. This high-beat movement (28,800 bph) also has a 1/4 second chronograph, with 30-minute and 12-hour registers. Seems like a nice, higher-end movement to my read of the specs.

But back to the references to the original, which include the case back engraving, which features the Aurora 7 mission insignia. Staying in line with the Breitling aeronautics lineage, the watch features a slide rule around the dial, allowing for the calculation of any number of things required for airborne navigation via the bi-directional rotating bezel.

As you would expect from a luxury timepiece, the watch features a sapphire crystal; perhaps less expected is the perforated rubber strap (though, the strap would be handy if you test out the 30m WR rating at all). Overall, I think the style of the piece is well executed for all that is being placed into the watch. Overall “at-a-glance” readability should be OK, once you wrap your mind around a 24-hour dial (they do take some getting used to). As to the slide rule, I think it’s one of those things that, if you’re not using it, it’ll fade into the background. 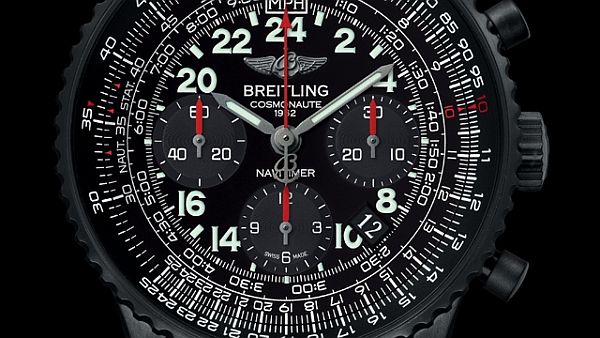 Of course, if you do manage to snag one of these limited edition pieces (1,000 pieces worldwide) for the asking price of $9,590, it would be a worthwhile (and interesting) exercise to teach yourself to run calculations using the slide rule – not something many folks these days are likely to say they can do. breitling.com

Curious about how a slide rule works and how to use it? We’ve got you covered »