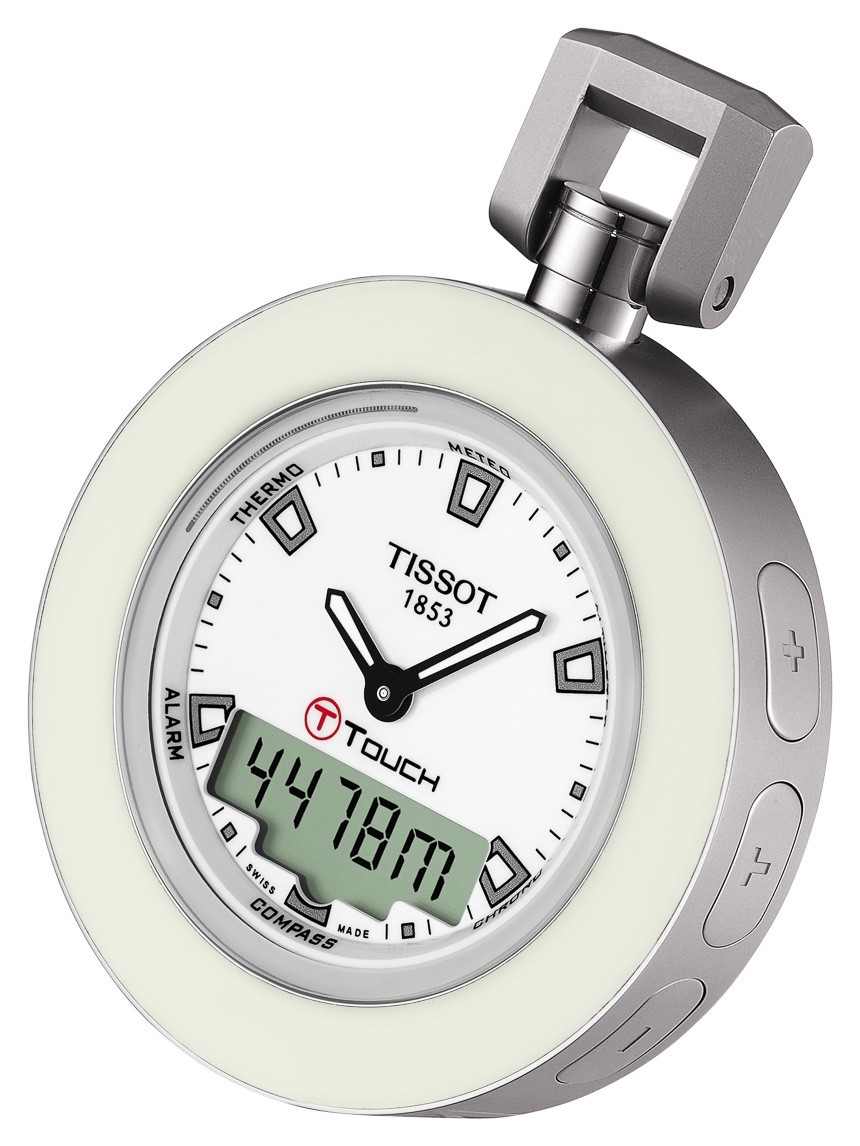 The Tissot Pocket Touch is an interesting item with a distinct niche appeal which transforms the extremely popular Tissot T-Touch collection into a pocket watch. aBlogtoWatch recently reviewed the new Tissot T-Touch Expert Solar watch here, which was new for 2014 (and will have some 2015 updates). The also new for 2015 Tissot Pocket Touch is aimed at outdoor adventurers or anyone else needing a highly functional Swiss quartz watch with an environmental sensor array (or perhaps anyone else who thinks the T-Touch is cool but already has a timepiece, or doesn’t want to wear one). The Pocket Touch works just like T-Touch watches, in that the user activates the sapphire crystal screen to become a touch screen.

Pushing various points on the edge of the dial (or in the center) activates features such as a compass, thermometer, altimeter, barometer (Meteo), chronograph, alarms, and second time zone. The Swiss ETA caliber E48.311 quartz movement also includes a calendar and back-light function. Unlike the Tissot T-touch Expert Solar wrist watch that is powered by light, the Pocket Touch is more traditional and will require a battery change (though it does have a battery end-of-life indicator). 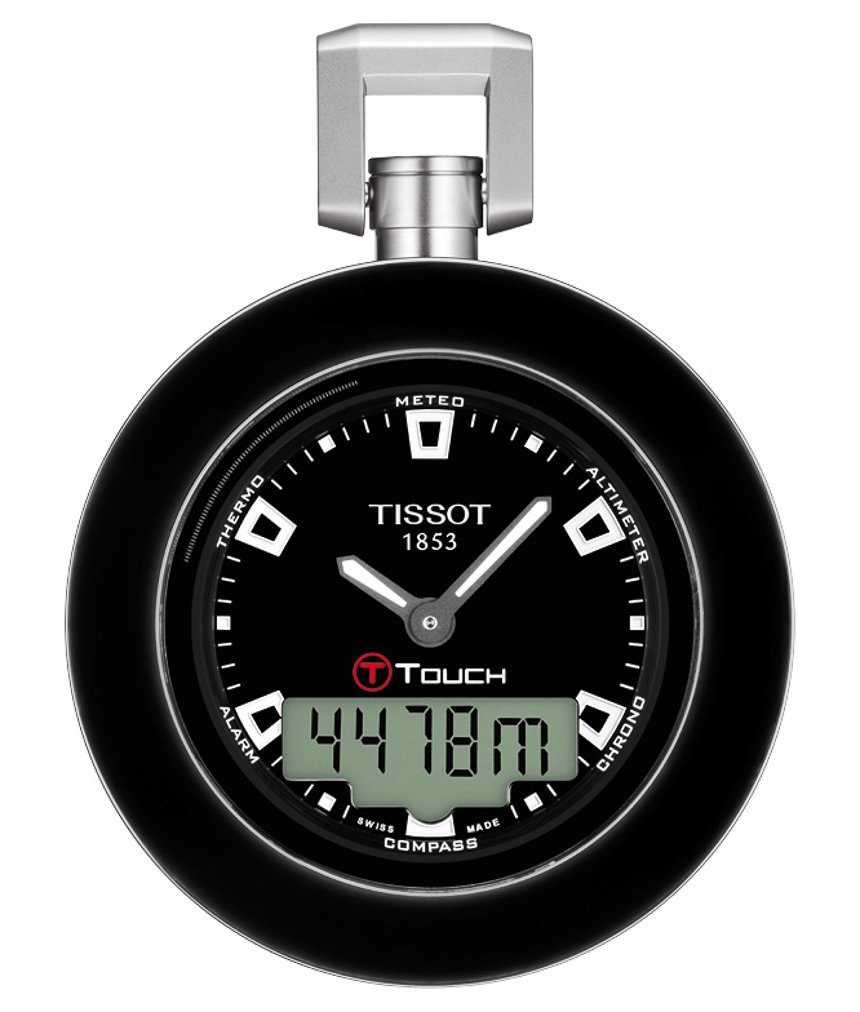 The Pocket Touch is 48mm wide (which you could technically wear on your wrist), making it modestly sized for a pocket watch and easily transportable. The case is produced in steel and water resistant to 100 meters. Tissot will produce both a version of the Pocket Touch with a white dial and un-coated steel case, as well as a Pocket Touch with a black dial and a PVD black-coated case. The good news is that they each cost the same.

Given that this is a Swiss Tissot product, chances are that it is going to be of a much higher quality than most timekeeping electronic sensor dongles or other similar gear meant to hang on your backpack or in your bag – but then, it has a price to match. The T-Touch combines traditional analog hands and a digital screen for a successful formula which has been very good for Tissot since the T-Touch’s original debut in 1999. 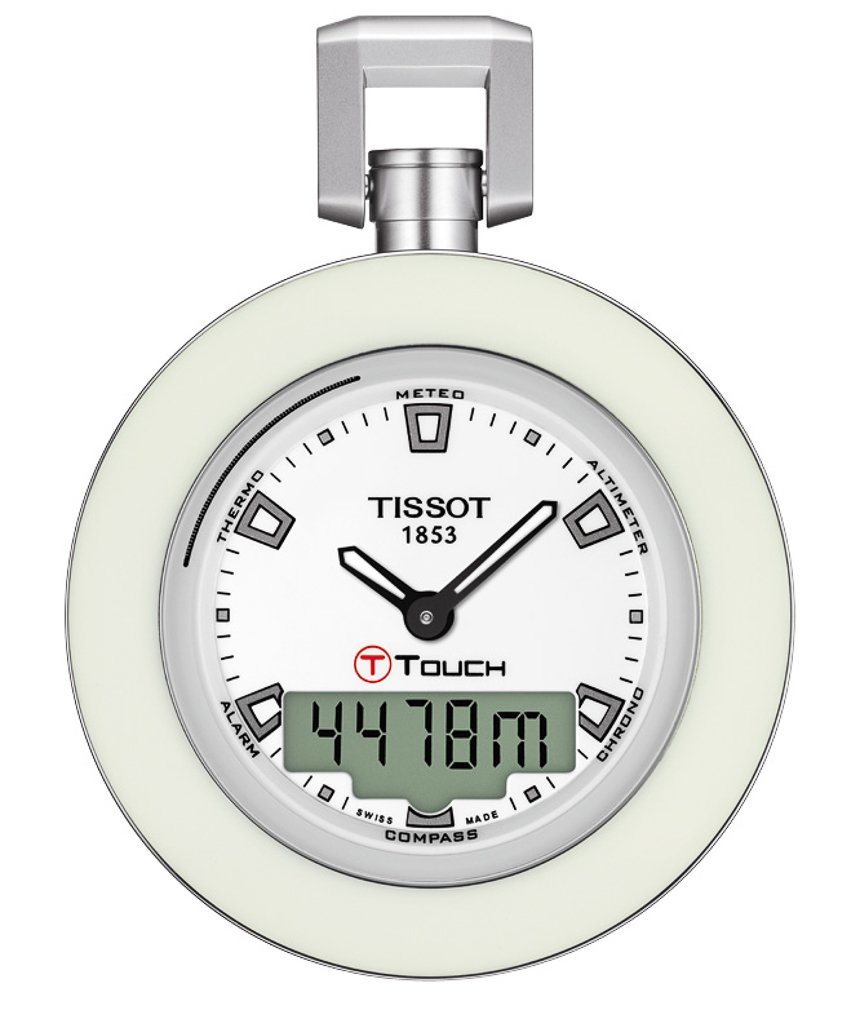 From a design perspective, even though the Tissot Pocket Touch is modern, it feels quite retro-futuristic. The case is thick and bare, reminding me of similar design aesthetics from the 1990s. This is further echoed by the mostly monochromatic color elements. Tissot admits that there is a retro flair to the design which is an interesting take on what is essentially meant to be a modern timekeeping instrument. Of course, because the Tissot Pocket Touch is a pocket watch in style, it comes with a chain attachment. While the design goes well with an outdoors theme, if you try to dress up with this pocket watch I hope you find yourself at the “android’s ball.”

Available about now, the Tissot Pocket Touch in the T-Touch collection is an interesting new model from Tissot for specific demographics who’ve always wanted a T-Touch, but just not in wrist watch form. The two model reference numbers for the Pocket Touch are the ref. T857.420.19.011.00 with the white dial and the ref. T857.420.19.051.00 with the black dial. Price is $950 USD (790 Swiss Francs, 620 Euros). tissotshop.com