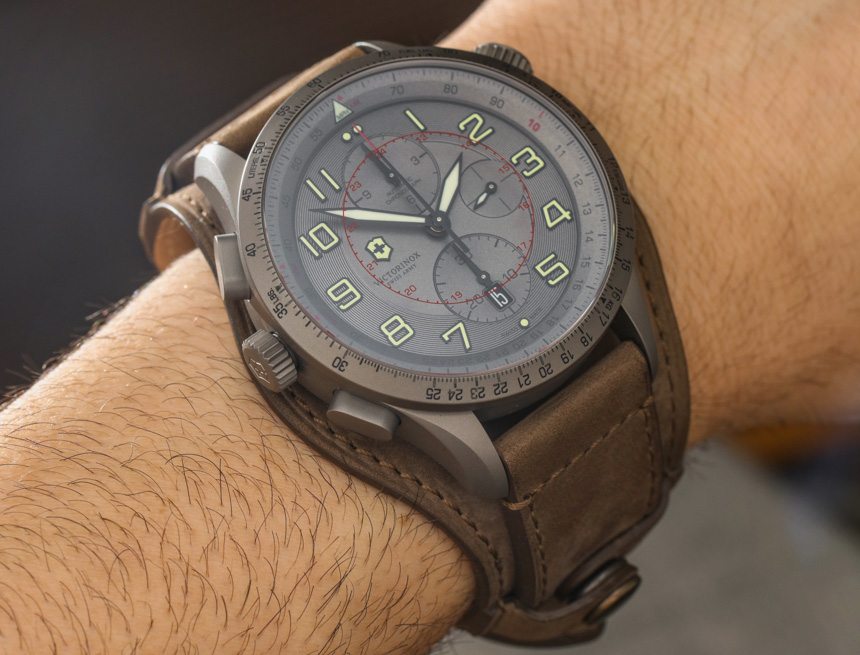 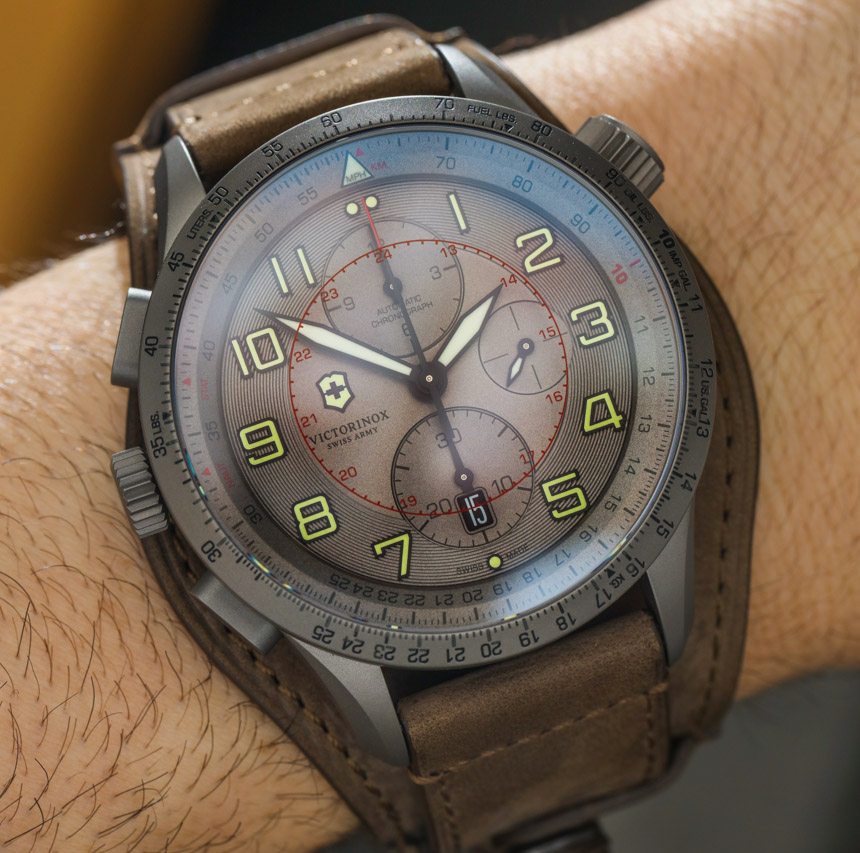 Some of the cooler limited edition watches you’ll find each year come from some unlikely sources. Let me first add that when a high-end, niche watchmaker produces a limited-edition watch, it is sort of redundant. Why? Well, if a watch maker only produces limited quantities as is, then most of their watches are actually unofficially limited editions anyway. With that said, what happens when a major global brand that produces millions of products each year produces something interesting as a limited edition of just 250 pieces? Well, you may not always like result, but the implication is that these watches are truly a bit more limited. That is certainly the case with the handsome, new-for-2016 Victorinox Swiss Army Airboss Mach 9 Titanium Limited Edition that I found to be both legible and stylistically fetching. 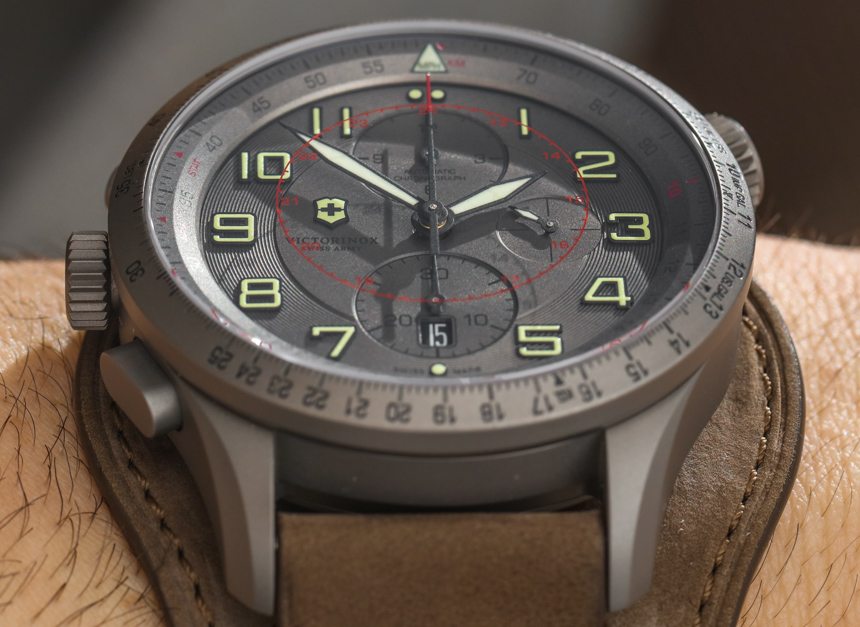 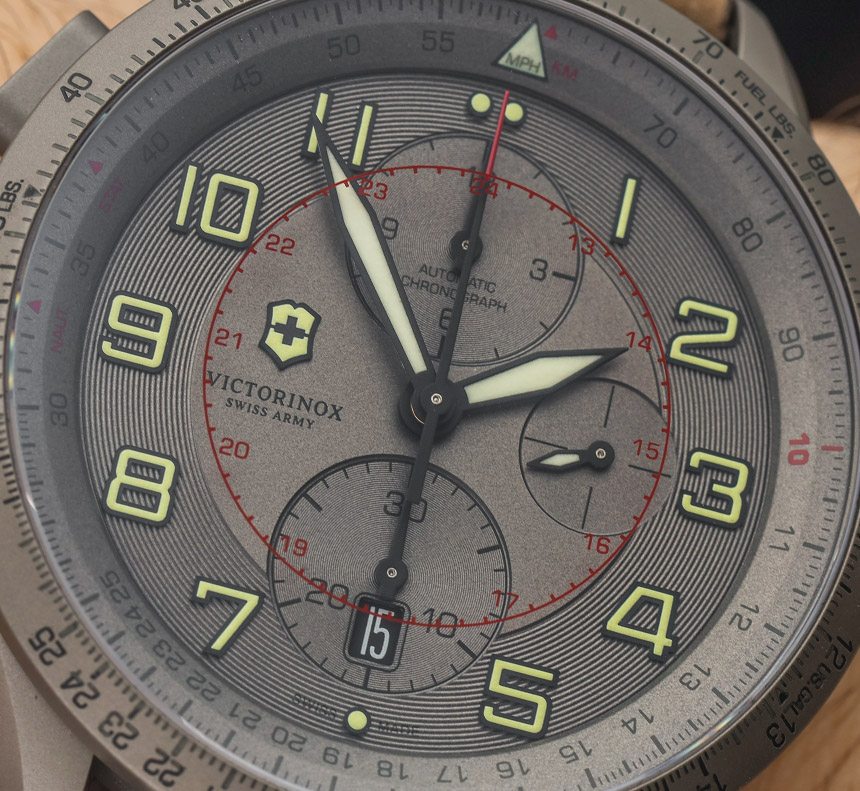 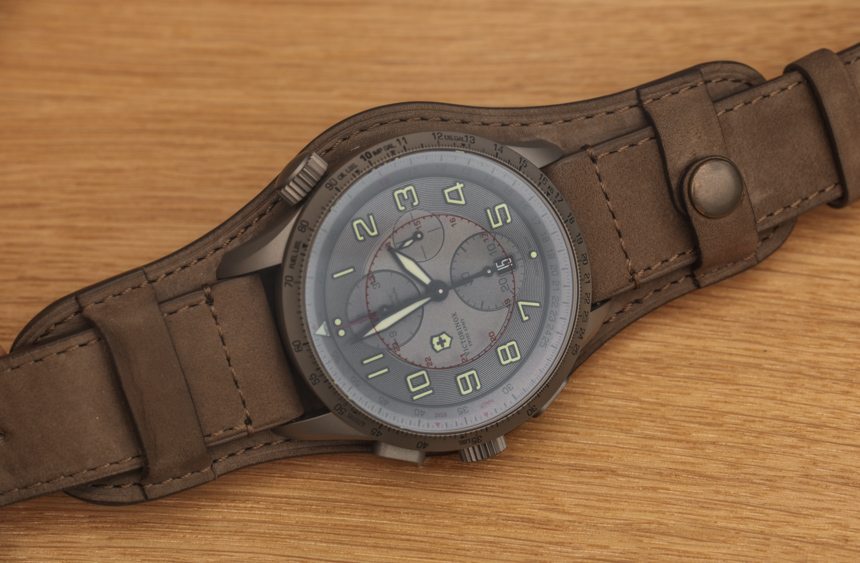 The limited-edition model maintains the dial design almost entirely, even though the colors are different. The case is also offered in light sandblasted titanium (as opposed to PVD-coated black steel), and the watch gets a handsome dual-style strap to go with it. Call me a sucker for a strap, but I really like slightly vintage-style brown leather strap that comes with the Victorinox Swiss Army Airboss Mach 9 Titanium Limited Edition, so I’ll spend a moment on it. 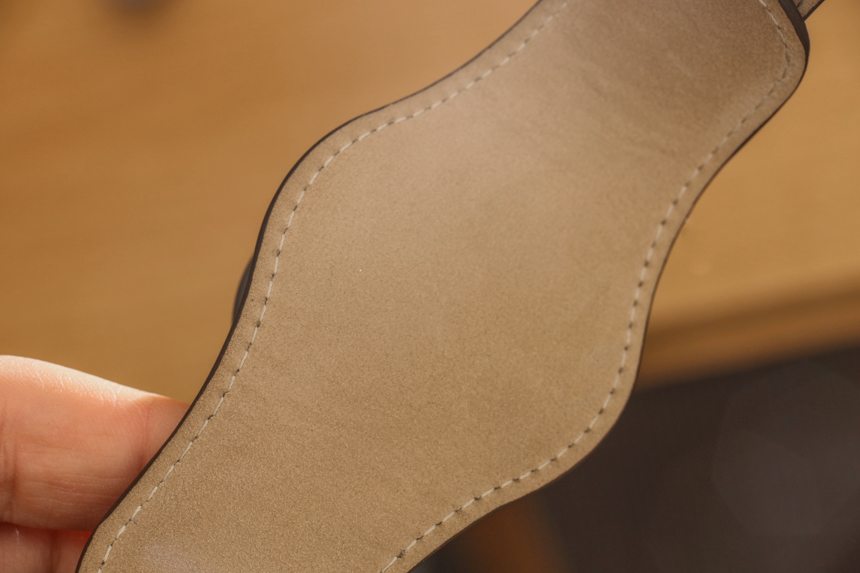 I previously mentioned that the strap can be used in two ways. That’s because Victorinox Swiss Army designed it with a removable “bund section.” Bund-style straps are those which have a piece of material (usually leather) that entirely covers the rear of the case before it touches your arm, shirt, or jacket. To be honest, I am not sure the original purpose of these straps but it was obviously to ensure the watch didn’t touch your skin for some reason. Today, bund-style (AKA “cuff”) straps aren’t too common, but they aren’t ultra rare either. Even one version of the Apple Watch Hermes strap comes in a cuff style (for men). 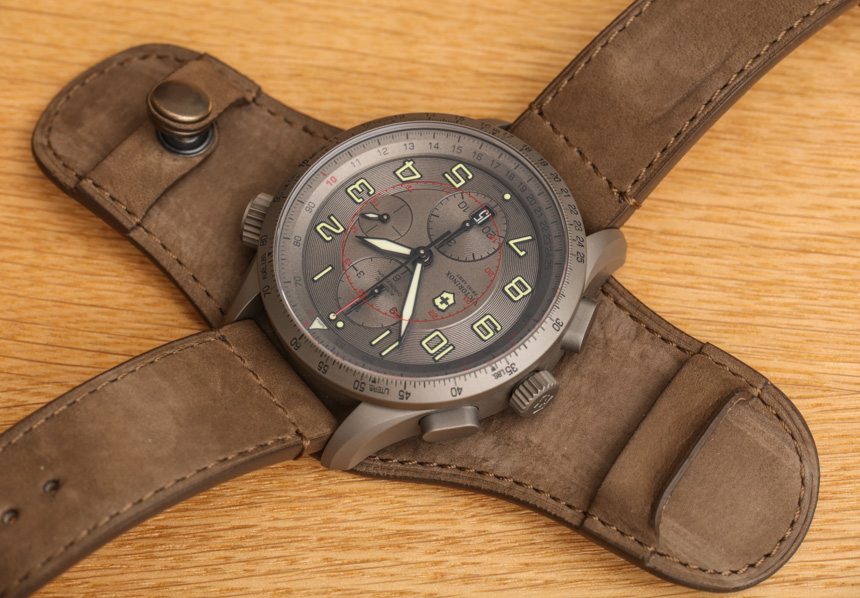 The trick here for this Victorinox Swiss Army Airboss Mach 9 Titanium Limited Edition is that you can remove the bund section using a snap button on each side. This gives you the option of wearing it as a more standard strap or with the added leather element that goes under the case. It might not be ideal for everyday, but this vintage-looking leather strap combined with the more modern look of the case (that is nonetheless sandblasted like some vintage pilot watches) comes across as being “tool watch-ish” but also fashionable. I consider it a winner, and the design refinement here is evident. While Victorinox Swiss Army produces a range of products, they clearly put an enormous amount of effort into their wristwatches. 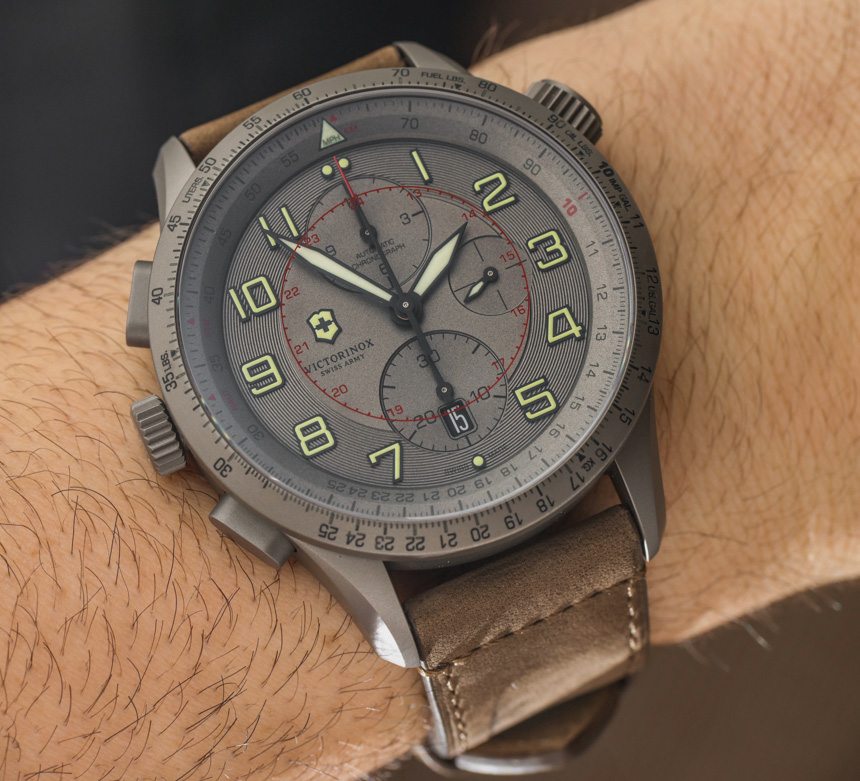 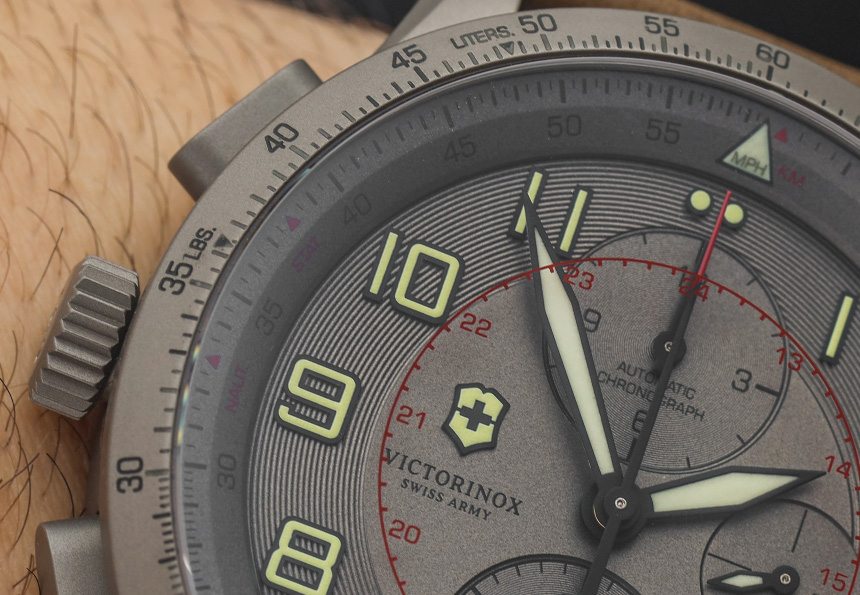 The Victorinox Swiss Army Airboss Mach 9 Titanium Limited Edition case is 45mm wide and topped with an AR-coated sapphire crystal. Inside the case is a Swiss ETA Valjoux 7750 automatic chronograph movement. Only here, Victorinox Swiss Army has decided to flip the movement so that the pusher and subdials are reversed. In essence, this makes it a “lefty watch” because the pushers are on the other other side. Aesthetically, this makes an otherwise familiar design just a little bit “different.” Functionality doesn’t change, but the less-than-standard orientation does require a double-take for some people to recognize what they are seeing. 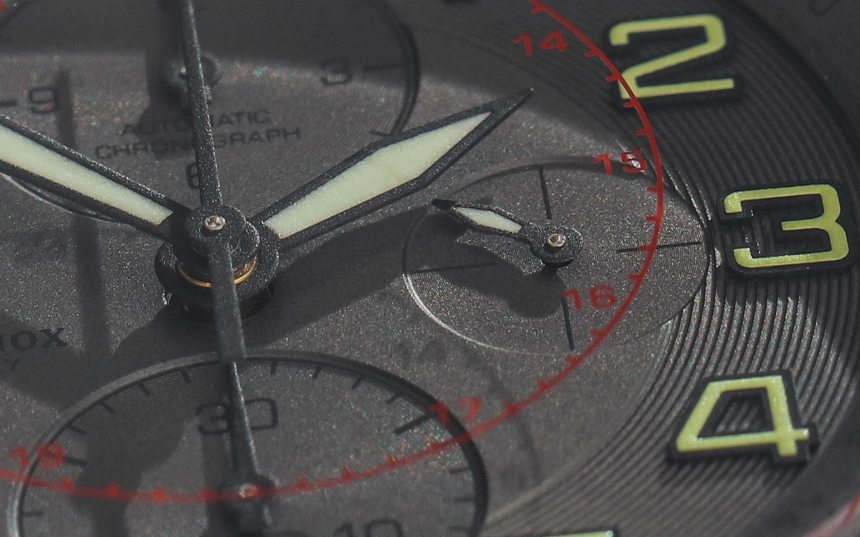 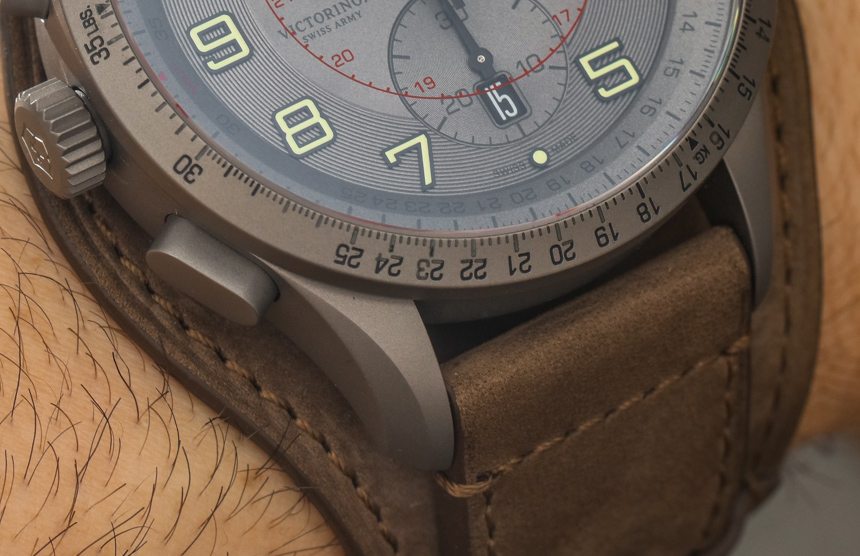 While I don’t mind it, the most controversial element of the dial is the red 24-hour ring printed on the sapphire crystal that hovers over the dial. I actually find it sort of cool, but I don’t blame people who aren’t wholly enthused by this design feature. Victorinox Swiss Army did a very nice job with the dial overall. Now in a matching titanium gray tone, the applied raised and lume-painted Arabic hour numerals look great and offer super legibility in combination with the strong hands. Little touches such as the symmetrical and non-intrusive date window are further welcome details. A lack of polished surfaces but enough colors offer a masculine tool-style watch theme that is nevertheless elegant. That’s something that Victorinox Swiss Army is uncommonly good at, and a tough thing to accomplish – especially among brands that produce watches at the volumes they do. 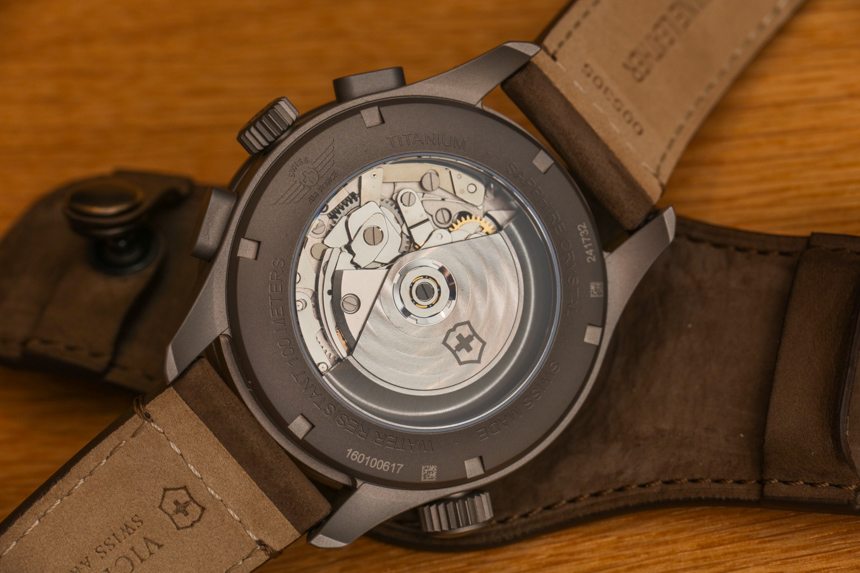 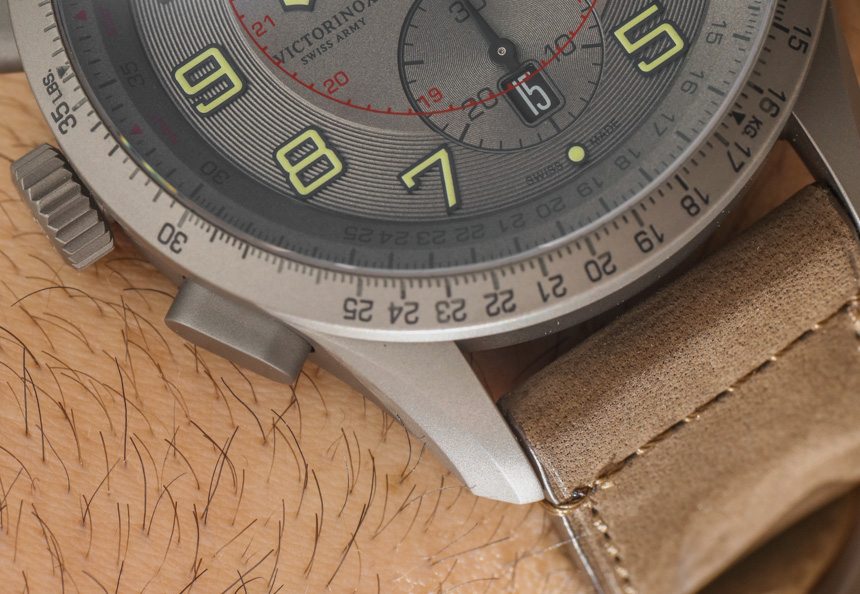 You’ll also notice that there is an additional crown on the right side of the watch. This is used to operate an internal rotating bezel on the Airboss Chronograph. On previous models such as the Victorinox Swiss Army Airboss Mach 6, this internal ring was a 60-minute counter. In some more recent models such as this Victorinox Swiss Army Airboss Mach 9 Titanium Limited Edition, it works with the outer bezel to serve as a slide-rule. I continue to share my relatively apathetic feelings toward slide rule bezels – but that is probably because I would never use one. If there is anything I utterly loath doing in an “analog way” it is mathematical calculations. Long live the digital calculator. If I were in an emergency situation and all I had to rely on was a slide-rule bezel, then guess what, I’d remain in just as dire a predicament. 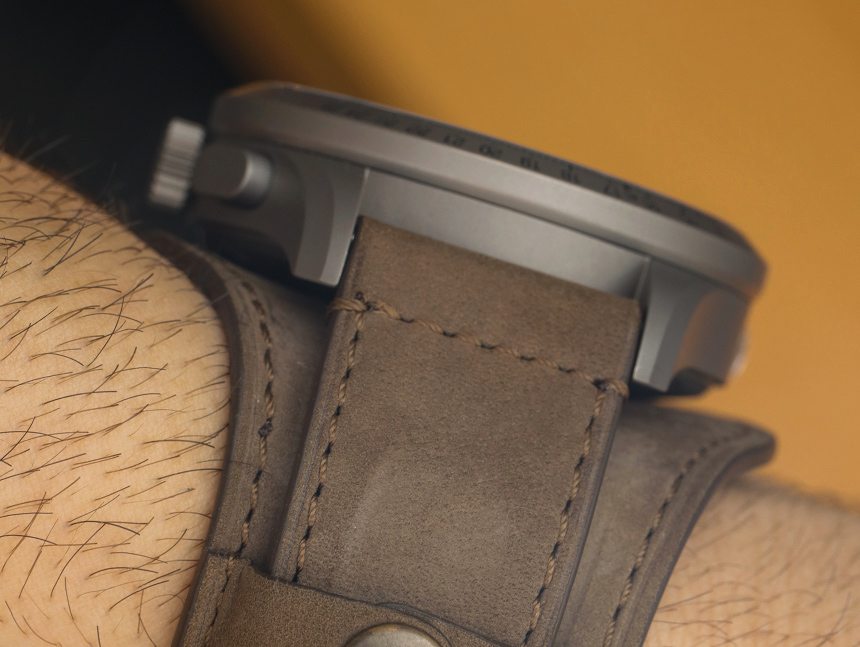 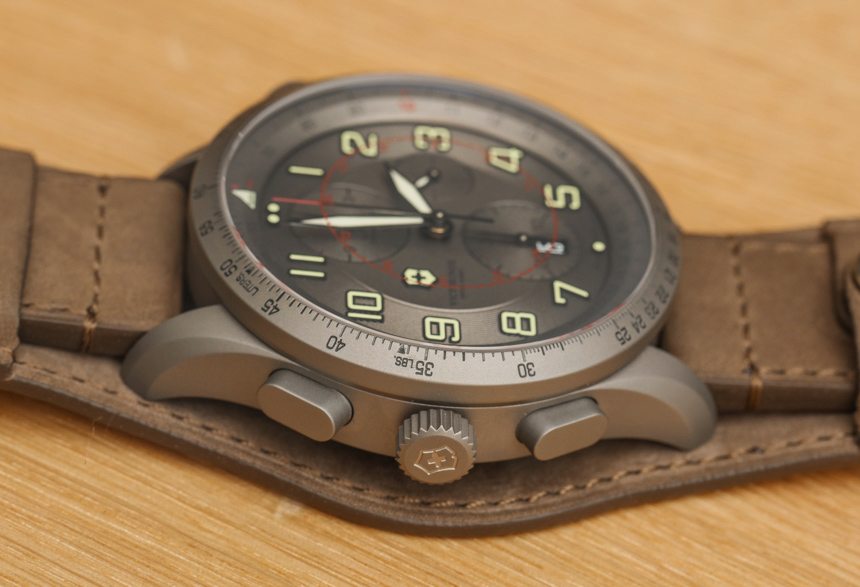 Even though the optional bund section on the straps adds some visual (and physical heft) the watch still wears relatively well for a 45mm-wide timepiece – and, in my opinion, it looks pretty cool at that. Of course, this isn’t a Victorinox Swiss Army timepiece for everyone, but the brand is clearly aware of that given that it is not going to be produced in high numbers, as a limited edition of just 250 pieces. The reference 241732 Victorinox Swiss Army Airboos Mach 9 Titanium Limited Edition has a retail price of $2,495. swissarmy.com