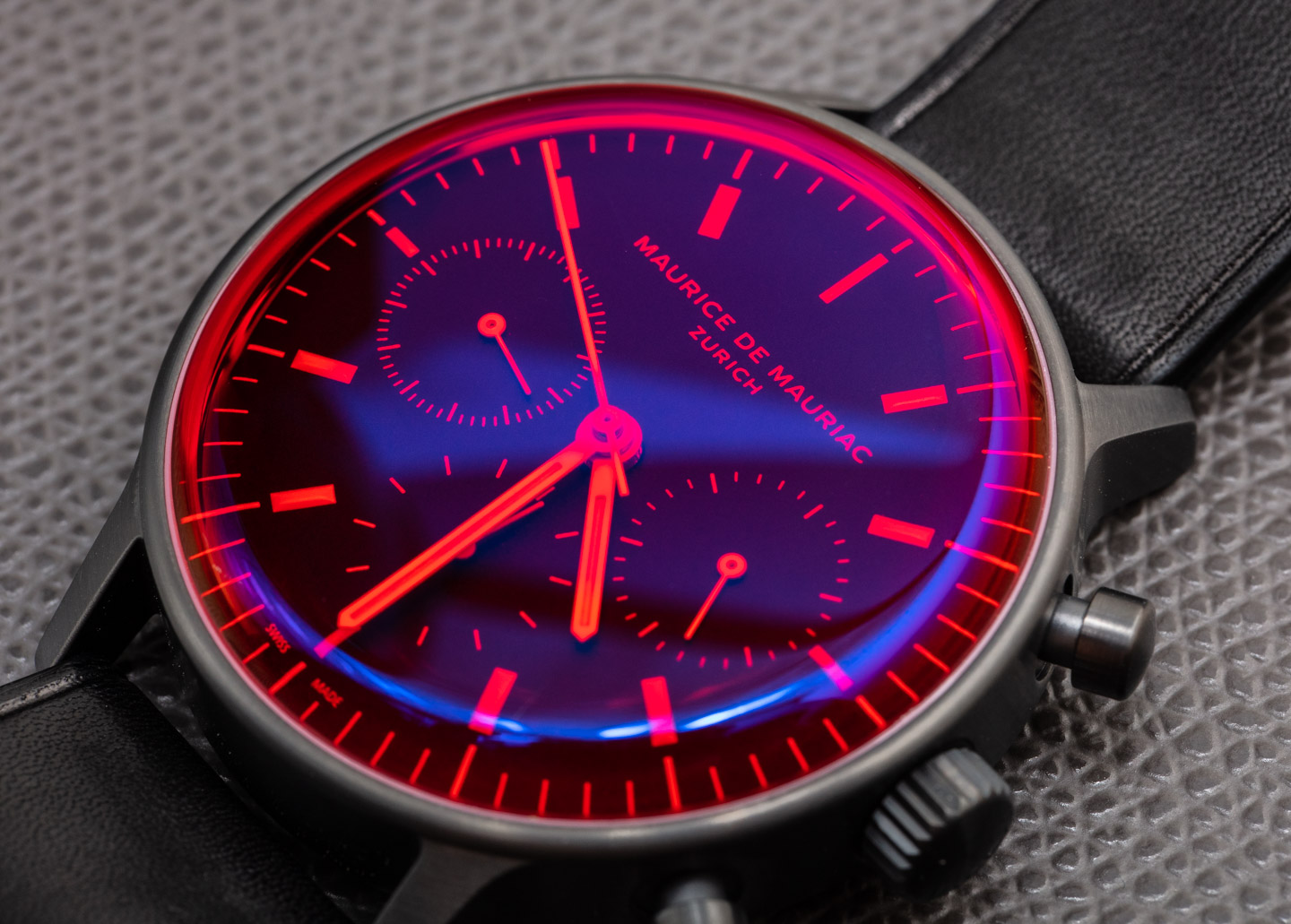 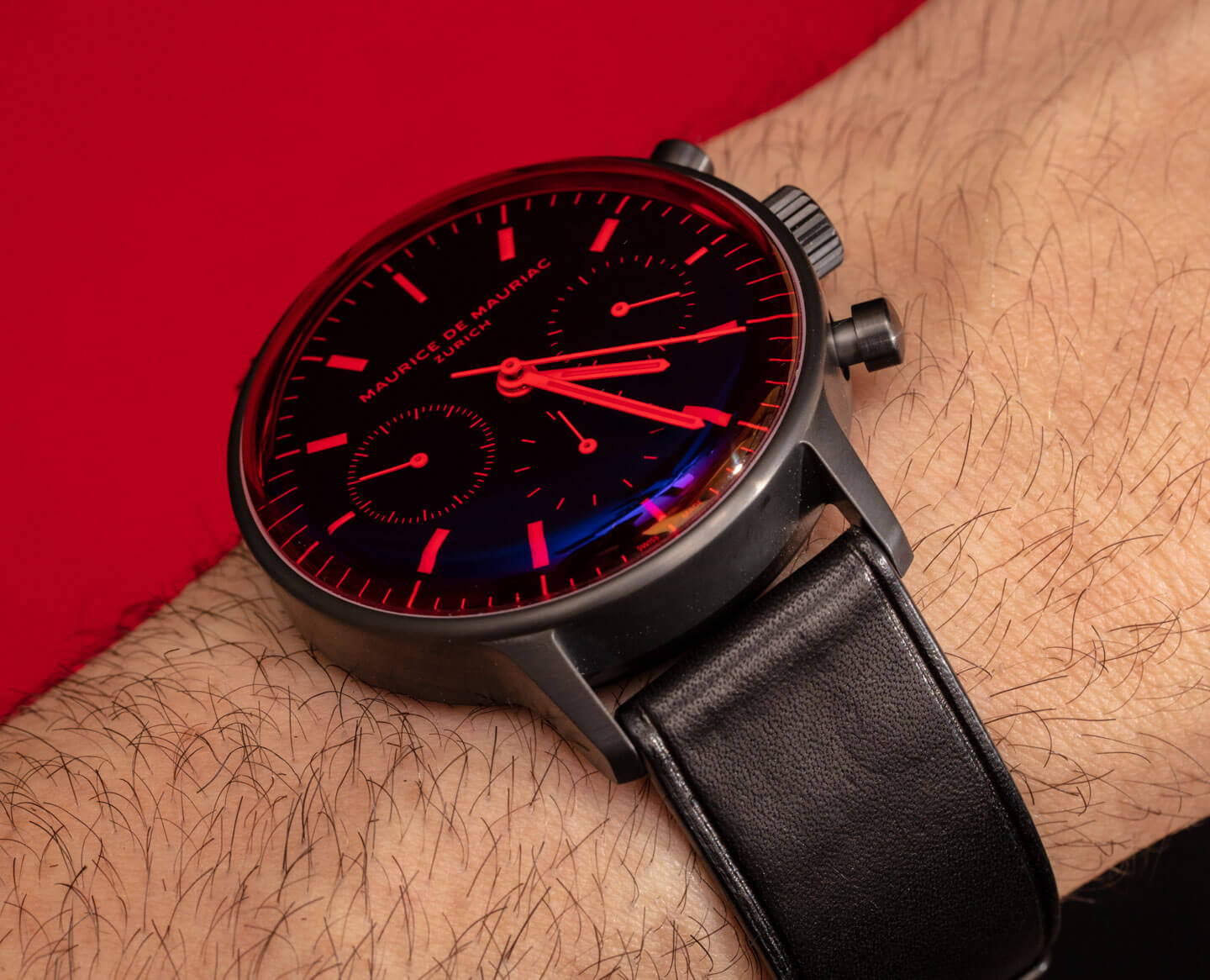 Zurich-based watchmaker Maurice de Mauriac is small but bold with its fashion statements. More than one popular aesthetic trend was realized by the brand’s founder Daniel Dreifuss prior to the big guys in business around him ever taking notice. Dreifuss was on to bright colors before it got popular. He was into NATO straps before they got popular. He was into the modular concept behind case construction before it got popular, and he was into colored crystals before they got popular. Absent for a few years, color-tinted sapphire crystals available for select Maurice de Mauriac watches are back, and this time on the still fresh L3 Chronograph which debuted last year.

The L3 Chronograph is the third major piece in the Maurice de Mauriac “L” series, each designed by Zurich-based industrial designer Fabian Schwaerzler. The Maurice de Mauriac L1 was a lovely minimalist daily wear semi-dress watch (aBlogtoWatch review here). Next was the L2, which comes in steel or bronze (aBlogtoWatch review here) and is a diver’s watch. Finally, the L3 is the chronograph of the family, and it adds the popular complication the “designy” and is directly inspired by Omega Speedmaster Professional Moonwatch. 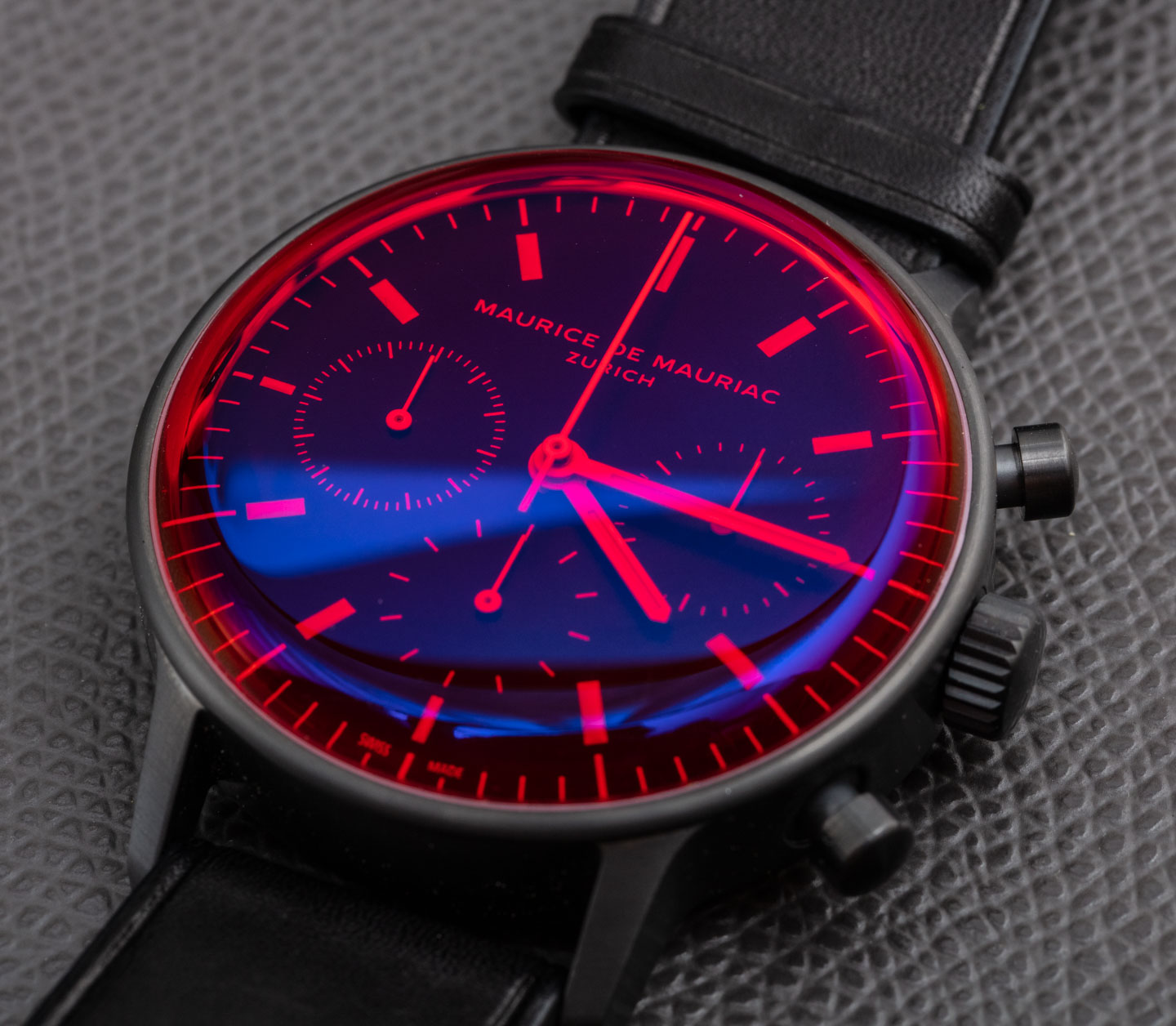 One of the interesting things about the L3 Chronograph is that Maurice de Mauriac went out of its way to have it be manually wound. The movement it is based on is produced by Swiss Concepto and uses (more or less) the Valjoux 7750 architecture. It then removes the automatic winding mechanism to turn the watch into a manually wound mechanical movement. There really aren’t other available manually wound chronograph movements easily available for purchase on the market, so it makes sense why Maurice de Mauriac took this approach. By why did it need to be manually wound? Well, probably because the Speedmaster Professional Moonwatch is, too. It also helps the case be thinner — which is not an insignificant benefit, from a design perspective. 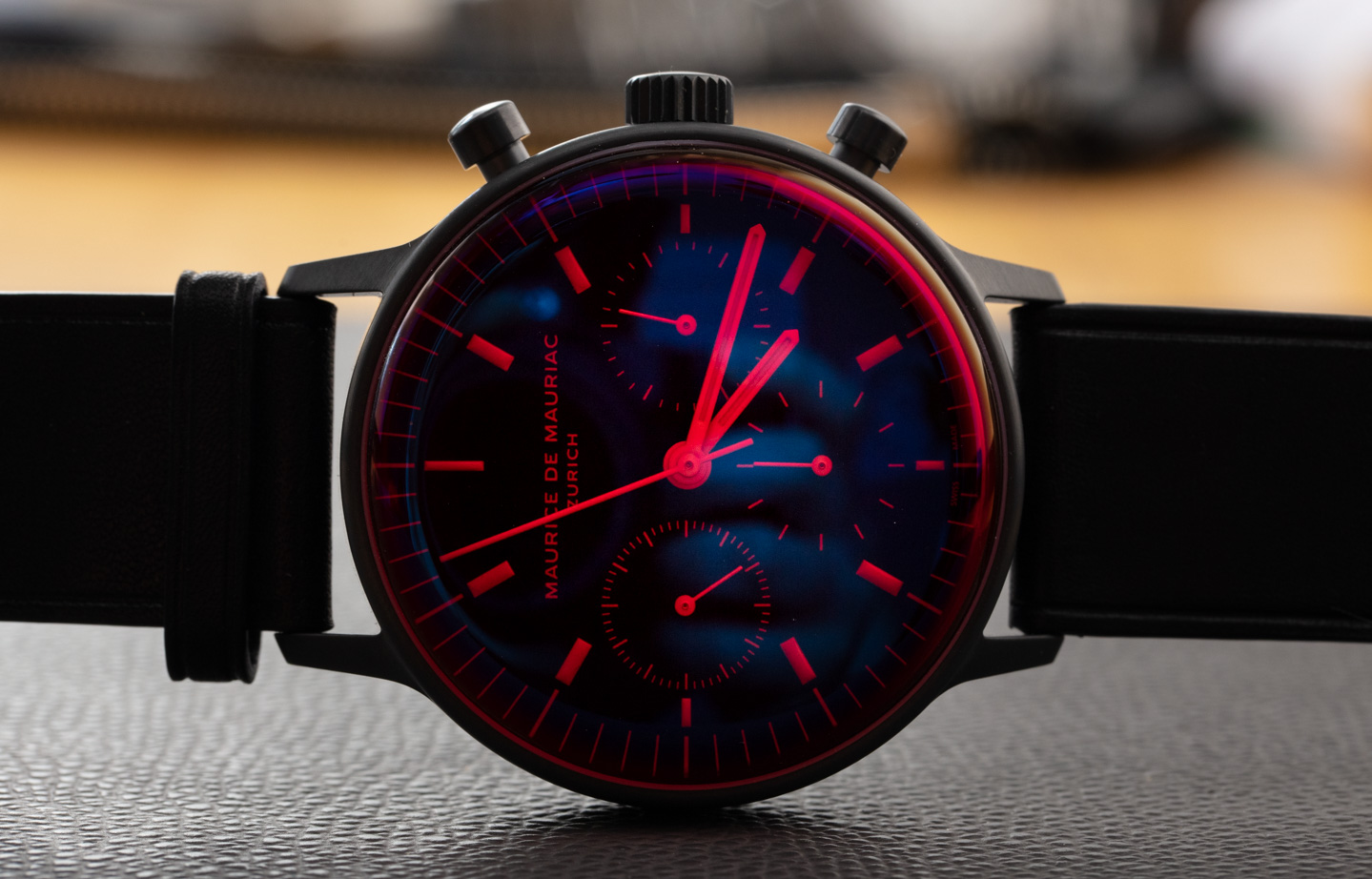 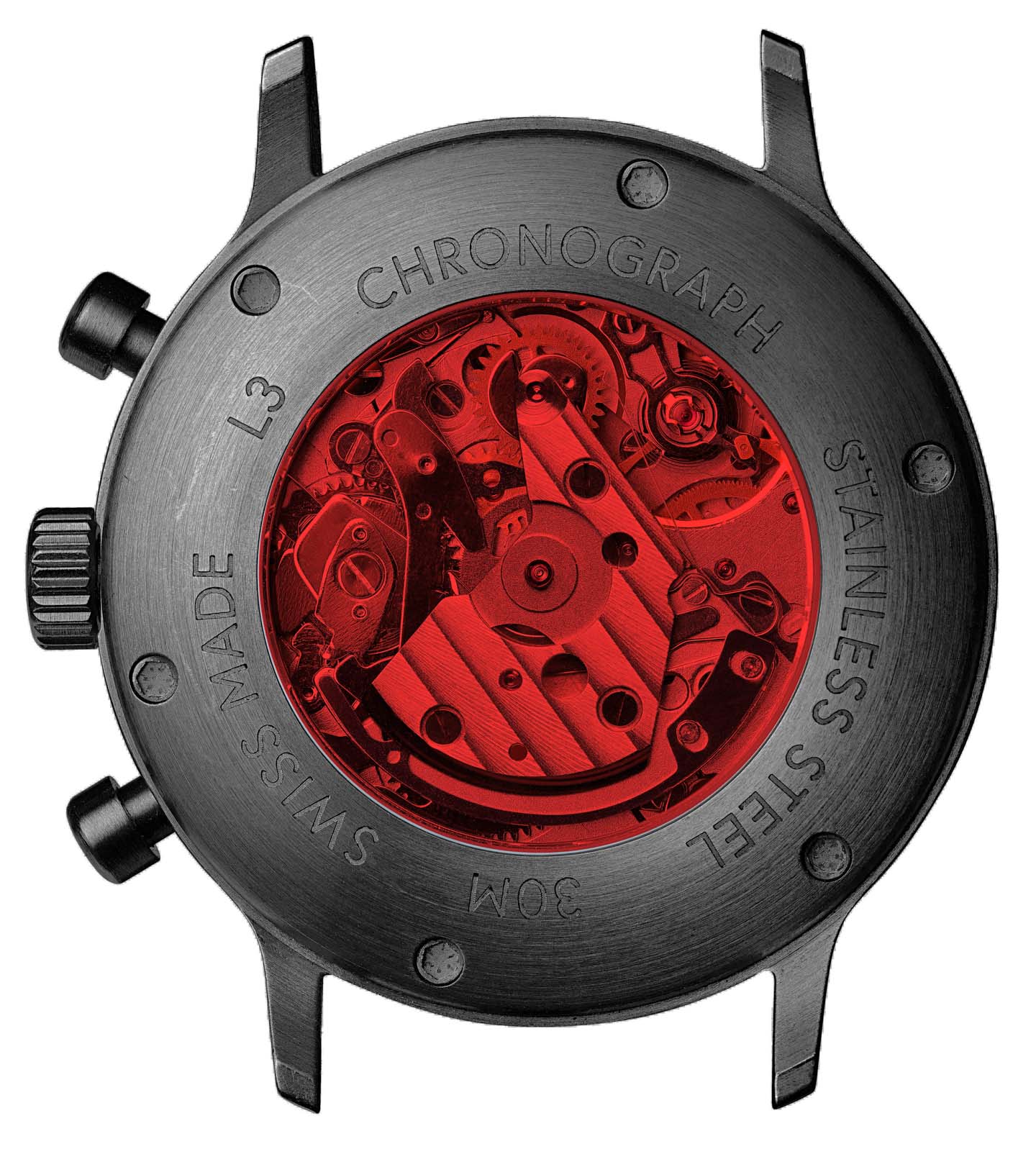 The L3 Chronograph movement itself is known as the Concepto caliber 99001, which operates at 4Hz with about two days of power reserve. It was also apparently specially produced for Maurice de Mauriac. The watch I am shooting for this hands-on review of the L3 Chronograph is a pre-production prototype that did not have the appropriate matching red crystal on the caseback. Standard clear-dial L3 Chronograph watches have a matching clear rear crystal, whereas this red-tinted crystal sapphire crystal version of the watch has a matching red caseback window.

The L3 Chronograph case itself is a lovely object, using as few pieces as possible and enjoying a distinct but minimalized form. This is the most Bauhaus element of the watch, and it fits because the dial design is itself very Bauhaus (though we tend to mostly associate it with the Speedmaster — even though it is not exactly a direct analog). The smooth edges of the case contrast with the purposeful look of the crown and plunger-style pushers. The crystal sits “box-style” on top of the case and is evocative of how acrylic crystal often looked. This crystal style helps make the watch look larger, as there is no visual bezel, and it further helps give the dial superior legibility when viewing it from extreme angles. 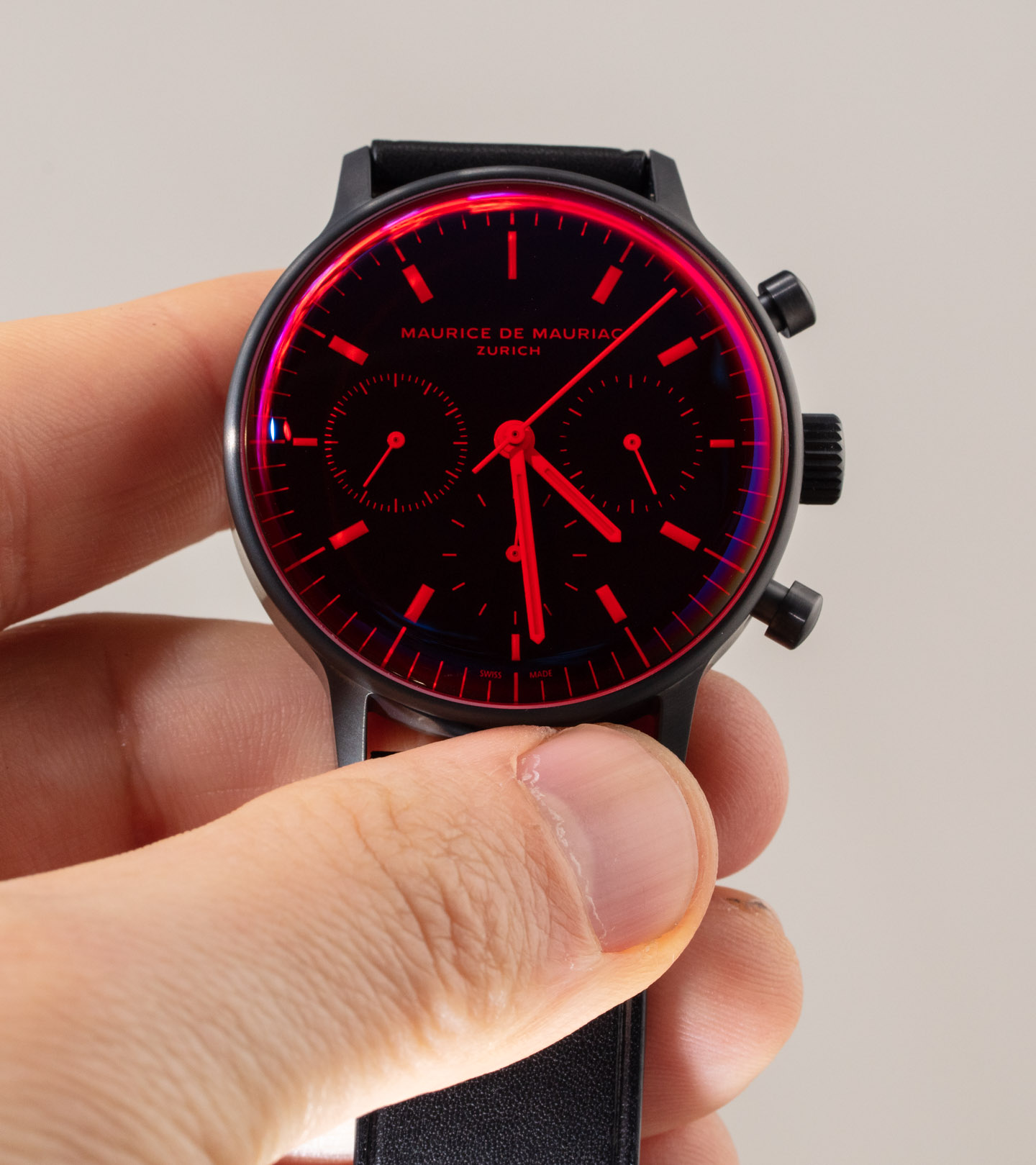 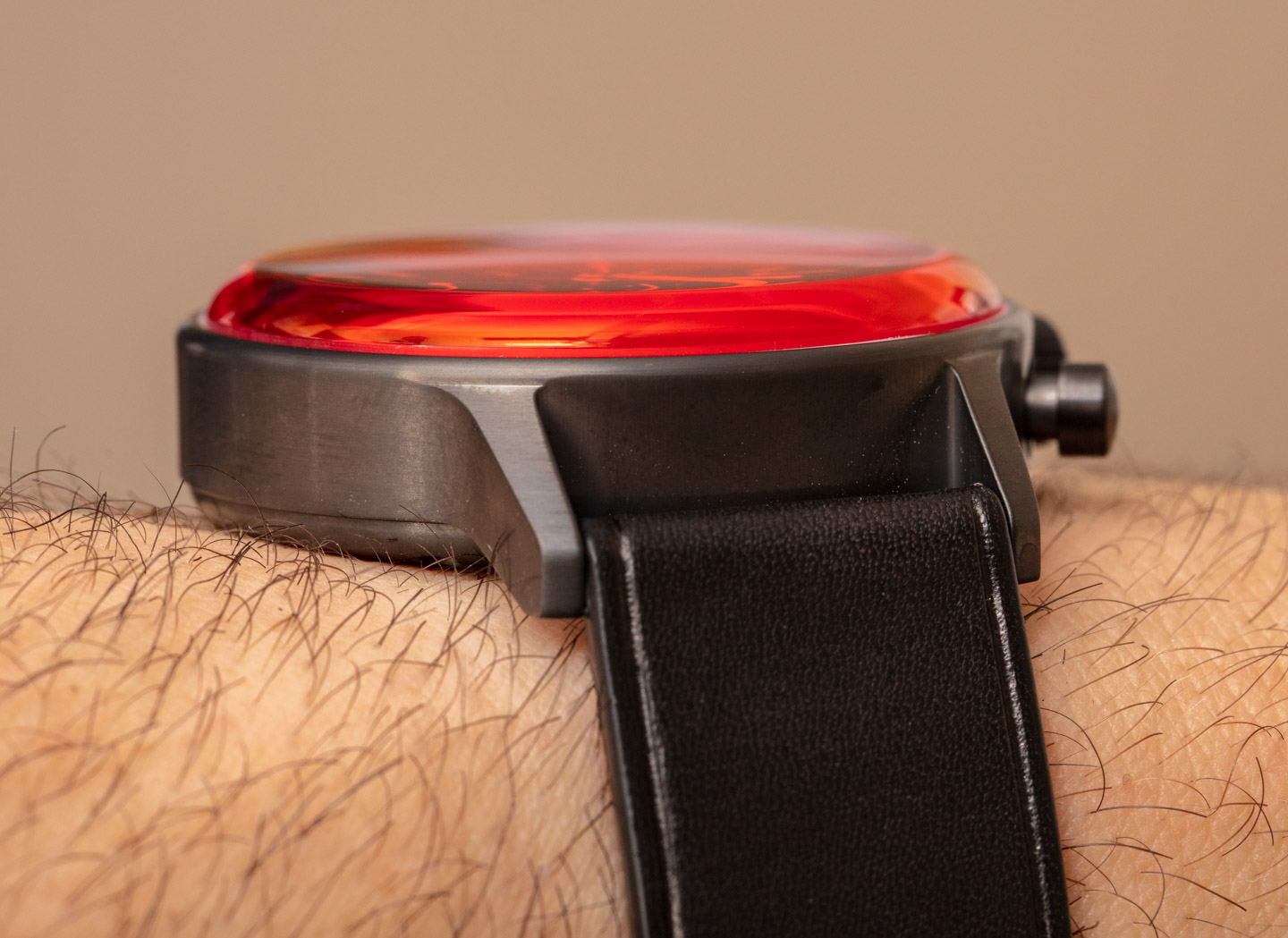 The L3 Chronograph case is 40.5mm-wide, about 13-14mm-thick, and has a roughly 48mm lug-to-lug distance with 20mm-wide lugs for the strap. Case water resistance is just 30 meters — so this isn’t a sports watch to go swimming with, unfortunately. This particular version of the steel case is DLC-coated to an anthracite color (not quite black), which gives it a slicker, more subdued look, and pairs well with the crystal. Speaking of red crystal, I did mention that this is a design aesthetic Maurice de Mauriac brought back. I first covered this seriously cool trend with the brand in 2011 when reviewing the Maurice de Mauriac Chronograph Modern Tactical Vision watch.  Two years later, in 2020, I reviewed a watch with a red crystal, the Maurice de Mauriac Chronograph Modern Travel Timer. In fact, just a few weeks before Maurice de Mauriac revealed this now debuted today L3 Chronograph with the red crystal, I asked, “Isn’t it about time you bring back some colored crystals?” Looks like they were a bit ahead of me on that one.

Probably the most popular (by volume) luxury watch with a tinted sapphire crystal is the Rolex Milgauss. Rolex’s most modern Milgauss has been produced as the Milgauss reference 116400GV with the green-tinted sapphire crystal (aBlogtoWatch review here), and also later as the Milgauss with the Z Blue crystal (aBlogtoWatch hands-on here). Despite the popularity of these watches, Rolex never really took it further, and most other major luxury watch brands seemed to miss the appeal of the trend altogether. That is a loss for consumers since the creative opportunity available when a designer can now incorporate colored sapphire crystals is incredible, in my opinion. 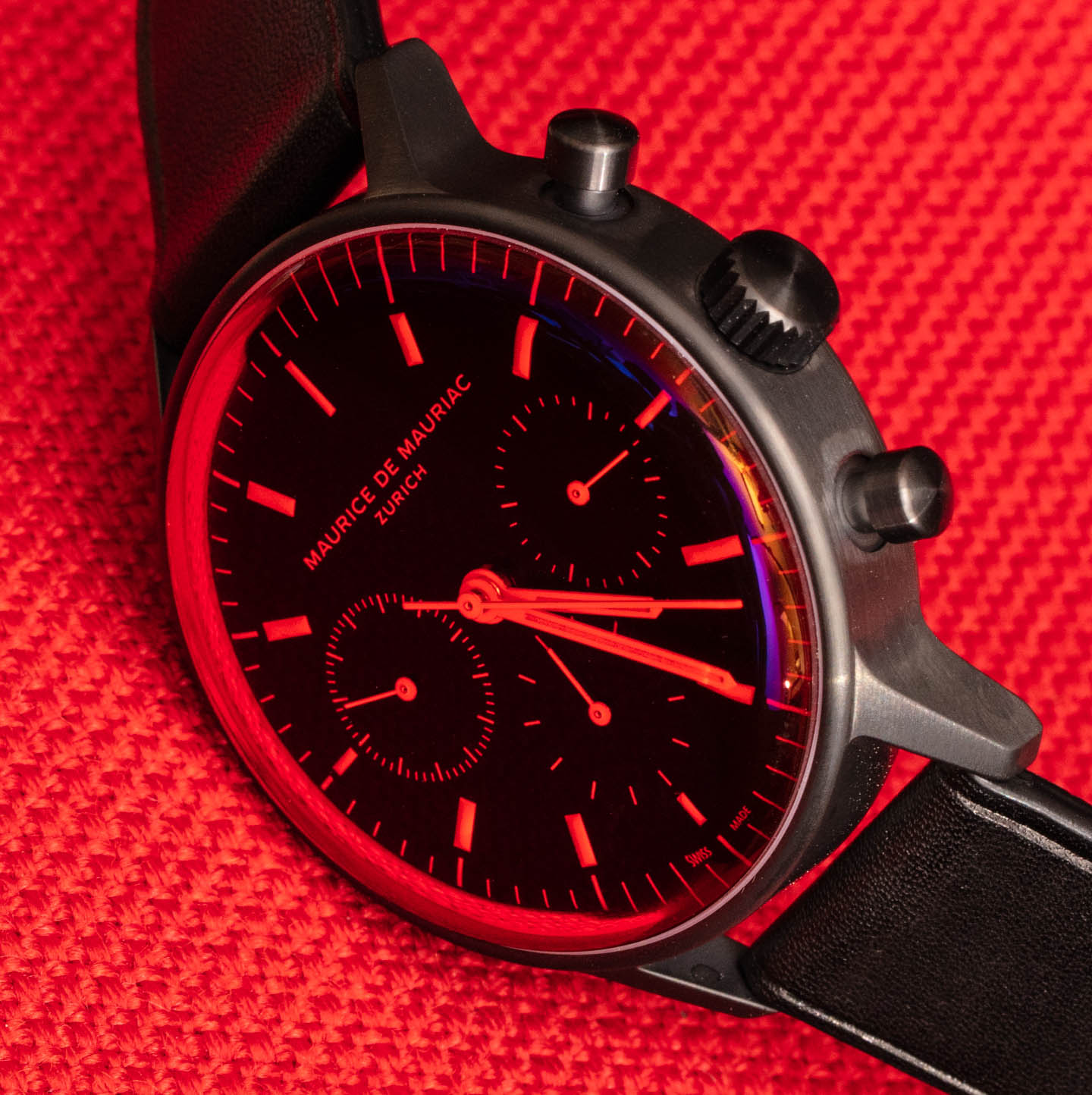 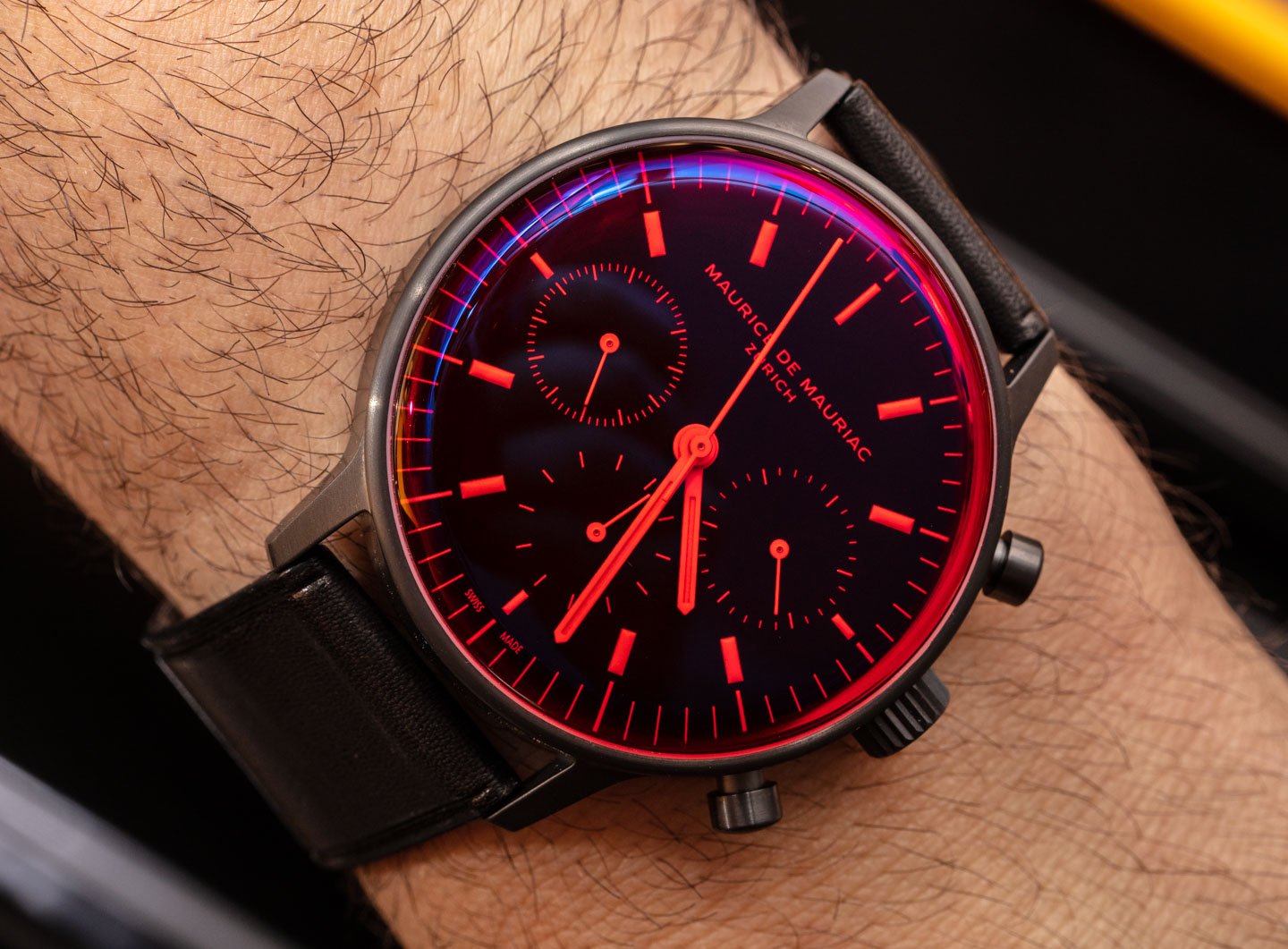