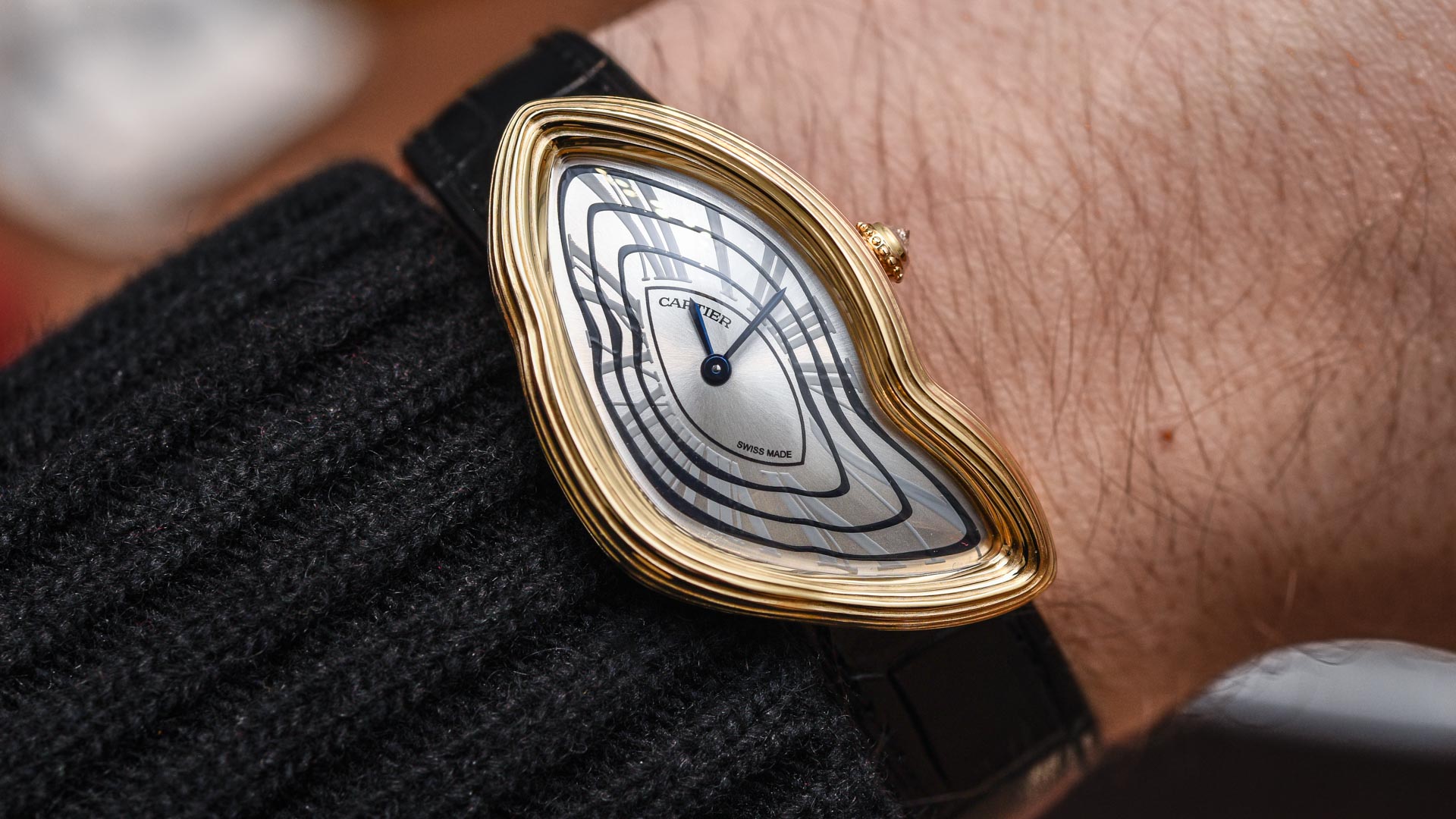 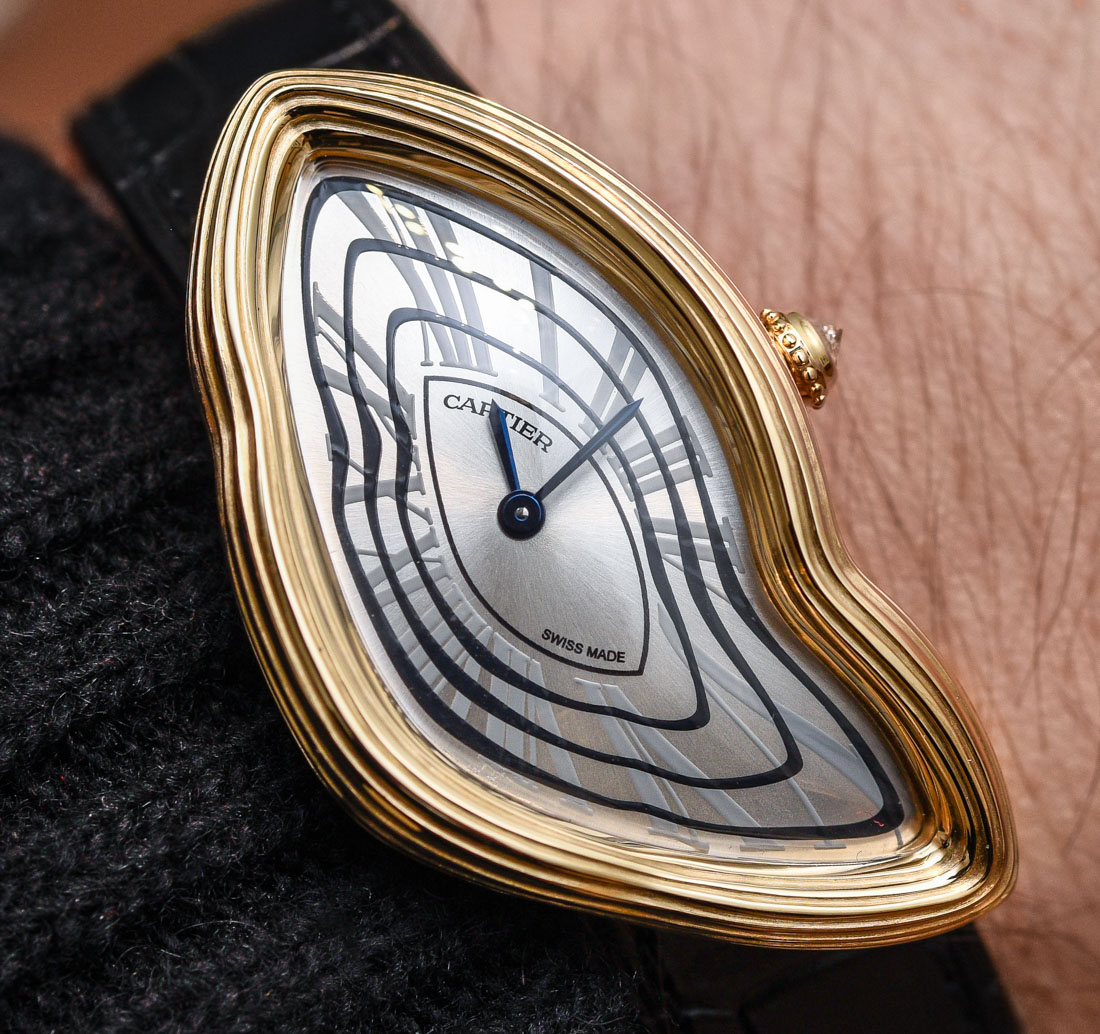 The Cartier Crash is a strange, morbid, and fascinating watch. Even as brands bend over backwards to make ever more novel, avant-garde, and unexpected watches, Cartier’s twisted-looking Crash watch is still one of the most distinctive designs you will find. Its contorted shape and the story behind it make the Cartier Crash controversial and infamous, but since its introduction in 1967, Cartier has only produced a few editions of it. That’s understandable because of its obvious eccentricity, but in recent years the Crash has become the canvas for interesting designs and haute horology iterations like the Cartier Crash Radieuse introduced for SIHH 2018. 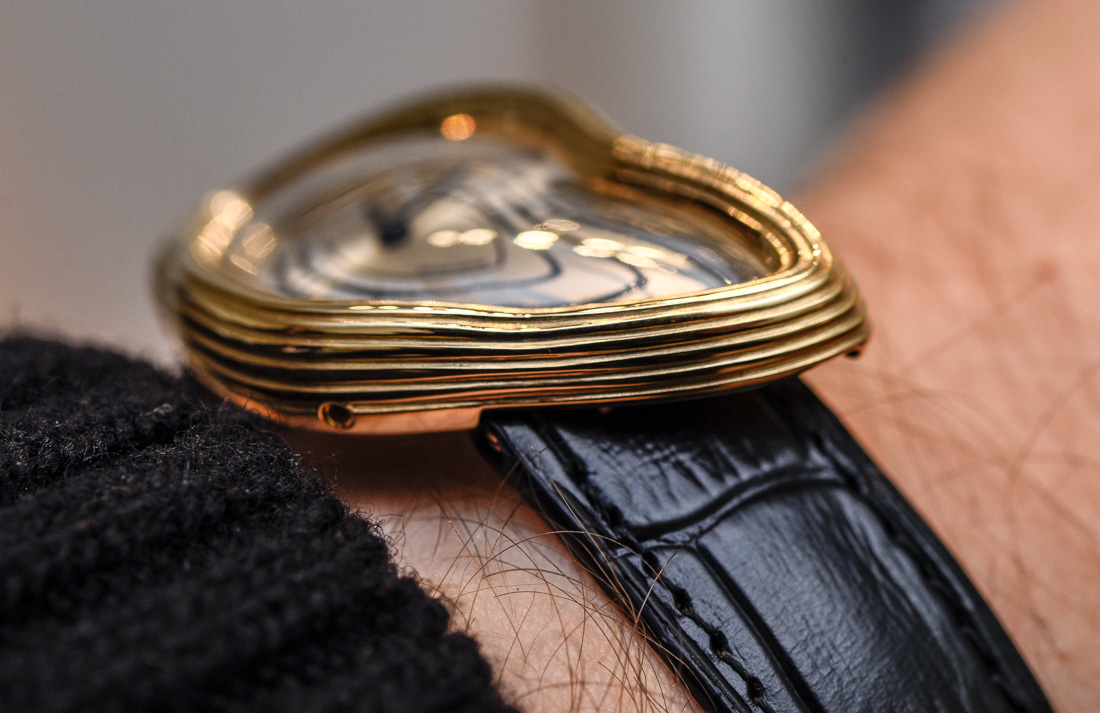 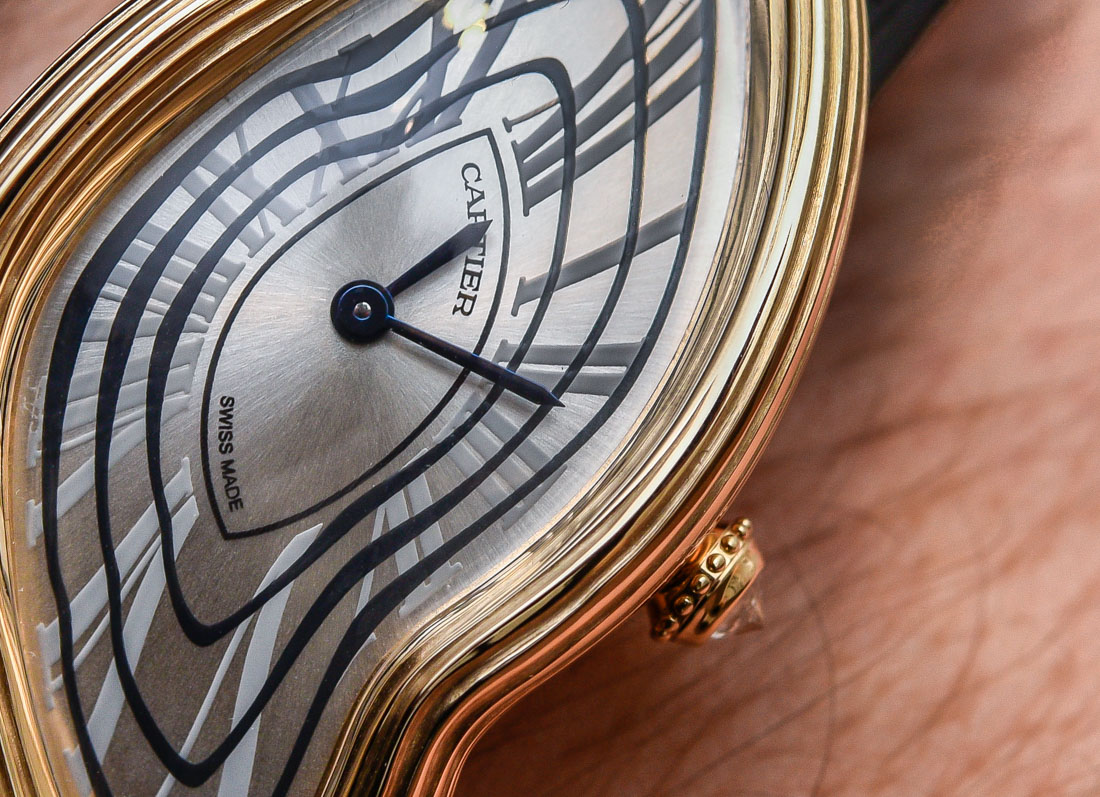 Even if many people already know the story behind the Cartier Crash, it is necessary and irresistible revisit it. The Cartier Crash began life as a Cartier Baignoire Allongé on the wrist of a Cartier vice president who was killed in a fiery car accident in London in the mid-1960s. The Baignoire Allongé (meaning “elongated bathtub” in French) watch has an elliptical shape kind of like that of an eye or an almond. In the wreckage, the Baignoire Allongé was found mangled and melted, and its distorted shape fascinated a Cartier designer and conveniently also was reminiscent of popular psychedelic and surrealist art of the period. 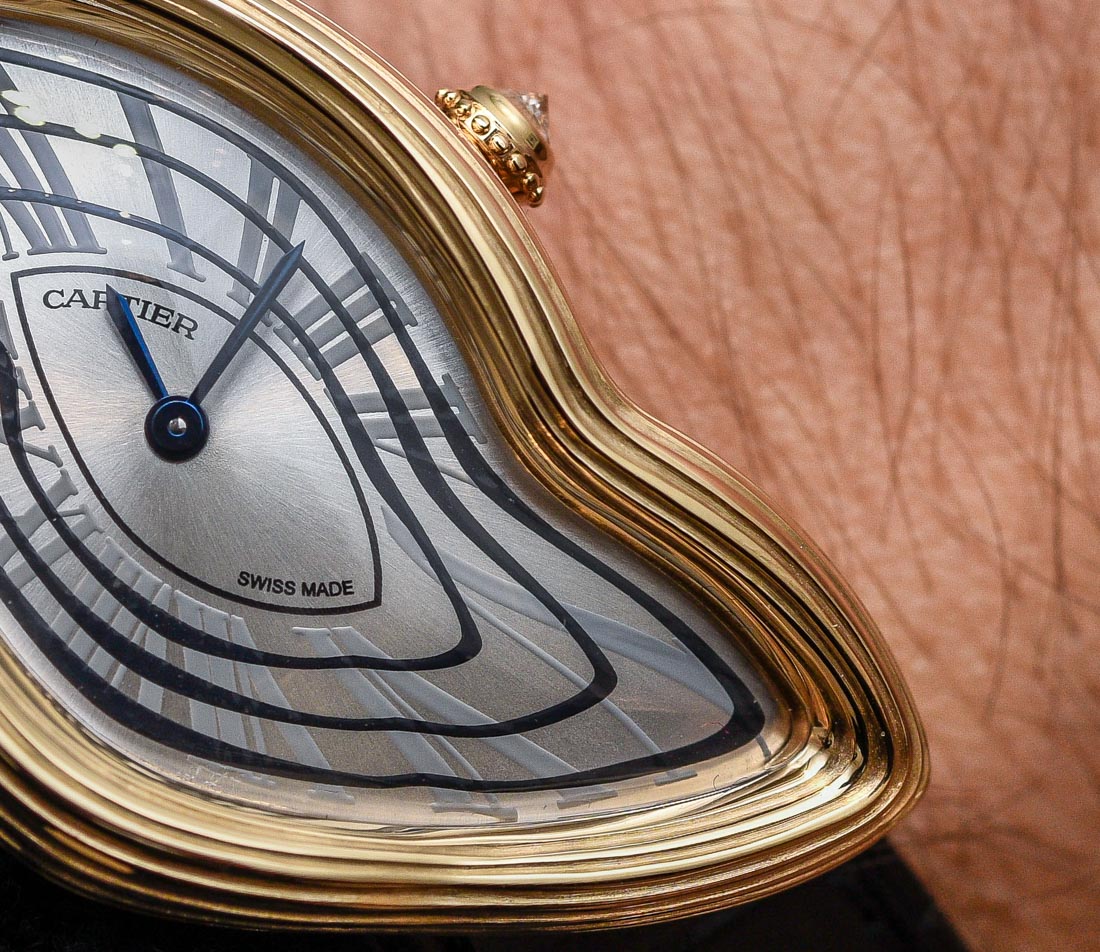 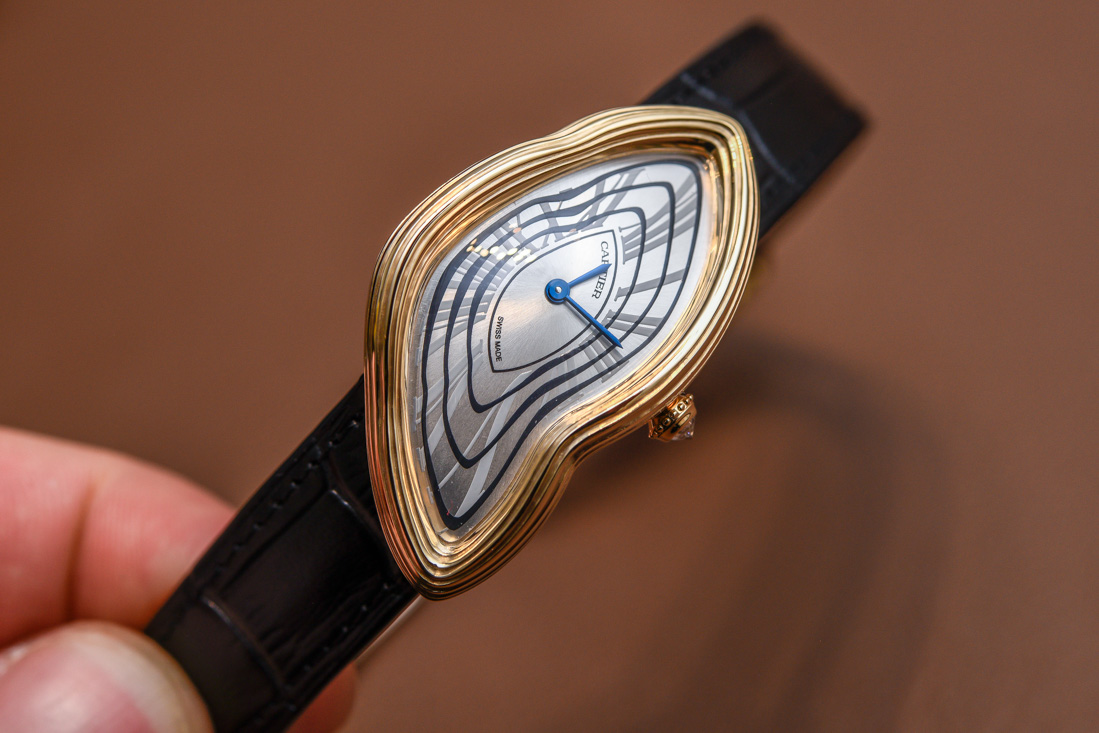 I don’t know if the Cartier Crash watch was intended as some sort of tribute to the accident’s victim, but its name at least helps keep the story alive. It has always seemed questionable in taste and a bit morbid to me, but hey, brands need to be a little edgy and controversial sometimes, I suppose. The Cartier Crash has been revisited a couple times since the 1960s as women’s watches, and then as a more haute horology interpretation in a men’s Cartier Crash Skeleton watch that we saw hands-on here in 2015. The Cartier Crash Radieuse is an artistic interpretation with less focus on the horology than the Skeleton, but it does contain a mechanical movement. 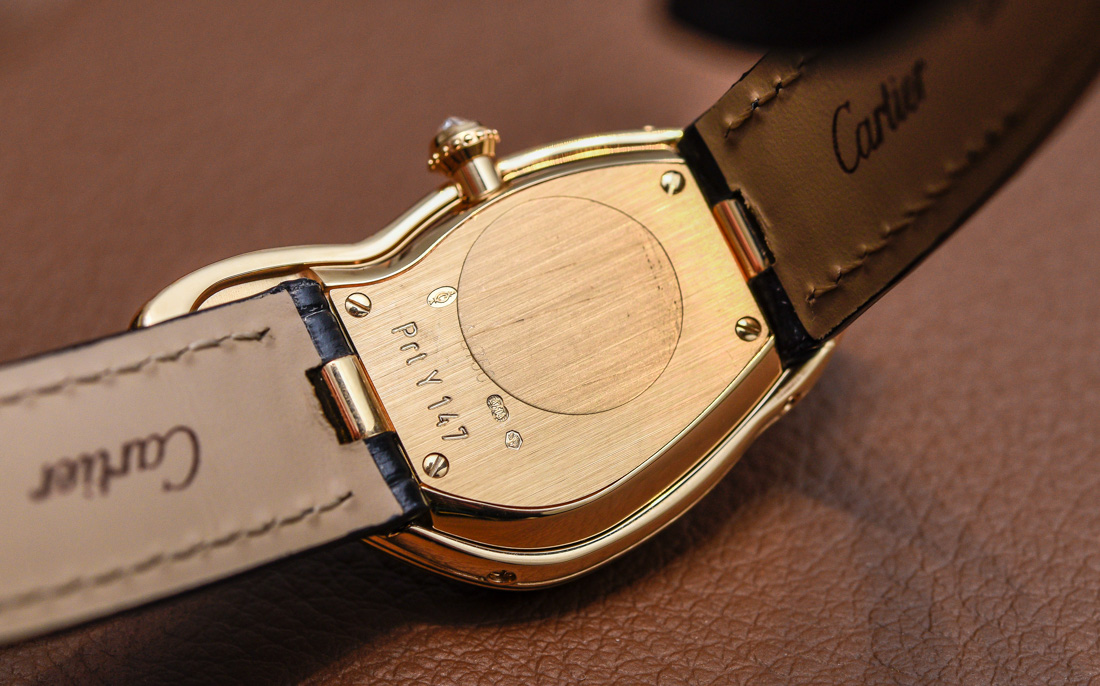 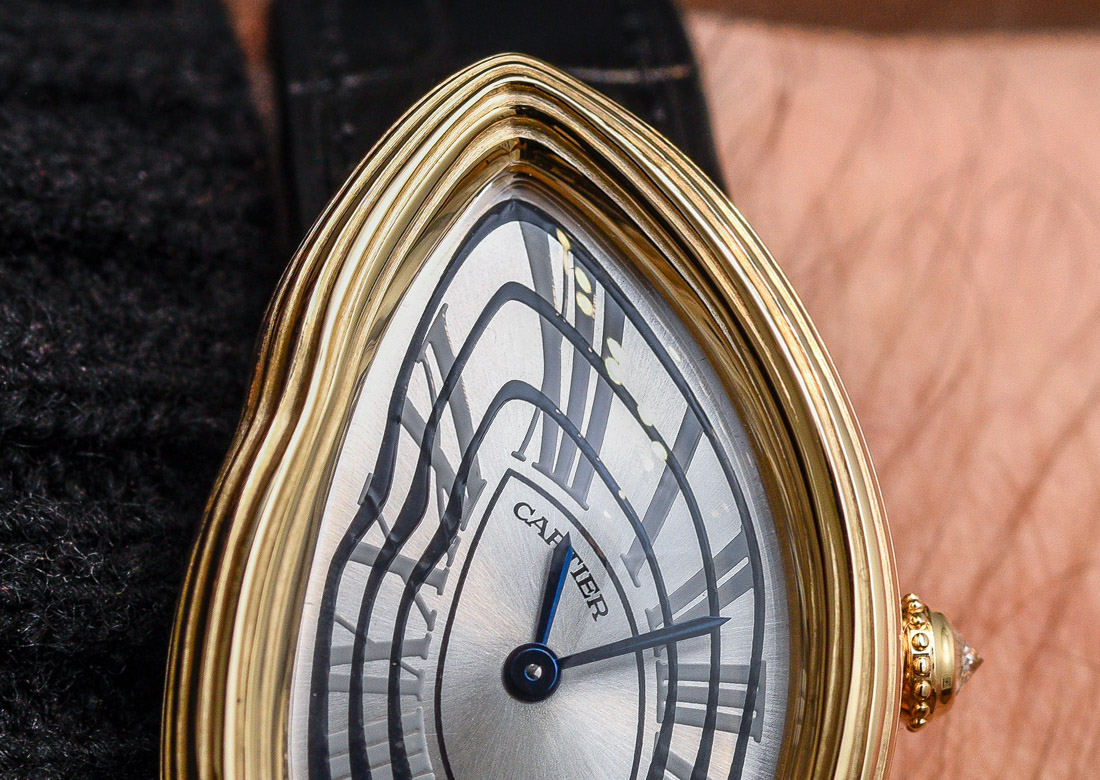 Around this point in most watch articles, we would at least want to give you the case dimensions and other technical specifications like, say, water resistance. However, the Cartier Crash’s unorthodox case shape and artistic nature make such things seem abstract – and Cartier hasn’t provided them. I would say that it is pretty close in length and width to the Crash Skeleton watch (linked to above), and you can get a good idea of how it wears on David Bredan’s wrist in these photos. The strap attaches at the underside of the case, which helps its potentially awkward shape fit the wrist better. We do know that the case is in yellow gold. I am assuming water resistance is the industry standard minimum of 30m for a watch such as this. 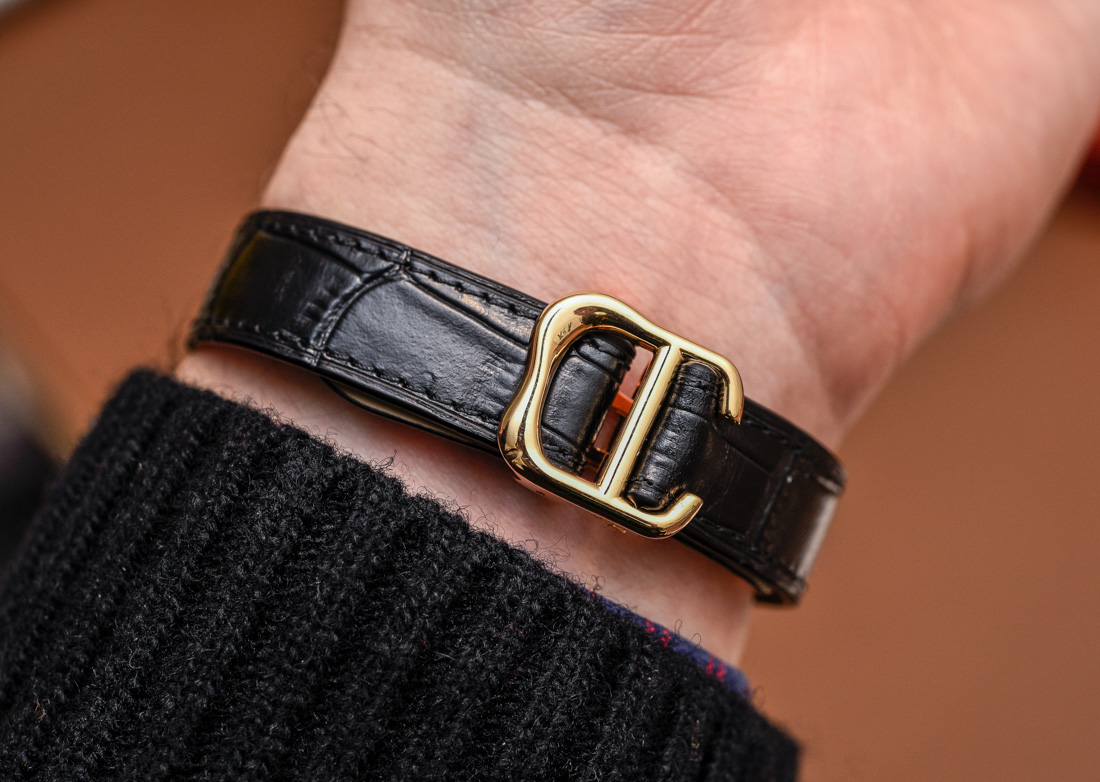 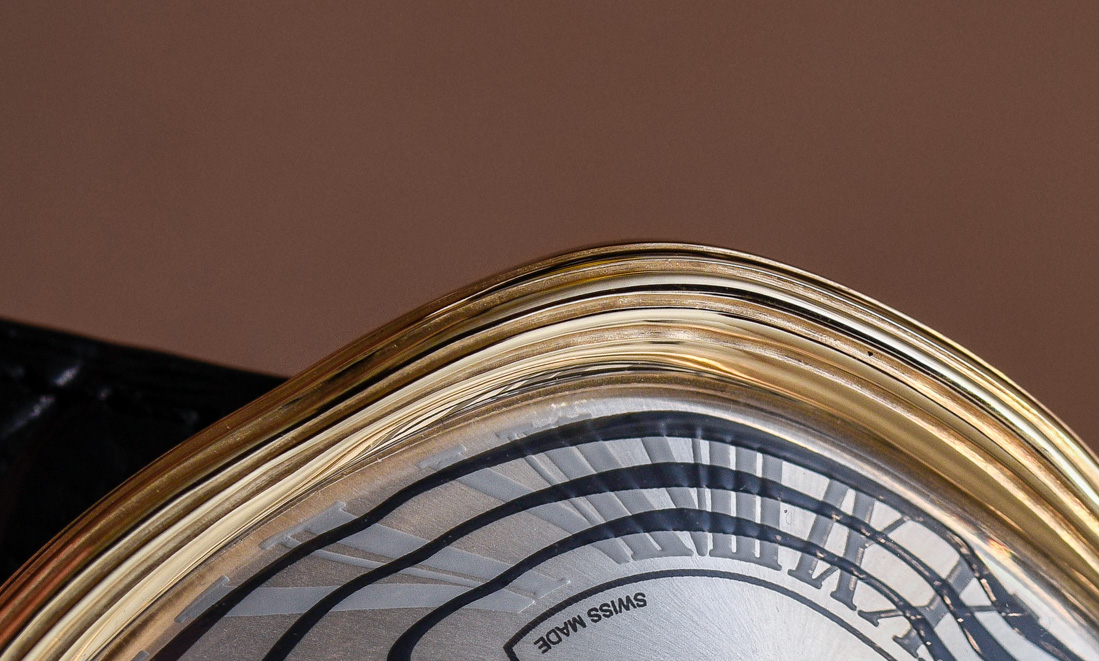 I’m afraid that Cartier has also not disclosed much information on the manually wound 8970 MC movement found inside the Cartier Crash Radieuse. The Cartier Crash Skeleton used a cool movement, the 9618 MC, that was specially designed to follow the idiosyncratic form of the Crash case. Given the Radieuse’s price, I would hope that the 8970 MC is similarly specific to this shape, but there is not really any need for it since it can’t be seen from either the dial side or the case back, and any movement that fits would probably do the timekeeping trick. We have to assume that the 8970 MC is a variation of the 8971 MC, as found in the Cartier Tank Louis Cartier 100th Anniversary watch. That movement, in turn, is apparently based on the Jaeger-LeCoultre 846, which would mean it operates at 3Hz with a power reserve of 36 hours. 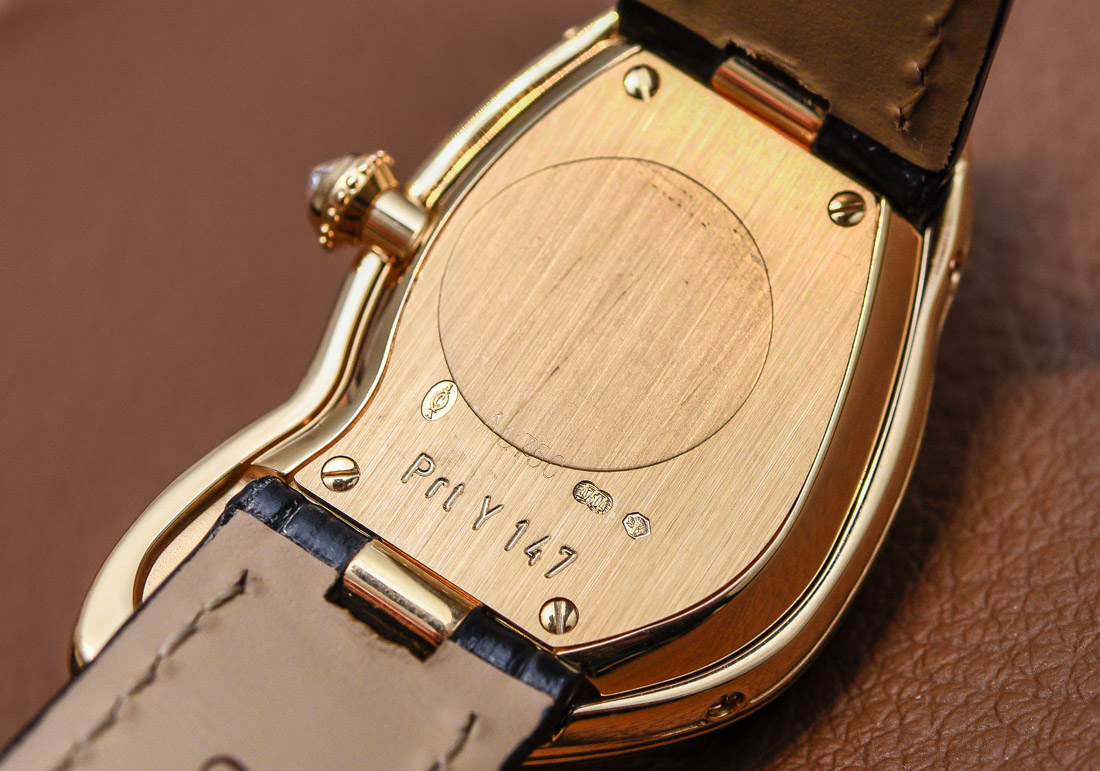 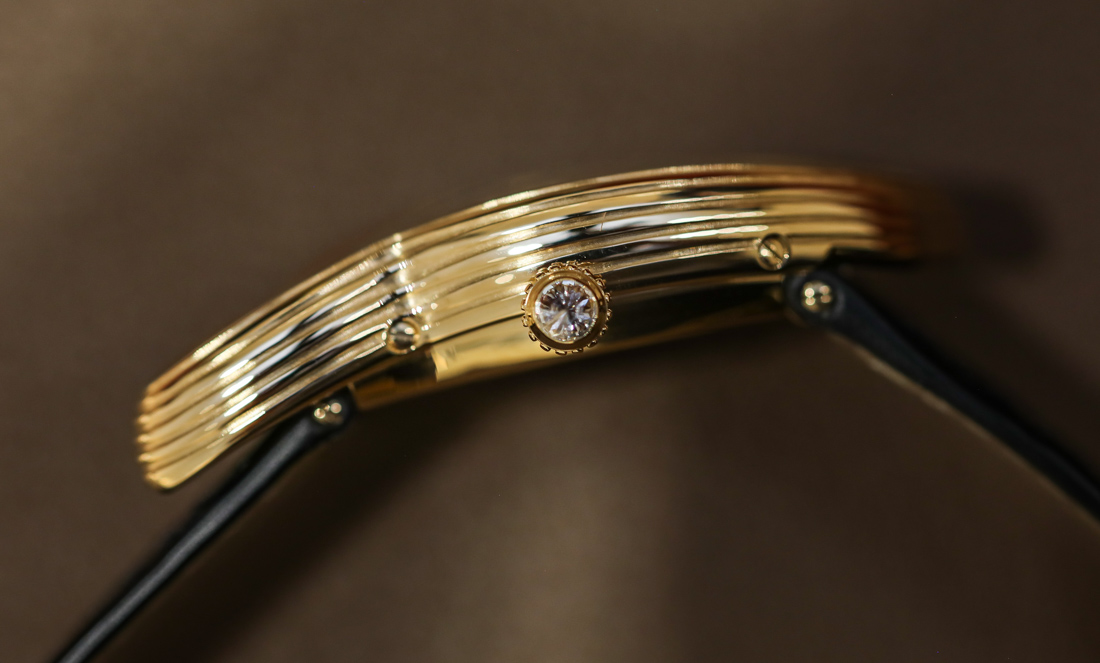 Aesthetic elements of the case and dial are what distinguish this Radieuse version of the Cartier Crash. The obligatory Roman numerals (we could call them Cartier numerals) appear faded in a light gray with strong black lines that look like ripples on water emanating from the center with petite blue hands in a style found on many Cartier watches. The ripples seem to continue onto the case (or bezel) in what Cartier calls gadroons – /ɡəˈdro͞on/ noun “a decorative edging on metal or wood, typically formed by inverted flutings,” says Google. 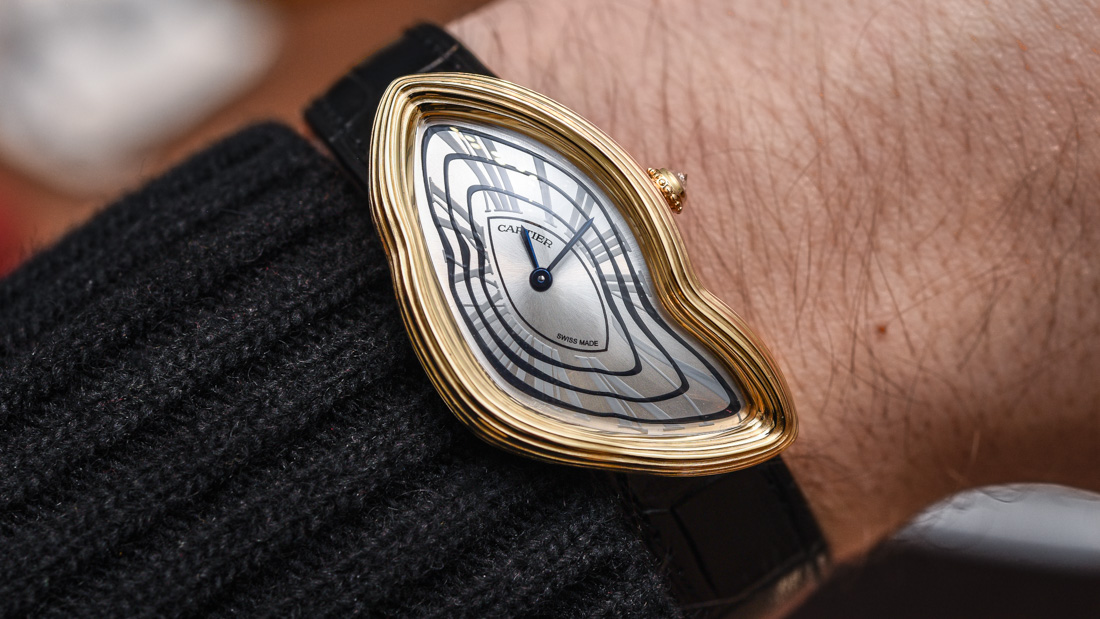 What one could call “alternative” case shapes are a big part of Cartier’s brand identity. While Cartier can claim to have invented the non-round wristwatch, and the wristwatch itself, as well as having probably more such “shaped” cases than any other watch brand out there, the Cartier Crash takes that idea quite a step further – as if taken from Salvador Dalí’s famous painting of clocks melting in the desert. The Cartier Crash is the kind of asymmetrical shape that is captivating partly because it seems like it couldn’t (or wouldn’t) be planned. The Cartier Crash Radieuse is limited to 50 pieces with a price of $40,700 each. Learn more at cartier.com