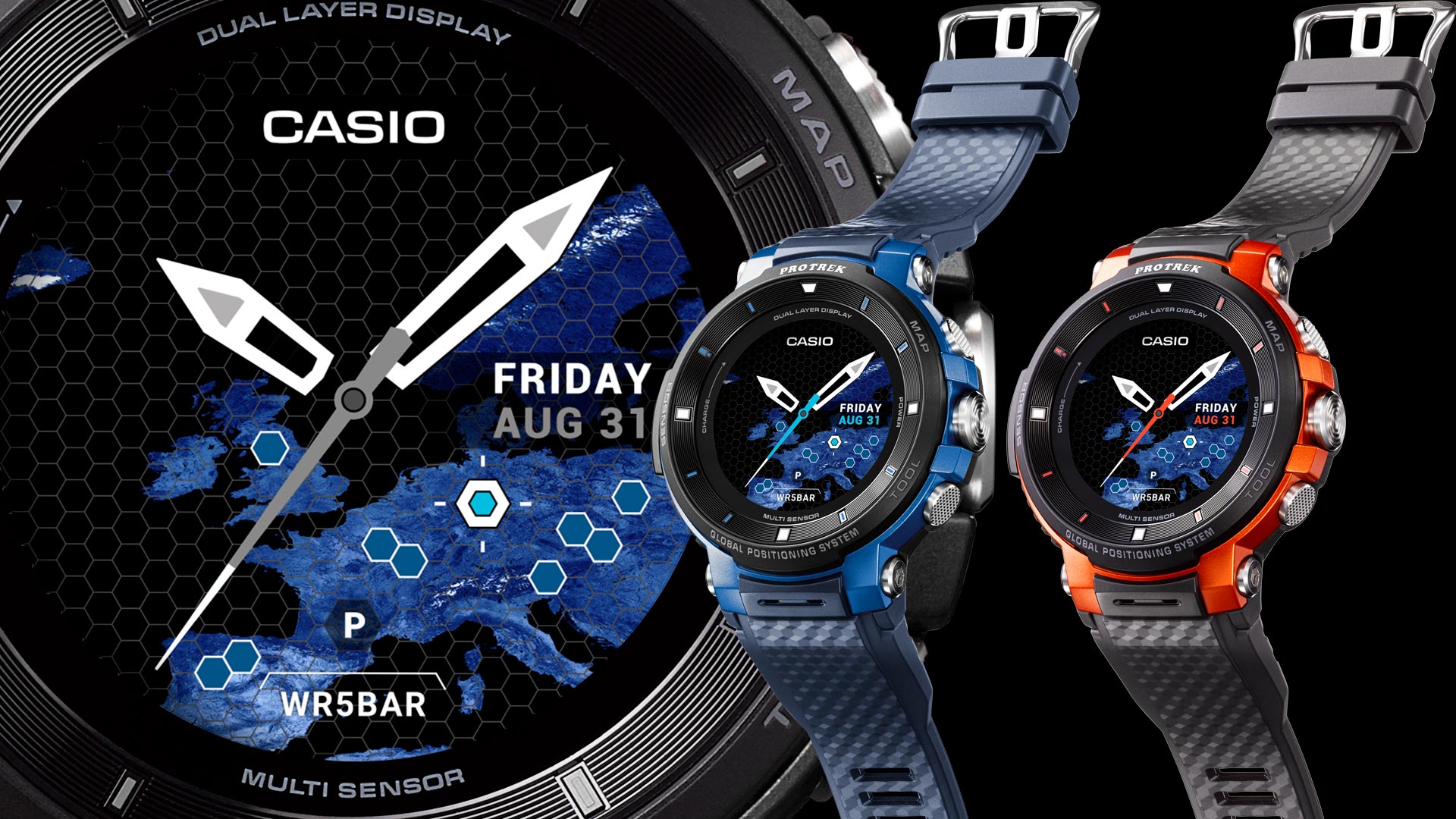 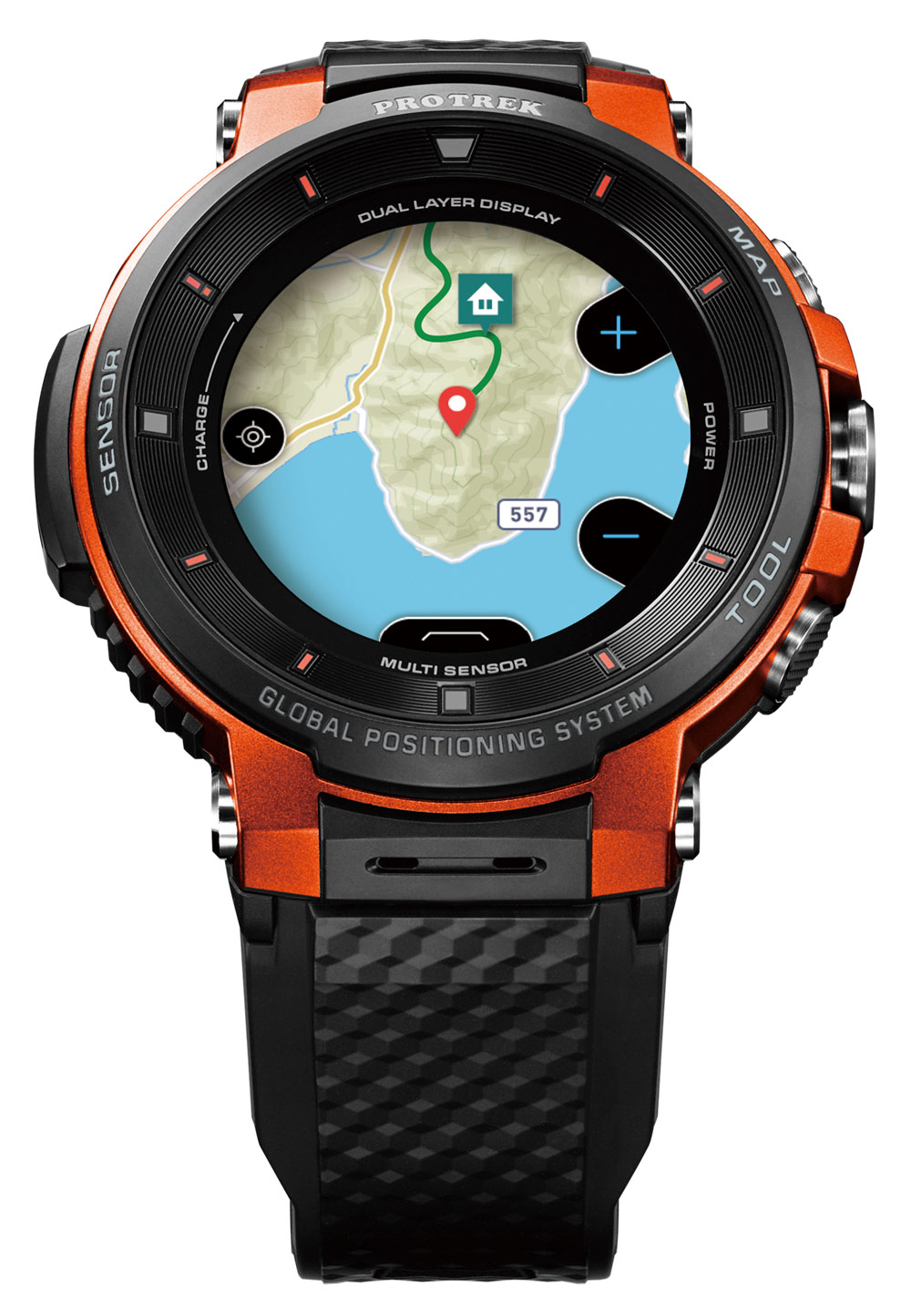 The latest generation of Casio‘s outdoor activity-focused Protrek smartwatch is the Casio Protrek Smart WSD-F30 which incorporates some updates that a lot of people will appreciate. Perhaps most important to consumers attracted to its functionality but intimidated by the near 57mm-wide case of previous generations, however, is an ever so slightly more wearable size and sleeker design. Also notable is the color maps that are now said to be usable for up to three days on a single charge. With each generation, version, or update of any smartwatch, as with other computer technology, comes incremental steps toward the goal ideal functionality and wearability, so let’s take a look at what the Casio Protrek Smart WSD-F30 offers. Funny, we were just talking about Protrek earlier today with this review of the Casio ProTrek PRG330 Outdoor Watch. 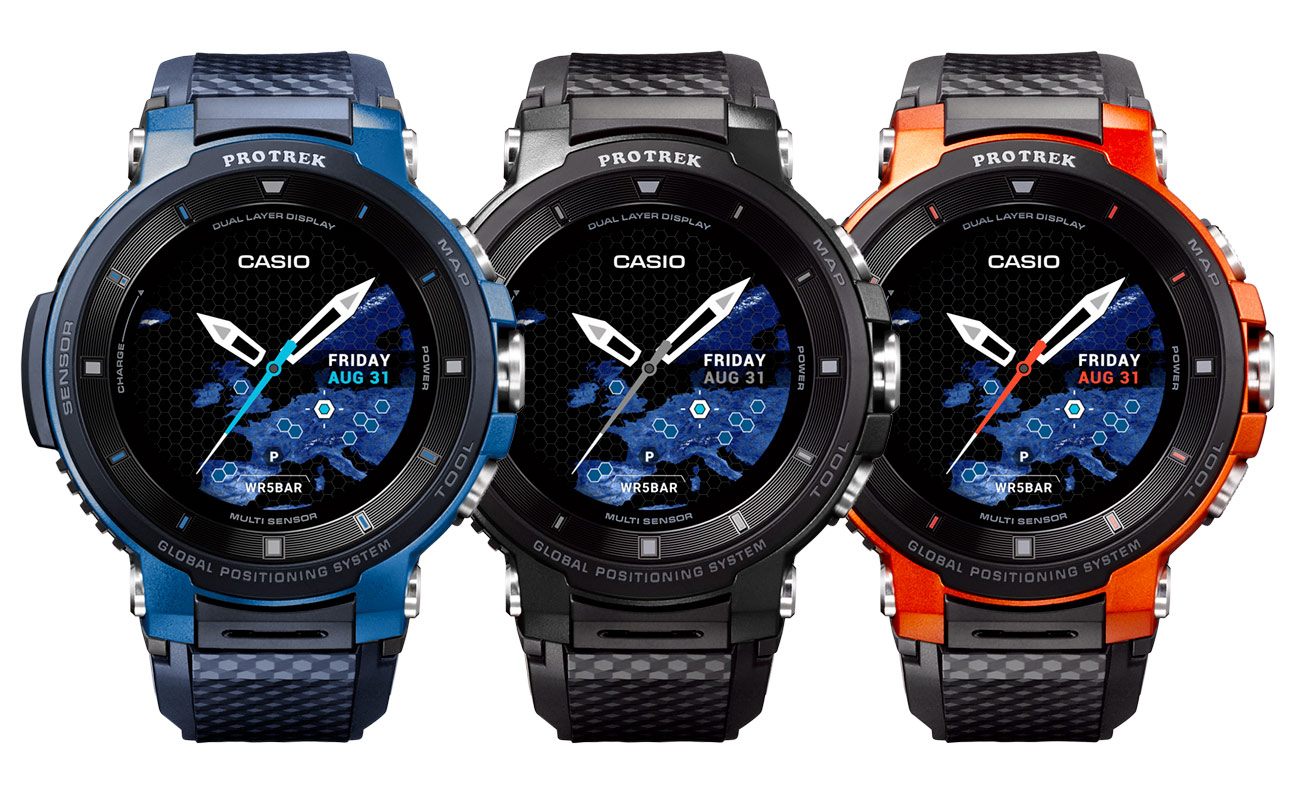 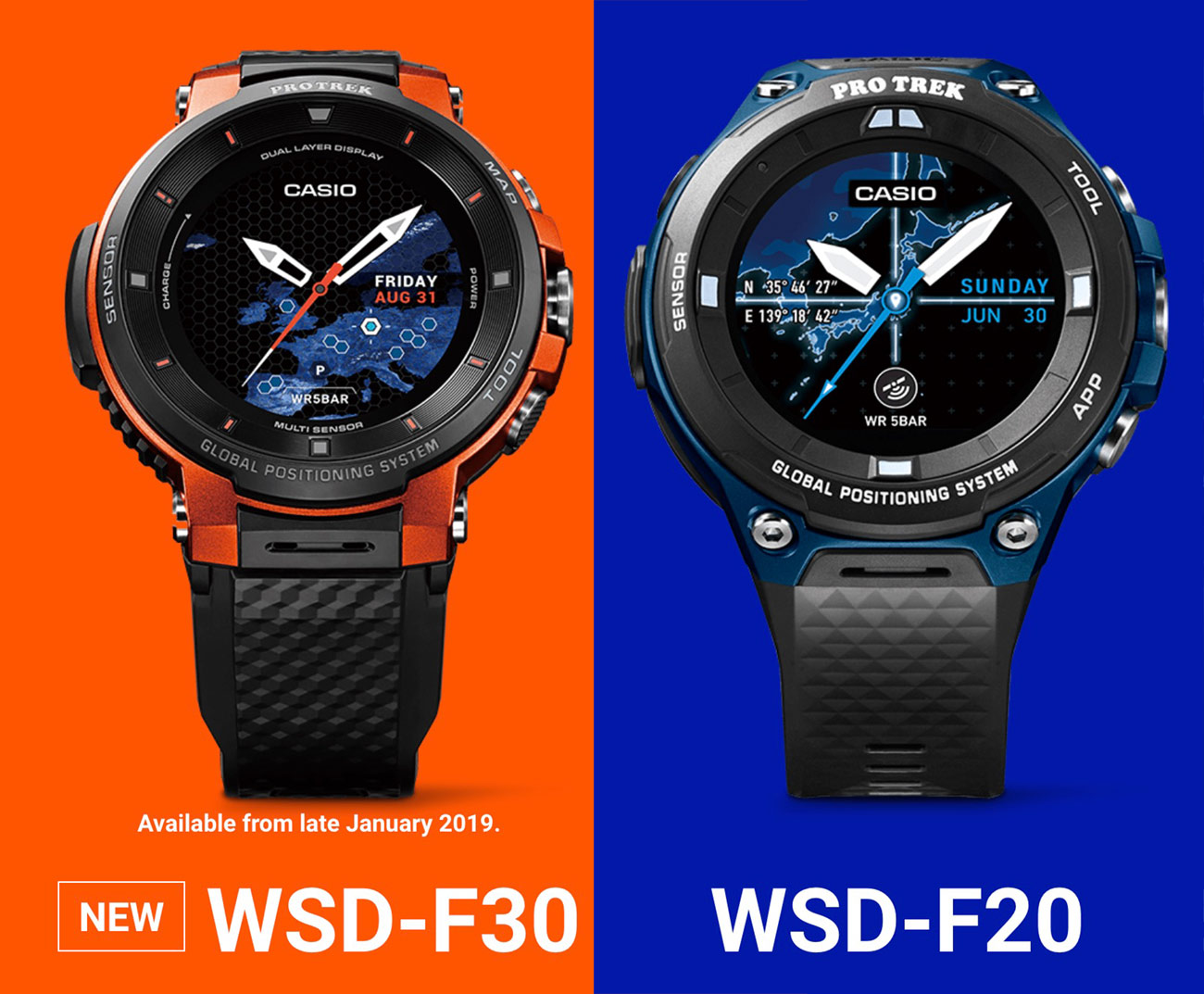 The Casio Protrek WSD-F10 was Casio’s proper entrance in 2016 into the smartwatch market, though many Casio products had been offering various levels of connected functions and other features associated with the technology. Allow me to just note that the term “smartwatch” seems to have never been strictly defined and consequently has been appropriated by some brands latching onto the media buzz when something like “connected watch” would have been more accurate to distinguish between activity trackers with phone notifications and something as full-featured as, say, the Apple Watch. In any case, with Google’s Wear OS (the operating system formerly known as Android Wear, compatible with phones running Android 4.4+ or iOS 9.3+), touchscreen, apps, GPS, and many other conveniences modern consumers know and expect, Casio’s most certainly fit just about any such definition. 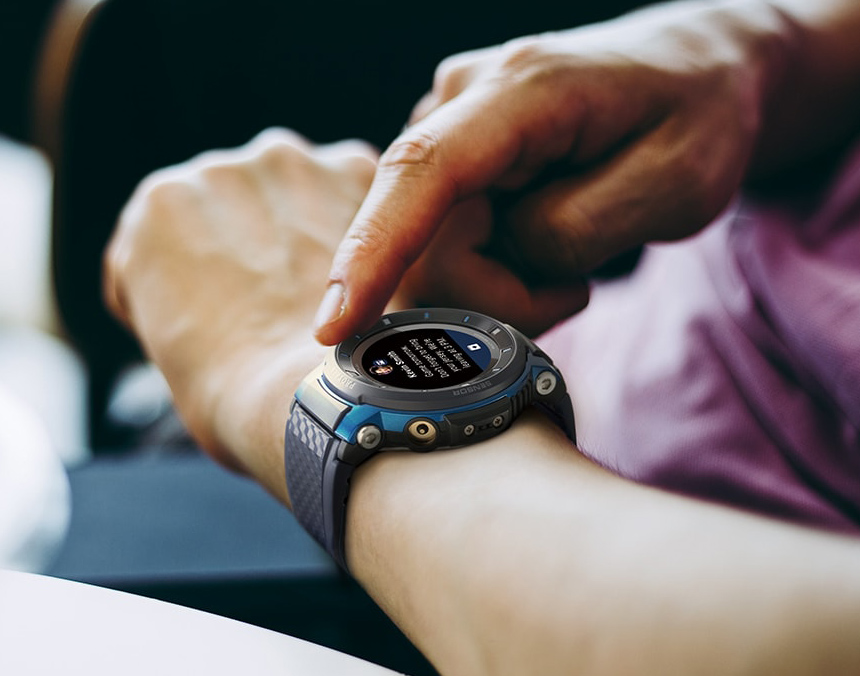 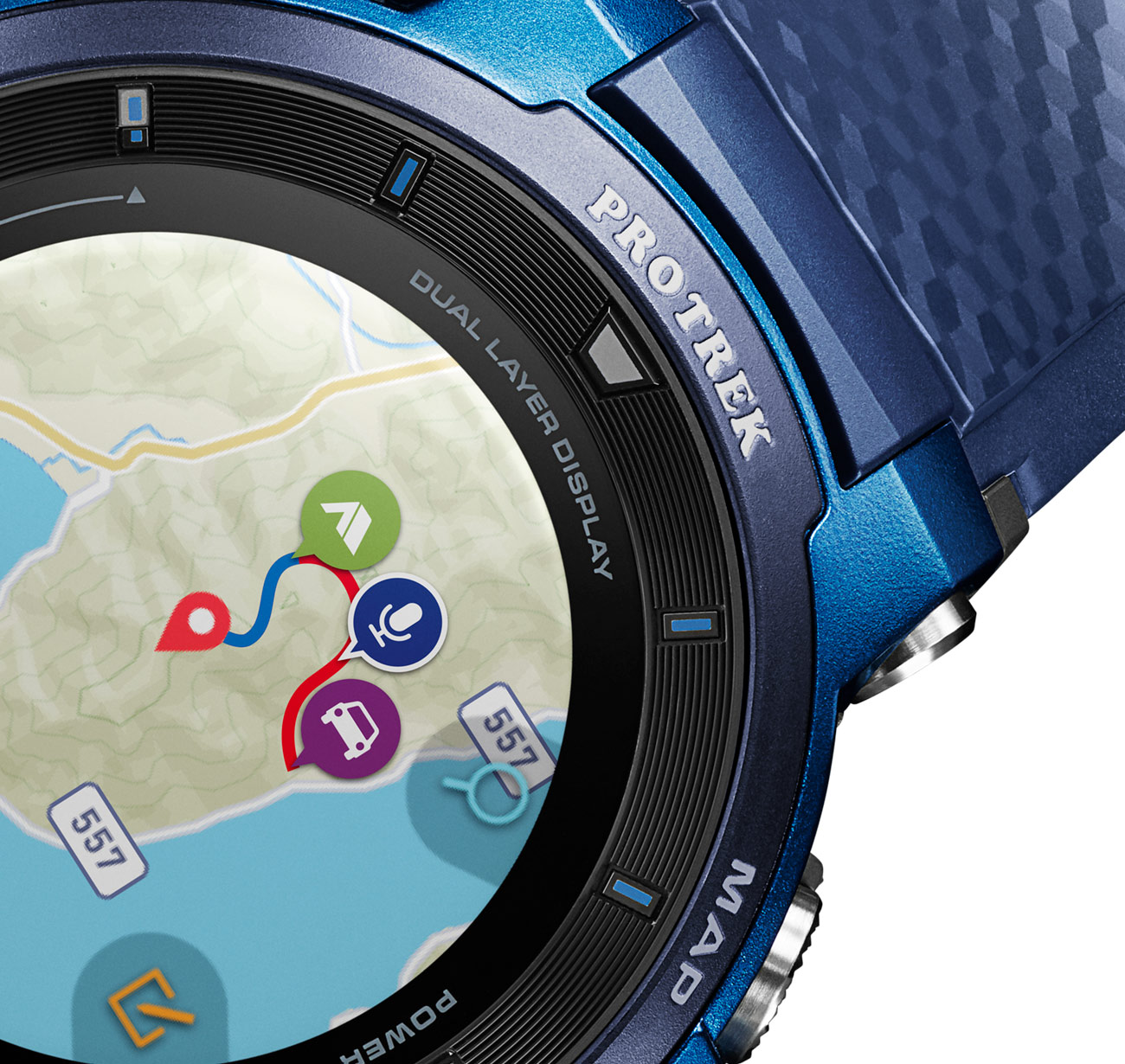 The Protrek WSD-F20 (reviewed here) built upon the F10 with things like GPS compatibility, and versions with cosmetic changes also kept adding more features like the color maps in the still recent WSD-F20A. One of the features that Casio especially emphasizes for the new Casio Protrek Smart WSD-F30 is the battery-saving features that allows use of the offline color maps and GPS log recording for up to about three days on a single charge using what they call Extend Mode. The idea of Extend Mode is that power is conserved in a couple ways including managing standby mode which the user can set and control. Also, time and other measurements are displayed on a monochrome screen, while the maps are accessible via one of the buttons rather than remaining on. 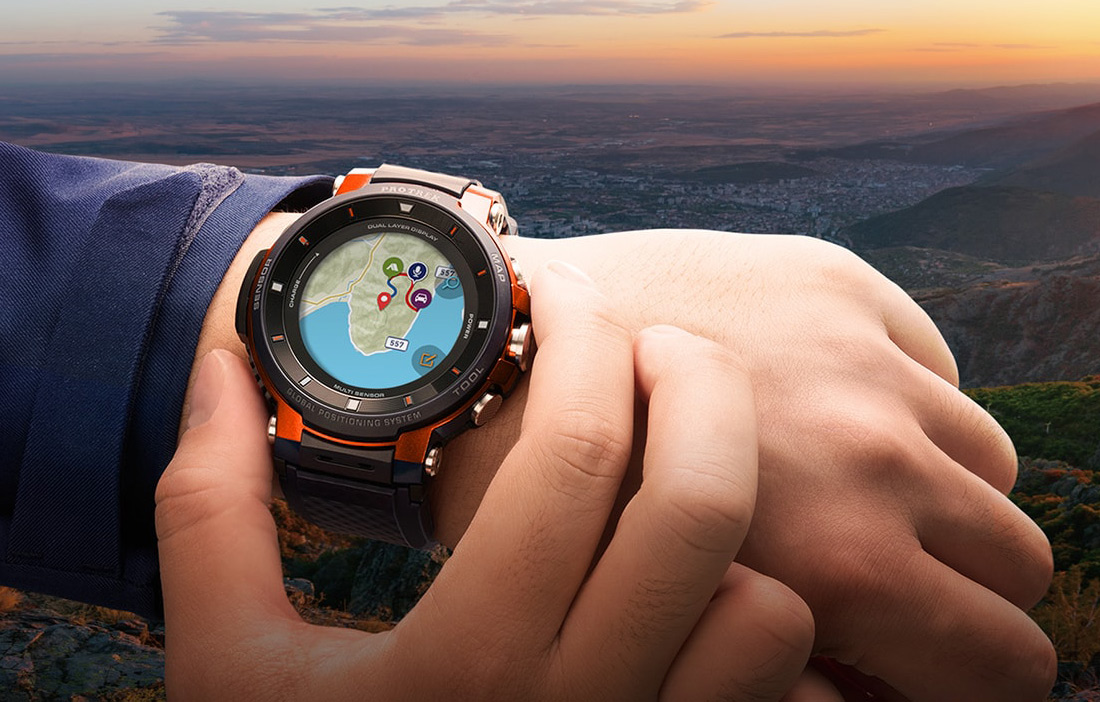 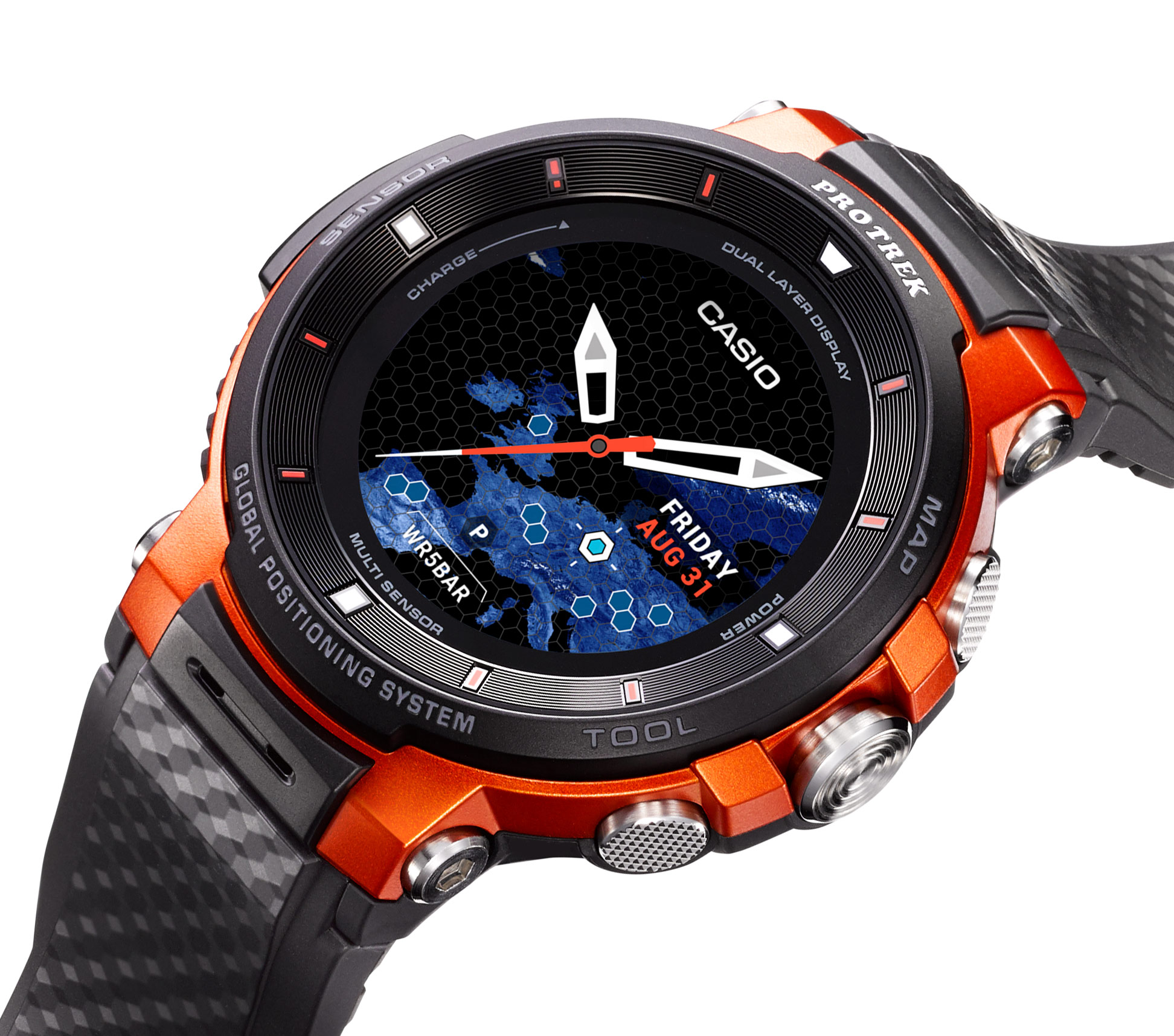 Battery life is the name of the latest technological race, at least in the smartwatches field. The Samsung Galaxy smartwatch was recently updated with a focus on improving battery life, and in its current Series 3 version the Apple Watch promises about 18 hours of battery life. These companies can really only give estimates and there are a lot of variables involved, so you can never really make a 1:1 comparison of battery life for various smartwatches. The Casio Protrek Smart WSD-F30 uses a lithium ion battery that is charged via a magnetic charging terminal. We mentioned Extend Mode above which helps save battery life. In Multi Timepiece Mode — meaning timekeeping and sensors only, presumably similar to one of the “non-smart” Protrek watches — with Wear OS disabled, Casio promises roughly one month of battery life depending on use, naturally. In full smartwatch mode with “normal use,” one full charge gets you roughly 1.5 days. 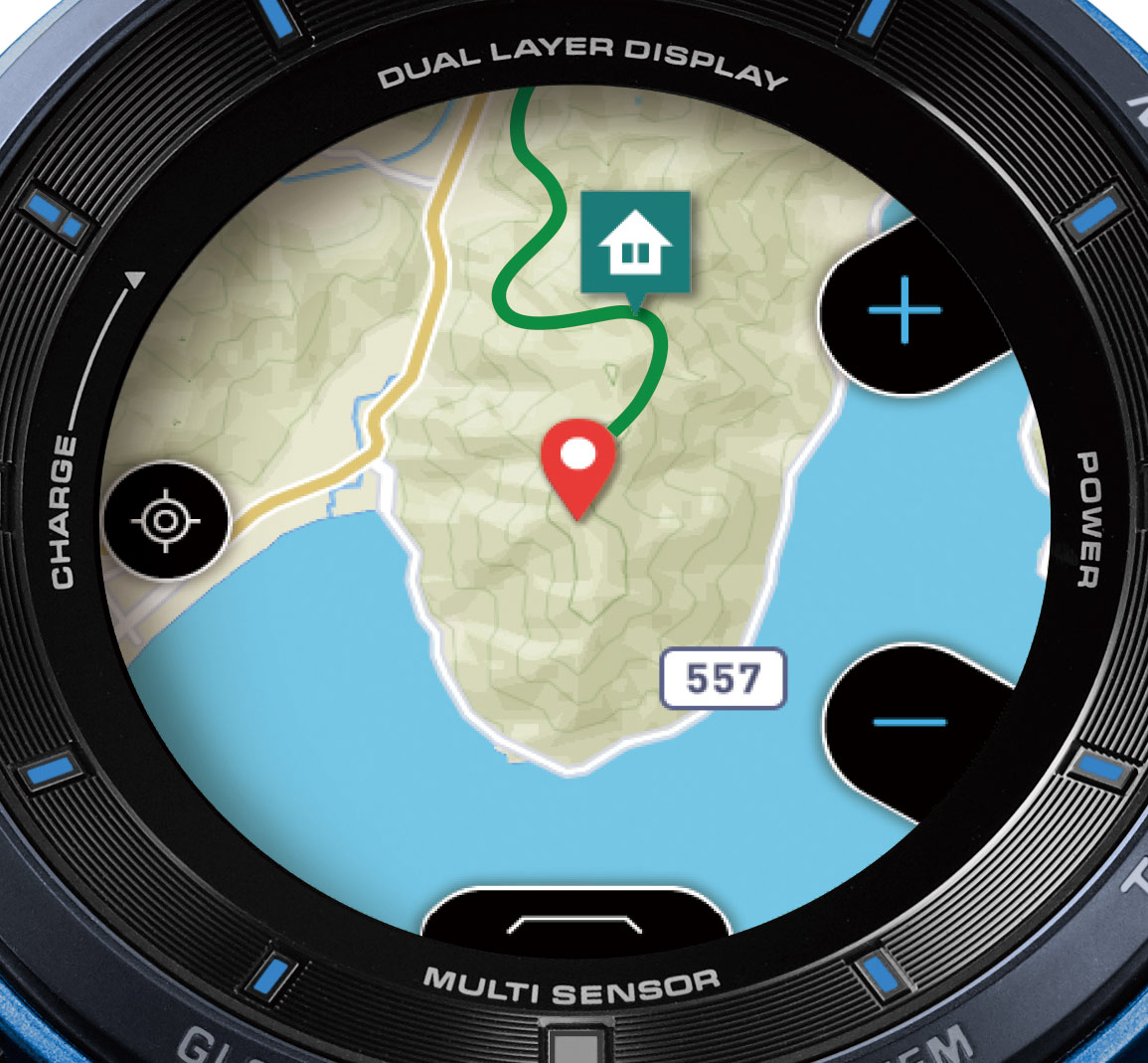 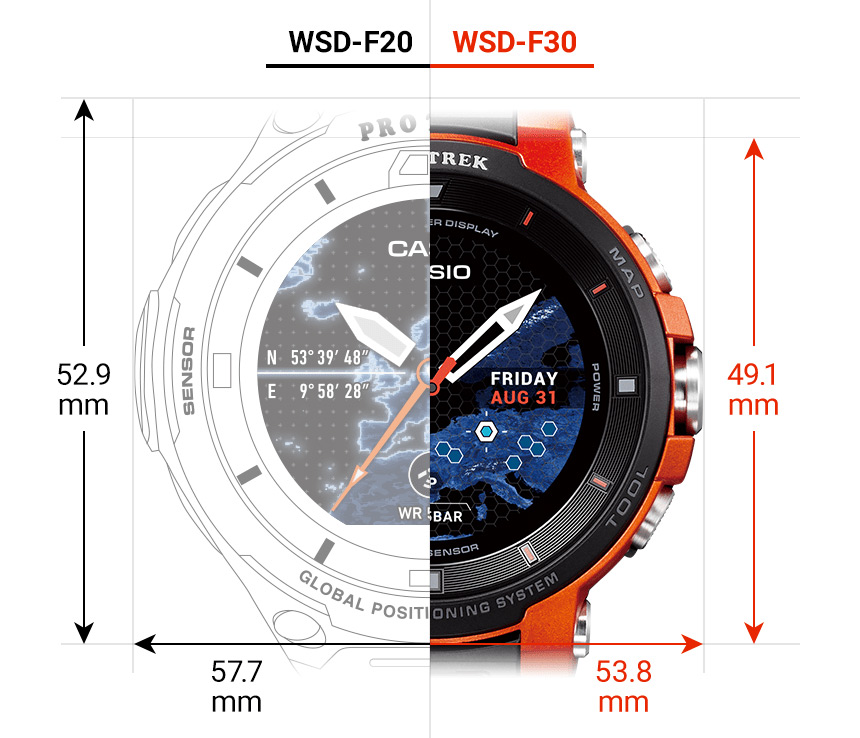 The updated looks and size of the Casio Protrek Smart WSD-F30 will make a big difference, in my opinion. I believe that the WSD-F10 and WSD-F20 were both 56.4mm wide, by 61.7mm long, and 15.7mm thick, but we will note that while large for many wrists and compared to many watches the wearability was aided greatly by its plasticky lightness. The new Casio Protrek Smart WSD-F30 is 53.8mm wide, 60.5mm long (“lug-to-lug”), 14.9mm thick, and 83g on its strap. That is 3.9mm narrower and 0.4mm thinner. This is all relative and somewhat abstract until we can try one on the wrist, but needless to say, it’s a welcome change. More fun to discuss is the new and, in my opinion, improved design. The case shape looks more sleek to me, and Casio says the resin bezel uses a “nano treatment” producing a metal-like, “luxurious” feel. 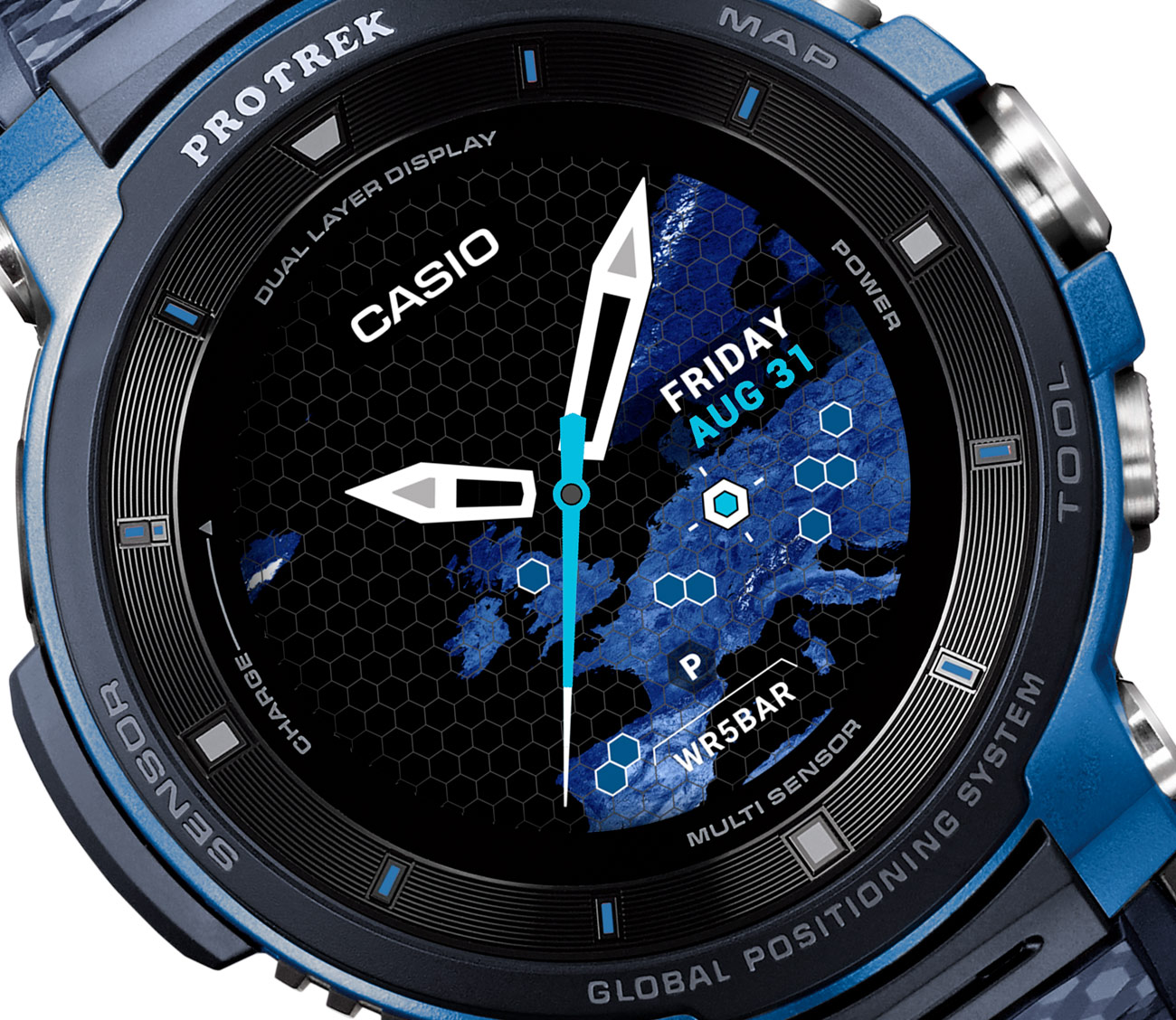 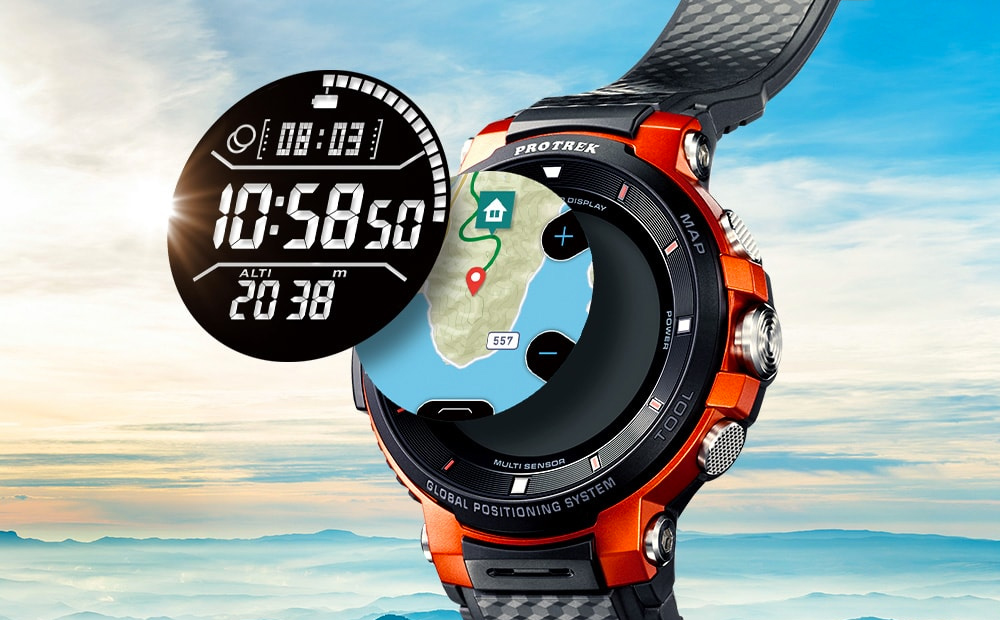 The new Casio Protrek Smart WSD-F30 also upgrades the display for finer detail of the maps and data with what they say is a dual-layer, organic EL display. Dual-layer means one that is monochrome LCD for the time and certain other data, and that is above an OLED color layer for things like maps. So separately keeping the color screen off is part of how Extend Mode works to save battery. The OLED display is 1.2 inches with a 390×390-pixel resolution, and there is a capacitive touchscreen with an “anti-fouling” coating, which I guess you might rephrase as “fingerprint-resistant.” 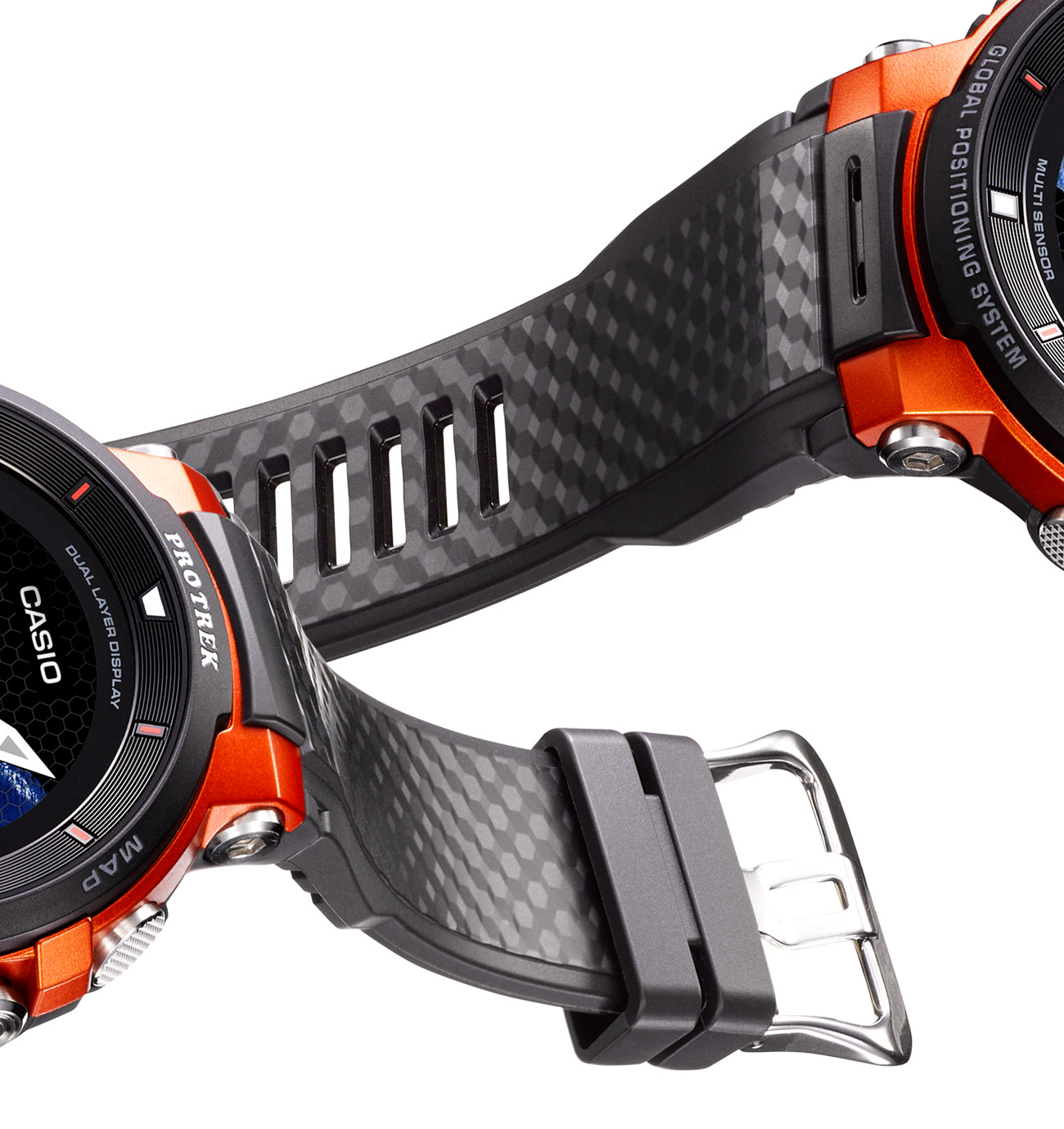 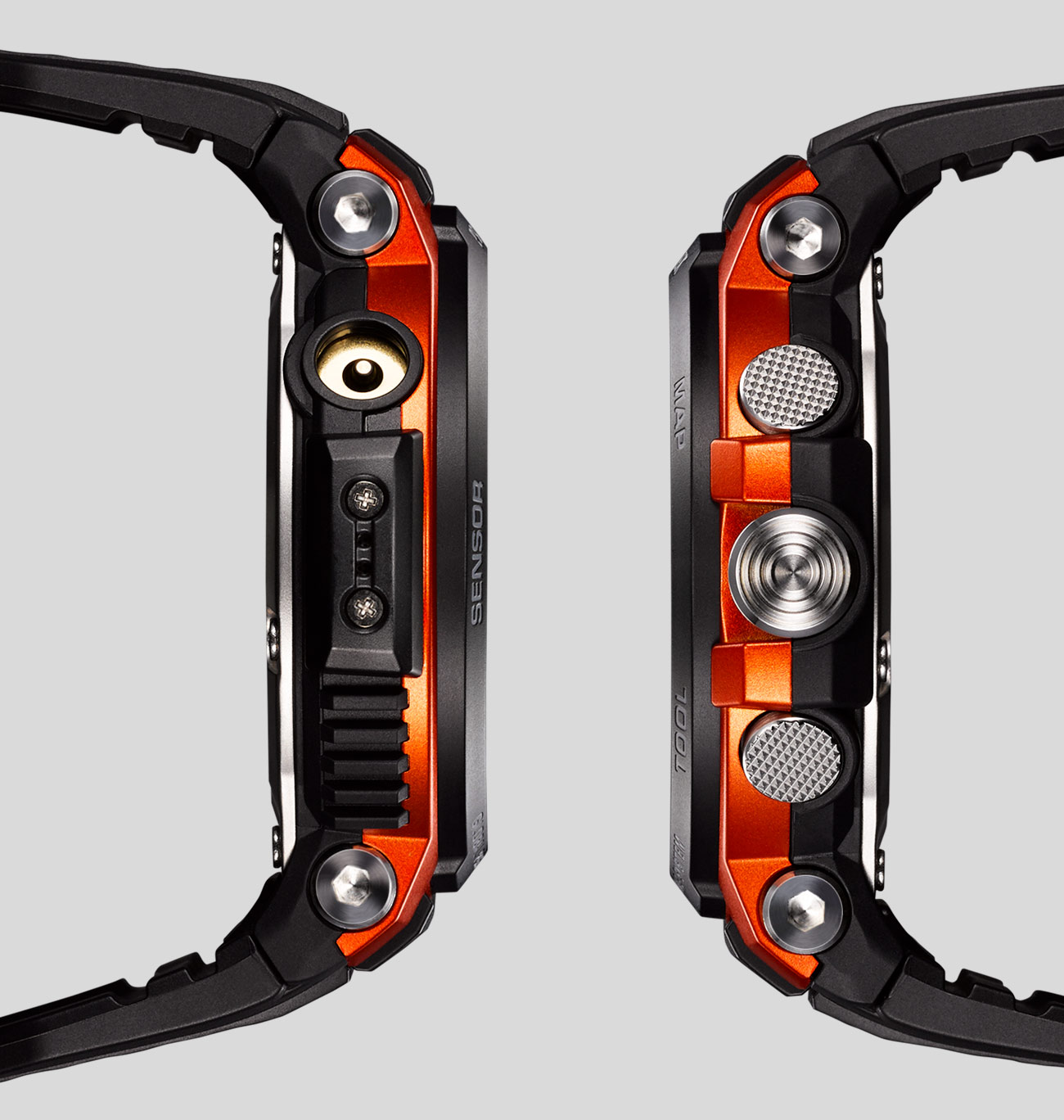 Casio added “Smart” to the name of the Protrek WSD-F watches to help distinguish from the rest of the Protrek line that still include a lot of features like sensors, timers, time zones, alarms, and more that only seem basic in comparison to smartwatches’ relatively vast world of functionality. Besides its smartness, the Casio Protrek Smart WSD-F30 includes Casio’s latest sensors for air pressure, altitude, accelerometer, gyrometer, and compass. In accordance with US military standard MIL-STD-810 the Casio Protrek Smart WSD-F30 is resilient to cold weather down to -10 degrees Celsius and water-resistant, like its predecessors, to 50m. 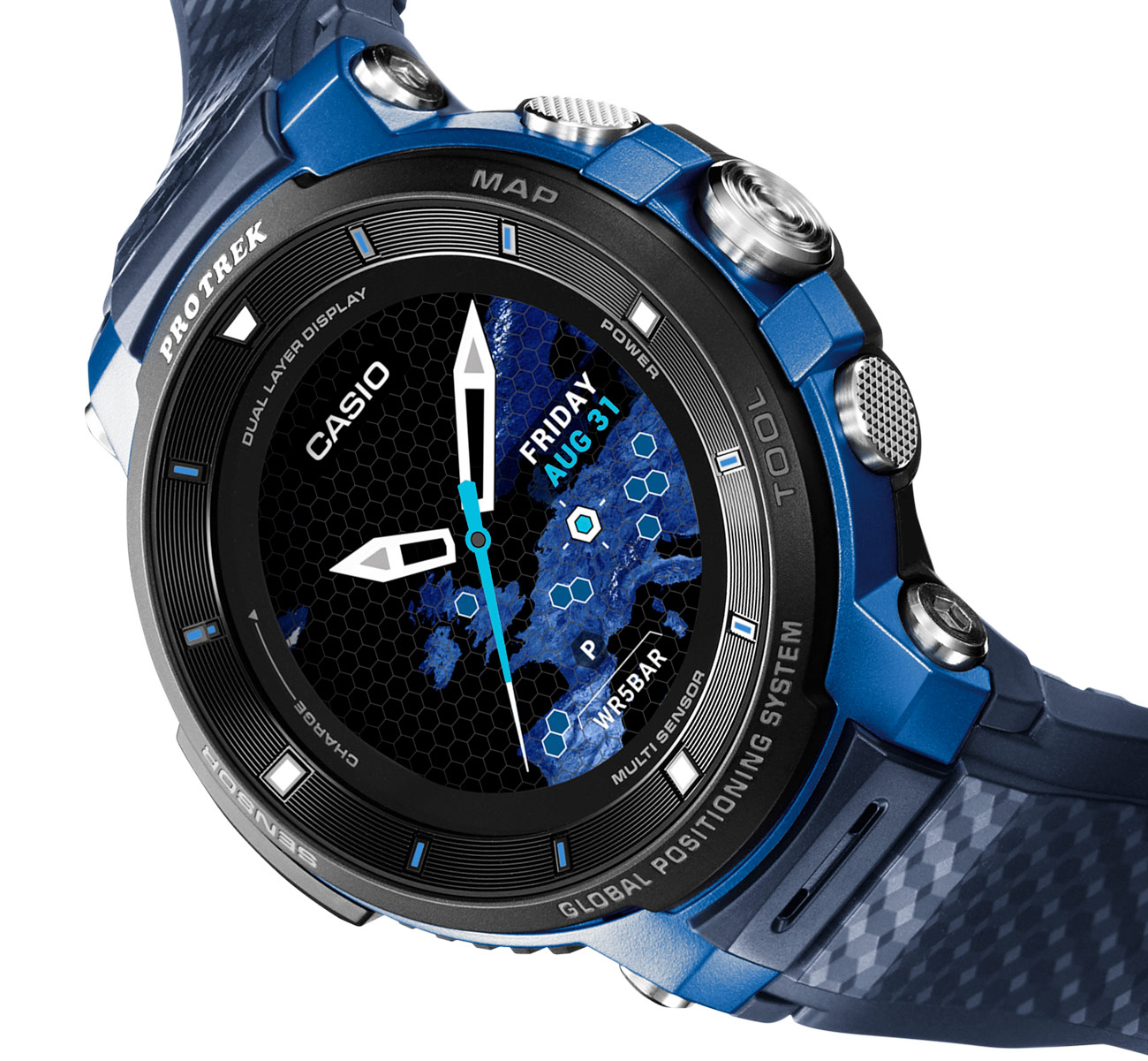 The Casio Protrek smartwatches are getting continually better. I remember what a difference for wearability the downsizing of the giant Protrek made when the Protrek PRW-3000 came out — in fact I’m wearing one of those as I write this article, and it’s still great. So it seems like the right direction that Casio and, in fact, the whole smartwatch industry are going with more attractive sizes, designs, functions, and battery life. The Casio Protrek Smart WSD-F30 has a retail price of $549 and comes in three color variations of black, blue, and orange. It will be available in the US from January 2019. More info and specs on Casio’s website. wsd.casio.com