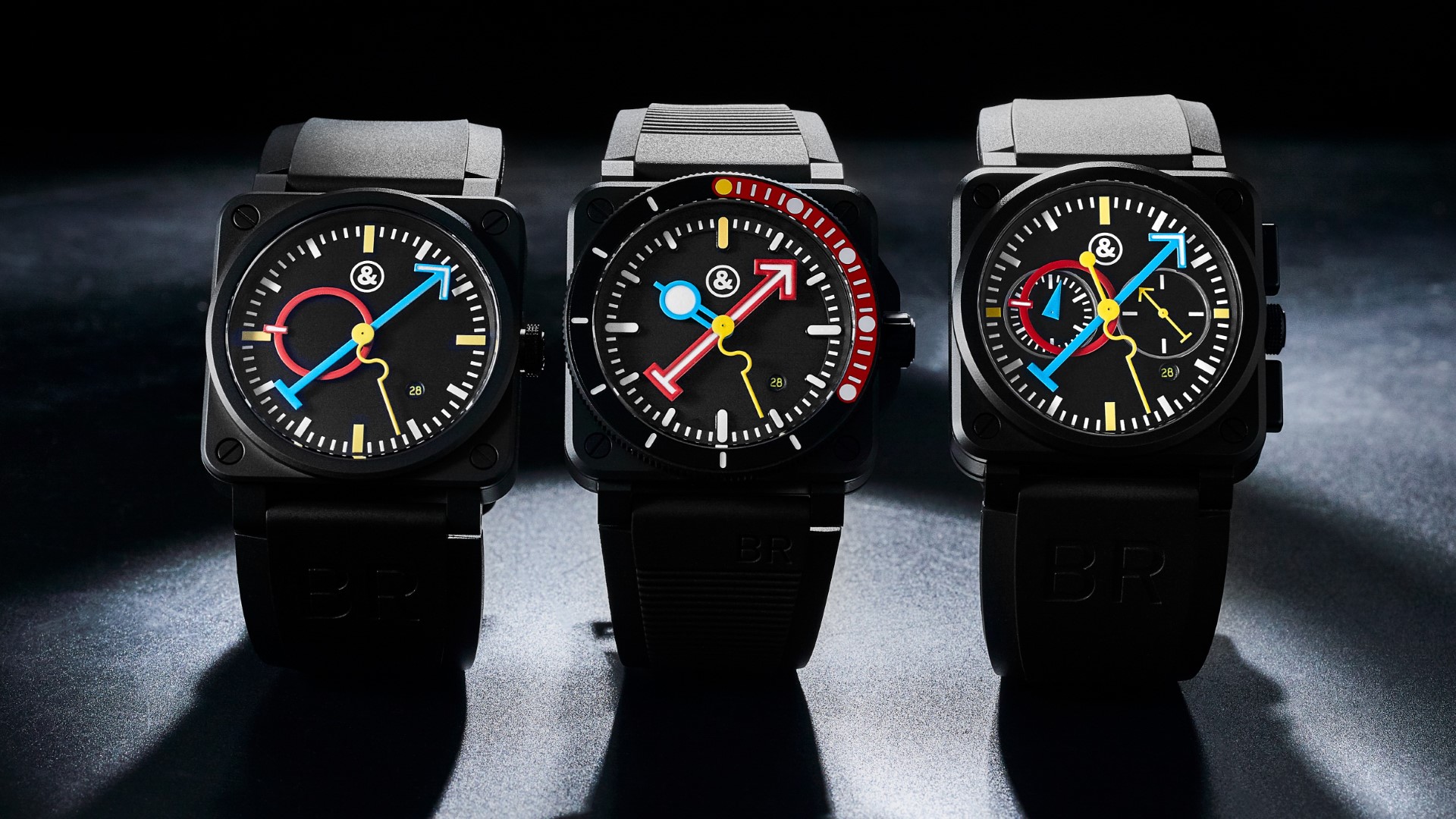 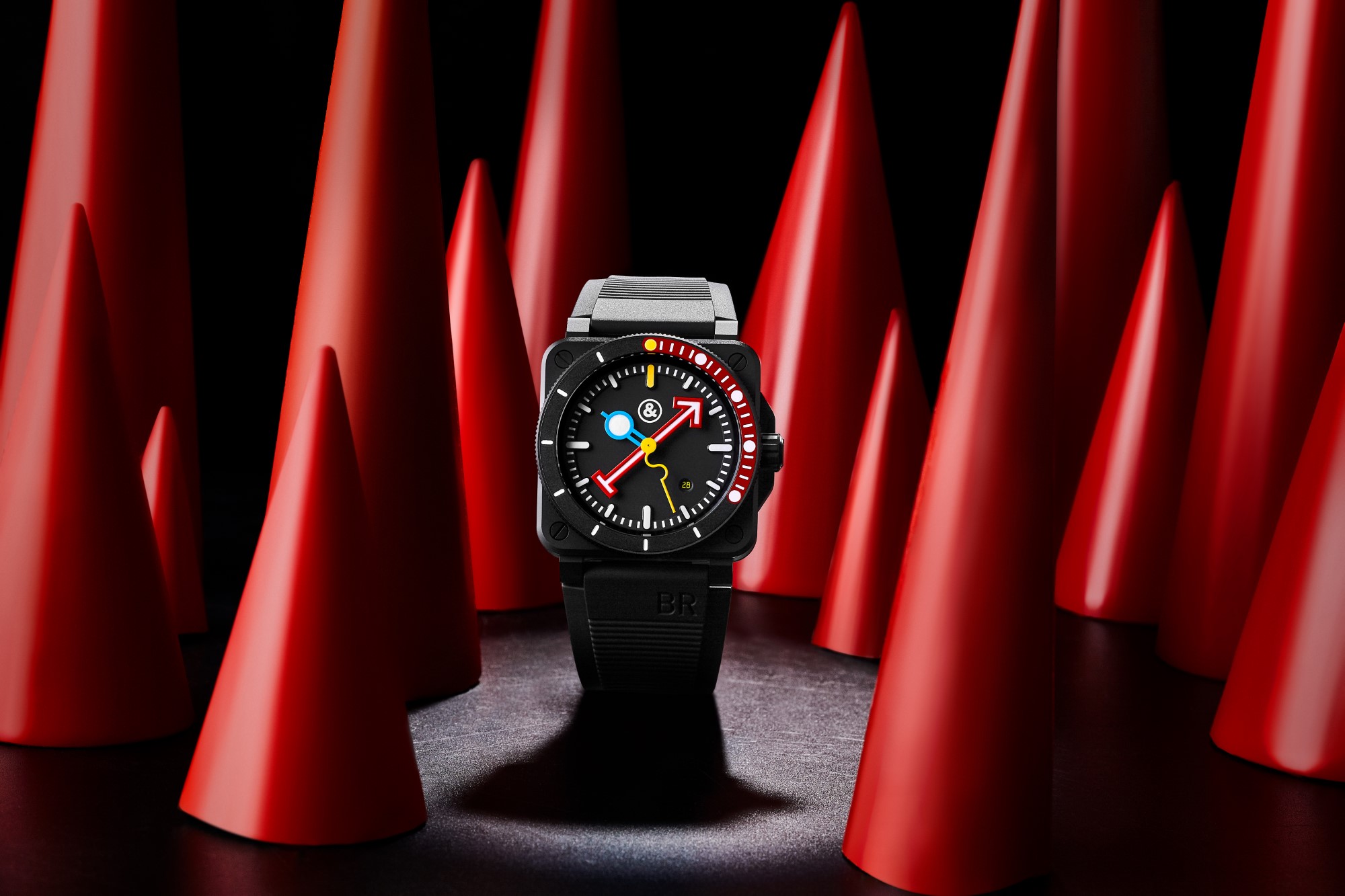 Last year, horological raconteur and founder of Revolution magazine, Wei Koh, launched a project called Grail Watch. The idea was for Koh to work with his favorite brands and designers to create unique, limited-run watches. Not a unique idea, but one that was met with a substantial amount of excitement, seeing as it came from such an eccentric personality in the community. The first release brought together designer of wacky things Alain Silberstein and Belgian brand Ressence. This was followed by 30th-anniversary chronographs with Franck Muller that pushed the usually zany brand back to its more traditional roots. Finally, in December, Grail Watch debuted its third collaboration of the year, the Trilobe Une Folle Soirée “Wild Night,” Wei Koh’s spin on the brand’s Une Folle Journée. It seems Wei Koh is brimming with ideas, because he’s back with Grail Watch 4, which again enlists Alain Silberstein, this time in partnership with Bell & Ross for the Bell & Ross x Alain Silberstein Black Ceramic Trilogy: the 3-hand Klub 22, the diver Marine 22, and the chronograph Krono 22. 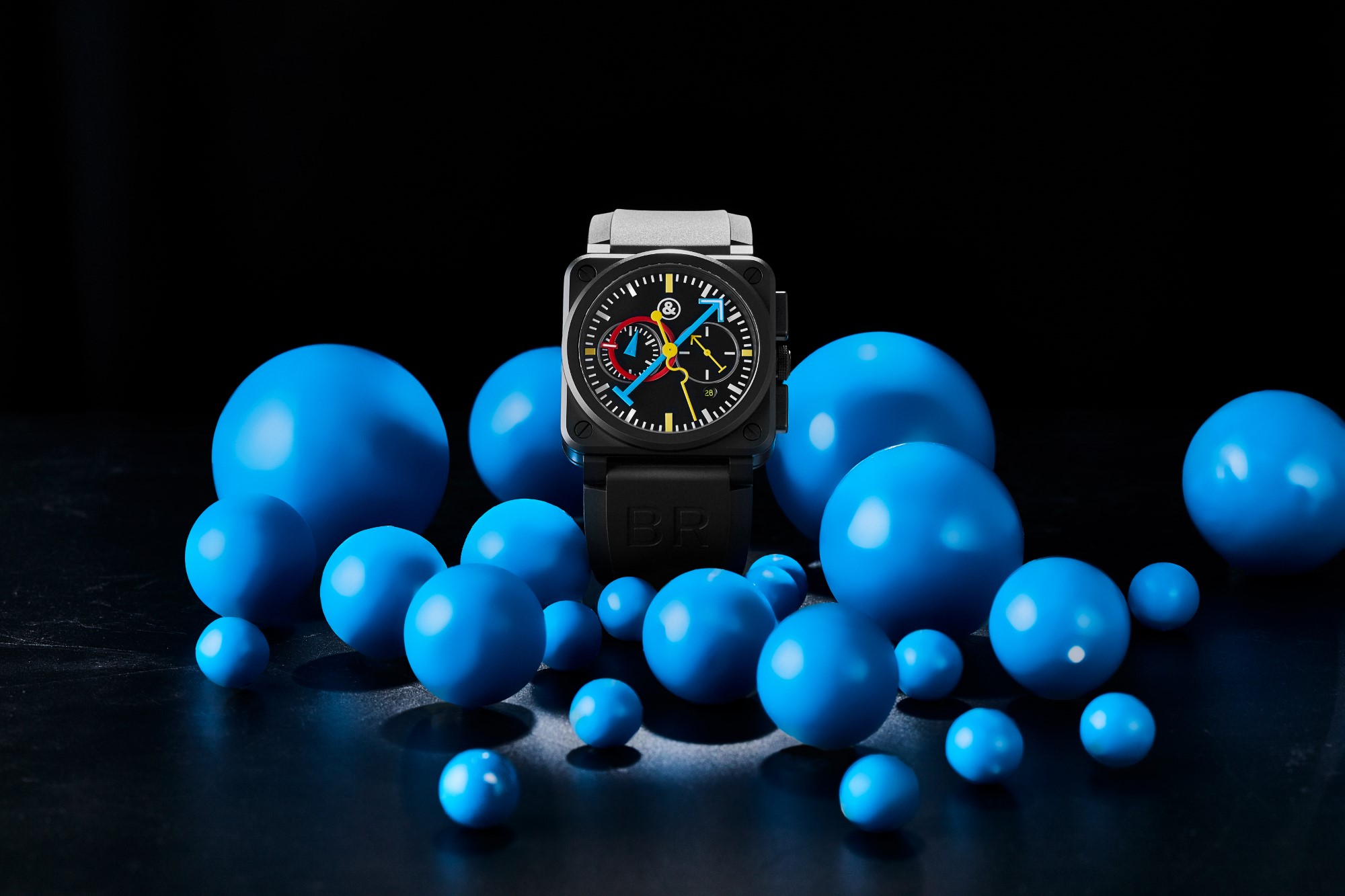 Anyone even passingly familiar with Alain Silberstein will know him for his collaborations with Louis Erard, a partnership that has yielded no fewer than eight models. Bell & Ross is no stranger to the occasional collaboration, but typically, these yield watches that are within the brand’s design comfort zone, such as its work with the F1 teams of Renault and Alpine and the French aerobatic flight team, the Patrouille de France. As yet, the brand’s idea of a wild night out has been limited to red radar-inspired watches and the BR 03-94 Multimeter (plus a few skulls here and there). So, bringing in Silberstein was sure to stir things up a bit. Fans will certainly recognize Silberstein’s tricolor palette and whimsical handset in this new collection, which brings an injection of fun to the BR 03 models. 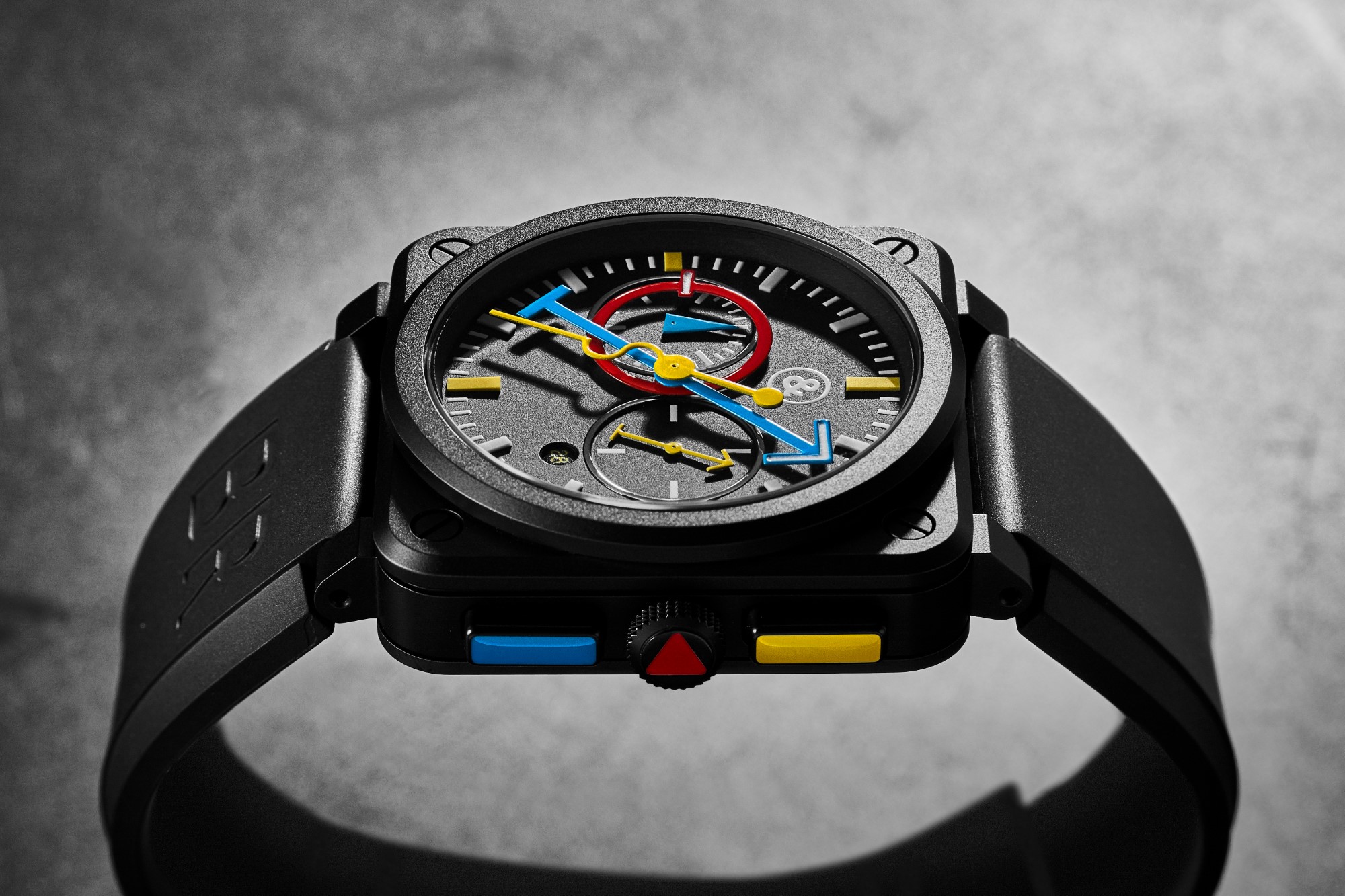 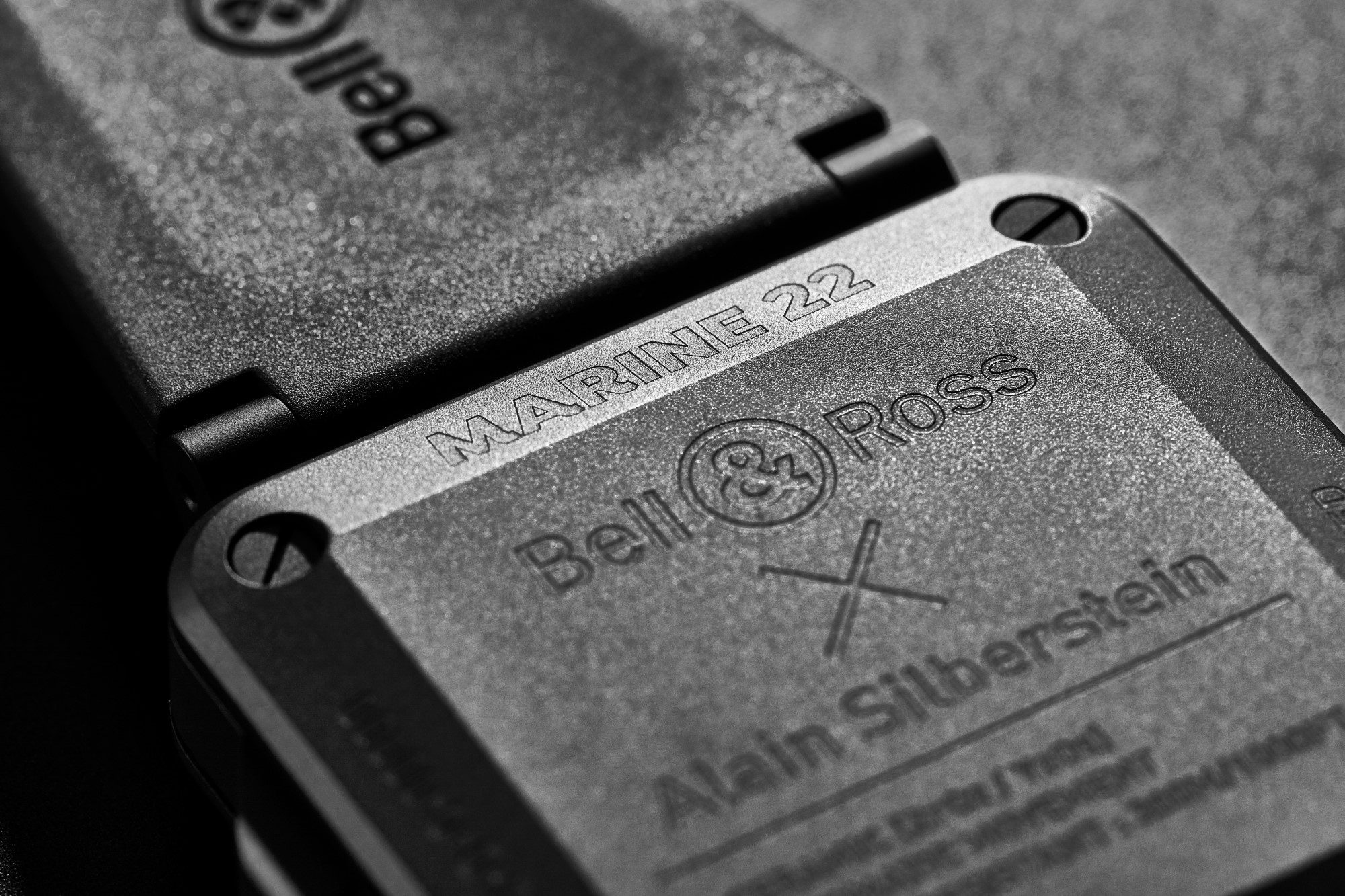 While it used to use black PVD, Bell & Ross has used solid ceramic for its black-cased watches since at least 2015. That’s what you’ll get with the entire Black Ceramic Trilogy, with a square 42mm case in matte black ceramic. The case has varying thicknesses: 10.4mm for the Klub, 12.05mm for the Marine, and 12.8mm for the Krono. Like a Royal Oak, it’s held together with bolts that align symmetrically on the front and are fastened with screws on the back. The stock strap is black rubber debossed with the B&R logo, and in my experience, is quite comfortable; the short, rounded-off triangular lugs are drilled, allowing for quick changes if you happen to have ultra-wide straps. The Klub and Krono both feature 100m of water resistance, while the Marine boasts a substantial 300m. On the Marine, too, you’ll get a ceramic bezel with the first 20 minutes in red and a yellow pip, while the Krono is made unique with its colorful pushers and crown. One of the standout features of the BR 03 collection, for me, has always been how the strap slims down the silhouette of the watch; along with the rounded corners and edges, it makes for a watch that looks great and wears well, and there’s no reason to think the Grail Watch models will be any different. 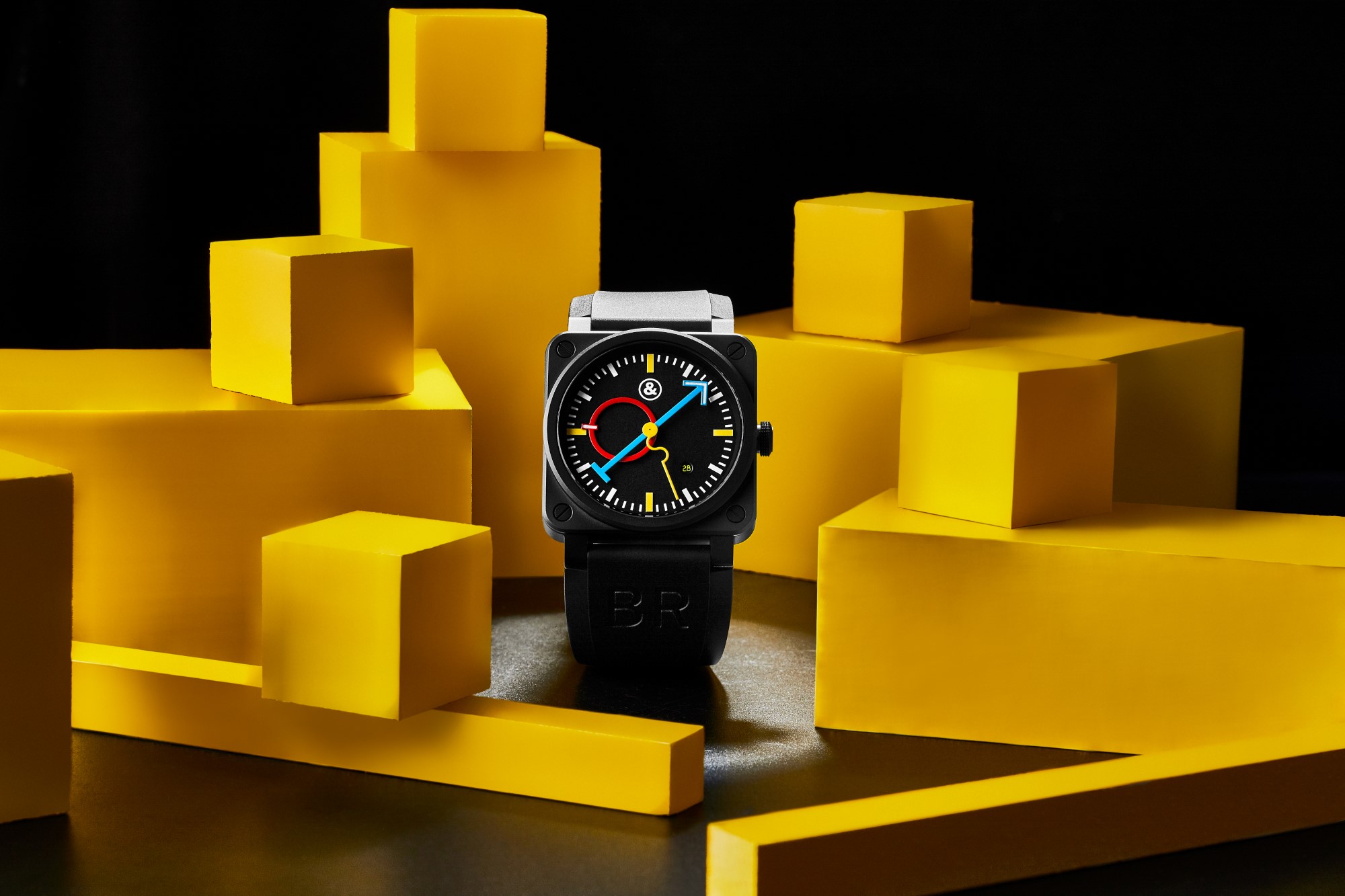 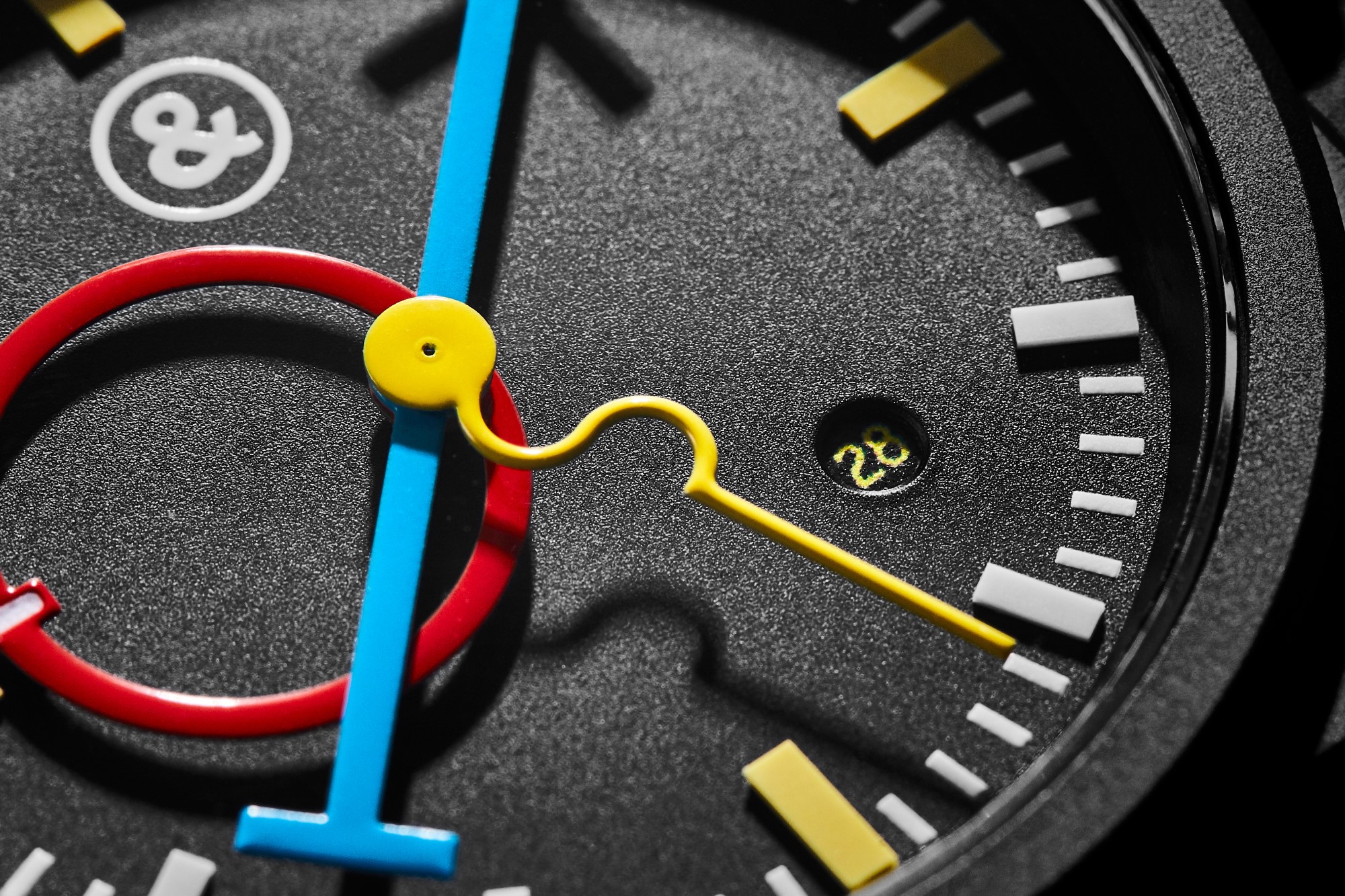 The dials are where you’ll get your biggest fix of fun and variety. Common amongst the three is a matte-black finish to match the case, a highly legible hour/minute track, a small 4:30 date with a black wheel and yellow font, and a minimalist B&R logo at 12 o’clock from which the text has been removed. The Marine 22 stands out the most, though. Unlike the other two, its minute/hour ring is raised and applied to the main dial, with rounded instead of blocky markers; only the 12 o’clock marker is colored yellow instead of all four cardinal markers, and it’s fully lumed. The handset, too, is the most distinct. While the Klub and the Krono use Silberstein’s trademark long arrow minute and silly straw seconds (chrono seconds for the Krono), along with a circle hand for the hours, the Marine beefs up the minutes arrow to allow it to be filled with lume and swaps the circle hour hand for a similarly lumed jumbo lollipop. (Note that the seconds hand is not lumed, so this is not technically a dive watch, a designation which requires a running seconds indicator visible in darkness). On the Klub and the Krono, the minute and hour hands both receive a dash of lume, and the minute/hour tracks are fully lumed. The Krono, of course, features two subdials for running seconds and 30-minute chronograph counter. For my part, the floating date has always been a weak point on B&R dials, and while the yellow font makes it a bit more fun, on the Klub and Marine it is really in the middle of the dial with nowhere to go. Worse, on the Krono the date is right up against the subdial and just off-center, which would annoy the hell out of me every time I saw it. 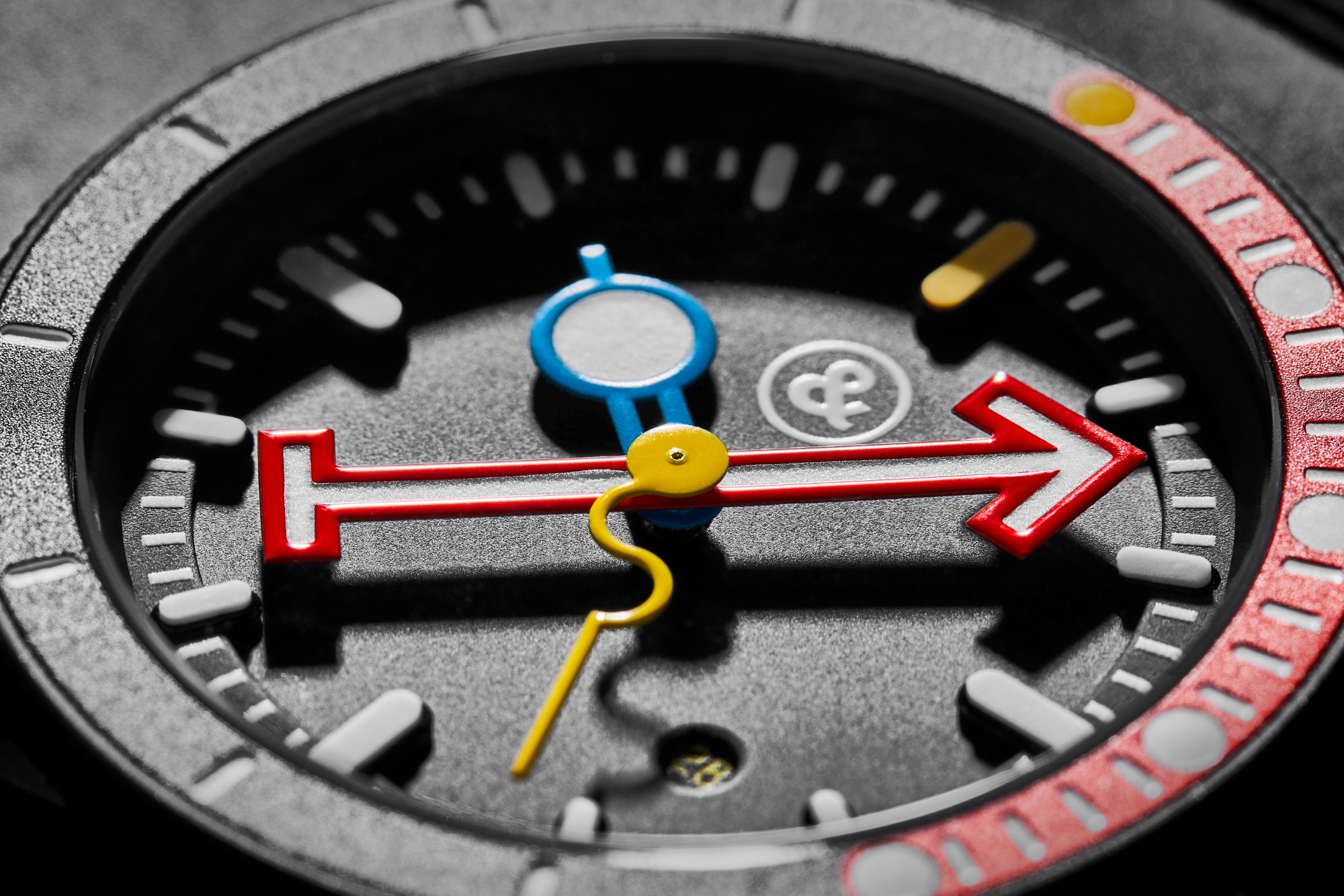 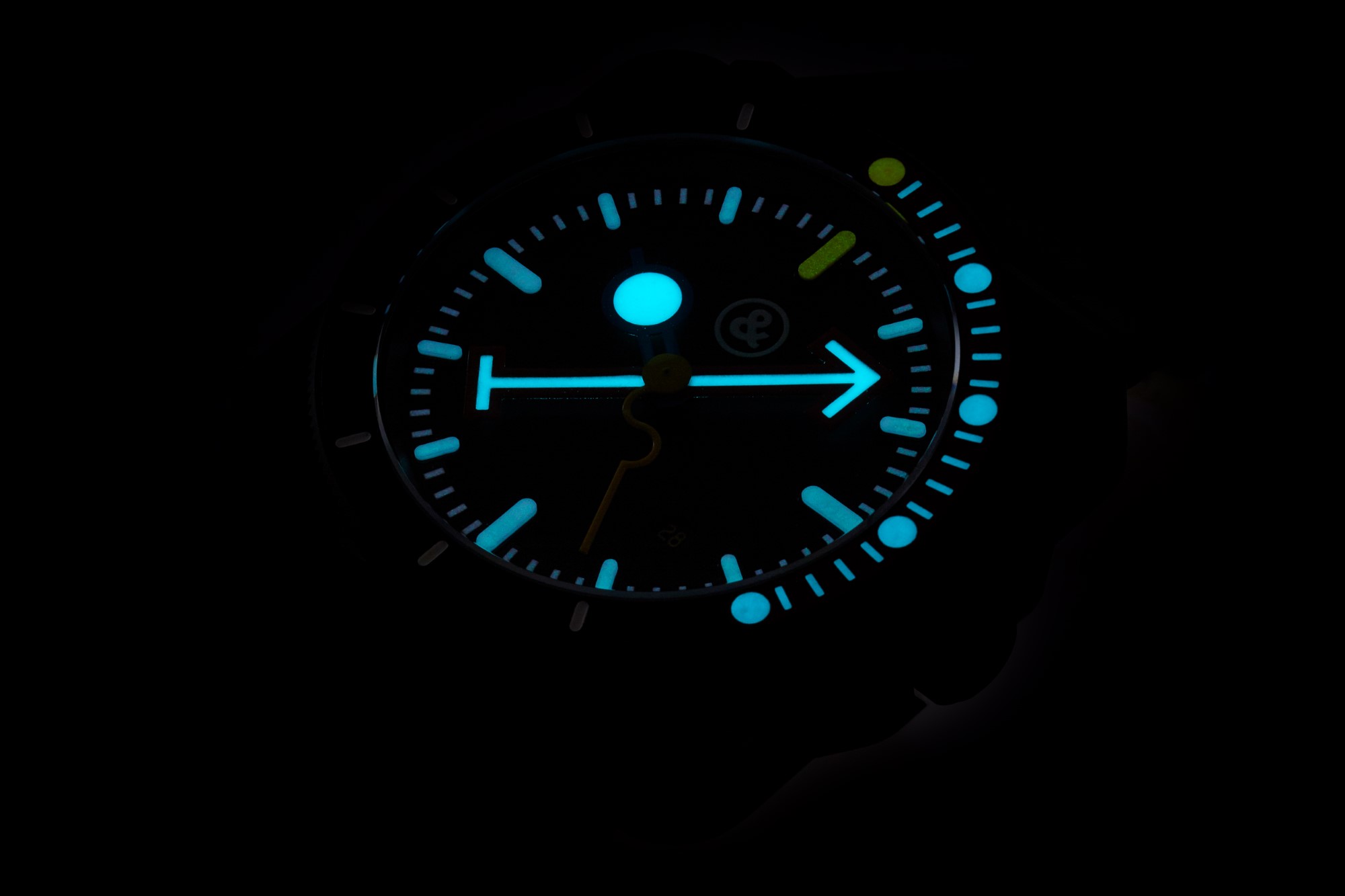 The Black Ceramic Trilogy is powered by two of Bell & Ross’ automatic calibers, the BR.CAL-302 for the Klub and the Marine and the BR.CAL-301 for the Krono. The former is based on the Sellita SW300, while the latter (to the best of our knowledge) is based on the ETA 2894-2 modular chronograph (If that is the case, it’s rather curious that the brand is still split between the two, while many other similarly positioned brands rely on a single supplier). In any case, the movements all have more than proven themselves in a number of exceptional watches, with 42-hour power reserves beating at 28,800 vph. The watches all have solid ceramic casebacks with text reflecting the collaboration, each model’s name, and limited-edition numbering. 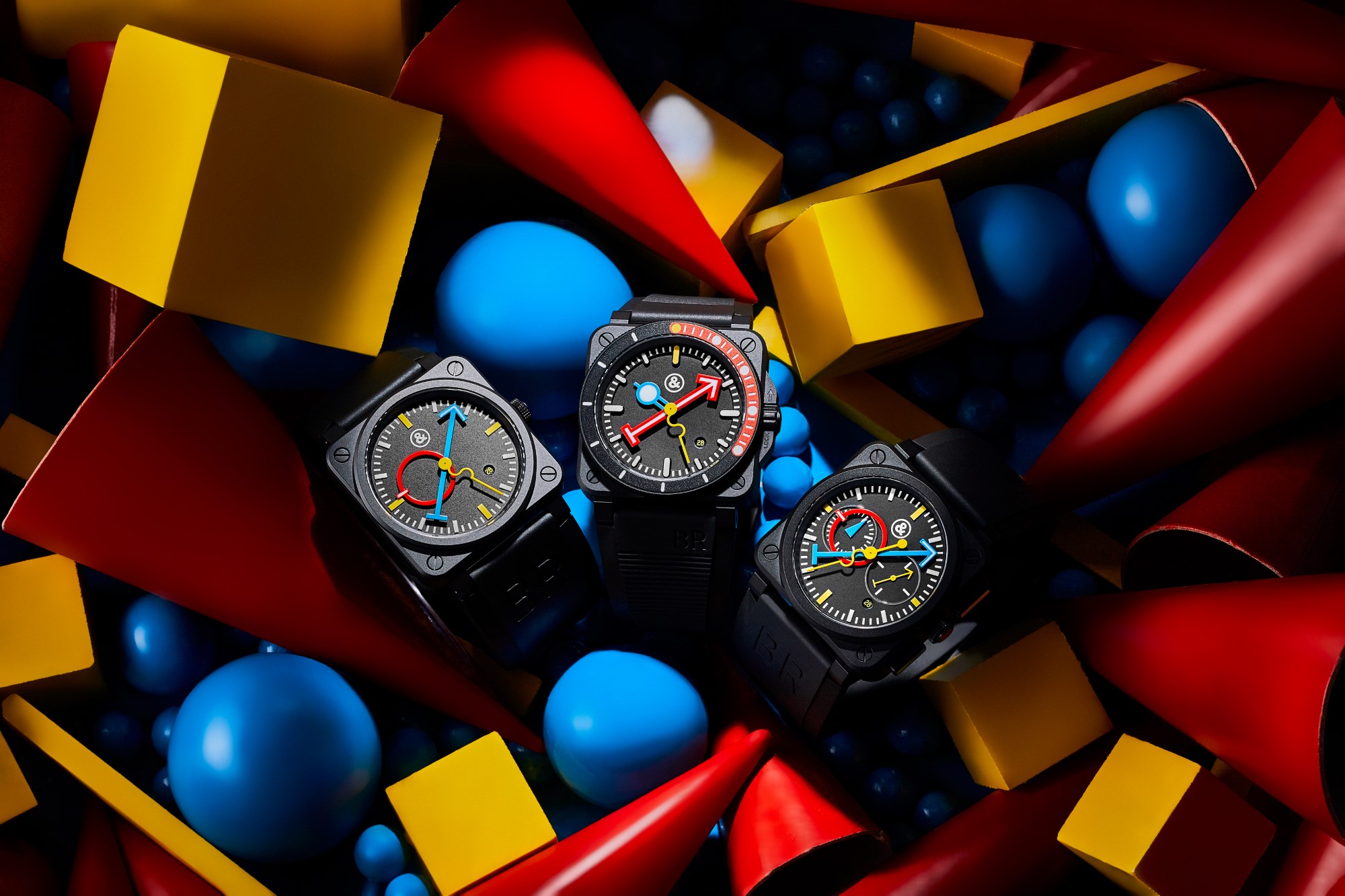 If you’re struggling with this collab, maybe this will help understand: Imagine you set up a friend who can best be described as “tacticool” with another friend who is “kindergarten-teacher quirky.” They hit it off and the next thing you know, they’re married with three kids who seem to have gotten all the good parts from each parent and none of the bad. In this beautifully enlightening example, you are Grail Watch, your tacticool friend is Bell & Ross, and your kindergarten-teacher quirky friend is Alain Silberstein. The three beautiful children are the Black Ceramic Trilogy (although, and I cannot stress this enough, the children do not appreciate being called that). This release is a success story of unexpected partnerships, plain and simple. Even if it’s not for everyone, I imagine people who have been longing for a Bell & Ross with a bit of whimsy will be delighted. The Grail Watch 4: Bell & Ross x Alain Silberstein Black Ceramic Trilogy is limited to 100 pieces for the Marine 22 and the Krono 22 and 200 pieces for the Klub 22, available exclusively from Grail Watch on January 9, 2023. The first 50 of each will be allotted to box sets priced at$16,700. The remaining fifty of each model will be available for individual purchase, with the Klub 22 priced at $4,400, the Marine 22 priced at $5,600, and the Krono 22 priced at $6,700. For more information, please visit the Grail Watch website.