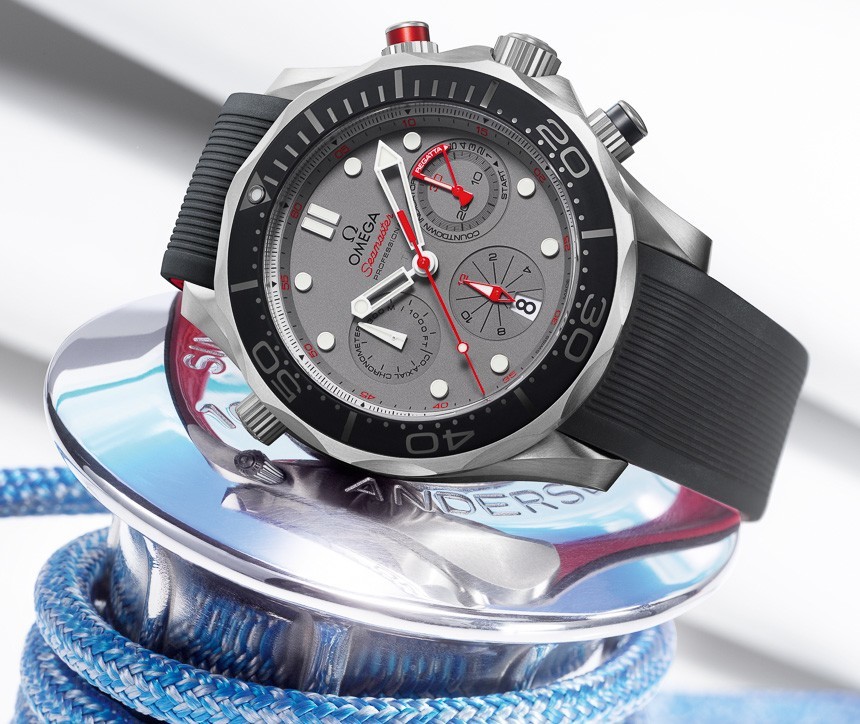 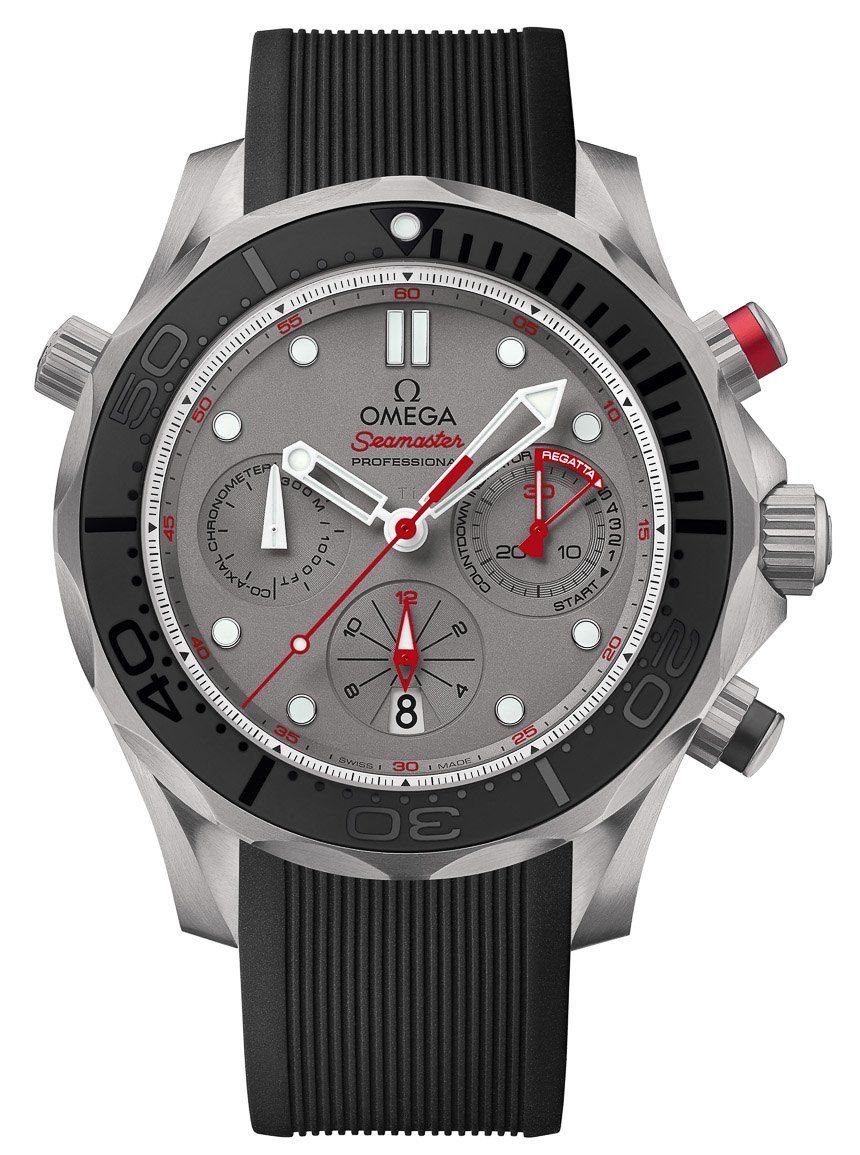 For 2015, Omega releases a new version of their Seamaster Diver 300M Co-Axial Chronograph with another model in celebration of their sponsorship of the America’s Cup ETNZ team (Emirates Team New Zealand). A revised version of an existing model, this Omega Seamaster Diver 300M Co-Axial Chronograph ETNZ has a refreshed dial that is a bit more “nautical,” a titanium case, and a new rubber strap which has black on the outside and red on the inside. All the black/gray tones along with red are in honor of the ETNZ racing yacht colors.

In 2013, aBlogtoWatch joined Omega in San Francisco to hear more about their partnership with ETNZ in anticipation of that year’s America’s Cup, where I went hands-on with that year’s Seamaster Diver 300M ETNZ Limited Edition watch (which I really liked). Actually, it does not appear as though this 2015 Omega Seamaster Diver 300M Co-Axial Chronograph ETNZ watch is a limited edition – even though it is technically a continuation of the earlier model series. 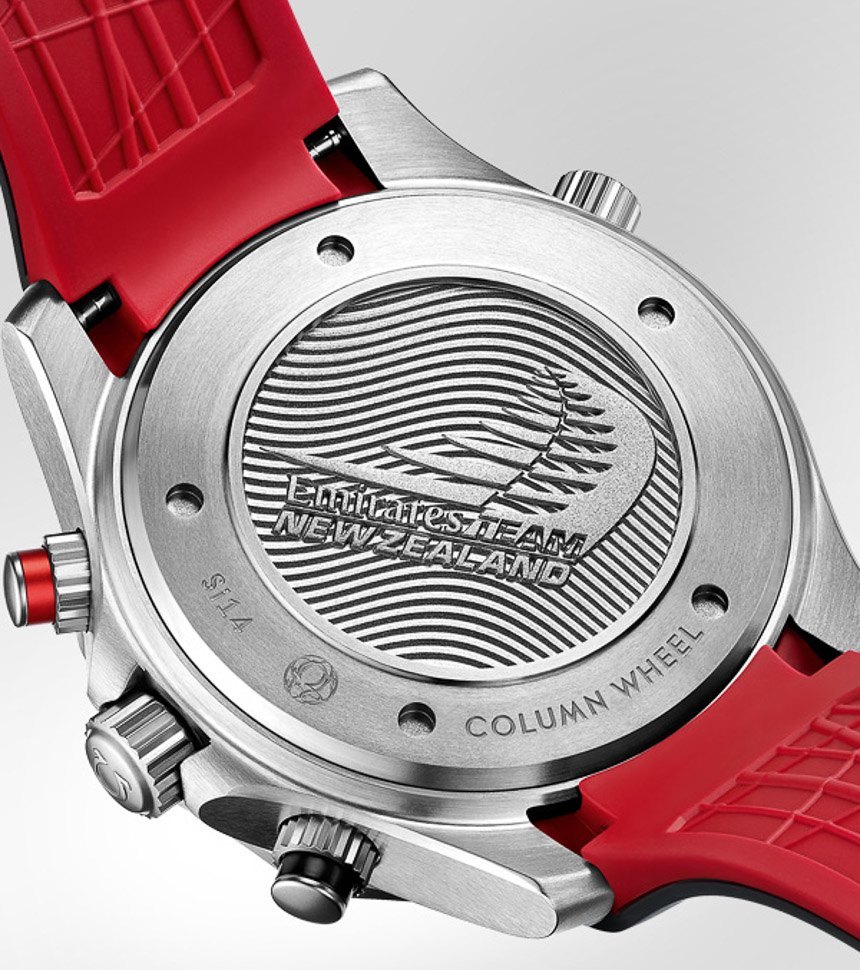 While I love Omega’s dive watches, the Seamaster collection is admittedly a bit crowded, so getting the naming conventions correct is an art. As you likely know, the Seamaster 300M family is totally different than the Omega Seamaster 300 watch family. What a difference an “M” makes… Omega also sometimes throws in “Diver” to the name – you know, just to keep things interesting. In any event, the appeal of the various Omega Seamaster watches is very different whether you are looking at a 300M or a Planet Ocean.

This Omega Seamaster Diver 300M Co-Axial Chronograph ETNZ comes in a 44mm-wide grade 5 titanium case (I am not totally sure if this is the first, but I don’t recall previous cases like this in titanium – at least not grade 5). In addition to the titanium case, the dial of this specific Seamaster ETNZ watch is in grade 5 titanium which is sandblasted, making for a very legible outcome. While we don’t right now have pictures of the actual watch, we did see it hands-on with Omega at Baselworld 2015, so we can attest to the fact that the dial looks very nice. 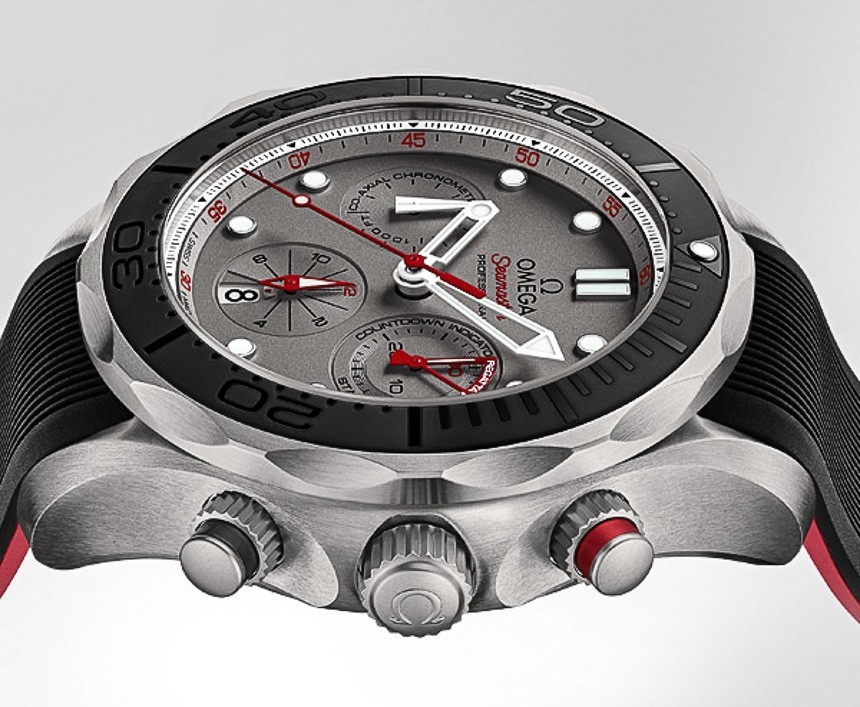 Speaking of the dial, you can see that Omega wanted to push the envelope, making its professional dive watch series look a bit more like a yacht racing regatta timer. While the chronograph still operates normally, there is a special (and quite ingenious) “regatta-style” hand on the chronograph minutes counter that runs over an outer track to allow for the 5-minute countdown before the start, as well as a compass-style design to the chronograph’s 12-hour counter. With a focus on functionality, we applaud that even the subdial hands are applied with luminant.

The rotating diver-style bezel has a matte black ceramic insert, and you’ll notice the “two-tone” colors for the chronograph pushers which are again meant to evoke the colors of Emirates Team New Zealand. Only the rear of the Omega Seamaster Diver 300M Co-Axial Chronograph ETNZ watch will, however, say anything about the partnership, where an ETNZ logo will be engraved. 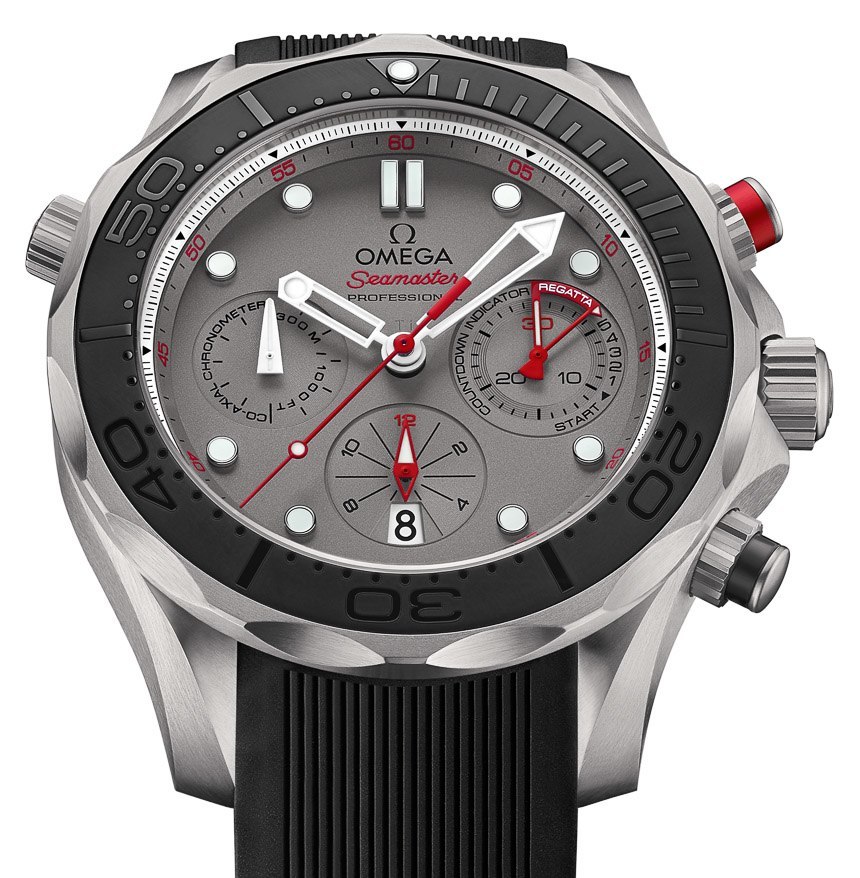 Water resistant to 300 meters, the Omega Seamaster Diver 300M also has a manual helium release valve crown on the left-side of the case which is still there these days, mostly for style and fun, since an extremely small number of people actually use this feature. We nevertheless love the Seamaster Diver 300M watches for their durable construction and tool-watch performance, but also their sporty fun looks which include a lot of color. Omega further offers a new type of rubber strap, produced in a high-grade material that is made with a textured black strip on the top and a red strip on the bottom.

Inside the Omega Seamaster Diver 300M Co-Axial Chronograph ETNZ is the Omega caliber 3300, which is a great mid-range luxury movement featuring some in-house made elements, so it includes some parts in silicon as well as a co-axial escapement and a column wheel for the chronograph. The automatic movement is also used in other popular Omega watches such as the still new Speedmaster Mark II. This reference 212.92.44.50.99.001 Omega Seamaster Diver 300M Co-Axial Chronograph ETNZ watch is not part of a limited edition and is a priced at $7,800. It should be available now. omegawatches.com