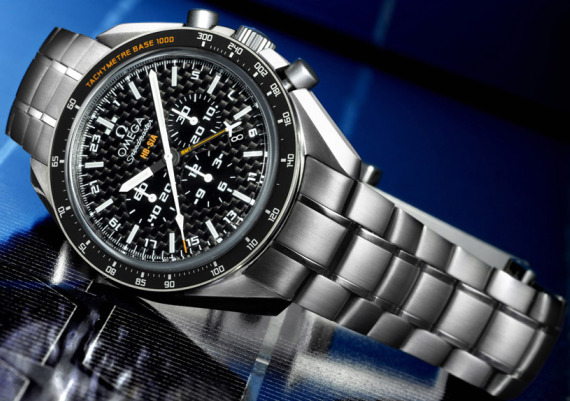 This is a watch that I could really see myself wanting – even though it has a carbon fiber dial that I tend to not always enjoy (though I did like it on my Tissot T-Touch Expert). Yes, this has been a month of many Omega watches, but they have had some interesting releases so they merit the attention. This is probably my favorite. I’ve often looked at the classic Omega Speedmaster Professional Moon Watch and thought, “yes it is cool, but I’d really like a modern version.” Yes, it is true that my sentiment defeats the point of the “Moon Watch heritage,” but I didn’t really want to have a manually wound watch with a Hesalite (plastic) crystal to deal with. My collection might very well include a Moon Watch in the future, but it would be for historic kicks, not cause I’d want to wear it each day. Omega has released a ton of Speedmaster watches over the years with sapphire crystals and automatic movements, but this new Solar Impulse watch just really catches my eye.

Let’s get the whole Solar Impulse HB-SIA part of the name out of the way. It refers to a plane currently finishing development that has been partially sponsored by Omega. The plane is pretty cool because it is totally solar powered. It is more than a mere glider too. It has two electric prop engines that only produce about 10hp. The engines are powered by lithium ion batteries that are charged by the many solar panels all over the plane’s surfaces (mostly the wing). The plane can even store enough juice to run at night. The idea is to have a plane that can fly all day and all night (based on power collected during the day from the solar panels and stored in the batteries). To recognize the Solar Impulse HB-SIA plane, the Omega watch is named after it. I mentioned this before and am going to reiterate my feeling about this, but the reason that Omega named the watch after the plane is for branding purposes. There are so many Speedmaster watches, it was a good idea to associate something with the watch for naming purposes. This way you have a cool name to call the special Omega Speedmaster watch aside from “Reference: 321.90.44.52.01.001.” 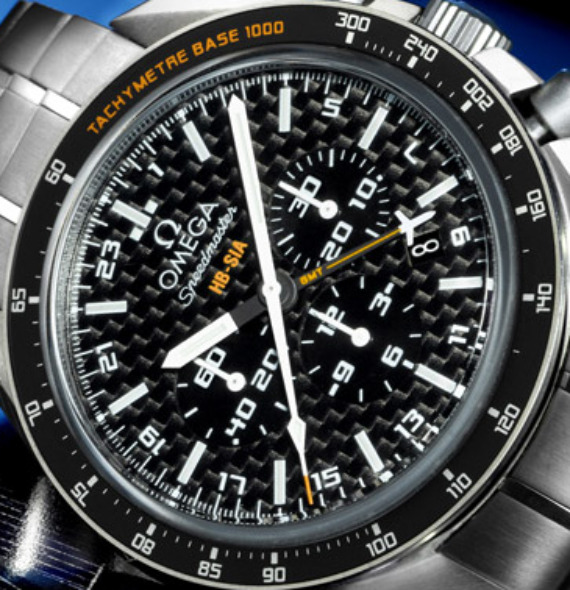 To my knowledge, this is the first Omega Speedmaster watch to be made from titanium. Other than the X-33, Omega has used titanium in some Seamaster watches, but not much else. It seems to be the haute metal for many watch makers these days. Both the case and bracelet are titanium in this case. A light and hard metal, but more prone to scratches that steel. The watch is also a bit larger than the classic Speedmaster. The Solar Impulse is 44.25mm wide. The watch is also water resistant to 100 meters. The dial of the watch is made of carbon fiber – also very unusual for Omega, but it looks to be done in a subtle enough manner. So that is good.

The dial is similar to the classic Speedmaster layout. The font of the numerals is “futurized” a bit, and the result is nice. Makes it feel more at home in modern aircraft. In addition to updated look and carbon fiber dial, the watch also features a date (on a black date disc) as well as a 24 hour GMT hand that is independently adjustable. I really like how the GMT hand is done. Omega makes it easy not to confuse the hand by labeling it as such. It might sound silly, but I like how the GMT hand looks – a good concept. There is also the orange color trim on the dial and tachymetre scale that adds a little reminder that this is not your average garden variety Omega Speedmaster watch. The sapphire crystal is AR coated on both sides.

The movement is the Omega Caliber 3603, that has a nice list of qualities. It is an automatic, of course has Omega’s Co-Axial escapement, and also has a column wheel based chronograph complication. Like I said before, there is also the date and the independently adjustable GMT hand. The movement is also a COSC certified Chronometer with 55 hours of power reserve. All these qualities together make for a very nice Omega that should really get you excited whether you are a Speedmaster fan or an idle viewer of Omega watches. Price retails for $5,600.