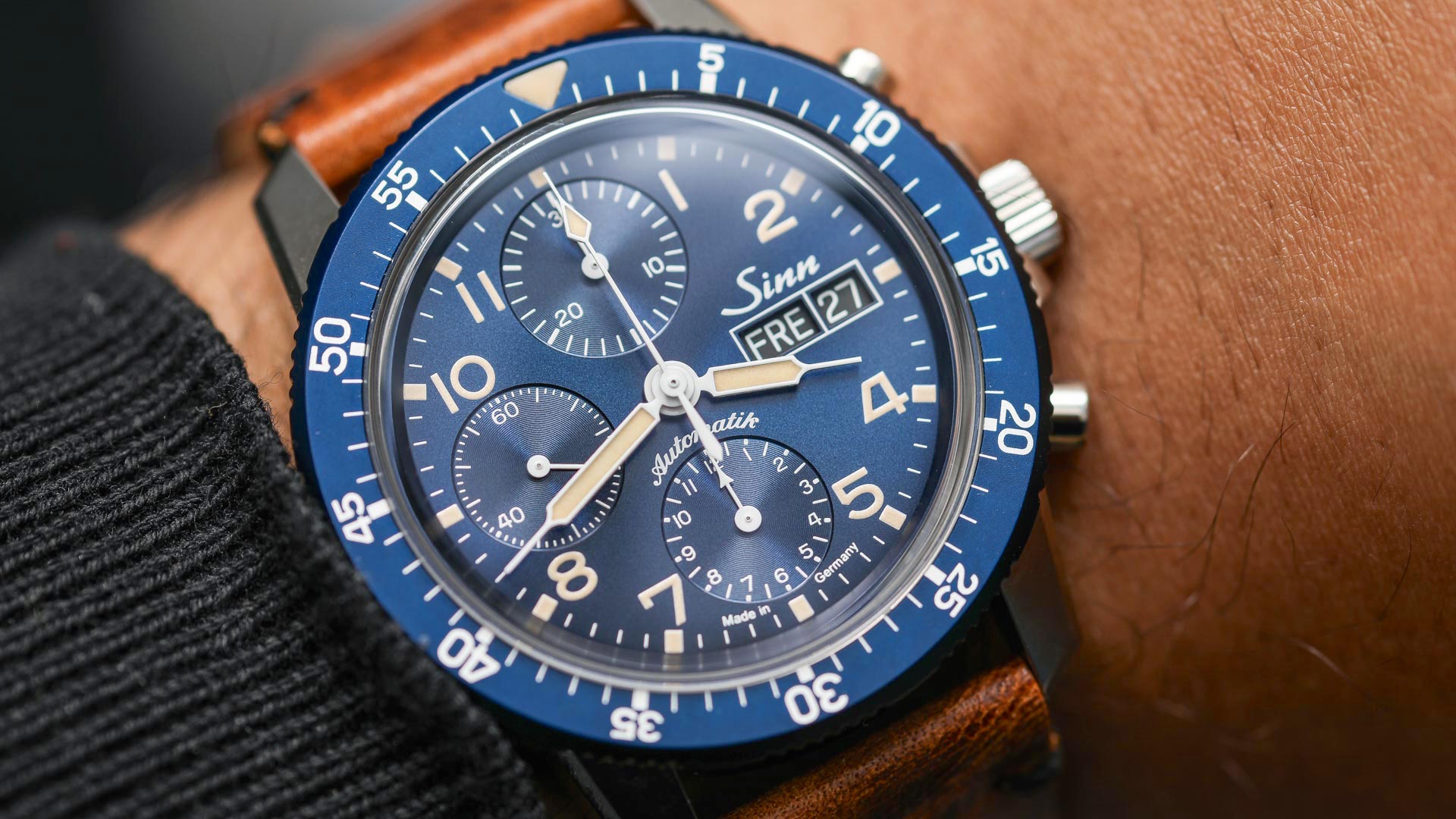 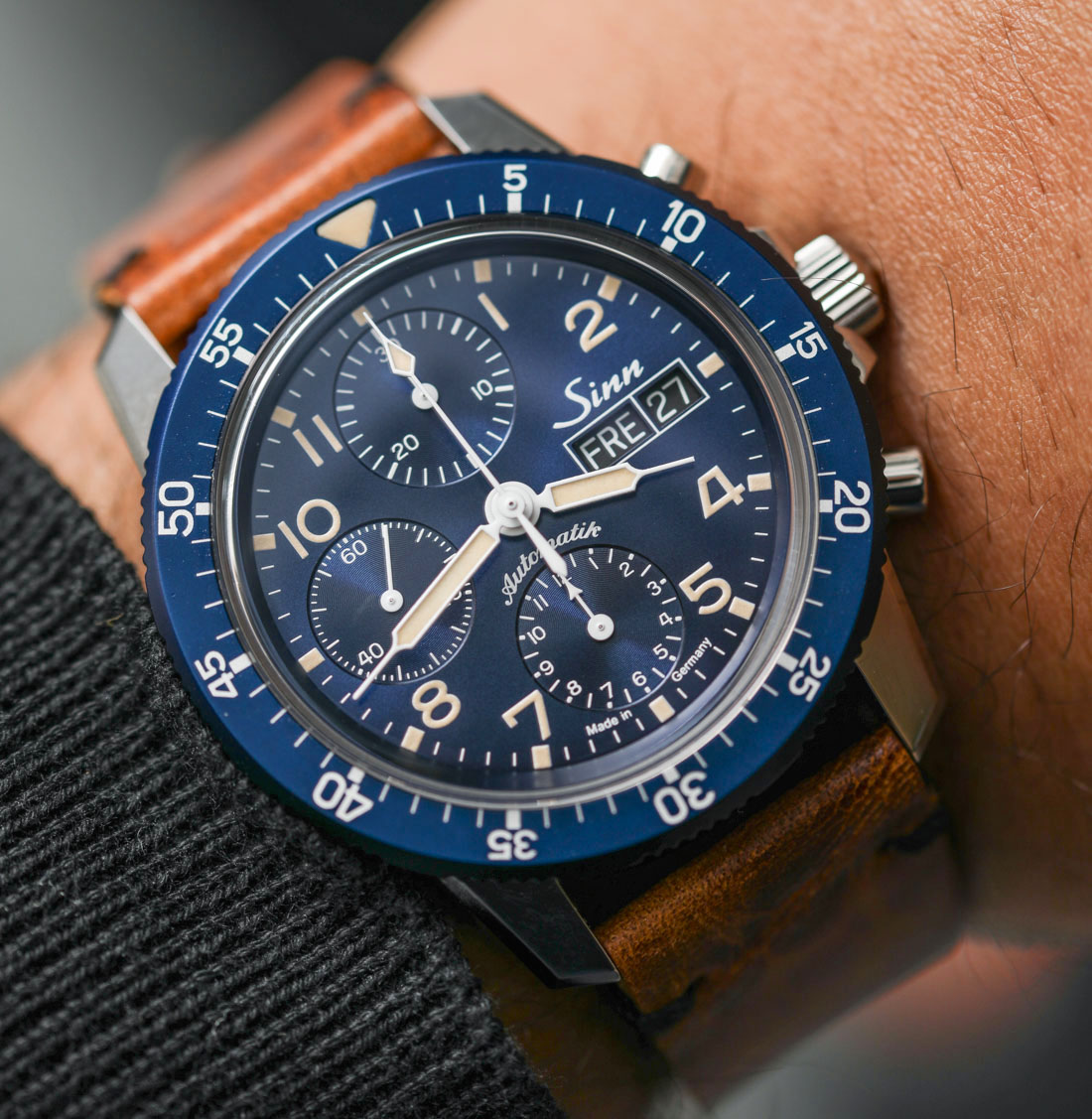 In recent years, the idea of the archetypal “tool watch” is something that has become so diluted and abused that it’s difficult to keep up with what it actually means. Many brands love tip-toeing around these designs, but a great deal of them just don’t get it right. In my mind, Sinn has never had to worry about this and as they remain steadfast in their mission to produce professional timekeeping instruments, they continue to build upon a growing lineage of timepieces that nail the tool watch concept in the truest definition of the term. It’s just, their thing… and as long as they stick to it, I find it very difficult to discover issues with the watches they create. This year at Baselworld, the brand announced the limited edition Sinn 103 Sa B E Pilot Chronograph, a sleek, professional aviator’s watch that demonstrates Sinn’s ability to create watches that are both exceedingly practical and visually stimulating. 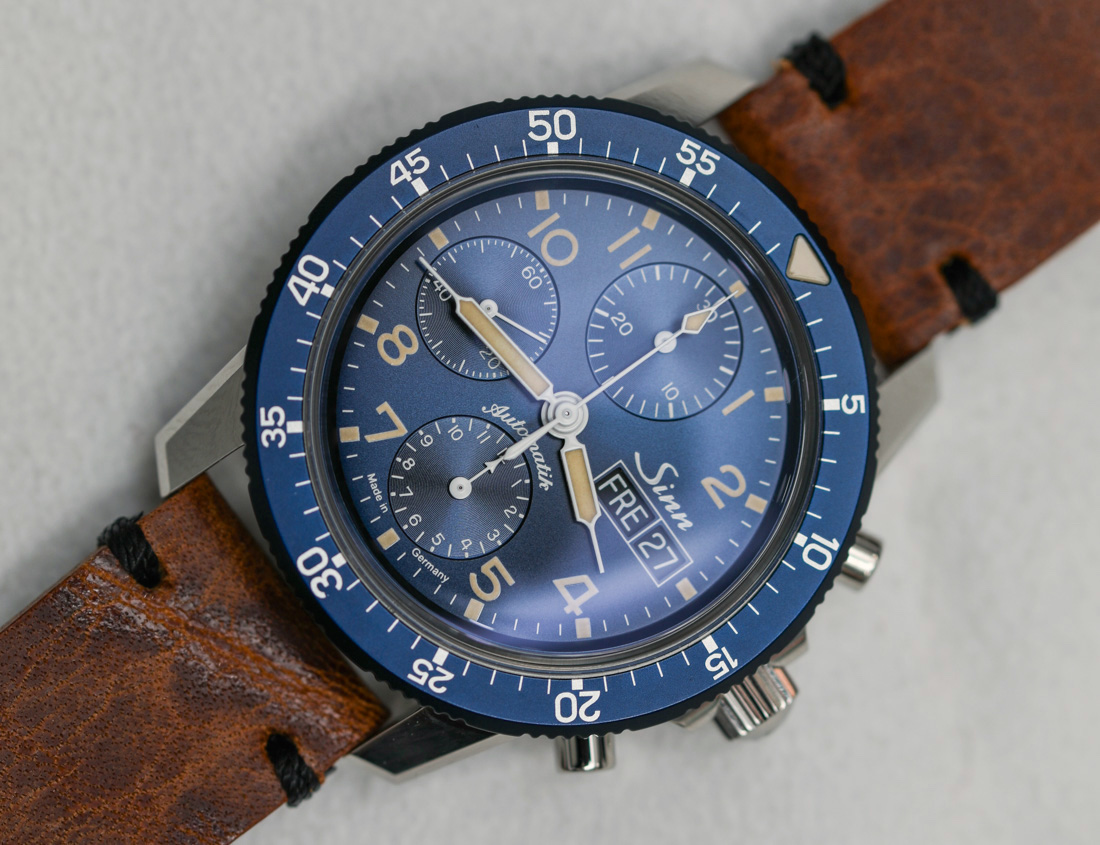 While Sinn has a rich history of developing a range of watches suited for a number of professional applications, the 103 family of pilot chronographs is what always pops into my mind when I think about the brand. Typically monochromatic in its execution, the 103 provides its wearer with a pared-down time display that delivers high legibility without frivolous design touches or… pieces of flair. But, I find it especially exciting whenever the brand steps out of the usual routine and starts experimenting with a splash of color – as is evidenced by watches like the Sinn 103 A Sa B or the Sinn 240 St Gz I wrote about last year. This is essentially what we find in the Sinn 103 Sa B E Pilot Chronograph and I’m happy to report that the color translates very well within their established pilot chronograph platform. 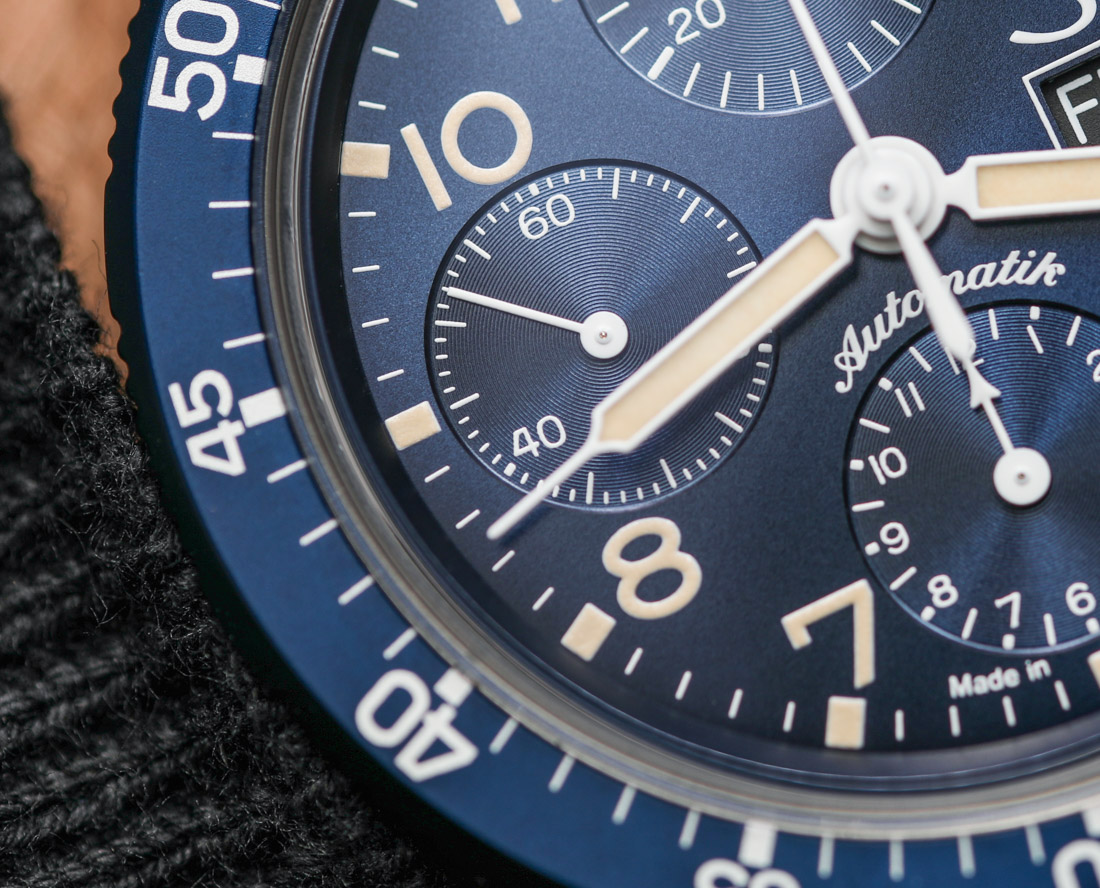 Like your average Sinn 103 St, the 103 Sa B E Pilot Chronograph wears tall at around 17mm including the proud bubble sapphire crystal. If you’ve ever worn one of these, it’s actually quite a surprise to witness how tall it wears since the watch measures 41mm in diameter and 47mm from lug to lug. But, this is a pilot’s watch after all and this kind of bold wrist presence is actually something I’ve grown to appreciate when it comes to these Sinn pilot chronos. In the case of this watch, the effect is further enhanced by the reactive sunburst blue dial and anodized blue bezel, which stand as the most distinguishing traits here. Everything else you’d expect from the “tool watch” camp is still here and the watch delivers 200m of water resistance even without screw-down pushers. 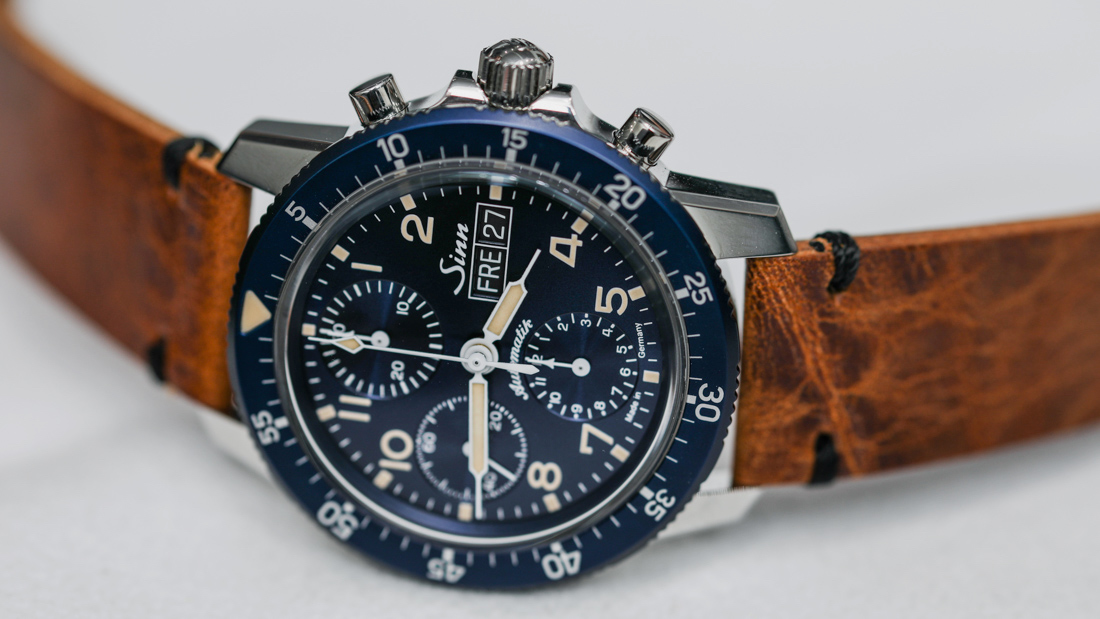 The dial on the Sinn 103 Sa B E Pilot Chronograph is also familiar with its basic Valjoux 7750 layout featuring big syringe hands and matching sub-dials at 12, 6, and 9. This is also where we’ll find the most divisive aspect of the watch; the ivory-colored Super-LumiNova. Now, I’m not usually against the idea of “faux vintage” lume, but I do find it odd that the color tone wasn’t utilized within the entire track of the elapsed time bezel, especially since it was used for the 12 o’clock pip. Nevertheless, everything we love about 7750-based pilot watches can be found here and the Sinn 103 Sa B E still proves itself as a tool watch even with its dressed up sunburst blue getup. 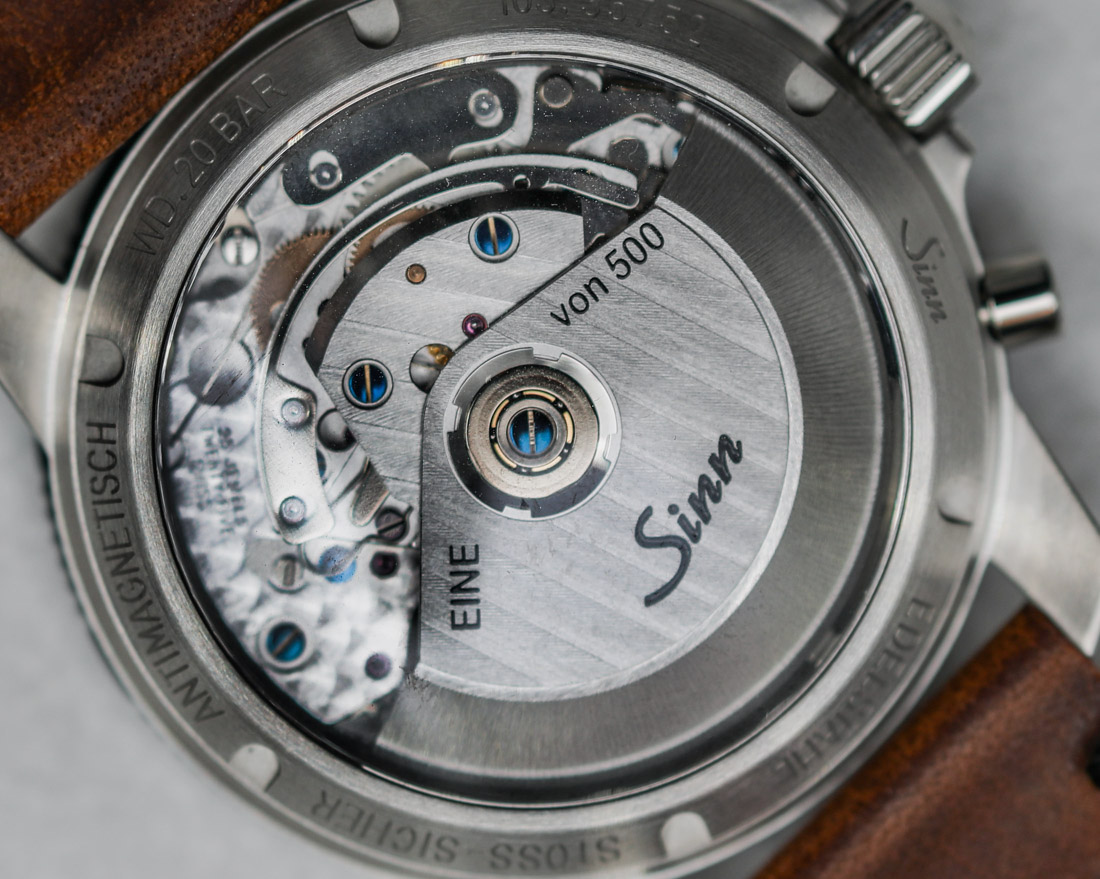 Speaking of the movement, the Valjoux 7750 in the Sinn 103 Sa B E Pilot Chronograph is about as basic and reliable as it can be. Decoration isn’t even extensive, even though Sinn opted for the sapphire display caseback pictured above. For a while now, I’ve actually felt that the Valjoux 7750 is pretty much like the Honda Civic of the automatic Swiss chronograph world and in many cases, I’d prefer it over some fancy in-house caliber. Accessibility and serviceability are key, and the utilitarian nature of the movement makes it both practically and thematically appropriate for the Sinn 103 Sa B E Pilot Chronograph. Power reserve is 42 hours and the chronograph itself is smooth during actuation. The movement also supports a nice day-date display at 3 o’clock that matches nicely with the dial’s sunburst tones. 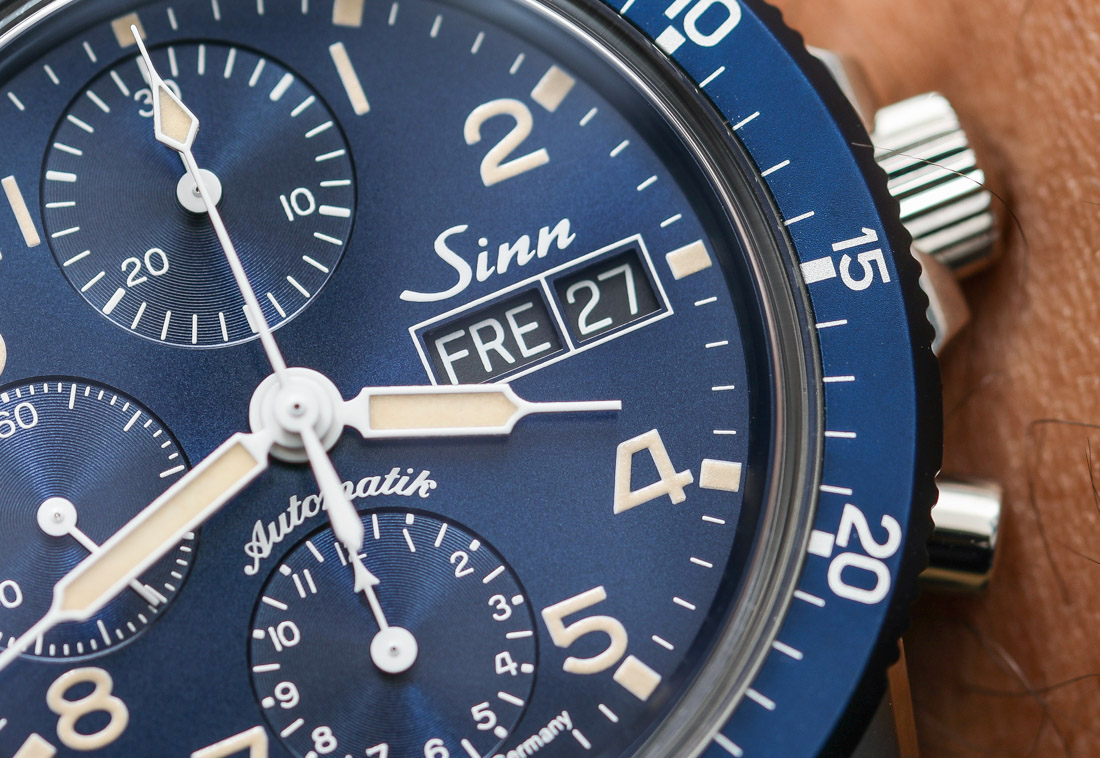 If there’s one aspect of the watch I’d have to complain about, it’s the integration of a regular elapsed time bezel in lieu of the more traditional “mission timer” countdown bezel. I might be missing something but to me it’s just a functional redundancy when you have a chronograph. But then again, I can see where it would be useful for tracking two simultaneous events at once. Also, when it comes to options Sinn gives you the choice of purchasing the Sinn 103 Sa B E Pilot Chronograph with either a Steel H-Link bracelet or a leather strap with tang buckle. Personally, I’d take the bracelet. But with a 20mm lug width this watch is sure to be a blast on a variety of different leather and nylon straps. 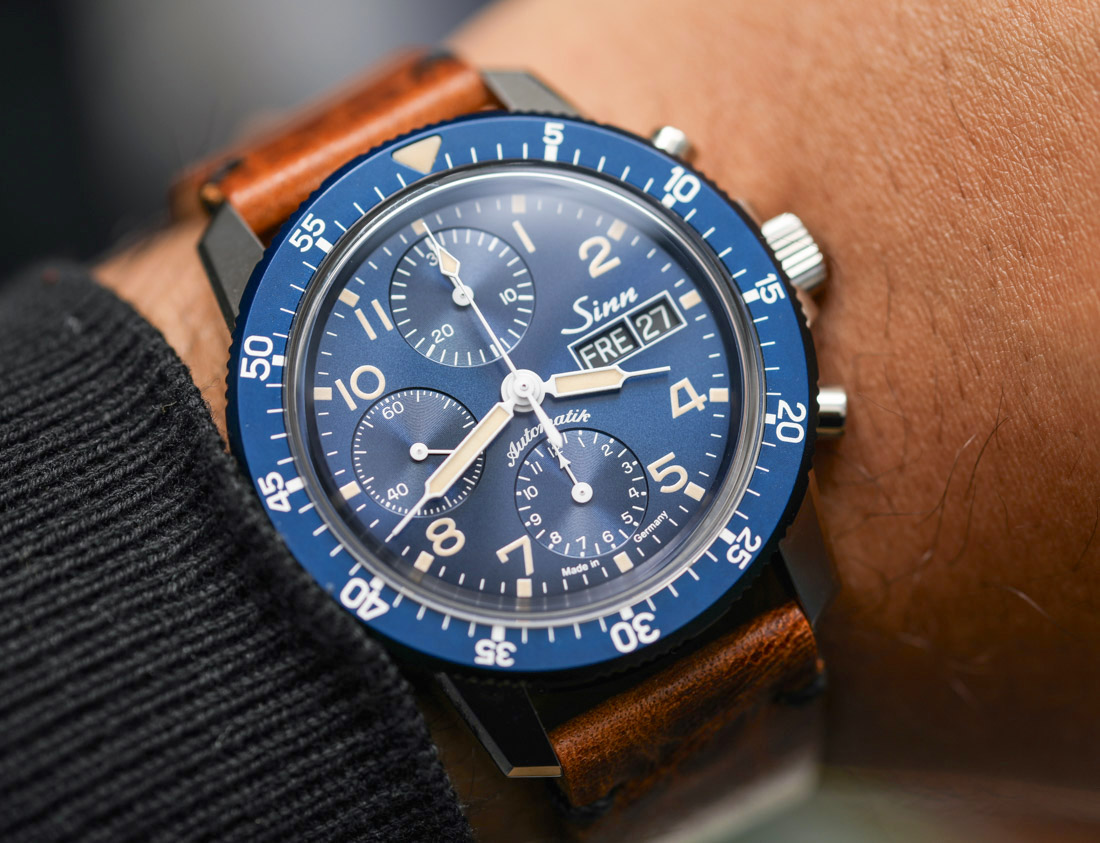 Overall, it’s interesting to note that there isn’t actually a practical reason for this watch to exist. We didn’t ask for another all-blue Sinn Pilot chronograph but something about the way this one was executed just makes me wonder why I didn’t think of it before. The vibrant color scheme demonstrates just how capable Sinn is when it comes to breaking their usual routine and offering something with a little more personality. Price for the Sinn 103 Sa B E Pilot Chronograph is $2,760 on the strap and $2,950 on bracelet. It’s limited to a total of 500 pieces. sinn.de