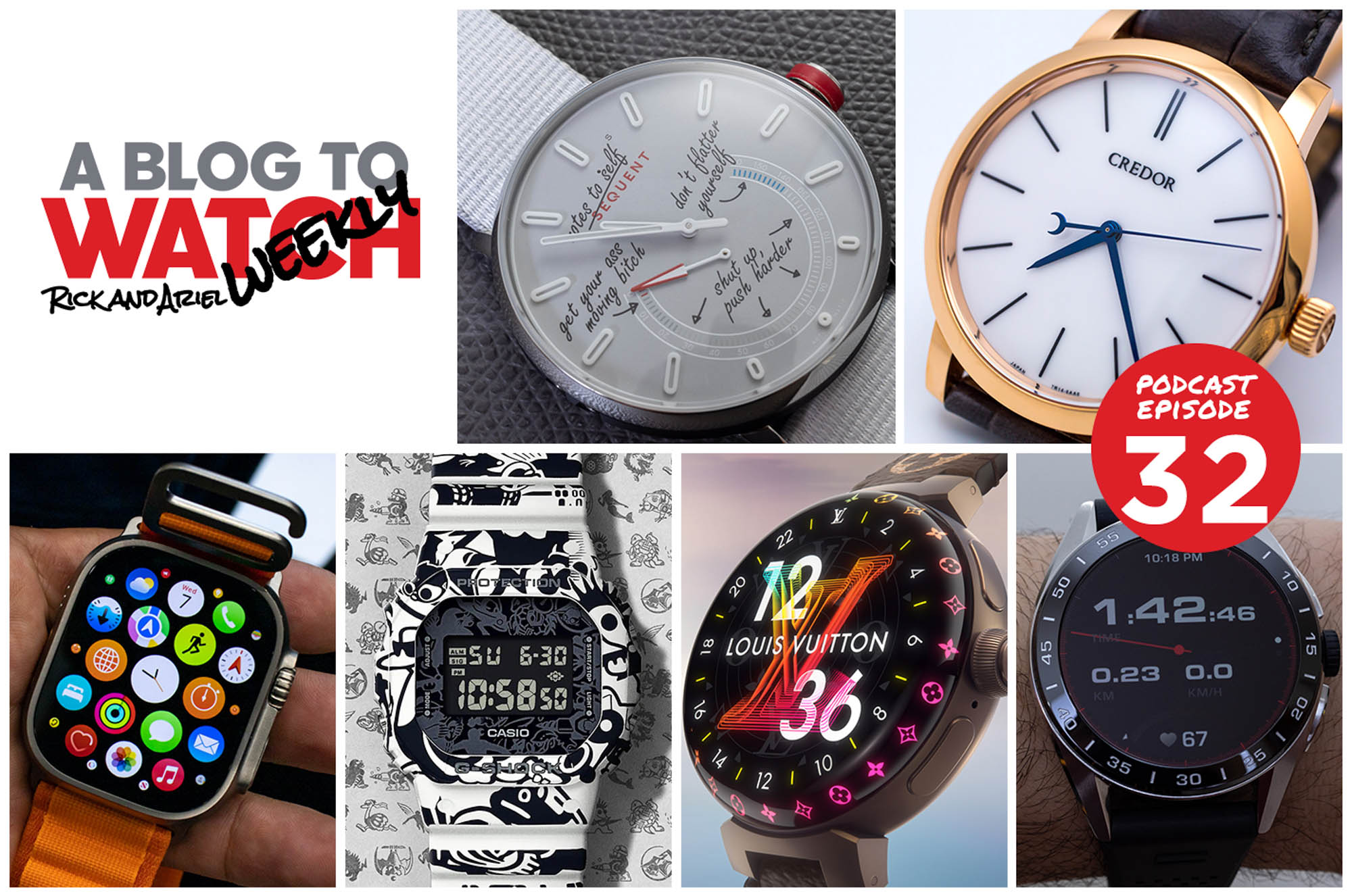 The Apple Watch Ultra, New Smartwatches From Tag Heuer, Louis Vuitton, And Sequent, Plus A Look At The Credor Eichi II And Why G-Shock Won’t Make A Smartwatch

In this episode of aBlogtoWatch Weekly, Ariel, Rick, and David are joined by Andrew from Watchfinder & Co. for a deep dive into the world of smartwatches. Given the recent release of a new generation of Apple Watches and the massive amount of attention that the Apple Watch Ultra has received from traditional collectors and enthusiasts, our hosts kick off the show by answering the question of whether or not the Apple Watch should even be considered a watch in the first place. From there, the conversation gets into why the new adventure-ready Apple Watch Ultra appeals to many individuals who historically had no interest in traditional smartwatches, along with whether or not its design was influenced by the traditional Swiss timepiece industry. Given its more durable construction and ability to even function as a proper dive computer, our hosts bring up the point as to why many people tend to inherently trust Apple over many traditional watch manufacturers when it comes to things like depth ratings, along with how Apple is able to excel at creating intuitive and easily digestible interfaces.

Although the new generation of Apple Watches is arguably the biggest news from the world of connected devices, it is hardly the only option available within the space, and our quartet of hosts then get into a conversation about some of the other premium smartwatches that are currently available, such as those produced by Tag Heuer and Louis Vuitton. After discussing why these models fill different roles within the greater connected watch landscape, Ariel then offers some insight on why Casio has decided not to pursue smartwatches, despite its G-Shock range being regarded as the go-to digital timepiece for rugged use. After pondering the question of whether or not any wearable connected device will be able to dethrone the Apple Watch at some point in the near future, our hosts move to the complete opposite end of the timepiece spectrum to talk about the ultra-premium Credor Eichi II and its different approach to luxury, before moving back to the topic of connected devices with the unconventional and irreverent Sequent Smart(ass) Watch that was created in collaboration with seconde/seconde/. To wrap up the show, our hosts look at some of the various shortcomings of smartwatches and discuss details of why connected devices such as the Apple Watch aren’t currently entirely solar powered, along with when we might be able to see brands produce models that are able to charge themselves autonomously.

Each week, the editors of the timepiece enthusiast publication aBlogtoWatch.com come together to discuss some of the latest new releases and hottest industry stories for the aBlogtoWatch Weekly news podcast program. Listeners can learn more by clicking on any link below to view the articles discussed by the aBlogtoWatch crew in the program.

This episode features Ariel, Rick, and David, plus Andrew from Watchfinder & Co.

aBlogtoWatch launched the first-ever podcast about watches back in 2010 and continues to be the most referenced and respected publication for watch enthusiasts, buyers, and collectors in the world. Today, in addition to the website and social media channels, aBlogtoWatch produces the SUPERLATIVE podcast interview program as well as aBlogtoWatch Weekly.

We’d love to hear from you with feedback or suggestions for future show topics or guests. Advertising opportunities are also available. Comment below or contact [email protected].