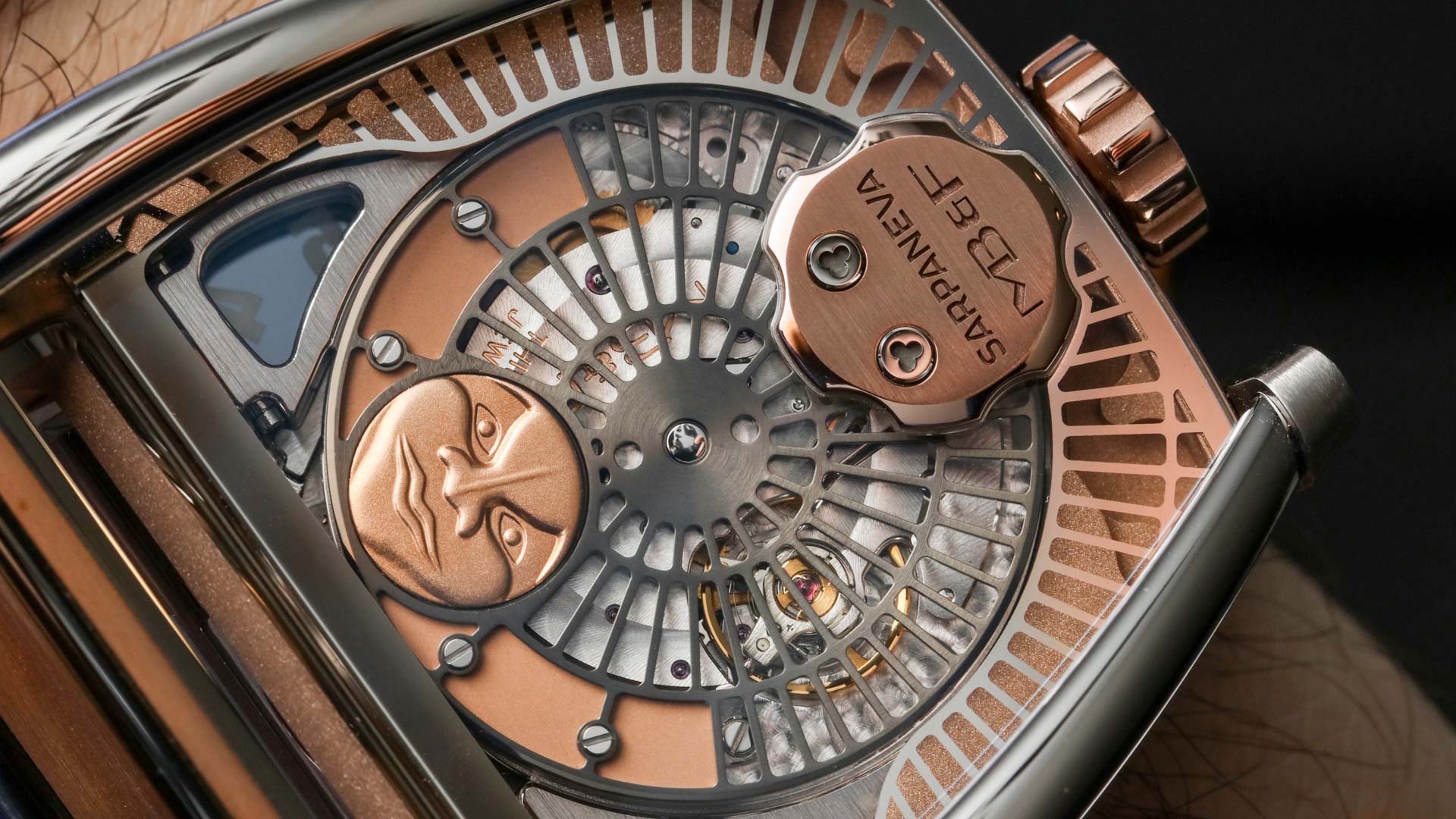 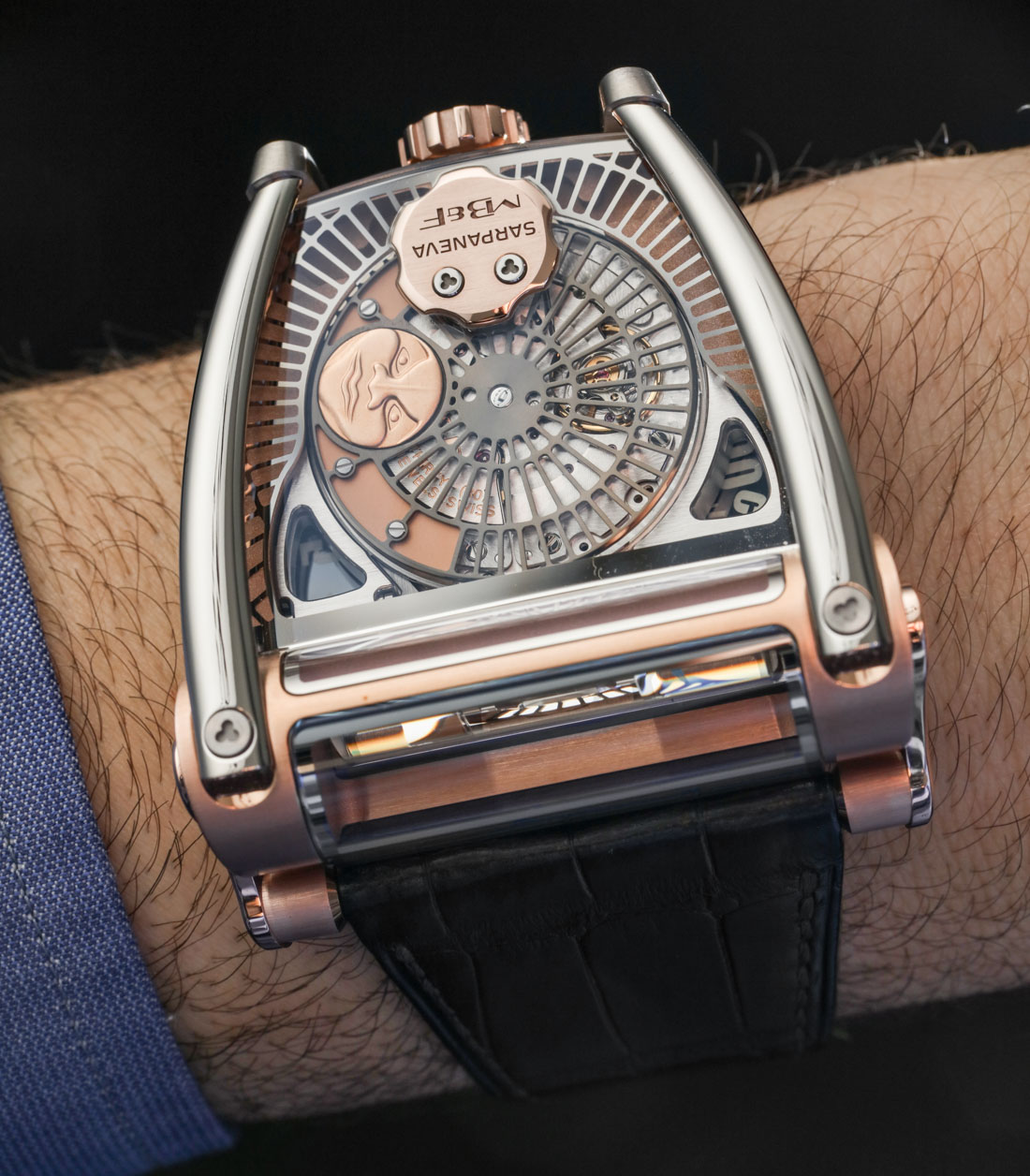 In 2012, MB&F and Stepan Sarpaneva collaborated on the MB&F MoonMachine. Based on the earlier HM3 Frog watch, the first MoonMachine replaced the HM3’s signature winding rotor with Sarpaneva’s iconic moon phase display. It was and still is one of the top watches for lovers of the moon phase complication to own. Unfortunately, only 36 pieces were made and not every collector could have one. Luckily, however, Max Büsser and Stepan Sarpaneva have teamed up again to produce a sequel. Let’s take a closer look at the new MB&F MoonMachine 2. 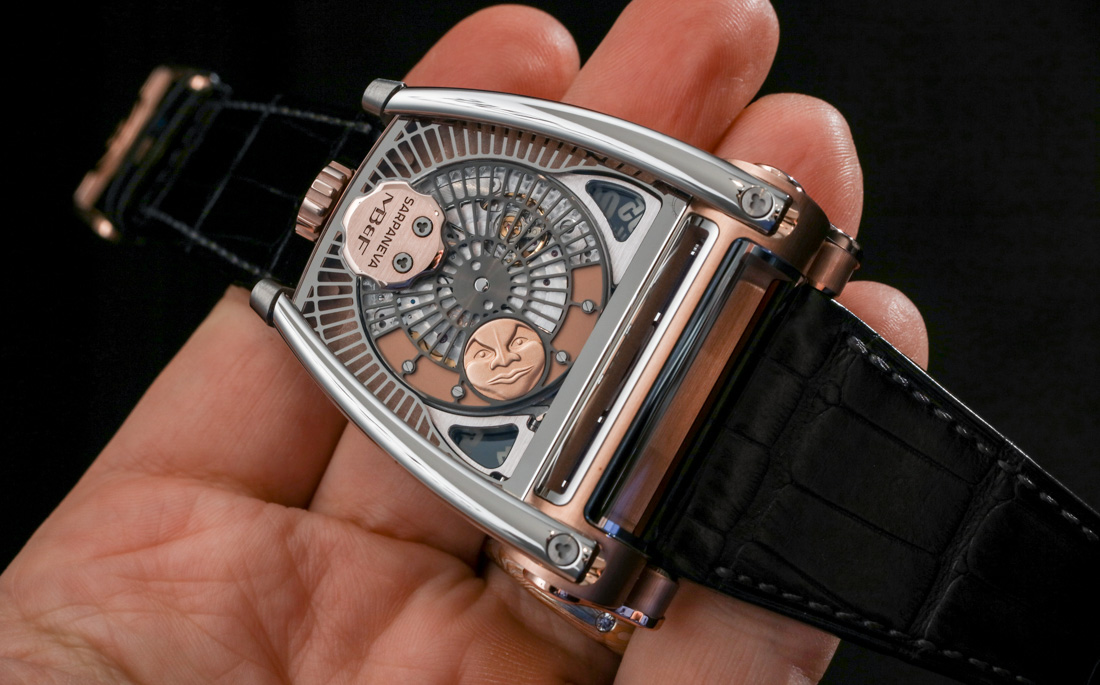 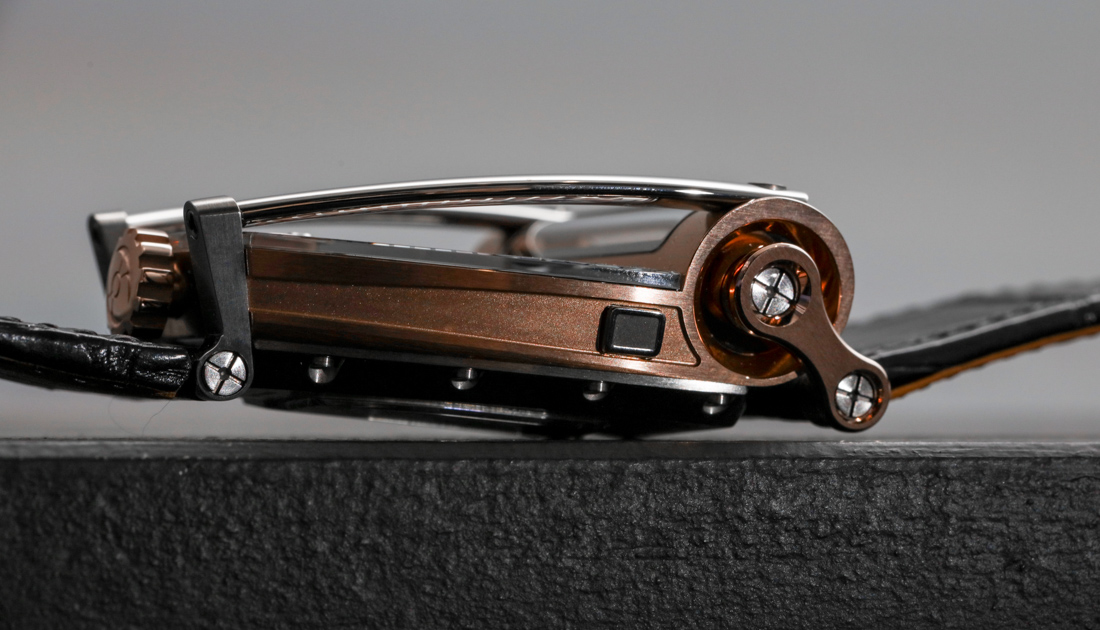 For fans of MB&F, it is immediately apparent that the MoonMachine 2 is based on another MB&F watch – the HM8 from 2016 – but with notable changes, of course. The case remains largely unchanged, measuring 49mm across and 51.5mm lug-to-lug. Thickness is 19.5mm and it is made out of 59 components in total. It’s a big watch and it wears large on the wrist too. And because sapphire crystal forms so much of the watch – the entire top of the watch is sapphire, mind you – it seems even larger than its dimensions would suggest. 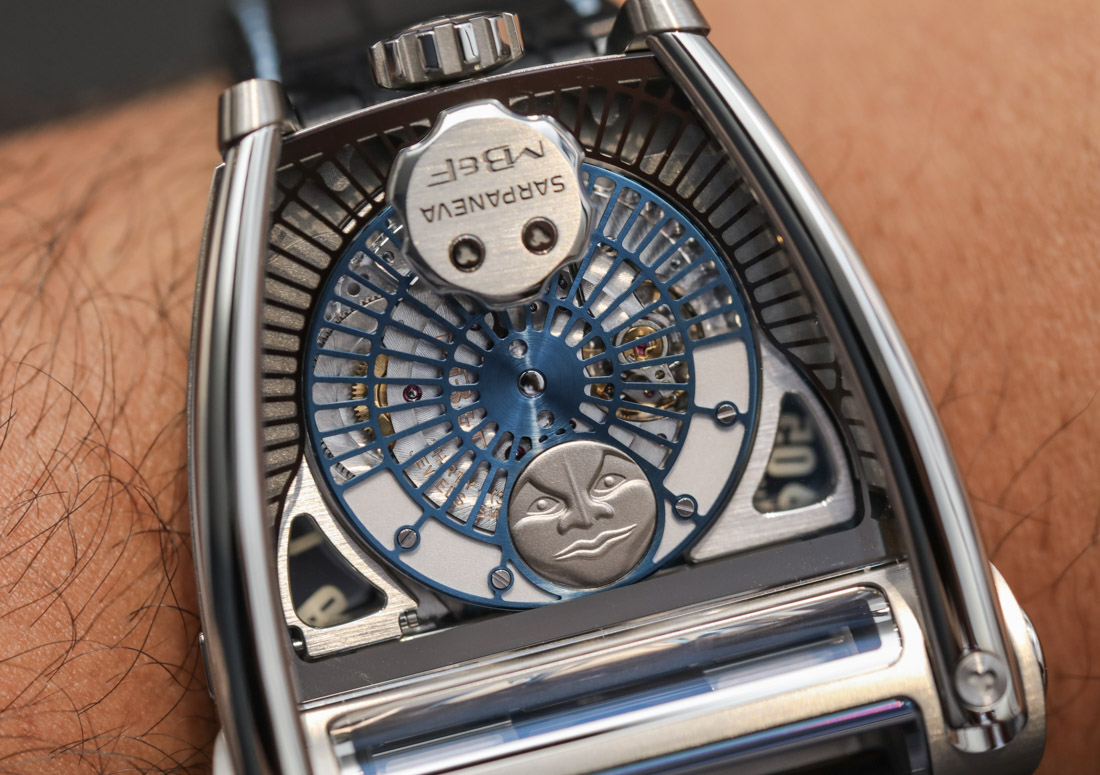 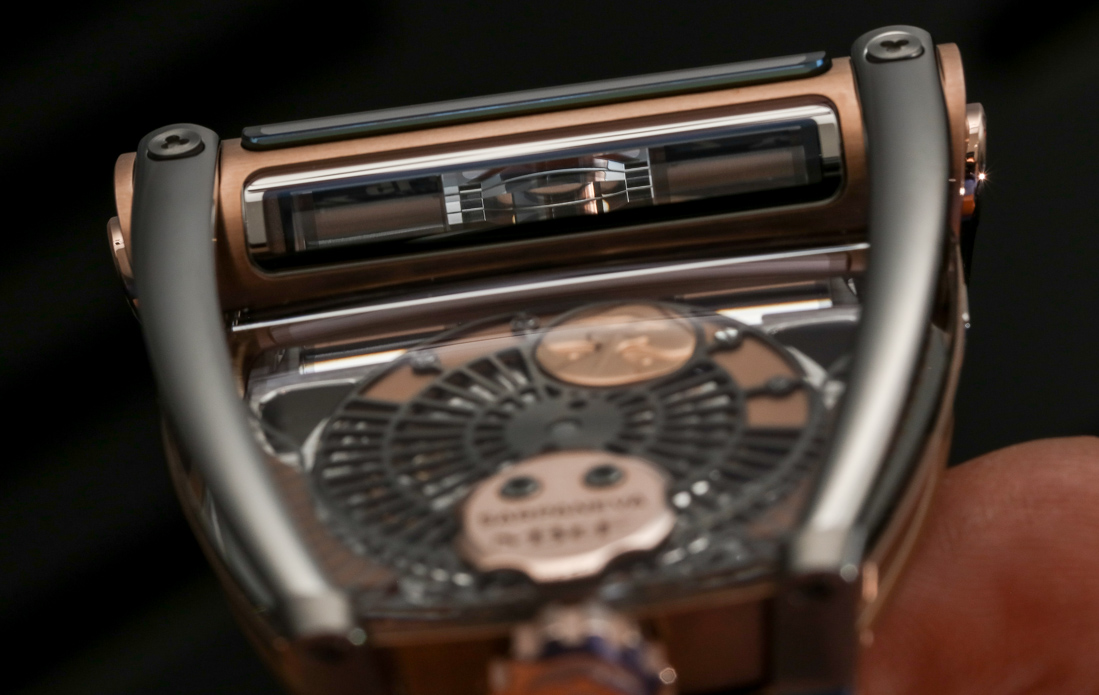 The MoonMachine 2 will be available in three different metals – full titanium, blacked titanium, and red gold with titanium – with minor differences between the three. Like the HM8, the MoonMachine 2’s case resembles the roll cage of a race car, with beams that seem to protect the sapphire and movement within. We got to handle the full titanium and red gold models and were thoroughly impressed by the case construction and finishing. 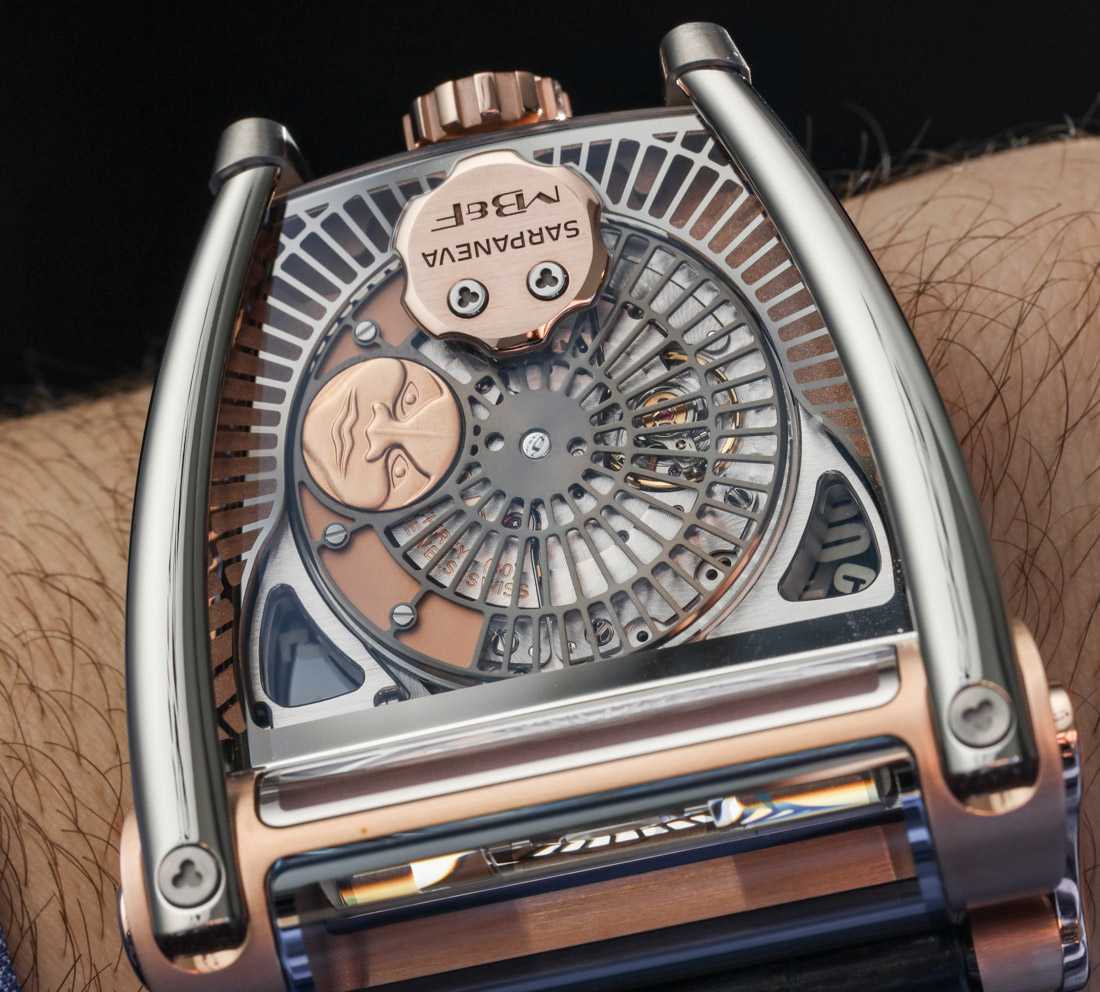 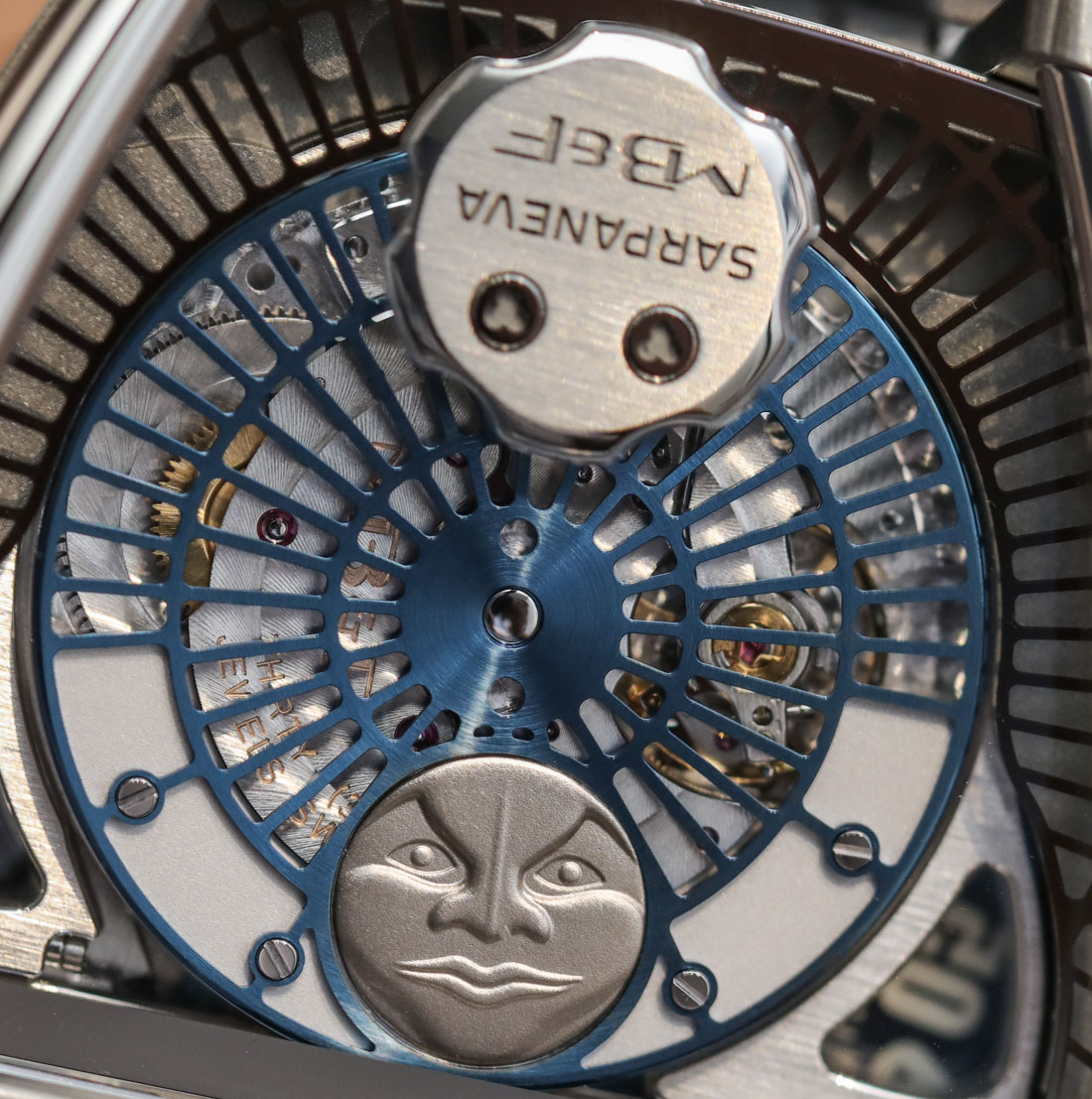 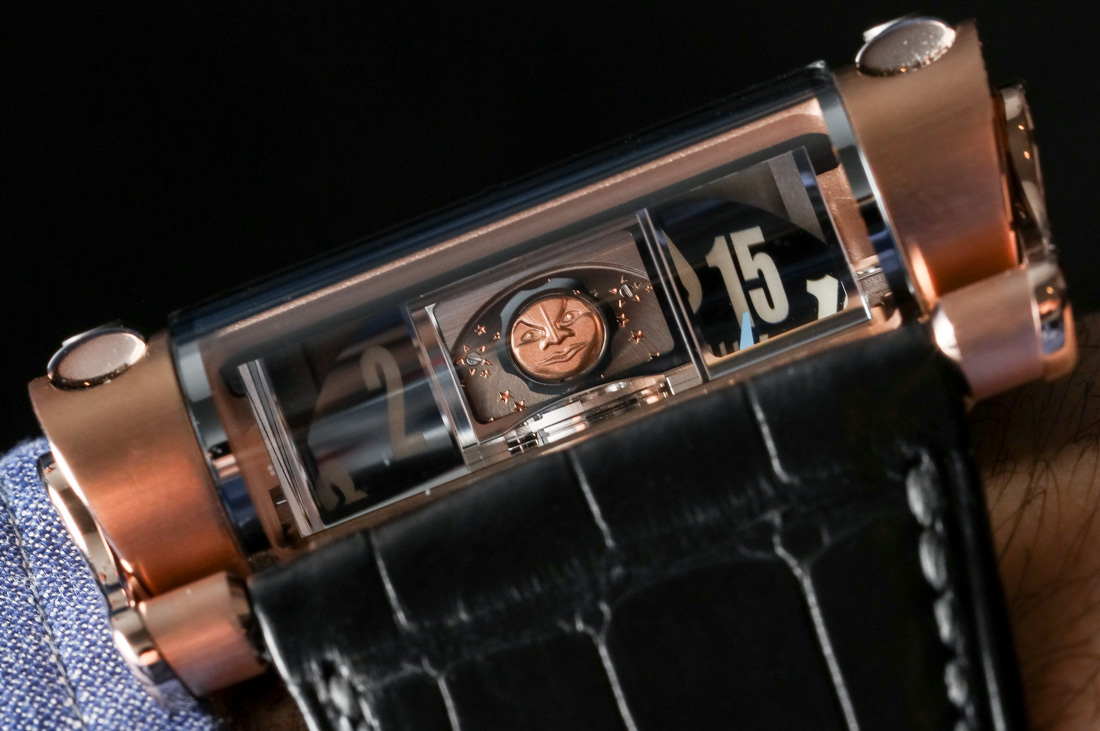 Like the HM8, time is displayed in the MoonMachine 2 on a vertical display using a special projection system. However, in the MoonMachine 2, there is an added moon display in between the jumping hours and wandering minute displays. Like the time indication, the moon phase is actually projected onto the vertical display using a specially-constructed optical prism. According to MB&F and Stepan Sarpaneva, this is the first watch in the world to have a projected moon display. 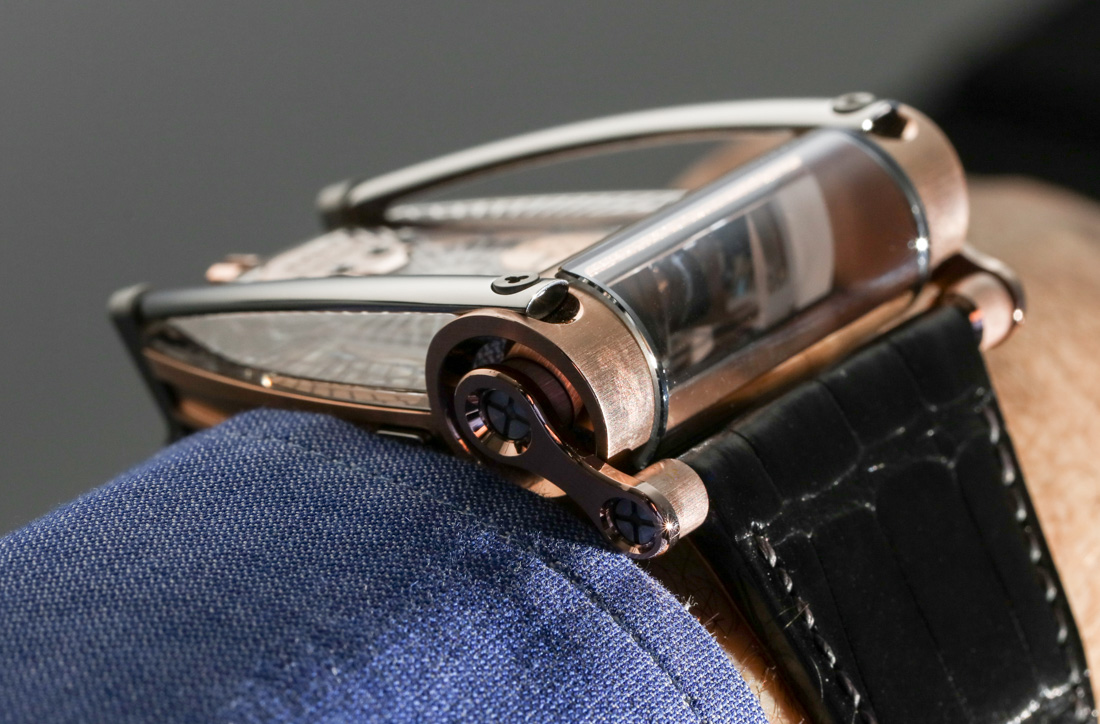 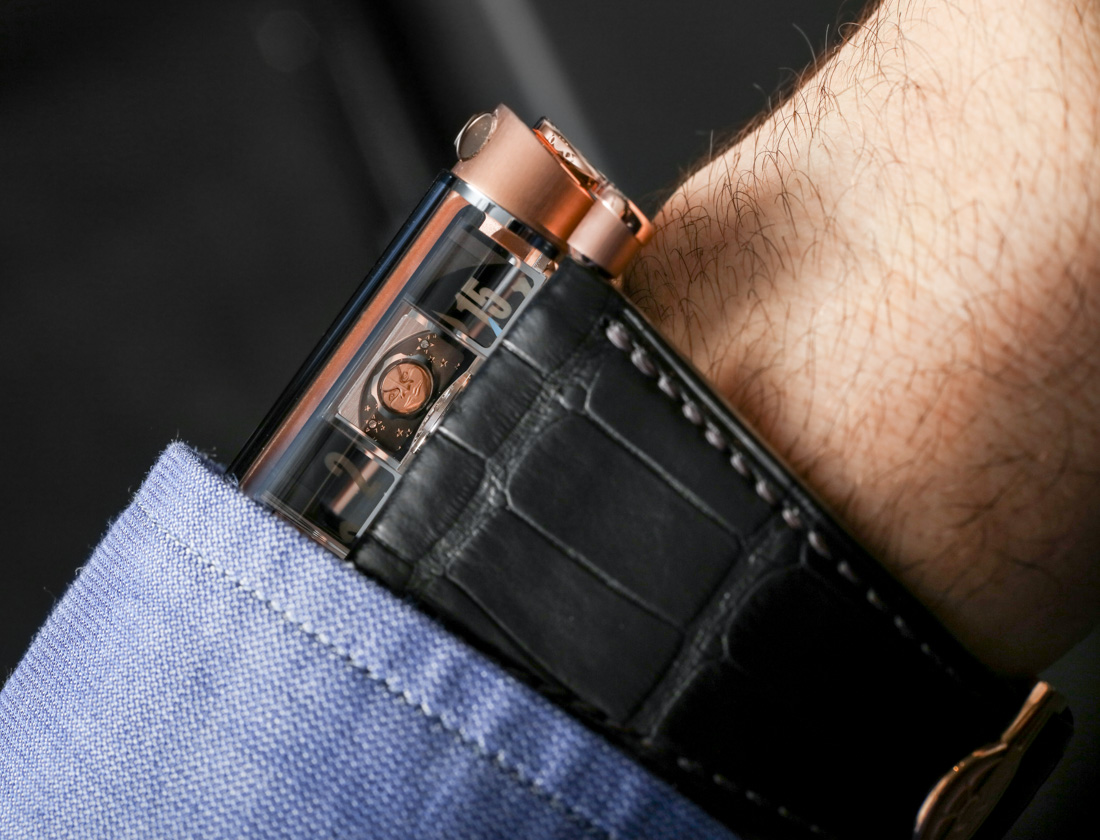 As you would expect, the moon phase display also features Sarpaneva’s unique moon face. The red gold and titanium models will have red gold moons against an anthracite sky, whereas the full and blackened titanium models will have white gold moons against a dark-blue sky. Interestingly, Sarpaneva says these are the smallest moon faces that he has ever made and that their creation presented many challenges to him. In particular, he mentions that the faces used for the moon phase display are very thin. The areas around the eyes are just 0.07mm thick, and since gold is very soft, finishing around the eyes was very tricky. To give you an idea of just how tough it is to perfect these moons, Sarpaneva revealed that roughly 8 out of every 10 moon faces are discarded because they could not meet his standards. 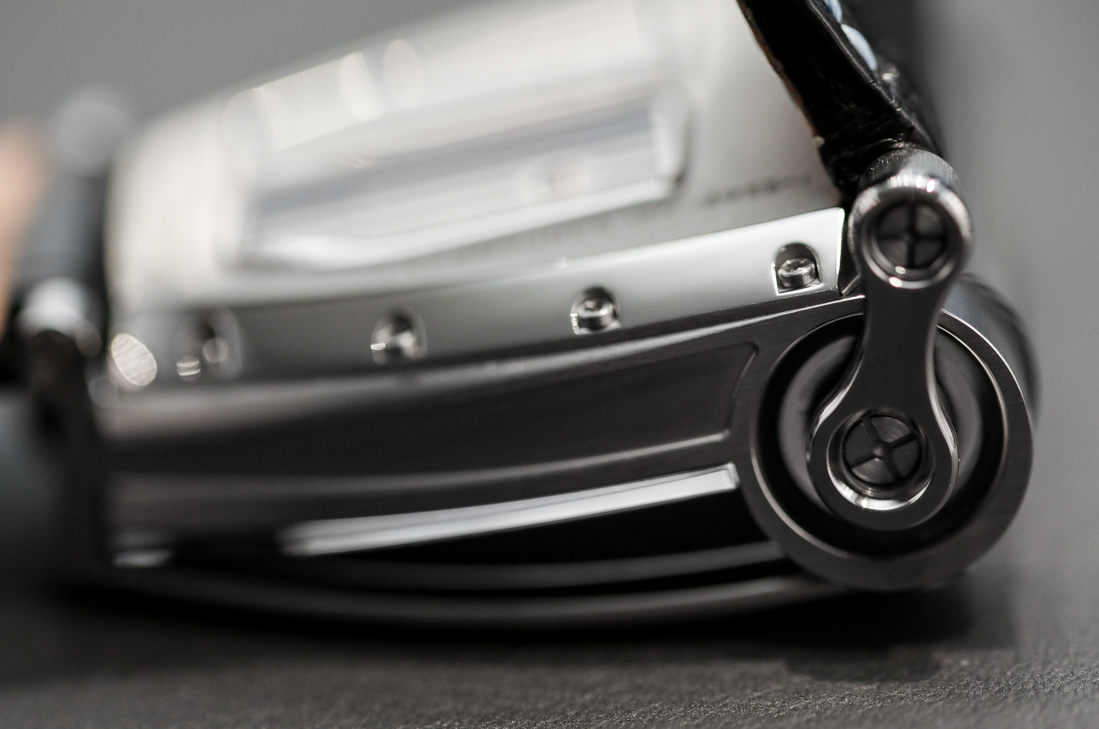 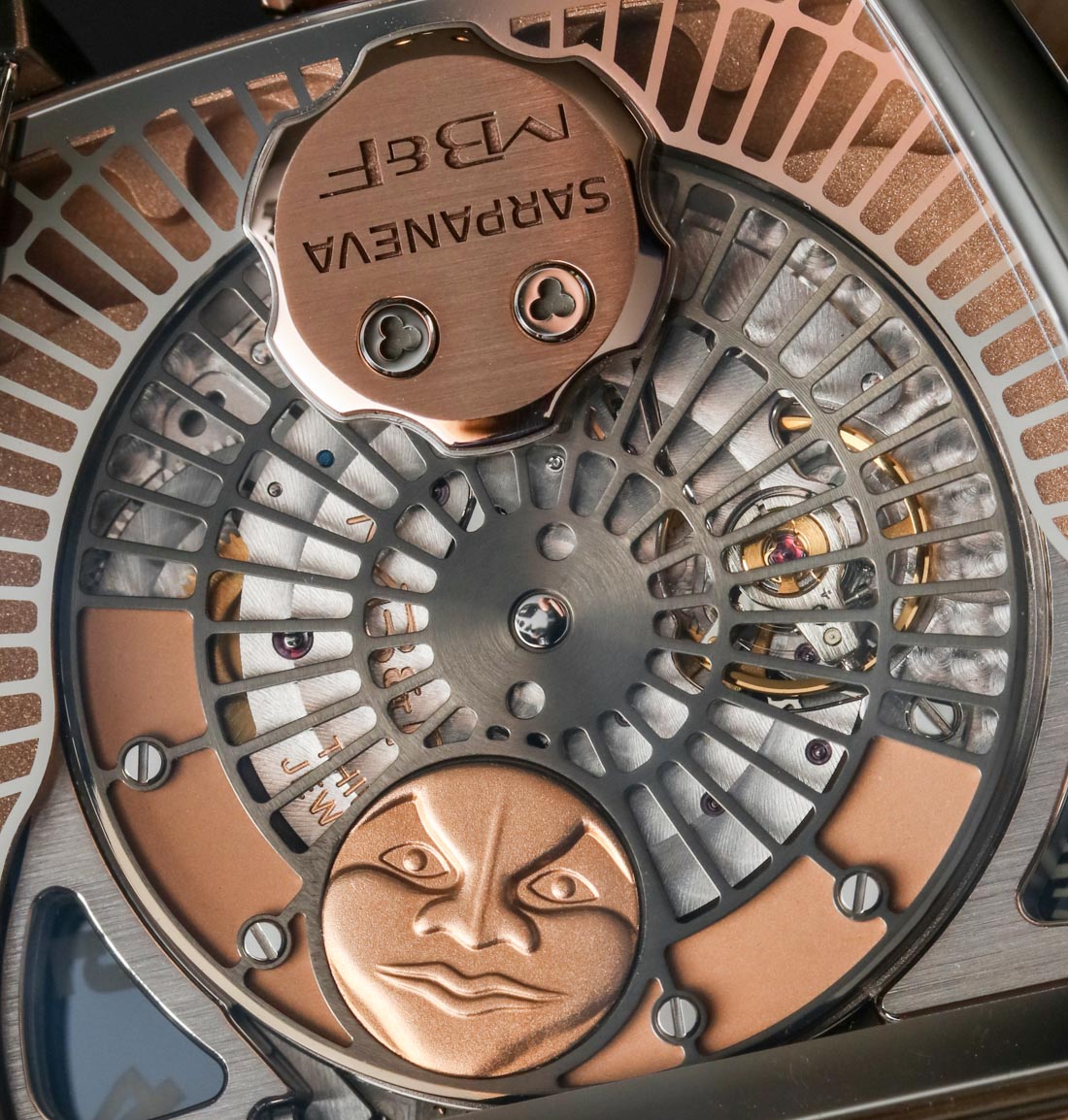 In any case, the results are worth it. The vertical display might be a little tricky to read since the display can only be properly seen at certain angles, but get it right and it looks fantastic. To aid in legibility, the hours and minutes are actually slightly magnified by the optical prism. The moon phase, however, isn’t magnified as any magnification would cause optical distortion to the moon face. To correct the moon phase, there’s a pusher by the left side of the case. 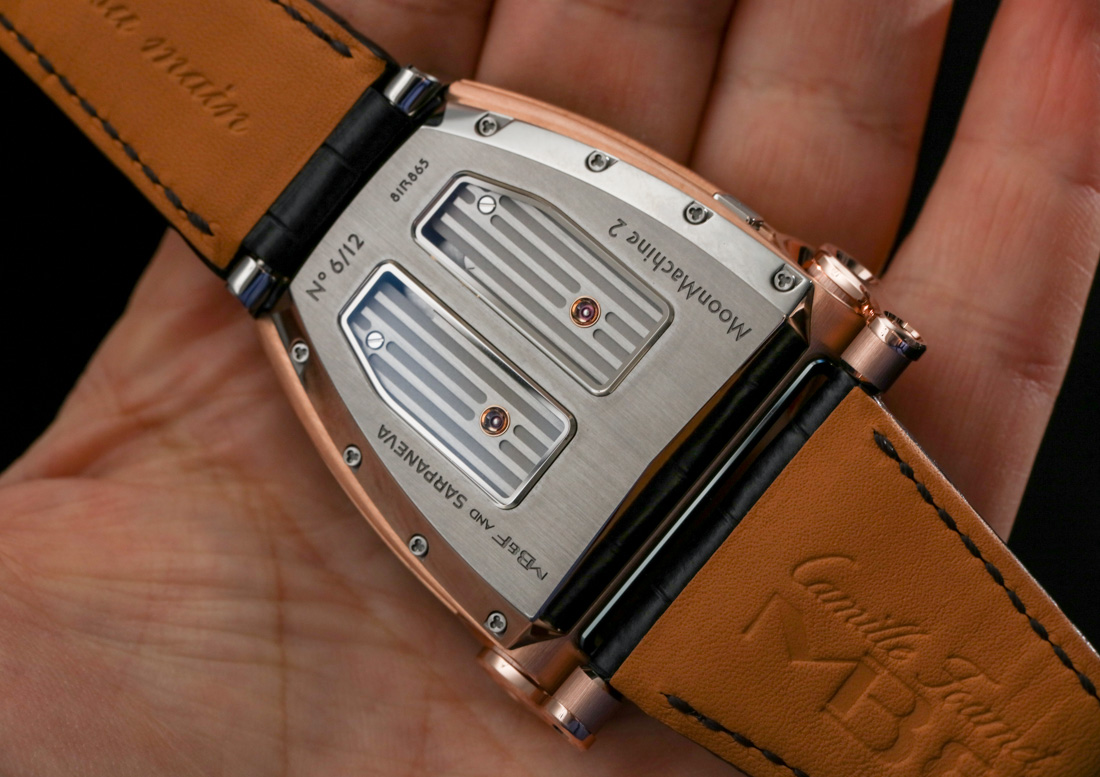 The movement within is a highly modified version of a base Girard-Perregaux automatic caliber with the additional moon phase complication added on by Stepan Sarpaneva. It consists of 293 components, beats at 4Hz, and has a power reserve of 42 hours. 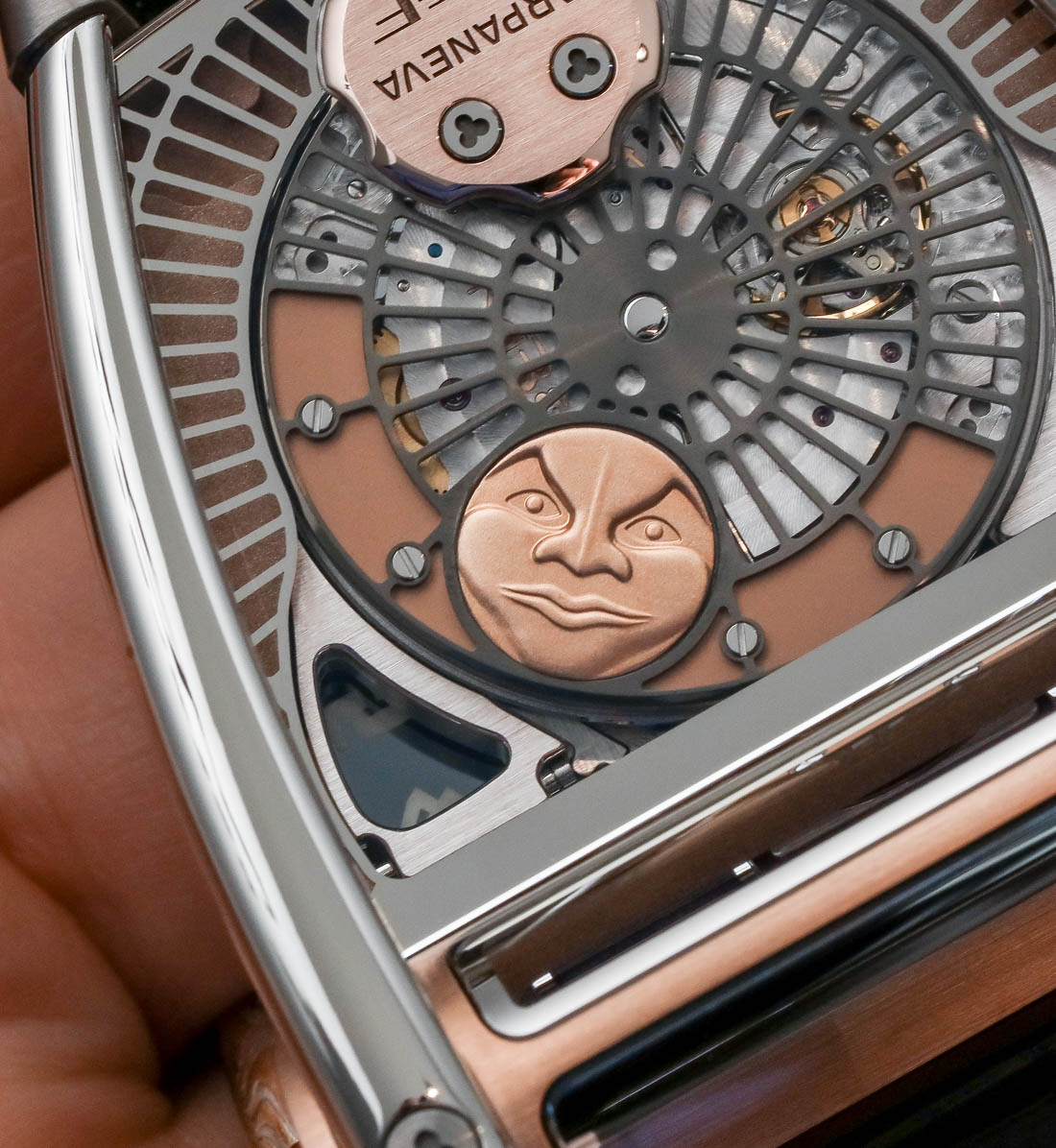 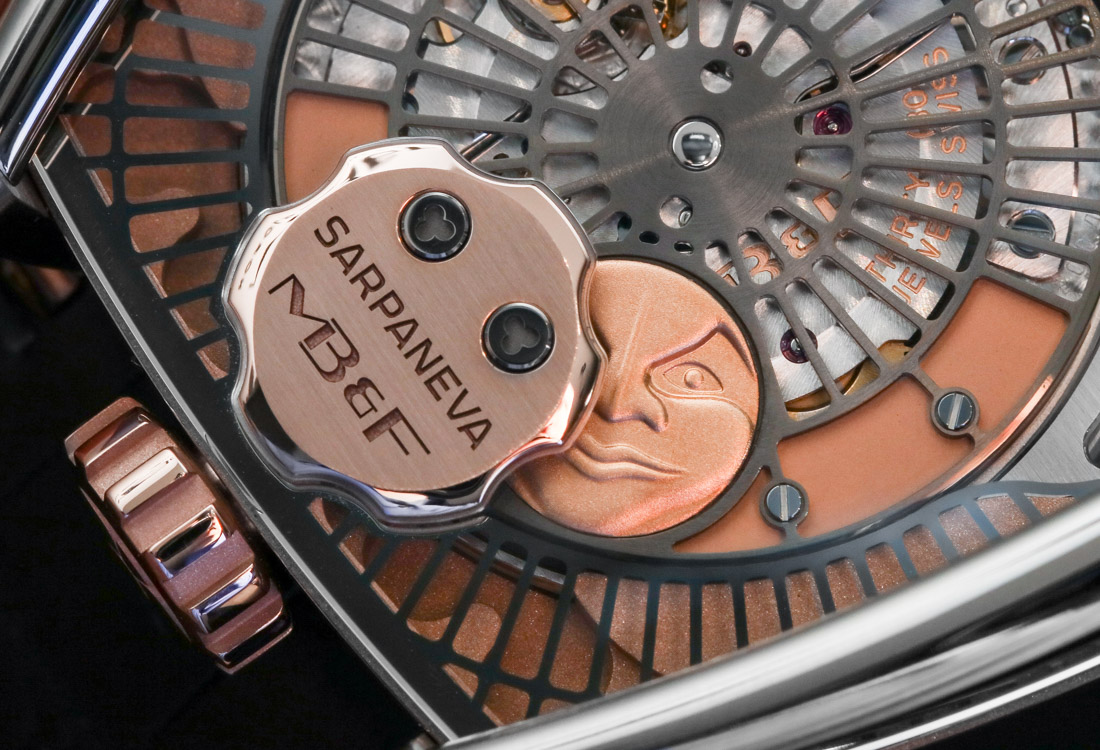 The MoonMachine 2 continues MB&F’s strong tradition of mixing high-end complicated watchmaking with playful and unique designs. And I think what makes the MoonMachine 2 such an awesome piece is that it successfully melds distinctive elements – the unmistakable case of the HM8 and the instantly recognizable Sarpaneva moon face – from two different brands into a single watch that doesn’t look disjointed or awkwardly pieced together. The MB&F MoonMachine 2 is offered in full titanium and blackened titanium at 88,000 CHF, and red gold and titanium at 95,000 CHF. Each version is limited to just 12 pieces. mbandf.com