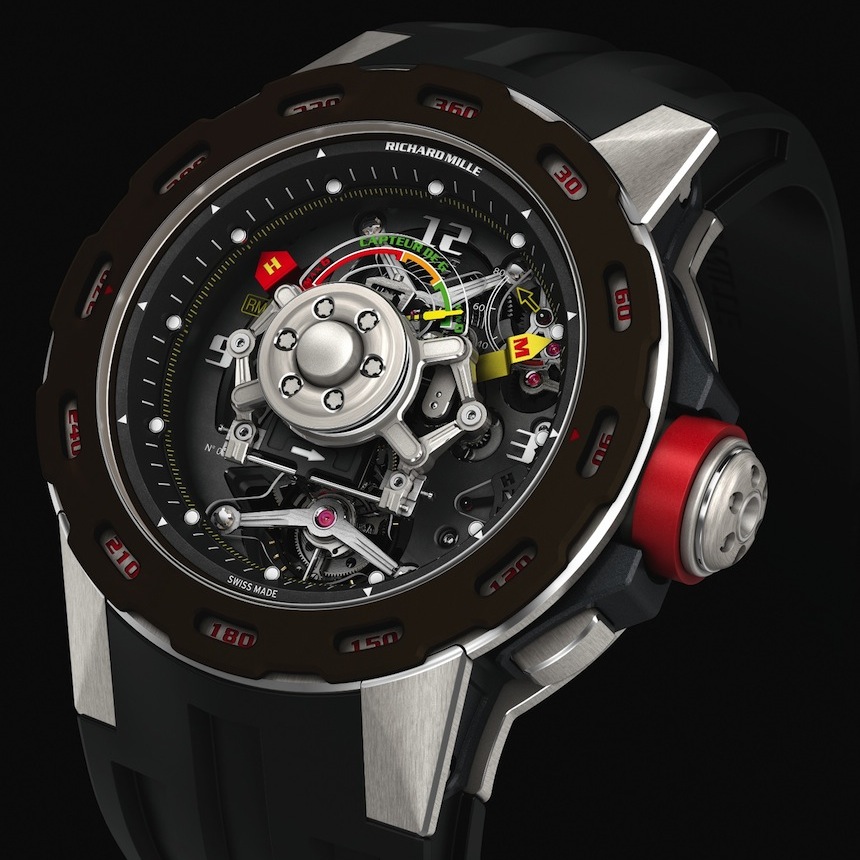 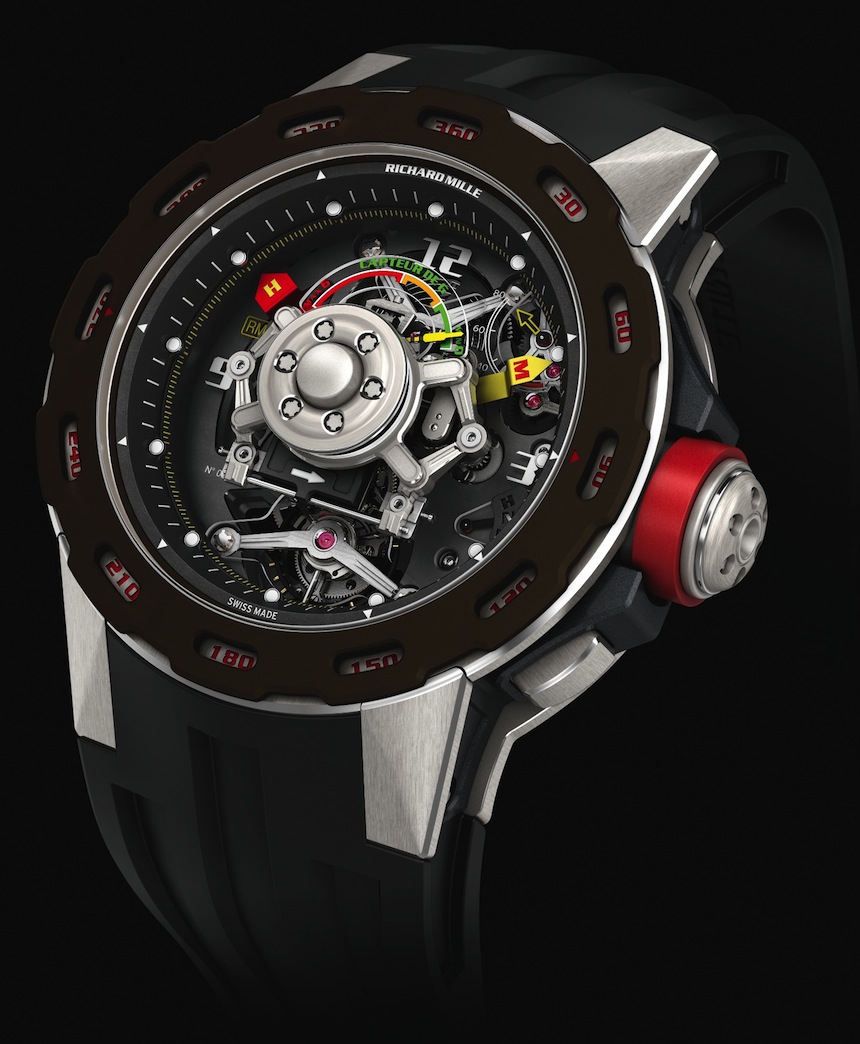 At last year’s SIHH, Richard Mille presented to the world the RM 036, a 15-pieces limited edition of what was their first wristwatch equipped with a G-force sensor. With the RM 36-01, a new piece for the 2014 SIHH, the brand reiterates the G-sensor technology with some modifications in both its construction and its presentation specially made for their rally car driving brand ambassador. And although the “RM 36-01 Competition G-Sensor Sebastien Loeb” makes little sense as a name, it does rather well at describing some of the key features of this 47.70 millimeter lightweight monstrosity. This is also Loeb’s debut watch being a Richard Mille ambassador. Previously he was with Marvin watches and has a Loeb chronograph made with them.

To begin with the most outlandish of them all, the G-force sensor has been slightly redesigned. While its needle read-out at 12 o’clock still does not offer an exact numerical indication for the extent of G-forces the wearer experienced, on its scale it is now printed to measure up to 6 G’s. To give you an idea, that is just about the maximum that a Formula-1 car generates in the fastest, nastiest of corners and you really need some of the best and latest supercars on the market to get near that. A more significant update is one that implies that the G-sensor as it were was not “in-your-face” enough – literally. To change that for the better, the reset pusher, previously located on the case at the 9 o’clock position, is relocated to the very center of the dial, protruding from the sapphire crystal. If anything, presumably it should make resetting easier and faster in demanding situations such as not crashing your supercar while fiddling with your watch trying to impress your passengers. Finally, the sensor, composed of over 50 parts and measuring 17mm in diameter, can now be manually rotated to align with the direction of one’s movements by turning the brown ceramic bezel. This allows for the specific and more accurate measurement of different movements, such as cornering, accelerating and braking. 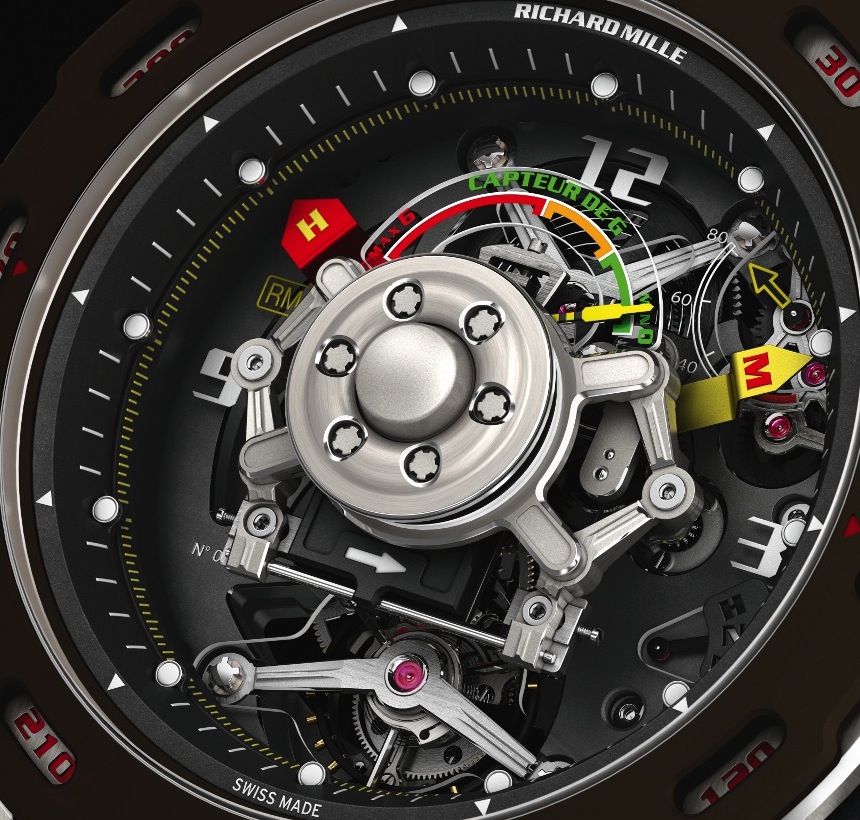 Moving on and away from sensor-madness, the previous model’s 42.7mm tonneau case – a trademark of Richard Mille – has been replaced with a round, three-part case of even heftier dimensions measuring in at 47.7mm in diameter and 17.37mm in thickness. “An extremely strong anthracite polymer injected with carbon nanotubes” was used for the middle section of the case, while the fixed bezel and the case back are made from grade 5 titanium. Unsurprisingly, the brand chose extremely durable and lightweight materials – just as we have seen them do for most of their high-performance pieces. It is water resistant to 30 meters, a limitation which is most likely linked to the push-button’s setting into the front sapphire crystal. The dial is a 0.40 millimeters thick sapphire disc, treated with anti-reflective coating on both sides.

The movement inside is a manual winding tourbillon with several unique twists. As in the case of its predecessor, the one-minute tourbillon beats at 3 Hz (or 21,600 vph) and – as another glimpse towards more traditional aspects of haute horlogerie – it features a balance wheel with weight screws set in its rim for variable moment of inertia. Traditionalism ends right there for Richard Mille as the baseplate and the bridges are made from a special alloy of 90% grade 5 titanium, 6% aluminum and 4% vanadium, making them extremely rigid and resistant to corrosion, race car driving, or sitting in a collector’s safe. According to the brand the components have been subjected to “complete validation tests” to optimize their resistance capacities. A more tangible feature is the Function selector, as seen on the dial between the 3 and 4 o’clock indexes. Actuated by the pusher set in the center of the crown, it allows the wearer to change between the winding (W), neutral (N) and the hand setting (H) functions by pressing the button. Furthermore, the time-setting mechanism has been fitted against the case back as a separate module, making repairs and removals of this part easier as the sensor and other sections of the movement need not be dismantled. 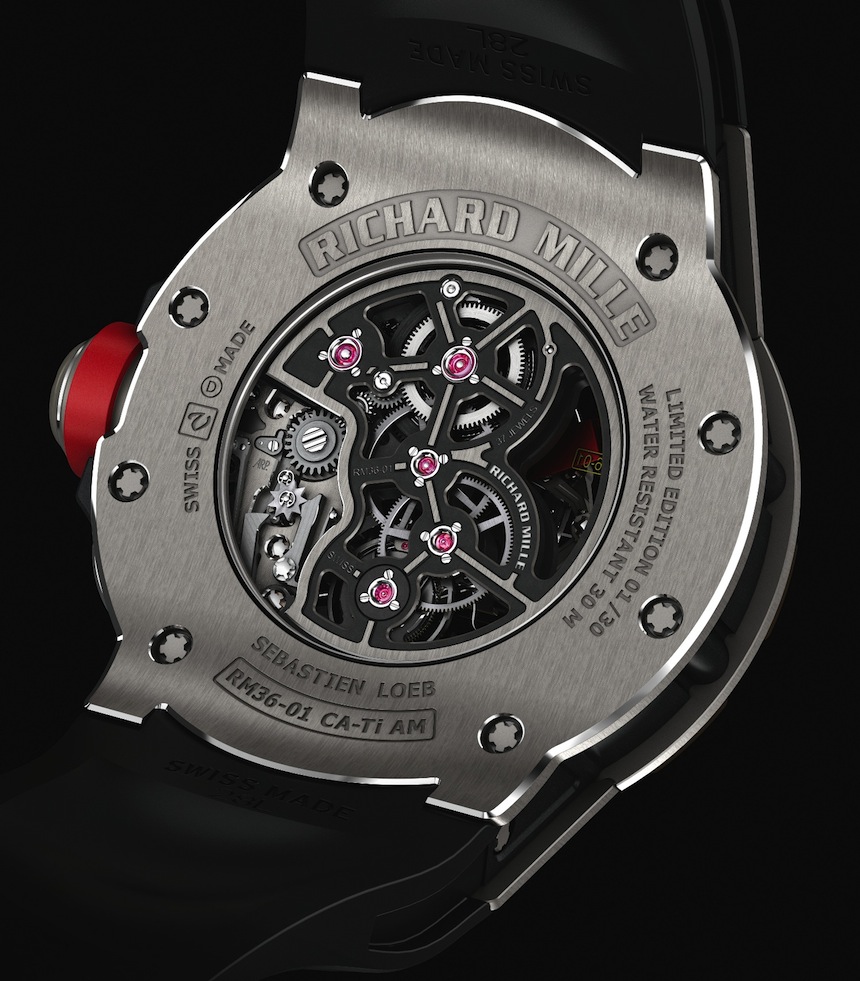 While the original RM 036 was dedicated to Jean Todt and his initiative for road safety – as the sensor was supposed to warn the driver upon reaching “unsafe” amounts of G’s –, this time around the brand went for a collaboration that is more dynamic in its nature and perhaps more exciting for fans of motor racing. They teamed up with French rally driver Sebastien Loeb. Loeb is the most successful driver in the history of World Rally Championship (or WRC for short), having won the championship nine times in a row. In fact, he is one of the fastest and most consistent drivers ever. Just search for his name and Pikes Peak on YouTube and you will see what I mean. Despite the negligible chances of anyone using this freak-ish instrument under racing conditions, Loeb is one of the few out there who can really put it to the test.

For those familiar with what Richard Mille does it should come as no surprise that this 2014 novelty although cares not to offer a truly useful complication, it packs some unique and – perhaps – excessively over-engineered features that indicate just what the watch making industry can achieve when it comes to miniaturization, durability and pushing the boundaries of not merely what can be made, but what can be sold. And sold not once, but 30 times over, as the RM 36-01 Sebastien Loeb limited edition consists of thirty numbered pieces, priced at $625,000 each. richardmille.com