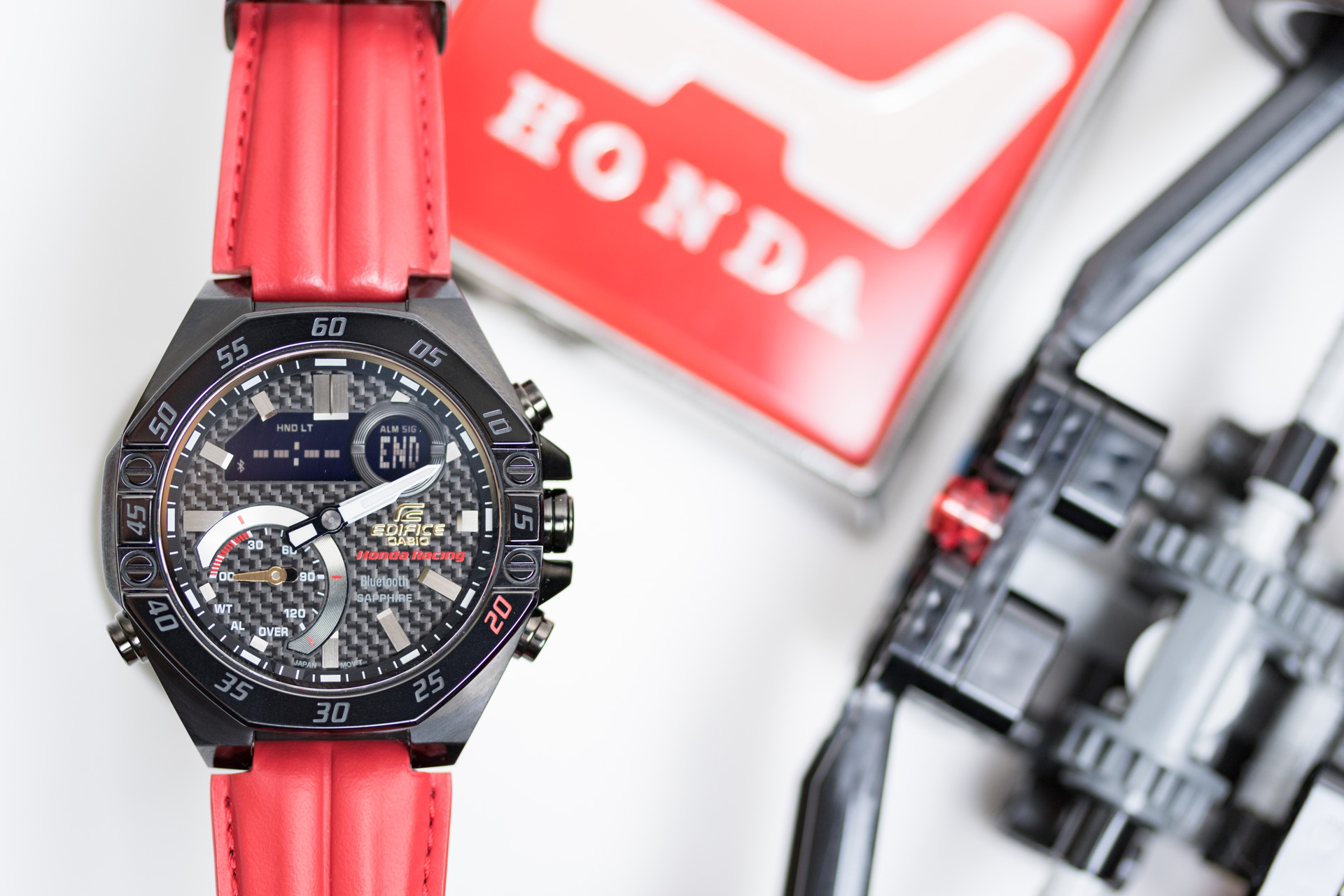 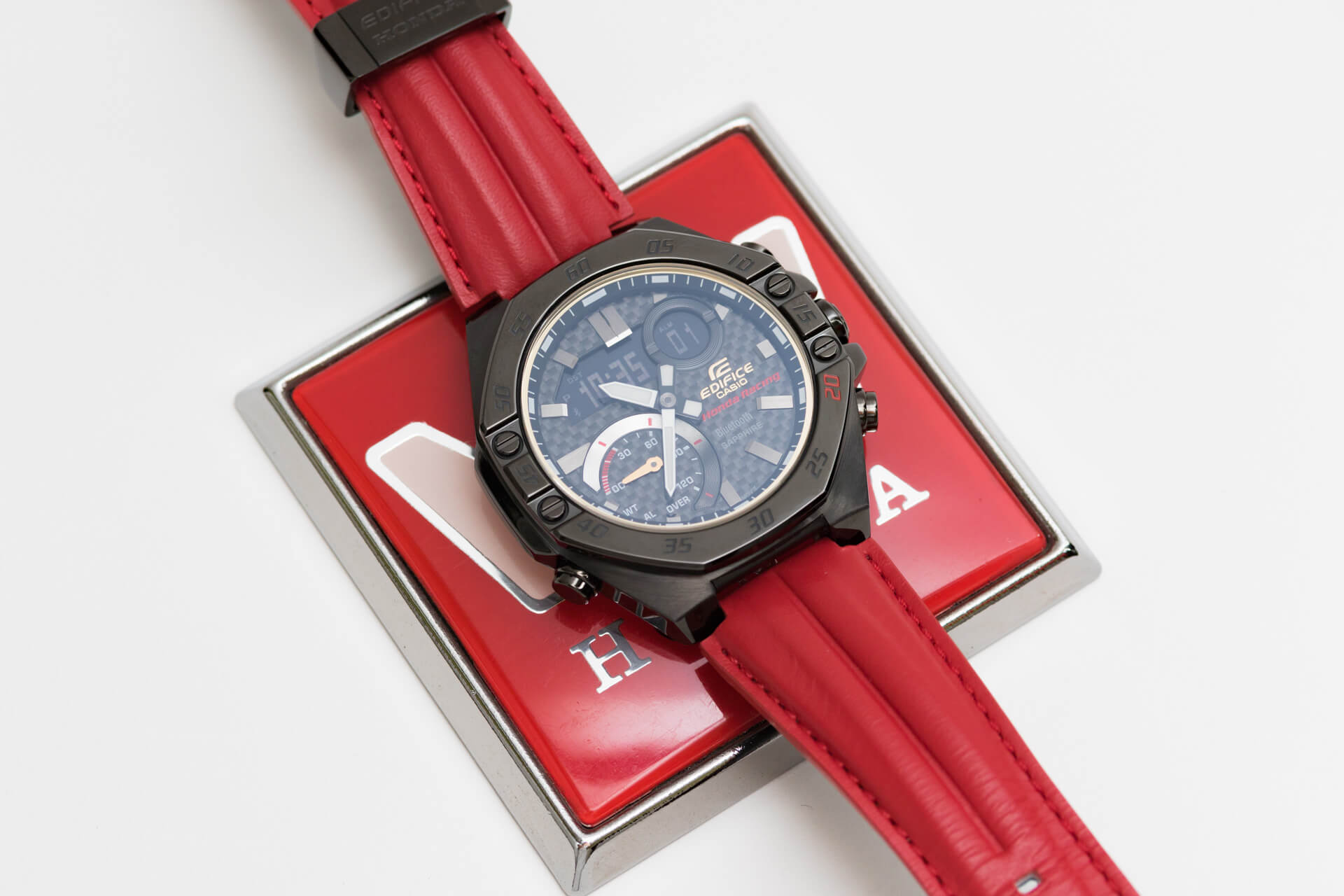 When considering purchasing a Japanese quartz watch under $500, many enthusiasts can quickly think of brands and sub-brands like Casio, G-Shock, Seiko, Seiko 5, Prospex, Citizen, and maybe any fashion brand with a Japanese quartz movement to broaden the landscape. But while reading my previous sentence, did you happen to think about Edifice and its collection of watches? If you did, bravo (silent golf clap), but if you didn’t, I wouldn’t blame you, as it’s always taken a back seat to G-Shock and it’s multi-platform marketing monster.

A lot like Liam Hemsworth. “Who?” you say.” Exactly. Liam’s a lot like Edifice, and his well-known brother, Chris Hemsworth (aka Thor, aka Tag Heuer Ambassador driving a Formula E race car) is akin to G-Shock. Sure, they come from the same pedigree, same DNA, have a similar appearance, and both are accomplished actors, but one’s just beefier and more relevant than the other. 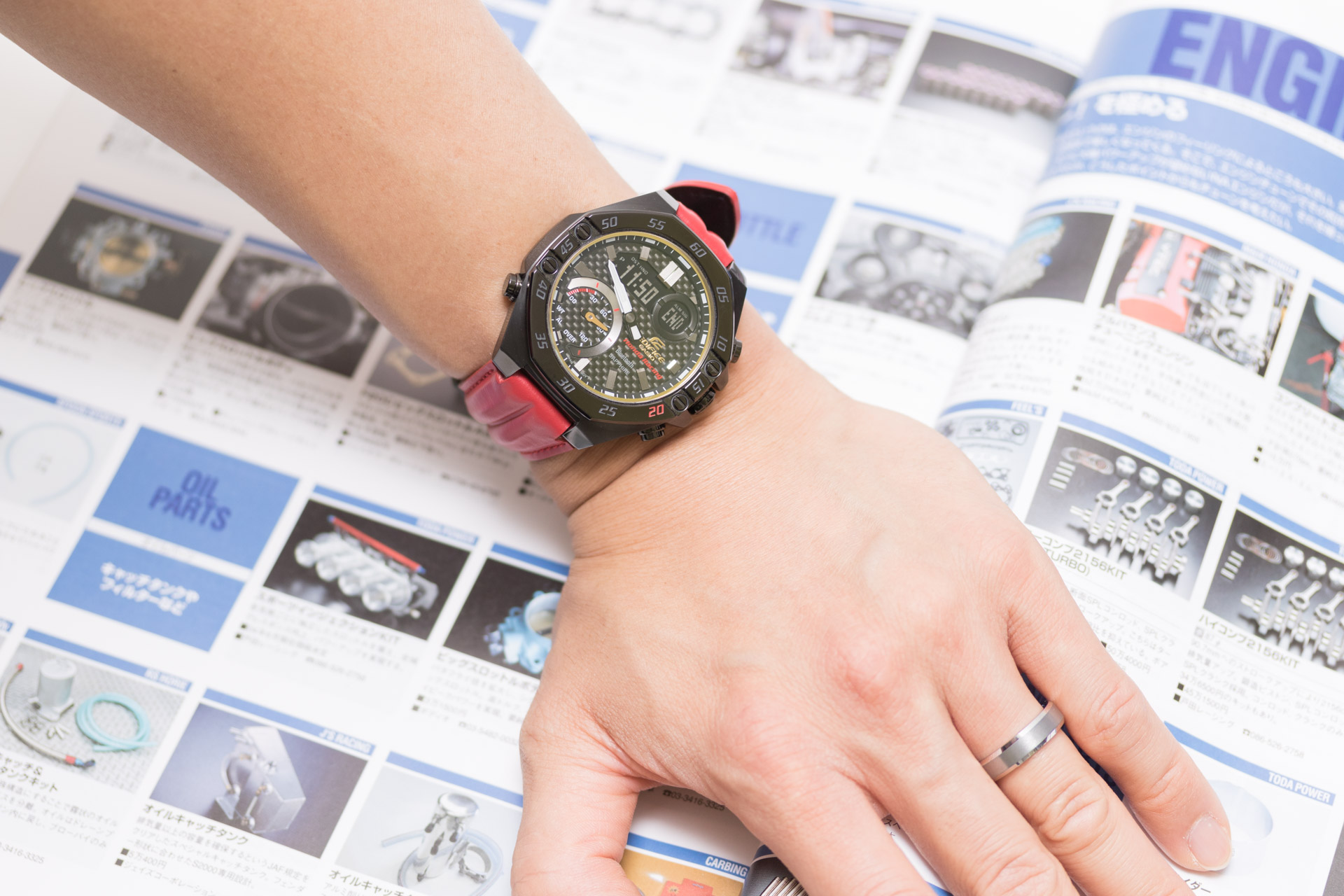 If we’re keeping track, aBlogtoWatch hasn’t done an Edifice hands-on since the EQWT720DC-1A back in 2012, which was almost a decade ago and about how long it took for me to write out that model name. The G-shock regularly gets hands-on coverage and, based on our track record, we’ll probably have another article by the time this one goes live.

So without further ado, I present to you the Edifice Honda Racing Limited Edition. Casio’s third collaboration piece between Edifice and Honda Racing. While being a Type-R enthusiast (which I am) warrants reason for owning this watch, there are other reasons you should consider this “Liam Hemsworth” of Casios, even if it has a polarizing red, ridged strap.

The limited-edition model piggybacks off Casio’s newest ECB lineup, which is a great thing, as it has Bluetooth capability and shares the strong faceted case design elements. The ECB models’ Bluetooth functionality gets an upgrade with iOS/Android calendar sync, but the Honda Racing version has a clever trick up its sleeve with wrist detection Auto LED illumination. These two additional functions contained within the 5618 quartz module are under-marketed, as they have real-life applications versus many redundant and often ancillary functions inside the dials of other Edifice and G-shock models. 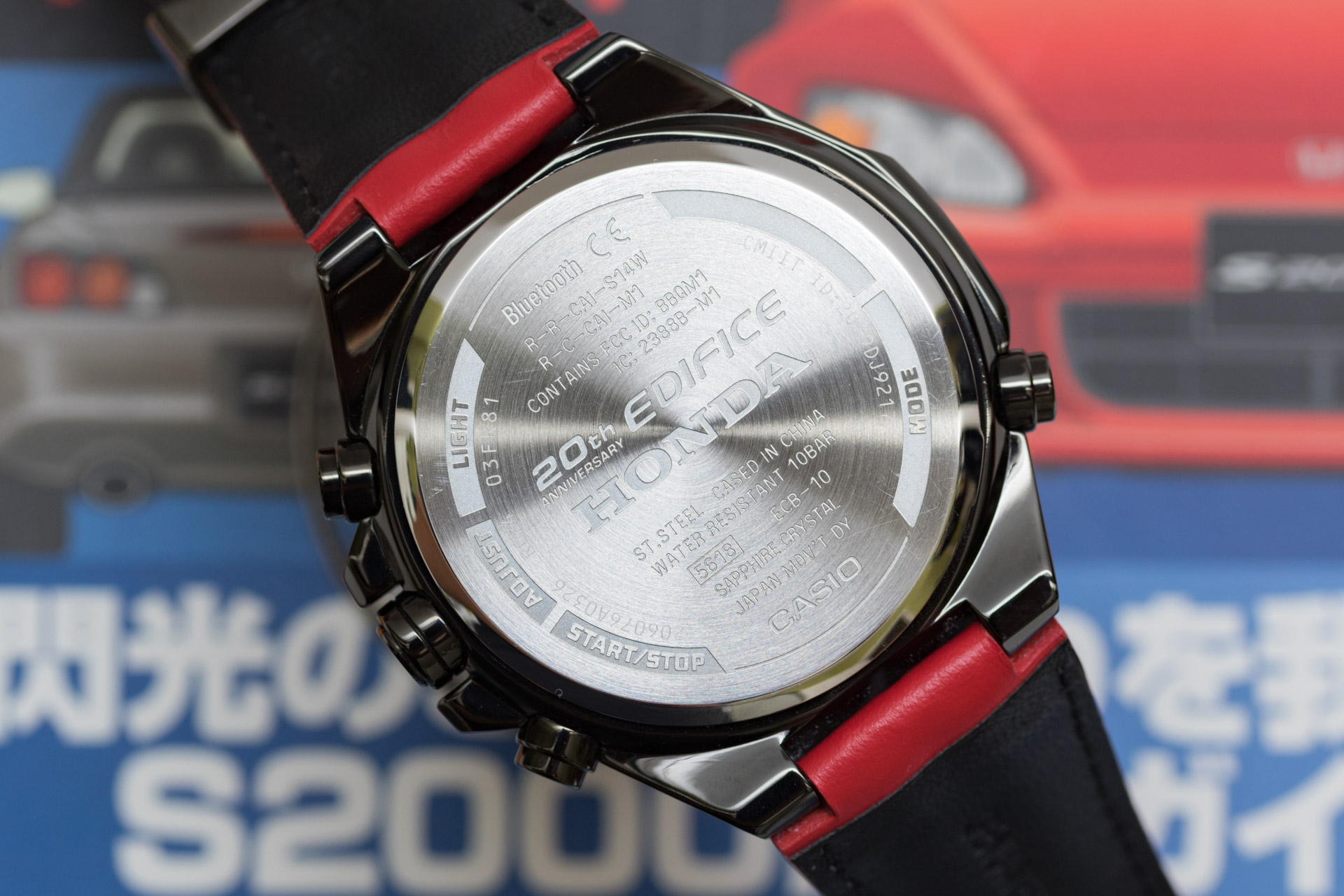 Exterior design characteristics remind me of the G-shock Aka Zonae with the red and gold accents. The gold accents are used to commemorate the 20th anniversary of the Edifice brand, and Honda Racing’s red is used to highlight the number 20 on the bezel, as well as the logo and other dial elements. The strap is made from leather and has a double-ridge design with color-matched stitching reminiscent of the Bulgari Octo Maserati Mono-Retro straps, and is finished with a metal keeper etched with the Edifice and Honda logos. 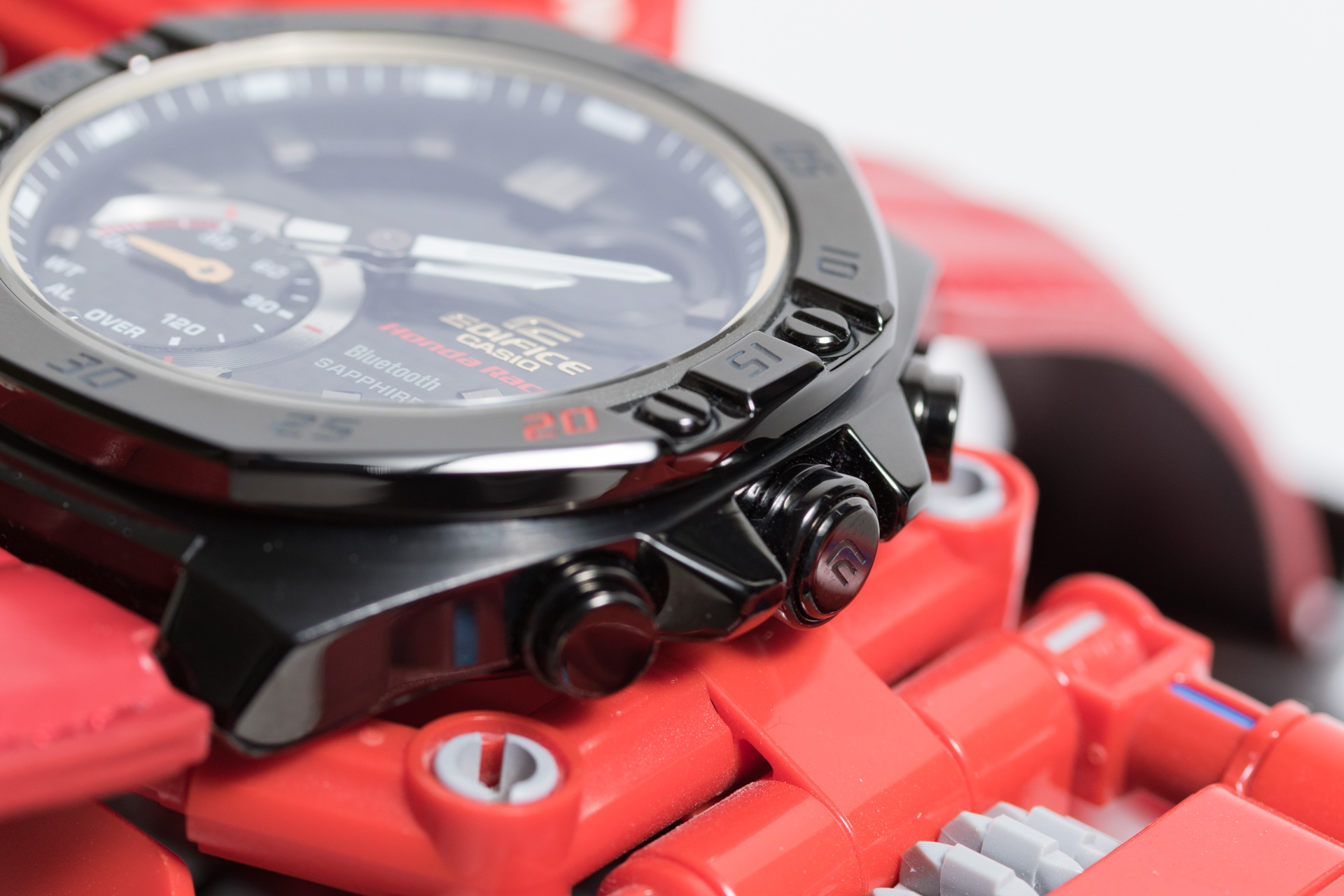 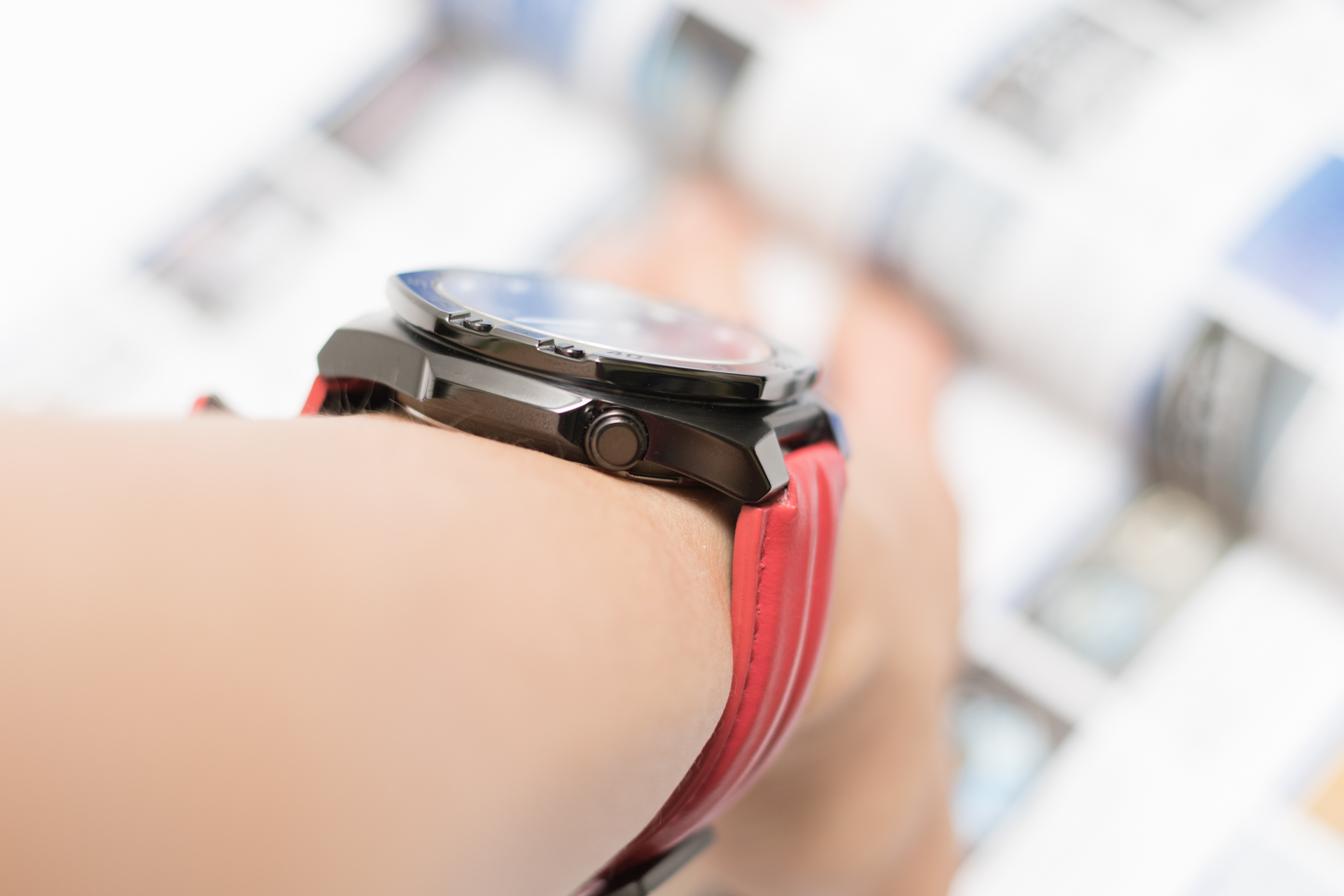 The case is forged from steel and finished with a black ion coating, which is par for course based on recent trends for sport models, but I find it doesn’t do the case justice. Specifically, the black ion coating hides a lot of the interesting facets on the case and renders the watch a little too flat in real life. The design attributes incorporate some of our favorite watch shapes, such as an octagon bezel with understated bezel bolts at 9 and 3 o’clock, a long trapezoidal button guard on the left side, and multi-faceted guards flanking the pseudo-crown. A couple dimensions that make this watch extremely wearable is the overall height at 13mm and the stubby lugs, which protrude a total of 4.2mm from the case, allowing the straps to lay closer to your wrist without having to excessively curve the lugs downward. 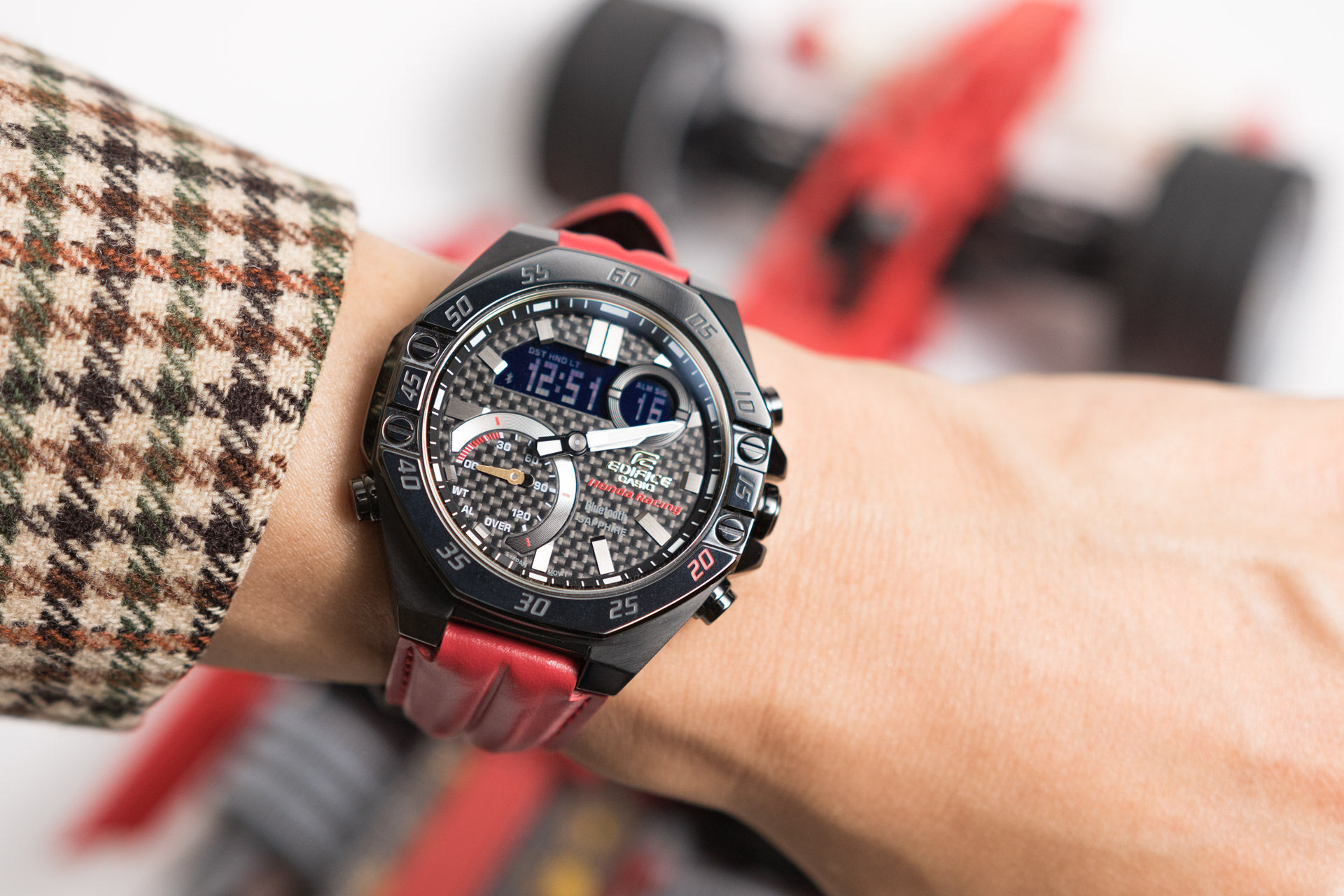 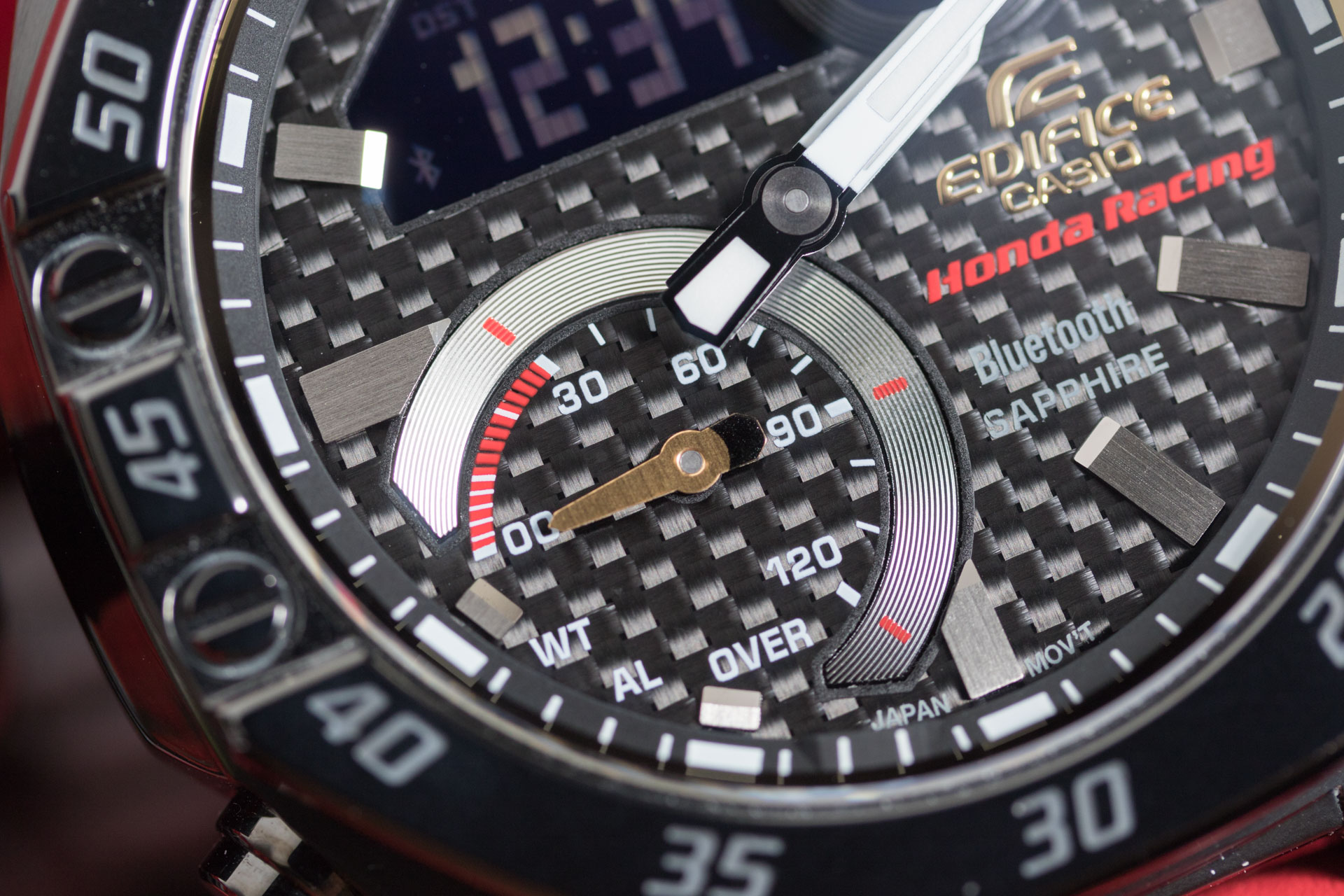 A woven carbon-fiber dial is glossy with flat-brushed metal hour indices married to an analog/digital display. The slightly oblong and cut subdial at 7:30 displays the different modes, as well as doing triple-duty as a stopwatch minutes/hour hand, countdown timer, and calendar appointment start/end indicator. The digital LCD readout for all the functions is gold-hued to match the rest of the color scheme.

While the dial isn’t cluttered with multiple function hands, subdials, or sub-digital displays, it can at times seem busy due to visual elements that actually make it hard to read the time. This is in contrast to the marketing photos depicting a crisp, almost 3D like dial appearance. My observations were that the glossy reflective woven carbon fiber dial had a tendency to camouflage the brushed hour markers, making them disappear into the dial, and the reflective gold elements have a “black mirror polish” effect that also makes them blend in with the dial at certain angles. The watch is topped with a sapphire crystal with non-reflective coating, but I found the flat surface was a glare magnet and contributed to the washing out of contrast under the dial. 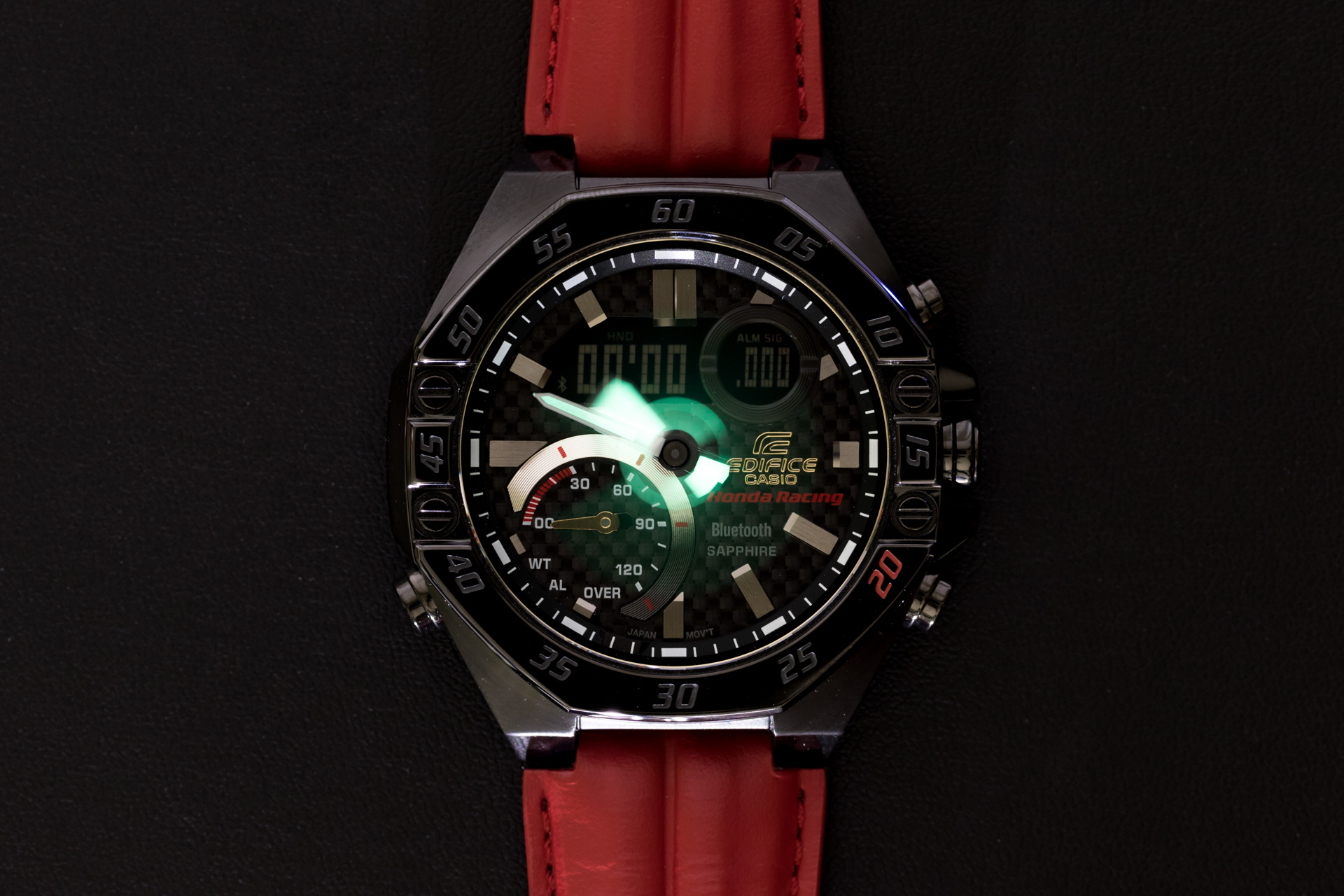 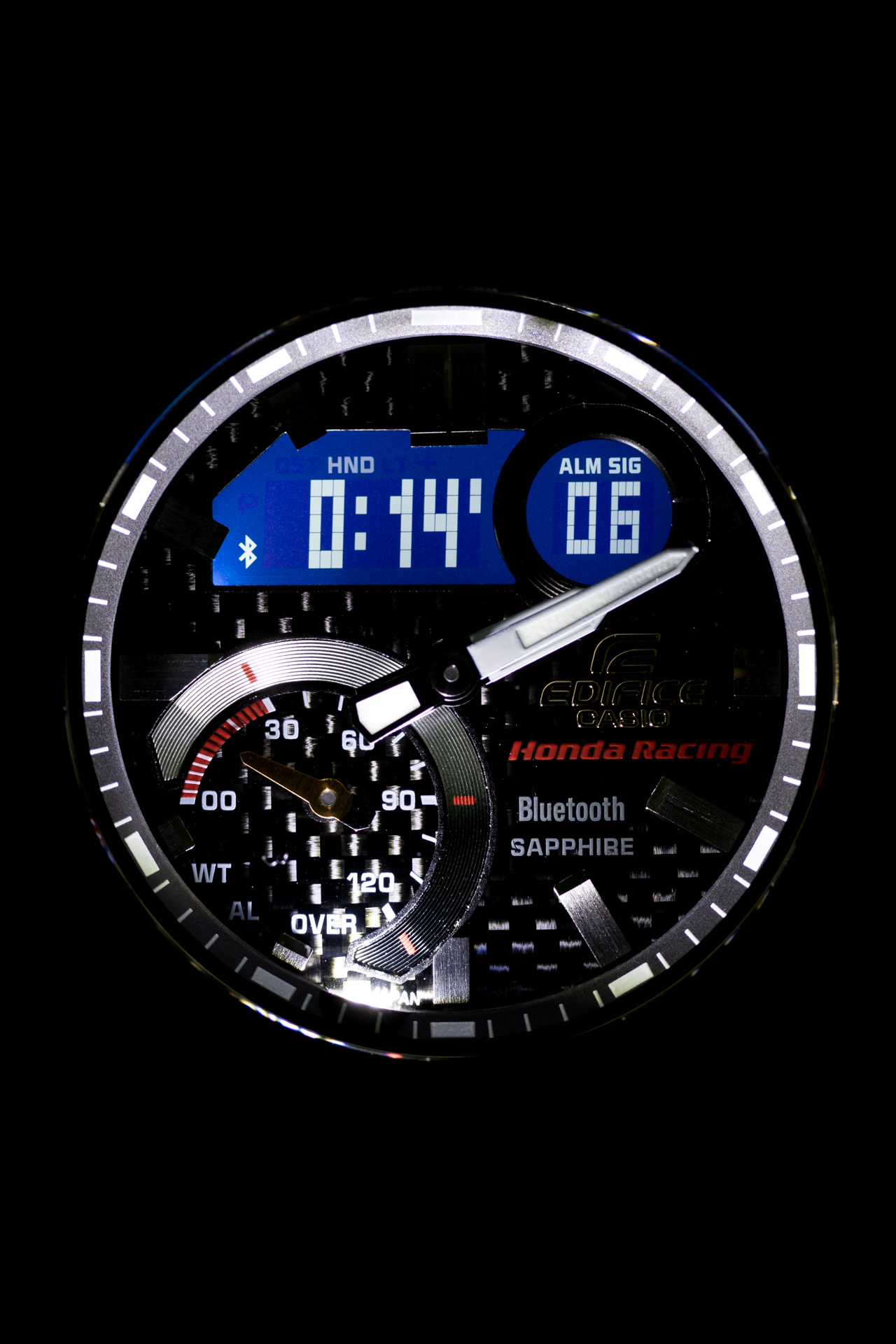 Fortunately, the legibility of the white accents are at their best when the dual LEDs illuminate the broad white hands, the highly reflective white printed hour markers on the chapter ring, and the backlit digital display. This watch’s execution of illumination is, by far, one of my favorites of all the Casios I have had a chance to try on, and the auto-illumination is reliable.

The auto-illumination time duration can be changed from 1.5 seconds or 3 seconds, which is activated and configured either through the watch directly or through the connected app. It’s activated when the wrist is turned past 15 degrees from the horizon. When making changes, I preferred using the app because trying to change this setting through the phone required over 15 presses of the mode button after you had gotten it into adjustment mode. The downside of this fantastic dual LED illumination is that it may blind you at night when checking the time mid-sleep; yes, I wear my watches to bed…I know, “weirdo.” 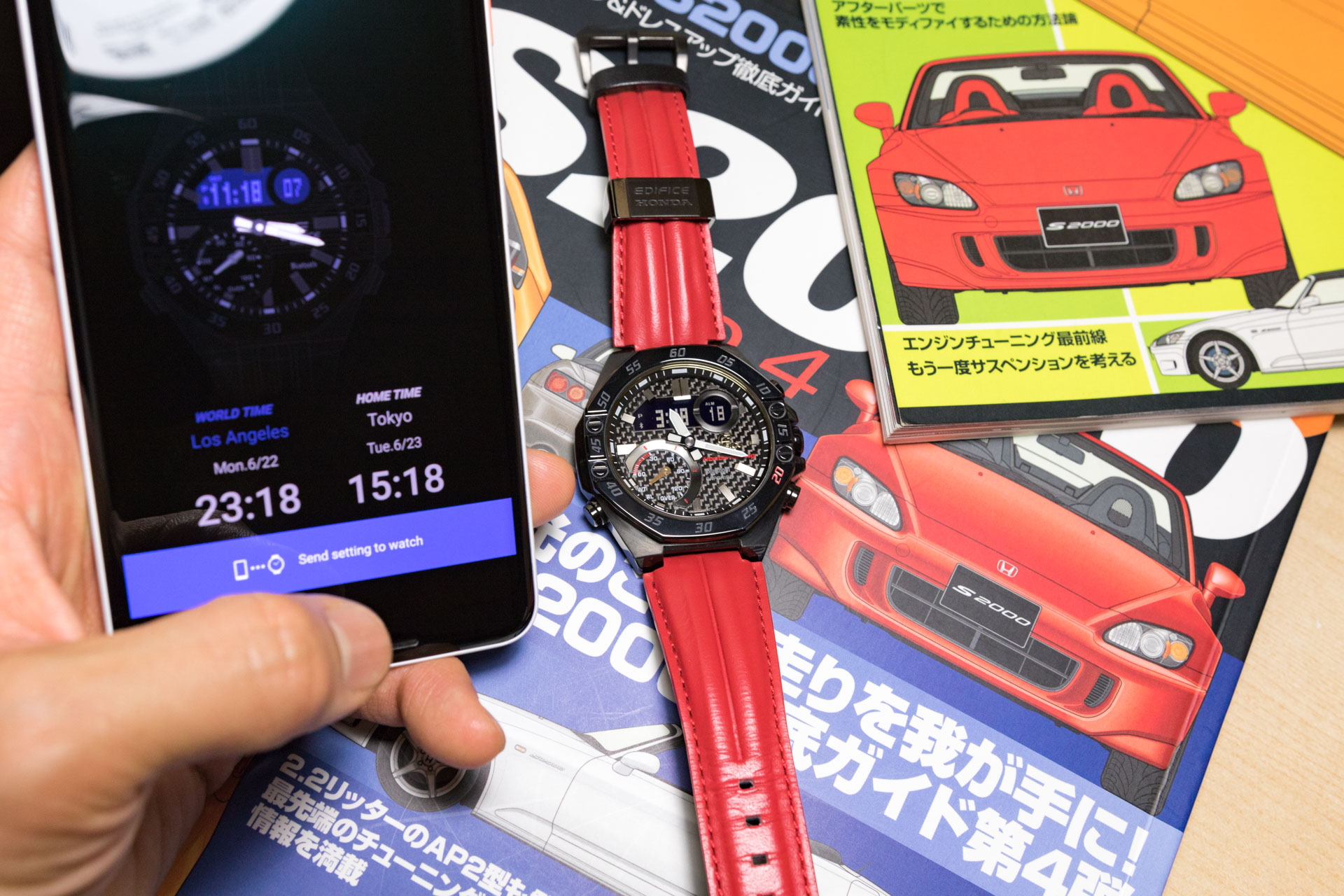 Bluetooth syncing allows for all the regular time adjustments but also syncs to your phone’s calendar appointments making forgotten meetings almost impossible. With the hourly signal “beep” turned on and my calendar synced, it would give me a modulating beep whenever I had an appointment coming up and start the countdown till meeting start, after which the watch will countdown the time allotted for the meeting and then reset automatically to the next calendar event, starting the countdown process again. After using it a few times, especially days with multiple appointments, it started to look like a digital calendar-event retrograde complication, if ever there was a thing, 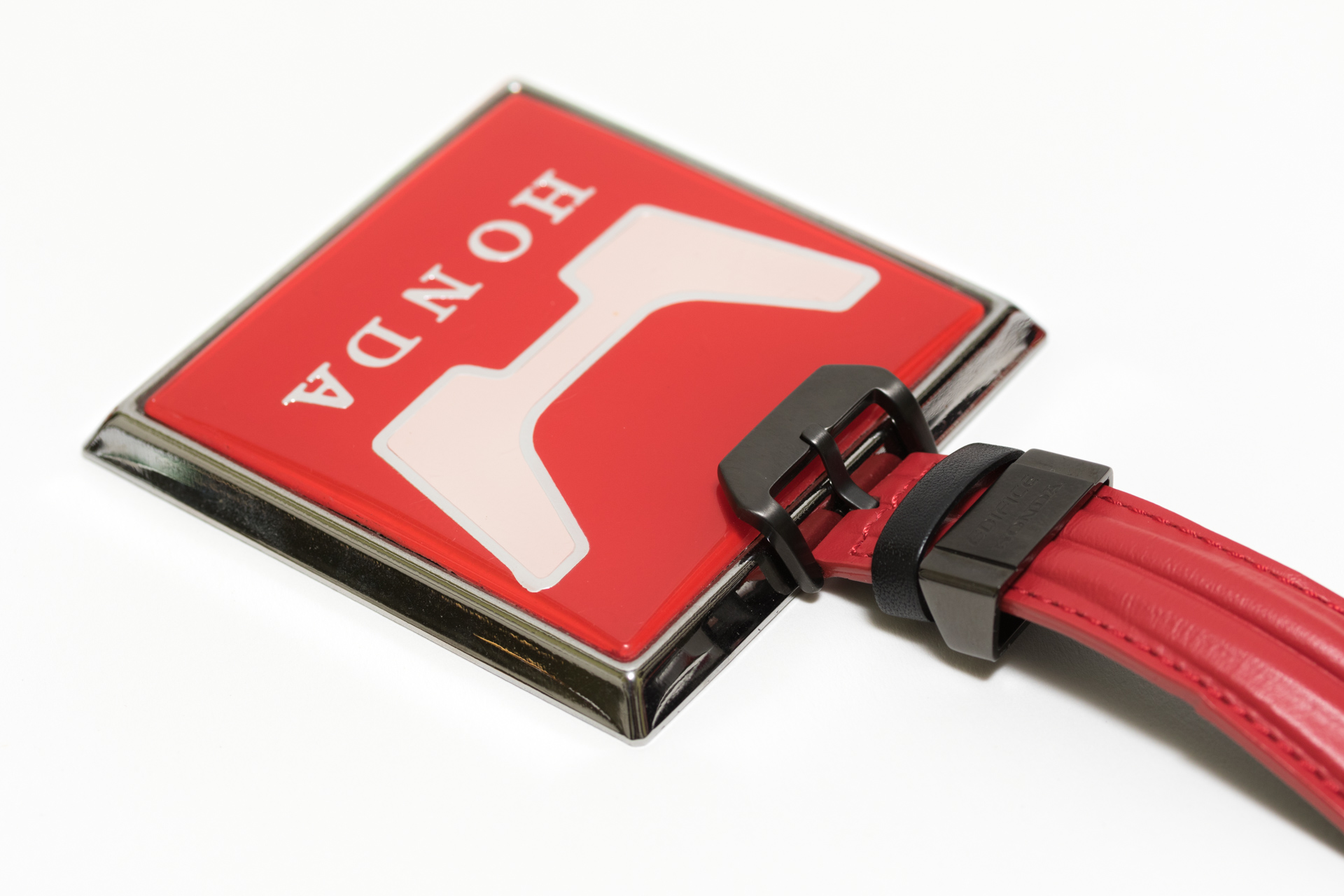 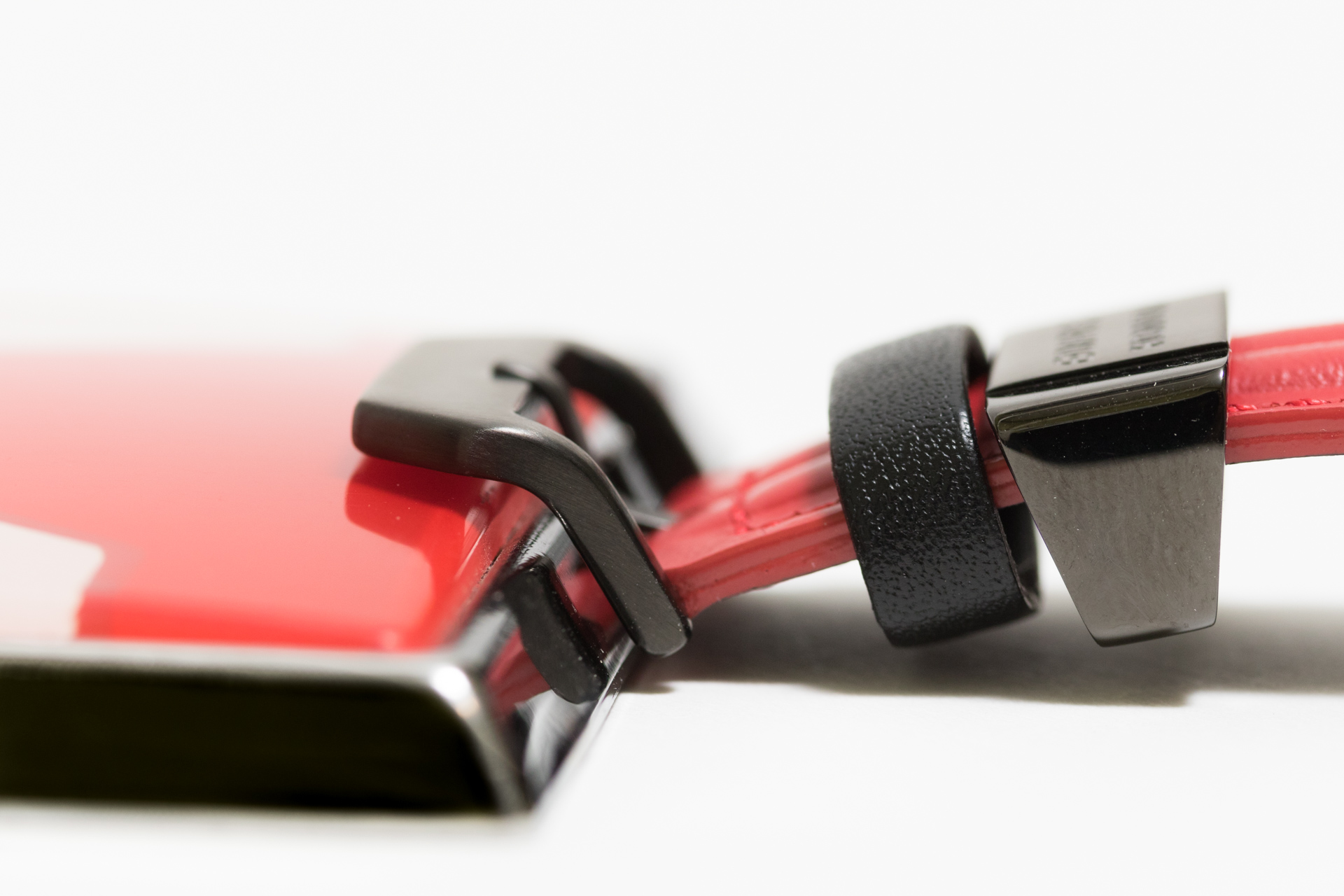 I might be inclined to go for the stainless steel version with the rubber strap, as it makes more sense for a sports watch and because a high-contrast black watch with a Honda Racing red strap isn’t for everyone. That said, compared to a G-Shock, it’s way more subdued, has a much more svelte footprint, and is more daily-wear appropriate with proper EDC functions.

While we’re on the subject of svelte and comfortable, I want to emphasize the finish of the buckle, as it’s one of the nicest-feeling on the wrist and the leather strap should last longer due to Casio’s detail in giving the buckle an angled bend and for rounding off the inside of the buckle where the strap usually folds over itself to release the horn. In fact, I liked the feel of the leather strap so much I decided to take a quick look at the Edifice website and found another model with the same lug design with a brown leather strap, which could look nice accented against the gold and black, for $84.00! This basically screams, “Buy the strap, get a free watch head.” 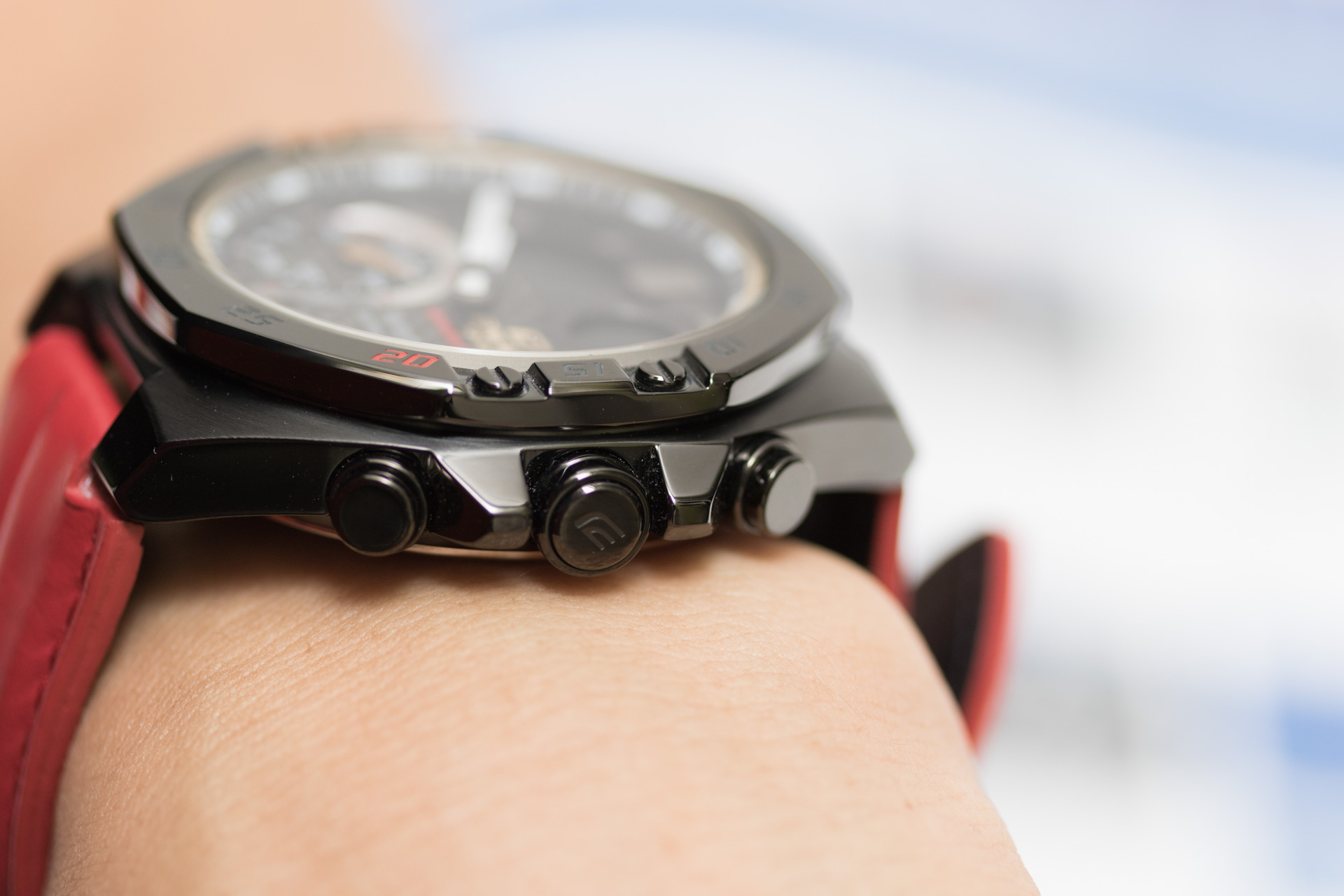 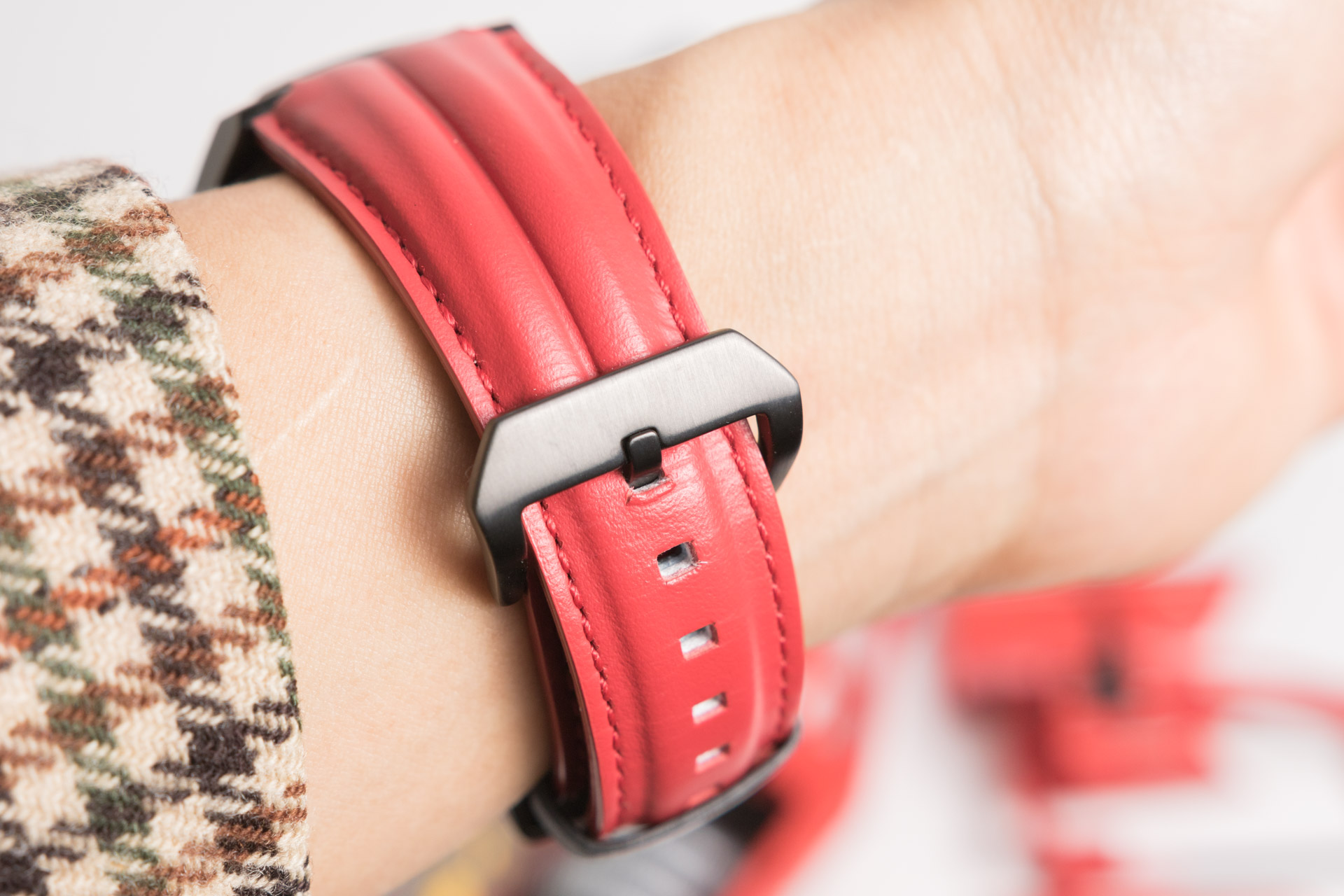 This watch has a lot of technology built into it, yet the dial is one of the more subdued within the Edifice brand. Nonetheless, it packs digital functions that can be used daily and keeps you connected to larger events within your day. I personally ended up using the calendar sync, auto-illumination, hand shift, timer, and hour signal the most. I would have used the alarm function more often had it allowed me to set alarms on separate days versus a global setting for every day. 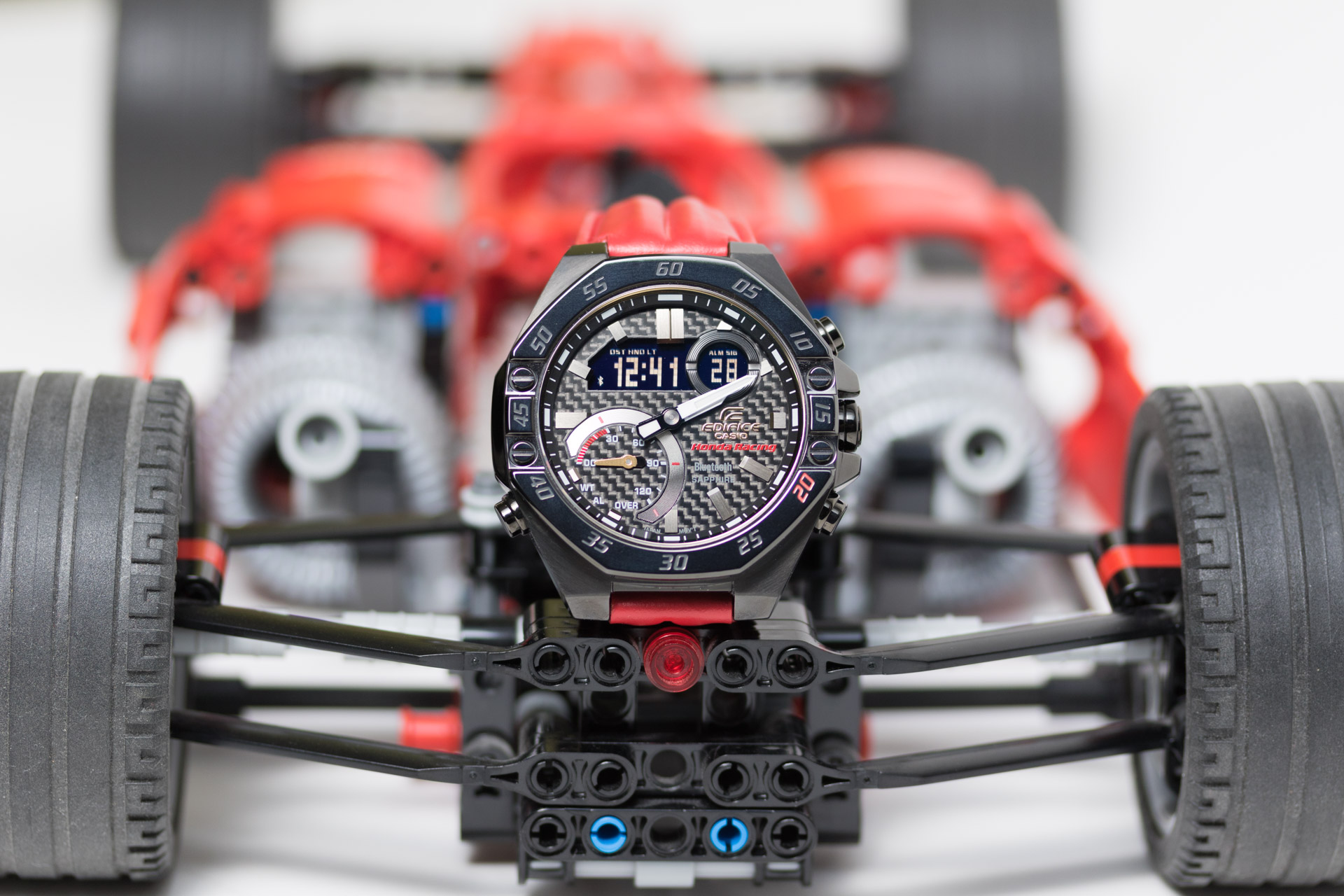 While the G-shock brand may have Supreme-like inflated prices due to its street-cred hype (which isn’t to say it’s not warranted, at times), the Edifice line comes in at a reasonable value for having as much, if not more, technology and features, much like Vans. So, when you’re over the A-lister hype and sick of Chris in all his G-Shock, Shock Resistant Thor bravado, slap on a nice everyday Liam for a well-balanced, Gale Hawthorne digital watch experience that only comes with “Intelligence and Speed,” topped with a dollop of Hunger Games.

The Casio Edifice Honda Racing Limited Edition is priced at $330. You can learn more about this watch and other Edifice models at edifice.casio.com.

Necessary Data:
>Brand: Casio
>Model: Edifice Honda Racing Limited Edition
>Price: $330USD
>Size: 51mm tall lug-to-lug, 48.8mm-wide case-to-crown, 13mm-thick
>When reviewer would personally wear it: Motoring events and everyday wear. No high-board diving and scuba diving, as its only good for 10 bar.
>Friend we’d recommend it to first: Value-conscious friend interested in the functions and pragmatism of a G-Shock but turned off by the looks. Also an enthusiast of the following in any combination: Honda (Mugen, Type-R, HRC), motorsports, stealthy sports watches, and someone with a lot of calendar appointments.
>Best characteristic of watch: Comfortable and stylish case. Straight forward app with a nice user interface and experience.
>Worst characteristic of watch: “16mm” proprietary strap and the fact that there’s a Tom’s Racing LE version we can’t get in the states.