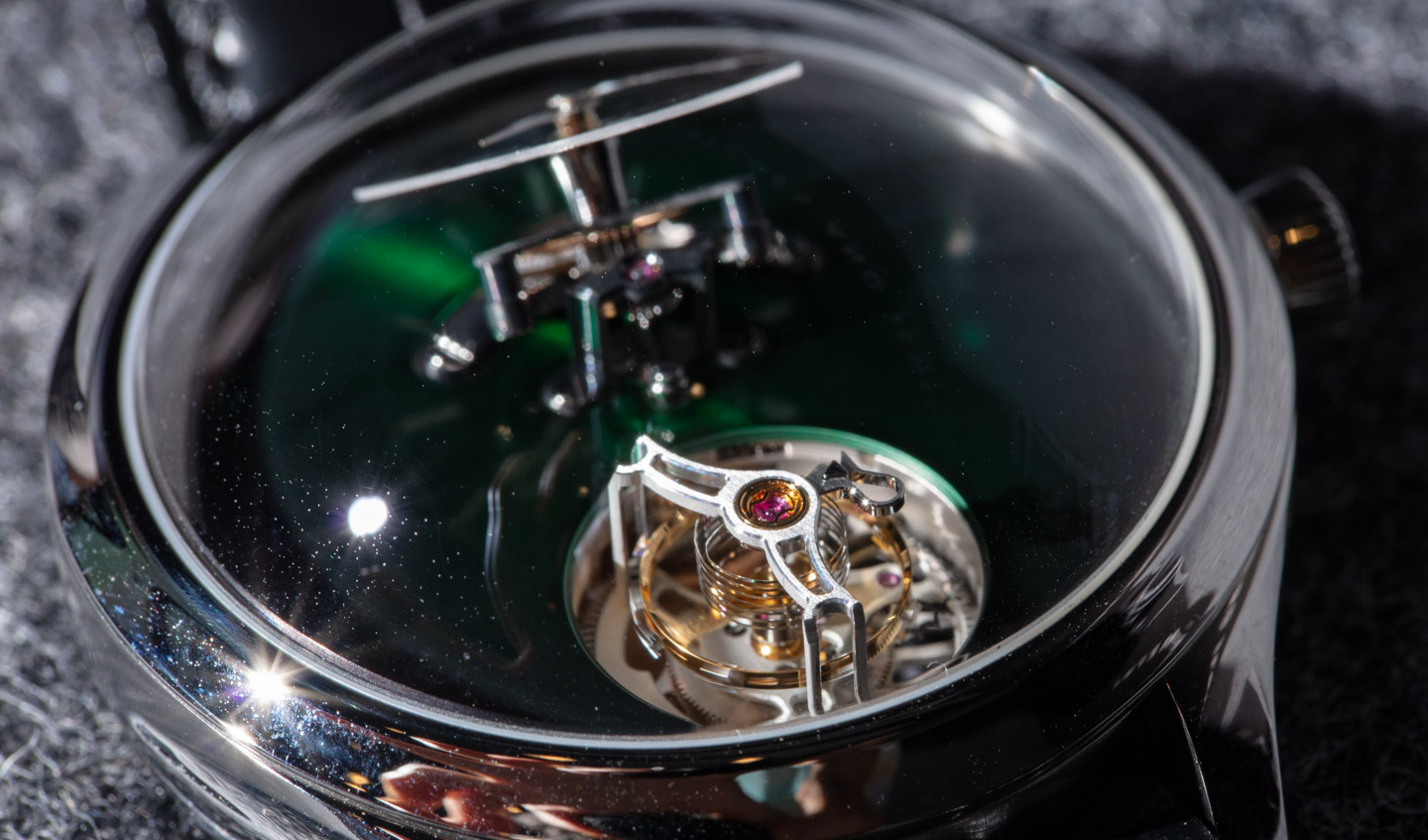 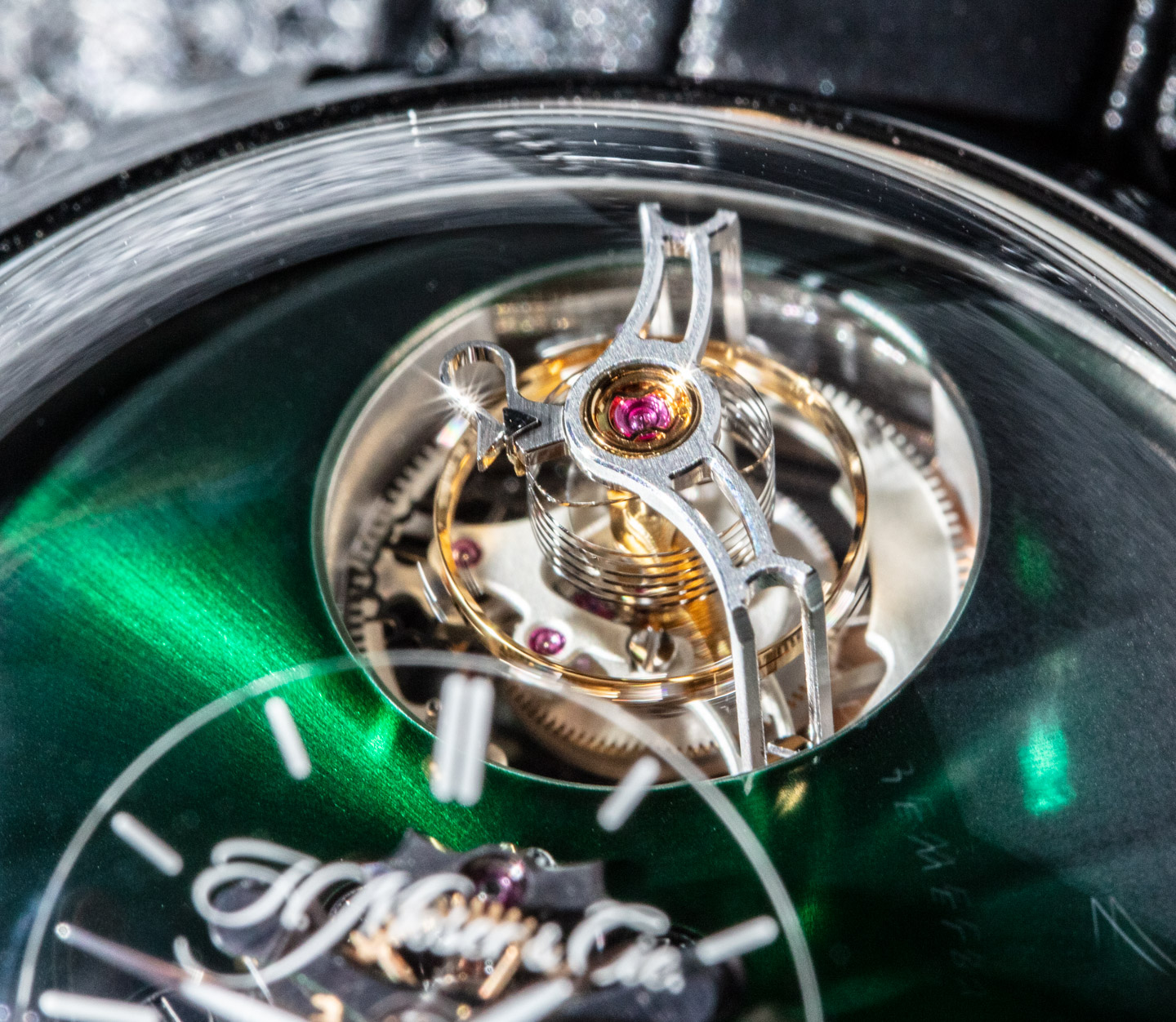 Max Busser (founder of MB&F) is the father of contemporary high-end wristwatch collaborations. Today, aBlogtoWatch takes another look at one of his more recent collaboration watches — with H. Moser & Cie, nicely combining their joint talents. This is the green-dialed version of the H. Moser & Cie X MB&F Endeavour Cylindrical Tourbillon limited edition watch that debuted in 2020 (on aBlogtoWatch here) and is part of a set of 15 pieces per dial color (of, I think, five dial colors).

The watch is very much a combination of both parts and design elements from MB&F and H. Moser & Cie. For this design exercise, it is H. Moser & Cie that got the main title credit, probably because the watch is mainly being sold as an H. Moser & Cie product in sales and distribution terms. That is one of the most interesting things to consider as collaboration products continue to mature and penetrate the market: How are collectors supposed to even mentally categorize these often-marvelous timepieces? In this instance, it seems that MB&F and H. Moser & Cie were able to come to a friendly agreement about name-sharing, but this liberality is not common in the watch industry space. Most of the time, companies jealously like to hide the companies that help them produce their products — even though the Swiss watch industry really wouldn’t be anywhere without its complicated web of collaborative relationships and efforts. 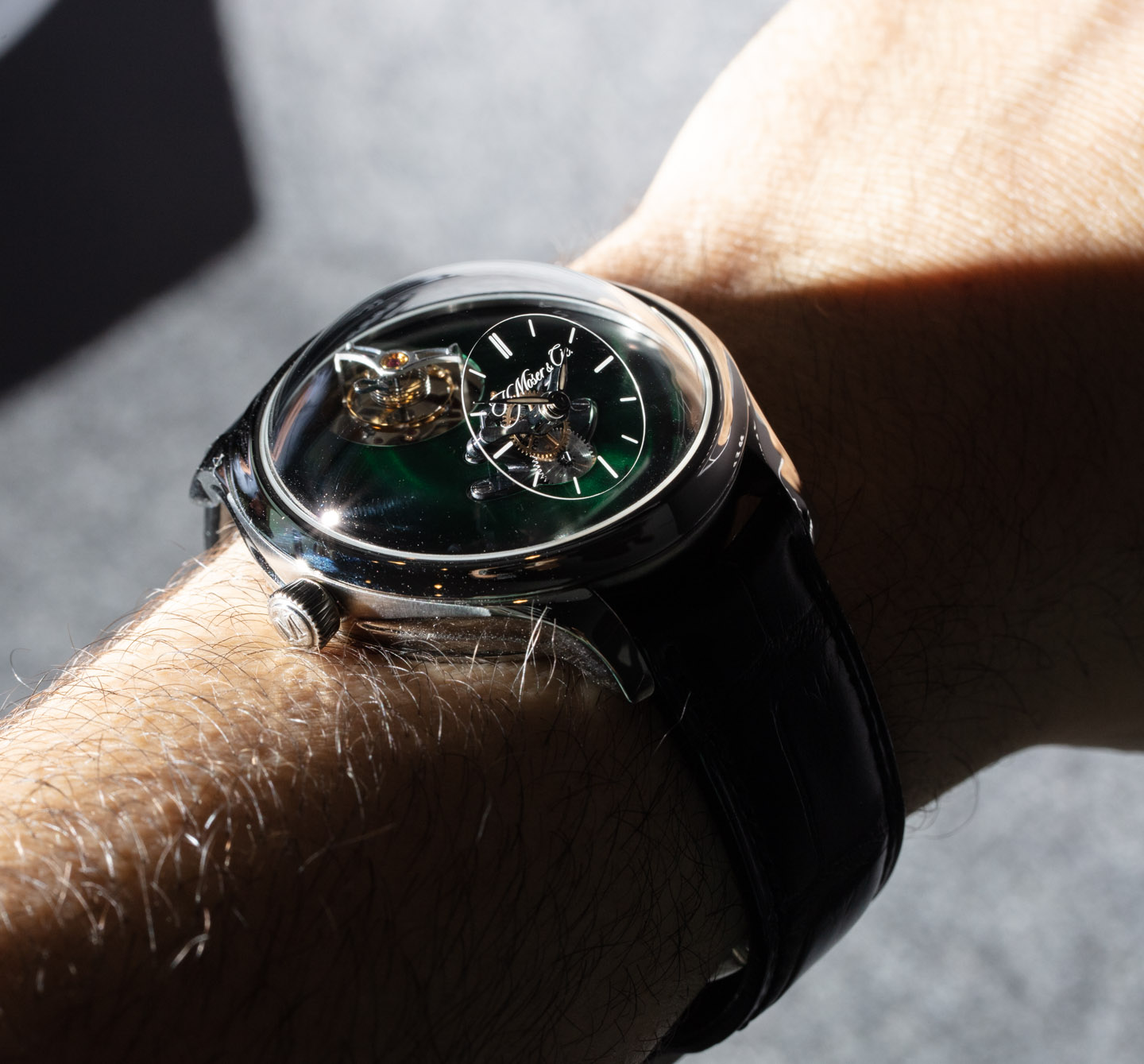 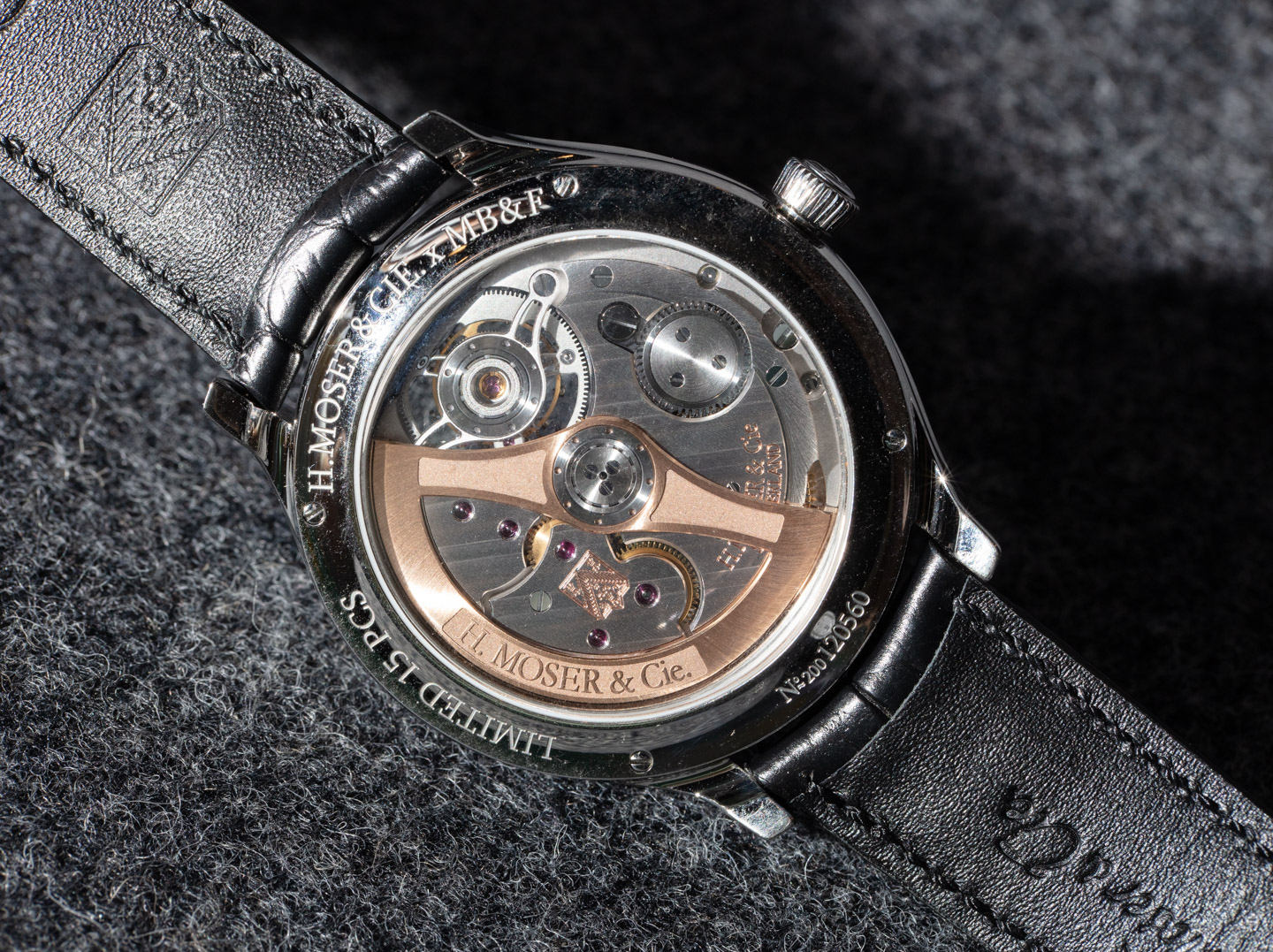 Studying Max Busser’s legacy of collaboration watches could really fill a book. It started while he was at Harry Winston when he developed the Opus series. It was a collaboration between Harry Winston and one independent watchmaker/designer per product. Harry Winston produced 14 Opus watches before the concept was canceled soon after Harry Winston was acquired by the Swatch Group. MB&F itself is meant to be a collaboration brand (“Max Busser & Friends”), with Busser taking the bold step to promote those people who helped his luxury products come together — as opposed to hiding them. MB&F has a rich history of collaboration and art watches that thoroughly celebrate other personalities. Putting on his museum-curator hat, Busser fully understands that MB&F is more powerful as a venue and as a platform, rather than a company that guardedly defends the “we do everything ourselves” line of argument.

In 2012, MB&F and Urwerk tried something new. They wanted to collaborate on a product, but they seemingly could not figure out if the resulting product should fall under the MB&F or Urwerk brand. So, the result was that they started yet a third brand called C3H5N3O9 — which is the chemical composition of nitroglycerin. That brand lasted for one watch and was always considered to be a true experiment. 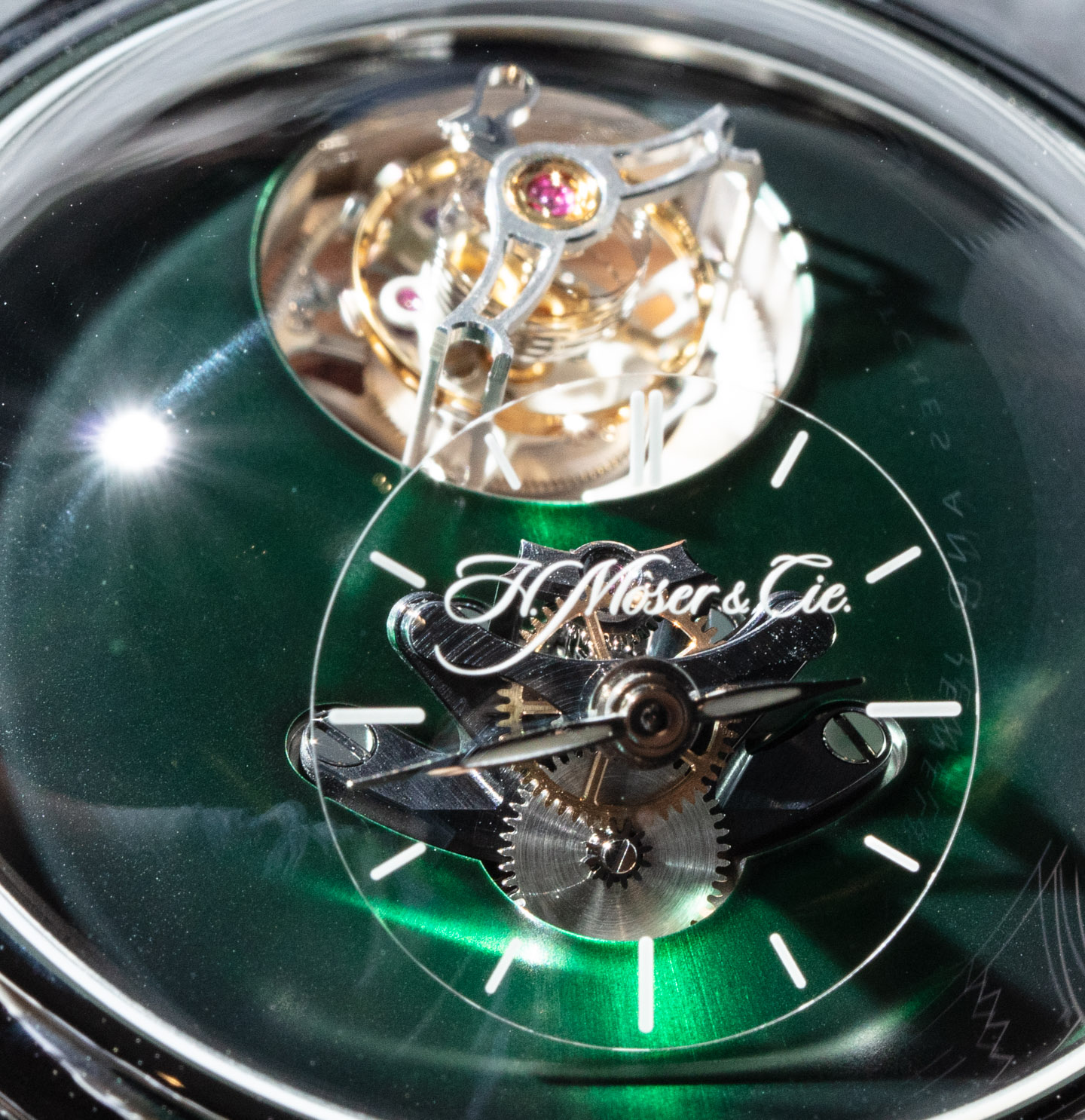 Returning to this Endeavour Cylindrical Tourbillon watch, I want to say that additional background information and coverage of the more accessible MB&F X H. Moser & Cie LM101 watch, launched at the same time, is available in the above-linked debut article. More so, note the large effort for these brands to play fair with one another. Rather than just come out with an H. Moser & Cie X MB&F watch, they also came out with an MB&F X H. Moser & Cie product. The pieces are thematically similar (different movements and prices, of course), but there was an effort to share who gets top billing in the product titles. 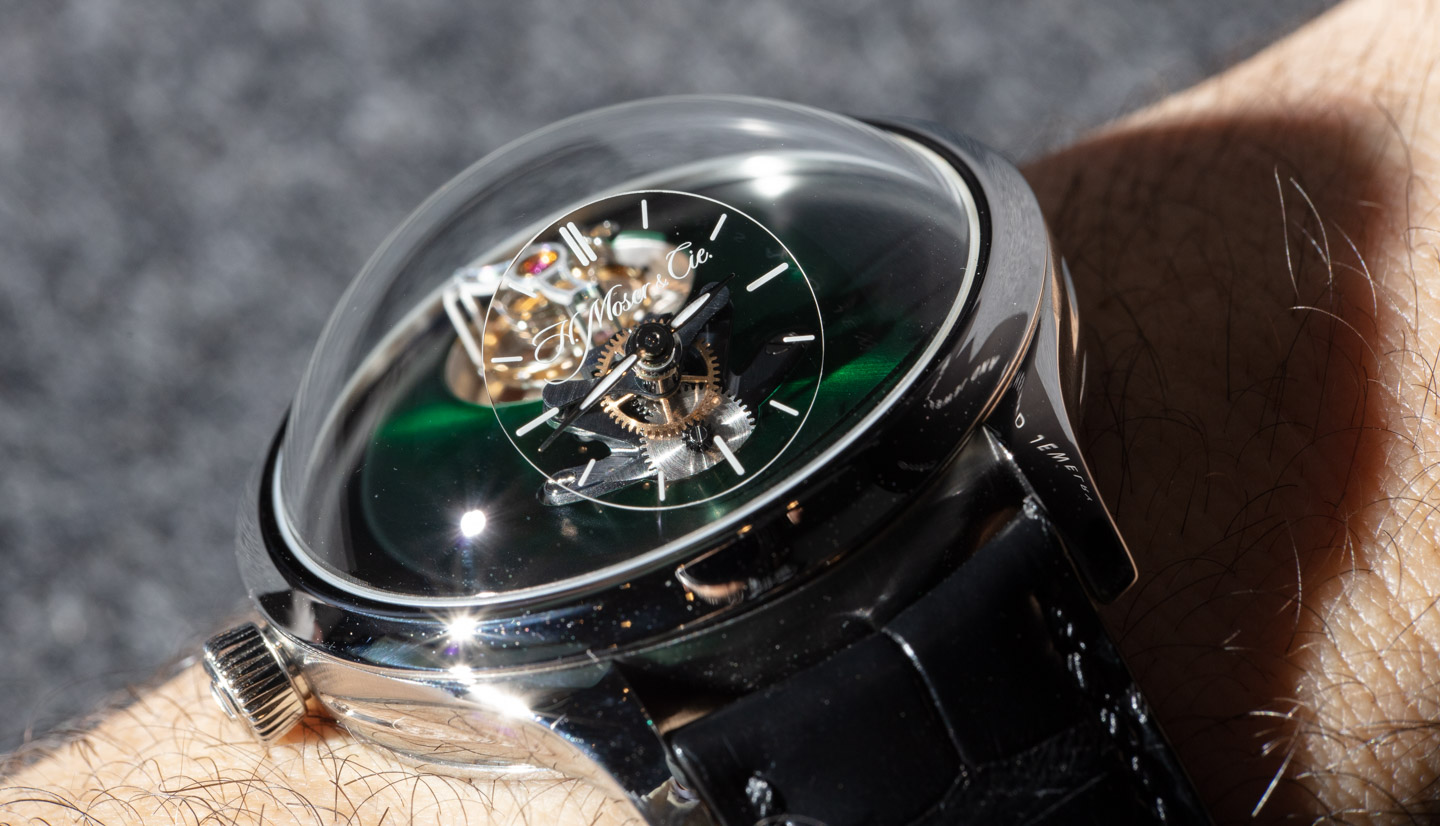 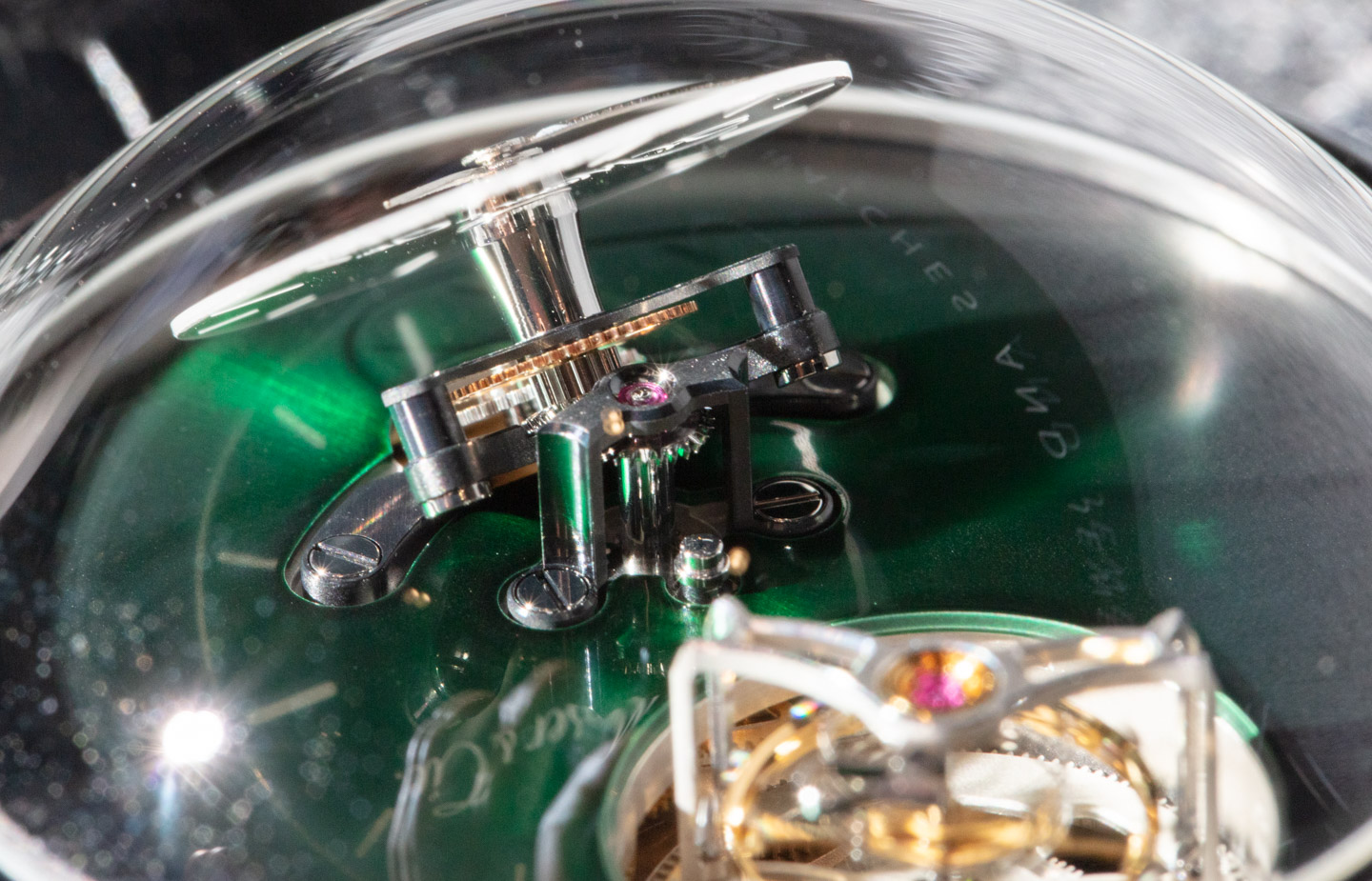 The H. Moser & Cie Endeavour collection is where many of the brand’s higher-end pieces live right now, including the recently released H. Moser & Cie Endeavour Minute Repeater Tourbillon. The case of the Endeavour Cylindrical Tourbillon is in steel (collectors prefer steel to precious metals much of the time, these days) and is 42mm-wide on the wrist with a highly domed sapphire crystal. The dials represent one of H. Moser & Cie’s most popular design elements: “fume” effects where one color changes to another color through a gradient. This is often from one color to black or a darker color of the lighter tone toward the middle of the dial. In true H. Moser & Cie form, the dial is left mostly bare with just an opening for the complicated flying tourbillon assembly and the upwards-tilted dial for the time. 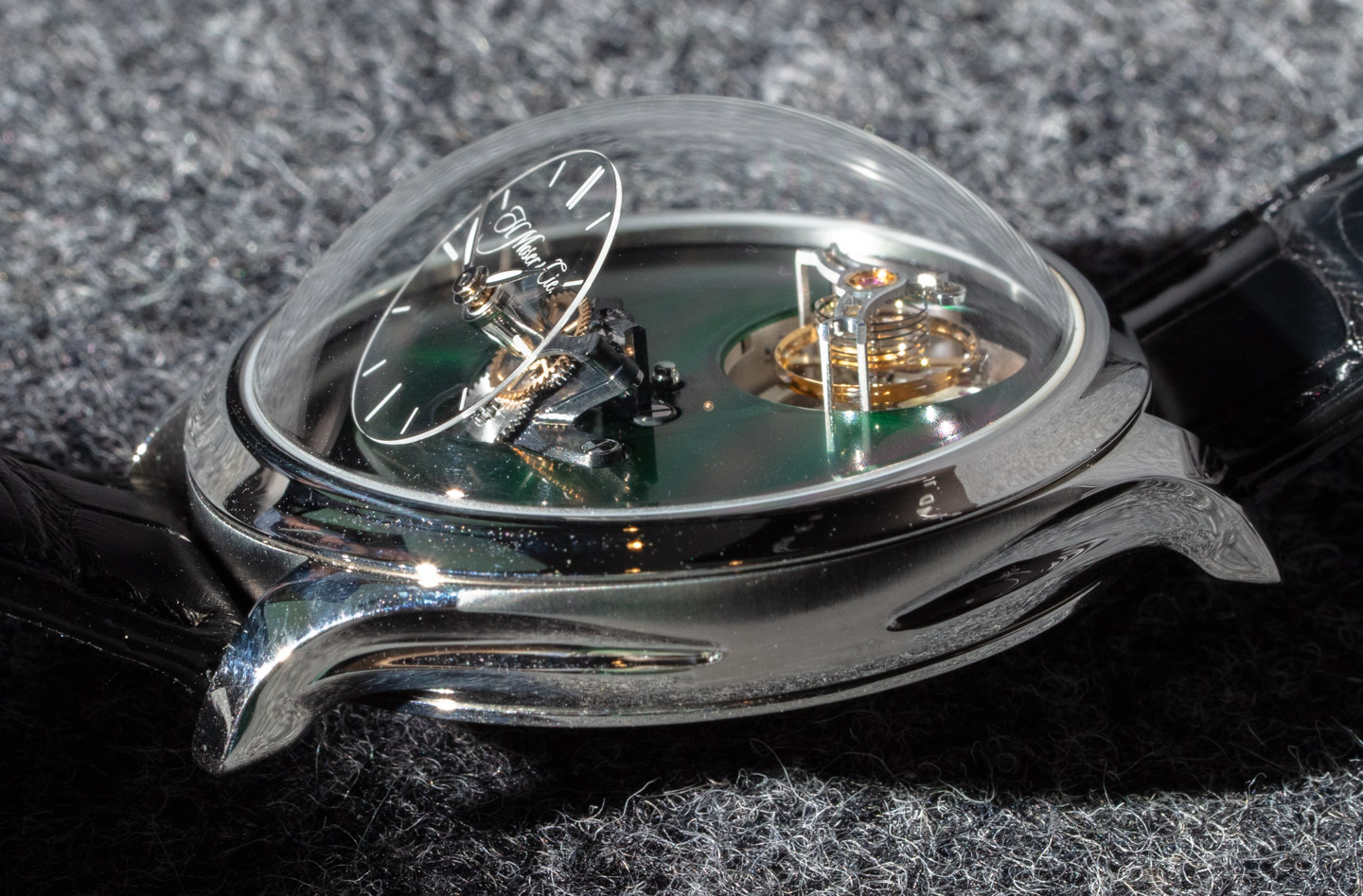 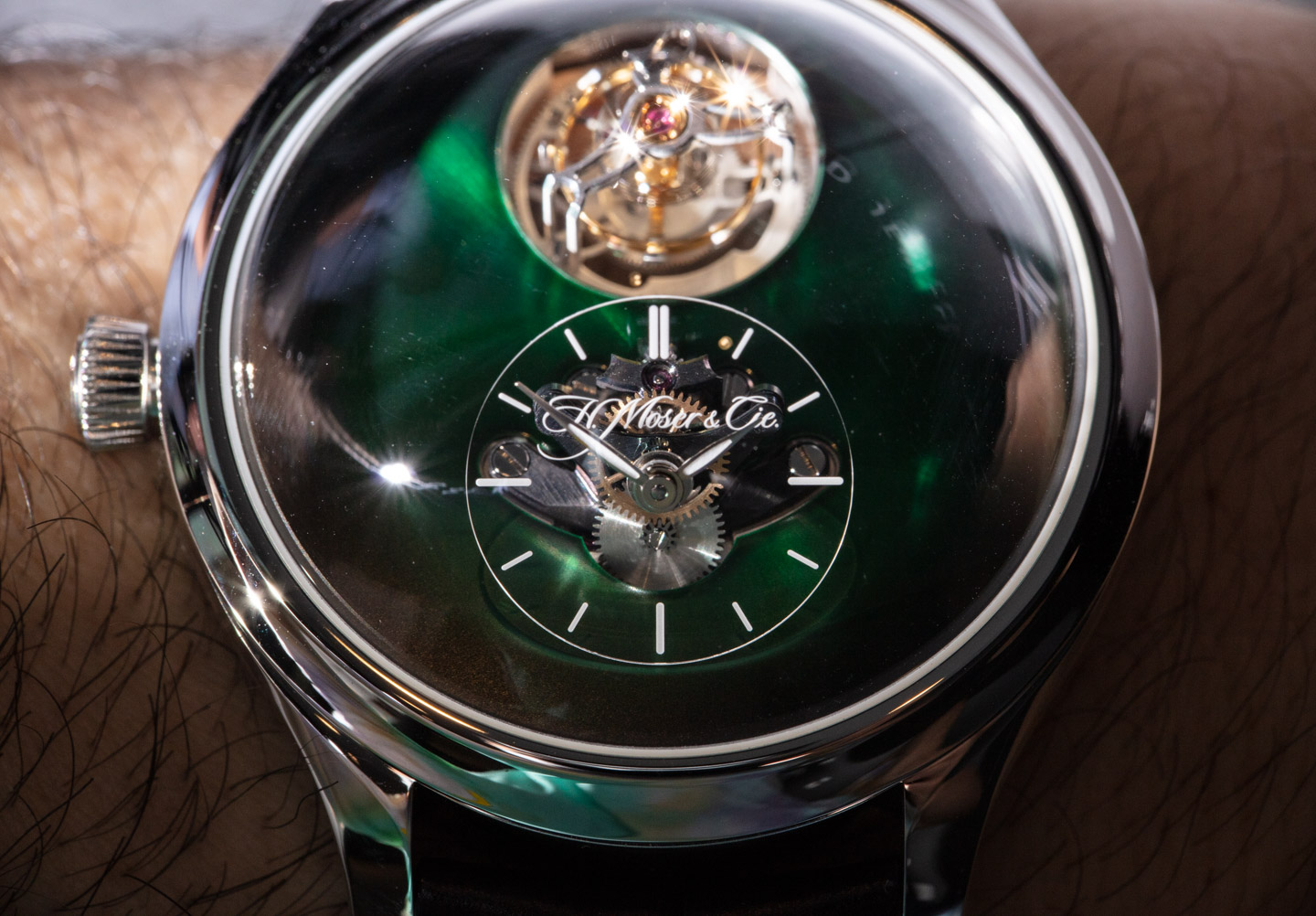 Both MB&F and H. Moser & Cie share some movement part suppliers, which is one reason why making such collaborative products is possible. Even though this watch contains complications featured in other timepieces, their precise combination (or rendering) is distinctive for the Endeavour Cylindrical Tourbillon series. The movement inside the case is known as the H. Moser & Cie HMC 810. Its closest analog is the MB&F Legacy Machine Thunderdome (aBlogtoWatch hands-on here), which also has a tilted dial for the time and utilizes a cylindrical balance wheel as part of the tourbillon assembly. The MB&F Legacy Machine Thunderdome is manually wound (not automatic like this H. Moser & Cie), and given the more complicated movement of the tourbillon (it rotates on a few axis points), as well as the platinum case material — it costs close to $300,000 USD, much more than the still luxury-priced Endeavour Cylindrical Tourbillon we see here.

To simplify the Thunderdome concept, the HMC 810 movement uses a more traditional single-axis flying tourbillon (it removes the large dial-mounted bridge) but retains the use of a cylindrical (versus flat) balance spring. The movement operates at 3Hz and has 72 hours of power reserve. It is also an automatic, with the signature look of an H. Moser & Cie timepiece when viewed through the rear of the watch. 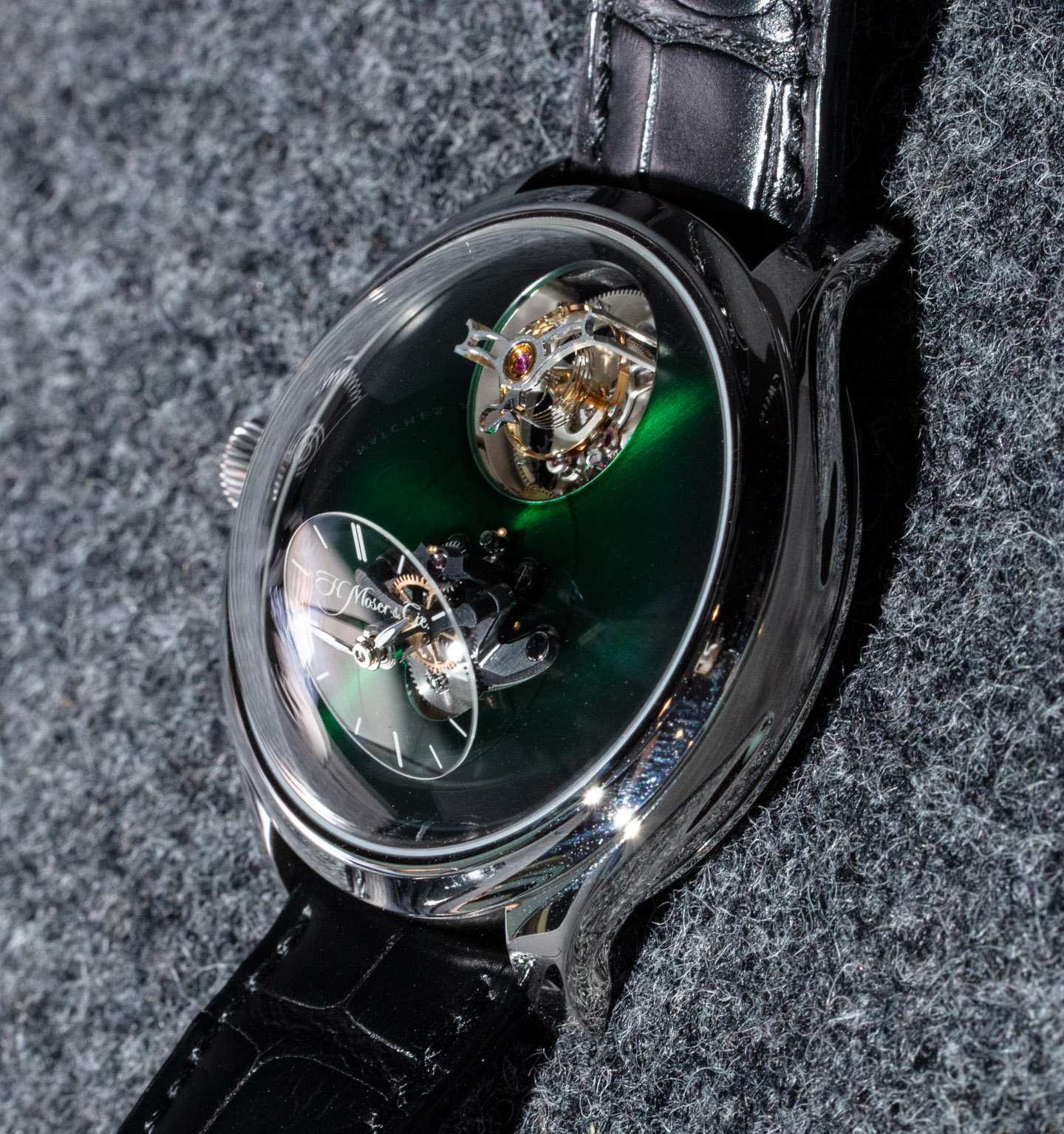 The most eye-pleasing part of the dial design is the use of a sapphire crystal for the dial that indicates the time. Over it is printed the H. Moser & Cie logo, as well as hour markers. The dial was to allow the user to read the time, but also for the powerful colors of the watch face to take center stage. I’d say the result was pretty lovely. Another small quirk of the design is that the crown is placed on the left side of the case – versus the right side of the case (as is most common). I suppose that makes this among the rare “lefty tourbillon” watches out there.